Bosnia and Herzegovina failed during the week to qualify for UEFA Euro 2020, losing in their play-off shootout against Northern Ireland. Dušan Bajević’s men played out a 1-1 draw on the night but were beaten 4-3 on penalties. They now need to bounce back to revive their hopes in the Nations League after failing to win the opening two rounds in the group. Bajević’s side began with a 1-1 draw against Italy but were beaten last time out by Poland. They needed a response in this game.

Netherlands began life after Ronald Koeman with a win against Poland in their Nations League Group A1 opener. However, they lost their second match against Italy and were beaten by Mexico in their first game under former Ajax manager Frank De Boer. The new manager has talent aplenty at his disposal, but Oranje had to prove a point to get back on track in the Nations League.

This tactical analysis will give an insight into both teams tactics. As will this analysis provides a deeper insight into the game between Bosnia and Herzegovina and Netherlands.

The home side deployed a 4-1-4-1 system to combat the Netherlands. It was a rather weakened side due to Bosnia going the full game, the extra time and penalties during their EURO 2020 qualifier. In total, Bajević made six changes from their defeat against Northern Ireland. The likes of Asmir Begović, Arsenal left-back Sead Kolašinac and Edin Džeko were drafted to the bench. This gave some players a good chance to impress the head coach. 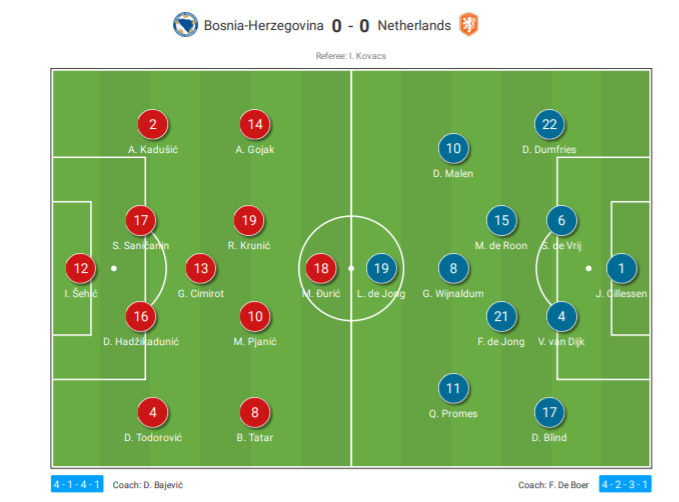 De Boer was even more radical and made eight changes to his team from their defeat to Mexico. Jasper Cillessen started between the sticks, Denzel Dumfries and Daley Blind got the start in the full-back positions. Only Liverpool midfielder Georginio Wijnaldum retained his place in midfield as Frenkie de Jong and Maarten De Roon were recalled. Luuk de Jong led the line supported by Quincy Promes and Donyell Malen.

The term ‘totaalvoetbal’ refers to the constant position exchanges between all the outfield players during a teams offensive phase. The Dutch were the founders of this concept. Decades after the introduction of it, the Dutch still embody this type of offensive football style. The game against Bosnia showed us this.

The example below shows the structure Netherlands played in. Most of the time they would occupy the space between the lines with five players. Thus have one player in each vertical lane. With constant exchanges of positions, De Boer’s men looked to confuse Bosnia’s low block. Below, Blind pushes up to stretch Bosnia’s last line whilst Frenkie de Jong moves to the half-space and Promes is available as a back pass option. Consequently, an overload is created on the side of the field. 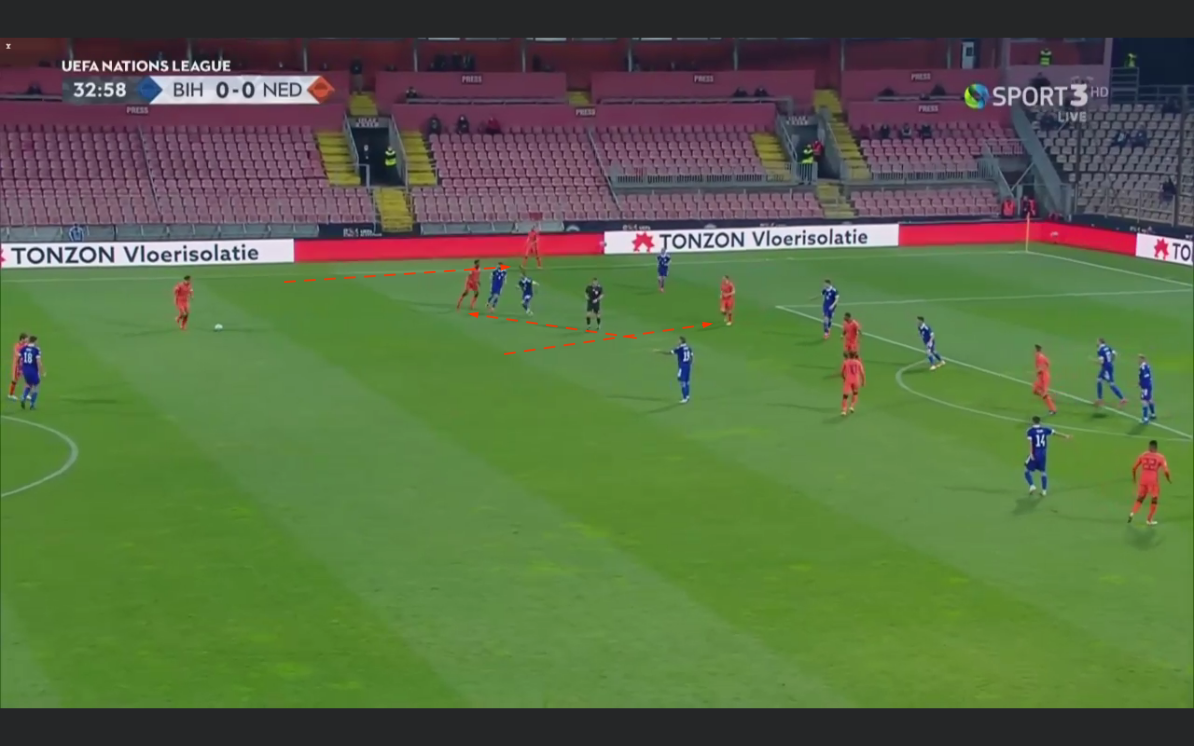 Above we spoke about how they would create the free man and some interesting concepts came from this position interchanges. Mostly dropping movements were used to create space between and behind the opposition’s lines. In the below image, we can see a third man combination through vertical dropping movements, diagonal passing and vertical runs from deep. Dumfries receives whilst De Jong drops and creates space behind the last line, centrally. This gives Malen the opportunity to penetrate this space. But with the lack of urgency, this failed to happen. 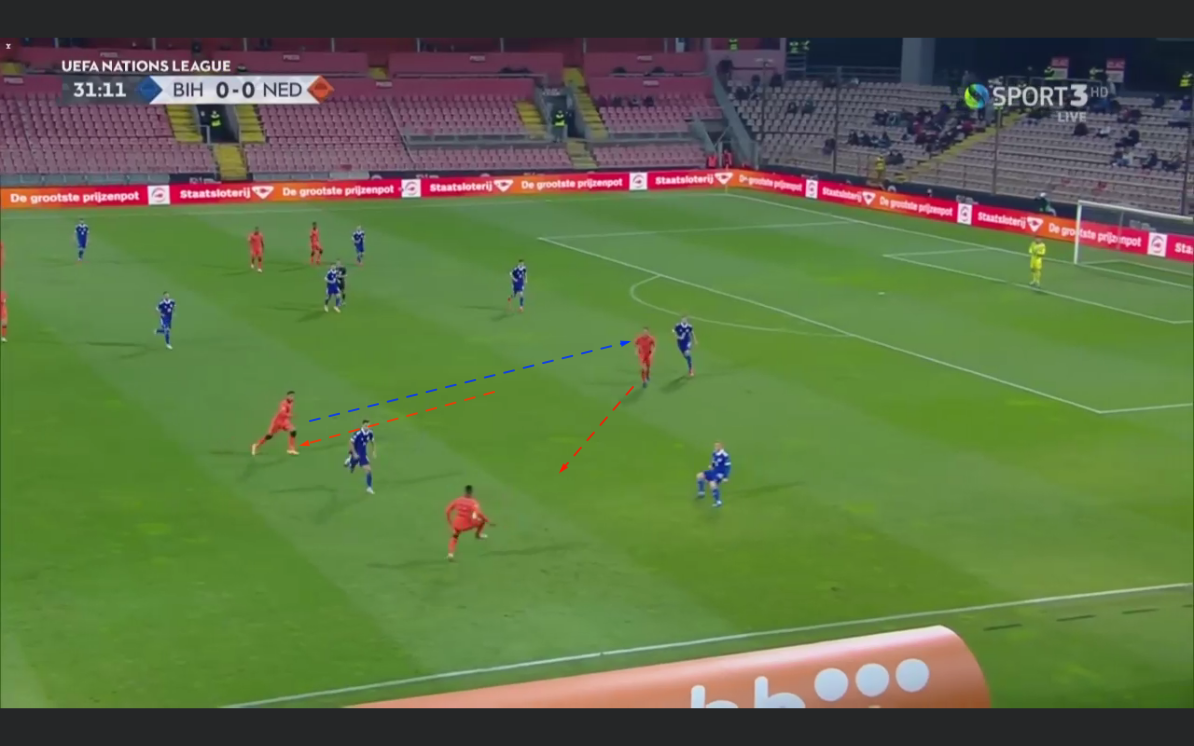 Another great concept is shown below. The ball is on the side, whilst Promes make a run into depth in the half-space. This gives Luuk de Jong the opportunity to drop and receive between the lines whilst Frenkie de Jong makes the third run in the space Promes has left. 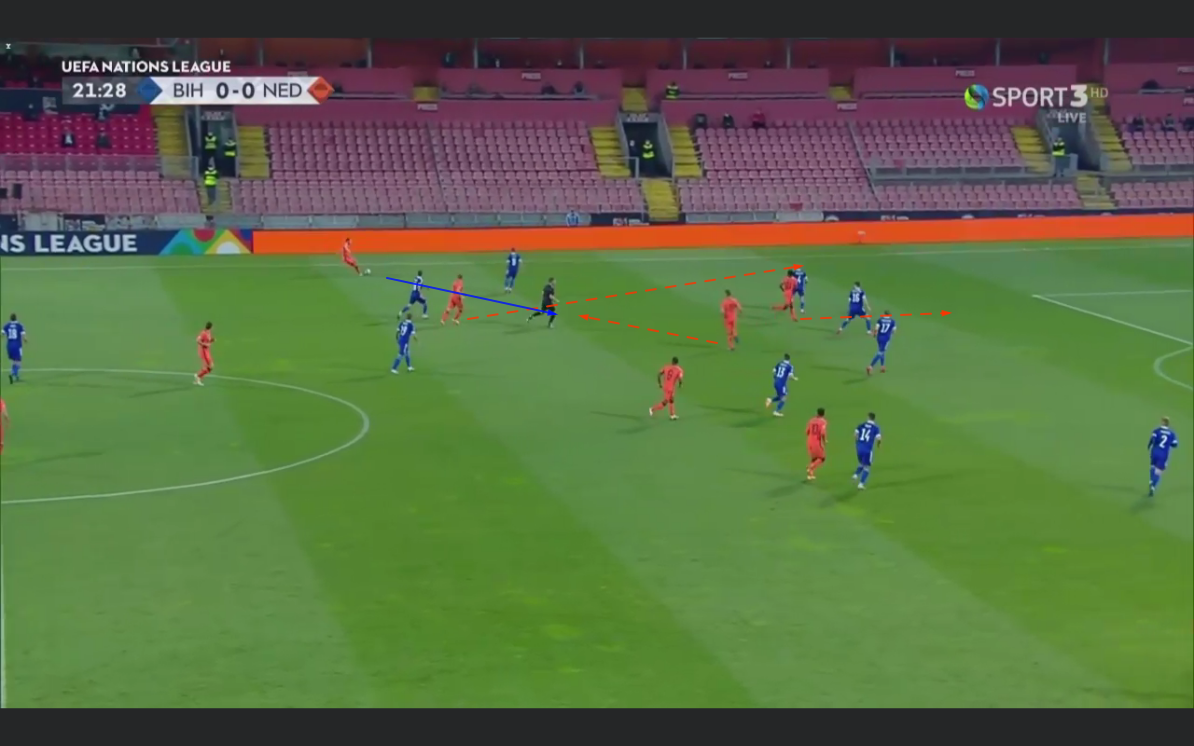 Thus they created mostly the overload out wide to deliver a cross from there and due to Oranje’s qualities in the box we can understand why. Luuk de Jong’s big strength is in the air. Thus he runs from the far defender’s blindside to the first zone in order to surprise the defenders when a cross comes in. Also, Wijnaldum’s runs from deep are an advantage. As the wingers also choose a position in the penalty area, the away side have enough men to be dangerous on any ball arriving into the penalty area. But due to Bosnia’s heroic defending and the lack of quality of crosses, Bosnia could keep any danger out. 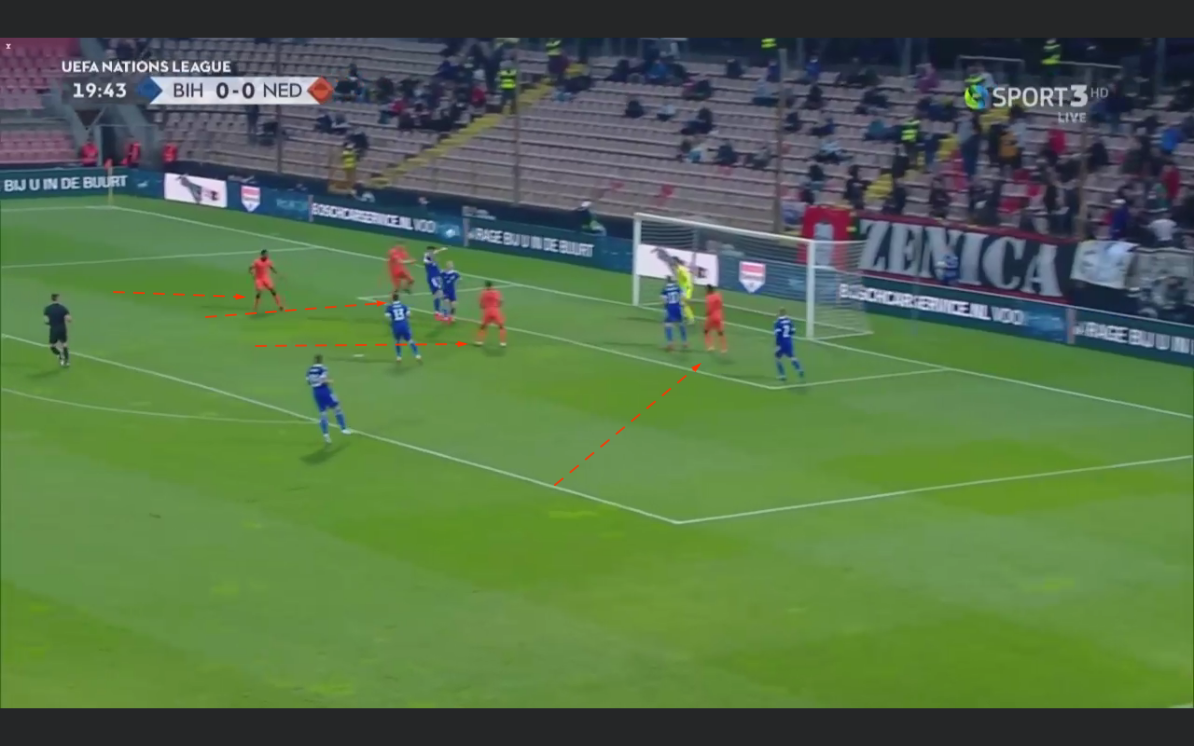 Džeko’s introduction: A world of difference

Bosnia struggled all game in the attacking area. The plan was to hit Oranje on a counter when they could. With Džeko benched, the responsibility to hold up the ball and act as a target man fell onto the shoulders of Milan Đurić. The Serie B striker struggled to do so against Premier League winner Virgil Van Dijk and Serie A defender Stefan de Vrij. Once Džeko entered the field, the game took a different turn.

When we look at the stats, especially at the duels, we can see a big difference. Đurić played a whole 60 minutes whilst attempting 17 duels but only winning six of them. In comparison with Džeko, in only 30 minutes he attempted more duels than Đurić. In total, the AS Roma striker attempted 20 duels, whilst winning 11 of them. In the below image we can see the importance of Džeko’s presence. 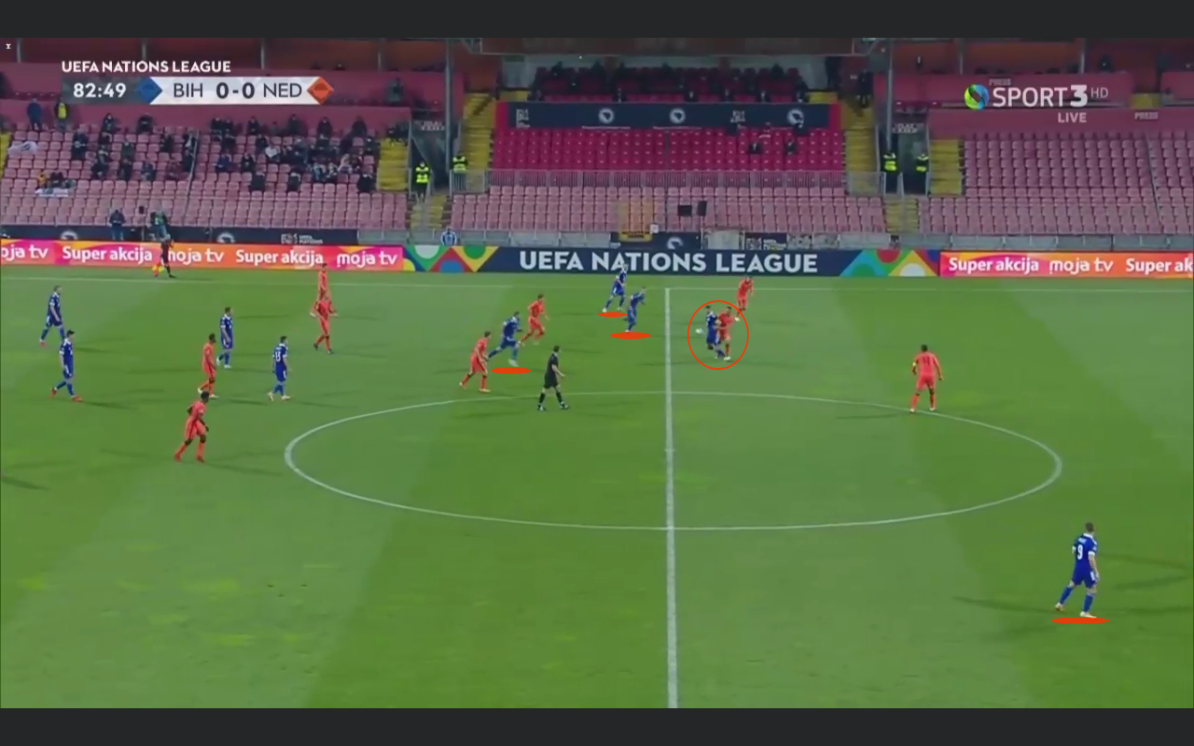 The advantage it gave Bosnia was immense. By holding the ball up, he gave his teammates the chance to push up. Even when he won a foul, the pressure was off for a moment as Bosnia had less of the ball. And of course with players making runs in behind, Bosnia were more of a threat on the counter in the offensive areas. Particularly when we look at the offensive duel stat. As Đurić attempted five and lost all of them, Džeko went for 11 offensive duels and won seven of these.

As Oranje had 69 per cent of the ball during this game, Bosnia had to have a solid set up to keep the goals out defensively. The game ended in a goalless draw, which indicates that the home side had a good setup. But also due to the Netherlands’ lack of penetration behind the opponent’s last line, the Bosnian defence could keep out Oranje.

The image below shows us the most frequent passing links this game. The dot size corresponds to the number of touches. The image clarifies that the most passes were between the two centre-backs, full-backs and pivot. 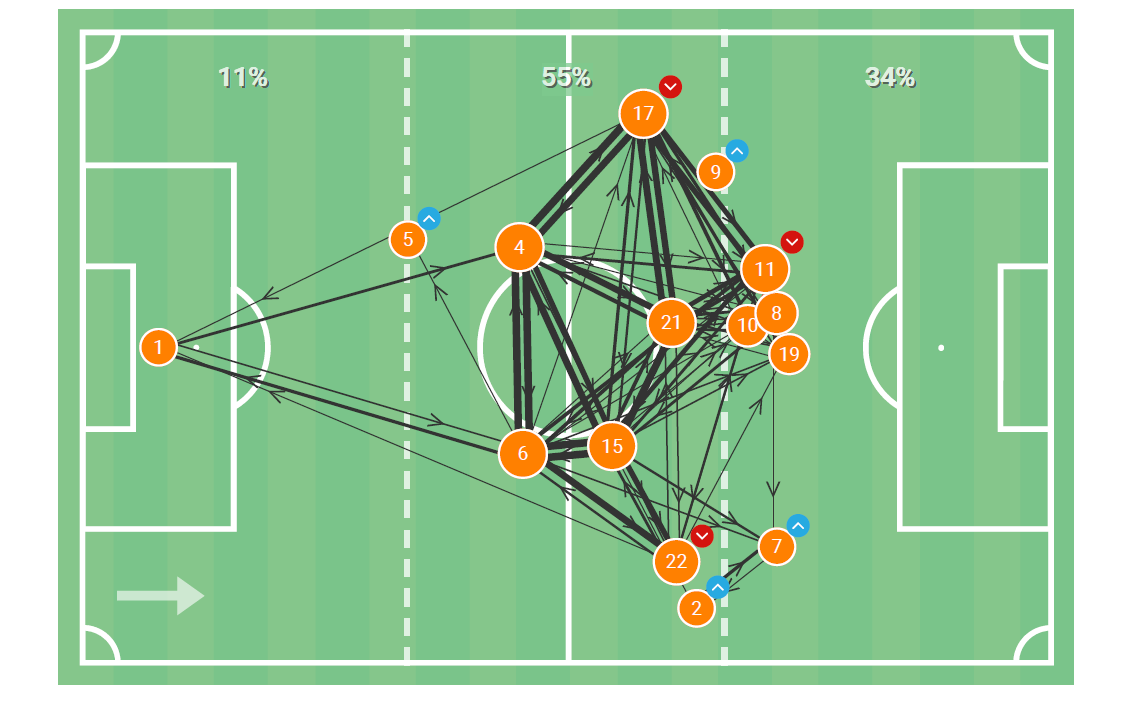 The stats also indicate Oranje’s lack of forward play. Over 300 passes were played lateral by the away side. This is almost double as many forward passes they played, which were at a total of 183. This sideways approach made it a lot easier to defend any danger from the Netherlands as the ball was moving in front of them most of the time.

Besides Oranje’s approach, the home side did make it difficult by implementing some basic principles to a decent degree. One of them is illustrated in the image below. They kept their shape very compact. During the 90 minutes, their block had a height of 37 meters and a width of 41 meters. This is of course measured during the offensive and defensive phase. 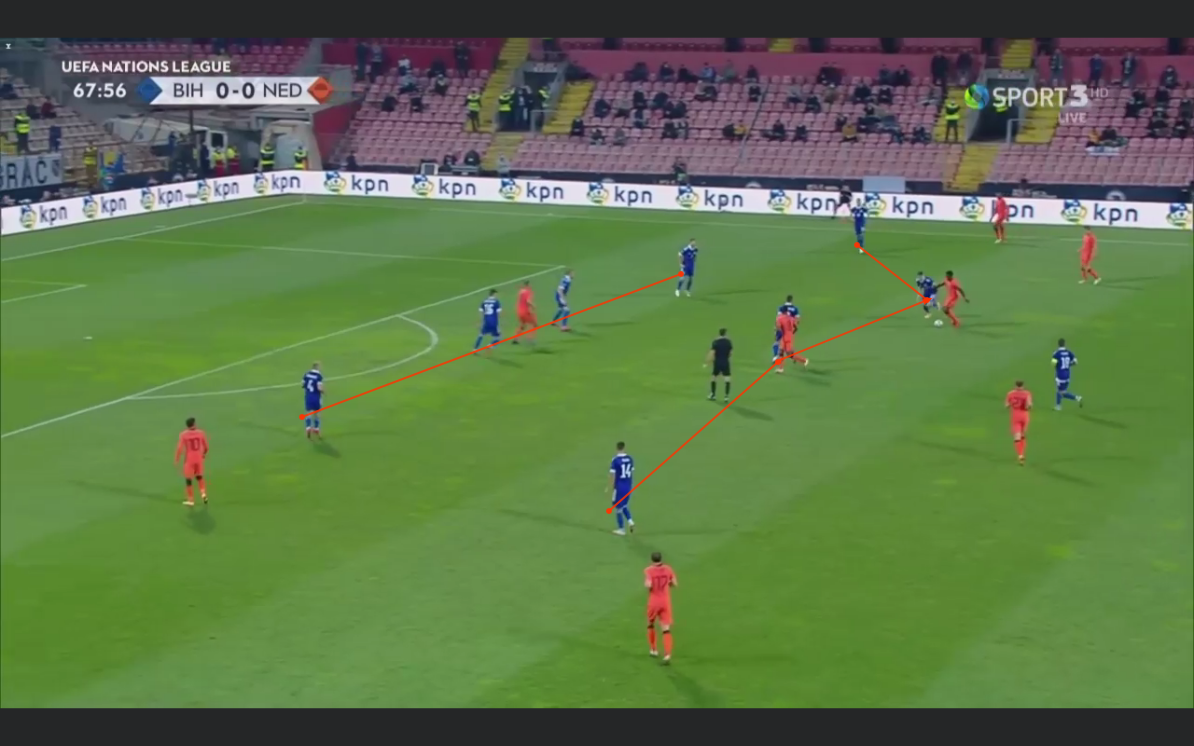 The game plan during the defensive phase was to not commit to any pressing until the ball was played to one of the sides. This meant that the centre-backs of Oranje had time and space to do anything. Unfortunately, this didn’t result in good ball progression. 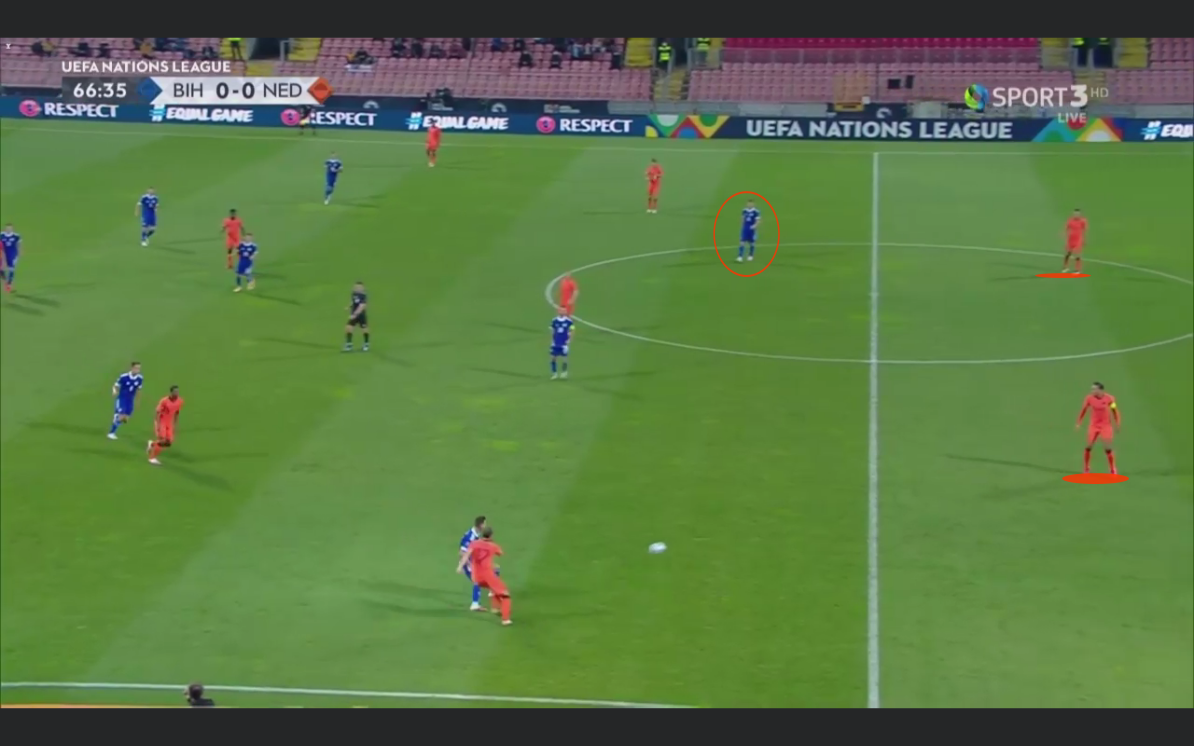 Why it didn’t result in effective ball progression can largely be explained by the midfield of Bosnia man-marking the opponent’s midfield as we can see in the below image. This made it difficult for the Netherlands’s centre-backs to find a passing option. The other option for the centre-backs was to penetrate the opponent’s block with the ball at their feet. But this didn’t happen too often. Which meant the home side’s block prevailed. 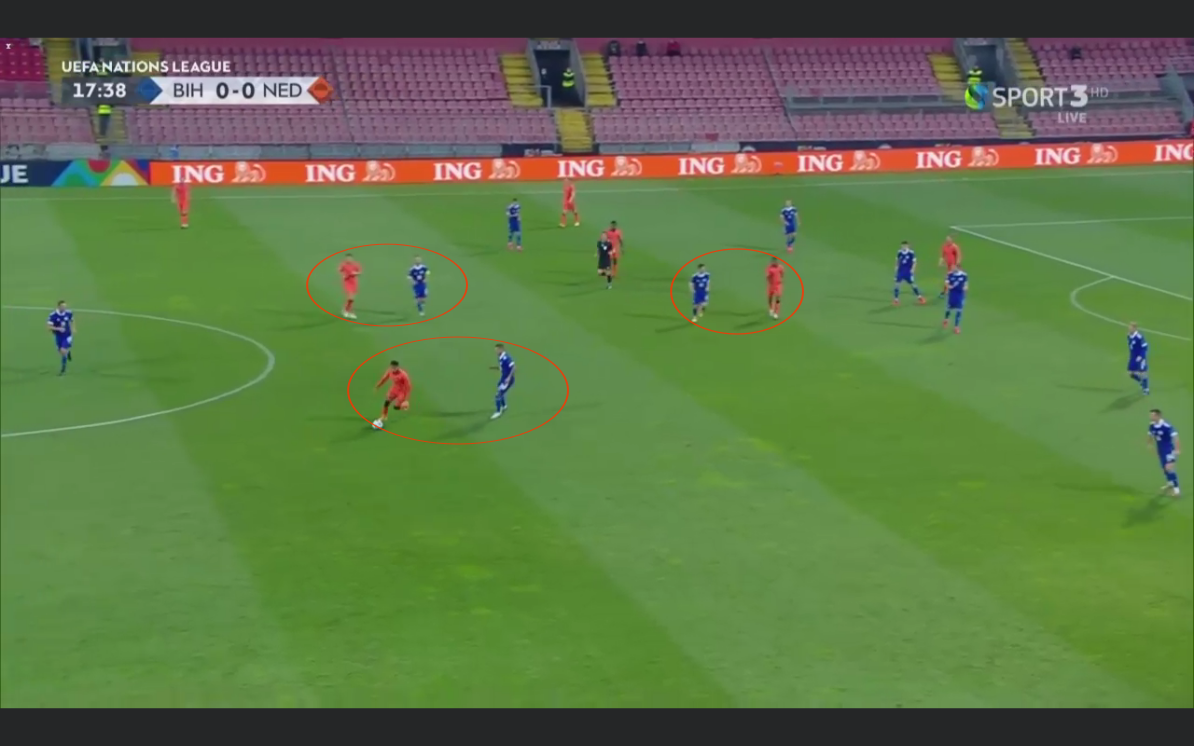 As Bosnia had to go all the distance against Northern Ireland a couple of days earlier, it was understandable they would struggle in the last part of the game. Although the Netherlands didn’t take advantage of this, as the game ended in a goalless draw. The concept of ‘totaalvoetbal’ is beautiful to watch when performed well but as De Boer only has a couple of days with his players to prepare for games, it is difficult to implement. The draw means De Boer is now under huge pressure for the game against Italy.