In game week five of La Liga, Barcelona take on rivals Sevilla, in what should be an interesting tactical affair between new Barcelona boss Ronald Koeman and ex-Spanish national team manager, Julien Lopetegui. The match will also mark the first return of Ivan Rakitic to the Nou Camp after he re-signed for Sevilla.

Ronald Koeman has begun his reign perfectly at Barcelona, having won 4-0 and 3-0 in his first two La Liga matches. He has looked to change Barcelona’s style, making them more defensively sound and changing their formation to a 4-2-3-1, with the hope that his tactics can also allow for an improvement in attacking areas, especially in breaking low blocks.

Sevilla performed brilliantly last season, having won the Europa League, a team built on new players as Sevilla went through a transition of change at the beginning of the 2019/20 season. This season they have a 100% win success rate, though, they had to count on late goals in both wins against Cadiz and Levante. Youssef En-Nesyrito was the hero last time out as they beat Levante 1-0. This tactical preview will provide tactical analysis with video analysis on how both sides could set up. 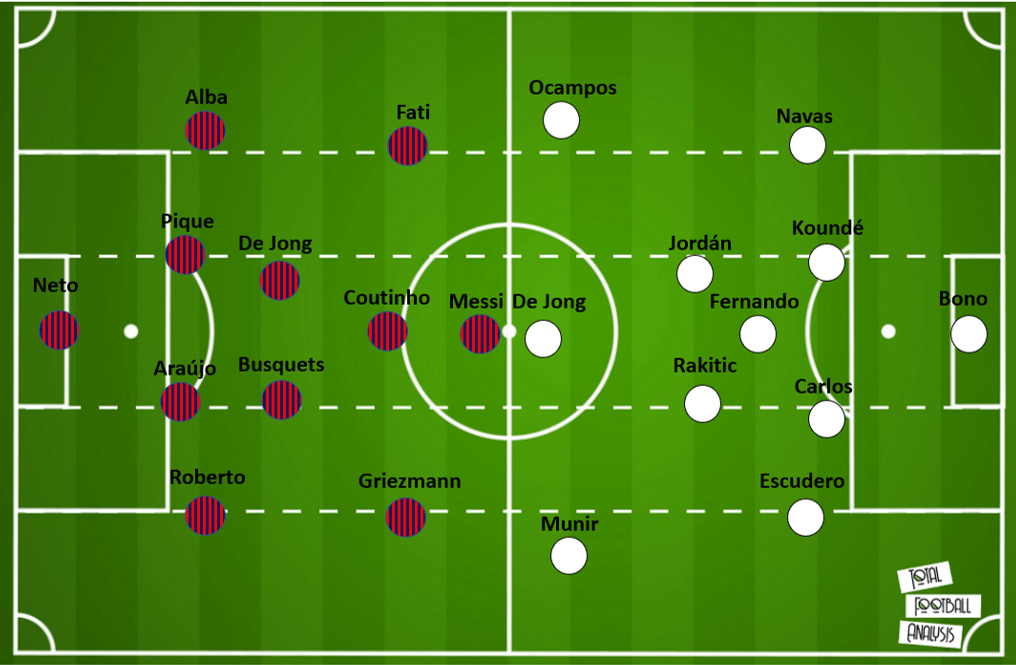 Ronald Koeman has kept a consistent team in the last two league matches, but that will have to make changes for the visit of Sevilla. Clement Lenglet received a red card against Celta Vigo and was replaced by youngster Ronald Araujo, he impressed in the second half and is likely to keep his place with Samuel Umtiti nursing an injury.

The rest of the side is likely to stay the same, Barcelona will have played their third game in a week; however, Koeman will not want to rest players against a strong Sevilla side. The only change that we could see could be on the right-hand side of midfield, Antoine Griezmann has struggled to contribute in attacking phases in the first two matches, and we could see Trincão or Ousmane Dembélé replace him.

Lopetegui is likely to start with the same side that beat Levante. Bono has impressed in goal so far, and the centre-back partnership of Jules Kounde and Diego Carlos will stay the same. Further up the field, Joan Jordan is likely to be picked ahead of Oliver Torres as he provides the side with the passing range to threaten Barcelona with longer through passes behind the defence.

Munir El Haddadi has a goal and assist in his first two matches and is likely to play ahead of Suso and against his former club. Youssef En-Nesyrito won Sevilla all three points against Levante with a crucial late goal but is likely to be kept on the bench as a super-sub with Lopetegui to keep faith Luuk De Jong, in spearheading the attack.

Barcelona’s threat on the left-hand side of the pitch

The relationship between new fan favourite Ansu Fati and left-back Jordi Alba, as well as star player Lionel Messi, provided Barcelona with a second plan if they found little joy in central areas. In fact, in their first two matches, 44.5% of attacks came from the left-hand side, though, 58.5% of shots have been from central positions.

Barcelona will be threatening from the left-hand side, with a desire to create chances for shots in the centre of the pitch, to increase the expectation of the shot being a goal. Below analyses Barcelona’s first goal against Villarreal, where they took advantage of a long ball behind the defence on the left-hand side.

Clement Lenglet played a long pass behind the Villarreal mid-block, this pass was received by the onrushing Alba, who assisted Fati. Fati occupied a position around the half-space which meant that the Villarreal full-back was occupied by him, this allowed Alba the space to run into, though, it is likely that Lopetegui will demand his wingers to track back and support their full-backs from Barcelona wide overloads. 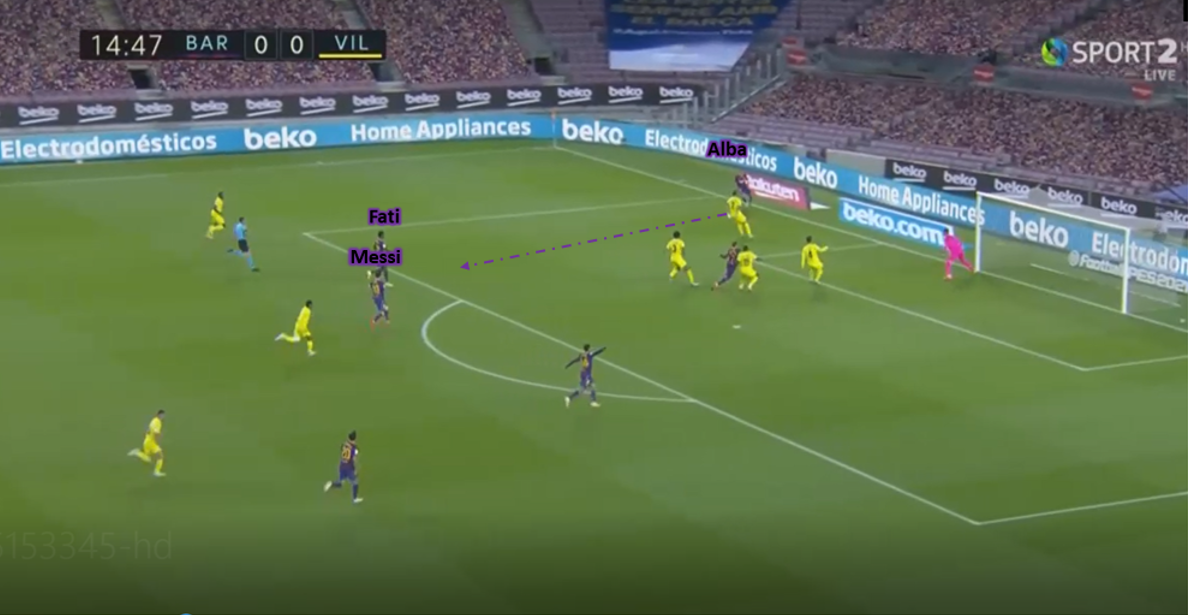 Alba is shown to cutback the ball to Fati, who finished delightfully. This quick transition from defence to attack via a long pass over the defensive line is something fans hadn’t seen so much, rather, they would see a want to attack behind the defensive line, but the problem was many sides played a low block against them. Sevilla are likely to be a mid(or a low/mid-block), the space behind the defence could be exploited.

It is also worth noting that Fati and Lionel Messi are positioned in front of the Villarreal midfield, in a position between the lines and cutbacks will be a cross that Barcelona will attempt as their attacking four looks to find space between the lines to shoot.

The opportunity came from a Lenglet pass, Pique will occupy the left centre-back role, and this could be problematic if Barcelona look to find Alba behind the Sevilla defensive line as his passes will be right-footed rather than left-footed. 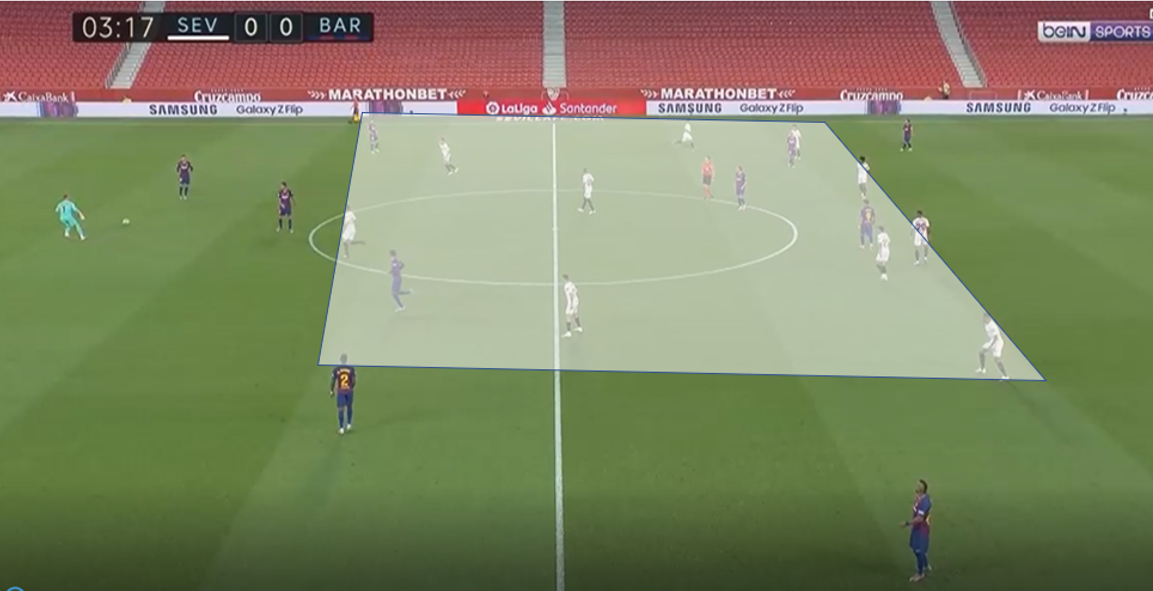 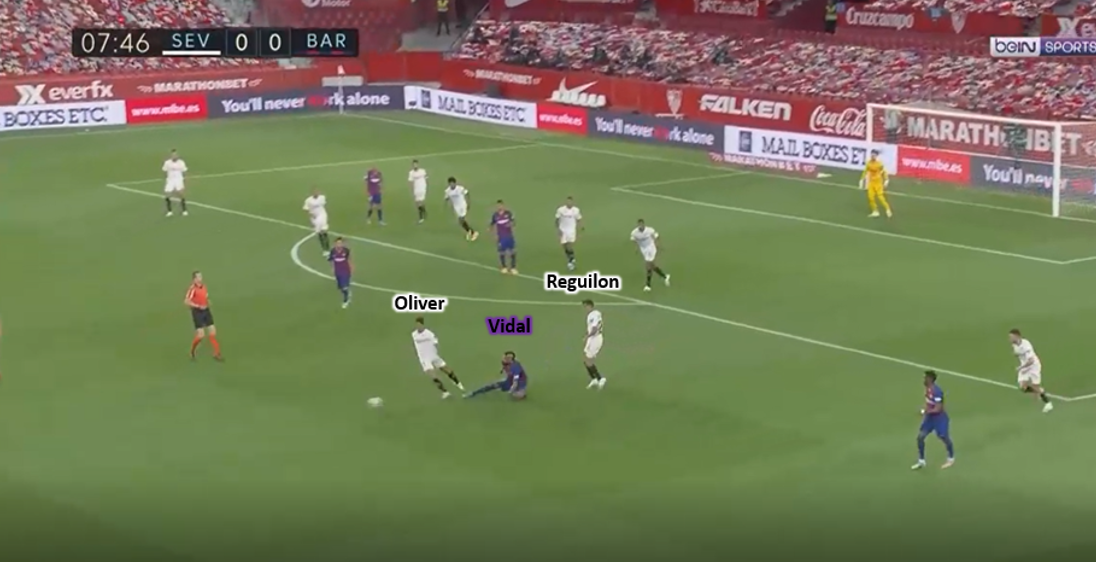 Finding space between the lines, centrally, could be a problem at times for Barcelona, especially due to Fernando’s brilliant defensive positioning and scent for danger Messi and Fati will look to create two v one situations in the half-space to create quick passing combinations around the Sevilla players and into areas behind the defence. This will work well with Messi coming from deeper positions to overload. 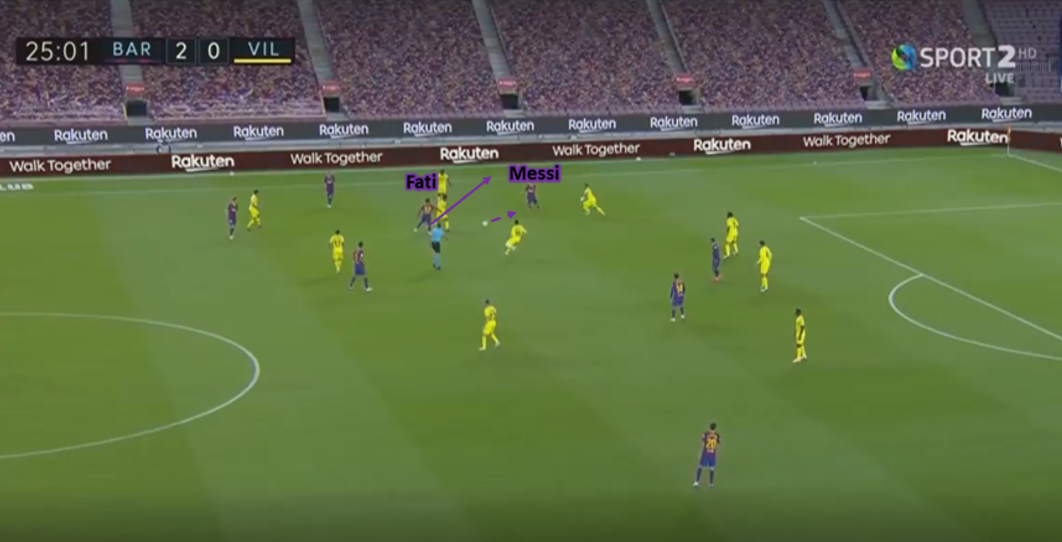 The play is in and around the half-space area(maybe just wide of it).

Fati is able to take advantage of the one-two with Messi to drive into the space behind the Villarreal full-back that was attracted towards the ball, and this could be something we see against Sevilla, though, I expect Sevilla’s discipline to be strong and therefore will make it more difficult to break their block. Fati ends up cutting the ball back to Messi; cutbacks are again something to be watchful of!

Sevilla will look to transition from defence to attack via short passes, and we will see Barcelona apply a mid/high block in the Sevilla half. Though, it is early days for Koeman’s reign it looks as though he wants his side to apply a relatively high mid-block, pressing the opposition more aggressively when possession moves to the mid-third, where 42% of their pressures have come from so far.

The block used also incorporates a man-to-man mark style, which will look to help Barcelona win the ball higher up the pitch. Their 4-2-3-1 formation fits well with the 4-1-2-3 formation played by Sevilla as Barcelona can easily apply a man-to-man mark, the two Sevilla centre-backs won’t be marked allowing the CAM for Barcelona to mark Fernando(DM). Below shows the type of block applied and the man-to-man mark.

It is worth noting a few things. Messi pressed the player on the ball, but it’s non-aggressive and done to force the Villarreal centre-back into making a passing decision. The man-to-man mark press works well because it forces the ball holder into a risky pass, with any short pass likely leading to a duel, as the player who is receiving the ball is being followed by a Barcelona player.

Secondly, note Sergio Busquets, he is one of the pivots on the 4-2-3-1 formation but is positioned very high up the pitch because his man dropped much deeper. The white shaded area left by Busquets could be exploited by Sevilla players as they may look to attract Busquets or De Jong out of their position by off-the-ball movement. This would allow Sevilla a quick transition from defensive third to higher mid-third if they can successfully make progressive passes into this area.

Sevilla did well at keeping possession when passing out the back last season, having only made 15.82 losses per 90 in their own half last season. Though against sides that apply a higher block, they have struggled, against Bayern Munich, a side that apply a high block, they lost possession 35 times; this was 27% of their total losses in the match.

Barcelona’s mid/high block in the Sevilla half will force Sevilla into risky short passes and could lead to Barcelona regaining possession in threatening positions.

It is likely that more of the game will be in Sevilla’s half, even though they averaged 56.9% ball possession last season. Against sides with greater quality, Lopetegui will allow the opposition to hold more ball possession, hoping that the aggressive central press will force the opposition into mistakes. This type of game plan is likely to be implemented against Barcelona, especially, given that Barcelona will want to control possession on their home turf.

The longer Sevilla frustrate, the more likely Barcelona will try riskier passes which could lead to a regain in Sevilla possession. Sevilla only scored four counter-attack goals last season; they would rather retain possession than play riskier passes for a quicker transition although they may take advantage of space left by Barcelona deeper players who joined the attack.

Luuk De Jong has become one of Sevilla’s key attacking players, especially against sides susceptible to crosses. Sevilla provided 19.06 crosses per 90 last season, 11.50 of these crosses were from the right-hand side, Lucas Ocampos and Jesus Navas will look to exploit the space left by Jordi Alba when he attacks, to produce well-timed crosses to the striker. Ten of Sevilla’s 54 goals were scored via a header showing their threat in the air.

Their threat from crosses is clear and below shows how De Jong could threaten, with an example against Granada last season.

As Navas is about to cross the ball, De Jong creates two yards between the two centre backs so he can attack the free space between them without being blocked off. Also, his positioning means that he can get a strong run-up leading to the header as he wants to get power on his header, especially as the header will have to change the direction of the ball to be directed towards the goal, the cross is out swinging, rather than an inswinging cross that could be glanced. 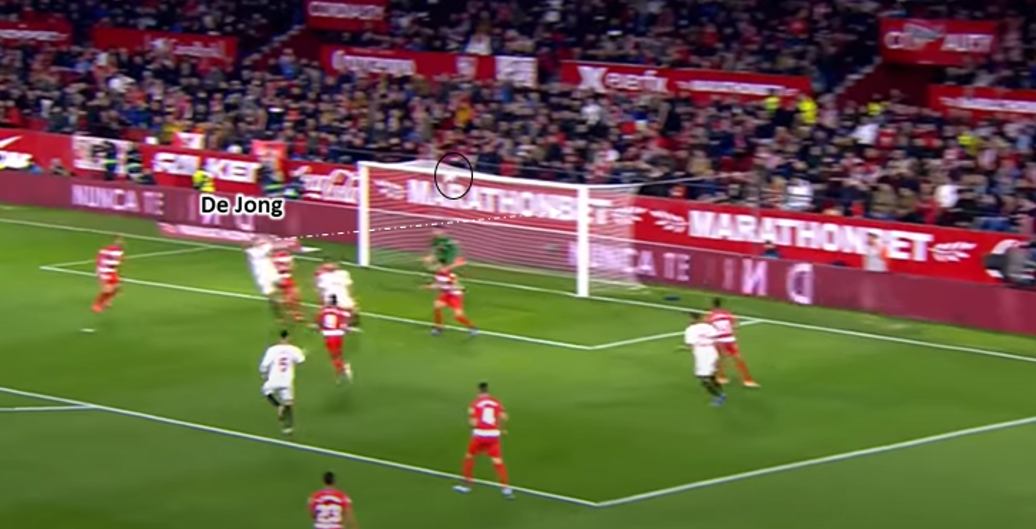 This type of run onto crosses is something you will see De Jong do if he starts the match, though, even he doesn’t start he is likely to have some influence on the match. His aerial ability is also shown as he is able to direct the ball powerfully into the goal, even though the cross is slightly behind him. He is able to still score from the cross as he ran onto the ball, meaning he could still generate enough power to score the header. Four of his nine goals last season were headers.

I hope this tactical analysis has provided you with an insight into Barcelona’s threat from the left-hand side of the pitch and their man-to-man mark press which could cause Sevilla problems in their own third. I also touched on how Sevilla will look to apply a low/mid-block, where they look to press aggressively in central areas to deter Barcelona attacks through the centre. Barcelona will also need to be wary of Sevilla’s threat from crosses, especially with the aerial ability of their strikers.

Sevilla’s quality is clear as they competed well in La Liga last season, Barcelona’s impressive performances in their first two matches show improvements from last season, and I expect their winning run to continue. Ansu Fati and Lionel Messi are likely to be highly involved in a 3-1 win to Barcelona.