The UEFA Super Cup marks the beginning of the European season as the winner of the illustrious UEFA Champions League plays the winner of the UEFA Europa League. This one-off match signifies the chance for more silverware for each side. Some spectators, fans, or perhaps even people within the club see this match as an extension of preseason football. However, with the victories of both cups still fresh in each squad’s mind, this edition of the Super Cup was extremely competitive.

Representing the winners of the Champions League was Bayern Munich after their recent victory over PSG. The German giants were coming in fresh off of their treble-winning campaign, which saw incredible success and attractive attacking football. Their path to the final of the Champions League included an 8-2 thrashing of Barcelona, which caused the Catalonian club into freefall. Since then, Bayern has strengthened the squad by signing Leroy Sané from Manchester City. Unfortunately, Thiago went the other way to England as he completed a move to Premier League champions Liverpool.

After a tremendous final against Inter Milan, Sevilla earned the right to take part in the Super Cup by lifting the Europa League trophy. Their path to the final included fast-paced football which saw the Spanish club dispatch Manchester United in the semi-final. The departure of Éver Banega and the arrival of Ivan Rakitic shows similar squad changes to Bayern, with most of their core players still playing for the club.

This tactical analysis and match report will examine the tactics of both clubs as Bayern Munich defeated Sevilla 2-1 after an exciting 120 minutes of action. 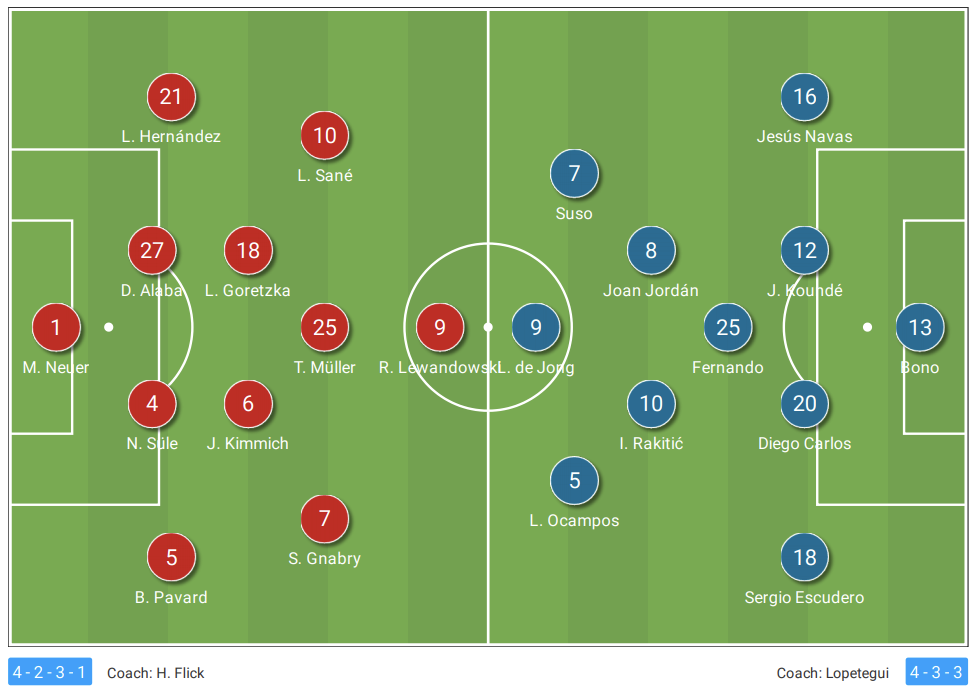 Hansi Flick set up in his usual 4-2-3-1 formation which starts from the back with their long-serving goalkeeper Manuel Neuer. In front of the back four featured Leon Goretzka and Joshua Kimmich, with Bayern’s new number 6 taking on a more important role by being the team’s deep-lying playmaker. The wing featured new arrival Sané, whose pace and ability is a welcome addition to Munich starting eleven. Finally, the main-man Robert Lewandowski led the line after a ridiculous 2019/20 season where he scored 55 goals.

Sevilla, managed by Lopetegui, started in a 4-3-3 formation. The back four was led by Captain Jesus Navas due to his experience and leadership. His ability to attack from the right-hand side was a feature that tweaked the formation of Sevilla while in possession of the ball. With Banega moving on, Rakitic was tasked with being the main creative player in the attacking role for Sevilla. Finally, Luke de Jong spearheaded the line due to his strong ariel ability and hold up play.

At the beginning of the match, a neutrals perspective would probably have been that Bayern Munich would dominate the evening’s proceedings. While this is not ignorant to think because of Munich’s incredible run of results, Sevilla had the fight and energy required to beat Bayern Munich.

After 13 minutes of the match, Sevilla opened their account and scored the first goal of the match. This became apparently possible in the opening minutes due to Bayern’s defensive positioning, specifically the way their forwards pressed. In order for Sevilla to get out of the Bayern press, which came early and often, it was important for them to get the ball into wide areas where they could allow their full-backs to push up the pitch.

Lopetegui recognized this and most likely predicted it, which was reinforced by his team’s performance. Sevilla had to be able to play quick combinations in order to find free space while building out of the back. Bayern’s goal was to press quickly, which typically works extremely well. The PPDA table below shows the fine margins that come into play when playing against a team like Bayern Munich. PPDA refers to the pressing intensity of a team, and specifically the number of passes allowed per defensive action. In this case, Bayern’s first 15 minutes of the match was horrendous compared to their usual standards. They allowed 29.5 passes per defensive action compared to the rest of the match, which was much lower. 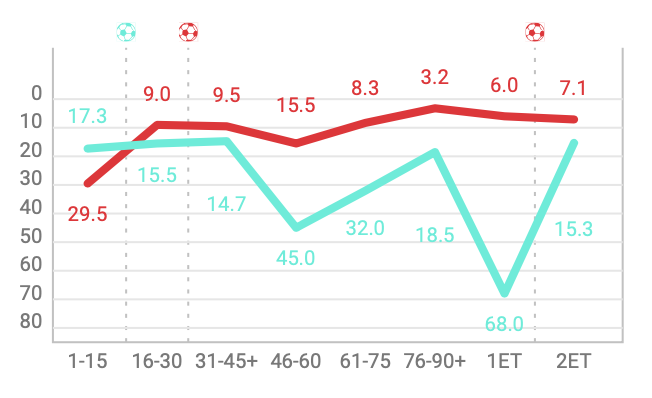 Sevilla did a tremendous job to play extremely well while Bayern was not pressing as effectively. These numbers are also attributed to Sevilla’s high energy at the beginning of the match. Their energy levels are galvanising to any team they face.

The analysis below shows how Sevilla was able to bypass the Bayern defensive press and create space where they have areas of strength. The defensive midfielder, Fernando, found himself in space due to Sevilla’s ability to play combinations around the pressing players with constant movement. In this case, Thomas Mueller was dragged wide from passes which invited him to press. Once Fernando is in the space, he is able to receive the ball. He immediately knows where to pass without taking time to look. 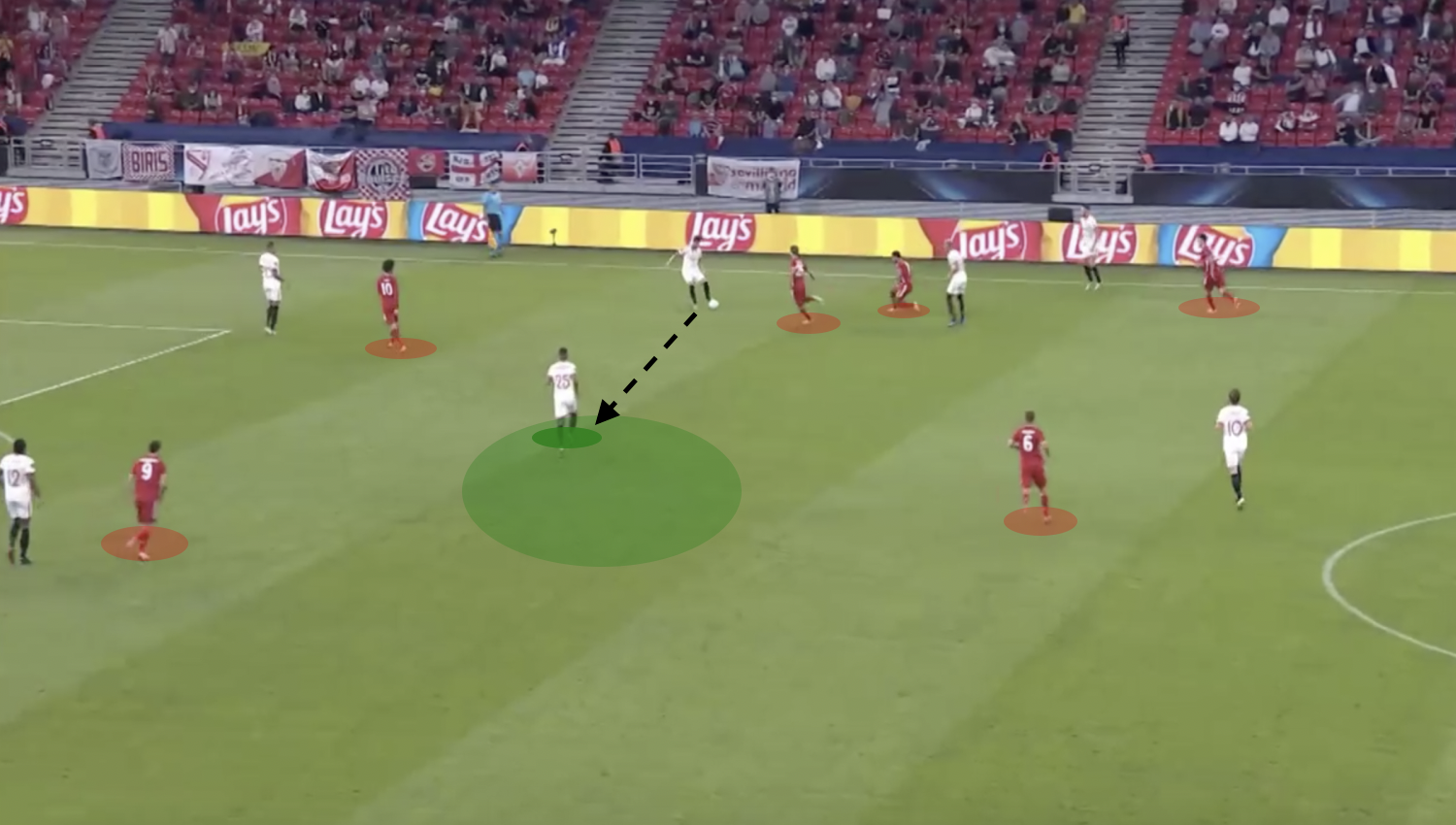 The ball is sprayed wide to Suso who is in considerable space to go forward. From the analysis above, there are six players pressing, which only leaves the defensive back four of Bayern to defend the incoming Sevilla attack. Suso then takes the space he is given along with Navas, effectively taking on left-back Lucas Hernandez in a two vs one opportunity. 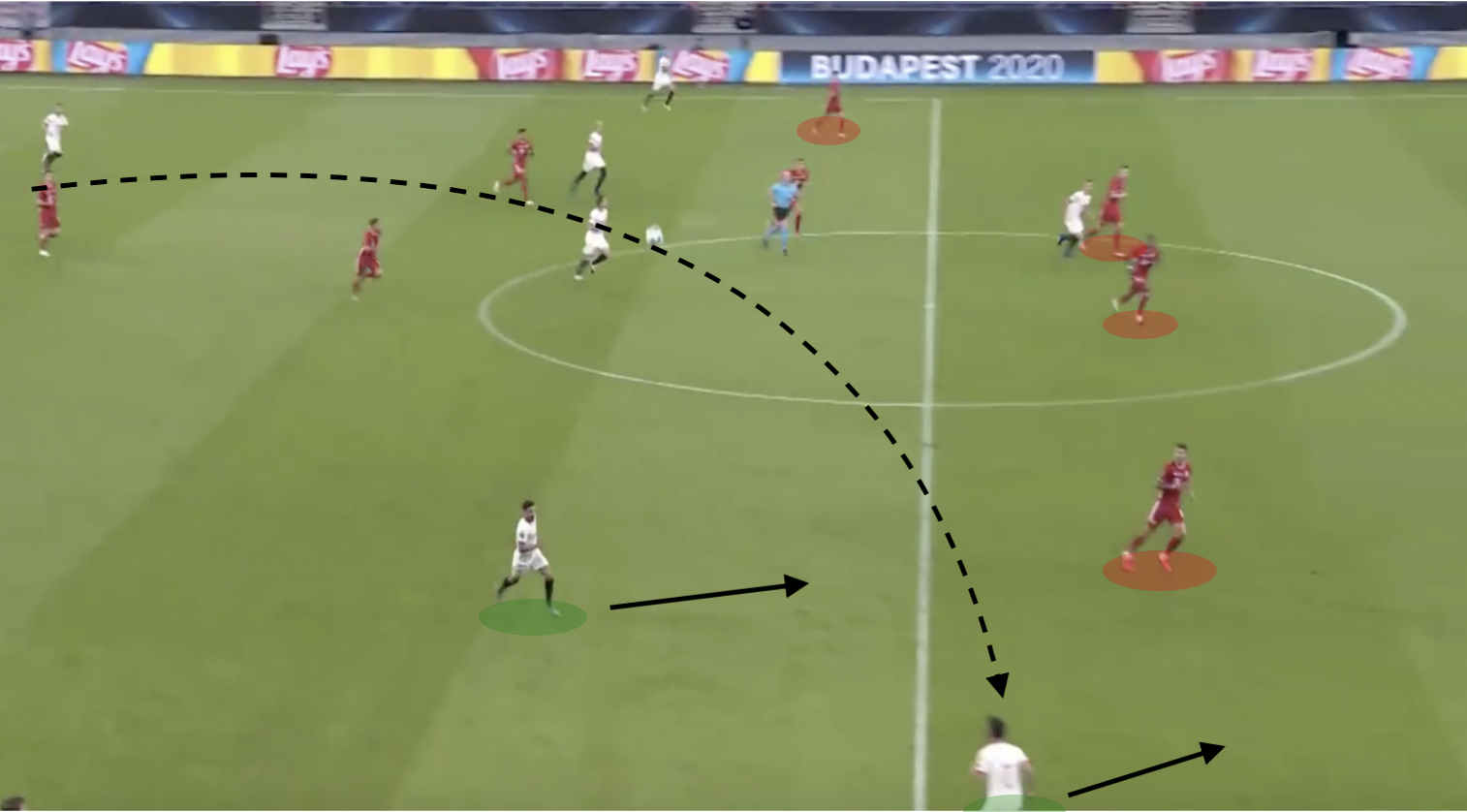 These early moments led to a goal and continued to be fruitful for Sevilla as they got opportunities by attacking down the flanks.

Part of Sevilla’s tactical challenge was finding space to attack the ball when they had it. When playing Bayern, it is almost assumed you will not receive a lion share of the ball, similar to teams who matchup against a Pep Guardiola team. In order to limit Bayern, Sevilla again had to approach the match with a tremendous amount of energy and tactical awareness.

In the first half, Bayern Munich earned a comfortable 64% possession of the ball. From a glance at that statistic, it would be fair to assume they were dominating proceedings, but that was not the case. Bayern Munich had an xG of 0.69 in the first half compared to Sevilla’s 0.76, with xG referring to the expected goals.

The reason Bayern was not able to produce a higher xG and take advantage of their ball retention was due to Lopetegui’s tactics. He knew it was crucial to limit Bayern’s ability to move the ball forward with ease. In order to stop this, Sevilla had to prevent Kimmich from getting on the ball and picking out progressive passes to Sane, Lewandowski, and Serge Gnabry. Out of the 86 passes completed by Kimmich, three were completed to Sane, one was completed to Lewandowski, and ten were completed to Gnabry. Although Kimmich was able to find Gnabry well, Kimmich was forced to play backwards more consistently. He found the feet of Benjamin Pavard 16 times and centre-back David Alaba 14 times.

An example of Sevilla’s ability to limit Bayern’s build-up play can be seen in the analysis below. Leon Goretzka is being covered well and is forced to play to the left-back Hernandez. Notice the way Sevilla begins to press at this moment. Kimmich is covered well by Rakitic despite there being space (highlighted in yellow) behind him. While there is an element of risk by allowing the space between the lines, Sevilla is inviting Bayern to play a more difficult pass because Bayern usually prefers a simple pass to their playmaker Kimmich. 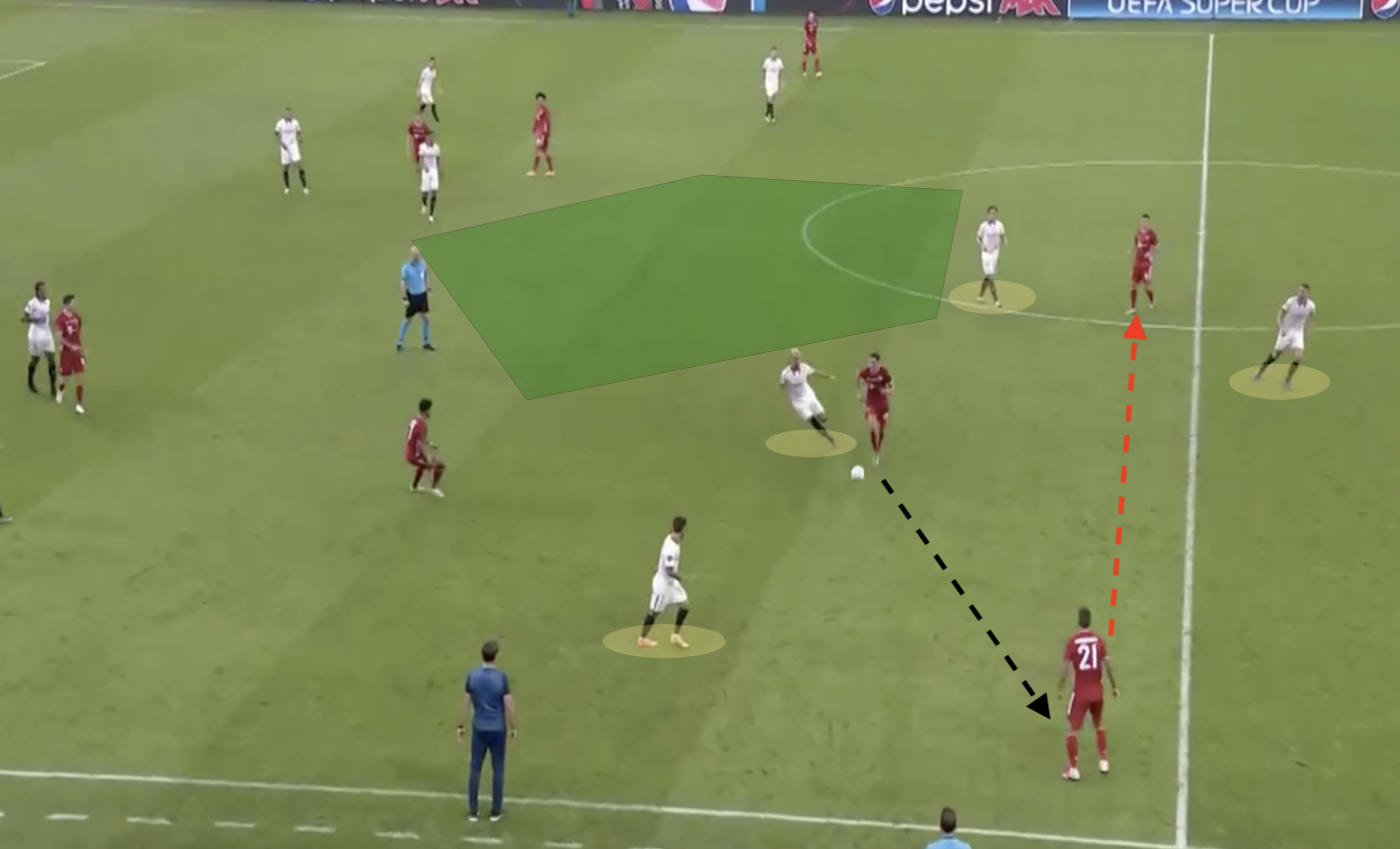 As the example shows, Kimmich is not available when Hernandez receives the ball. You can clearly see his line of vision as he immediately looks for the option into the number 6 in order for Bayern to play a progressive pass. Because he is covered effectively, Hernandez is forced to play the ball to Alaba, who then is forced to play the ball back to the goalkeeper due to the fantastic organisation by Sevilla. 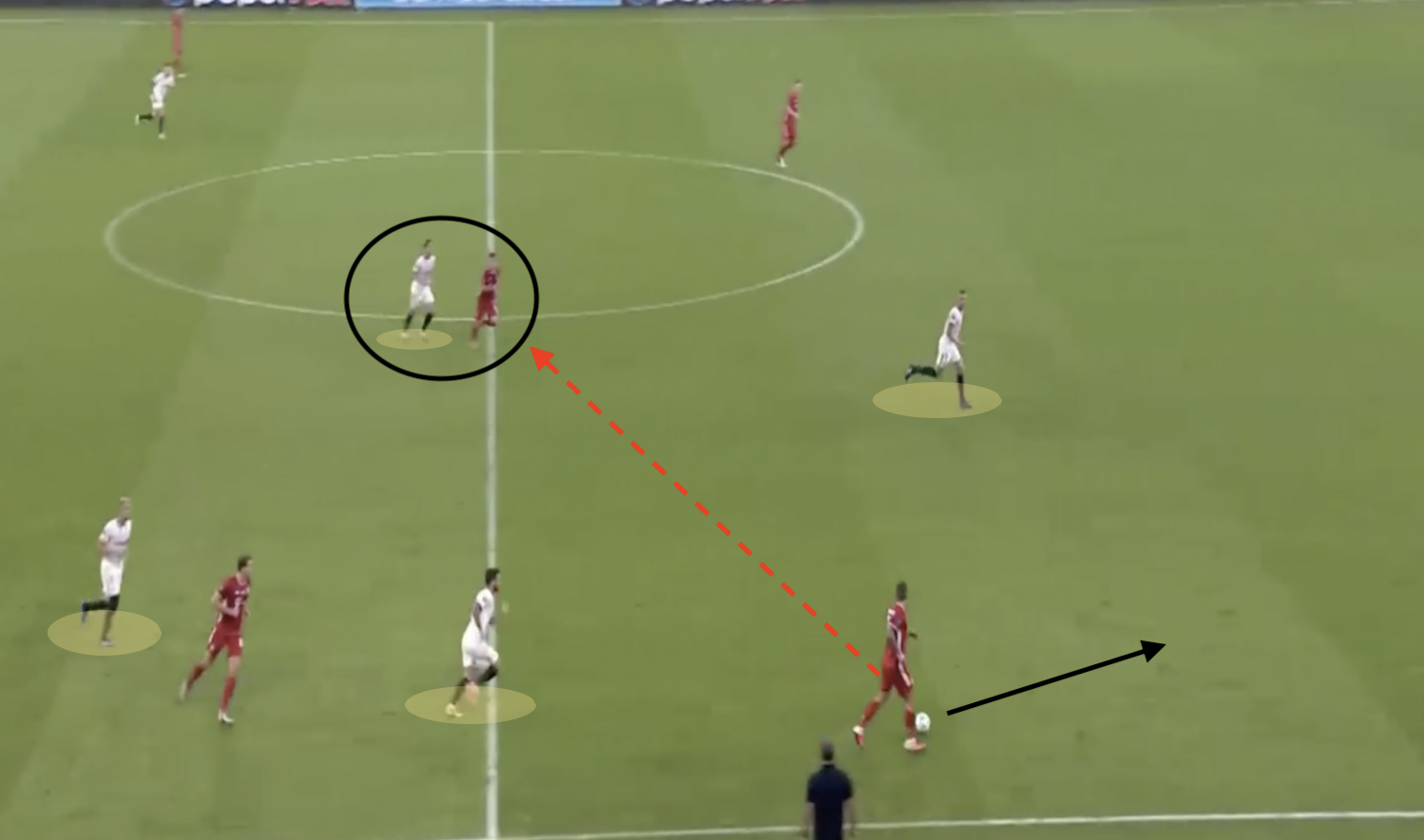 Another way Sevilla attempted to limit Bayern was to jockey for field position throughout the match. Lopetegui knew it was crucial not to get caught in a Bayern onslaught by being stuck in a low block. That amount of pressure would be detrimental to any side’s success. In order to escape the low block, the Sevilla manager demanded that his players constantly push forward when not on the ball. Even when the defenders of Bayern were passing the ball comfortably, Sevilla players would step up a few meters to force Bayern into quicker decision making.

These two tactical decisions allowed Sevilla to limit Bayern as much as they could. However, when playing the German giants, it would always be difficult to exert that much control and energy throughout the 90 minutes, or in this case 120 minutes.

To combat the energy of Sevilla, Bayern chose to mix-up the front three constantly throughout the match. This created a very dynamic looking attack which was difficult to defend for Sevilla. Sané, Gnabry, and Lewandowski all have their individual qualities, and by changing their position during the match, Bayern was able to create fantastic forward movement.

Another way Bayern’s forward movement caused problems for Sevilla occurred when they would group up to form a tight attacking front three. Again, this would cause an overload for Sevilla’s defence and cause problems. An example of this occurs in the analysis below. Alaba is in possession of a non-dangerous area. He does not pose much of a threat, but as the front three moves into position, the danger levels heighten. Gnabry, Lewandowski and Sané are occupying a defender and making the same run forward. As you can see, both Lewandowski and Gnabry have their arms in the air signalling to Alaba to play the long ball into the box. 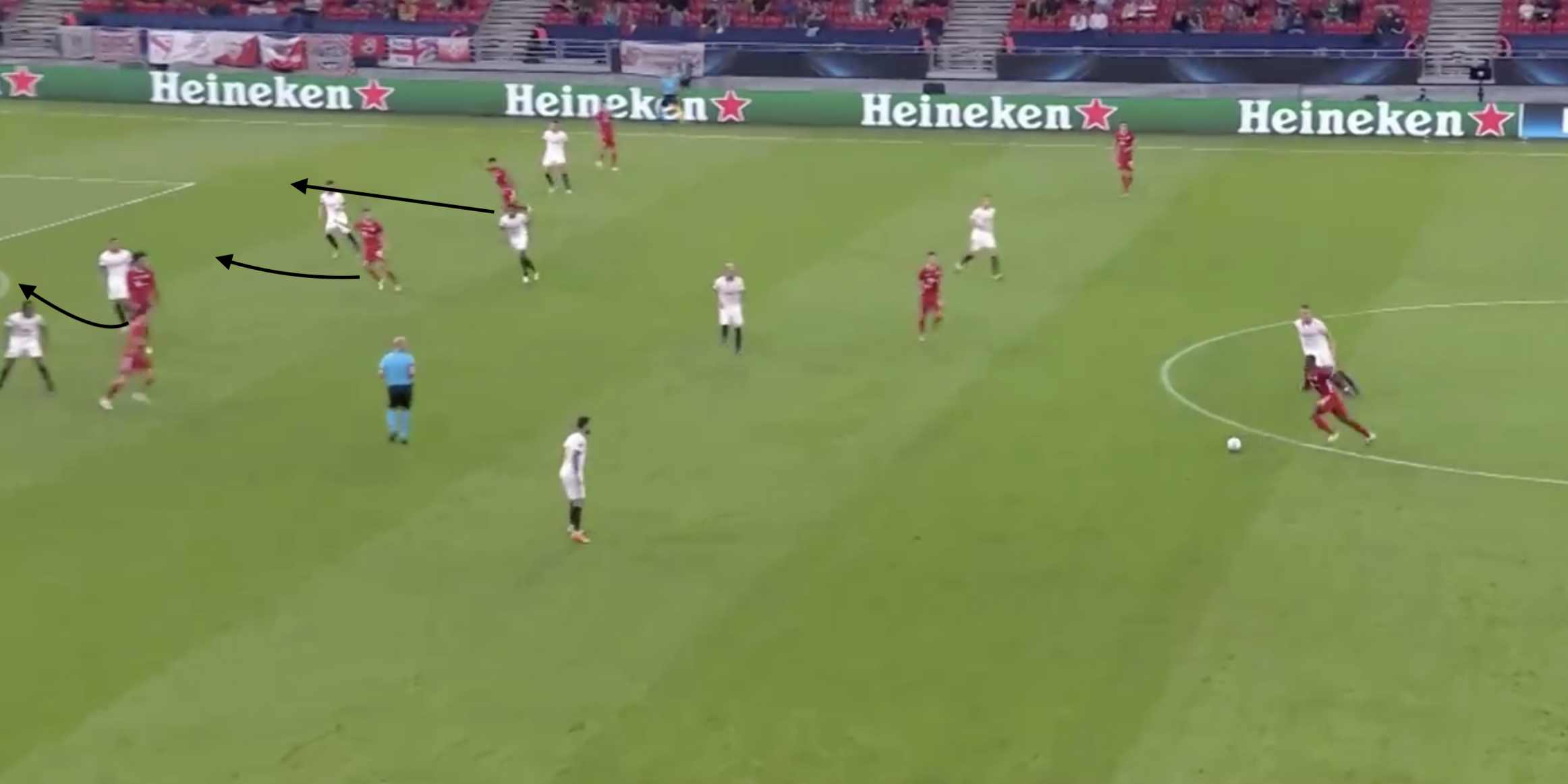 These attacking positions created problems for Sevilla and ultimately cost them a goal as Lewandowski found space in between the centre-backs and provided an assist to Goretzka.

The UEFA Super Cup was a fascinating tactical battle between two top clubs in European football. The match did not have a hint of preseason football as both teams were ready to fight for silverware.

Tactically, Sevilla did a terrific job maintaining their defensive shape and energy. However, they fell victim to the pure ability of the attacking three of Bayern Munich. As the match prolonged with the score being 1-1, it was always more likely for Bayern to come away with the silverware.

Lopetegui will be encouraged by his side’s performance as they begin the La Liga season while Hansi Flick will be satisfied with yet another trophy to add to the cabinet.