After Paris Saint-Germain booked their place in the UEFA Champions League final the day before, it was Bayern Munich and Olympique Lyonnais’ turn to compete for a chance at the trophy. Both clubs had a terrific path to the semi-final.

For Lyon, they were considered the ultimate underdogs in both their round of 16 and quarter-final matches after the pause on the tournament due to the coronavirus. They beat Juventus convincingly in two legs and dispatched Manchester City 3-1. Both of these results were a huge surprise to supporters who expected the opposite. This impressive run was masterminded by manager Rudi Garcia who developed a system that could shock so-called European giants.

In Bayern’s case, no one could ignore their 8-2 rout over Barcelona, perhaps making the fixture one of the most historic victories in the recent Champions League era. For the whole 90 minutes, the German champions suffocated Barca and Lionel Messi. By the end of the match, even the Catalan exile Philipe Coutinho could not stop scoring after registering two goals and an assist in the short time he was on the pitch. With Bayern in such sensational form, this match was always going to be difficult for Lyon.

This tactical analysis and match analysis will examine Bayern Munich and Olympique Lyonnais’ tactics during Munich’s 3-1 victory in the semi-final of the UEFA Champions League. 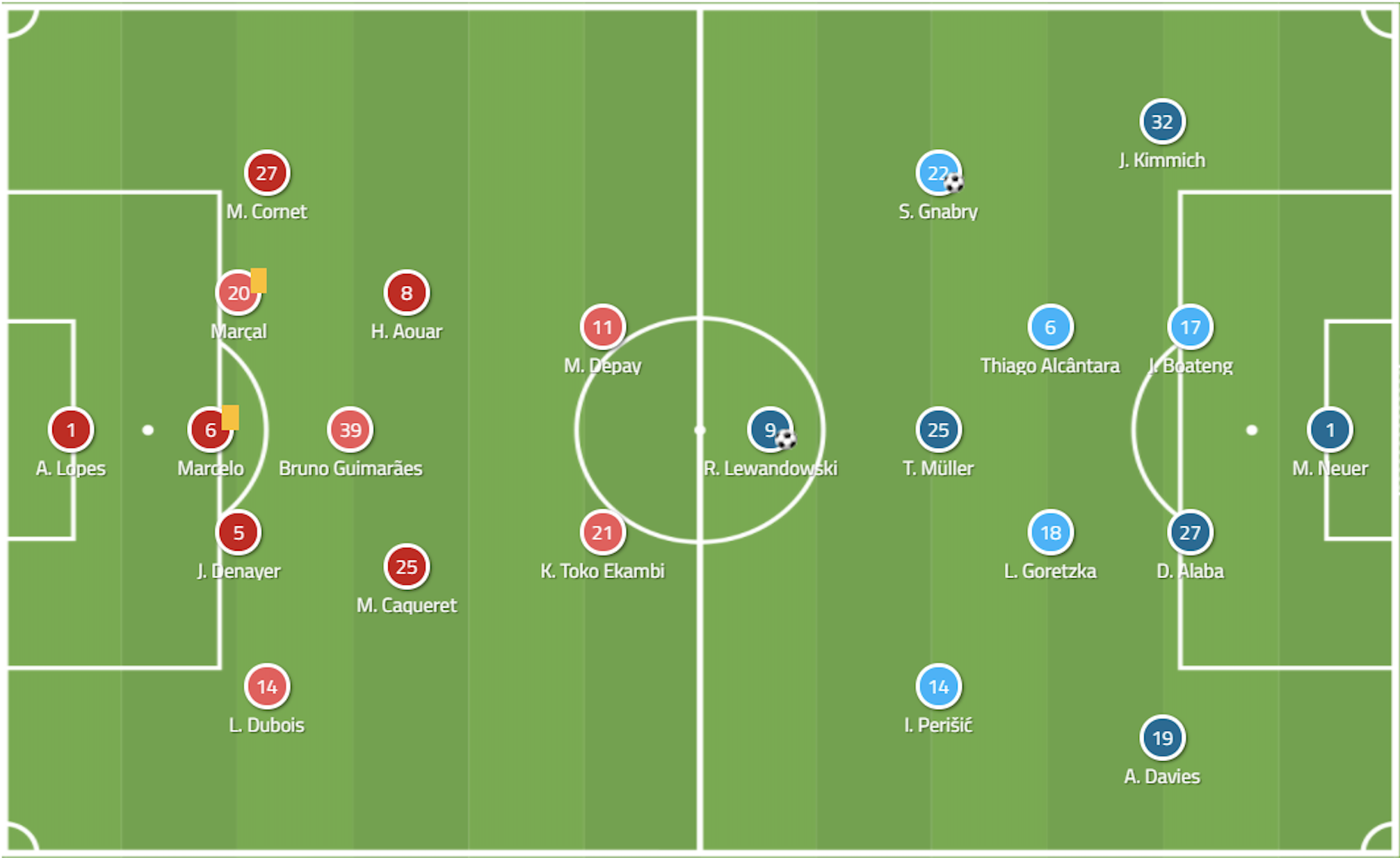 The lineups were an important part of the match due to the attacking and defensive nature of both teams. Lyon set up in a 5-3-2, creating a very strong defensive backline with three midfielders sitting in front of them. Bruno Guimaraes would sit deeper allowing an attacking role for the technical brilliance of Maxence Caqueret and Houssem Aouar to try and create chances for the front two. This was a defensive mindset with the idea of playing on the counter-attack when winning the ball in transition.

Hansi Flick set up his Bayern Munich team in the formation that has seen so much success since he took over at the club. Bayern in the 4-2-3-1 is extremely balanced due to the talent they have at their disposal. David Alaba and Alphonso Davies partnered on the left side of the defense which would prove to be very dangerous as Bayern liked to build-up play from that area of the pitch. Additionally, Thiago Alcantra was a key man in this formation because he was the player dropping back to receive the ball from the centre-backs. Finally, the three attacking midfielders were behind Robert Lewandowski, the Champions League’s highest goalscorer this season.

One of the biggest tactical decisions that was under heavy scrutiny by reporters before the match was Flick’s preference to play a high defensive line. While there are many advantages of a high-line, which will be explained later in the analysis, it is a very high-risk, high-reward style of play. The main negative of a high-line is the space that is left in behind the defensive line. When playing against pacey and clever strikers who are capable of making strong runs behind the defense, that can cause problems. Another negative is the importance of the defensive organization. Without a line that is completely synchronized, the high-line will be detrimental.

Despite these downfalls, Bayern continuously win matches while utilising this system. This is a testament to Bayern’s greatness because although they invite teams to get in behind, they always manage to outscore their opponents. Later in the analysis will explain why that is the case.

However, there were moments early in the match that raised many spectators’ eyebrows, something no one was expecting. Within the first seventeen minutes of the match, Lyon had three terrific chances on goal, one of which hit the post. These chances were due to the high-line of Bayern being exposed, not strong build-up play from Lyon. The Lyon midfielders did have to pick out the passes, but the danger that fell on Manuel Neuer’s goal should not have happened.

A primary example of Lyon dismantling Bayern’s high-line occurred in the tenth minute when Thiago made an uncharacteristic pass that was intercepted. Within two passes, Chaqueret delivered a beautiful pass in between Jerome Boateng and David Alaba to release Memphis Depay clean through on goal. 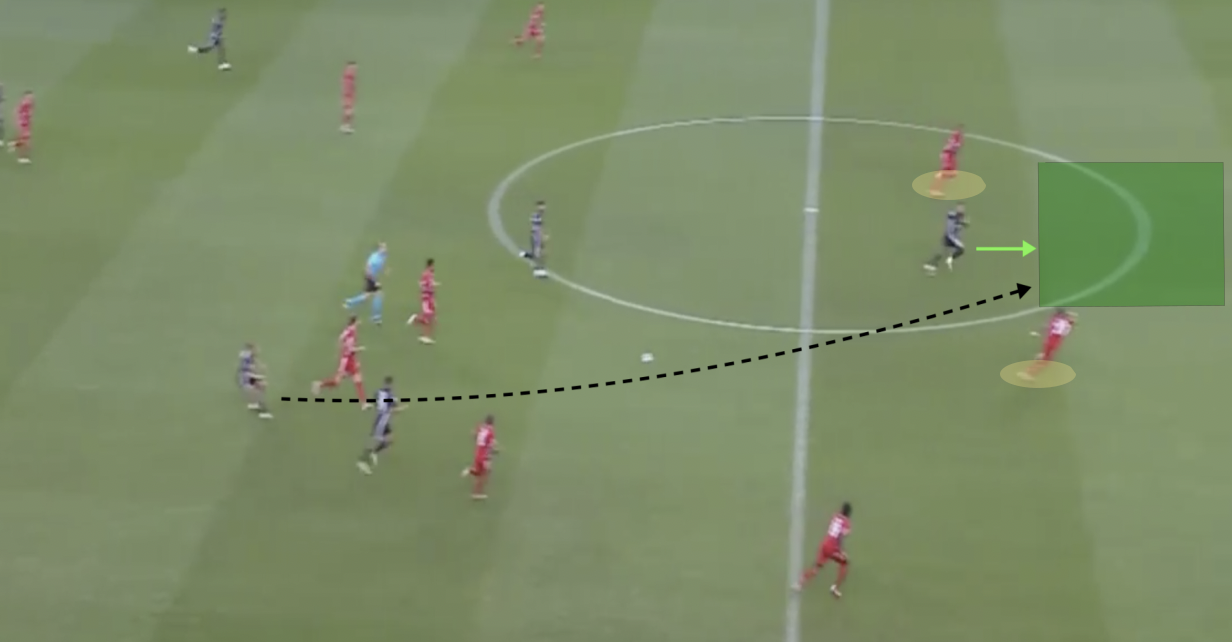 Notice the amount of space that was present the moment the French midfielder delivered the pass to Depay. The amount of space allowed for the pace of the Dutchman to be clean through in a very dangerous position. If not for Depay’s poor attempt, Lyon could have been up 1-0.

Another example of the high-line failing occurred in the seventeenth minute. Karl Toko Ekambi makes a terrific run, fooling Davies and is in behind the rising star. Despite Davies tremendous recovery pace, Ekambi manages to break past the Canadian and is clean through on goal. His shot cannoned off the post, which was followed up with another poor attempt wide.

In these two critical moments, Lyon’s counter-attacking tactics worked as designed. However, against a team like Bayern, two clear-cut chances are sometimes all that you are allowed. After this period of the match, Munich cleaned up their act and maintained much more control over the tiring Lyon side.

After analyzing what went wrong for Bayern while utilising the high-line, it is important to understand what went well while implementing these tactics. Clearly their unbeaten streak of 20 matches proves how dominant they have been, and the high-line has been a huge part of the club’s new image of dominance.

The German champion’s ability to be high up the pitch due to the defensive lines positioning is key to how they win the ball back so effectively. Bayern’s PPDA or pass per defensive action was a mere 9.1, compared to the French side’s 31.6. What PPDA means is the number of passes that a team will allow while the opposition is in possession (on average). Therefore, Bayern allowed an average of 9.1 passes per defensive action, a statistic that is incredibly impressive. Even more impressive was their ability to hold Lyon to 7.6 passes in the first half. Particularly in the first 15 minutes of the match, Bayern held Lyon to an incredible 5.6 passes. 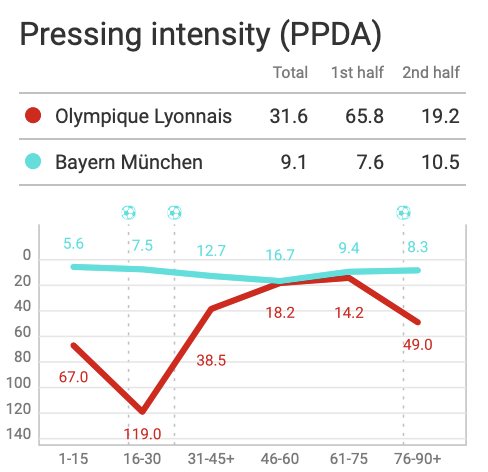 The reason they are so successful in this important category is due to the space that Bayern compresses. Because most of the space they allow is in behind the defensive line, it means the space in the opposition half is incredibly dense due to the number of players in that area. Bayern set up in a 4-2-3-1, creating a controlled midfield area that is difficult to play through due to the five midfielders proximity to the available space in between the lines.

An example of the Munich press working extremely well can be seen in the analysis below. As Maxwel Cornet is on the ball passing it to the centre-back, Munich’s shape is very strong. They are pushed high up the pitch and Lewandowski is leading the line. They have complete control over any pass that Lyon makes, making any attempt to move forward null. 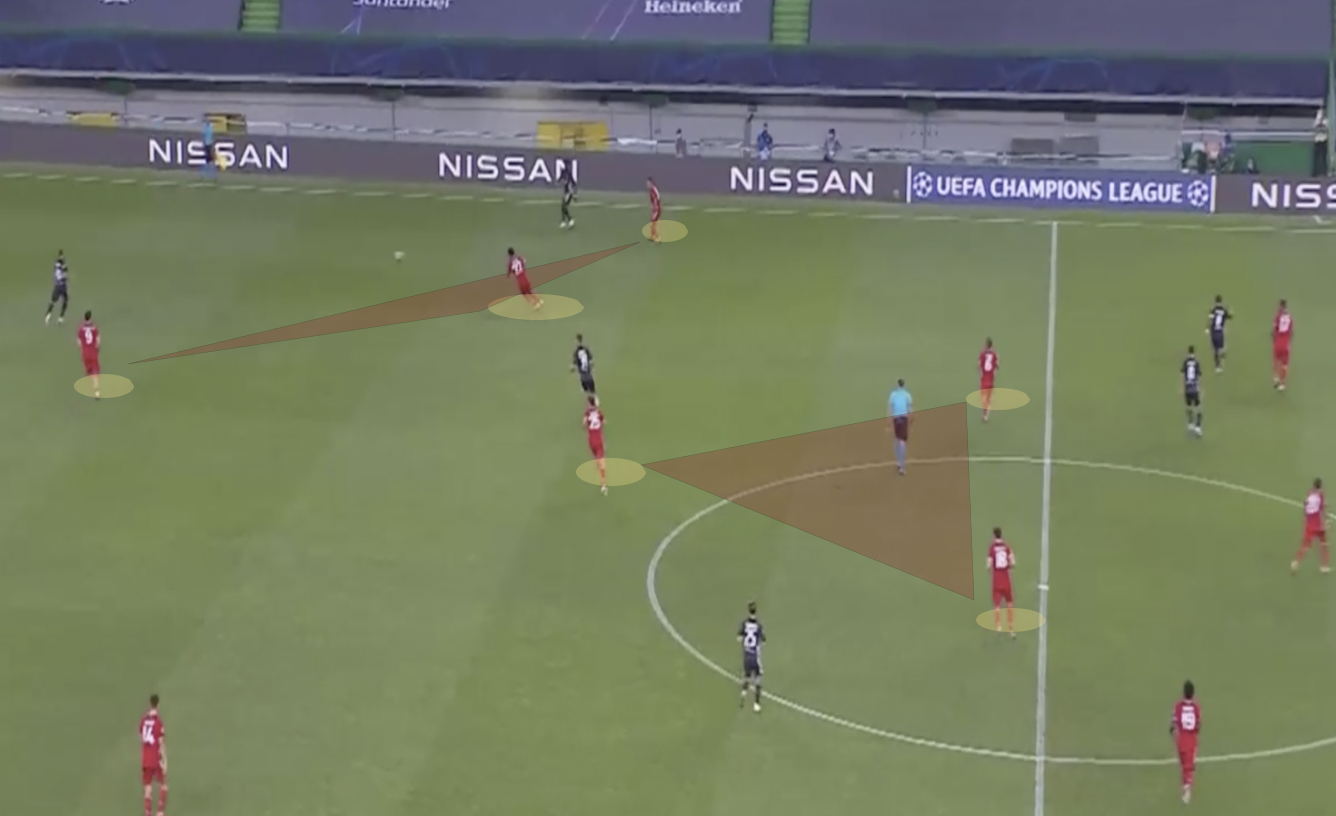 These tactics lead to Lyon resorting to the long ball to get out of the press. The table below shows the two sides and the percentage of long balls played. Especially in the first half, Lyon played twice as many long balls as Bayern in terms of percentage of their own passing. This is significant because it shows Bayern’s confidence will in possession compared to a more long-ball nature. 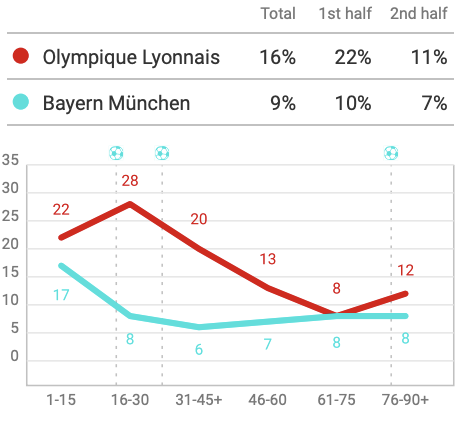 Unfortunately for Lyon, the long ball was one of the only viable options to escape the press from Bayern. They concede far too many chances by trying to work their way out of the press on the ground.

Bayern’s dominance in the midfield

The final piece of this match analysis which can not go unsaid was Bayern’s attacking dominance throughout the whole match. Bayern finished the match with an xG of 3.35 while Lyon ended with an xG of 1.13. This stark difference in expected goals based on other factors came down to the ability of Bayern to control the midfield during the match.

Their dominance showed in the amount of possession they enjoyed, ultimately imposing their will on Lyon while the French club struggled to get out of their own half. Munich ended the match with a staggering 64% possession while owning 65% of possession in the first half.

The reason Bayern were so in control was because of Lyon’s lack of numbers in the midfield. They did have three players on the team sheet in the midfielder position but their positioning was very flat, meaning they did not pressure the ball carriers of Bayern. In particular, Thiago enjoyed an incredible amount of freedom all over the pitch.

The example below is just a snapshot of the amount of time he had while in possession. Thiago would check-in to receive the ball and would be allowed to turn and access his options. This became a huge problem for Lyon, who defended far too deep during the match. Their counter-attacking tactics had worked in the past, but it did not work during this time because they showed too much respect to Munich. 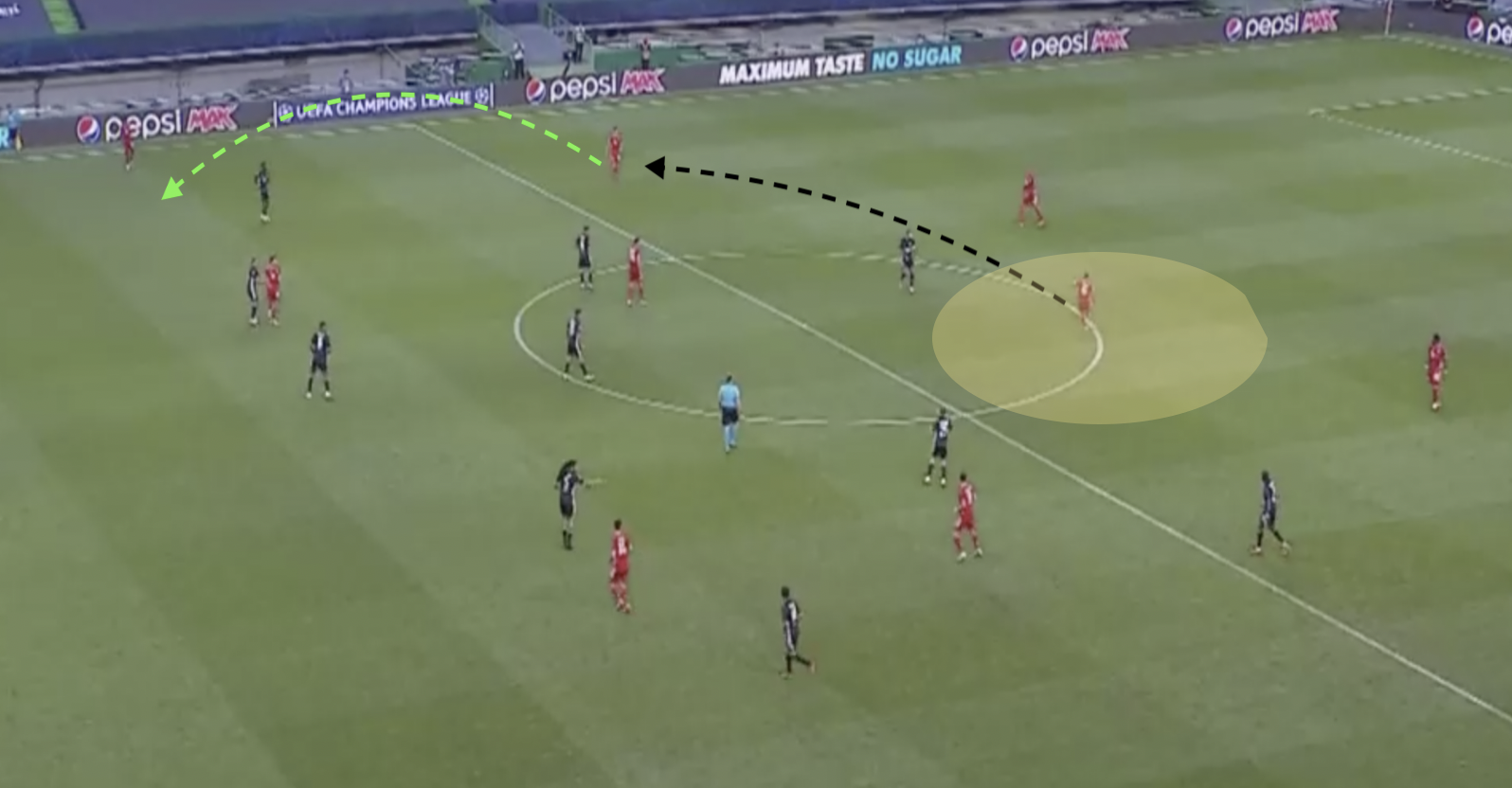 Here, Thiago finds the feet of Joshua Kimmich, who is also in an area with lots of time on the ball. This allows him to pick his head up and find the darting run of Serge Gnabry, who eventually scores Bayern’s first goal on the match.

This match analysis uncovered the key reasons as to why Bayern Munich found so much success in the semi-final against Lyon. Despite conceding three goals, Lyon put in a great display. They did create early chances and were dangerous at times, but ultimately the strength of the German champions squad was too much for the French outfit.

As we approach the final on Sunday, it will be interesting how the high-line of Bayern does against much more lethal opposition.