Following a one-goal away win at Valladolid, Barcelona invited Osasuna to Camp Nou aiming to do everything they could to keep their title hopes alive. While the Blaugrana still needed to be reliant on table-toppers Real Madrid to have any shot at the title, opponents Osasuna also came into this fixture following a 2-1 win over Celta Vigo.

However, the visitors shattered Barcelona’s faint chances of defending their title with a 1-2 win yet again, despite being restricted to ten men. In this tactical analysis, we’ll be looking at the teams’ line-ups, how Barcelona build-up worked, how Osasuna were able to contain Barcelona and hit back on their weaknesses. Similarly, we’ll look at how Osasuna’s tactics were effective and how Barcelona’s attacking ineffectiveness haunted them yet again.

The home side lined up in a traditional 4-3-3, with Junior Firpo replacing Jordi Alba in the left-back position. Similarly, the likes of Ansu Fati and Martin Braithwaite started alongside Lionel Messi, replacing injured Antoine Griezmann and Luis Suárez to complete the front three. Ivan Rakitić started in place of Sergio Busquets, completing the midfield trio with Riqui Puig and Sergi Roberto. 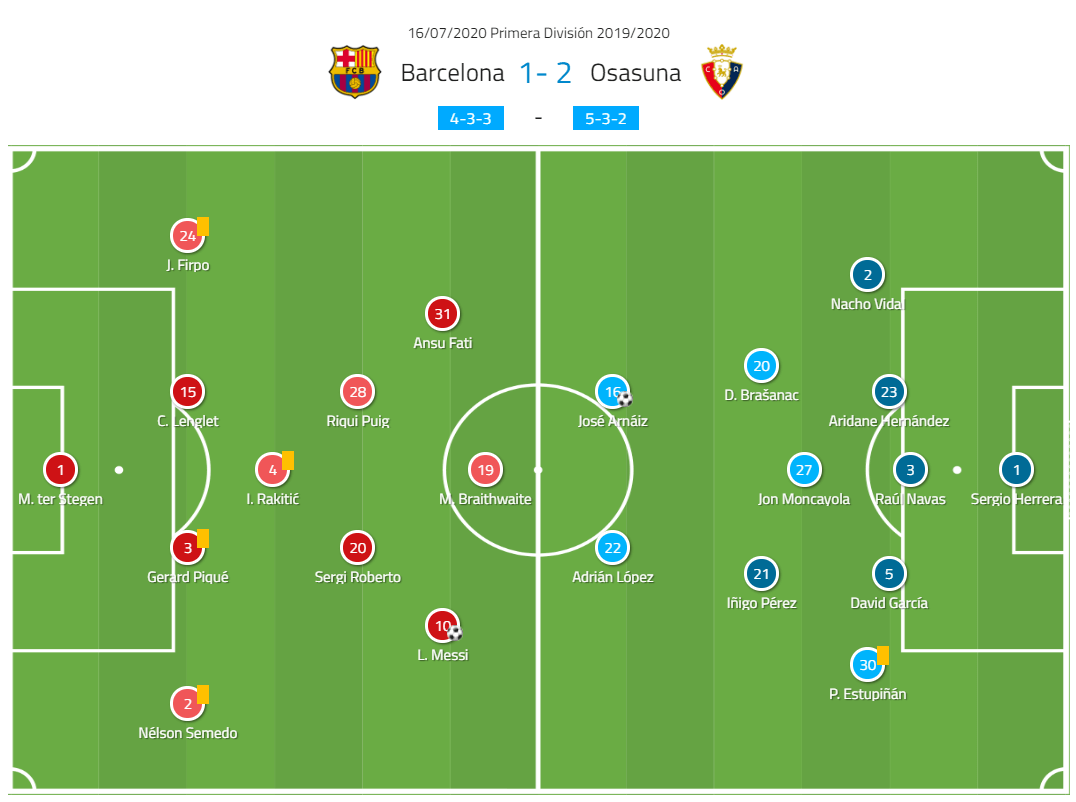 Osasuna started with a 5-3-2 formation. Sergio Herrera was placed in front of the sticks for Jagoba Arrasate’s side, shielded by a back-five of Nacho Vidal, Aridane Hernández, Raúl Navas, David Garcia and Pervis Estupiñán. Darko Brašanac and Jon Moncayola teamed up with Iñigo Pérez to complete the midfield that supported the front two of José Arnaiz and Adrián López.

Sticking to their classic build-up from the back scheme, the Blaugrana looked to progress creating a channel of passing networks. The keeper and central defenders were heavily involved in the process, along with the sole defensive midfielder Rakitić, who dropped deep to support the build-up. Contrary to the 3-5-2 build-up formation that they used against Valladolid, Barcelona used a 2-3-2-3 space while they were advancing the play. Due to Osasuna’s shape, Barcelona were able to comfortably exchange passes between the centre-backs and full-backs alongside the deep-lying midfielder. 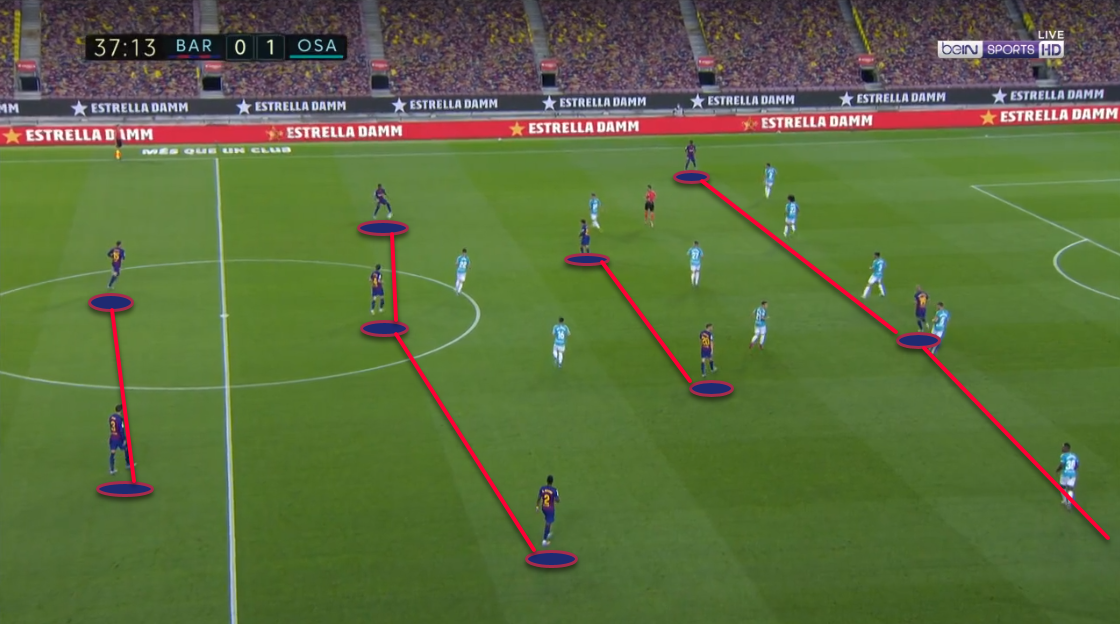 Sergi Roberto and Riqui Puig were placed between the lines, to anticipate and convert any direct passes through the first line. The duo was tasked to supply the ball further ahead to the front three. Since Osasuna remained cautious and didn’t opt to press high, Barcelona had a fair share of lateral passes during this phase of build-up.

However, as the play progressed and as Barcelona entered the advanced areas with the build-up, full-backs seemed to be taking an advanced and wide role. In addition to providing width, the full-backs were tasked to be involved in the build-up play as well as to stretch the opposition defence. 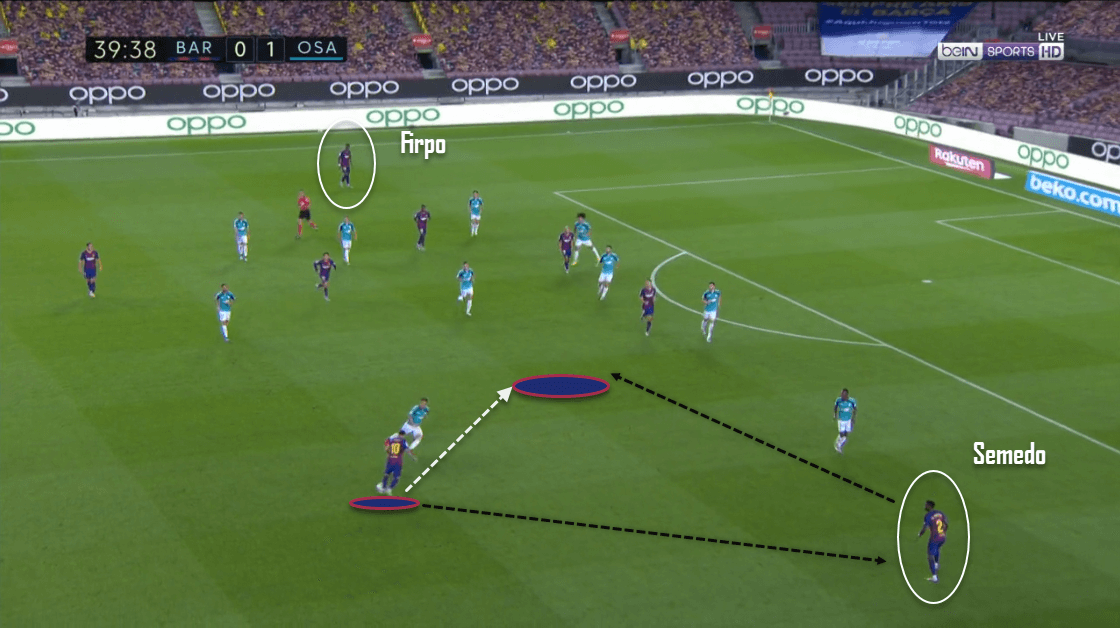 One of the examples of Barcelona’s use of full-backs can be seen in the move above, as Messi passes the ball to Semedo only to receive it inside the space indicated. As Arturo Vidal was left out of the starting eleven, Barcelona looked to use the full-backs to organize play when they were upfront, rather than using them to land the ball inside the box. On the other side of the play, Junior Firpo and Ansu Fati were executing a similar set of movements. Firpo contemplated Fati’s runs with regular through balls.

It was an immediate relief to Osasuna as the thriving Messi-Griezmann duo couldn’t start this match. With a poacher like Martin Braithwaite placed in the middle alongside Messi and Fati, Osasuna made sure their defensive shape remained firm throughout the match, blocking passing lanes and outnumbering Barcelona forwards whenever they seemed to penetrate vertically. 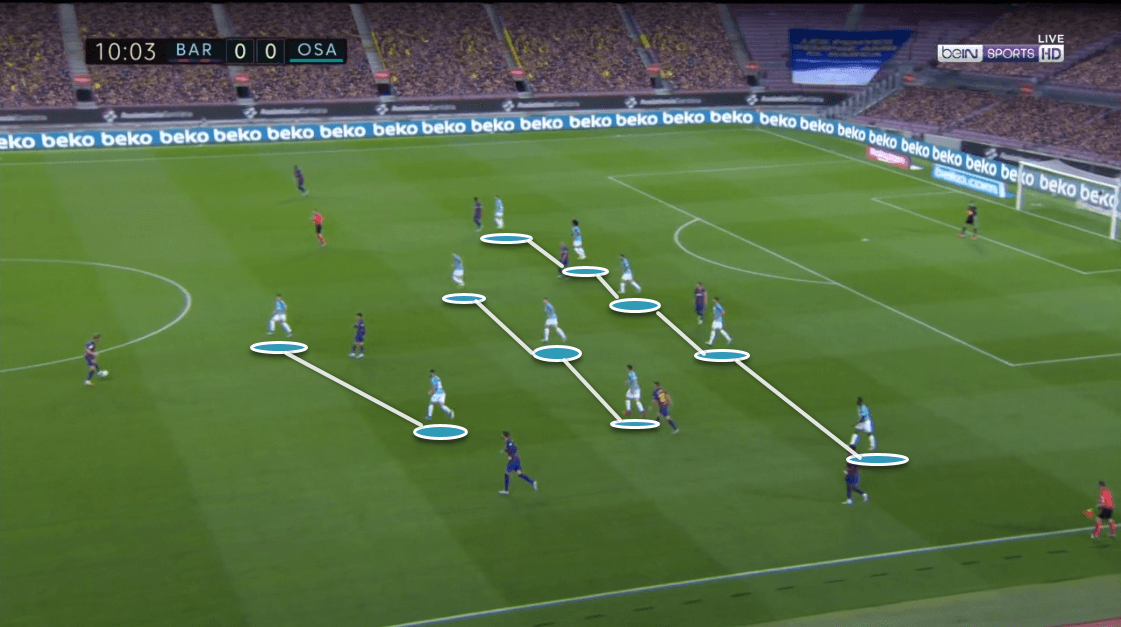 Osasuna’s decision of not going to press higher and implementing a mid-block made them able to defend in numbers. The three-man line in the middle was able to combine with the five-man backline to outnumber Barcelona’s forward players. Due to this approach, Arrasate’s side was able to expose Barcelona’s long-standing attacking flaws in the final third. 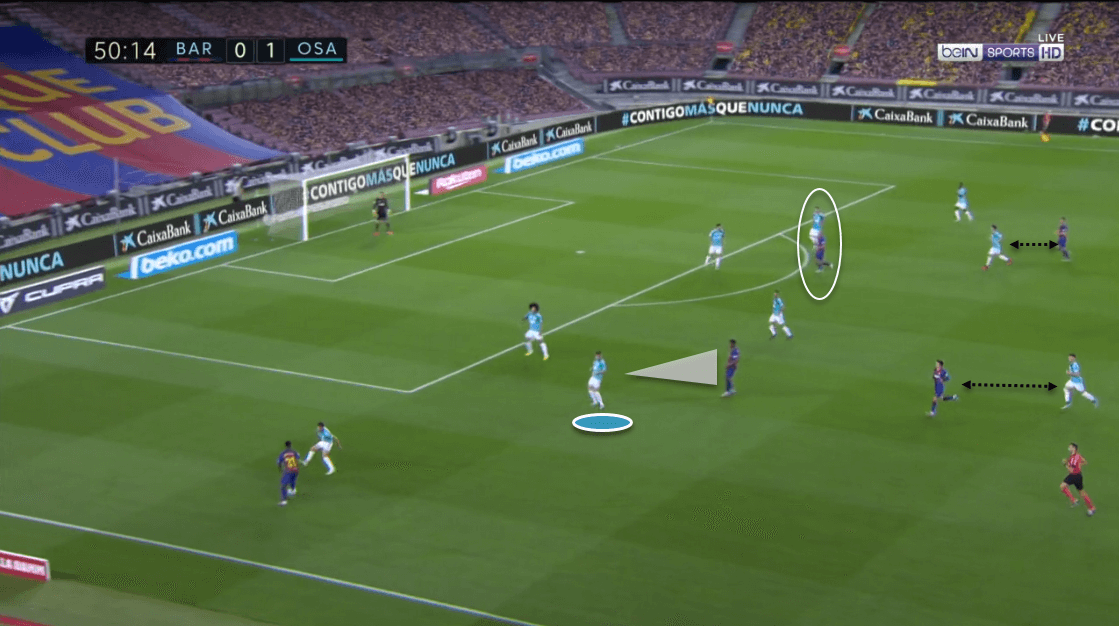 Similarly, when Osasuna were caught higher in their own areas, their approach of man-marking every Barcelona player making runs forward was effective throughout the match. Osasuna were able to make sure they always had enough players in the box to anticipate and cancel out runs inside the box and thus were able to cancel Barcelona’s chances of shooting from a comfortable position. As a result, Barcelona were only able to manage an xG of 0.93, despite registering 18 shots compared to Osasuna’s nine. Remaining in close proximity to each other and creating numerical advantage against the attackers was a simple, yet well-executed and effective defensive approach. As a result, Osasuna were able to frequently dispossess Barcelona forwards, as they had 55 interceptions in the match compared to Barcelona’s 27.

Osasuna’s formation suggested defensive tactics, followed by attempts to catch Barcelona by counter-attacks. What was indicated on papers, happened in the pitch as well.

Barcelona’s attempts to use the full-backs in advanced positions upfront created voids in the wider areas for Osasuna to exploit. As a result, Osasuna tried to land long-balls into the wide areas for their wide players to make runs and advance in the Barcelona defence. 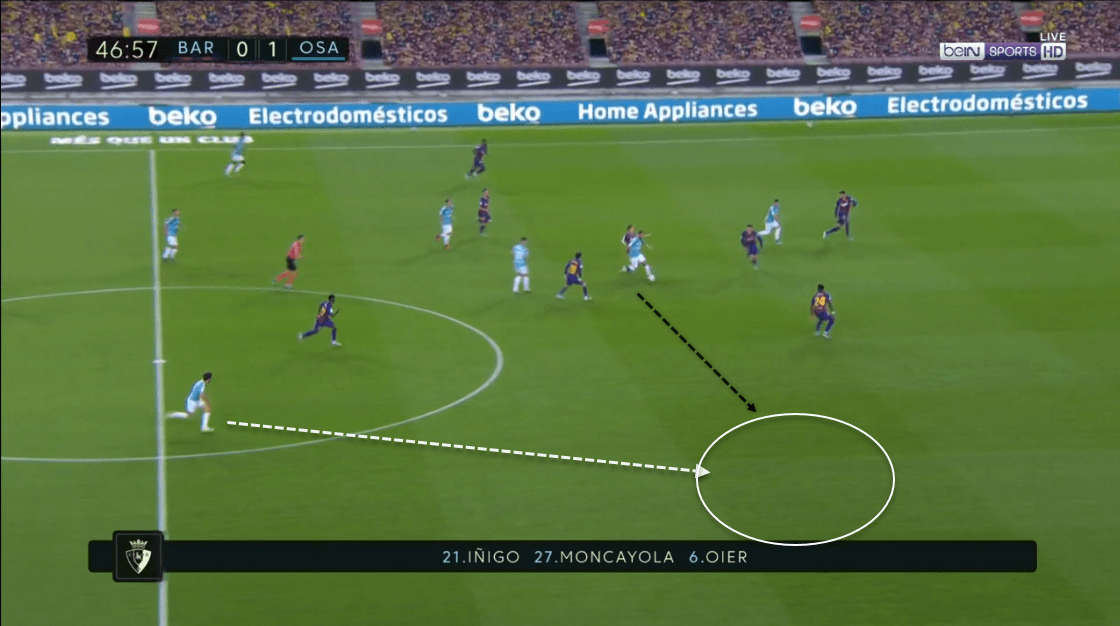 As we can dee in this instant as well, after a recovery, Osasuna are looking to exploit the space towards the right, created by Barcelona’s overhaul towards the side of play. Osasuna’s pass-map, hence, is not that dense as compared to Barcelona’s, as they preferred to play quick passes to switch plays or long balls to exploit spaces. 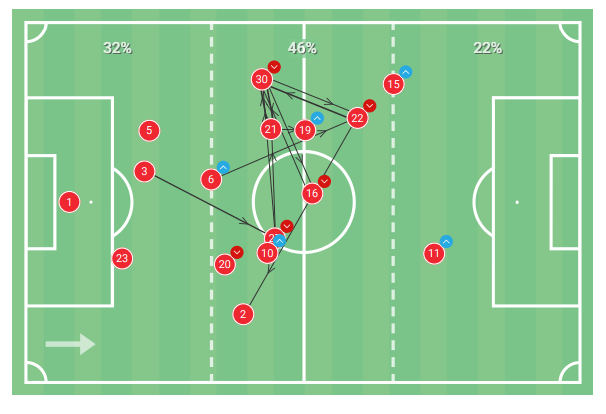 Despite playing very few passes to attack, we can see some diagonal lines appear in the pass map. This is because of their attempts to use the wide players to exploit the space left by Barcelona full-backs. Similarly, the distance between two forwards, Arnaiz and Lopez is comparatively wide, which was purposefully maintained to stretch the Barcelona defence and allow the full-backs to make runs through the corresponding half-space. Osasuna’s first goal came in a similar tactical move. 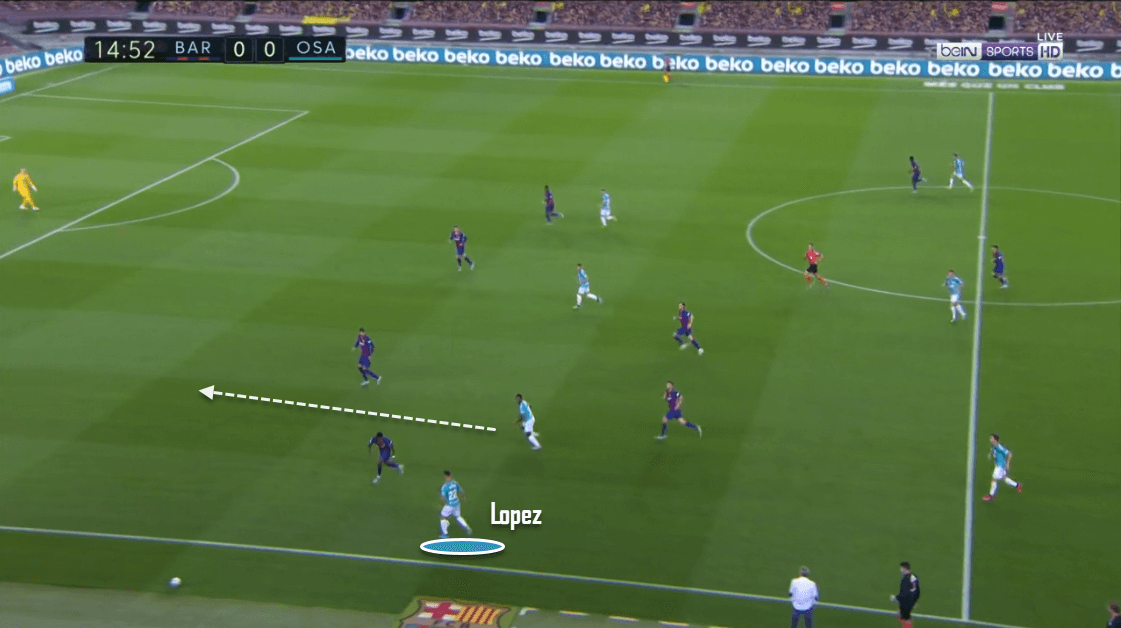 We can see Lopez, one of the two forwards, receiving the ball in a wide position, hence drawing Nelson Semedo towards him on the wide. In his corresponding half-space, Estupiñán is seen making a run using the gap created between Gerard Piqué and Semedo. With a through ball, Lopez releases Estupiñán forward, free to pass inwards to any run-making players. 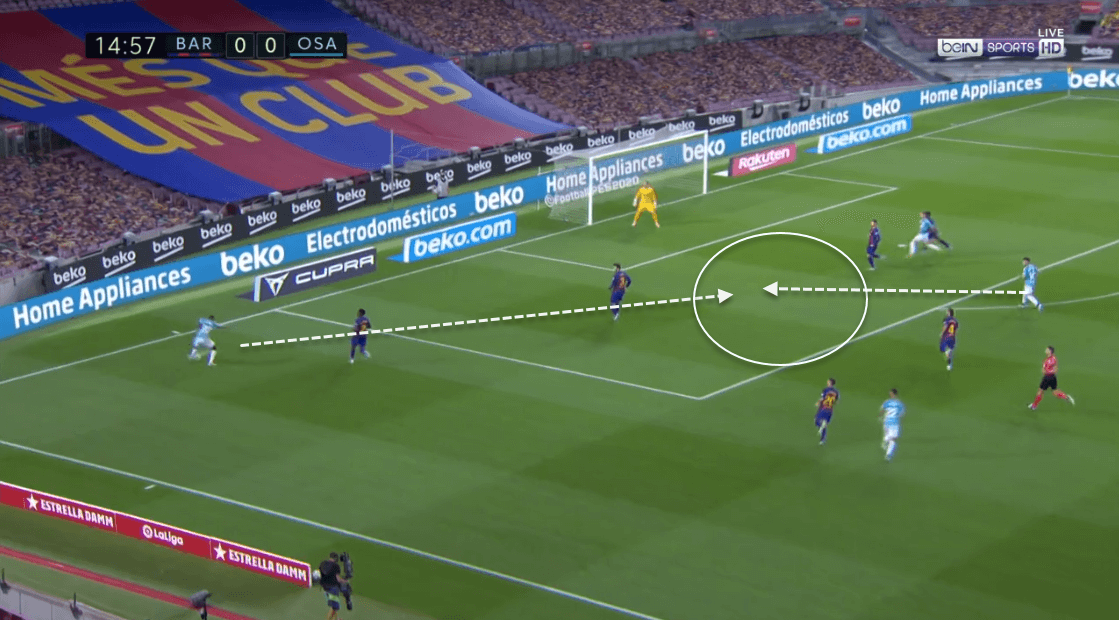 The move ends with Estupiñán accelerating towards the left and drawing Semedo enough towards him. He releases the ball, spotting the space created by Piqué’s inability to cover his area and the run-making Arnaiz gets chance to shoot the ball past ter Stegen. In this way, Osasuna’s attempts of countering Barcelona’s defence utilizing the wide spaces and with fewer yet effective passes saw them win the attacking battle despite registering a fewer number of attacking moves.

Barcelona’s attack was blunt and lacked vertical penetration in this fixture. Although they were allowed to keep the ball and play lateral passes in the centre, the final-third link-up and chance creation were not up to the standards for Quique Setién’s side.

The use of full-backs in link-up meant that Barcelona essentially created a dense presence in the ball-playing side. Full-backs only served as assisting factors for forwards, who would end up closing in on the central areas, making Barcelona’s attacks more concentrated on the central zones in the final third.

As we can see from the information as well, 91% of Barcelona’s xG from attacks came from central attacks. However, their ineffectiveness in finishing meant they wasted all of their chances. Barcelona got just two shots on target throughout the match, one of them being Messi’s goal from free-kick just outside of the box. Hence, Barcelona only managed to register one shot on target from open play – a very bad number considering their attacking capabilities.

Due to overhaul in the ball-playing side, Osasuna’s defence was drawn towards the overhaul as well, leaving the other side of the pitch empty for the Blaugrana to exploit on several occasions. 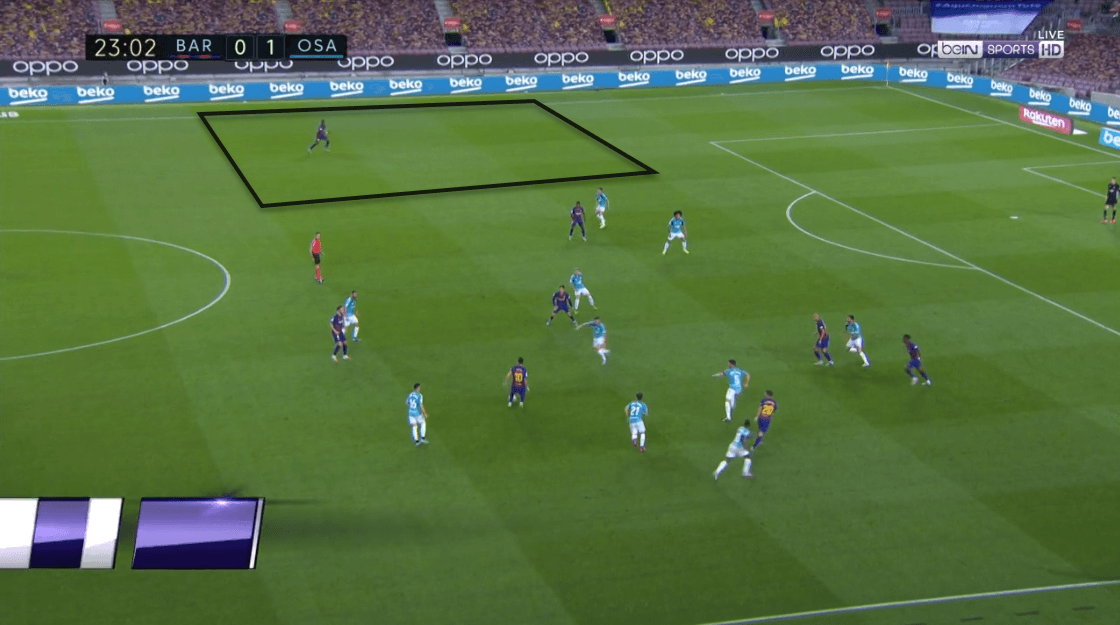 However, Barcelona’s inability to switch plays, as Osasuna executed, was a major factor for their emphasis on central play. As we can see in the above instant as well, Junior Firpo is in a position to make a run and comfortably search for a passing option is the ball gets to him. However, Barcelona. throughout the match, were not able to convert their chances. As a result, the forwards ultimately ended in a more central area, close to each other and hence looked overcrowded. 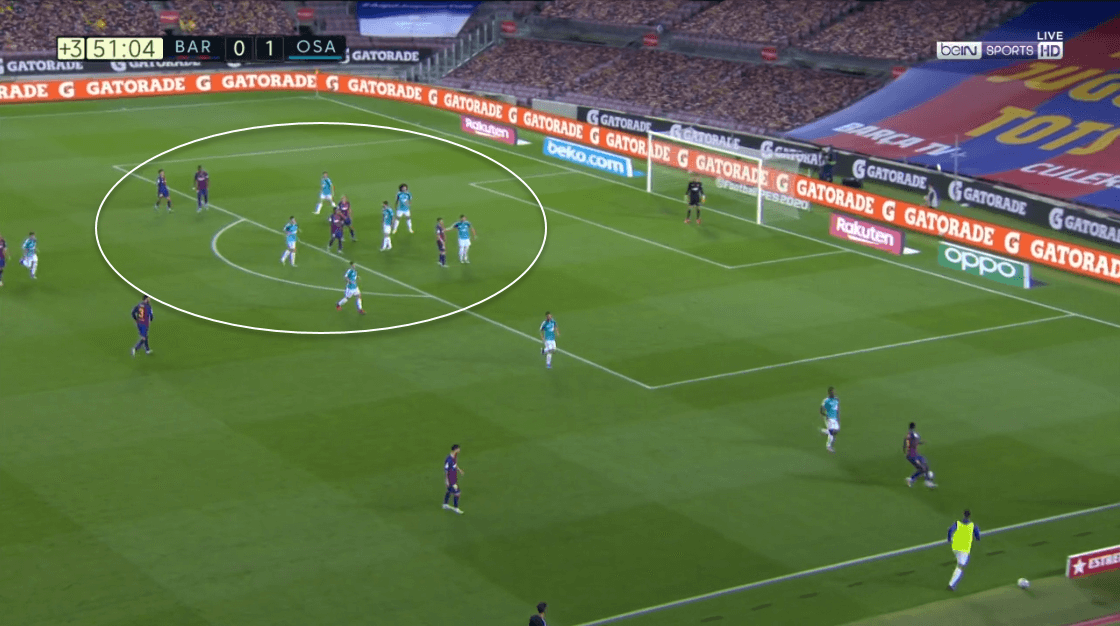 Barcelona’s central preference made Osasuna even easier to defend, as their rigid structure and attempts of defending in numbers worked for the crowded central attackers. Barcelona played straight into the hands of Osasuna, and the Blaugrana’s attempts of bringing men upfront in the centre-left them exposed towards the defensive side of things. As a result, due to Barcelona’s lack of width and effectiveness in attack, they were seen vulnerable in defence as well. Osasuna’s continuation of the five-man defence despite being a man down was an attempt to continue cancelling Barcelona’s attacks and looking for opportunities to exploit spaces left by them.

Hence, despite being a man down, Osasuna managed to score the winner in added time of the second half, due to Barcelona’s inability to cover their spaces.

With that defeat, Barcelona have officially surrendered the La Liga title to arch-rivals Real Madrid. The Blaugrana’s predictable approach in attack and the lapses have made them struggle ever since the restart.  With bigger European challenges coming soon, Barcelona will look to re-group and solve the problems that cost them the title.

On the other hand, Osasuna will be happy after the win. Jagoba Arrasate’s side did what it took to pin the defending champions down. Like this analysis suggested, Arrasate would take this as a tactical win against Quique Setién’s feeble Barcelona side.