Coming from Stade de Reims as a defensive reinforcement to Milan, Giorgia Spinelli has the potential that allows her to help her new team on all levels. She is a 25-year old Italian player who started her career in Serie A Women at Atalanta before joining Mozzanica for four years that were not really lucky for her since they were full of injuries that kept her out of the field for periods of time.

In 2015, she joined Inter Milan on loan and played 36 games in two seasons, scoring 10 goals before she got the opportunity at Stade de Reims. Her three years at this club enabled her to gain more experience, develop her skills and have more responsibility since she was the captain of this team and contributed hugely in Reims’ promotion to Division 1 Féminine.

Following her successful time at Reims, Spinelli decided to return to Italy to help Milan reach their objectives and attempt at keeping and improving her recent run of form by raising the bar of challenges.

In this tactical analysis in the form of scout report, we will be delving deeper into Spinelli’s possible roles and positions at Milan. We’ll look into her defensive abilities, tactical awareness and also her build-up performance and passing accuracy to ultimately provide an analysis of her skills.

In fact, choosing a team like Milan seems to be the right choice for Spinelli since she will be playing alongside players with experience in defence and midfield who will surely make life easier for her. This would also fasten her adaptation process and build good chemistry and team play between her and the other players which is extremely important especially in defence.

The benefit also goes to Milan, because by signing a player like Spinelli, with the experience she acquired in France and previously in Italy, she is not only capable of being central to this team through her individual performances but also could act as a second captain on the field and a leader in defence to help in organising the defensive line and guiding the whole team when out of possession.

Being a left-footed player makes her naturally more adapted to play as a left centre-back. Even though it won’t be easy to have a fixed spot in the lineup with the existence of powerful players like Laura Agard, who has just arrived from Fiorentina, and Laura Fusetti, Spinelli can still be a regular player for Milan since she has the needed requirements for convincing her coach and replacing Stine Hovland who left the team lately.

She can also be used on the left flank especially when bearing in mind that Linda Tuccerri is the team’s only left-back, and therefore, Spinelli can replace her when needed because the latter played as a left-back and even as a left-winger during her teenage years at Atalanta and she is familiar with that role.

Moreover, when looking at Milan’s tactics, and given the new arrivals to the team, Milan can possibly switch to playing with three defenders in a 3-5-2 formation in some matches since they have the players needed for such formation. A possibility that would also suit Spinelli who will more likely form a defensive trio with Agard and Fusetti in this case. 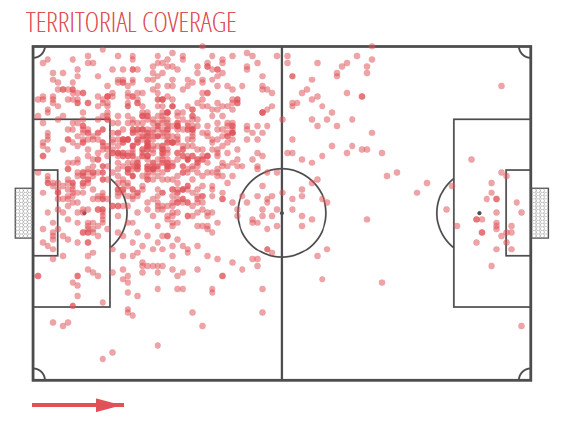 Spinelli is a strong, intelligent and tough defender for all strikers since she has some outstanding physical performance and agility that allow her to do very well especially in 1 vs 1 duels and marking.

She knows when and how to push the opposition out of the penalty area without necessarily committing fouls, preventing their possible passes or individual penetrations in that dangerous zone and obliging her opponents to retreat. Like in this example against Olympique Lyonnais, where Spinelli disturbs her direct opponent and goes forward to oblige her to either pass the ball or move backwards. 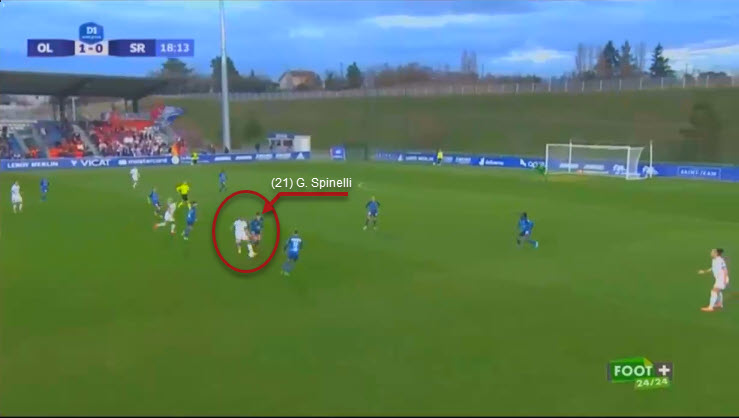 Moreover, Spinelli is usually very attentive when marking strikers. She does not give up on marking them even when they move backwards asking for the ball, which contributes to limiting the opposition’s passing options. Standing right behind the striker, like in the following picture, before the striker receives the ball, is fundamental for her to be able to read the action before it starts and anticipate the movement of her direct opponent to disturb her and ultimately intercept the ball.

In this game against Paris Saint-Germain, she was marking the PSG striker as the picture shows and when she was about to receive a pass, Spinelli anticipated this action and followed her tightly to make her only able to pass the ball back. And when this striker returned to the penalty area to receive a cross, Spinelli did not lose her and intercepted the ball that was coming to her during the same attack.

This shows the determination of this defender and her concentration and intelligence when marking her opponents. 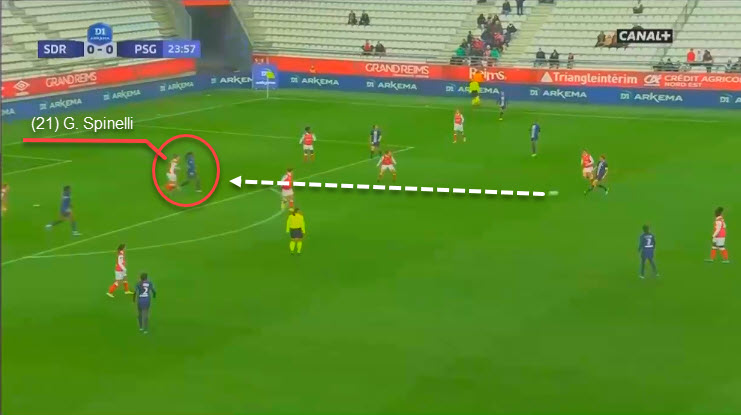 She has a low percentage in defensive duels which indicates 29.3% won, and only 20% in 1 on 1 defending, which are percentages that need to be enhanced during the coming seasons if she plans on becoming a more complete defender. Despite that, Spinelli definitely has the defensive skills needed for closing down any player.

And as we saw above, her capability of intercepting passes is striking, and in this regard, she has 63.1% successful pass interceptions per game. Also, she is quite good in the air since she wins an average of 50.8% of aerial duels per game. Not only that, but she also defends in midfield at times when her direct opponent asks for the ball in the centre. And after successfully winning the ball, Spinelli is capable of contributing to other areas too. 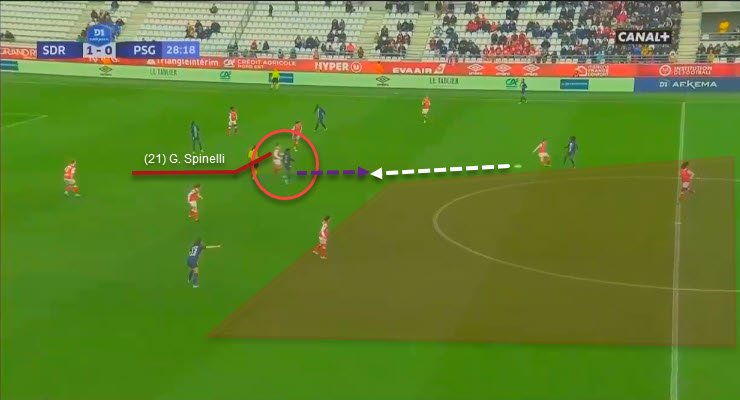 Traditionally speaking, defenders usually lack agility and attacking skills. Yet, some players create the exception in nowadays football and perform surprisingly well when they get the chance to advance to their opponent’s own half. Spinelli is one of those players who are good with their feet and who are also creative when they have the ball.

In other words, not all defenders make accurate and smart passing choices when they happen to have the ball in midfield or in the build-up phase, but Spinelli is one of those defenders who can make smart decisions and create chances from nowhere thanks to both her tactical intelligence and technical abilities.

To explain this further, let’s go back to the previous example in which Spinelli marked her opponent and anticipated her movement before the ball reached her and intercepted it. Afterwards, she found herself standing in the middle of three teammates and without any disturbance from PSG players.

That’s what made her decide to accelerate and reach the opposition’s own half and pass the ball to her teammate while acting like a trequartista like the following picture shows. 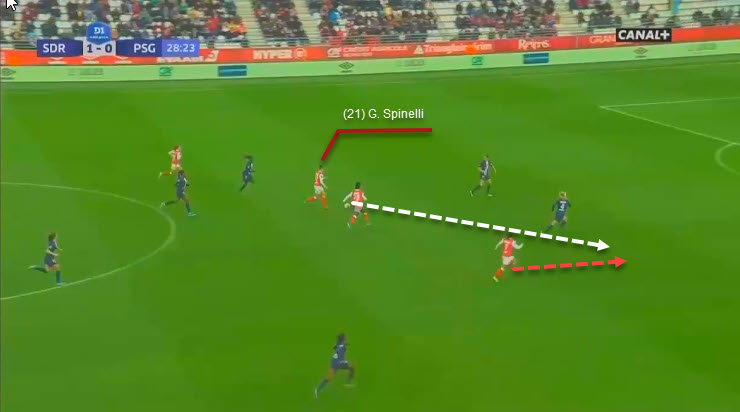 In addition to these skills, Spinelli can also be very useful in the build-up since she has 83.7% pass accuracy, with 93.2% accurate back passes, 61.7% forward passes and 63.2% long-ball accuracy, which are quite impressive percentages for a defender.

These are not only theoretical words or just statistics, Spinelli has already proved that she can have a solution when the team fails to find attacking solutions.

By crossing balls to Valentina Giacinti, Natasha Dowie, Valentina Bergamaschi or any of Milan’s forwards behind the opponent’s defensive line, she can create clear scoring chances with just one touch like in the following example.

When she played with Milan two weeks ago against Ajax in a friendly encounter, she launched this accurate long-ball right in front of Dowie and in the back of defenders, paving the way for the latter to score a goal.

The fact that Spinelli used to play as a left-winger and also with Valentina Giacinti in attack when both were at Atalanta allowed her to become tactically intelligent and familiar with strikers’ movements and helps her to execute the right decision when she gets the opportunity to move forward. Also, her experience in midfield and attack developed her dribbling skills, and nowadays, Spinelli has an average of 86.4% dribbles won per game. And this proves that she is a very technical player even though she is a defender.

This season can be a very good one for Spinelli since she has just went back to play in her country and at a big club like Milan. This; alongside playing with talented and experienced players, will definitely help her to be mentally ready to do well in Serie A and why not in Women’s Champions League next season.

Moreover, playing regularly at Milan and at an advanced level would attract the interest of the Italian national team since this seems like the right time for her to have international experience with her home country.