Rotherham United won promotion back to the Championship at the first time of asking last season, with Paul Warne’s men finishing second in the division by points per game. As a small, sensibly run club, the Millers will have to punch above their weight to survive in the second tier next season. Recruiting smartly will be central to that.

So far, three of their four new additions have been free transfers, and one of those is Kieran Sadlier. The English-born Irish midfielder joined Rotherham from local rivals Doncaster Rovers after he failed to agree a new deal with the League One club.

This scout report will provide a tactical analysis of Sadlier’s game, shining a light on what he’ll add to the Championship newcomers.

A direct winger who is comfortable playing on either flank, Sadlier managed an impressive tally of 11 goals for Doncaster last season. The 25-year-old started 14 games on the left side, and 10 games on the right, predominantly playing as a wide man within Darren Moore’s 4-2-3-1 tactics. Sadlier was also sometimes deployed as a striker, which demonstrates his versatility. Because of this, his heat map shows that he’s covered pretty much every area of the final third pretty frequently. 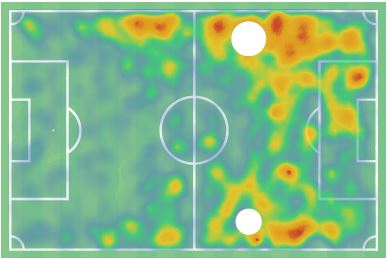 An aspect of Sadlier’s game that immediately stands out is his goalscoring exploits. He averaged 0.36 non-penalty goals per 90 minutes, which was the joint second-best strike rate out of all the wingers in League One last season. Not only is he a goalscorer, but he’s a scorer of lots of different types of goals. He’s capable of ghosting into the area to get onto the end of crosses, and he’s pretty clinical when he arrives in the area. Interestingly, Sadlier managed to score three headed goals last term. Only Lincoln City’s Harry Anderson scored more headers as a winger. He’s also capable of ghosting into the area and scoring from close range.

Below is a graphic of all the shots he’s taken in the last calendar year. It shows how the former West Ham United academy product scores from different ranges. 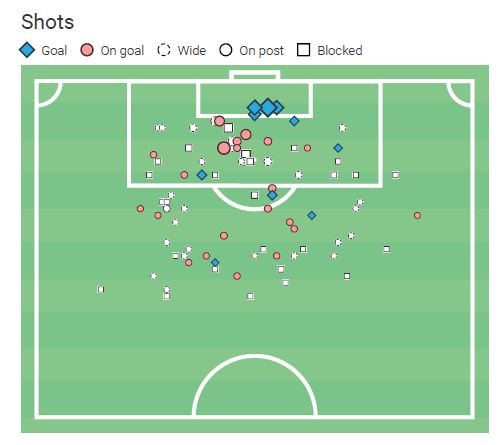 Sadlier needs no second invitation to shoot. He averaged 2.81 shots per 90 minutes, which was the joint-most out of all wingers in the third tier.

He can drift in and out of games, but Sadlier is more than capable of producing moments of magic out of nowhere. The example below is from Doncaster’s clash against Peterborough United. 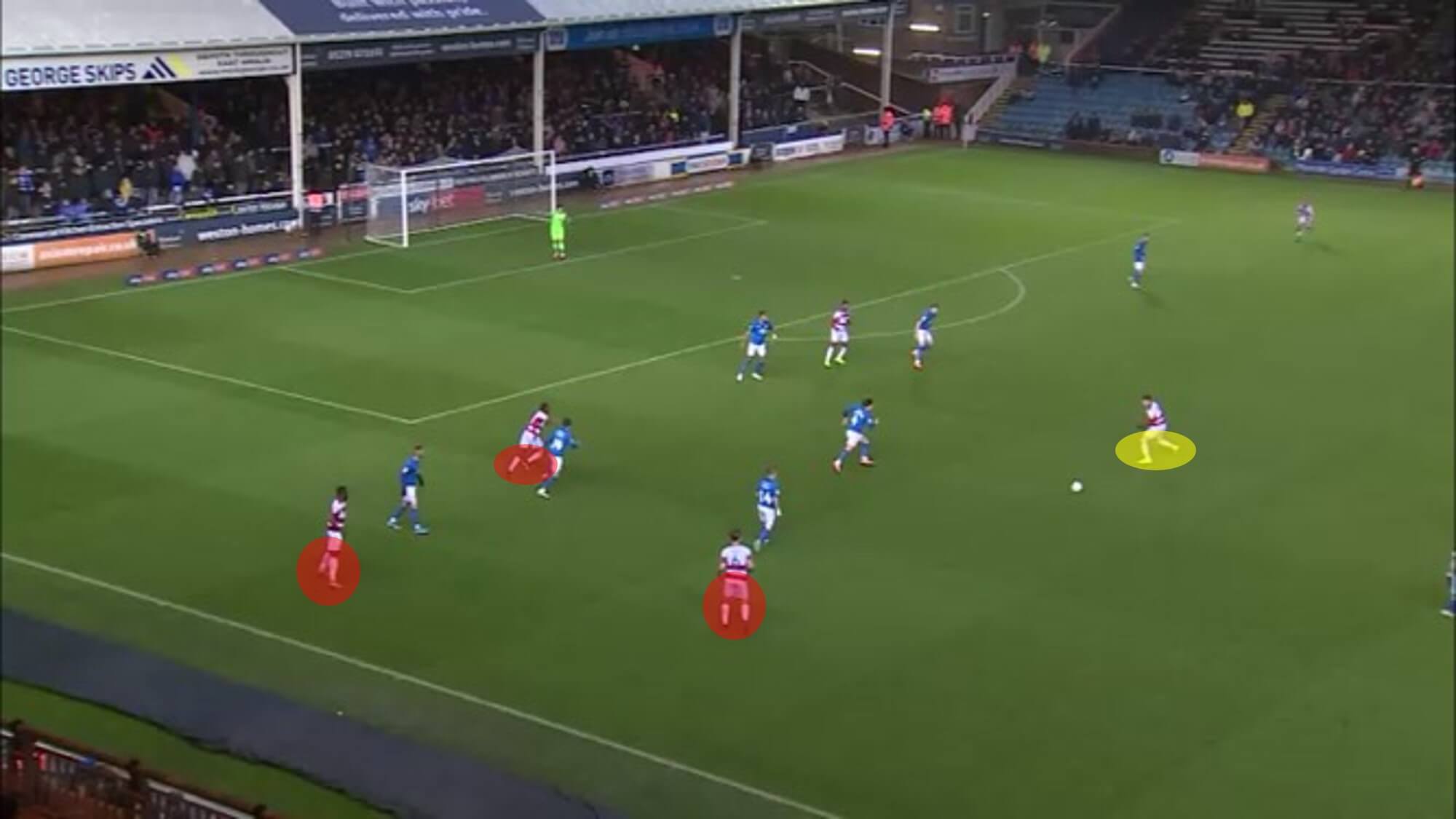 Doncaster have three wide players occupying the wide zone, which draws four Peterborough players into that area. That means space has opened up in the middle, so Sadlier drifts infield. He’s excellent at doing this when coming in off the left flank, because he can work the ball onto his stronger right side and have a go at goal. When the ball came to him, he let it run across his body onto his right foot instead of taking a touch. Then he unleashed a stunning first-time strike into the bottom corner, catching out the goalkeeper, who wasn’t expecting the first time effort. 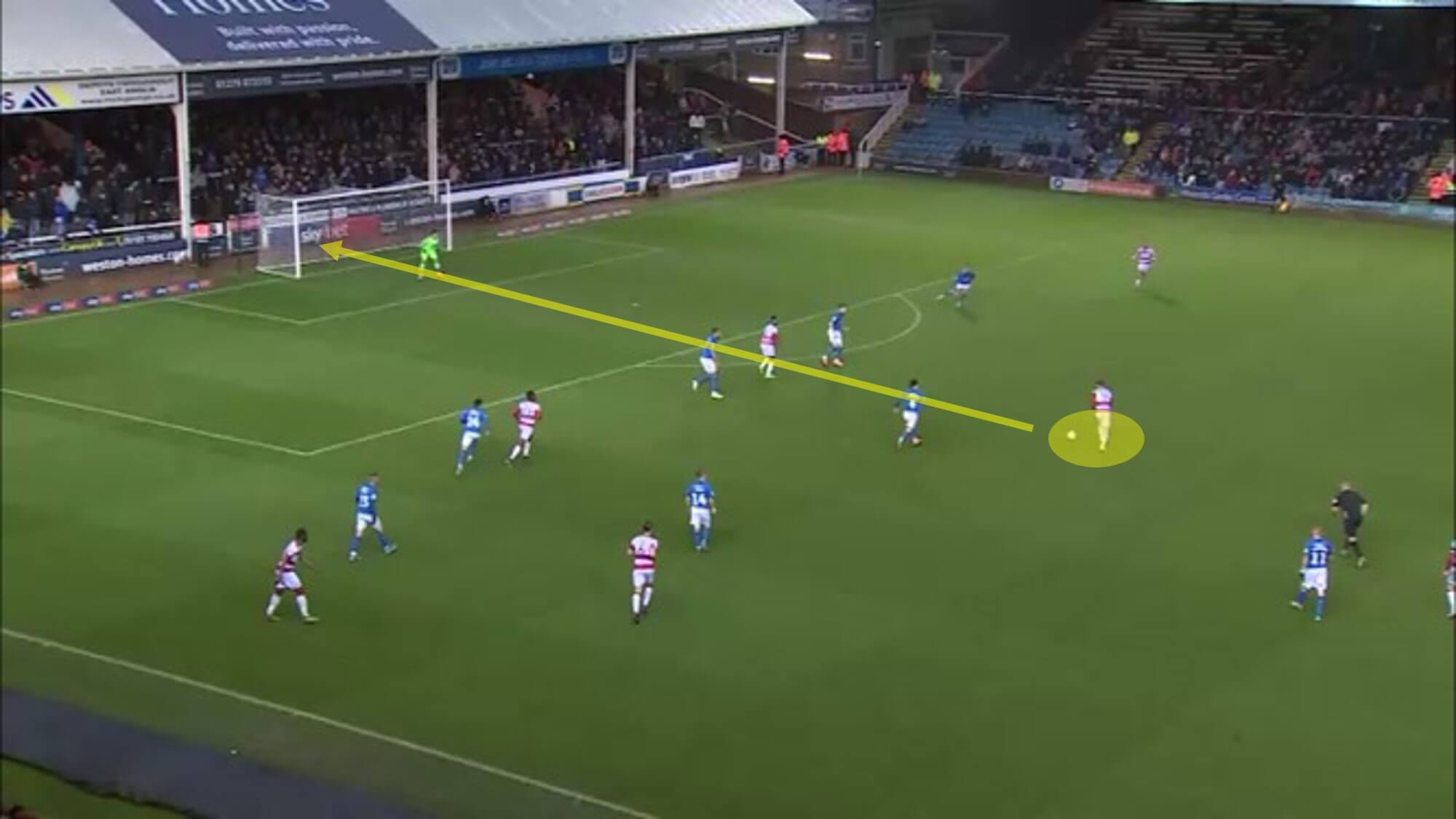 When playing on the left side, he’s a huge threat when he cuts inside onto his right foot. In the image below, Sadlier is leading a counter-attack for Rovers. 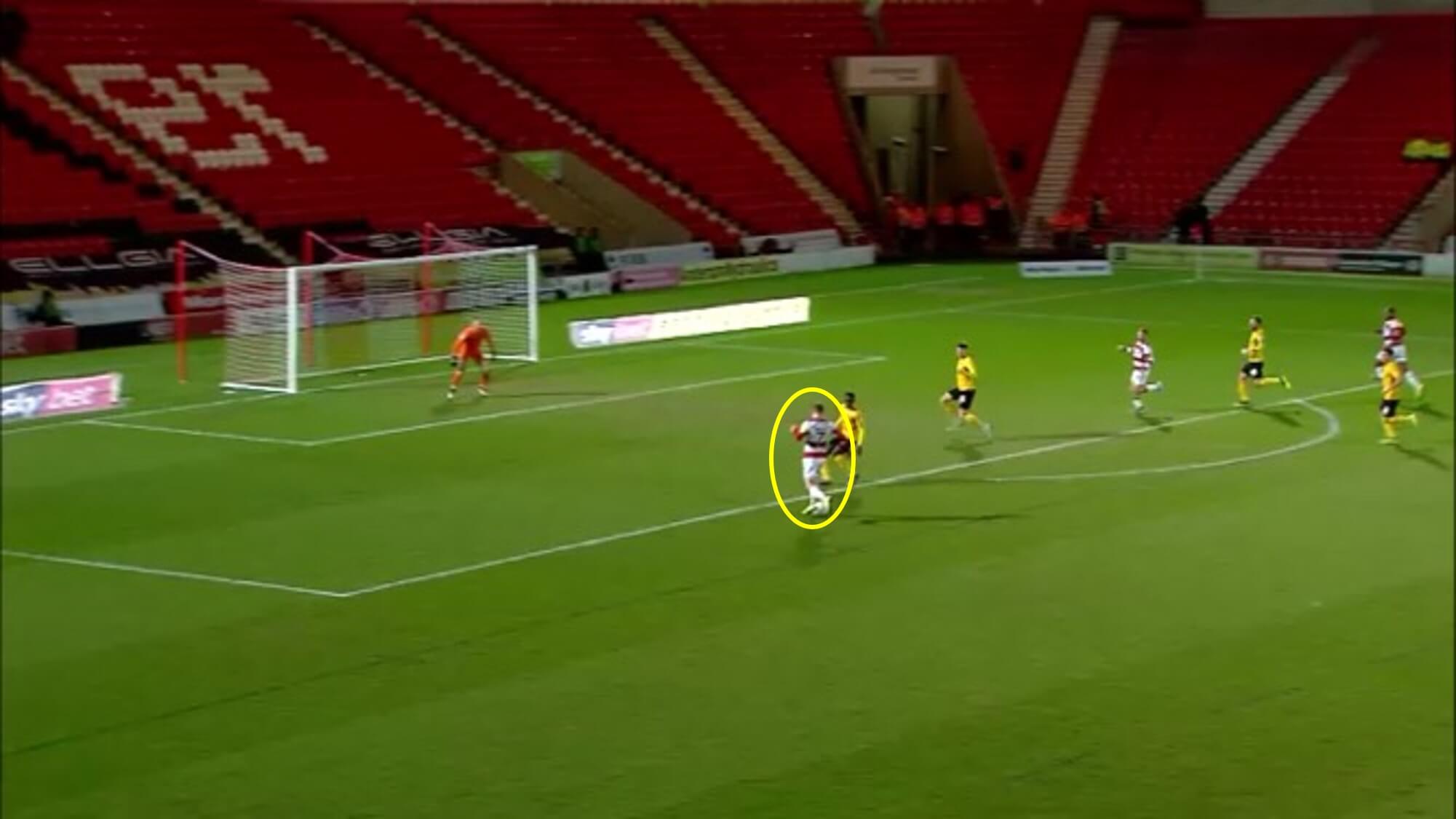 He then faces up to the defender in a one versus one, before nonchalantly dropping his left shoulder. The 25-year-old then buys half a yard of space to touch the ball with the outside of his right boot, taking it slightly away from the defender. Using the second defender’s body (behind the ball) as a guide, Sadlier then opens up his body and curls the ball into the far corner, a technique used famously by Arsenal legend Thierry Henry. 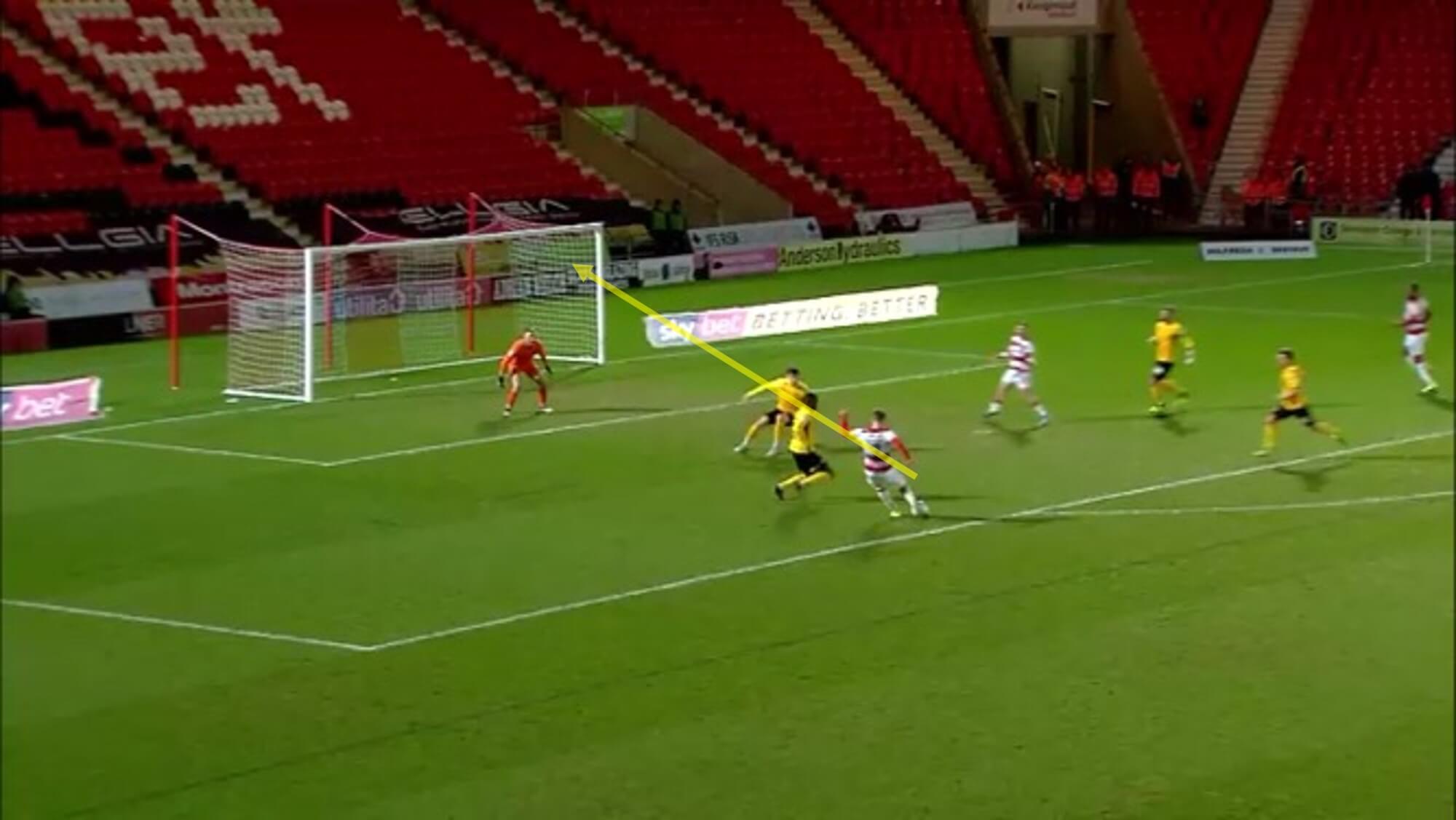 But, as we said, it’s not just eye-catching long-range goals that Rotherham’s new man scores. He also shows his footballing intelligence by impressively finding space in the area, often ghosting in unmarked to get on the end of crosses. The next couple of images are an example of his ability to find space in the box. 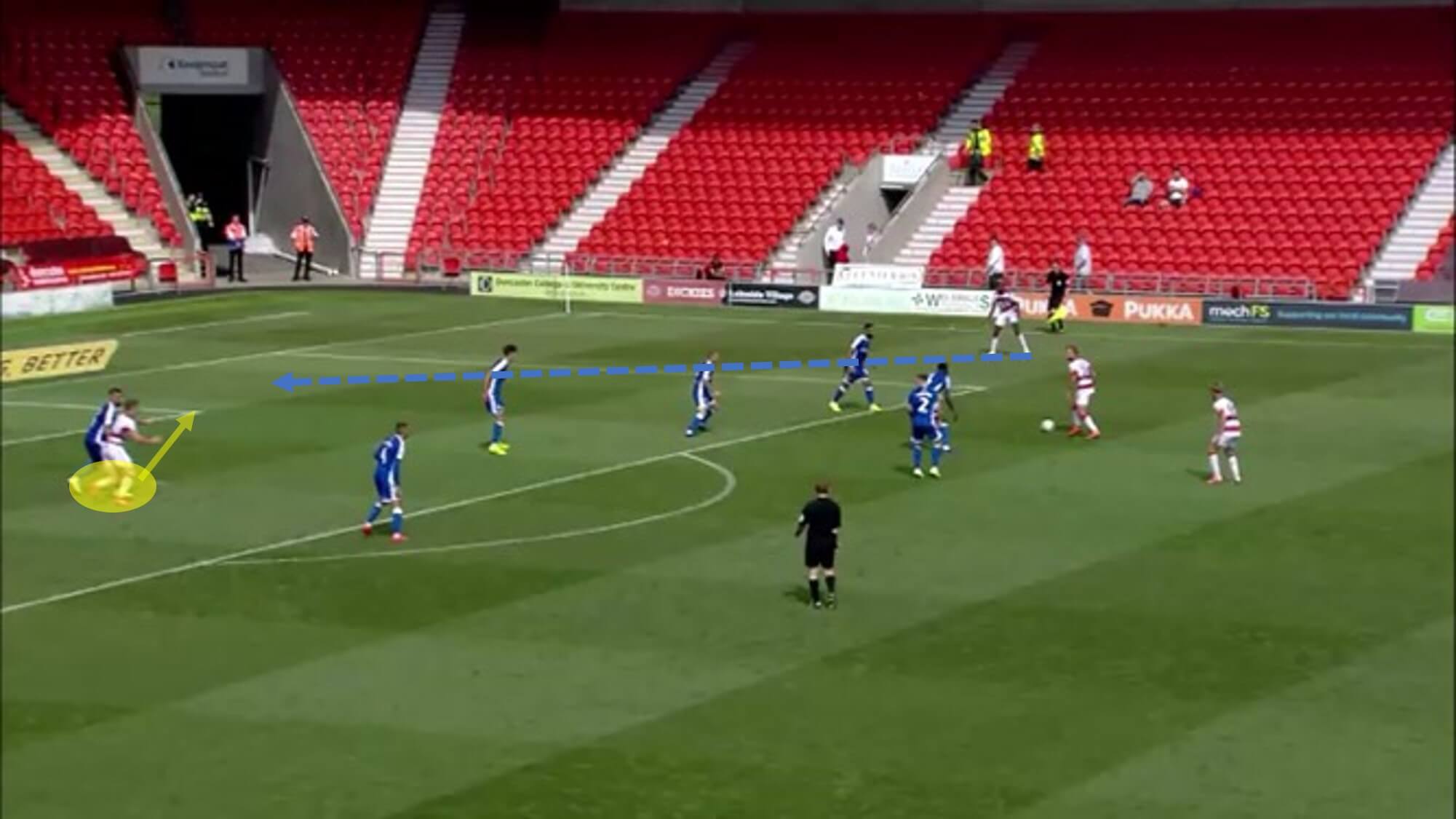 Sadlier is playing on the inside shoulder of the opposing right-back, and he identifies space in behind the opposition’s central defenders. He makes a run across the line, on the blindside of the two central defenders. Sadlier knows that James Coppinger is likely to play a lobbed ball into the space behind those defenders. Sadlier then watches the ball come over his shoulder, before firing an instinctive volley into the net. 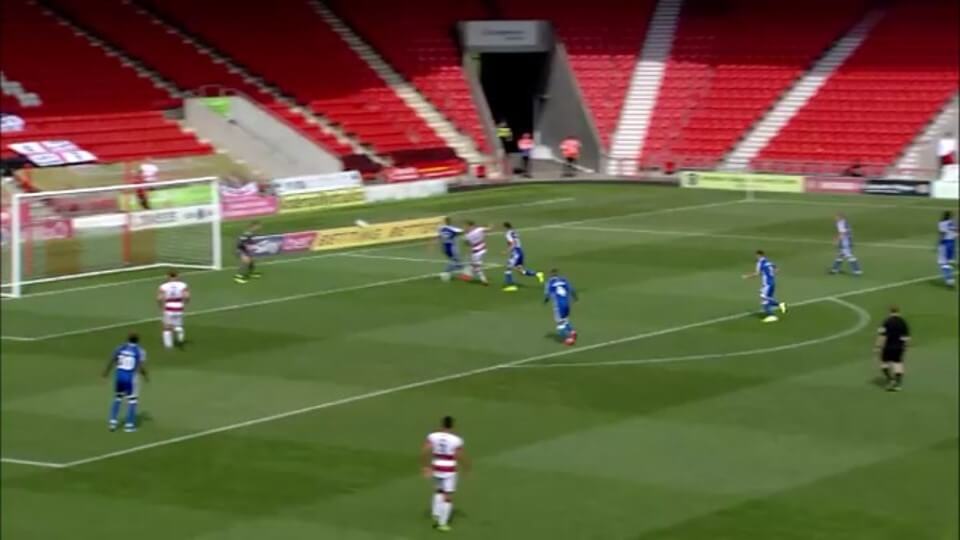 The understanding between those two was telepathic for that goal. His knack of being able to find space in the area is reflected by the fact he averaged 3.87 touches in the box per 90 minutes, which was the second-highest out of all out-and-out wingers.

‘If you don’t shoot, you don’t score’ is a typical footballing cliché, and it’s certainly a belief that Sadlier seems to subscribe to. Of course, if he didn’t shoot from range as often then he may not have scored some of those fantastic long-range screamers, and there’s a certain element of needing to take the rough with the smooth. But there are occasions when Sadlier can frustrate supporters by shooting from range, when it isn’t always the best option.

In the example below, the winger decides to shoot from a difficult position against Milton Keynes Dons. 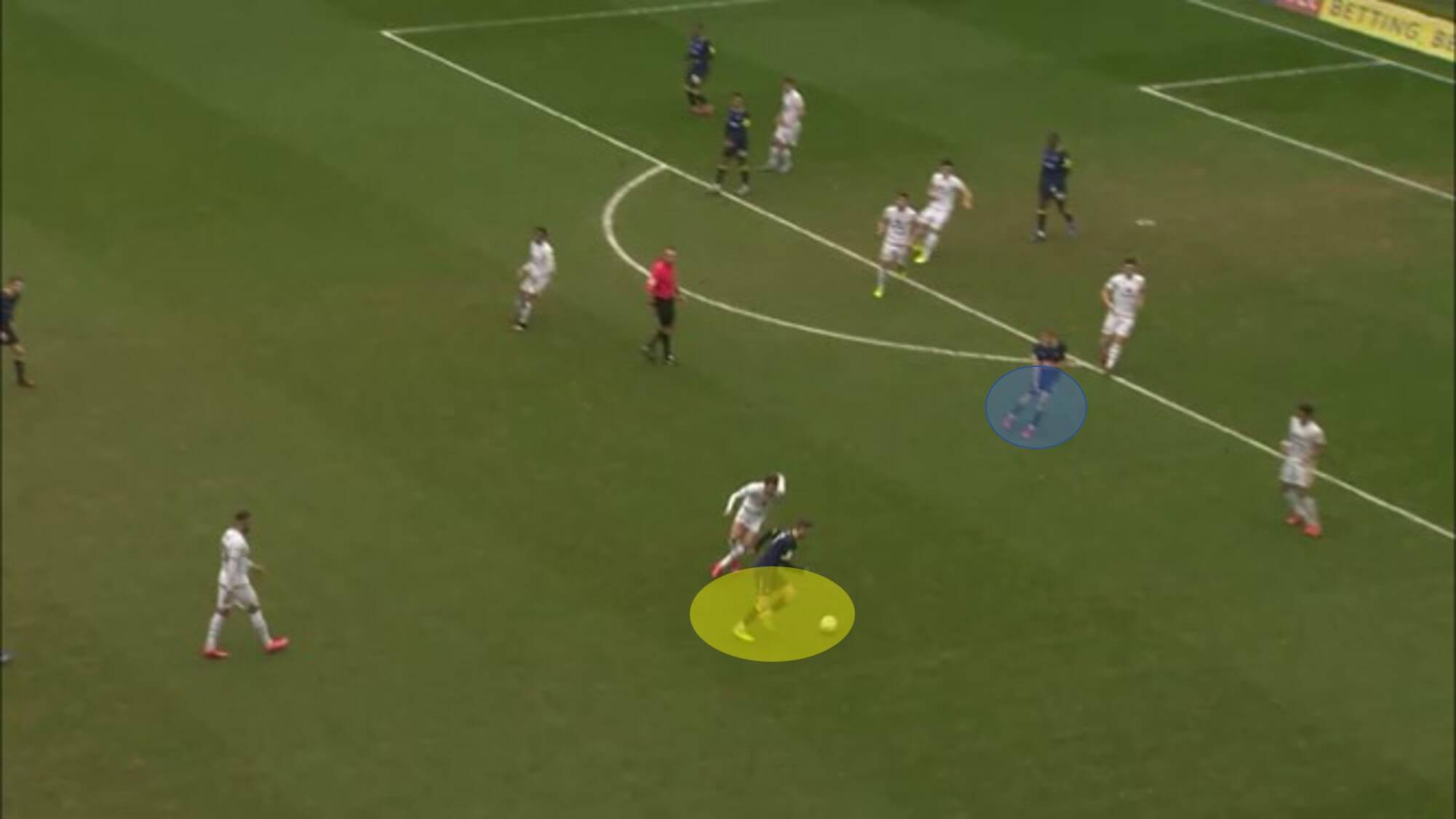 As you can see, he could have looked for his teammate in a slightly more advanced area (circled) and gone for the return in behind. This would have been more likely to see Doncaster break through the line of the MK Dons defence, therefore working the ball into a better area to get a shot or cross off. 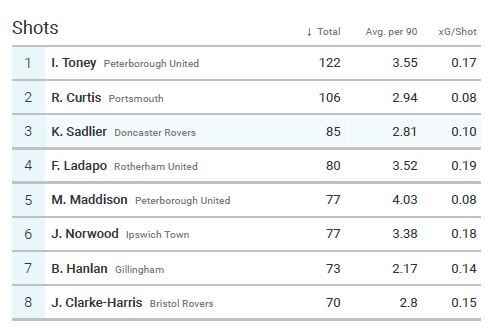 The graphic above shows that Sadlier has taken the third most shots out of all players in League One over the past calendar year. Notice how the average xG of his shots was 0.10, which is pretty low. This suggests that he often takes shots from areas where he’s less likely to score from.

Sadlier is a player who is always looking to create chances, and he enjoys running directly at defenders. He averaged 4.8 dribbles per game, which was well above the median for the league. The former Irish youth international is excellent at progressing the ball as well. 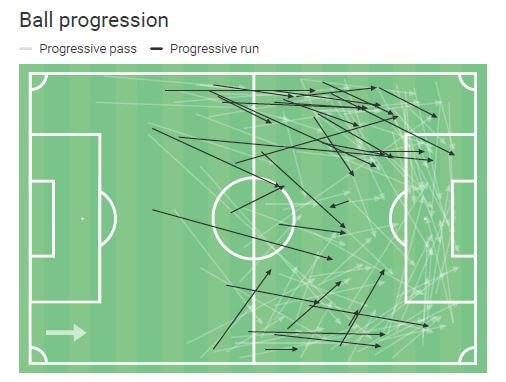 Sadlier is more adept at progressing the ball through running and trying to take people on than passing.

When he’s about to receive possession in wide areas, he receives the ball often on his back foot with an open body shape. In the image below, he receives the ball on his right foot, and immediately begins to dribble forward, instead of taking a touch inside. This allows him to get the ball out of his feet and run at the full-back in a 1v1 situation. 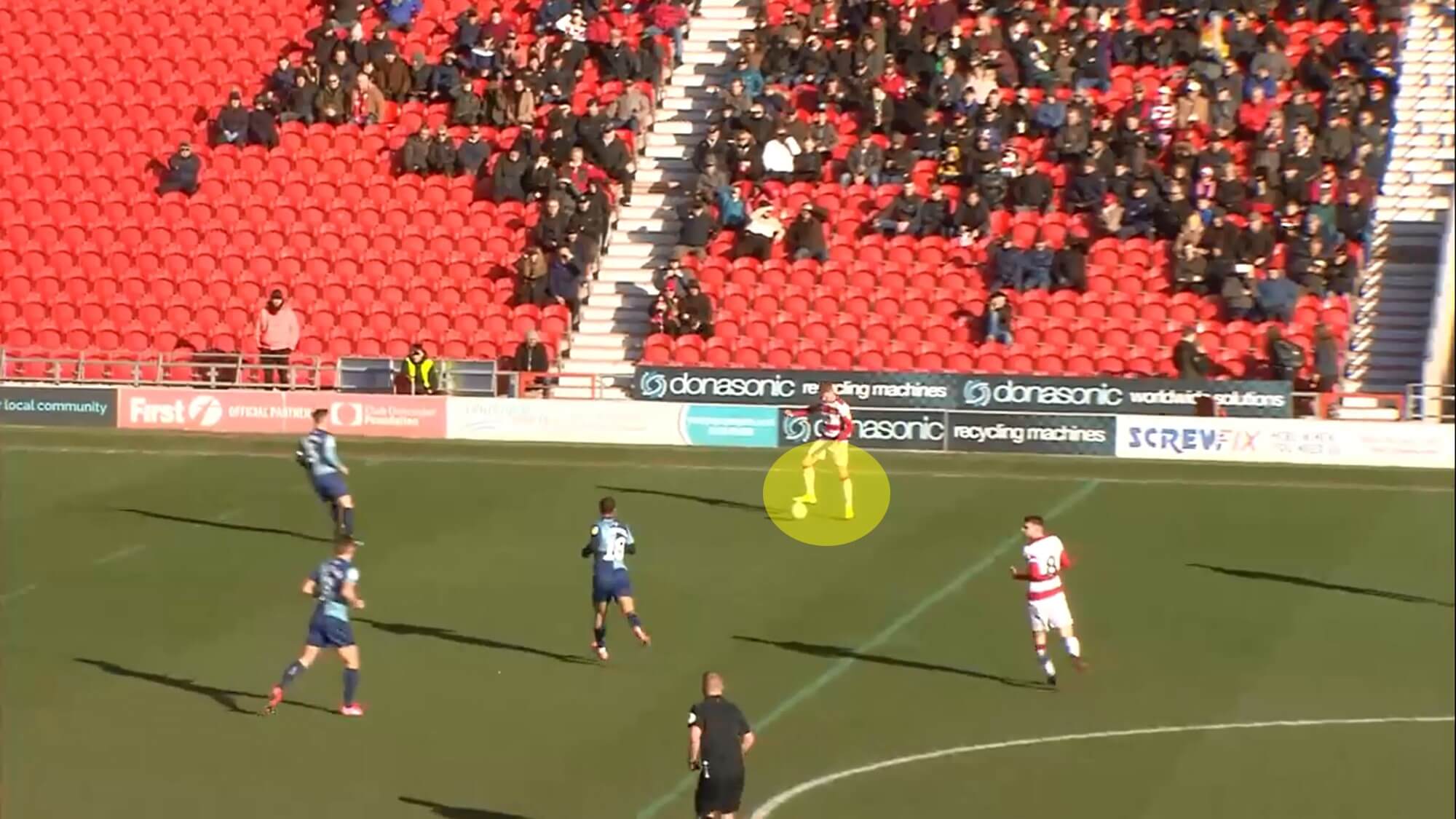 He relishes the opportunity to run at defenders. In terms of his dribbling style, Sadlier tends to take big long strides so he can travel with the ball as quickly as possible, whilst taking it away from oncoming defenders. He’s also more than capable of pulling off a quick trick or changing direction whilst running at defenders.

In the image below, from the same passage of play, he looked as if he was going to take the ball on the inside of Wycombe Wanderers full-back Joe Jacobson, as he was taking the ball in a straight diagonal line. However, he managed to quickly swivel his hips to change the direction of his body, and went to dribble on the outside of Jacobson instead. 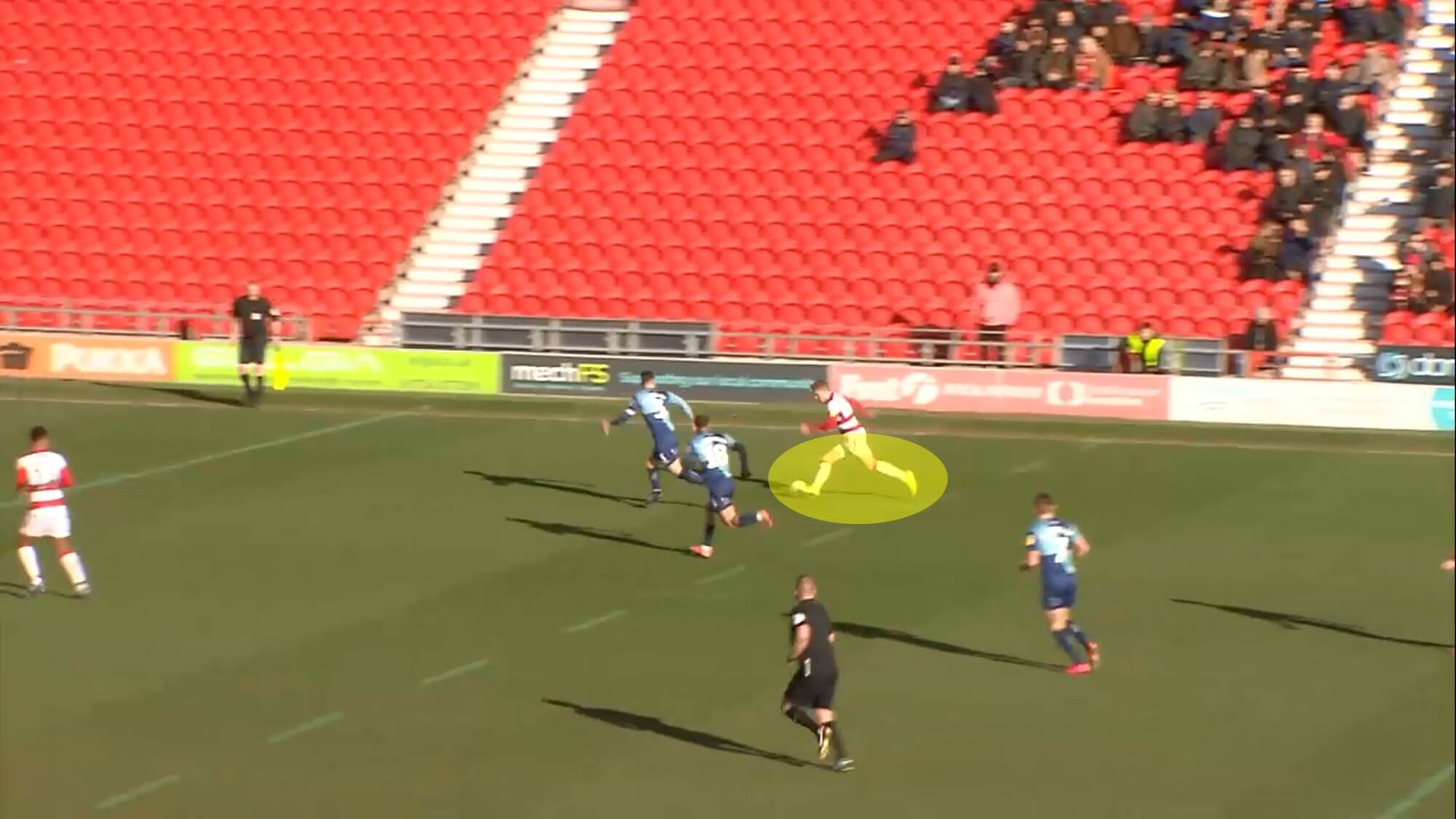 He gave himself half a yard of space on Jacobson with that quick and slight change of direction, as the defender was preparing to try and stop him from taking the ball down the inside.

Sadlier is also an accurate crosser of the ball. His crossing accuracy of 30.23% was way above the median for wingers in the third tier. When he’s in a crossing position, he’ll generally look to pick out a teammate in the box, rather than pulling the ball back into an area for a teammate to attack. The new Rotherham recruit also averages 0.17 expected assists per 90 minutes, which is comfortably above the median.

The analysis will now briefly focus on the defensive side of Kieran Sadlier’s game. He averages 3.81 successful defensive actions per 90 minutes, which is around the league median. This suggests that he’s fairly active defensively, especially when you consider the fact that he’s playing in a 4-2-3-1 system. So, in theory, there’s less pressure on him to get back than a winger who plays in a 4-4-2. Impressively, Sadlier came out on top in 61.4% of his defensive duels.

When watching him in-depth, you can see that he’s very switched on when the other team has possession. He’ll usually track and match the run of the other team’s full-back when they attempt to move into advanced areas, like in the image below. 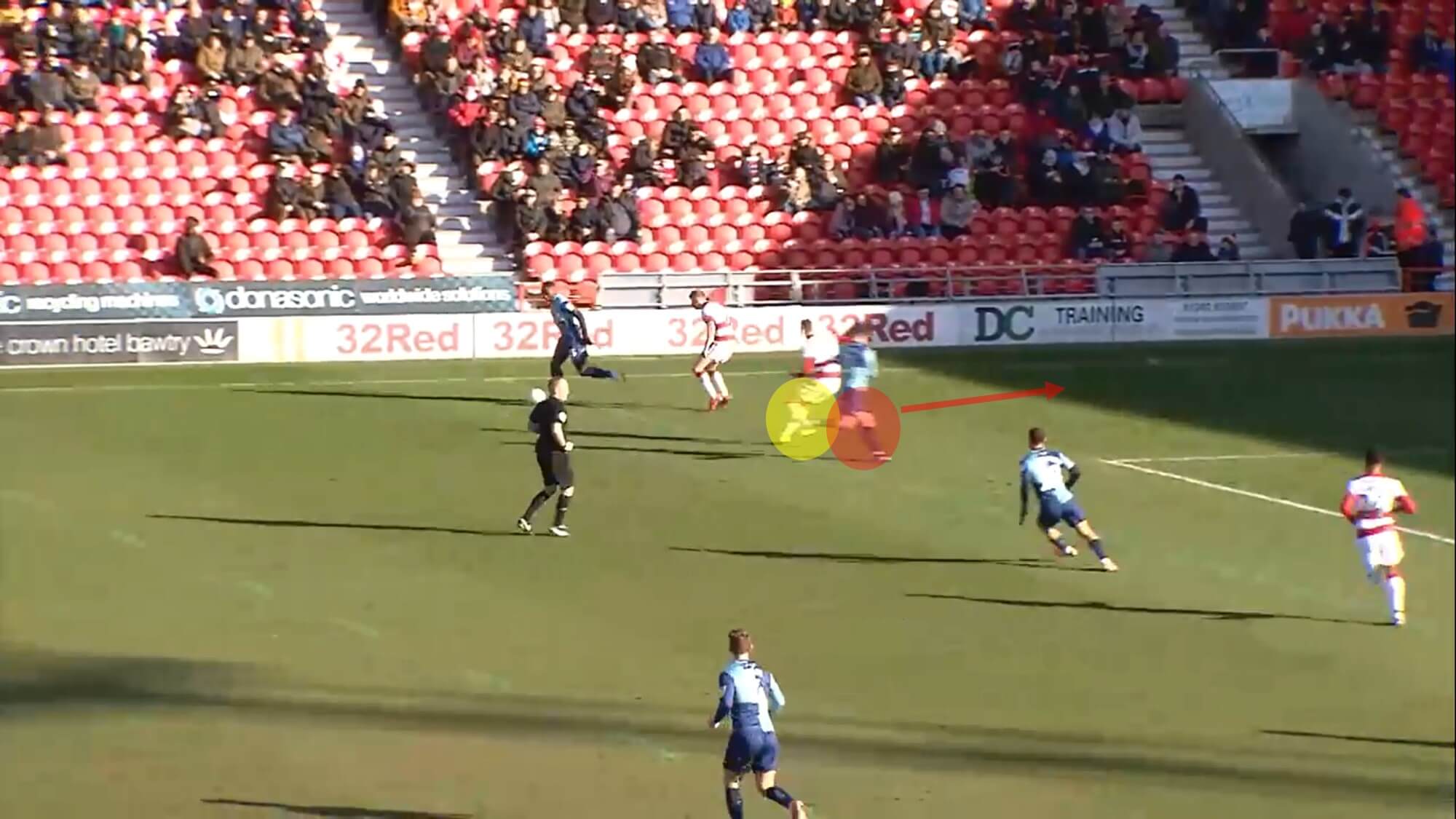 He’s also keen to ensure that his full-back doesn’t get left isolated in a 1v1. In the final image, Sadlier works back to help out, even though Jacobson hasn’t chosen to make a supporting run. The former Cork City winger had just pressed the goalkeeper in the penalty area seconds earlier, so his eagerness to get back in this phase of play demonstrates his work rate. 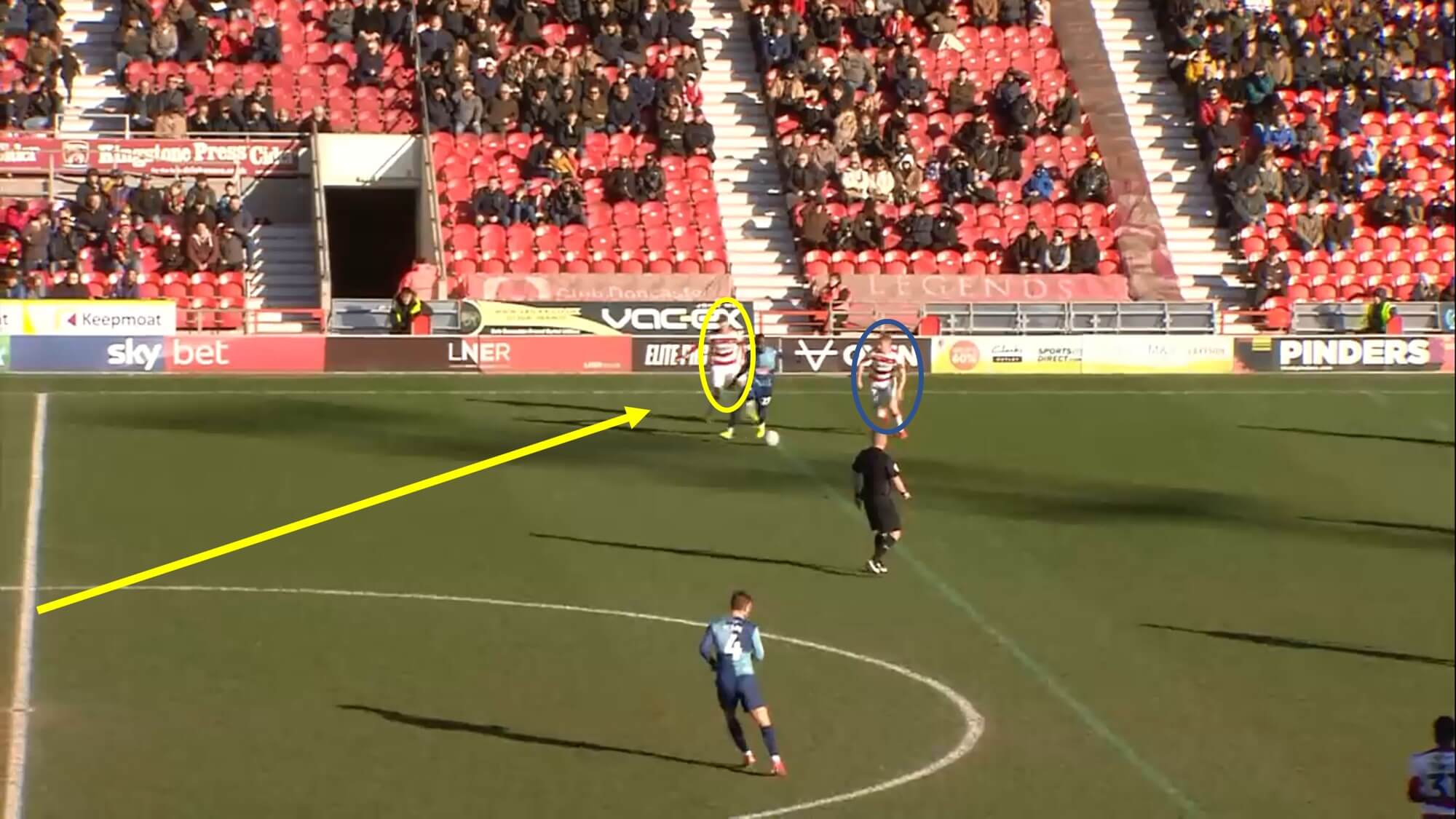 There’s no doubt that Sadlier will be able to provide those moments of quality that can be so decisive in tight games next season, even though he’ll have to adapt to playing at a higher level. Rotherham fans and Paul Warne will be hoping that he’ll continue developing his game, so he’s able to consistently make an impact in Championship clashes.