The first Manchester United and Chelsea game of the 2020/21 FAWSL season kicked-off on Sunday 6, September in a warm day at Leigh Sports Village and ended with a 1-1 draw that seemed like a loss for Chelsea who missed a lot of chances. It was well-deserved point for Manchester United since they did not give up and did their best to equalise even when they were behind.

This first clash of the season was full of action from both sides and was fun to watch for women’s football fans in general and Manchester United and Chelsea fans in particular.

It is true that the result serves both teams’ opponents at the start of the new season and especially Manchester City who are more likely to battle with Chelsea over the league title, yet, this match can be used as a catalyst for Chelsea to step up their game and do better in the upcoming fixtures, especially in terms of finishing efforts.

For Manchester United, this draw will give more confidence to the whole team who can build on their performance to do even better in the next matches as they look forward to competing for the top three spots. This result will help them believe even more in achieving this goal.

In this tactical analysis, we will provide an in-depth analysis of the match while focusing on both teams tactical plans, flaws and things that went well for them in terms of tactics. Also, influential players’ contributions will be highlighted and studied to see how they were able to make the difference for their respective clubs.

In this opening fixture, Manchester United  preferred to play with a 4-2-3-1 lineup composed of four defenders at the back  which are Kirsty Smith and Abbie McManus as centre-backs ahead of Mary Earps, the team’s goalkeeper, while Millie Turner and Ona Batlle played as full-backs.

In midfield, Casey Stoney, the team’s coach, relied on both Katie Zelem, the team’s captain, and Hayley Ladd for midfield duties while playing with Ella Toone as an advanced playmaker behind Kirsty Hanson and Leah Galton who played on the wings, and Jane Ross, the team’s striker.

Concerning the visitors, Emma Hayes, the team’s coach, played with a 4-1-4-1 lineup made up of Carly Telford as a goalkeeper and a powerful defensive line with Maren Mjelde on the right and Jonna Andersson on the left while the team’s captain, Magdalena Eriksson together with Millie Bright are the two centre-backs.

In midfield, Ji So-yun, Melanie Leupolz and Sophie Ingle played as central midfielders who often exchanged positions to be balanced both in defence and in serving their striker Sam Kerr but most of the time Sophie Ingle was the one playing ahead of defence as a defensive midfielder and Ji So-yun, Melanie Leupolz formed the midfield line with Fran Kirby and the Norwich Guro Reiten on the wings. Emma Hayes left plenty of talents on the bench such as Bethany England, the new signed Pernille Harder and many other interesting players. 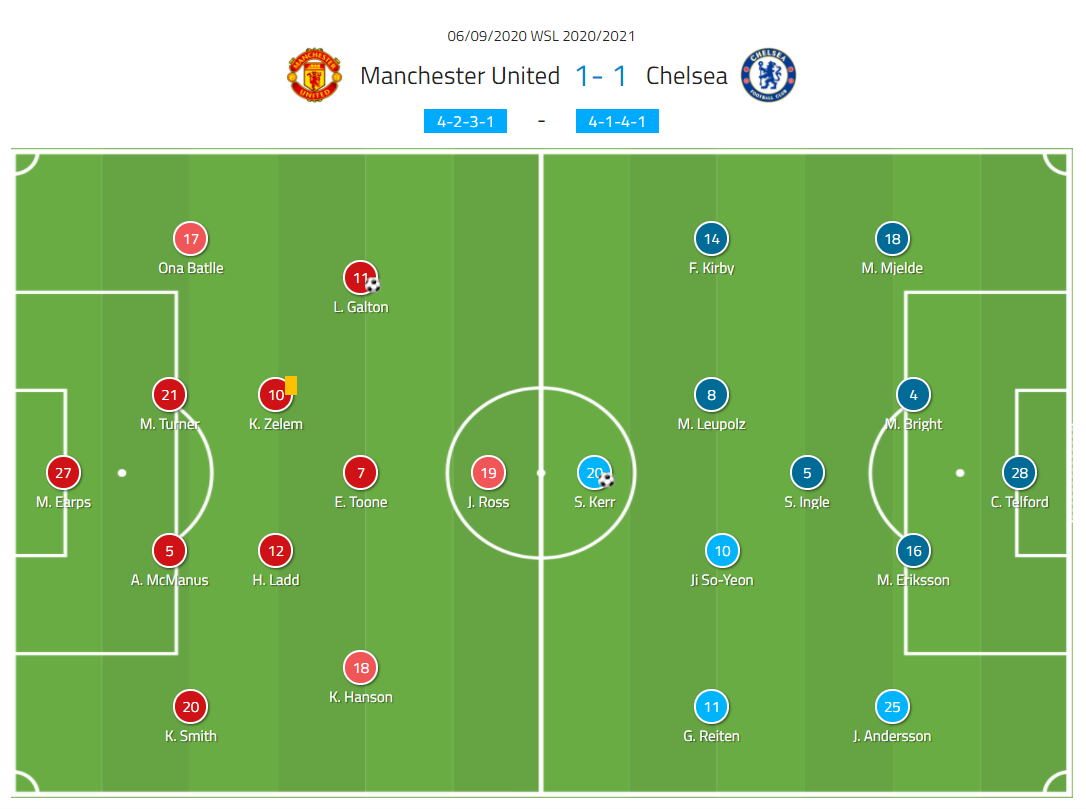 A promising and competitive Manchester United

The Red Devils started this match in the best possible way by pressing high on Chelsea’s defence and obliging them to make mistakes in their own half especially in the first 20 minutes. It was an intelligent plan from Casey Stoney to minimise the danger of letting Chelsea build from the back, knowing that if they are allowed much space, they can be very dangerous and Manchester United would end up losing the midfield to Chelsea and therefore conceding a lot of goal scoring opportunities.

You can see in this picture how this well-organised high pressing disturbed Chelsea’s defence since all players were consistently marked and players who had the ball were always left with few options. 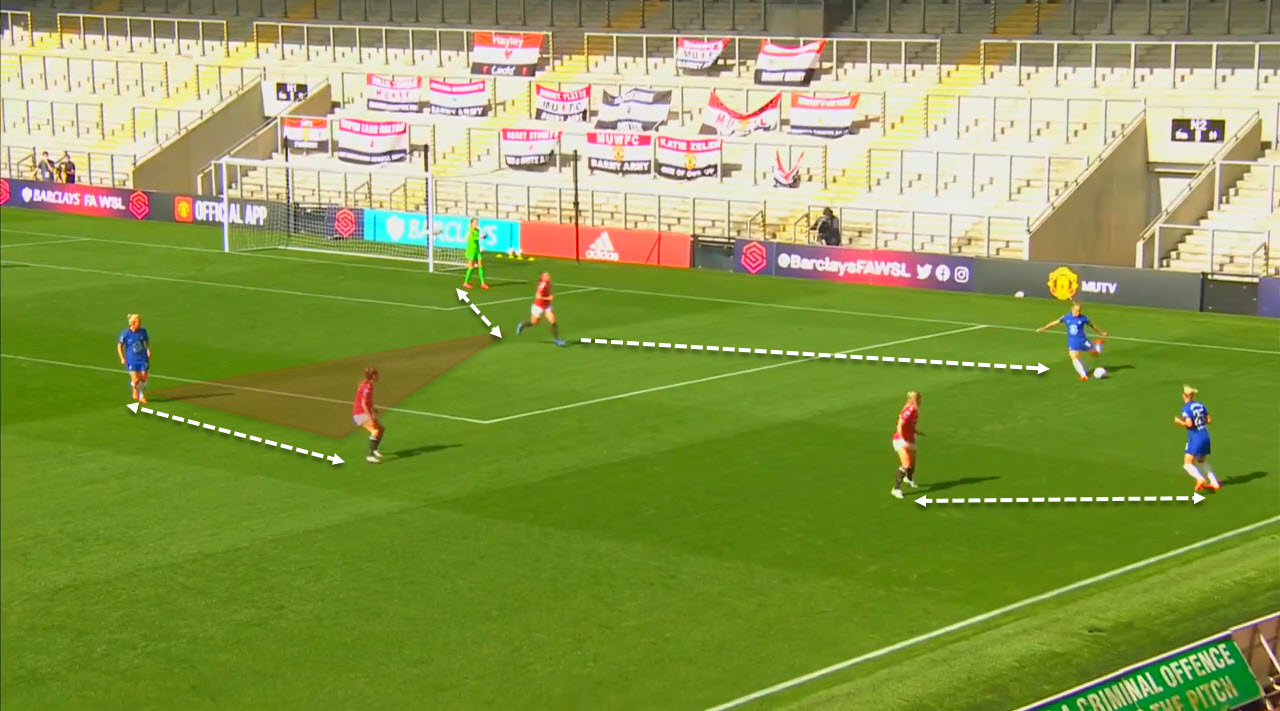 However, due to Chelsea’s strong midfield but more importantly Manchester United’s lack of precision and lack of final pass accuracy, the local team were not able to exploit the efforts done in pressing and were not able to create tangible chances built from the back since they have always made mistakes in the final and crucial pass and gave the ball away to Chelsea quite often.

One of Chelsea’s actions led to a goal from Sam Kerr due to a mistake of marking from Kirsty Smith. Yet, there are doubts that this goal is actually not merited since it could have been considered as offside as the picture shows, but this is the job of the specialists anyways. 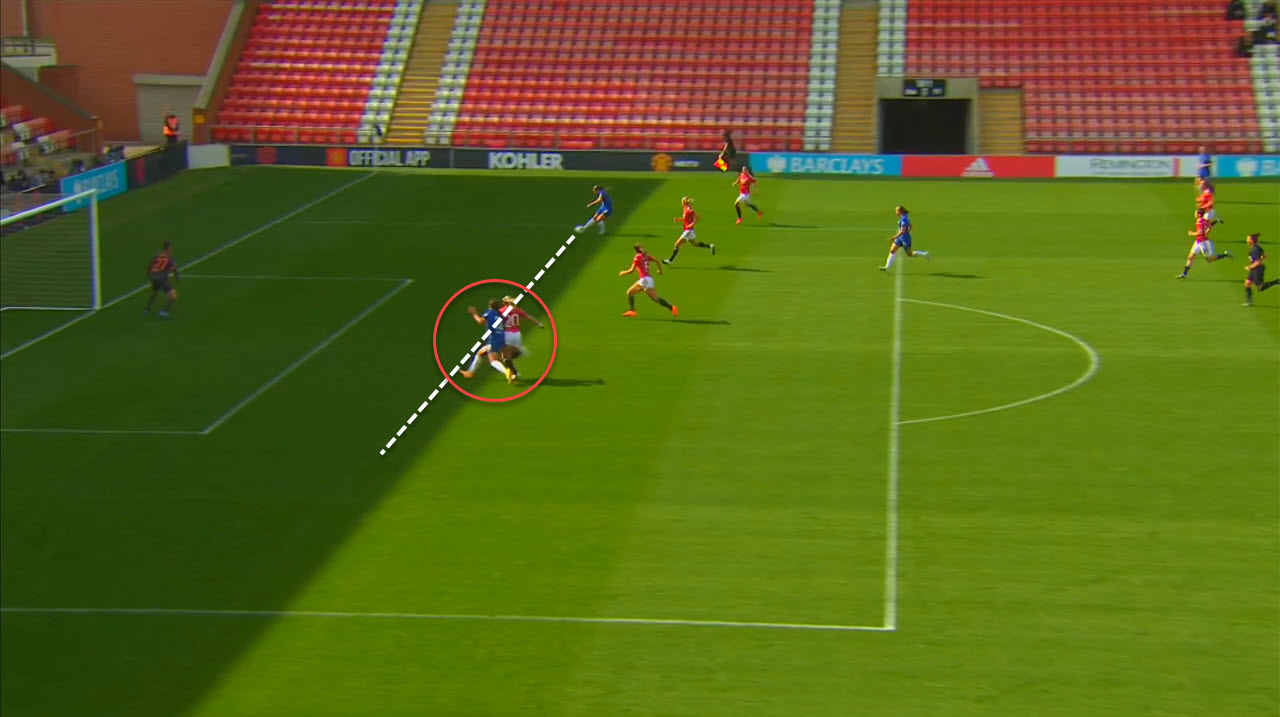 Following the goal, Manchester United continued to play in the same way, conceding more chances from Chelsea but trying to create actions mainly by relying on Katie Zelem’s passes and Kirsty Hanson and Leah Galton acceleration on the wings to make numerical superiority and get rid of Chelsea’s midfield pressing.

This was successful for Manchester United many times such as in the example in which Zelem excluded four Chelsea players from the action with one long-pass to Galton who then crossed the ball but Hanson was not able to kick it. And this confirms how Manchester United lacked only the final touch, in other words, finishing. 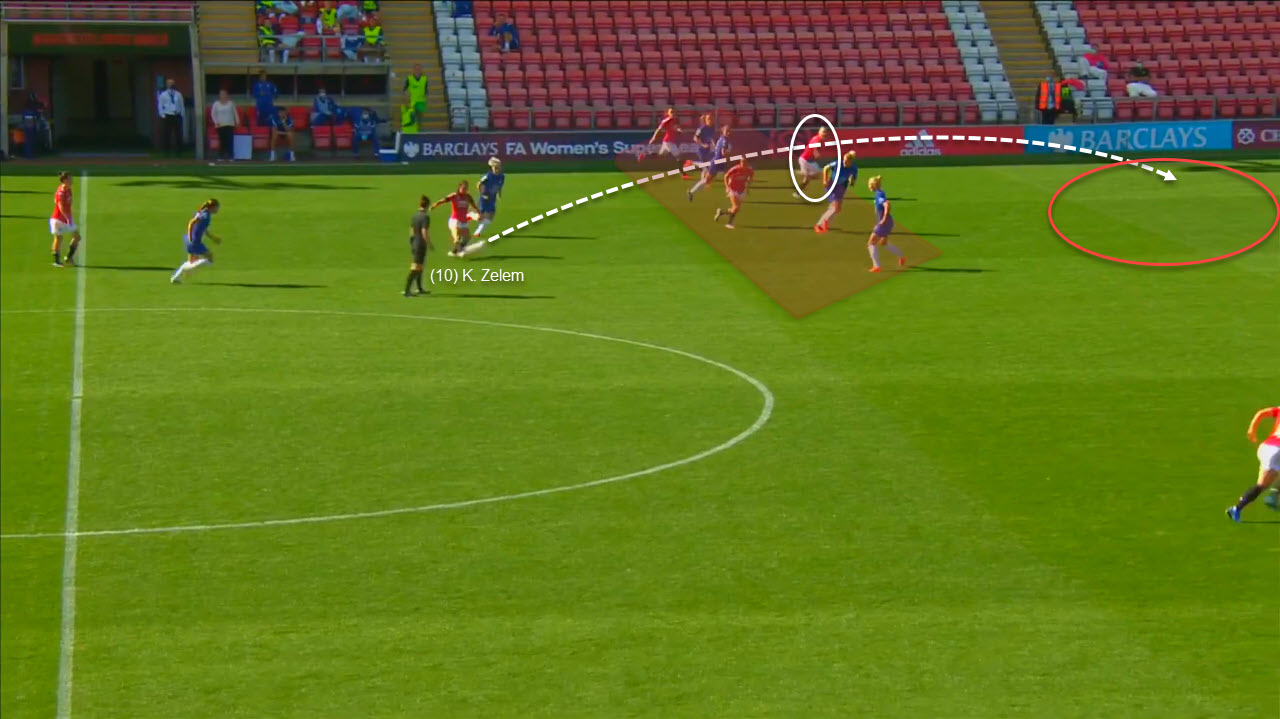 Manchester United started the second half better than they finished the first one, by keeping more possession of the ball and waiting for the right opportunity to punish Chelsea. It is worth mentioning as well that the defence remained compact throughout the game despite Chelsea’s consistent attacks and creative players.

And the credit for this goes especially to Kirsty Smith and Abbie McManus who limited the threat of Sam Kerr and stopped Bethanie England completely, preventing her from reaching the goal. Also, Mary Earps was crucial in saving several shots that could have ended the match, and this one was the most dangerous one. After this save, Manchester United started to play even better and this was like a catalyst for them. 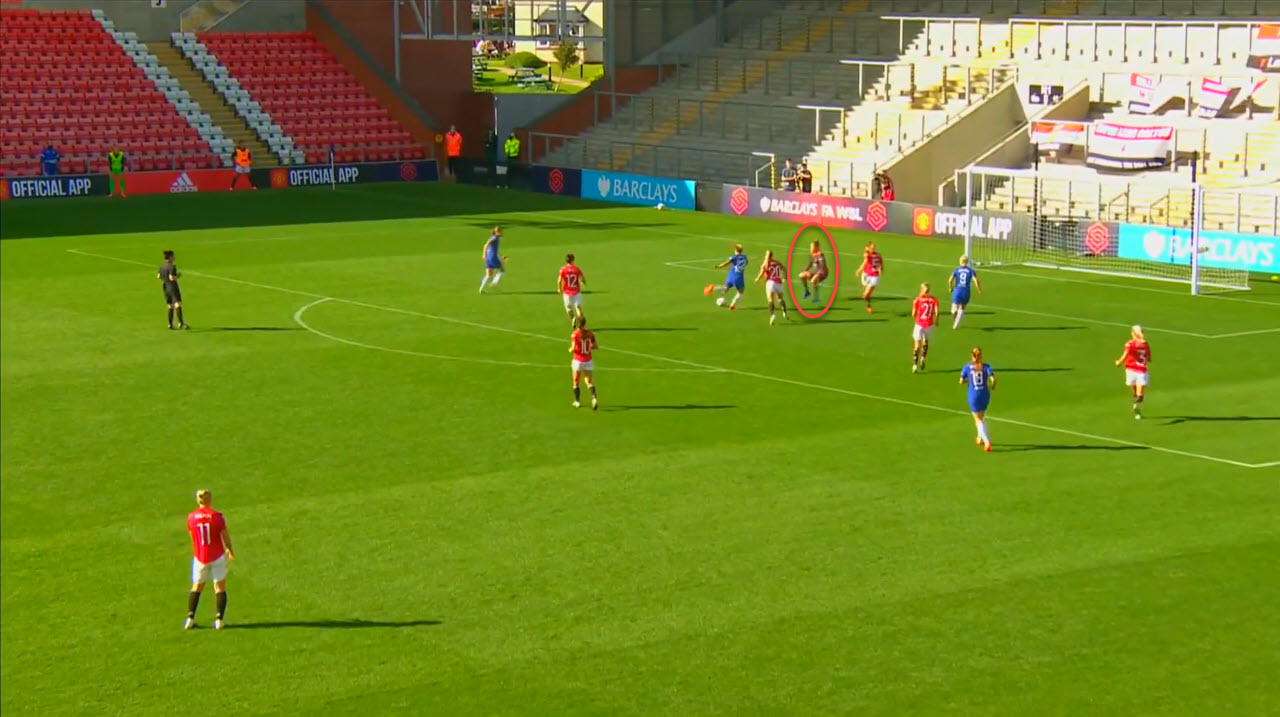 Following that save, a similar goal to Chelsea’s first goal was scored but this time for Manchester United. The source of this goal was the quick and accurate passing of the ball between Manchester United’s players who started the action from defence until it reached Ella Toone who gave a smart through ball in the free space to the substitute, Jackie Groenen, who was able to pass it to Galton who was completely free of marking and scored the equalising goal. 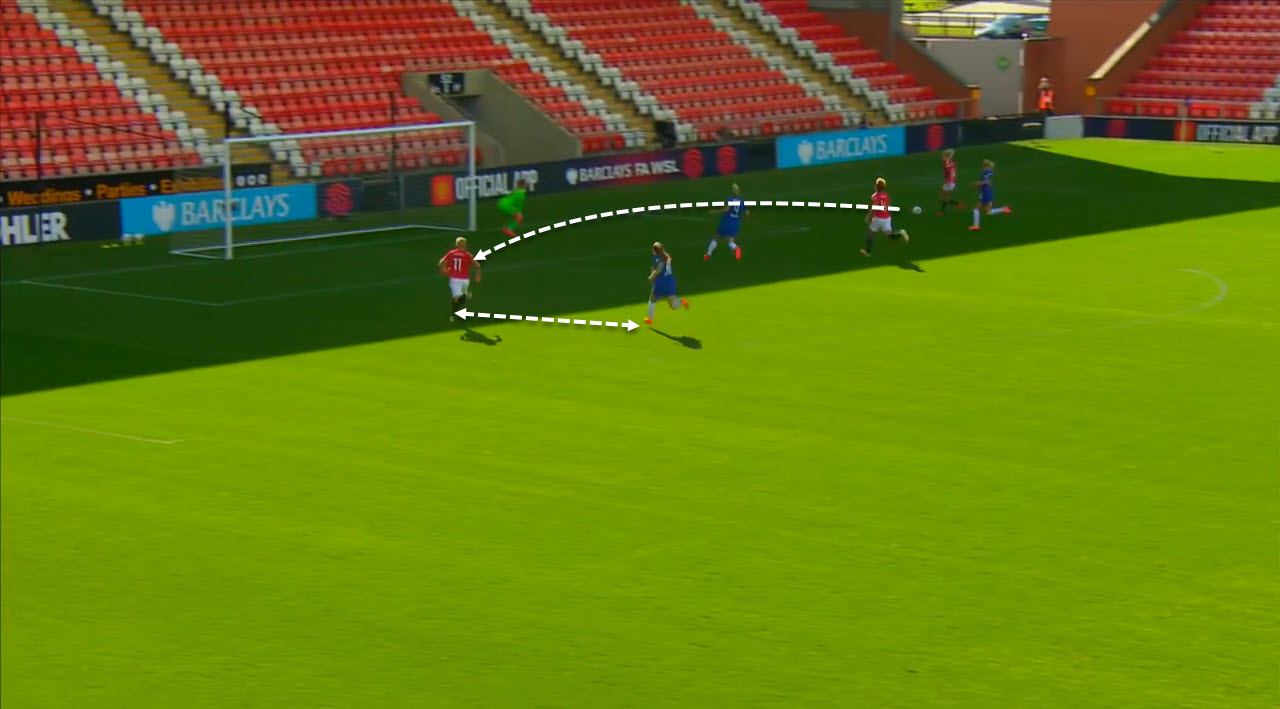 A powerful Chelsea that was poor in finishing

Chelsea found difficulties at the start of the game in playing from the back, as we mentioned above. But as soon as they were able to reach midfield, they did not have a lot of problems when circulating the ball since they relied heavily on Ji So-Yun and Melanie Leupolz to keep possession and serve the wingers, who were on their turn required to always look for Sam Kerr and feed her with passes or crosses inside the box.

Yet, this latter was not able to convert the chances that she had into goals and missed two important chances that could have made the game easier for Chelsea especially after scoring the first goal. This one, in particular, was a goal-scoring chance that could not be missed and especially shot away from the goal like Kerr did since she was very close to the goal and away from defenders. 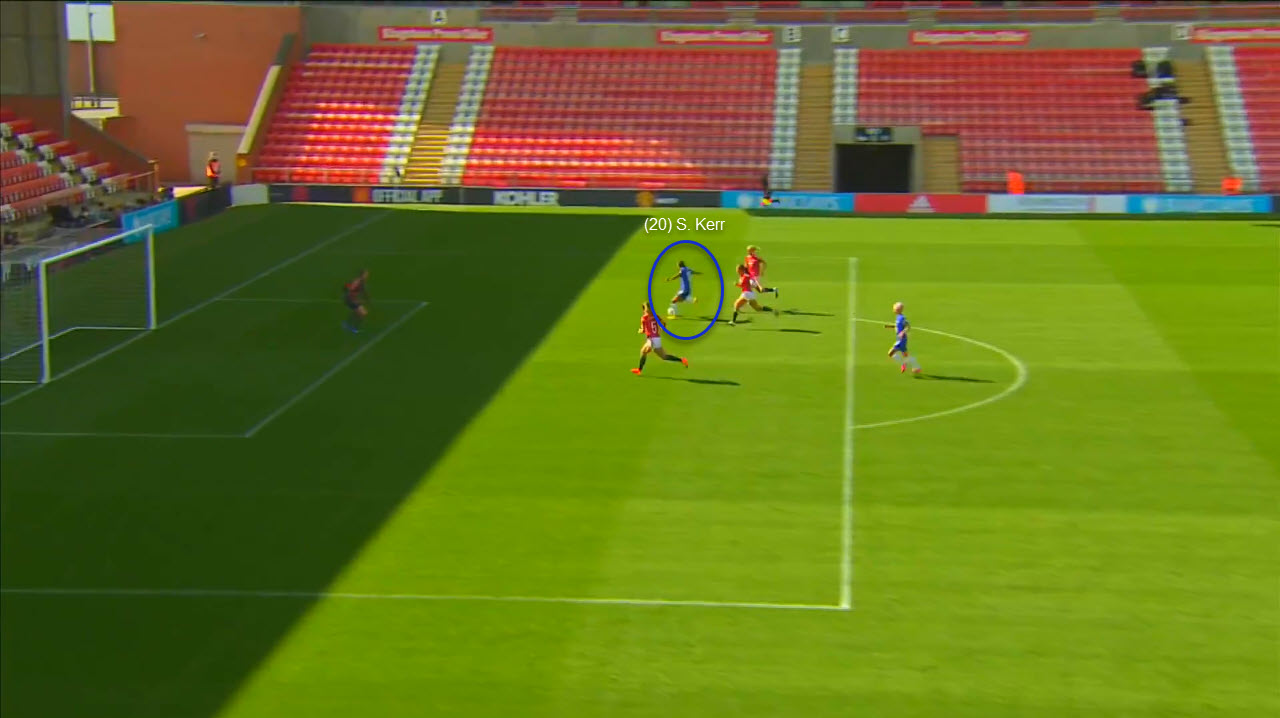 Nevertheless, and despite missing many chances, Chelsea did not lose concentration and kept pressing on Manchester United’s defence just like they were doing to them. This was successful throughout the match except for times in which Manchester United relied on individual dribbling skills or played on the wings to break down Chelsea’s pressing efforts. And you can see in this picture how even Ji So-Yun contributed in pressing high as Chelsea were preventing Manchester United from playing the ball vertically. 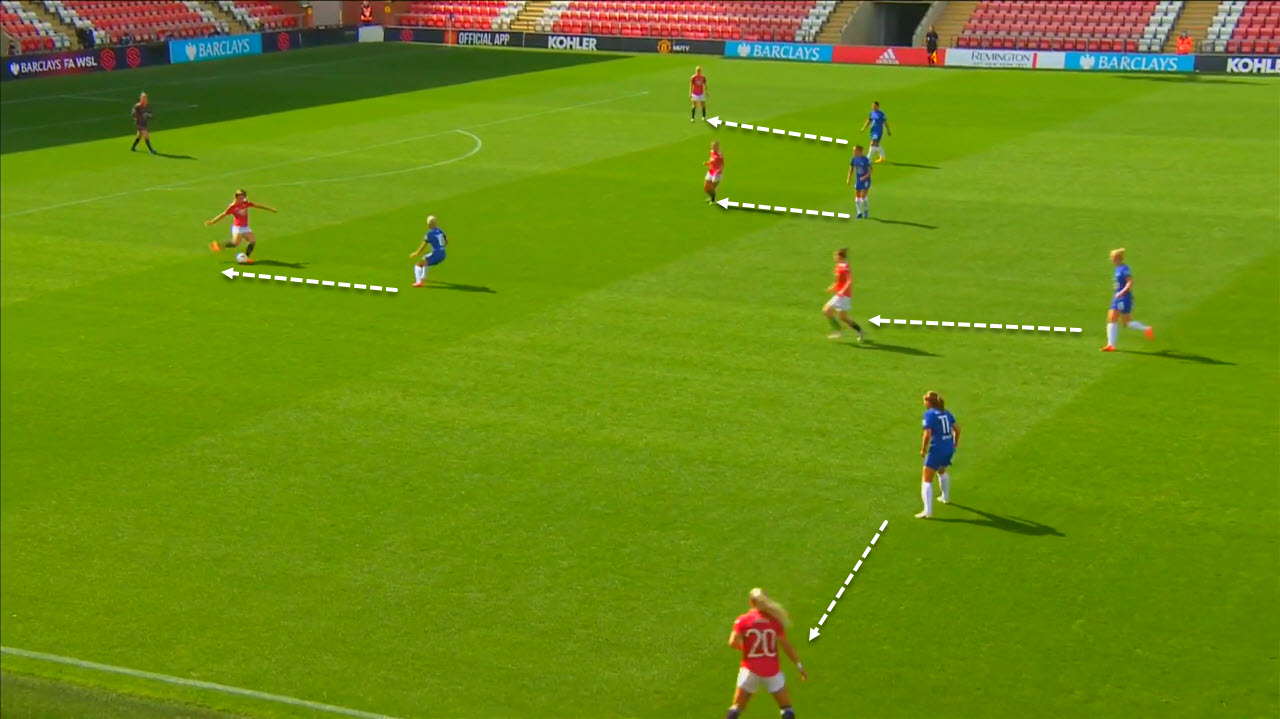 During the action that led to the goal and even later on in the game, it was Fran Kirby who created the difference by her agile acceleration, dribbling and accurate passing to Sam Kerr. Kirby not only prevented Ona Batlle, Manchester United’s left-back, from supporting the attack but also made her struggle in defence. When taking the action of the goal as an example, it is obvious how Kirby left Battle behind her while attempting to cross, obliging Turner, the centre-back, to drop to the right to try closing Kirby down but in vain. 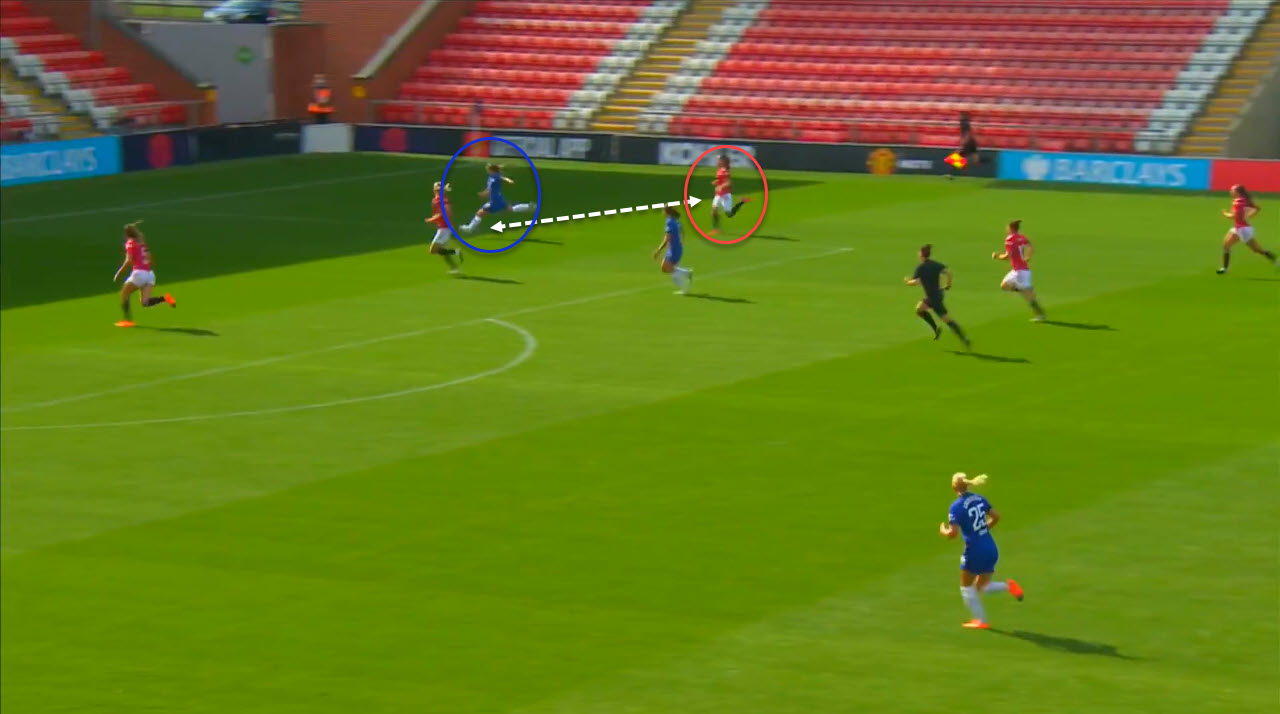 During the second-half, Chelsea were not as concentrated as in the first half, and kept missing concrete scoring chances. And this enabled Manchester United to gain more confidence and advance more often. Also, Bethany England was not able to make a difference when she was subbed on since she was tightly marked.

And Manchester United’s numerical superiority in attack disturbed Chelsea heavily since Manchester attacked with seven and eight players more often in the second half and obliged Chelsea to lose more energy in defending rather than concentrating on scoring a second goal or keeping the ball peacefully.

It is true however that Harder’s entrance added a lot of action and provided more options for Chelsea in attack, yet, she was not able to contribute in scoring a second goal for her team. But actually she was about to, since, during the last minutes, she intercepted a ball in midfield, ran with it and passed to Kirby who gave an assist to England in a perfect position, but this latter was not able to control the ball accurately and missed the chance instead of shooting at first touch. 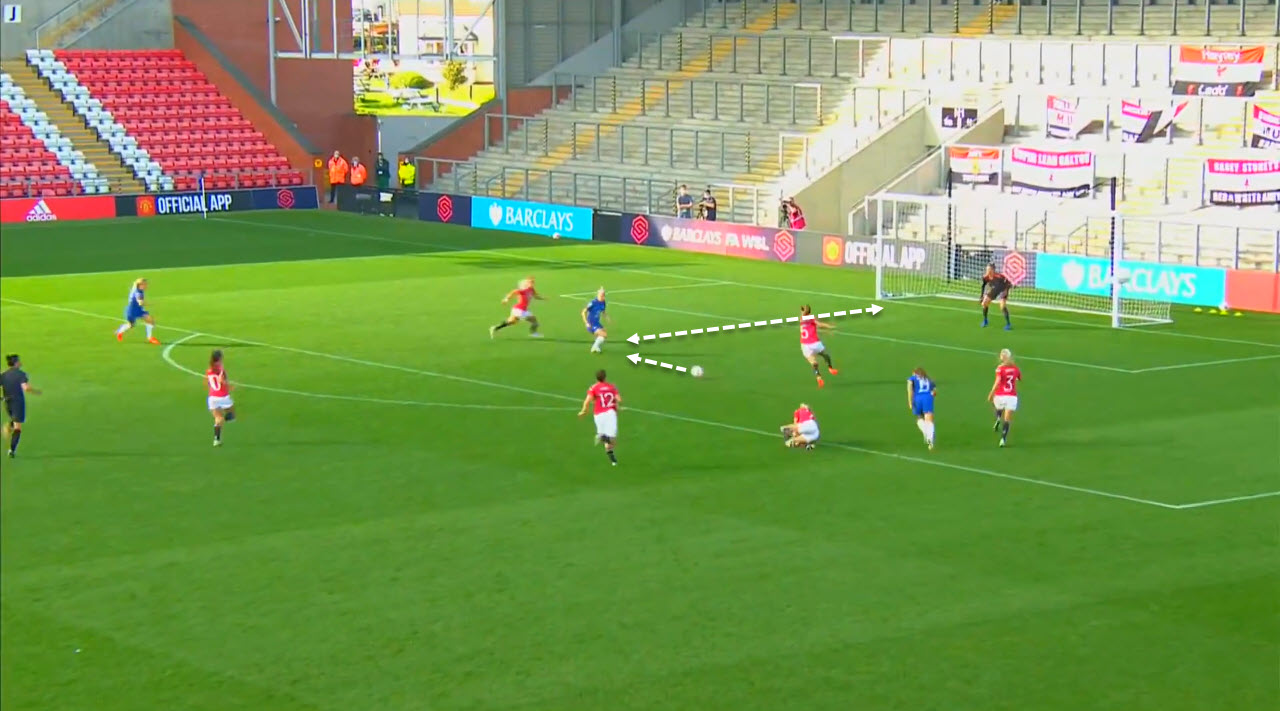 This match was full of excellent and talented players. Yet, not all of them performed at their best which is understandable given it is the first game of the season and also because we are living in abnormal conditions due to the pandemic and its effects on everything including football stadiums and players.

For Chelsea, Fran Kirby, Ji So-Yun, and both centre-backs, Millie Bright and Magdalena Eriksson were the best performs since the first two created the difference in terms of passing and pressing and the two centre-backs were concentrated for the whole match and only one goal was scored due to lack of marking from Maren Mjelde.

While for Manchester United, Katie Zelem was the one who played very well in this match, since she linked defence to midfield and at times she also provided key passes to the attack. She was concentrated throughout the game and was always present in key situations either in defence or in attack.

Another very important player for Manchester United was the goalkeeper, Mary Earps, she saved a lot of chances for her team and enabled them to stay in the game and strive for scoring. Also, Kirsty Smith and Abbie McManus were crucial in stopping Bethany England in the second half and in keeping their team behind by one goal only.

This first clash of the FAWSL 2020/2021 season gave viewers a lot of entertaining and competitive football that reassures and makes fans look forward to the next fixtures that will certainly be fun to watch.

Both teams played well and did their best to get the three points but no one was able to score the second goal. And this would give both teams more willingness and determination to win in the next games and build on their performance during this match.