Houston Dynamo has a good season so far since they fourth at MLS Western Conference. They recorded seven victories, three draws and three losses. Two out of the three defeats were ended with a 1-0. While the biggest loss was against LA Galaxy by 2-1. Thus they have not conceded many goals even if they got defeated. They only have 1.06 conceded goals per match and 1.7 scored goals per match. Now, this tactical analysis shows how they play and what issues they have.

Houston Dynamo have a fairly possession-based style as they have an average 49% possession rate. Wilmer Cabrera’s man line up in a 4-2-3-1 with a usual double pivot in the middle when they are on the ball. In attacks, they focusing on the lateral zones and often aim to get behind the opponent’s shape. Another element of their play is the counter-attacks where mostly the wingers and the striker participate in it.

In defence, the wingers fall back to the flanks thus forming a 4-4-2 shape. They acting like a man and ball-oriented defence. During the defensive phase, the attacking midfielder joins the striker and usually occupies narrow but with the task to shift over to the later zones if the opponent tries to progress there.

As a part of a proactive possession phase, the centre-backs, usually Aljaž Struna and Maynor Figueroa drive forward on the ball. Once they are able to build out from the back, the full-backs, Adam Lundqvist and DeLaGarza push up next to the sideline and occupy high. In the midfield, Matias Vera is in a more defensive role, therefore he stays deep in front of the centre-backs or drop between them.

Usually, Kevin Garcia is his partner who has a more flexible role thus he could occupy high on the left half-space.

Tomás Martínez is in the #10 space but often drop deep centrally or move to the right half-space to provide passing option there.

The wingers, Alberth Elis and Memo Rodríguez stay high and wide and seeks for an opportunity to get behind the opposition shape.

Mauro Manotas in the centre-forward position with the duty to provide some linkup play thus shift to the ball side but most evident in the counter-attacks.

As I mentioned earlier, Houston have midfield pressing and they also have two different types of high pressing. After a back pass, they move up to press that ball. In these situations, they look for forcing the opponent to wide and trap there.

Whilst they often move up high on the pitch to disrupt the opponent’s build-up. The striker usually presses the centre-backs to force the ball wide. The wingers stick to the full-backs, although they occupy in the half-space in between the opposition centre-back and full-back to gain access to both. Meanwhile, Martínez and Garcia mark the opponent’s centre-midfielders.

They even try to prevent the progression of the opponent at the goal kick situation. There was an interesting case against Dallas, they did cover all the opponents properly. 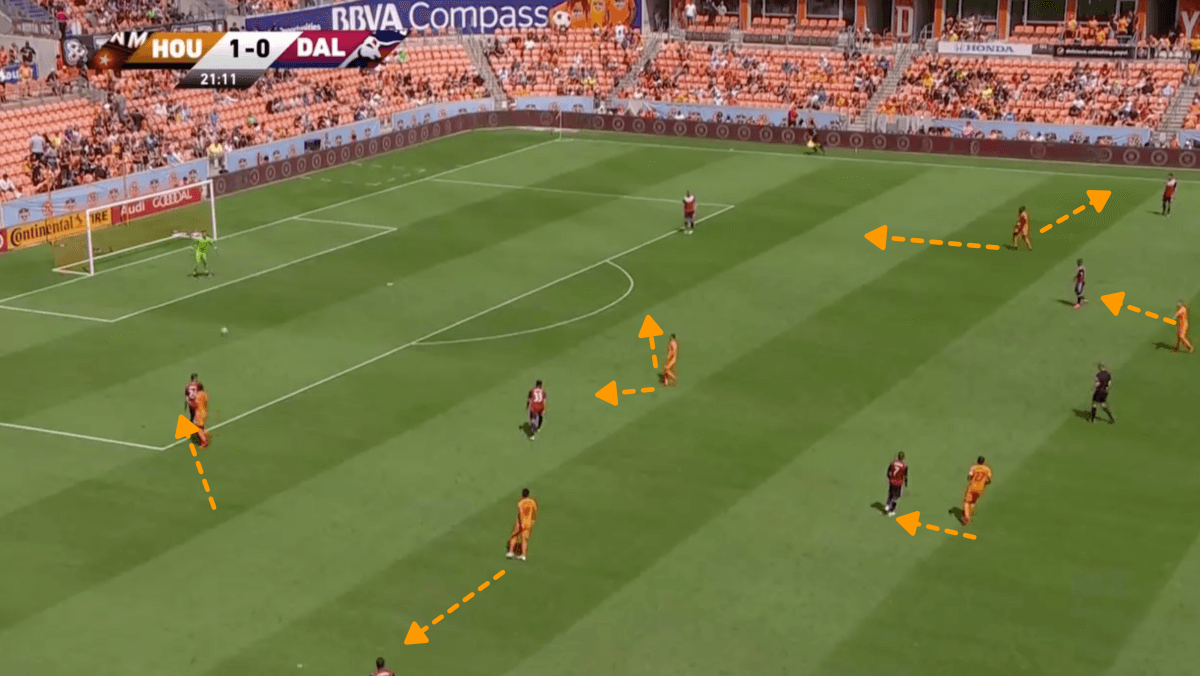 However, Dallas were able to create a 2v1 situation against Martínez. Acosta separated from his marker as he dropped a bit which made Martínez shift toward him and mark him, therefore Cerrillo became free.

Once Houston lost the ball, usually one player tries to instantly put pressure on the ball-carrier and the other teammates mark the nearby opponents.

Frequently seen an element of their play to build out from the back. They play proactively on the ball, therefore the central defenders have the licence to drive forward with the ball. To allow this movement, the defensive midfielder, Vera immediately drops to the back line when the centre-back starts to dribble forward towards the half-spaces.

Houston are focused on the lateral zones in the build-up and in attack for that matter. The other common scene is the full-back passing to the winger, but the biggest potential is in the scenario where the central defenders push forward. It reduces the space between the team departments and creates a better connection. Due to the close occupation of midfielders to the opposition second line, it could manipulate the opposition lines and there is a chance to create advantageous situations as Houston would have numerical superiority in that area with he advancing centre-back.

Having said that, there are issues in the execution which nullify the potential in that movement. In the first instance, there is a common issue. Once the centre-back pushes forward the nearby centre-midfielder start to drop to provide a passing option for the teammate on the ball. Thus the opposition winger could step out and press the ball-carrier with ease. 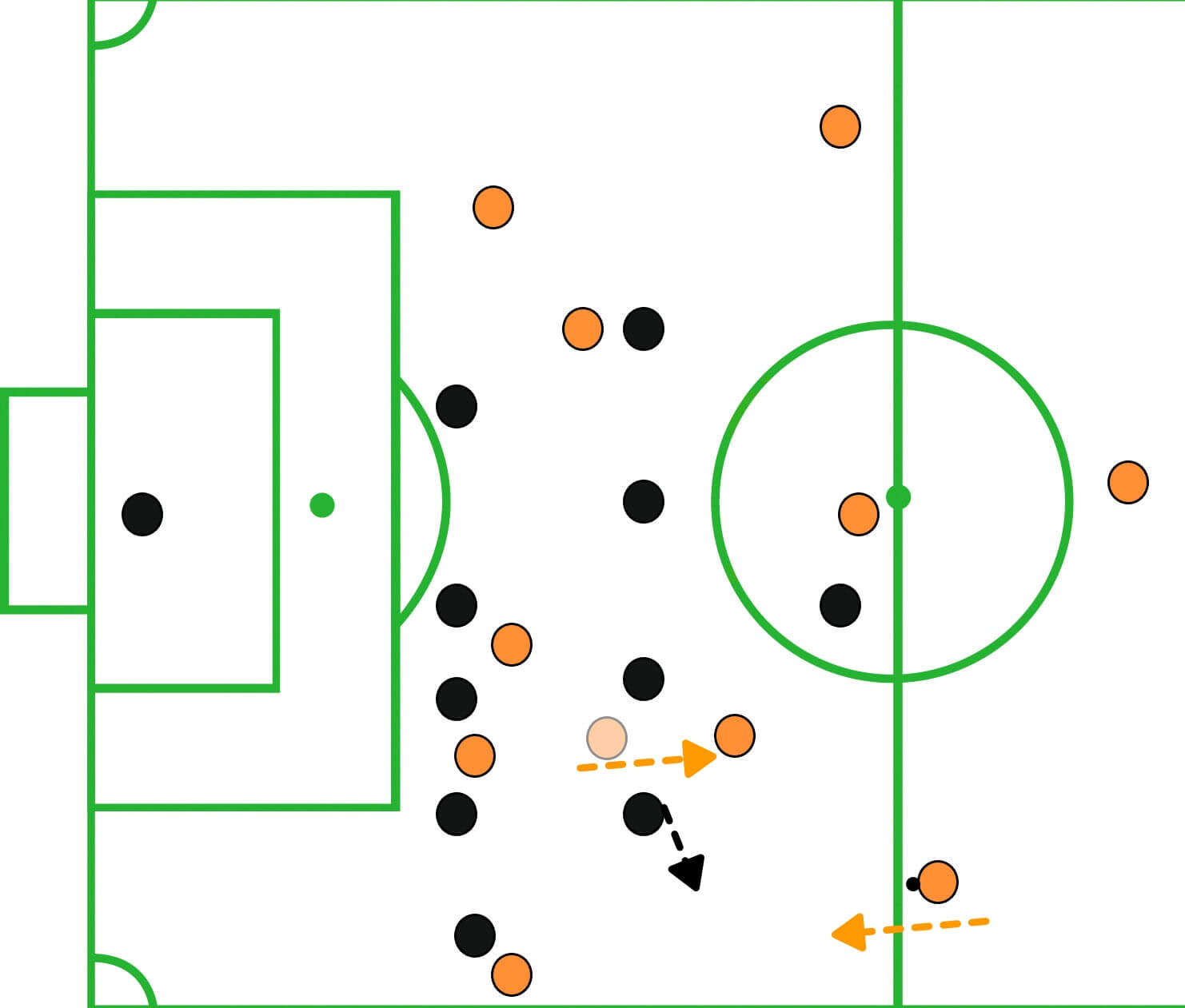 Instead of the dropping movement, for example, Garcia could stay in the opposition second line, but a bit wider in order to create a decision-making crisis for the winger. Stay and mark or push out to press.

Or on another occasion, the ball sided centre-midfielder did great as he moves out the opposition cover shadow to become free and receive a pass from the centre-back but then he failed to pass quickly enough to the full-back next thus the momentum advantage was lost. 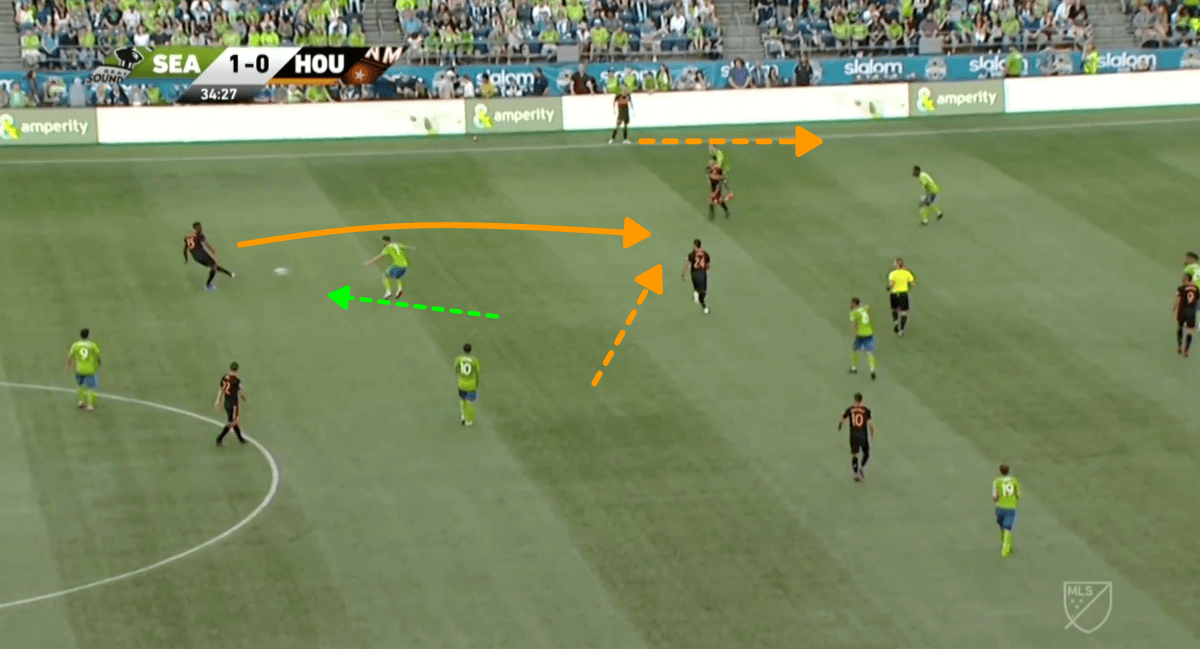 Furthermore, in the following instance, there is a good display of the principle for opposite movements as the centre-midfielder and the winger drops deep but the full-back hugging the touchline and advance up on the pitch. 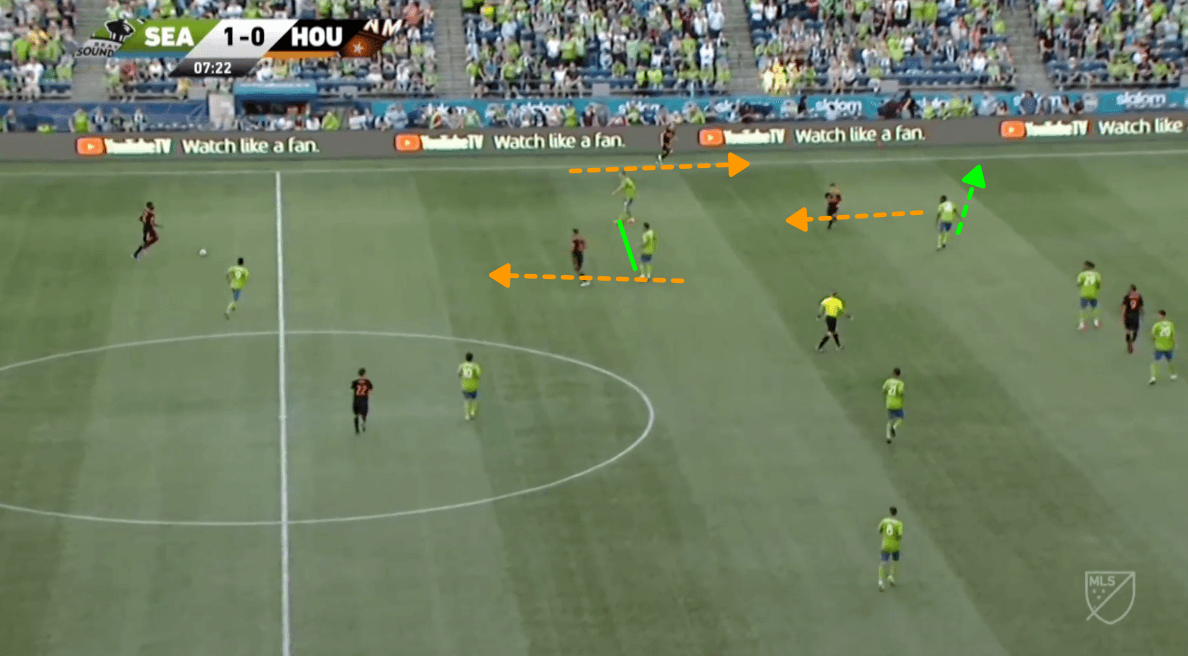 What more interesting about this situation is the fact that Darwin Cerén’s movement made the opposition winger and centre-midfielder narrower in order to block the passing lane. This made Rodriguez’s movement ineffective although it had the potential to drag the full-back out of position which would allow more space for Houston’s full-back. Nevertheless, Seattle’s full-back stayed in position. It might be better if the winger stayed up and occupied Seattle’s winger, therefore, it would create the 2v1 situation.

During the attacking phase, Dynamo targeting the flanks and space behind the opposition defence, therefore they often play long balls towards the wingers.

Moreover, they also use underlap runs by the full-backs or sometimes triangles in the wings, but most importantly, often change the point of view of the attacks with a switch of play in order to utilise the space in the far side.

If they go the chance to counter the opponent they use the striker as a target man to link up play to the far side.

Houston Dynamo showed some interesting elements in their play but generally, they often lack the quality to execute the strategy, mostly in ball controlling and decision making. It is a common scene in their matches that they capable of break the opposition defence, somehow failed to score though.

As I stated, in the beginning, they have a good MLS season so far but it will be exciting how far they could go. Also, will they able to improve in some areas in the course of the season.