In last weekend’s MLS fixture, Columbus Crew visited Houston Dynamo. The guests started this MLS season quite well recording four victories, one draw against New York Red Bulls and one loss against Philadelphia Union. However, they lost the last three games, only managing to score one goal while conceding five. Thus Columbus arrived at this battle with the goal to break the loose streak against Dynamo.

On the other hand, Houston Dynamo after dropping out from CONCACAF Champions League, they won the first three games in MLS, although before this match they needed to bounce back to the winning path after suffering the first defeat in the season against LA Galaxy in the previous round. Let’s check how to bet on the MLS for this match.

The battle of these two teams turned out to be an easy 2-0 victory for Houston Dynamo. Interestingly, both goals came from a counter-attacking situation. The first one was a bit lucky as Manotas touched the ball to the net, but the second goal was a big individual moment when Tomás Martínez scored from a distance shot at an end of a counter-attack. Thus there are interesting aspects of the game that this tactical analysis will reveal.

The home side used the usual 4-2-3-1 system with Maynor Figueroa and Aljaž Struna as centre-backs and DeLaGarza at right-back, while Adam Lundqvist defended on the left side. In the build-up, they often got supported by Martínez who dropped deep for balls. Kevin Garcia and Matias Vera formed the double pivot, the latter one took the more defensive duties. Garcia had the licence to push forward thus he often found in behind the opponent’s second line.

In team selection only one change occurred compare to the previous games, Memo Rodríguez returned to the left wing instead of Tommy McNamara who started against LA Galaxy. 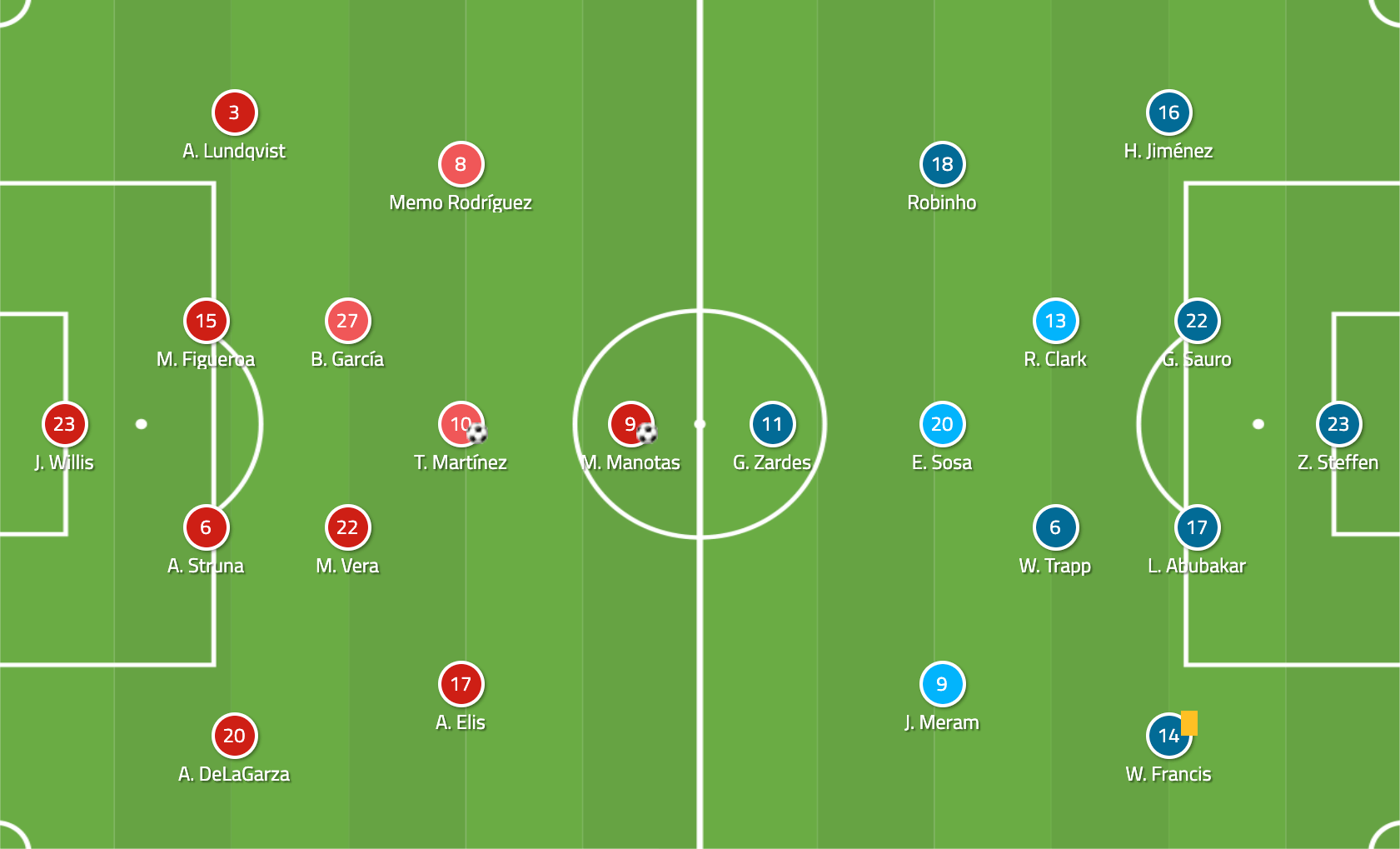 Whilst Columbus Crew’s new manager, Caleb Porter who replaced Gregg Berhalter, also deployed their usual 4-2-3-1 formation but with some changes to the starting lineup. He broke up the midfield duo of Wil Trapp and Artur and replaced Artur with Ricardo Clark. Lalas Abubakar paired up with Gastón Sauro in the centre of the defence. On the left wing, Justin Meram played instead of Pedro Santos, and also Federico Higuaín got benched, which effected Crew’s play. By the way, Eduardo Sosa got the opportunity in Higuaín’s position.

Often 4-2-3-1 formation paired with a reactive manner meant these teams usually had the ball for a lower percentage of the time. This meant they emphasised on counter-attacks to take advantage of the disorganised defence and the uncovered space to quickly play the ball to the opponent’s final third and score.

Since both sides opted for the same formation it became crucial how they employed it. Probably the biggest difference between the teams was how they used it.

When Houston were in possession, Vera dropped to the last line to help the ball circulation. As the images highlight below, he occupied in between the centre-backs which allowed the full-backs (or now wing-backs) to push forwards. While in the middle, Martínez and Garcia occupied. Martínez often dropped to offer a central option, although due to opponent’s cover they were rarely accessible.

Columbus formed a 4-4-2 shape against the ball with the aim to protect the central zones. In order to do this, Sosa moved forward to form the first line of the press with Gyasi Zardes, although they did not press, rather focused on preventing the opponent’s middle progression. They stayed close to each other to block the passing lanes towards Martínez and Garcia, thus Houston were able to circulate the ball in between the last line without a hindrance but they lacked penetration.

All the passing options were covered and the last line circulation did not force the guests to move their shape, therefore, the home side struggled to build from the back. In those occasions when Houston were able to move forward and create a longer passing phase, they formed a 3-4-3-ish shape with DeLaGarza and Lundqvist giving width to the team. This allowed the wingers to occupy narrow.

The away team acted differently when they were in possession, although they also tried to create quick counter-attacks in order to utilise Zardes abilities. Without Higuaín, there was no player on the pitch who was capable of keeping the ball and creating opportunities for Zardes, thus he did not get enough support. This made their counter-attacks ineffective.

Furthermore, there were other differences in Columbus’ play. In possession, they often tried to overload the ball near area, usually, the wings created a combination between the players to bypass the opponent’s defence.

This of course, pulled the opponent’s team towards the wing which opened up space on the far side. Although the guests played the ball to the far side towards the right full-back and utilised the space, it was not a conscious play.

Quick goals decided in both halves

Columbus were able to hold a considerable amount of possession throughout the first half in spite of the fact that they were the away side. Although they took a more proactive manner compared to Houston, right from the beginning. To be honest, the early lead had probably a big effect on Dynamo’s play as they did not need to attack with that much energy thus they could emphasis on stable defence.

Moreover, Columbus lacked quality goal-scoring chances which is evident in their stats too as they only managed to create a 1.09 xG.

On the other hand, Houston created a 2.09 xG which they efficiently took advantage of and scored two goals. However, in the game that was not as evident as the stats shows. The home side was able to control the game through the stable defence and also had some promising situations from counter-attacks. They frequently stole the ball from Columbus and initiated a counter, but overall, there were not that many quality goal-scoring chances.

After the break, Columbus’ defence held up a bit longer and it took 10 minutes for Dynamo to score again which occurred in the wrong time from the guests’ perspective as it did in the first half.

The home side kept their average 2.1 goals per match ratio and got back to the right path. If Cabrera’s men continue this good start, this could be a good season for them. Meanwhile the guests, Columbus Crew showed some struggles with the coach. One solution to their attacking problem that arose is to use the overloading one side and penetrating the far side tool more often and more consciously.