Coaching: The usage of different pitch shapes in football training

In football coaching, many variables can provoke certain solutions and therewith impact the training effect. Besides the number of players, the pitch size and other rules, coaches can use different pitch shapes to indirectly affect the player behaviour.

This training analysis depicts different pitch shapes and their influence on the decision-making and the utilised tactics of the team.

Obviously, there are endless options of adjusting the shape. However, we will take a closer look at the most common ones which have already been proven to be useful in football practice.

The most popular alternative shape to the square is the diamond. Instead of having straight sidelines, the sidelines are diagonal. 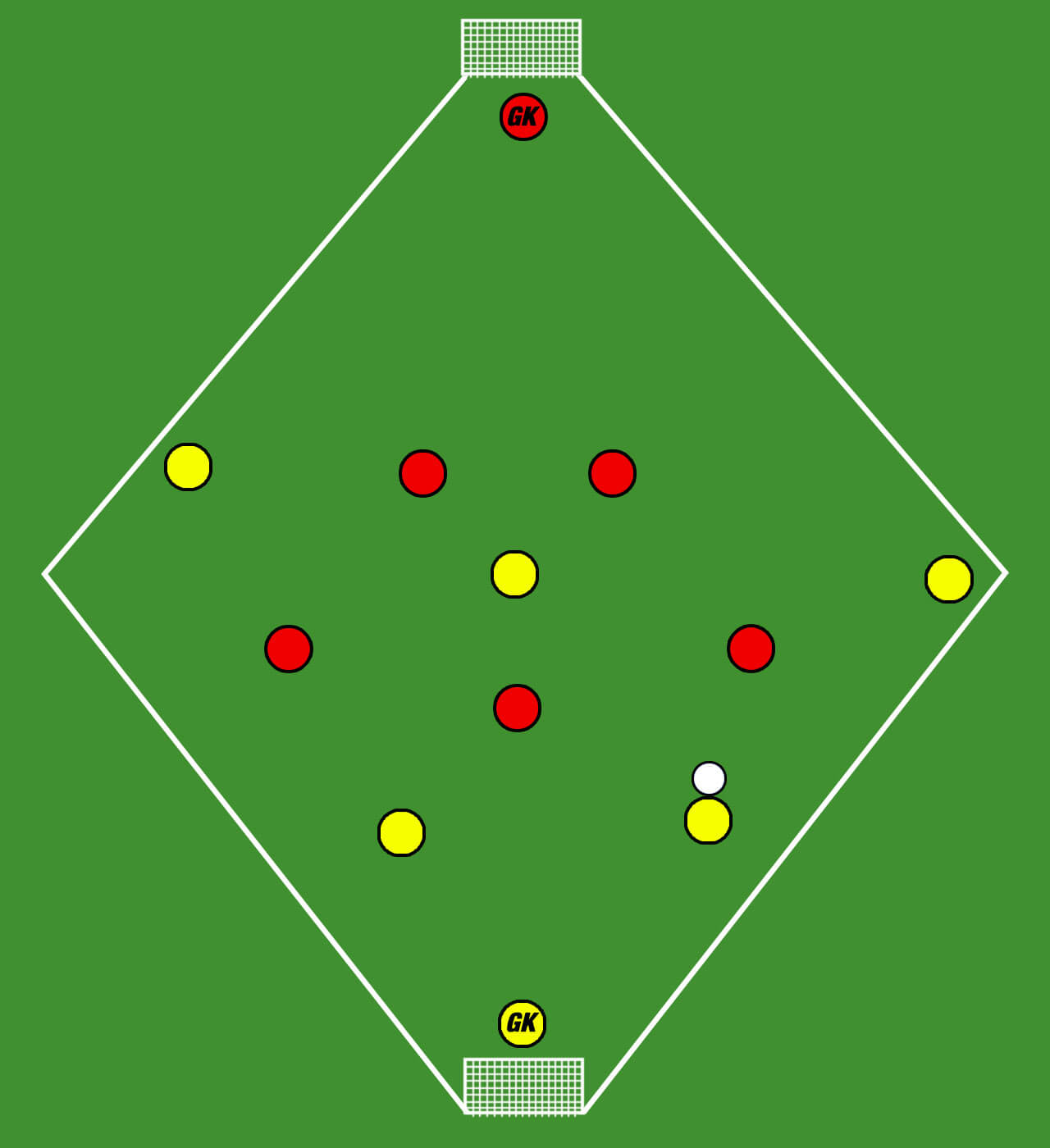 That does not only make the pitch more narrow but also forces both defence and attack to focus on the goal near areas. Instead of putting in crosses, the attacking team will have to use more through passes in central areas. Therefore, this shape can be perfectly used when trying to implement a centrally focused attacking phase and the basics of through passes such as diagonal pass into a straight run or straight pass into a diagonal run.

But the teams will also learn to sustain possession by providing width in the middle third in order to prepare a penetration in the final third of the pitch. Due to the narrow area near to the goal, the defenders need to find rather direct ways of playing into midfield. As this also disables simple square passes from the centre-backs to the wide defenders, the diamond shape will enforce the central defenders to play diagonal passes into midfield. This might increase their vision and confidence in playing out from the back.

The pressing side, on the other hand, will need to shut down the centre of the pitch. Therefore, the pressing player always needs to be covered diagonally to prevent any passes into the middle third – the area with the most space.

Another possible way of adjusting the shape is to set up a pitch in the form of an hourglass. Opposite to the diamond, the hourglass offers only a few spaces in the middle third and a wider shape in goal near areas. 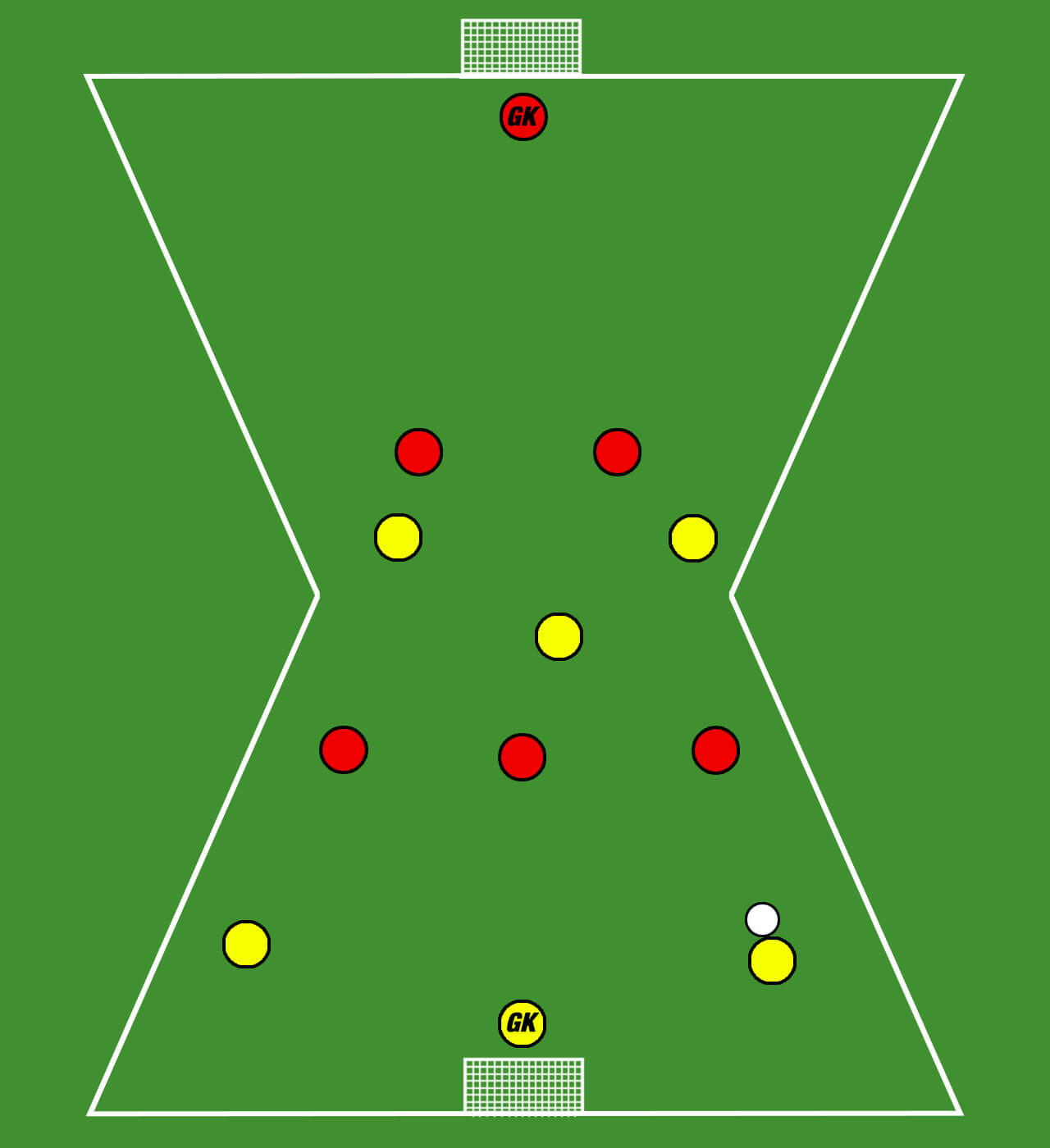 The narrow area in the middle of the pitch disables either side to progress up the pitch on the wings. Instead, when playing out, both teams have to find a way to play through the centre. Moreover, the build-up players are forced to play diagonal passes into central areas. Diagonal passes are advantageous as they overplay vertical and horizontal lines and are therewith more difficult to defend.

Without possession, the teams can either force the opposition to play into the centre in order to press in a comparable small space or trigger the opposition build-up into the wide corners since they only offer few passing lanes with less than 90 degrees. No matter what, if being overplayed the backward movement of attacking players is vital in this shape. As the own third offers more space again, the defenders need the support of the offensive players to prevent the opposition from scoring.

An advanced version of the diamond pitch is the octagon-shaped pitch. 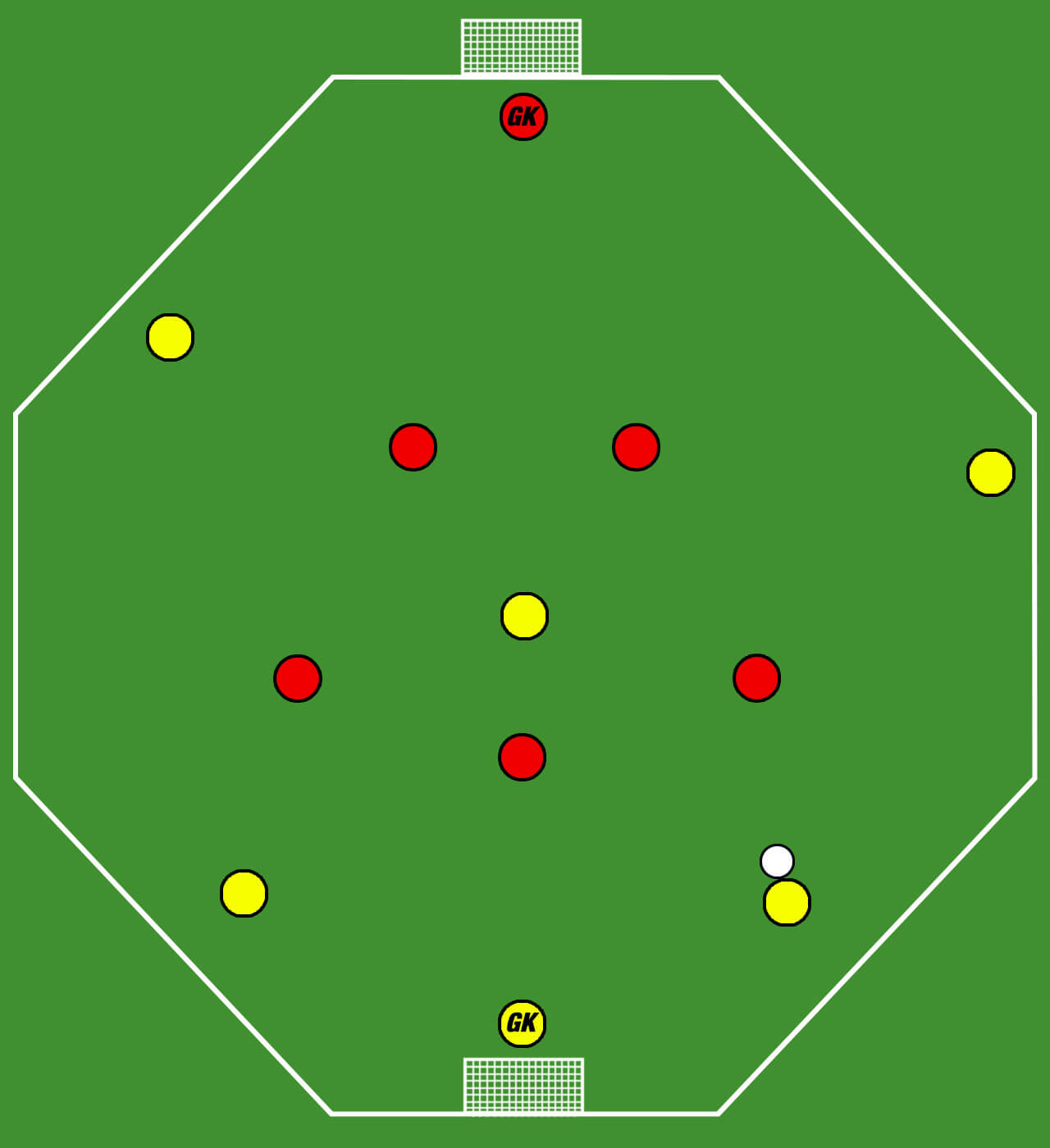 With eight corners in total, the octagon is an advanced version of a simple square or a diamond yet still more cornered than a circle. Different to a square, the octagon also entails diagonal lines which force players to play rather diagonally instead of long line balls.

Similar to the diamond shape, the middle third offers the most space. As a difference though, the wide players are allowed to move along a vertical part of the sideline in the middle third. As a result, the wide players have to decide whether to use the whole width of the pitch or to start their diagonal runs into the final third before reaching the corner of the sideline.

In order to avoid the existence of any corners, coaches can also use circles. 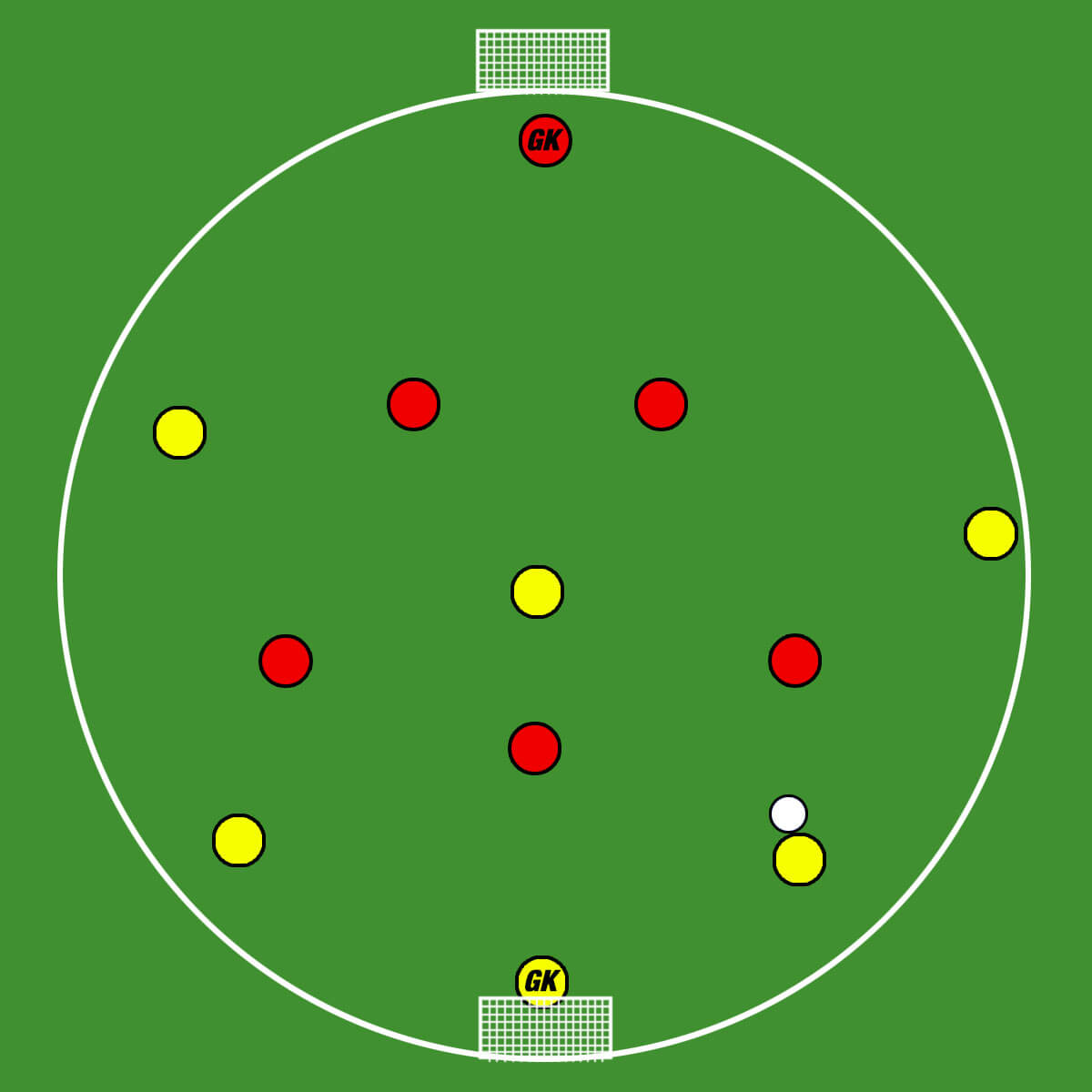 The circle shape comes along with many tactical advantages. Firstly, wide players are not as much restricted in their passing lanes as on a squared pitch. That also means that players cannot hide in corners in order to „escape“ from complex situations. Corners only provide an angle of 90 degrees and therewith fewer options and less complex situations. In a circle, however, every wide area offers more than 90 degrees. But the circle shape still eliminates the option to play long line passes and forces the play towards the goals. Therewith, goal-oriented attacking is still ensured.

When pressing, tactical individual behaviour such as arc-like runs are needed to force the opponent into one direction. Again, goal near areas are more narrow and lead to tighter marking of opposition attackers automatically.

The circle shape is especially useful to practice sustaining possession (in non-directional games) as the sidelines do not differ in any area of the pitch. Moreover, the circle shape prevents any longer passes during wide circulation of the ball. As a result, constant play through central areas are required.

Another interesting shape is the “Z-shape”. 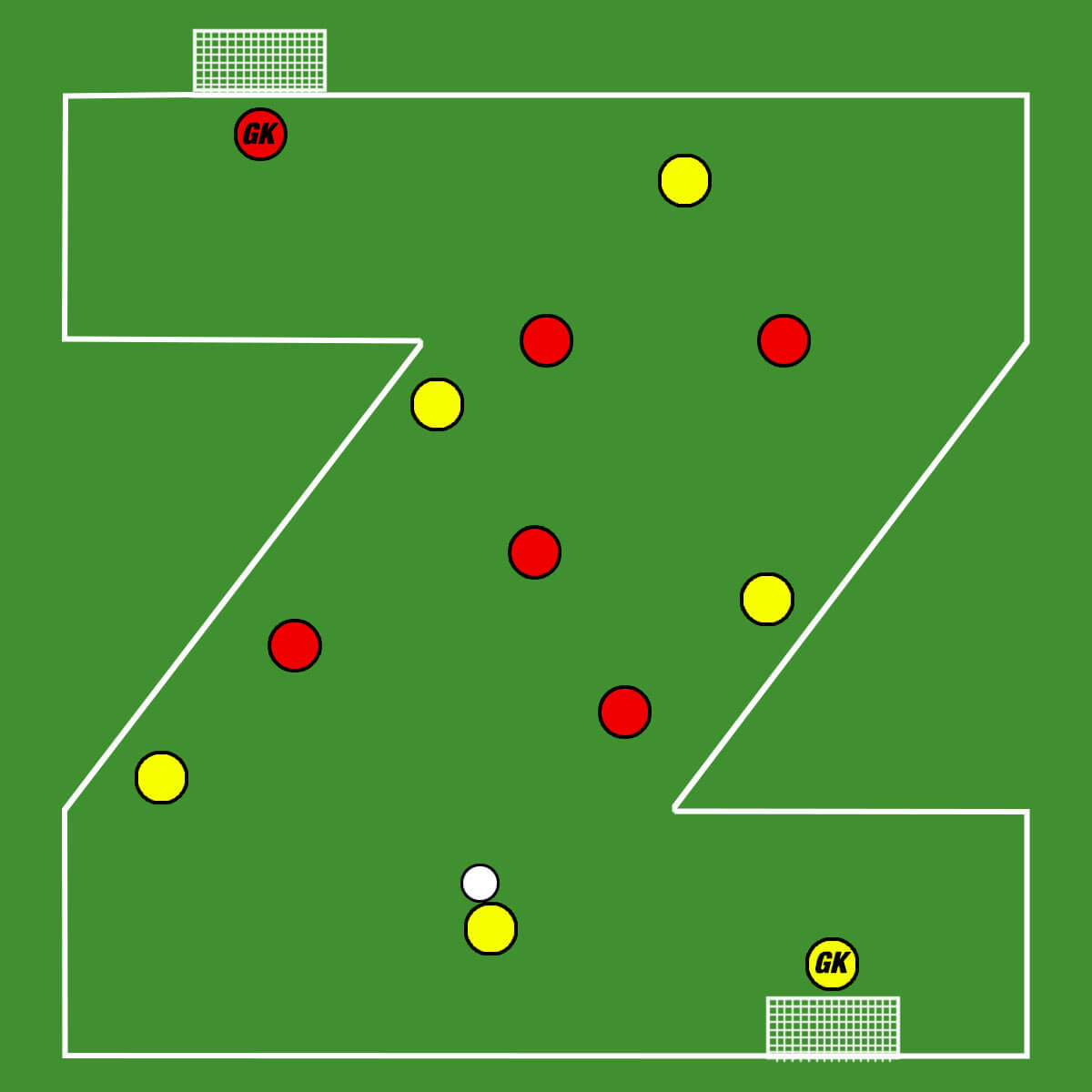 This shape restricts the options and forces the possession to play diagonally from the left to the right or the other way around. In addition to that, it enforces the creation of chances from wide areas.

Using this shape, one can also allow all players to move outside of the pitch without the ball. This will improve off-ball movement and the ability to distract opposition defenders. Furthermore, it facilitates rotational movements between areas on and off the pitch.

Since both teams build up from the same side and attack down the other side, it is sensible to mirror the shape after half of the game time played. During practice, it will probably lead to players who normally play on the right side playing on the left side and the other way around. That is not a disadvantage at all though since this process of rethinking improves cognitive abilities.

One should never forget about the coexistence of other variables. Whether a drill is directional or non-directional as well as the goal positioning for example also affect the decision-making of players.

When keeping this in mind, these variables pose huge potential for all coaches to adjust drills to their specific style of play. If some variables are not well adjusted though, those can interfere with the effect of variables such as the pitch shape.

All in all, with the simple adjustment of pitch shapes, coaches can lay the platform to coaching certain player behaviour. If one uses the shapes in the right context, players will be more likely to understand the tactics and the coach can reduce the explanation and force his players into finding their own solutions.

That being said, different pitch shapes in training sessions are a great tool to keep the players tactically versatile and to teach certain principles.