This session will create opportunities for players to work on attacking transition principles. We will look to encourage them to initially seek to break lines and play forward into players who have support, however, also encouraging them to recognise when this isn’t possible, and instead having them retain possession and stretch the pitch both horizontally and vertically.

This tactical analysis will provide examples for coaching attacking transition principles, giving examples of three practices and an analysis of how these practices should be run and what coaching points can be brought out of them. These practices are transferable to a wide range of tactics for it looks to bring out learning for basic principles in this moment.

The first part of this session will look to allow players to experience a high volume of turnovers and experiment with different approaches, whether through dribbles, immediate passes forward, or using a third player to create opportunities to be successful in playing forward.

Quite simply, the aim of this game is for the possession team to work the ball from one end to the other. It works well for rotations if there can be three sets of pairs with the two pairs in the middle playing against one another whilst the player on either end acts as the target players/neutrals. After a number of sets or set amount of time the pairs can rotate giving a new match up in the middle and different end players.

The practice should start with the ball being played into the attacking team by one of the end players. 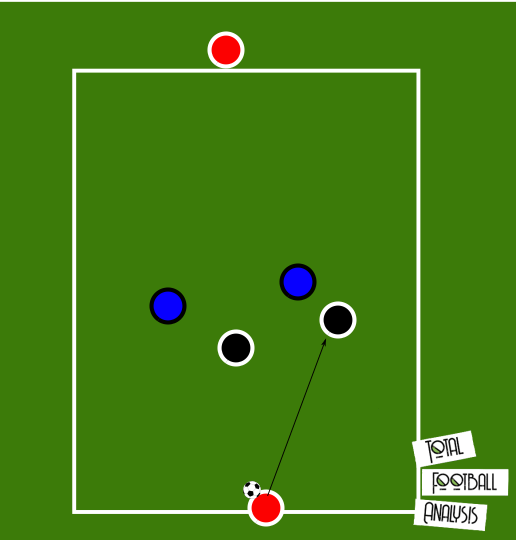 The attacking team should be prevented from using a third player to allow them to play through, with the third player only coming live once the ball has been turned over. Until that point this plays out as a 2v2. It is this moment the two can look to combine to play past the defenders, or of course the player in possession can look to dribble past the player. Any passes into the player on the far end result in a goal. 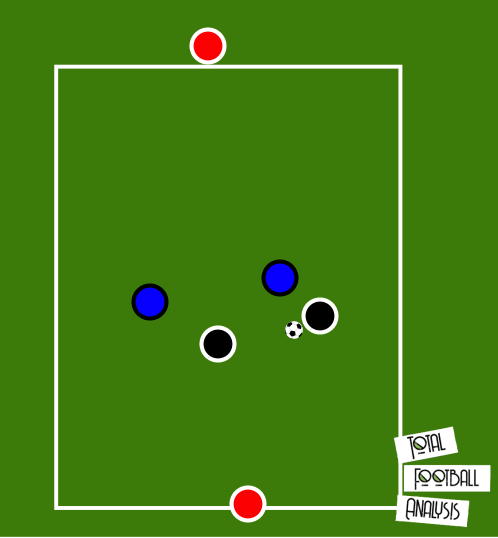 However, once a turnover is forced, the blue team in this example can now attack. If they are able to score within five seconds of winning possession their goal is worth two, promoting them to look to break lines as early as possible, whilst we also want to encourage our players to play passes at a quick tempo and play off of limited touches where possible. The blue team can play straight into the player on the opposite end, however, should the black team counter-press effectively and prevent them from finding this option, they have the chance to use the closest end player to make a 3v2. These end players in such instances should be put on a touch limit to keep the situation as game realistic and the tempo intense.

This player can simply recycle possession, but has the option to break lines as well with a forward pass. 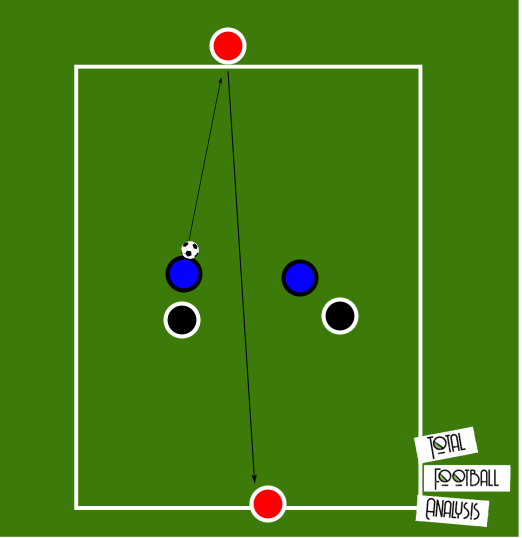 Once the ball is played successfully to the opposite end, the blue team swap with the black team and become the attacking team. 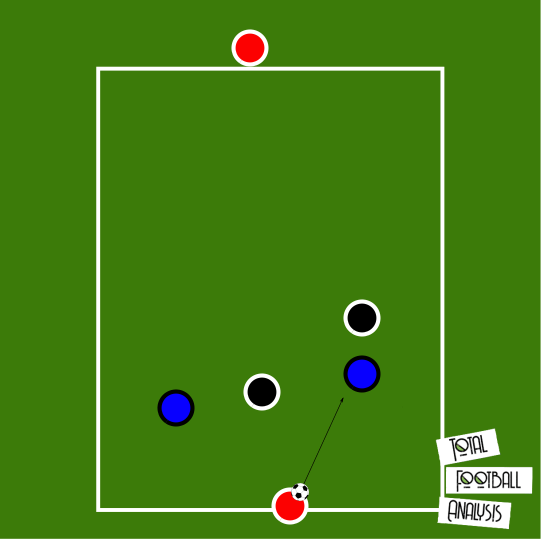 This practice is intense and continuous so players should work in shorter sets to ensure this match level intensity is there.

The 3v1 is ideal because it force the red team to move after playing a pass and increases the likelihood of a quick turnover. Once the blue player in the middle wins possession they are tasked with quickly finding a pass to a teammate on the outside. The red team can move freely to counter-press, and the central blue player can also move freely but should be encouraged to stay centrally where possible. 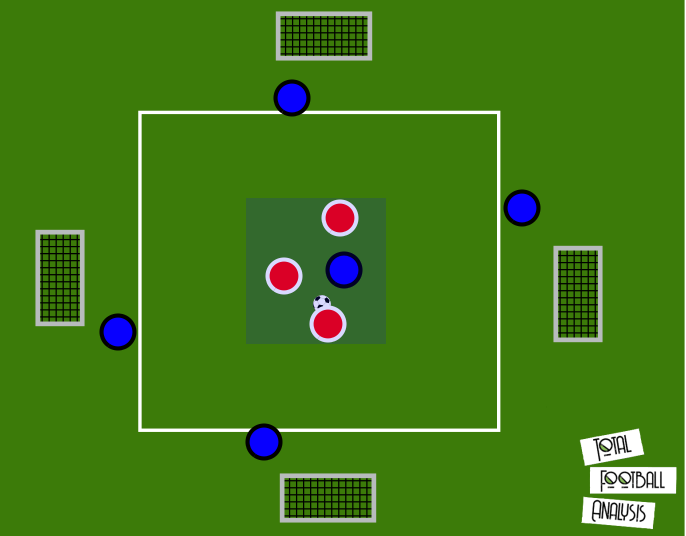 The blue team are tasked with finding 10 passes for a goal, however, if they are able to split the red defending team, representing an early line-breaking pass in the moment of attacking transition, this can immediately be rewarded as a goal. 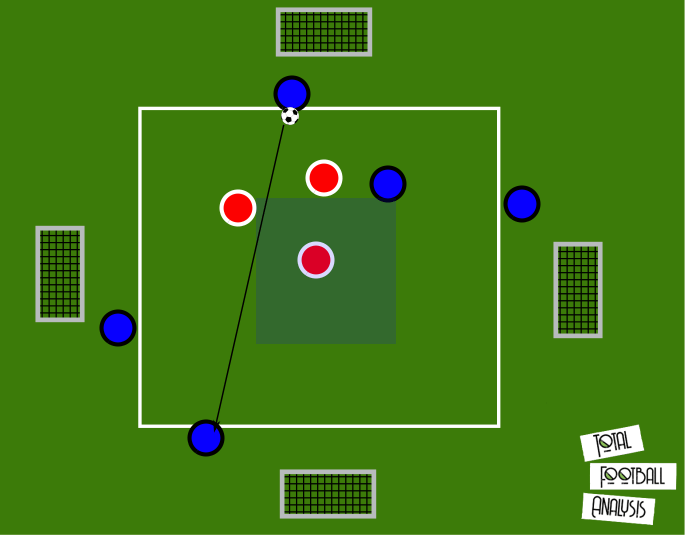 Once they reach either 10 passes, or make this split pass, whichever comes first, they are allowed to finish in one of the small goals for an extra point. Rather than an outside player receiving and finishing on the turn the blue team should be encouraged to finish facing forwards, making it more game realistic, and prompting them to set their central player to finish. 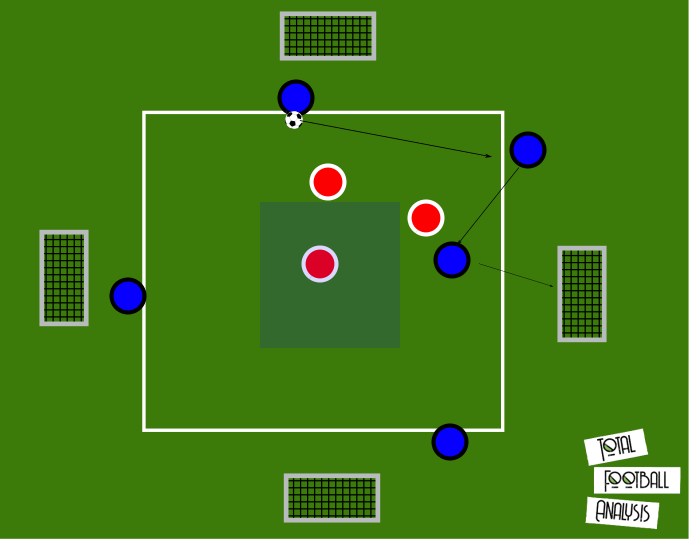 This represents a quick combination in attacking transition and player movement to find space and support forward passes, allowing us to continue playing forward in this moment.

Once more we are encouraging our possession team in this attacking transition moment to play with pace, off of limited touches, and to understand the benefit of breaking a line in this moment. When that line-breaking pass is played we need to ensure the player now in possession isn’t isolated and that there is support.

For example, in the following image, let’s say the player in possession has just received the ball through the centre of the pitch. There is immediately support close to him, and at least on one wing (although preferably on both wings), whilst the player on the opposite end who has just played the pass should be looking to move across their line and offer a pass option once more, continuously moving the opposition defence around. 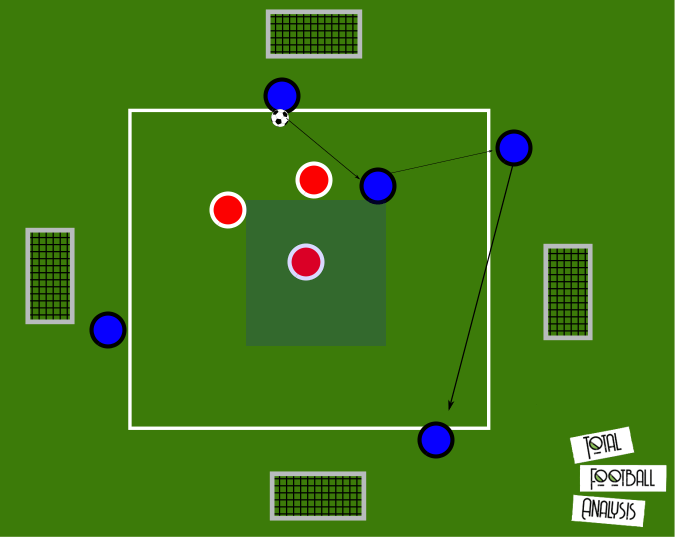 If the red team is able to force an interception when counter-pressing, they are able to score themselves in one of the mini goals. If they force the turnover and score within six seconds this goal can be worth double. 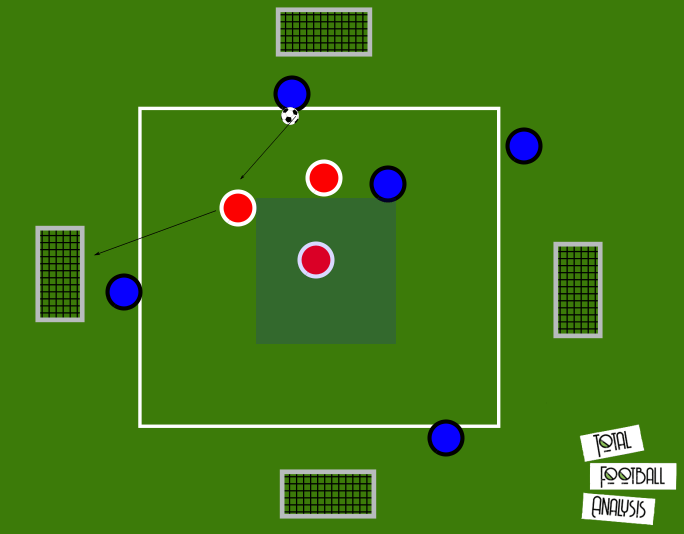 However, the blue team should also be encouraged to counter-press and players can step in from the outside to provide pressure on the ball once it has been overturned. 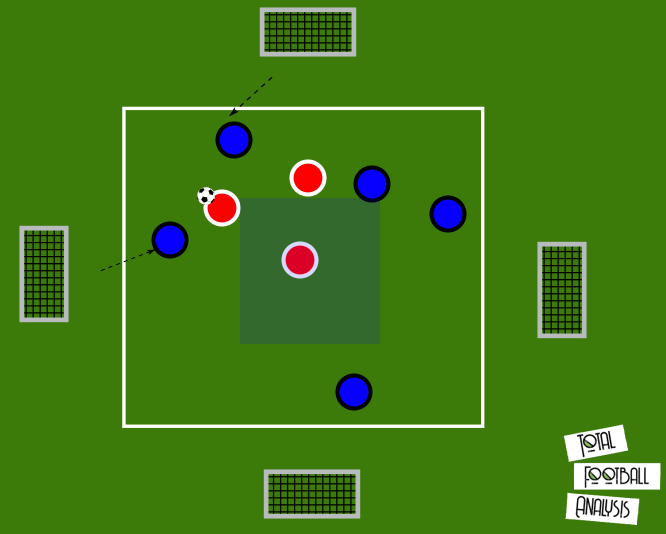 We can get them to understand the importance of immediately transitioning once more after winning the ball again, with the players shifting quickly back to the outside if they regain possession to provide space and pass options. 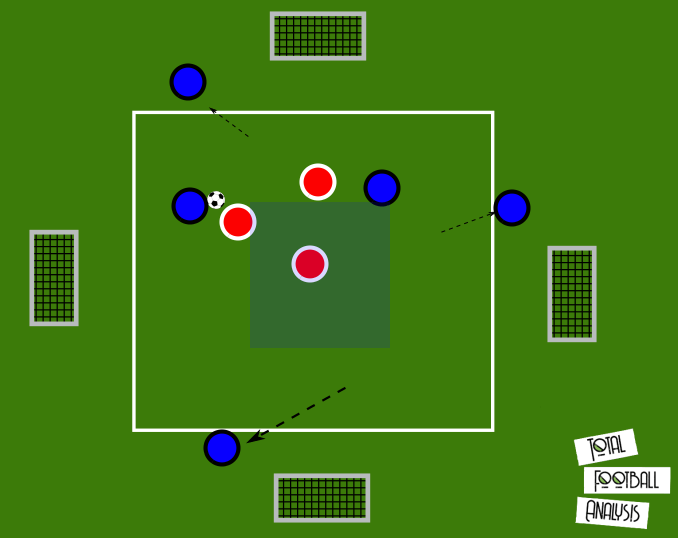 Finally, putting this into even more of a game situation, a 7 + GK v 7 + GK is an effective way to bring out our collective goals from this session. Playing the outfield players in a setting that encourages a man-to-man press will increase the likelihood of turnovers and therefore produce more moments for us to work on attacking transition in this game situation.

Either team can start, with both working on attacking transition once they win possession, but in the example shown below the red team have possession. 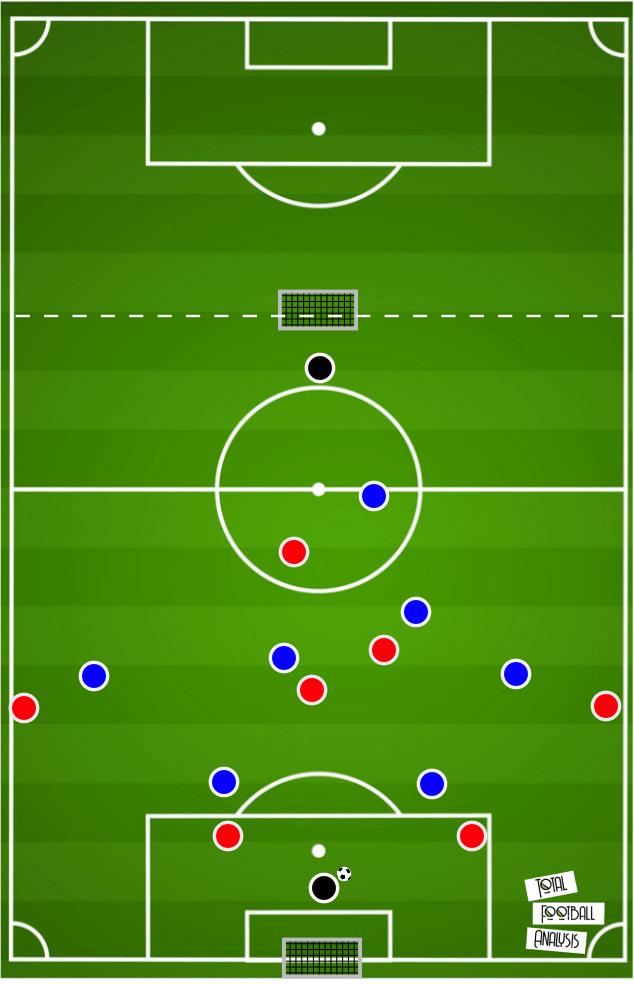 Naturally, the red team are looking to break forward and score against the opposition keeper. However, upon a turnover, we are looking for the blue team to now put into practice today’s learning and forge a goalscoring opportunity, or retain possession in this moment if this is not possible.

If there is the chance to play forward first then this is what we want them to prioritize. In order to do this, goals scored within eight seconds of a turnover can be worth double. 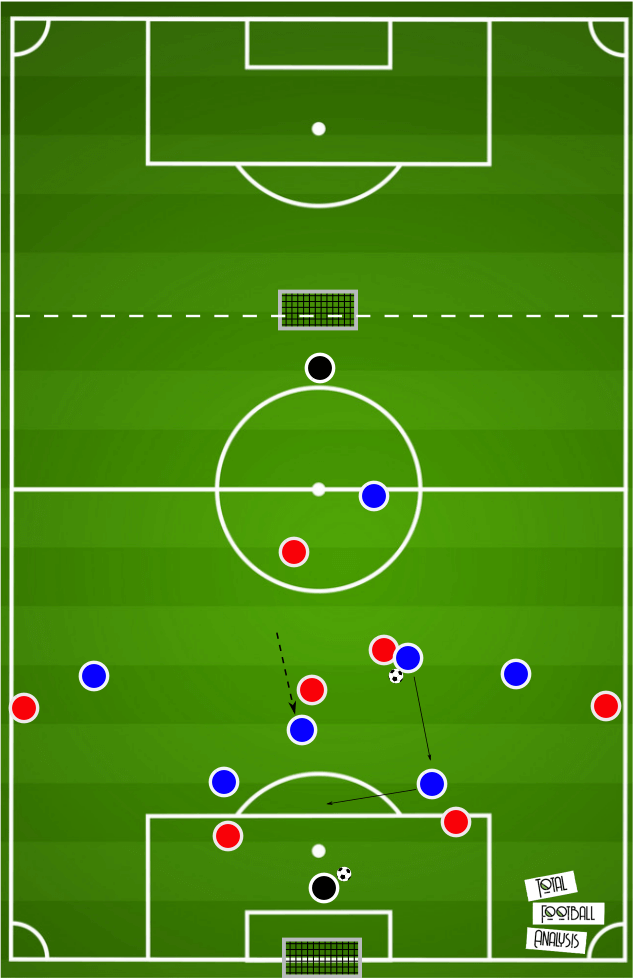 If this first option isn’t available then they can recycle possession, however, we still want to challenge them to put the learning specifically from part 2 of this session into practice. Can the goalkeeper of the team in transition be brave, step forward, and provide that deeper option for example, before looking to break lines, or if the ball is won further forward, can the blue team’s number six do this as well. 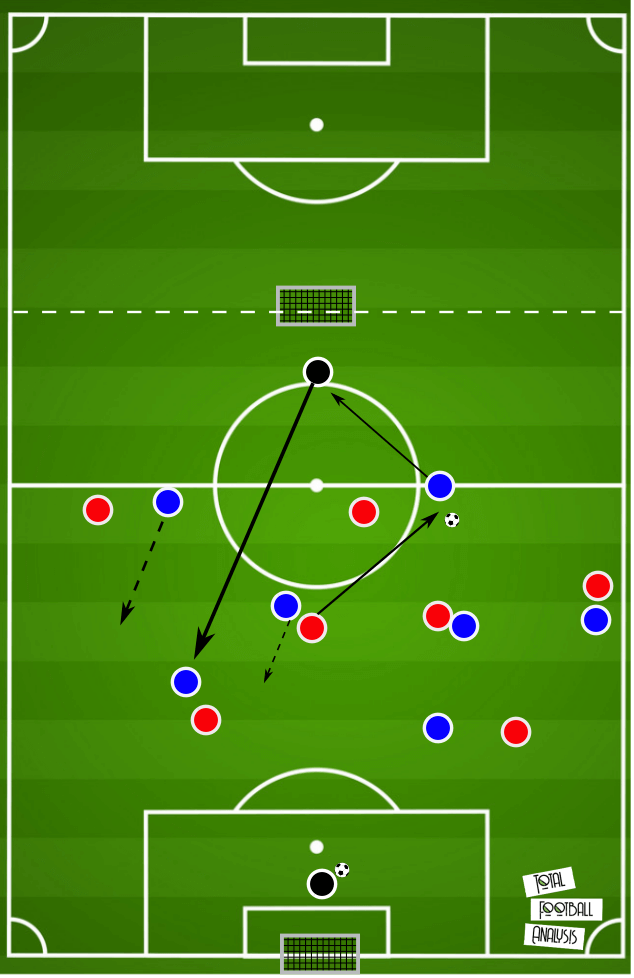 This set of practices merely suggests a few options to explore in order to get the principles of attacking transition across to our players, firstly in more isolated practices, or at the very least on smaller scales, before bringing them into a game situation and allowing them to apply these on a large pitch.

Players should be challenged to react quickly to winning possession, playing sequences of fast paced passes off of minimal touches, whilst looking to provide width and height in this moment of the game. They should look to play forward first if that is possible, and ensure this pass is supported by nearby players so the receiver isn’t isolated, but equally if this isn’t on can they play a lateral or backwards pass, and can this open up a passing line for them to play forward into as well. If not, can they be mature enough to show composure in this moment and retain possession.