Blocking: How to gain an edge from corners

Blocking and/or screening from corners and set-pieces is a way to generate space in the box which should grant either the first-time shot or create an aerial advantage in your favour, but when should you use it and what is it?

Blocking is when, from an attacking set-piece, you place 2 players directly next to each other in and around the penalty area against teams that primarily man-mark. One of these players is labelled the blocker, one is the runner.

As we’re facing a team that man-marks, both of these players are then marked, it is the blockers job to delay the runners marker by whatever means necessary – that could be by positioning himself in between the runner and his marker giving the runner a crucial second or 2 to make his run, by giving the marker a quick grab of the arm to hinder his run.

Whilst technically a foul, the referee will simply have too much going on to see it clearly or may deem it too soft to give. It’s also worth noting that England often used this technique at the World Cup and it went unpunished – even with VAR added into the mix – so chances are you’ll get away with it! 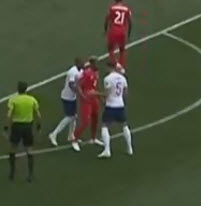 John Stones (#5) and Ashley Young (#18) are on the edge of the box for a corner against Panama, Ashley Young doesn’t have a man-marker assigned (not that it makes much of a difference!) so that allows him to get in a superb position to block Stones marker. 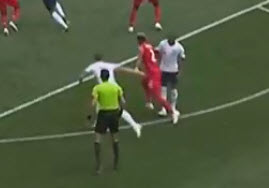 Young grabs his markers arm (right in front of the referee!) for a brief second giving Stones a slight head-start which allows him a free header in the box, which results in a goal (due to other careful planning which we’ll look at later on)

What are the advantages?

Blocking gives so many advantages I’m simply amazed that more teams aren’t doing it, other than the obvious of creating space for a free run:

We now understand the basics of blocking, so now we come to the fun bit, creating routines to coach and ultimately put into practice on match-day.

For some inspiration (or you can just use these if you’re lazy) I have compiled some examples of routines that use blocking, with video examples so you can see them in action and the end result

For more on Midjtylland’s inventive set-pieces, take a look at my analysis of their set-piece goals from the 17/18 season here and here.

Hopefully, now you understand the basics of blocking and can come up with your own routines that utilise this very useful skill. I’d love to see the routines you make or put into action so contact me at @from_the_wing on Twitter with videos/pictures of your routines!