We’re not even halfway through the season, yet the Premier League has shown us many surprises. Arsenal are top of the league, and Chelsea and Liverpool are not even in the top six.

One of the surprises is Newcastle United, standing third in the league with 30 points. Having already played against five of the traditional top six clubs in Manchester City, Liverpool, Manchester United, Tottenham and most recently Chelsea, they have picked up two wins, two draws and one loss. This is already a better record in comparison with their performance against the top six clubs last season, having only won once.

Nonetheless, their results against the top six are not the only thing we should be appreciating about Newcastle United this season. With only 11 goals conceded in the competition, they are tied with Arsenal for the least goals conceded in the Premier League season so far. This time last season, after fifteen games, they conceded more than double the amount with 30 goals.

Their xG against is 27. if they conceded 27 goals they would have had the third most goals conceded. With 29 goals scored, they are not one of the top goal-scoring teams, so we can see that the reason for their high standing is indeed their defence and goalkeeper.

In this tactical analysis, in the form of a team scout report, let us take look at how their back line is structured, the tactics they use to defend in different situations and how the whole team, from the striker to the goalkeeper, plays a part in stopping their opposition. It will essentially be an analysis of why Newcastle’s defence is so good.

Eddie Howe employs a 4-3-3, with Kieran Trippier as the right-back, Fabian Schär and Sven Botman as the centre-backs and Dan Burn as the left-back. Often, Dan Burn comes in at centre back and Matt Targett plays on the left. 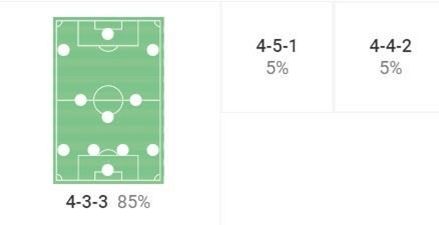 Eddie Howe does not like his team to be too rigid. Oftentimes, the wingers will drop back to the midfield and the 4-3-3 becomes a 4-5-1.

Although Eddie Howe does not tend to change the back four too much, they have a few good options on the bench in Jamaal Lascelles, Jamal Lewis and Javier Manquillo.

Kieran Trippier, being the highest chance creator in the squad, often moves forward. On the counterattack, this prompts the two centre-backs to temporarily shift to the right covering the right and right-centre sections, while a central midfielder drops back, ensuring that there are always four defenders to stop the attack.

Defending attacks from the wide areas

Newcastle, being a very fluid team in defence, often have midfielders or wide players coming back to defend during counterattacks. Their main aim is to regroup to having a back four as quickly as possible covering the box, while also ensuring the ball carrier on the opposing team is being taken care of. 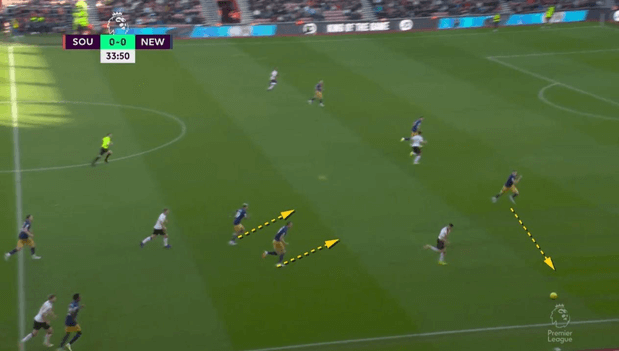 We can see an example of that in the image above. Rather than running towards the player receiving the pass, the two Newcastle players regroup and get back to having four defenders on the back line, while one player goes to mark the Southampton player who is receiving the ball.

Although the two Newcastle defenders going into the box will be left exposed in a two versus two situation, the two players running towards the box reach in time so that there are once again four defenders in the back line, which makes it much harder for the Saints to have a target in the box to cross the ball to.

The image below is another example of this. One player defends the ball carrier of the opposing team, and four Newcastle players scramble to restore a back four as quickly as possible.

Even though there is only one Chelsea player going into the box, the Newcastle players go into the box to create a back four, rather than one more player pressing the ball carrier to try and regain possession. 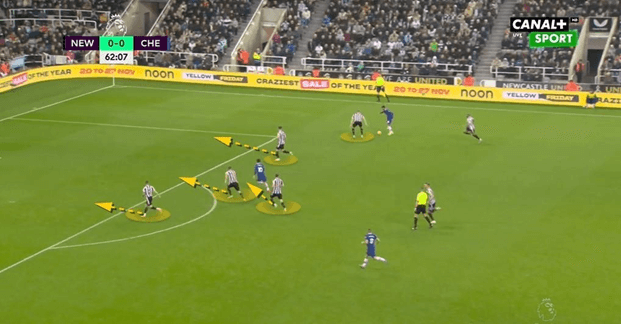 This is done with the confidence that one of the midfielders or wingers will come back to help in defence, and that is exactly what happens. Midfielder Joelinton has been a crucial player for Howe’s side this season. We can see in the picture below that while the back four is in the box, Joelinton drops deep to press the ball carrier.

Adapting to the situation

With such a free-flowing style of play, the 4-3-3 sometimes changes to a formation that is more suitable for the situation. In the picture below, we can see them playing in a 4-5-1. Since it was late in the game, and they were leading, it was better to drop two attackers back to the midfield to have more security. With the extra men, they can play between the lines, assuring that the space between the defence and midfield is covered. 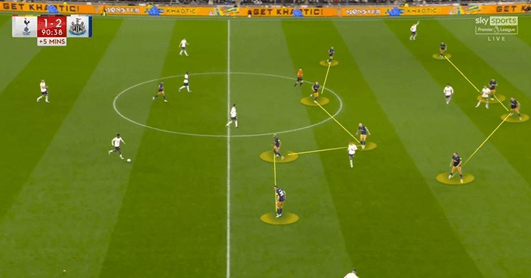 With such changes in formation, Newcastle often have forwards playing in midfield and even coming back in defence as we have seen above. It seems that Howe has instilled a sense of tenacity in the squad. From the picture below, we can see that even just two minutes into the game, there are eight Newcastle players defending. 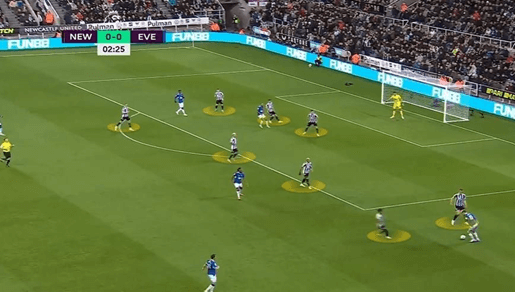 Having midfielders helping out in defence not only strengthens them by having more players to defend with but also helps them get the ball out as they can pass or carry the ball out, rather than clearing it and giving possession away.

In their game against Manchester United, in which they drew 0-0, we can see again that eight players are defending while seven of them are in the box. 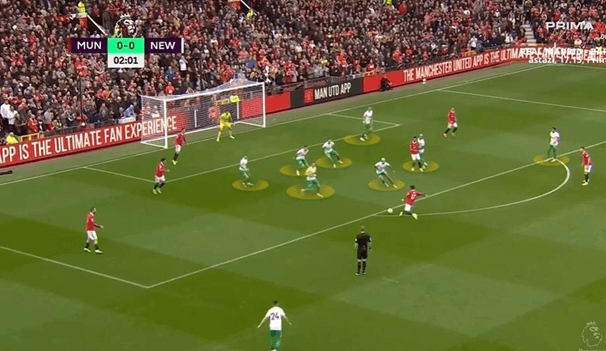 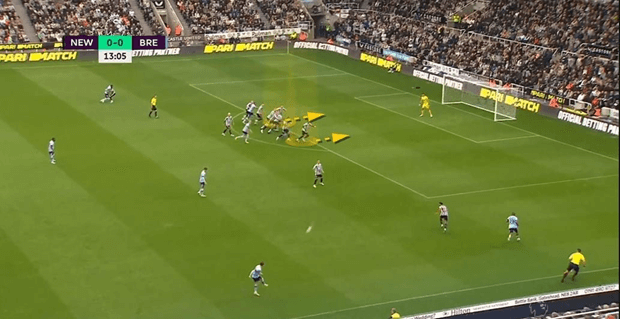 In the picture above, we can see that when defending set pieces, they usually tend to drop deep and intercept crosses or passes rather than trying to play the offside trap. This leaves less margin for error and ensures they actually have a chance at clearing the ball rather than hoping for Brentford’s attackers to be in offside positions.

Nick Pope also plays a huge role when defending set pieces as he is not afraid to command the box. With 86% percent of total interception attempts being successful, we know that he often comes up to intercept crosses and passes into the box.

Defence – From the front to the back

Since Newcastle do not use a high block, Newcastle’s attackers press with confidence, having multiple players trying to win the ball, knowing that the defence will stay deep. This allows the team to win the ball in higher positions in their own half, which can lead to hitting the opponent with a counterattack.

From the data below we see that, again, Joelinton proves his importance in the opposition’s half and in transitions as he recovers the ball 4.5 times per game in the opposition’s half, which prevents the opposition from attacking on the counter after possession is lost. In case of a full-back getting caught up the pitch, he is not afraid to drop back and help the defence as we can see from his defensive territory. 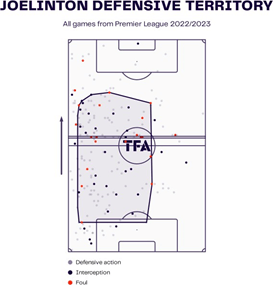 After scoring only 29 goals so far, Newcastle will have to rely on their defence to keep their streak going.

They have figured out how to deal with almost every situation from counterattacks to set pieces. The Magpies have impressed many, but being only 15 games in, there is still a lot more to come. 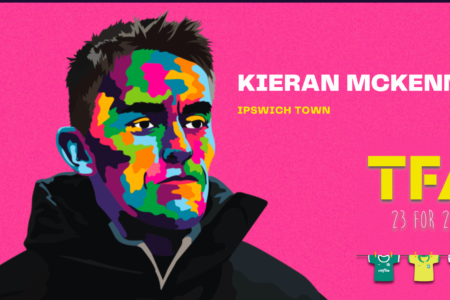