In the first round of 16 matchups at the 2022 FIFA World Cup, the Netherlands were able to overcome the United States by a score of 3-1 to advance to the quarterfinals. After a promising start to the match for Gregg Berhalter’s side, the Dutch gained control, winning the midfield battles and being clinical in their counter-attacking moments.

This tactical analysis will take a look at some of the key tactical trends in this knockout round match, and show why this matchup between the United States and the Netherlands was an interesting tactical chess match. 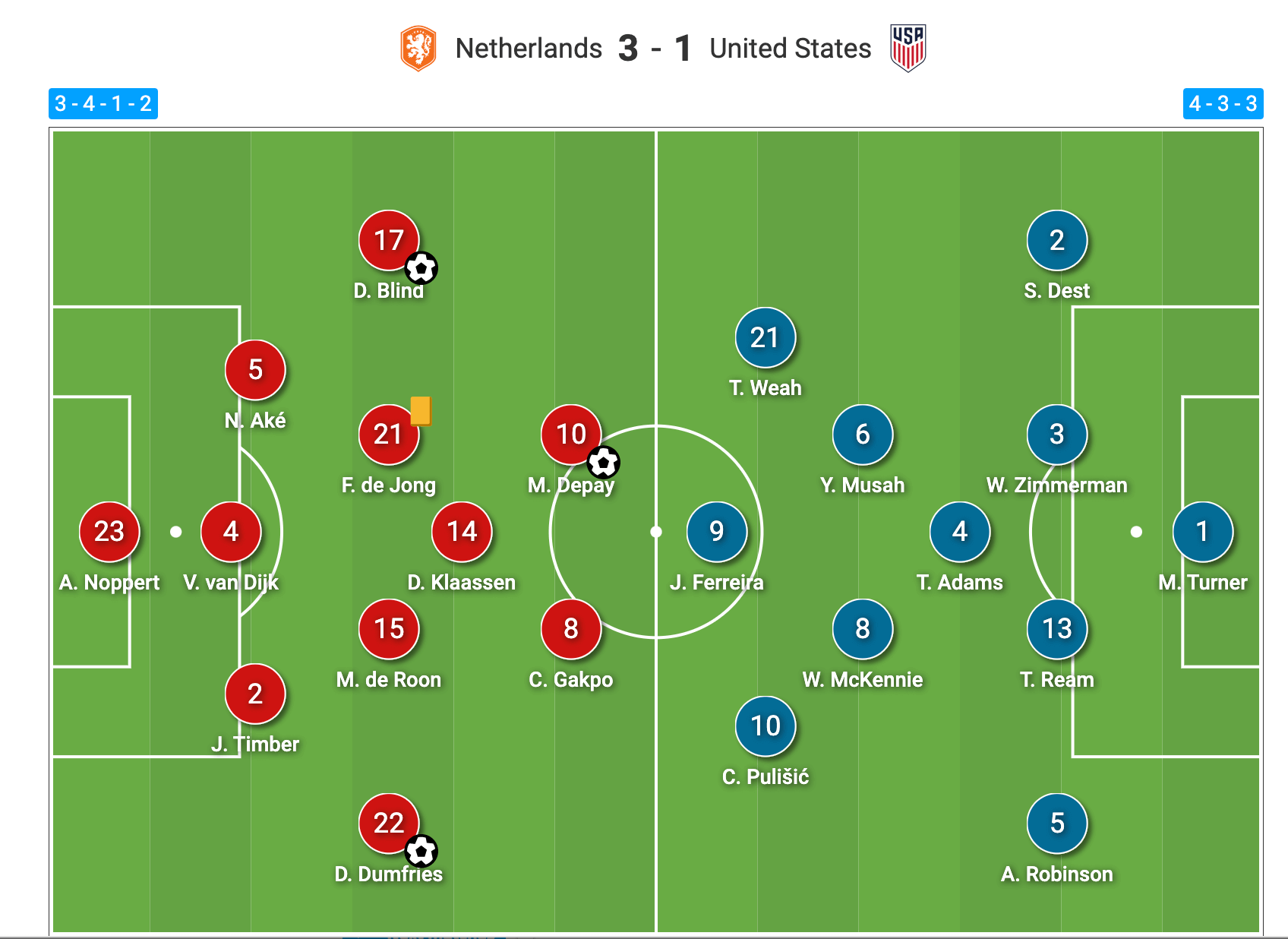 Louis van Gaal made no changes to his Dutch side that beat Qatar 2-0 in the final group stage match. Andries Noppert continued in goal, with Ajax’s Jürrien Timber continuing to partner Nathan Aké and Virgil van Dijk in a back three. Daley Blind and Denzel Dumfries continued as the two wide midfielders, with Frenkie de Jong and Marten de Roon partnering in central midfield. Further forward, Davy Klaassen played in behind Barcelona’s Memphis and Dutch phenom Cody Gakpo.

Gregg Berhalter made two changes from the last group-stage match against Iran. Arsenal’s Matt Turner continued in goal, with Sergiño Dest and Antonee Robinson playing as the two fullbacks. In central defence, Walker Zimmerman returned to the starting XI to partner Tim Ream, replacing Cameron Carter-Vickers. The midfield three remained unchanged, with Yunus Musah, Tyler Adams, and Weston McKennie all continuing. Christian Pulišić and Tim Weah continued on the wings, with 2022 MLS Young Player of the Year Jesus Ferreira coming into the starting XI to replace the injured Josh Sargent.

One thing that the Dutch did really well to prevent the United States from progressing the ball forward was their tactic of man-to-man marking in the midfield. Throughout this World Cup, Berhalter’s midfield three of Musah, Adams, and McKennie have been key to the United States progressing the ball into midfield and creating chances. In fact, Tyler Adams was MOTM in the first two group-stage games for the US, as well as being their top player in a number of key stats.

When the United States were looking to move the ball into the middle and final third of the pitch, the Dutch midfielders and centre-backs looked to man mark the forward players, eliminating the possibility of building centrally through these key players. At times, when Ferreira dropped deeper into midfield to attempt to become a forward passing option, van Dijk would track him into midfield, preventing any possible passes. 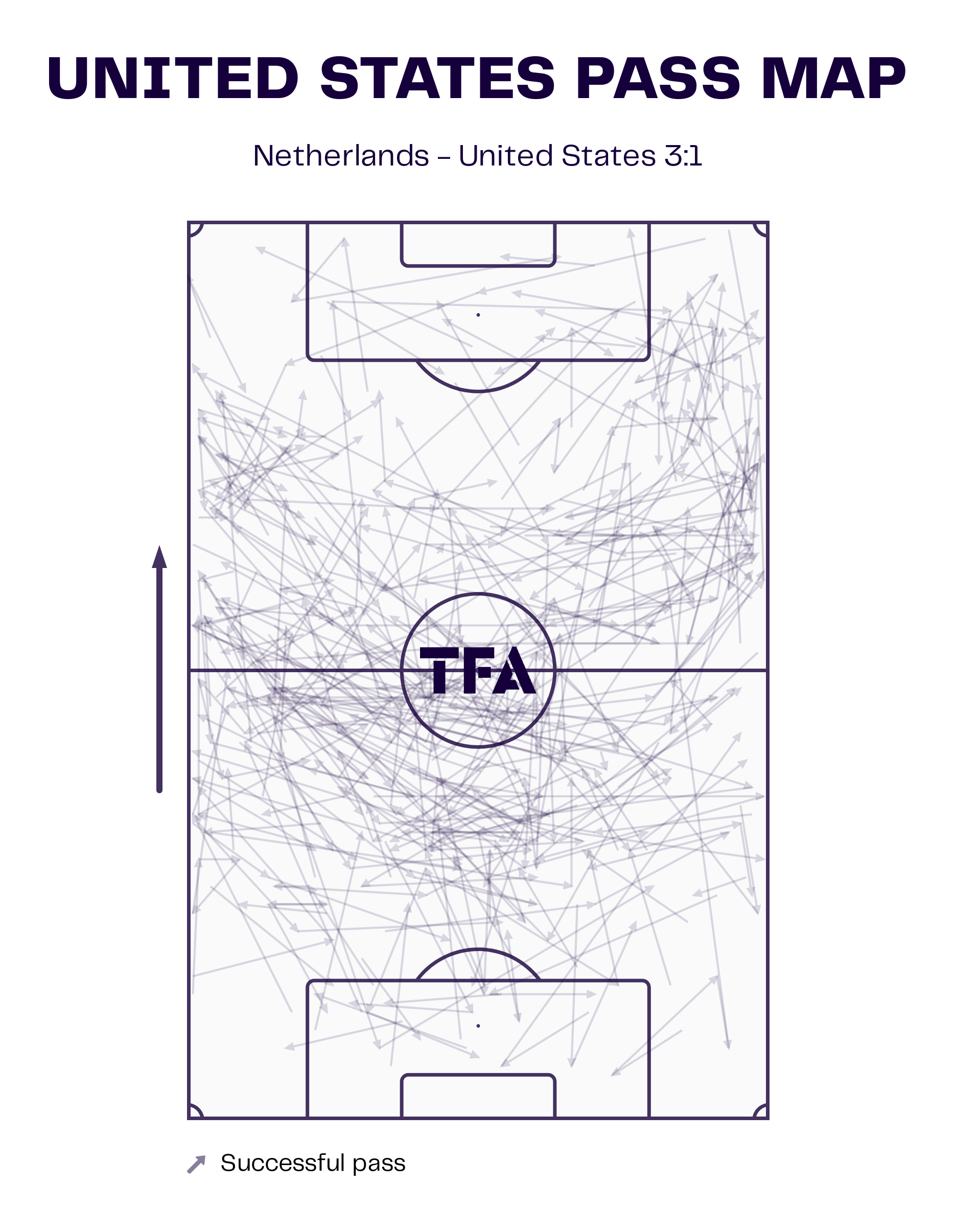 The data viz above shows the United States pass map from the match, and some conclusions can be drawn from it. While the United States were able to complete passes in the central areas in their own half, those were mainly between the centre-backs, or the midfielders dropping into much deeper positions than they wanted to when looking to gather possession. As the pass map moves into the Dutch half of the pitch, the successful passes in the central areas get much less frequent, with this being down to the man-marking by OnsOranje in these areas of the pitch. The following images show some examples of this successful tactic utilised by Dutch manager Louis van Gaal. 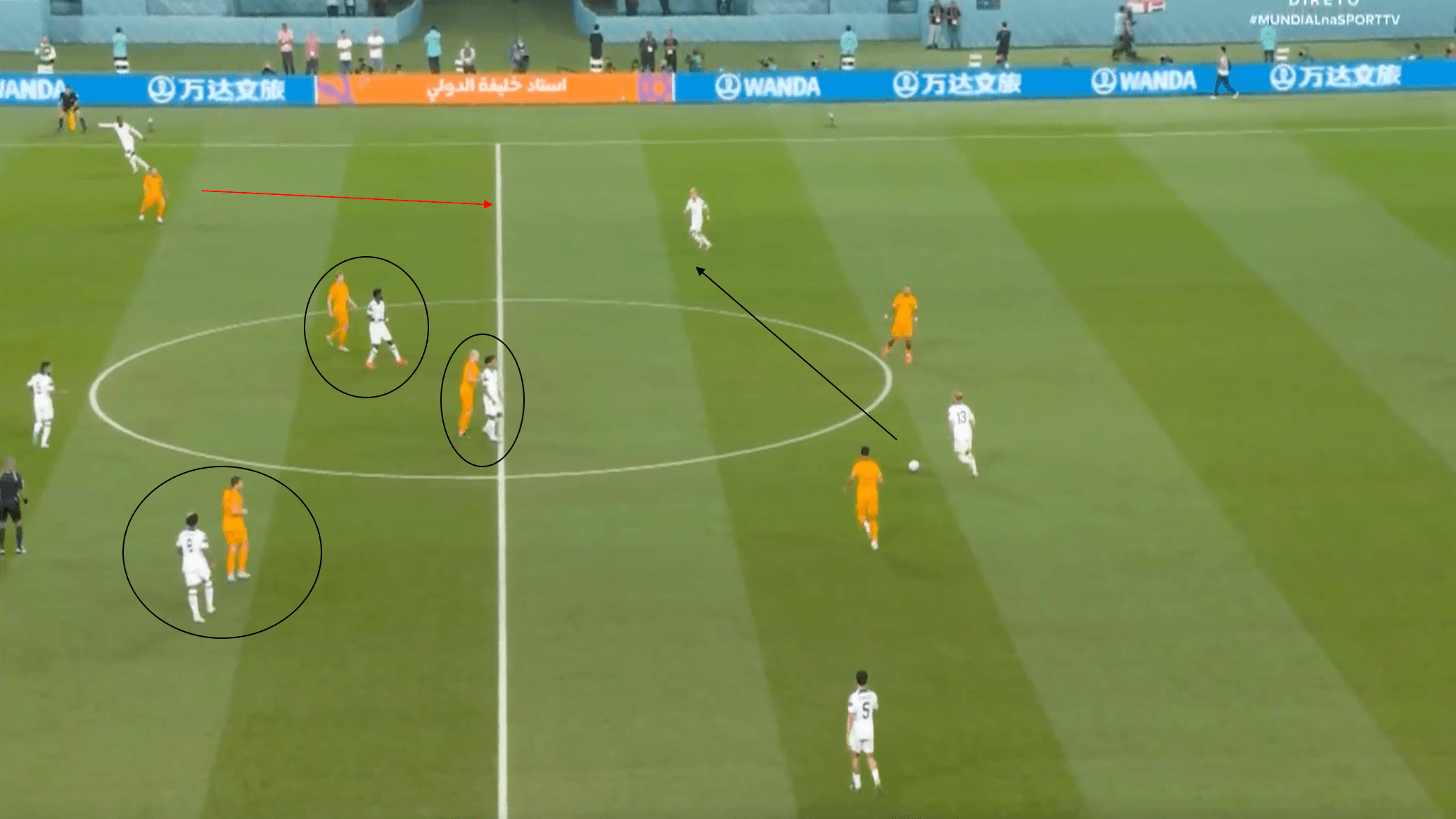 The image above shows an example of this man-to-man marking in midfield that van Gaal utilised to shut down the ability for the United States to build through their midfielders. In this United States attacking phase, notice how all three of Adams, Musah, and McKennie are being man marked by the Dutch midfielders, preventing Zimmerman from playing the ball to any of the three, and eliminating any central passing option.

This forces the central defender to play the ball wide to Dest, who is instantly closed down by Blind, as he is aware this is Zimmerman’s only other passing option. While Dest is able to get the pass off down the line to Weah, the United States attack stalls there, with the Dutch able to regain possession and set off on a counterattack. 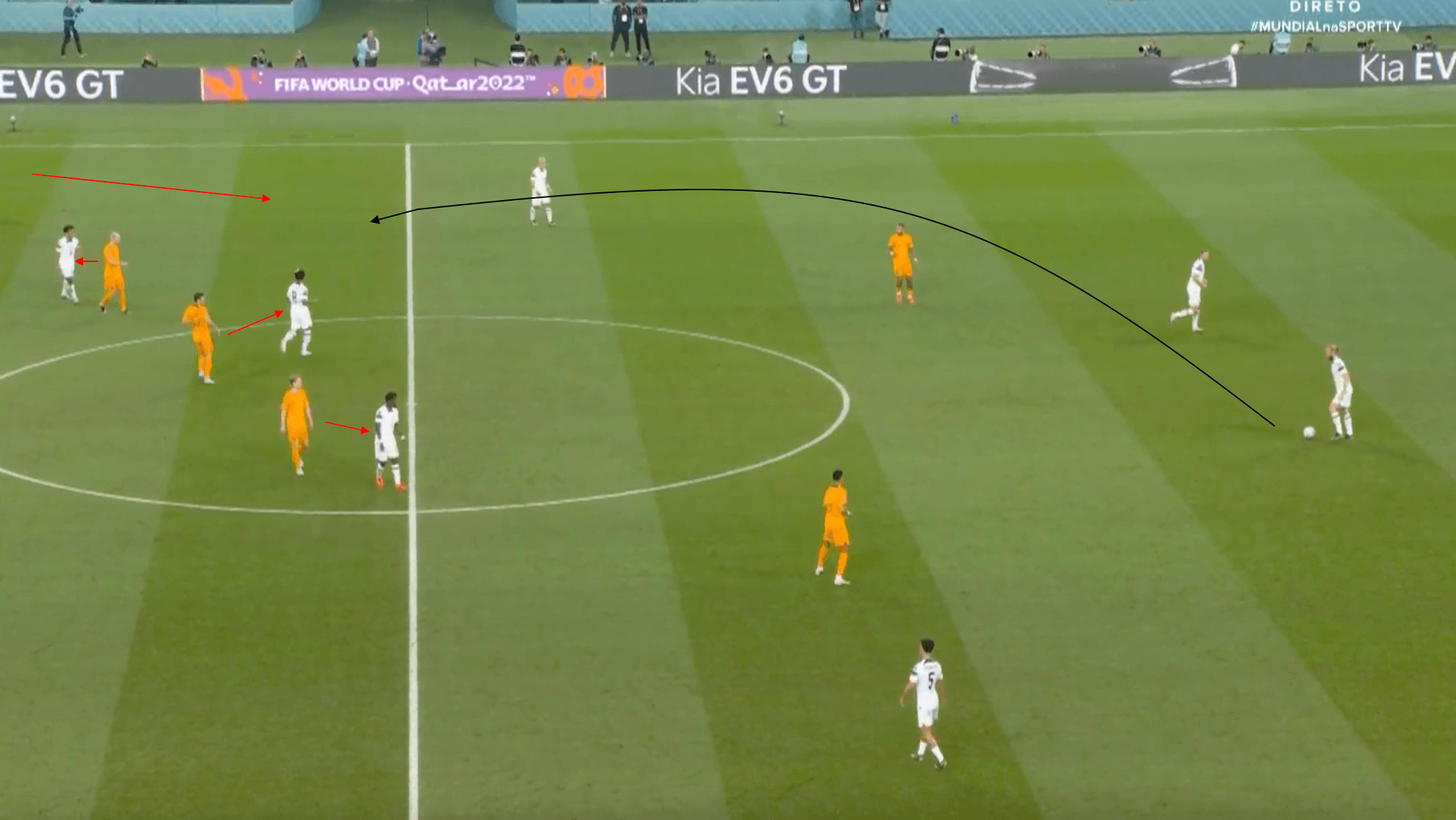 The image above shows another example of this Dutch man marking forcing the United States into a turnover. The three American midfielders are once again being man marked by the Dutch midfielders, eliminating any possibility of them receiving the ball from the centre-back. As a result, Ream looks to play a longer pass into the path of Dest, but overhits it, allowing Daley Blind to run onto it. This sets the Dutch off on a counterattack, which almost results in a chance for them to score.

As was similar to the first image, the way that the United States looked to build in their three group stage games, all to great success, was eliminated by the tactics of Louis van Gaal. The success that van Gaal had with man-marking the United States midfielders out of the game resulted in plenty of turnovers, as well as counterattacks, for the Dutch players to gain chances from. 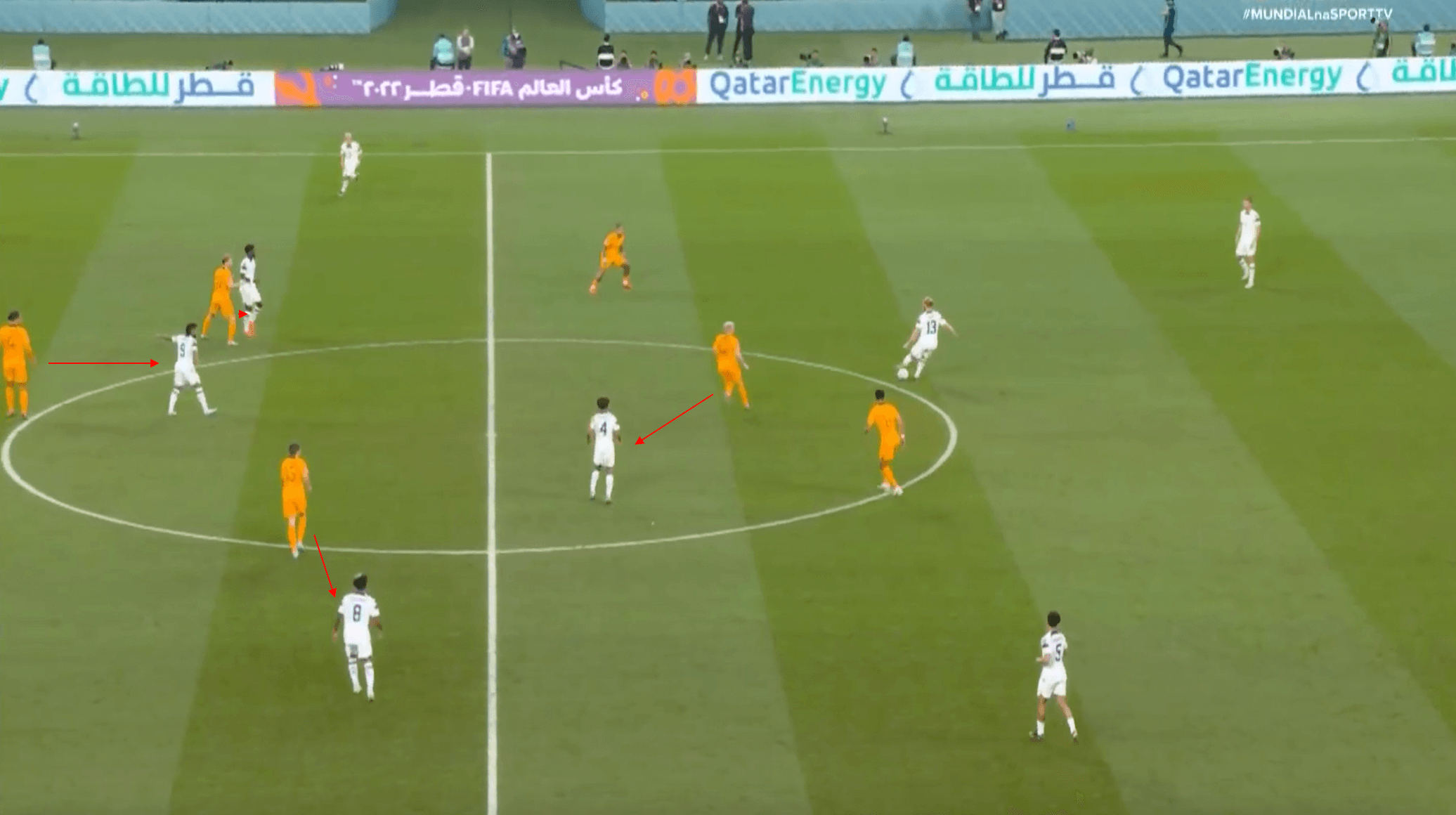 As previously mentioned, when Ferreira looked to drop into midfield to facilitate build-up play and become an option centrally, van Dijk would follow him. The image above shows an example of this, which also highlights the ability of the Netherlands to once again eliminate any space the United States would try to find in midfield. In this specific phase of play, the ball is eventually played out wide, but possession is lost and the Dutch are once again able to counter.

While the Dutch utilised man-marking in midfield to great effect to give them an upper hand in the midfield battle, the United States’ lapses in concentration defensively hurt them, and ultimately led to their defeat, as the next section shows.

After only conceding one goal through their three group stage matches, the United States conceded three against the Netherlands in their round of 16 matchup, with all three of the goals easily preventable. All three of the Netherlands’ goals were scored due to poor marking in the penalty box by the US defenders. This section will take a look at the three goals the United States conceded in detail, and how they all could have been preventable by Gregg Berhalter’s side. 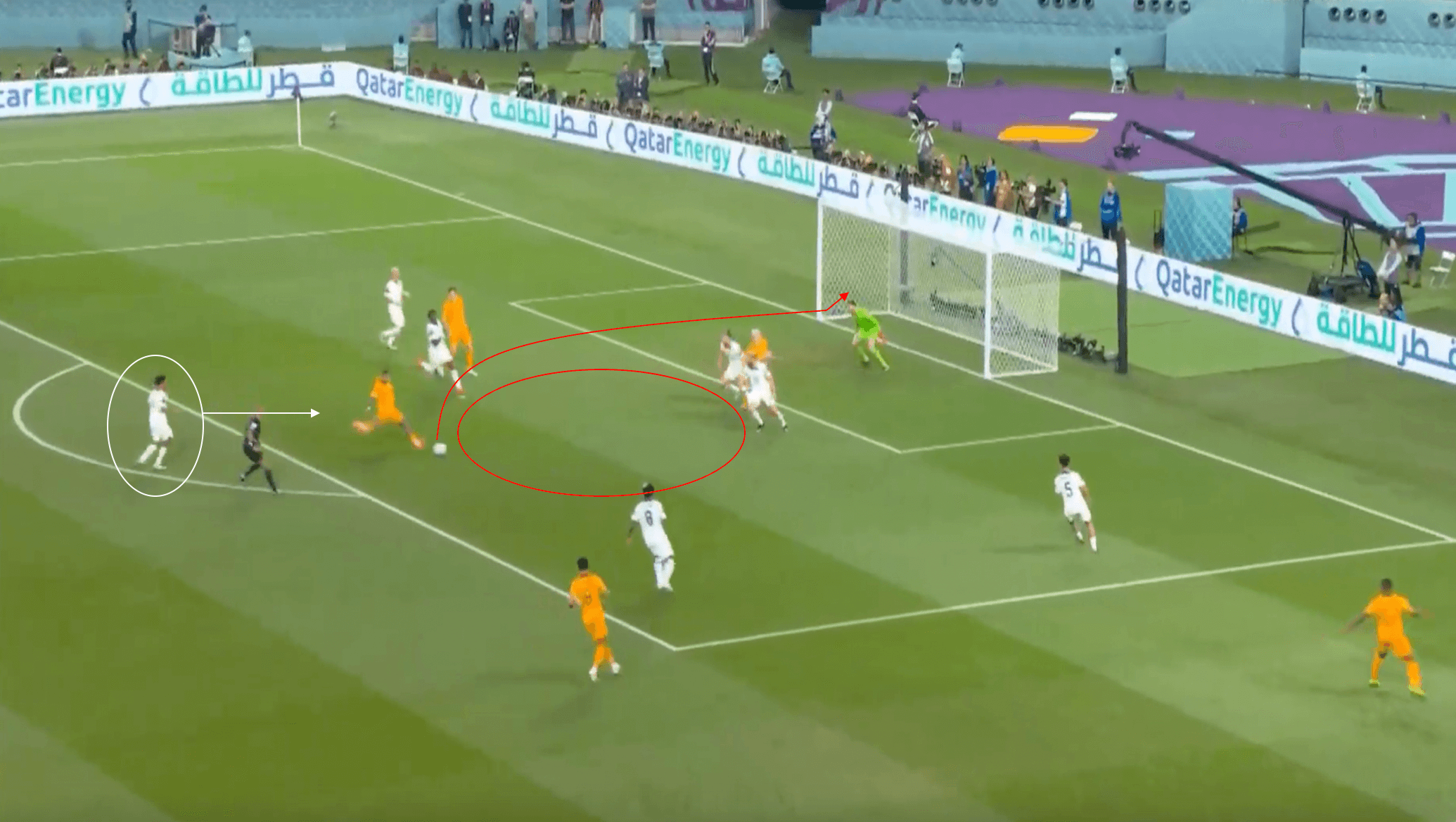 The image shows the first goal that the Dutch scored, which highlights the poor penalty box marking by the United States. After the United States loses possession in the Dutch defensive third, the Netherlands are able to execute a beautiful phase of total football passing, reaching the final third with relative ease against the American defence.

As Dumfries drove with the ball towards the byline, Memphis was able to lose his marker and run into the penalty box unmarked. As the ball reaches the striker and he gets a shot off, there are no United States defenders within five yards of him. As the image shows, Tyler Adams is slow to track back, which results in the Dutchman finding the space at the edge of the penalty box. With no defenders closing him down, Memphis is able to get a shot off and slot the ball past Turner in the United States net. This was an easily preventable goal, but due to a lack of tracking back and marking in the box, it resulted in the first goal for the Netherlands. 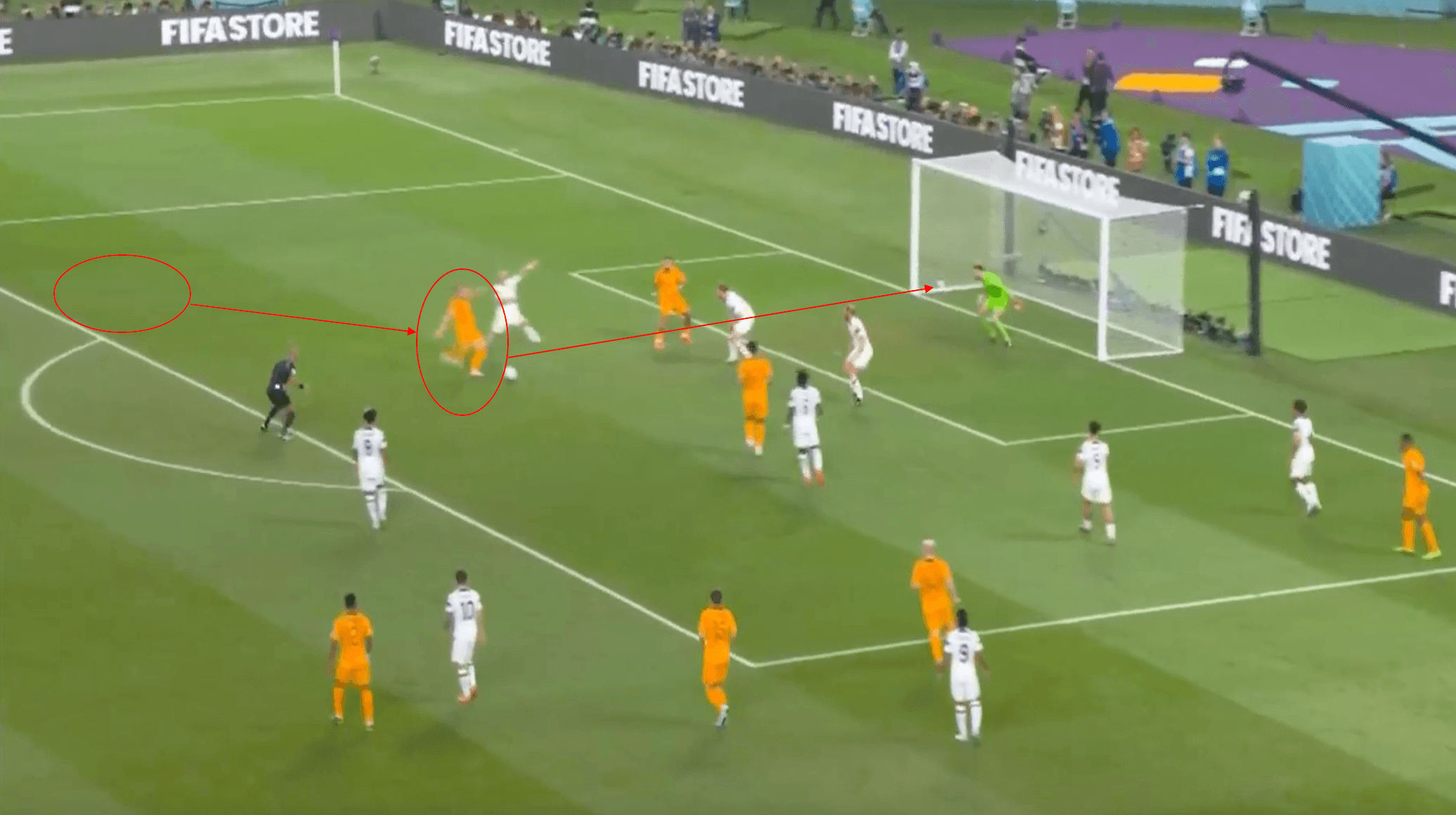 The second goal from the Netherlands begins from a similar situation to the first one. This goal however, occurred with essentially the last kick of the first half, putting to bed almost any chance of the United States making a second-half turnaround. The Dutch take a throw-in just inside the United States attacking third, with the ball finding its way to Dumfries on the near sideline.

The Dutch wingback is able to drive to the byline before sending a cross back across goal and towards the back post area. The opposite wingback, Daley Blind, makes a run from deep and is able to get in front of Dest at the back post, with the United States fullback slow to react to the movement of Blind. As a result of this, the defender is able to get to the ball before Dest, and subsequently fires a shot past Turner.

Again, this goal from the Netherlands was preventable from a defensive standpoint for the United States. If Sergiño Dest was switched on and checked his shoulder to recognise the late run of Blind, he likely would have been able to get to the ball first and clear the ball away from danger. 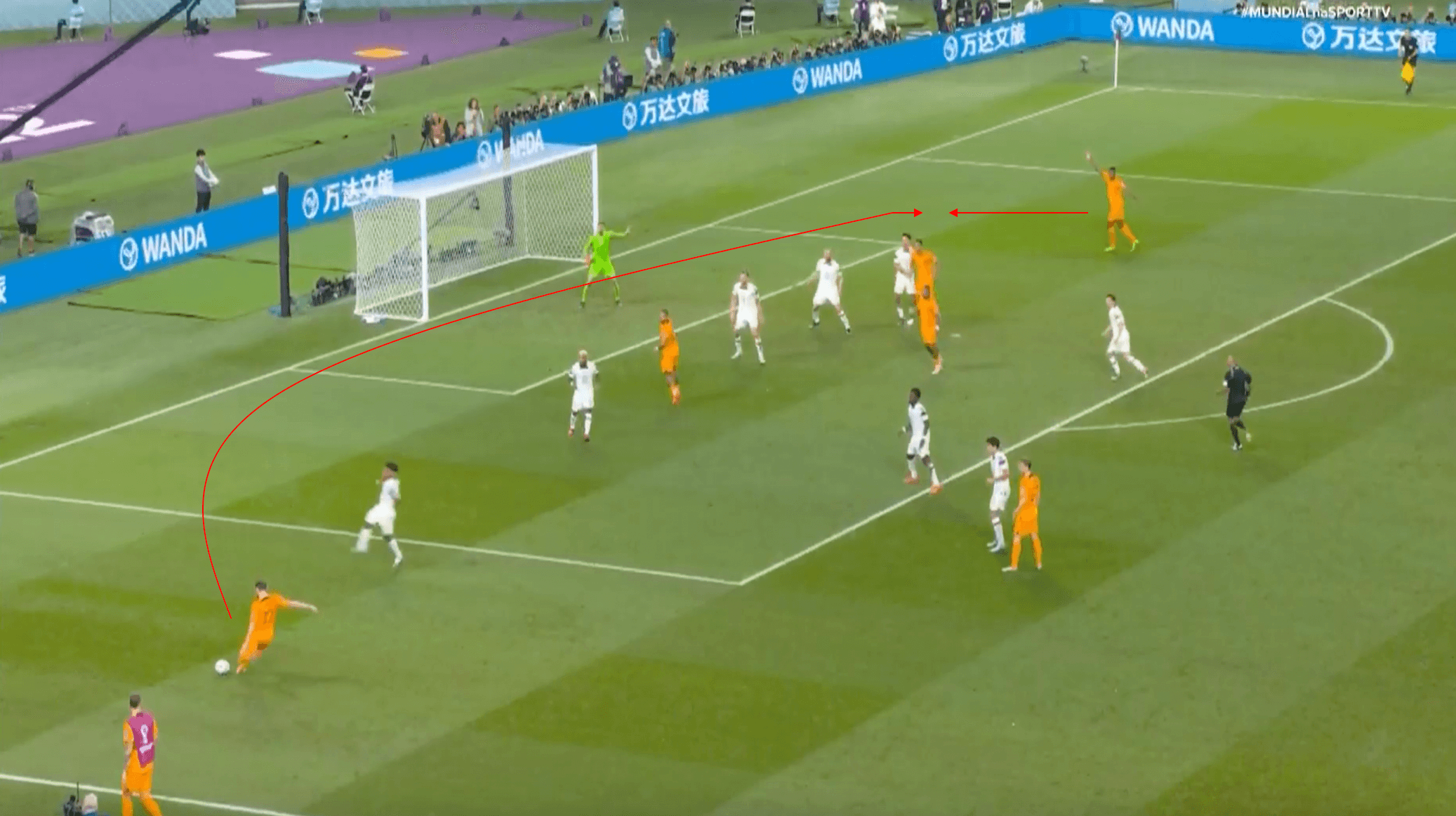 The image above shows the Netherlands’ third goal, which is again due to poor marking and space recognition by the United States defenders. In the phase of play above, the United States are defending a Dutch attack, with the ball in the possession of Blind on the near sideline. At the back post, Dumfries finds himself unmarked and in acres of space, and calls for the ball as a result. Blind’s ensuing cross goes all the way to the back post, and finds the unmarked Dumfries, who is able to finish first time past Turner.

This specific defensive lapse occurs from Robinson, who is tucked too far inside, leaving the space for Dumfries to sneak in at the back post. As this section has shown, the United States did not play poorly throughout the whole match, but lost the match as a result of three poor defensive errors that could have been prevented.

As this tactical analysis has shown, while the Netherlands seemed to come away with an easy victory and passage to the quarterfinals, this was not necessarily the case. This was an intriguing tactical chess match from both managers, with the man-marking tactics of van Gaal, partnered with the few crucial lapses in defensive concentration by the United States, being the reasons the Dutch came out victorious. As a result, the United States are packing their bags to head home, while the Netherlands have a date with Lionel Messi and Argentina in the quarterfinals. 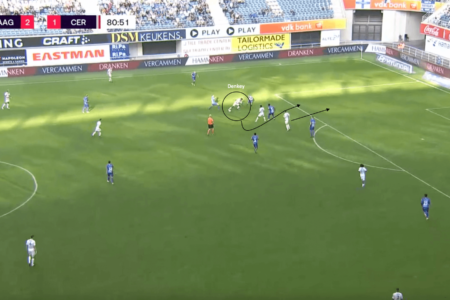