Overlapping runs and aggressive defending: How Chris Wilder has used his centre-backs at Middlesbrough – tactical analysis

Chris Wilder made a reputation for himself in English football during his time in charge of Sheffield United from 2016-2021.

When the ex-fullback began his tenure at Bramall Lane, the team were in League One. By the time he had walked away early last year, the Blades had already reached the promised land of the Premier League for the first time since 2007.

Wilder was out of a job for the guts of six months after his departure in March 2021 before Middlesbrough eventually came calling in November. Neil Warnock had just been dismissed as the manager and the board sought Wilder’s help to prevent the team’s season from nose-diving even further.

When the 54-year-old took over at the Riverside Stadium, Middlesbrough were sitting in seventeenth-place in the Championship and had been extremely inconsistent in the league. Now, Boro are fifth after just eight games of his reign.

Wilder has not only stabilised the ship from its prolonged plunging but is now sailing it safely back to shore. While the voyage still has quite a long way to go, Middlesbrough look like possible play-off contenders now.

This article will be a tactical analysis of Middlesbrough under Wilder in the form of a team scout report. It will be an analysis of the side’s tactics with a particular focus on Wilder’s use of a back three.

Middlesbrough have used a plethora of different tactical formations in the 2021/22 campaign so far. The consistent changing of structures connotates the team’s inconsistency quite fittingly. 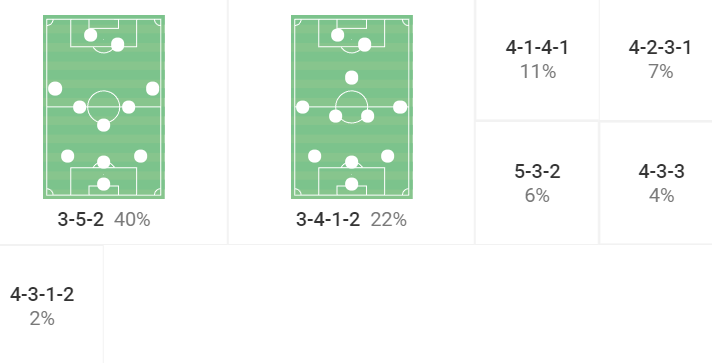 At Sheffield United, Wilder took a similar approach. The Blades rarely saw a change in formation regardless of how poor their form was, and it is unlikely that, under his management, Boro will either.

Wilder’s Sheffield United were using a dogged style of football, playing a flexible 3-5-2/5-3-2 with overlapping wide centre-backs supplying overloads on the flanks and putting crosses into the box. This was a tactical innovation never seen before in England’s top-flight division.

Unfortunately, for the head coach, this Middlesbrough team he inherited are not quite as capable of fulfilling all of these tactical functions because of the personnel available and so Anfernee Dijksteel has been tasked with being the most advanced of Boro’s back three in possession which can be seen from their average pass map from a recent game against Blackpool: 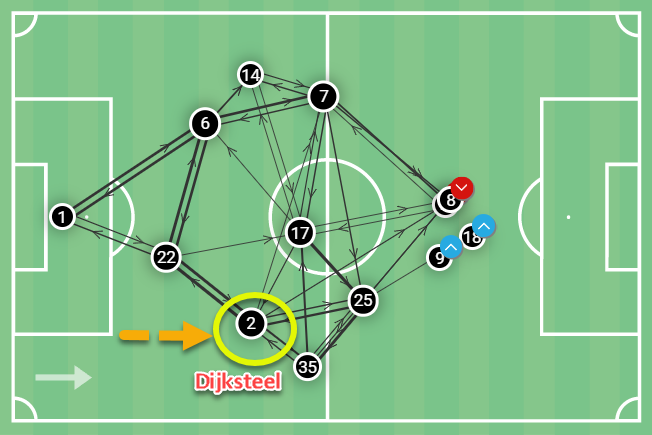 Generally, Dael Fry and Paddy McNair operate as the remaining two centre-backs and Sol Bamba is also seen quite regularly too. But as the other two central defenders are not as well-equipped in the attacking phases, Wilder instructs them to stay back.

Dijksteel’s role in the team is tactically vital to its functionality which will be analysed in further detail in later sections of this article.

While having a tendency to play a very stereotypical English game by going long from goal-kicks and winning second balls higher up the pitch, Middlesbrough do still try to play out from the back when applicable.

Boro have players who are comfortable in possession such as Dijksteel, McNair and Fry and so playing out as opposed to booting it long is a useful tool for them.

When Wilder’s side are in the build-up phase, Dijksteel will push high and wide, acting as a temporary right-back. This is his natural position and so it suits the Dutchman perfectly, but it also facilitates a chain of events.

The central and left centre-backs move wider and operate as a regular two-man pairing while allowing the goalkeeper to drop in between them, creating a three-man first line of pressure. 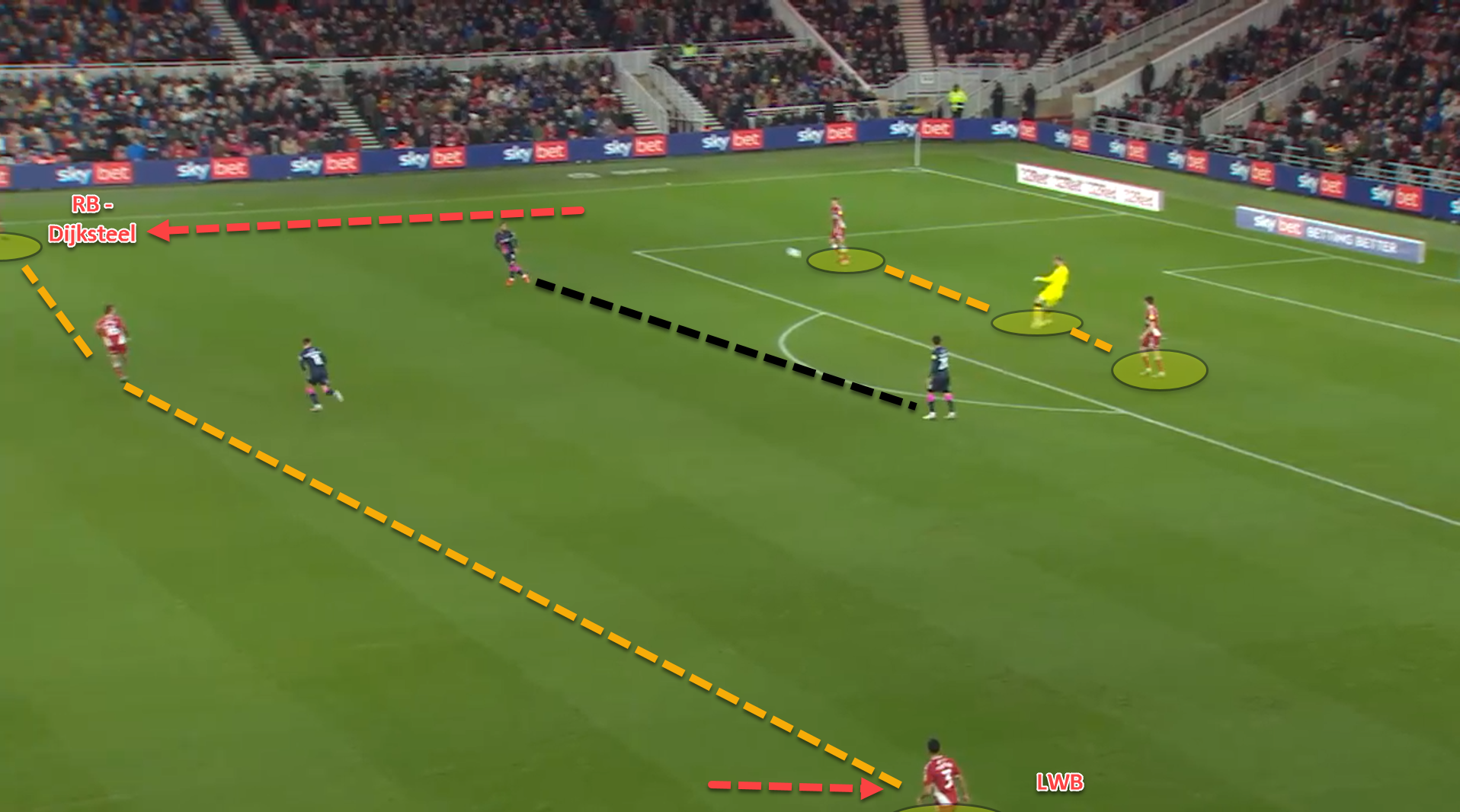 The left-wingback will then drop lower and the back three becomes a back four in possession while the right wingback moves really high to the last line and becomes an auxiliary right-winger which accommodates Dijksteel too.

This gives Boro excellent depth and width, as well numerical superiority with the centre-backs when they are playing out from the back. The shape resembles somewhat of a lopsided 4-3-3 during settled positional attacks. 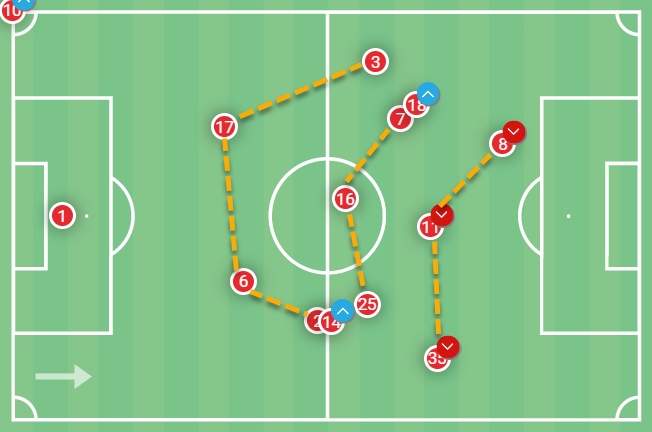 During this phase, Middlesbrough have a tendency to play to the fullbacks before bouncing the ball inside to the wide central midfielders.

They create a triangle with the nearest centre-back, wingback and number ‘8’ in order to progress the ball further up the pitch from deeper areas. 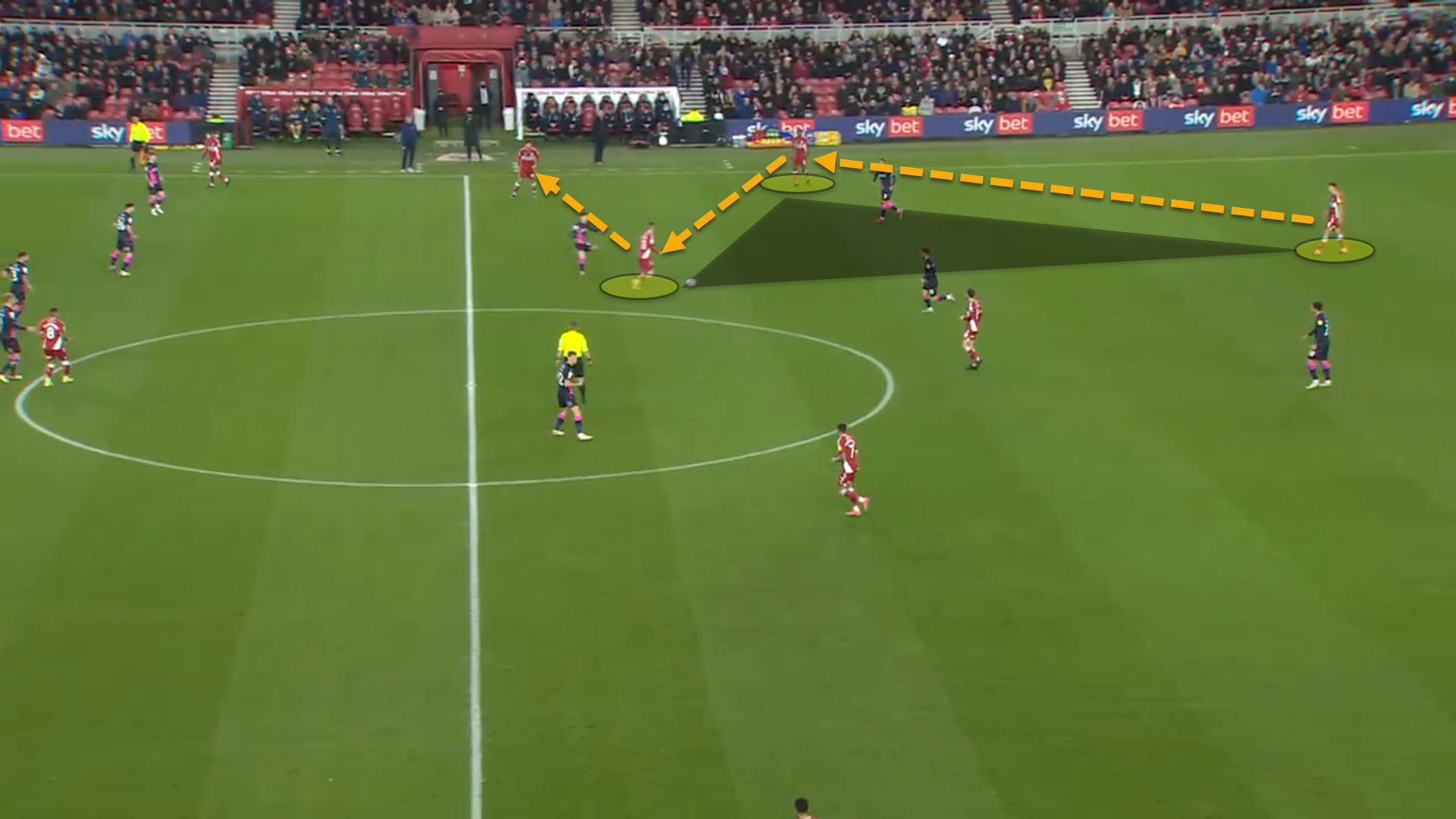 It seems simple. In fact, it is simple, but it’s absolutely effective for them, especially when Boro overload the flanks with passing options which allows for nice and easy progression up the pitch.

In the above image, this passing pattern can be seen. They play around the opposition’s press, move the ball inside to the nearest central midfielder which forces the opponent to come narrower, leaving more space out wide. The ball is then pushed to the sides once more, allowing the pass receptor to receive the ball in a plethora of space.

These wide patterns are a frequent method to Boro’s madness. Here is a map of the team’s most used progressive passes from a recent game against Blackpool in the league which shows their wide triangles being used really often to progress the ball. 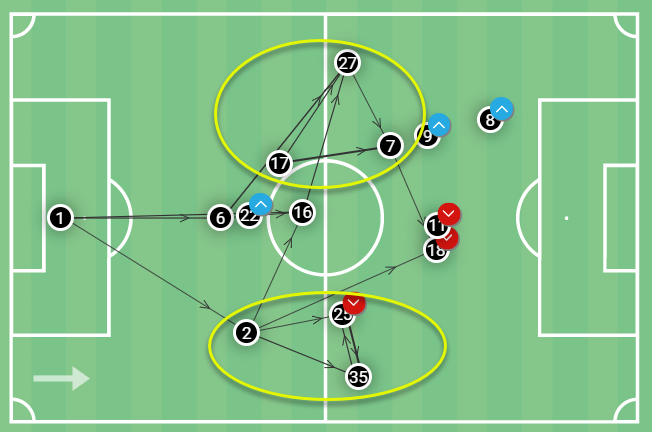 Again, the centre-backs are vital to this progressive play on the floor by initiating the attacks and creating the triangles while they are also tasked with playing the ball forward from deep through direct passes.

As already stated, long balls to the centre-forwards into the channels or for them to challenge aerially are vital to Boro’s play and so the centre-backs must constantly be trying to find the forward runners throughout the match. 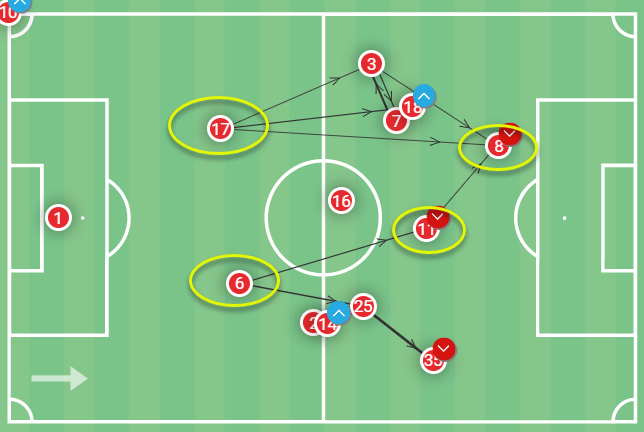 This data visualisation displays Middlesbrough’s forward passing map from another recent match at home to Nottingham Forest. Two of their most frequent forward passes were from the centre-backs to the two centre-forwards on the day.

This season, 15 percent of Boro’s passes have been long balls. This equates to roughly 52 long passes per 90. In contrast, against them, teams have played 50 so they are ‘out-long-balling’ their enemies and finding success at it too, winning 50 percent of their aerial duels.

At Sheffield United, Wilder instructed both of his centre-backs to push forward during attacks, although at different times. Only one could go per attack but both would have the license to get involved at the very least.

Only Dijksteel has been granted this license at the Riverside Stadium since the new manager has come in but the 25-year-old’s productivity in the final third still remains useful.

Wilder wants his players to put plenty of crosses into the box but the wide players need room to do this. To solve the problem, Dijksteel gets involved, creating overloads to find the free man and eventually play the ball into the penalty area. 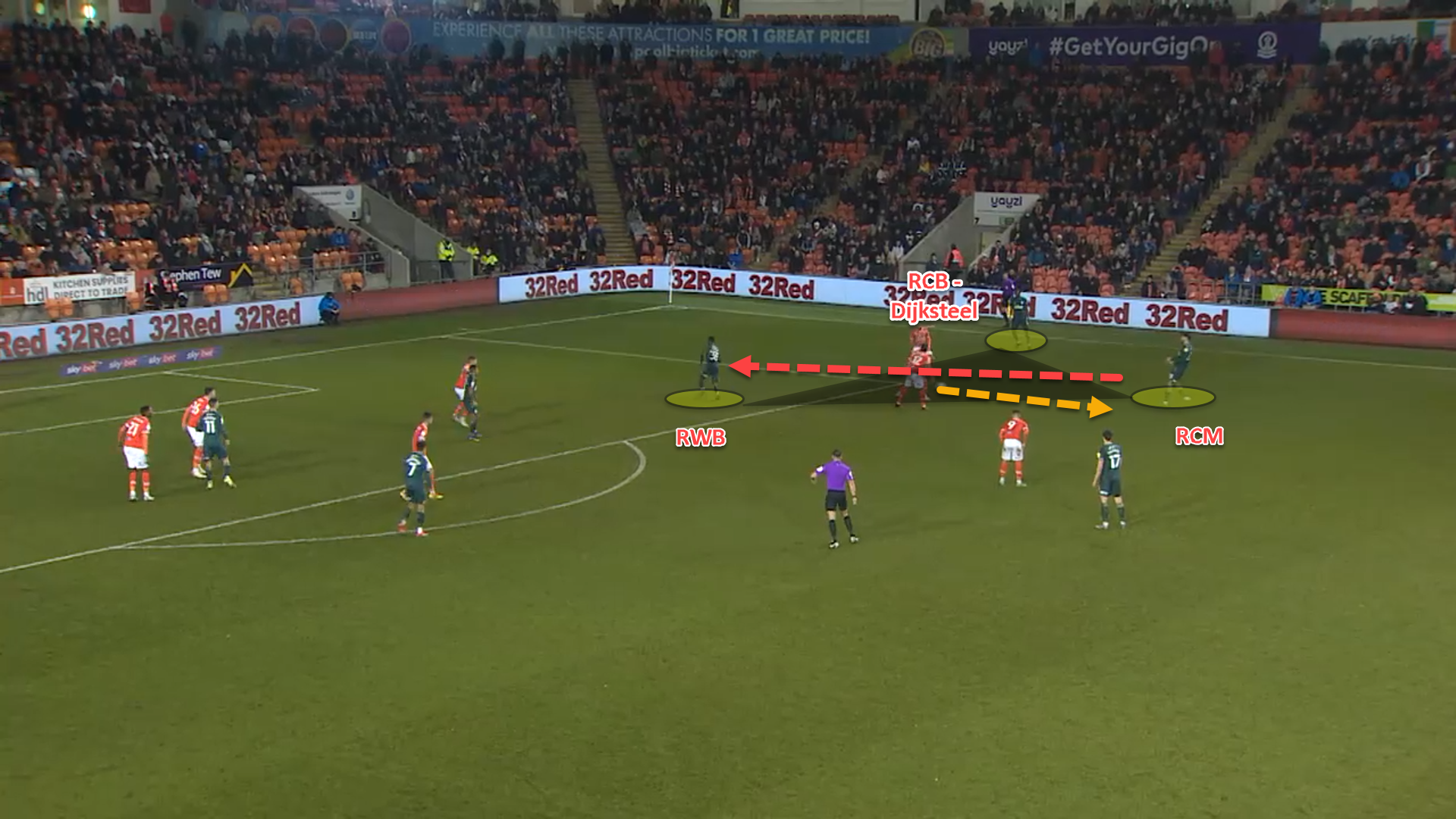 Here, Middlesbrough have created an overload on the right flank by pushing Dijksteel into the attacking third. This has allowed the right wingback, Isiah Jones, to drop into the halfspace and receive the ball from the central midfielder.

Dijksteel’s involvement has created dismarking in Blackpool’s low block, allowing a passing lane to open up to Jones who eventually receives the ball and crosses it to Andraž Šporar who tapped home. It was the involvement of the centre-back in the final third that made way for the goal.

Although the tactical term has become known as an ‘overlapping’ centre-back, it doesn’t necessarily mean that they always ‘overlap’. Sometimes the wingback will want to remain out wide and so Dijksteel is allowed to move into the halfspace also in order to occupy players during the overload. 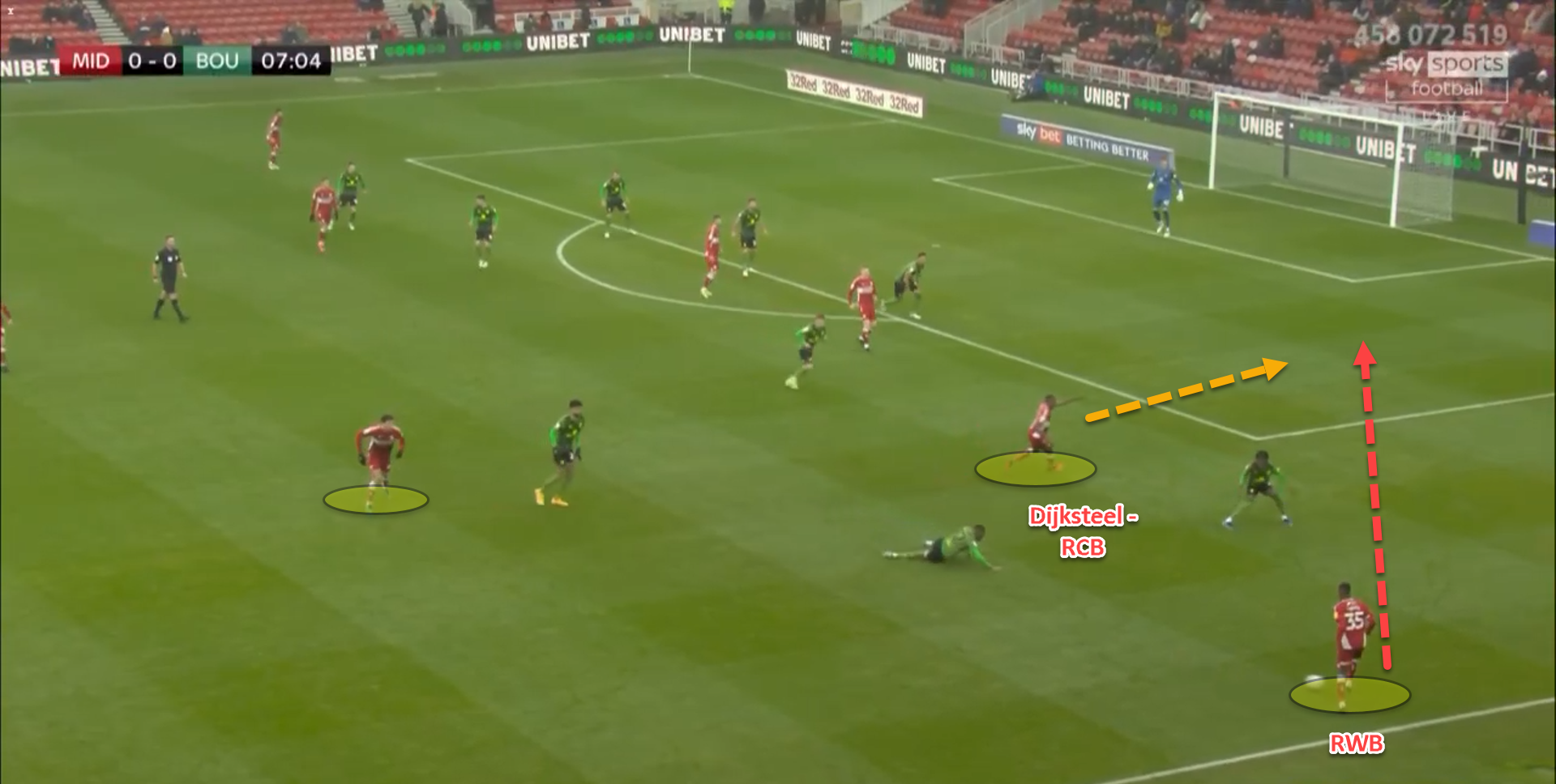 Dijksteel is underlapping here but is playing a vital role in helping his team to create chances. Wilder has used the Dutch player really well since his arrival. He is excellent going forward so it makes a lot of sense for Dijksteel to push forward instead of simply remaining back like a conventional centre-back.

Having a central defender in the final third also helps Boro with their counterpressing too as there is an extra man up there to try and prevent the opposition from being able to counterattack effectively, potentially even regaining the ball too. 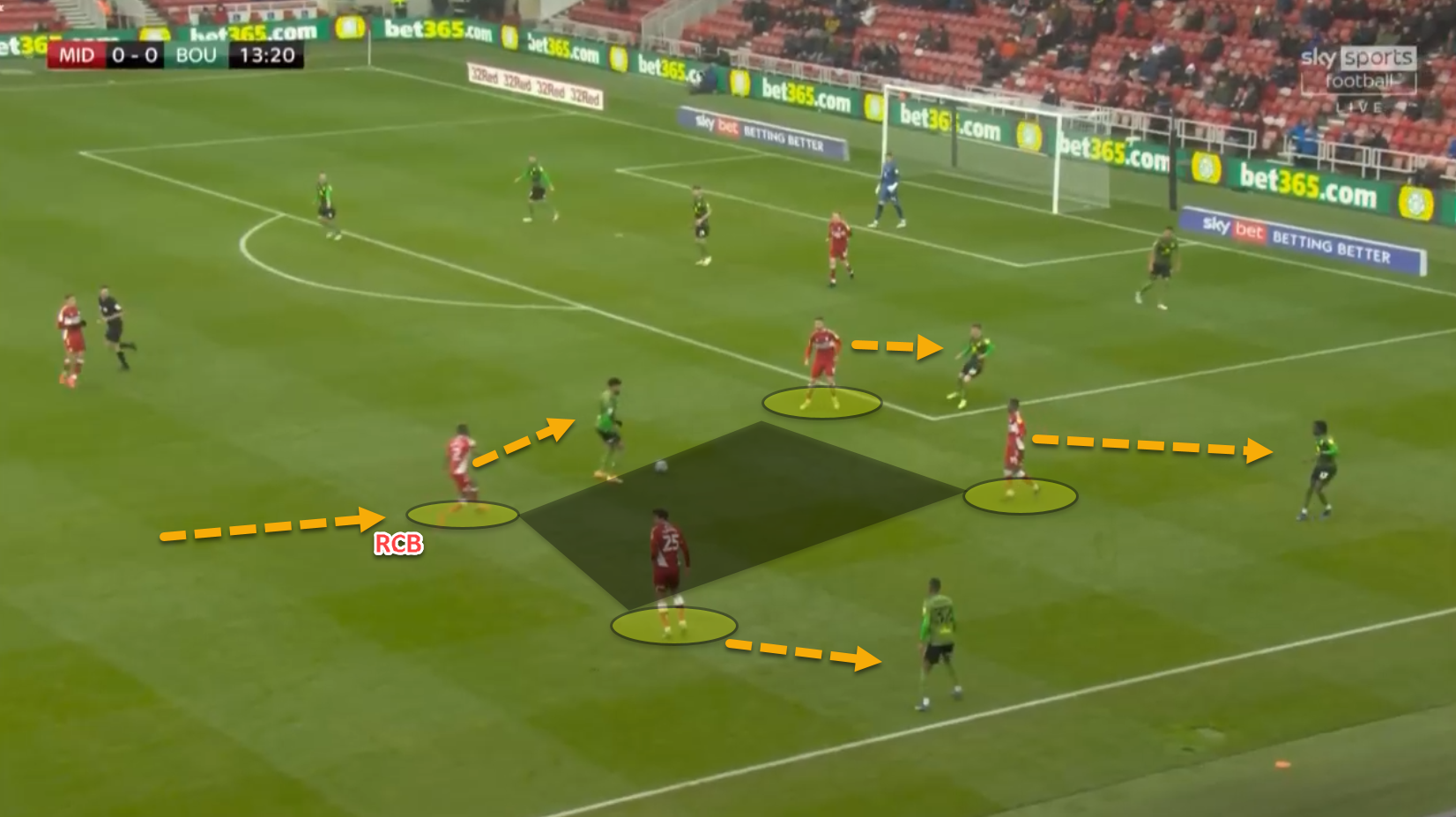 One of the greatest features that a back three provides to a team defensively in comparison to a back four is that centre-backs can be more aggressive between the lines and when closing down players in general.

There is an extra man at the back and so it’s not as costly for a central defender to leave his zone to mark a player as it would be in a two centre-back system.

Chelsea use this really efficiently under Thomas Tuchel and is one of the main reasons that the German coach was able to tactically dominate Pep Guardiola’s Manchester City three times in the 2020/21 campaign, including in the UEFA Champions League final. 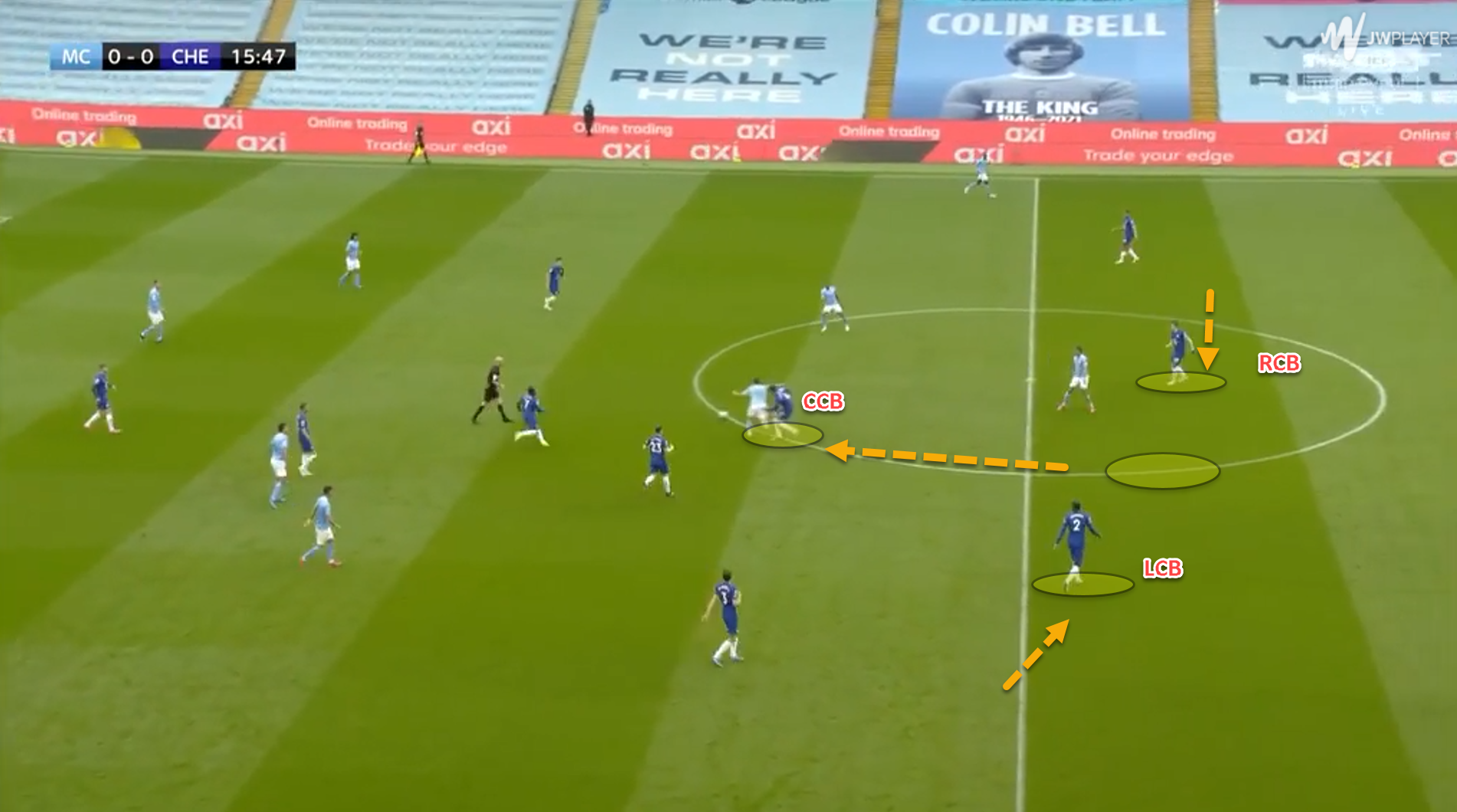 When one centre-back leaves the last line to aggressively pressurise an opponent on the ball, his two defensive partners simply push closer together to reduce the gap left.

Having the centre-backs playing aggressively when closing down players allows the midfielders to worry more about what’s in front of them as opposed to behind them which is preferable for any midfielder.

Middlesbrough are really aggressive in their approach, as instructed by Wilder, but the wide centre-backs perform their duties to perfection, often following their man into very deep areas of the pitch to ensure they can’t receive and turn with the ball. 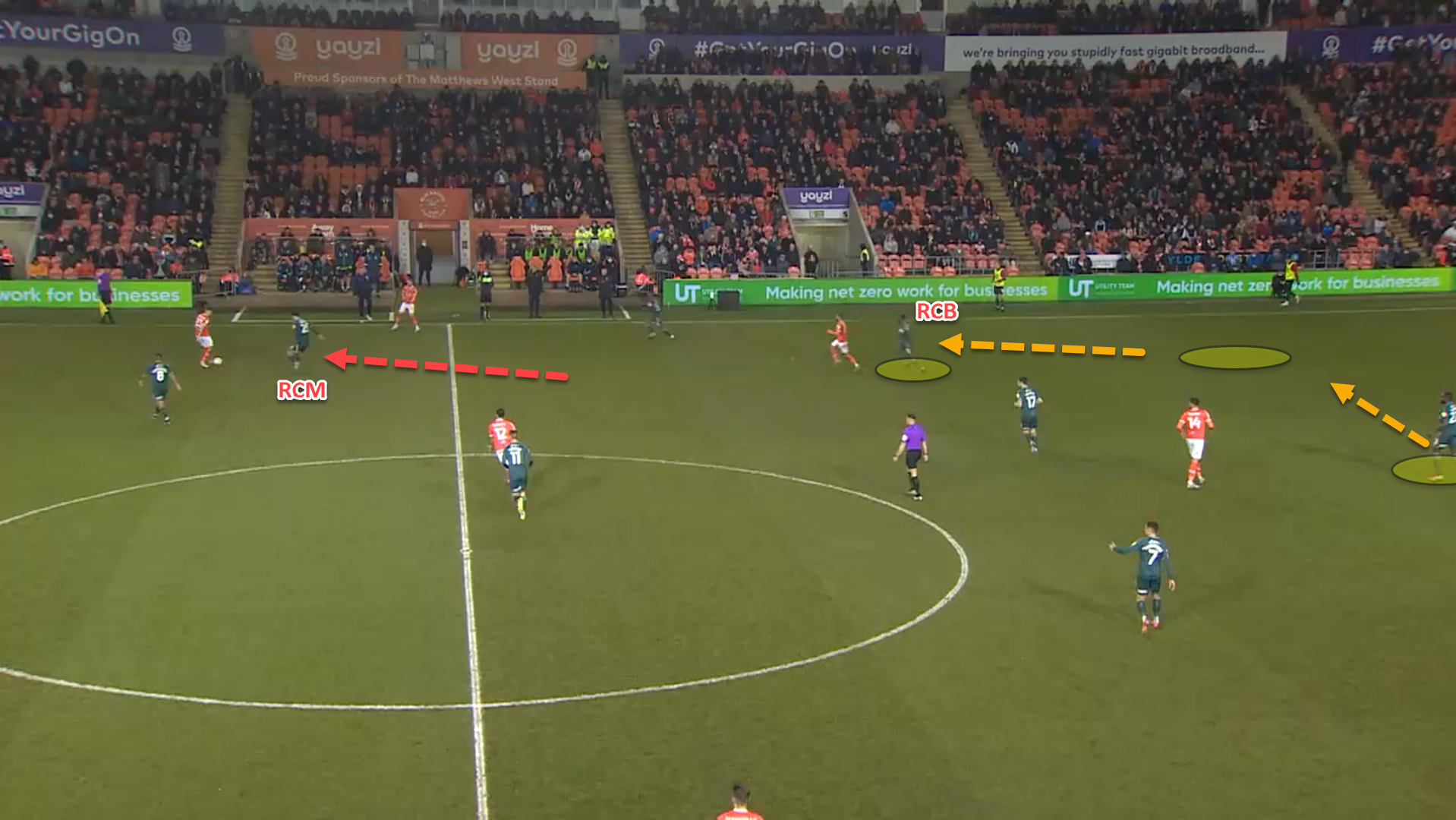 Here, Boro’s right central midfielder has left his occupied space to close down the ball-carrier. A Blackpool forward has dropped to receive but has been followed deep by Dijksteel so that he will have no time to take a touch, turn, and drive forward with the ball. In the meantime, the central centre-back, Bamba, comes across to close down the space.

The right central midfielder was able to leave his zone and apply pressure to the ball-carrier because he had faith that the right centre-back would deal with any passing options behind him.

The next example is a mirror image of the above scenario, only this time it is on the opposite side and Middlesbrough are applying pressure higher up the pitch: 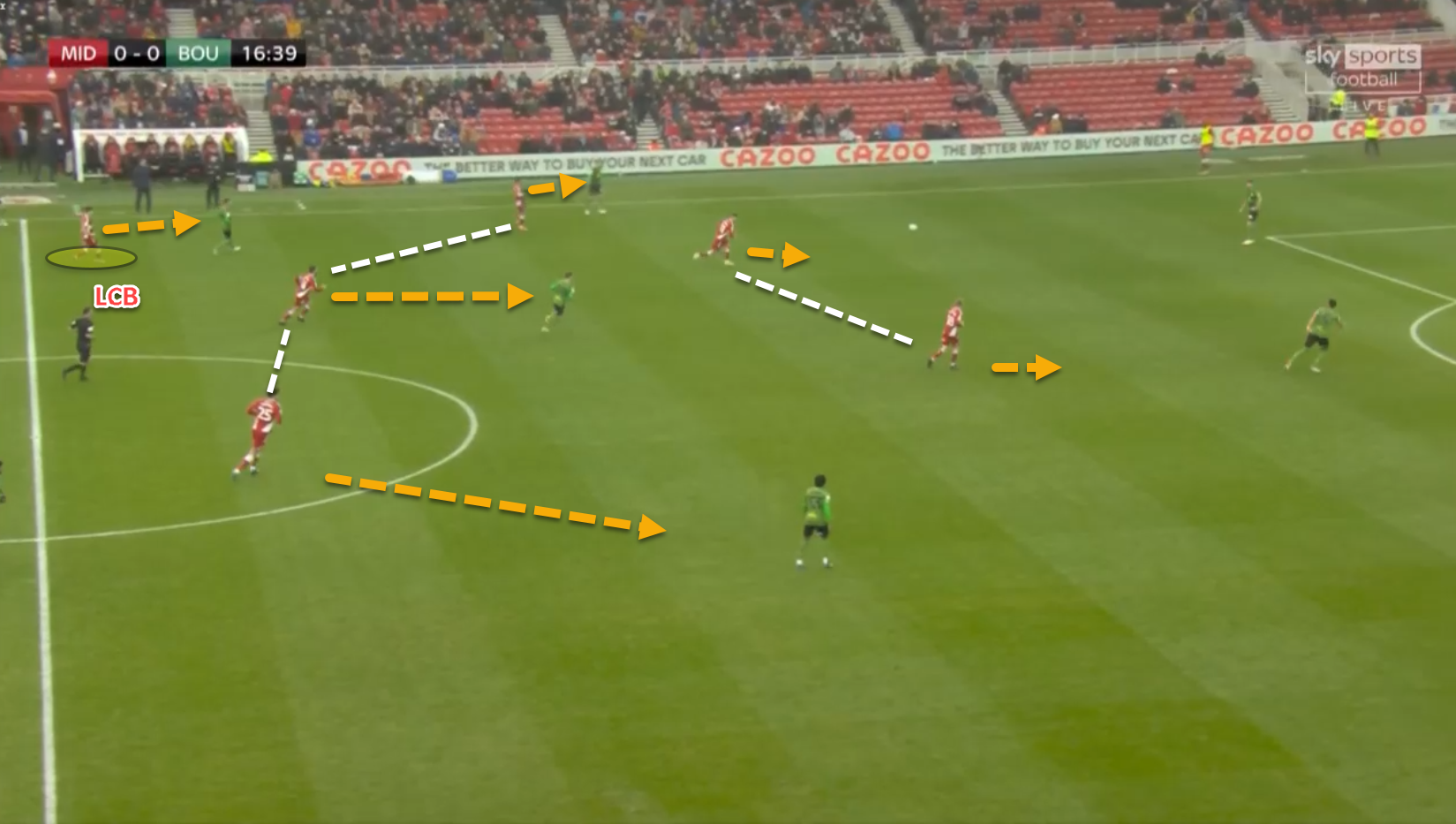 When all the players are communicating and cooperating perfectly, this is a wonderful way to defend in a block as it has made Middlesbrough extremely difficult to break down, hence why they have conceded just one goal in their previous five games.

Yet again, just as he did during his time at Bramall Lane, Wilder is proving himself to be one of England’s most underrated tacticians.

Middlesbrough are playing some really effective football in possession and are wonderfully well-drilled in the defensive phases. A squad that was rendered not good enough to fight for a play-off spot is now staking its claim to return to the top-flight for the first time in five years.

Once more, Wilder is using the resources available to him to their full capacity and is getting the best out of this team, with the centre-backs proving vital in their top-six quest. 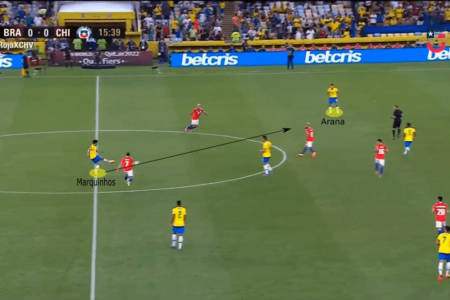 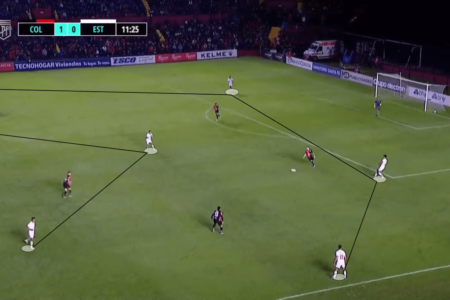 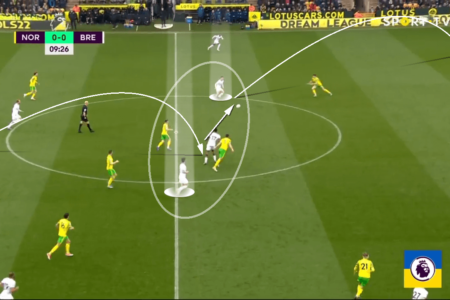