Jesper Karlsson 2021/22: A look into one of the Eredivisie’s top attacking talents- scout report

Jesper Karlsson is having another strong year in the Eredivisie with his club AZ Alkmaar. Karlsson arrived at AZ Alkmaar from Elfsborg in 2020 after a couple of strong seasons in the Allsvenskan where he caught the Dutch side’s attention. Karlsson has continued his progression and is now maintaining those performances and numbers in a stronger league. Karlsson has always been highly rated with Manchester United having tracked him intensely as a teenager however a move never materialised and he stayed in Sweden. Karlsson has received six caps for Sweden and is part of their impressive crop of younger players with the likes of Aleksander Isak and Dejan Kulusevski who pushed Spain all the way in the World cup Qualifying. If Karlsson continues both his performances and numbers then AZ Alkmaar will have a real fight on their hands to keep hold of the Swedish international, with the attention of the Eredivisie’s biggest clubs and the rest of Europe being drawn.

This scout report and tactical analysis sets out to analyse Jesper Karlsson’s game and some of the key attributes which have led to yet another impressive season and how they may help take Karlsson to the next level.

Like many modern attackers, Karlsson plays as an inverted winger/inside forward.  This means they play on the opposite side to their strongest foot, in this case, Karlsson plays on the left despite being right-footed. This is shown by Karlsson’s heat map which shows he spends most of his time on the wide left side. This role as an inverted inside forward suits Karlsson as it allows him to come inside onto his right foot, which we will cover in more detail in this analysis. It Has also allowed him to form a strong partnership with AZ Alkmaar captain Owen Wijndal, with the combination of overlapping or underlapping runs which makes Karlsson’s play even more effective and again this will be analyzed in more detail in the scout report. 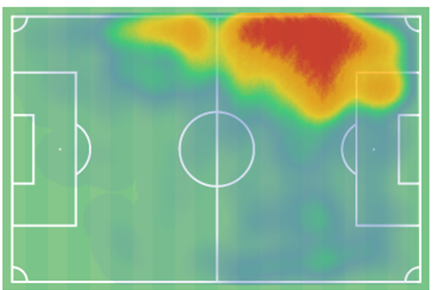 Jesper Karlsson has been recording some strong attacking metrics this season in addition to strong numbers last season. Last season Karlsson scored 11 goals and recorded 9 assists in the Eredivisie. So far this season Karlsson has managed 8 goals and 6 assists in the league and if he continues his form he will beat last year’s impressive haul. Below is a chart of the goals and assists by Eredivisie’s top attackers, in all competitions. It shows that Karlsson is amongst the leagues best for both goals and assists. We must also contextualize, that Ajax’s Sebastien Haller, has scored an impressive 1o goal’s in the UEFA Champions League. 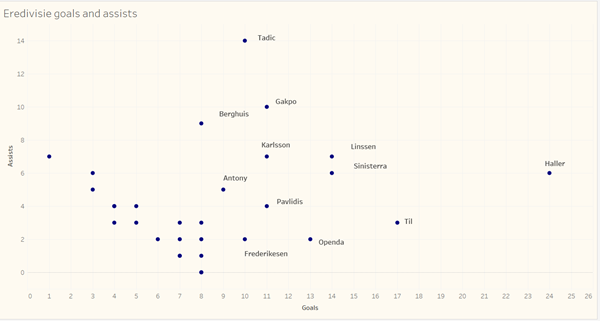 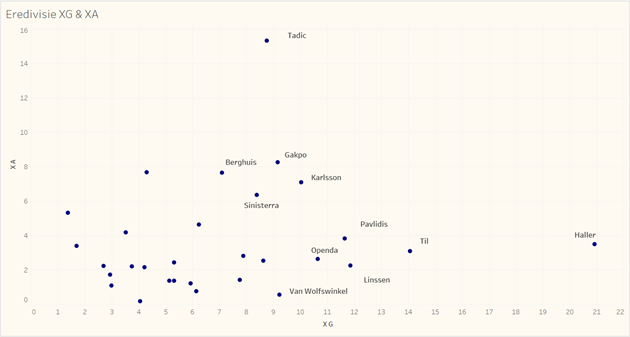 Cutting inside and shooting

As I alluded to earlier in the report, Karlsson loves to cut inside and use his right foot, this is a key feature of the many inverted forwards. It is often why they are playing there as it can open more options in the attacking phases. Firstly, it encourages the player to drift inside which open up space for an overlapping full-back, it also allows for the play to make crosses and play reverses passes inside to attackers.

With Karlsson it also allows him to come inside and shoot. This can be seen when looking at the shot map of Karlsson below. You can see the majority of his shots and goals in fact come from the half-space which an inverted forward would drift into. 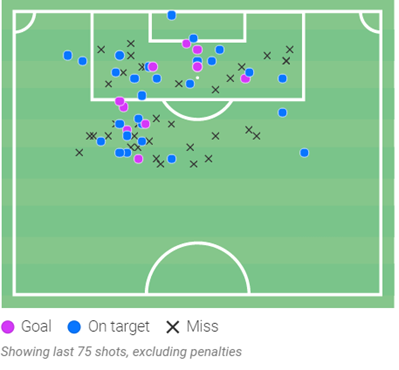 This can also be demonstrated with examples as shown below. In this case, Karlsson has just been played the ball by Wijndal, he is in a 1 v 1 situation with the Fortuna right back. Karlsson is going to carry the ball as close to the goal as he possibly can before the defender engages him.

When he carries it closer to the goal the defender will eventually engage Karlsson, at this point he knocks the ball inside. The importance of the run from Wijndal cannot be understated, him making the underlapping run means that the Fortuna number 8 follows him into the box and creates the highlighted space shown below.

As Karlsson drives into the highlighted space he has a few options, he can play the ball to Wijndal but would be a risky pass, he can also play the ball into Pavlidis’s feet, but he opts to shoot for the bottom corner and subsequently gives AZ Alkmaar the lead with a great strike.

Coming inside and crossing

We have looked at Karlsson cutting inside and shooting but this isn’t the only feature of Karlsson’s game, he also is very adept at cutting inside and crossing the ball. Karlsson has a brilliant right foot, his ability to strike and place the ball is spectacular and is one of the strongest attributes in his locker.  In this example Karlsson receives the ball wide on the left-hand side, he decides to come infield due to the lack of space outside. 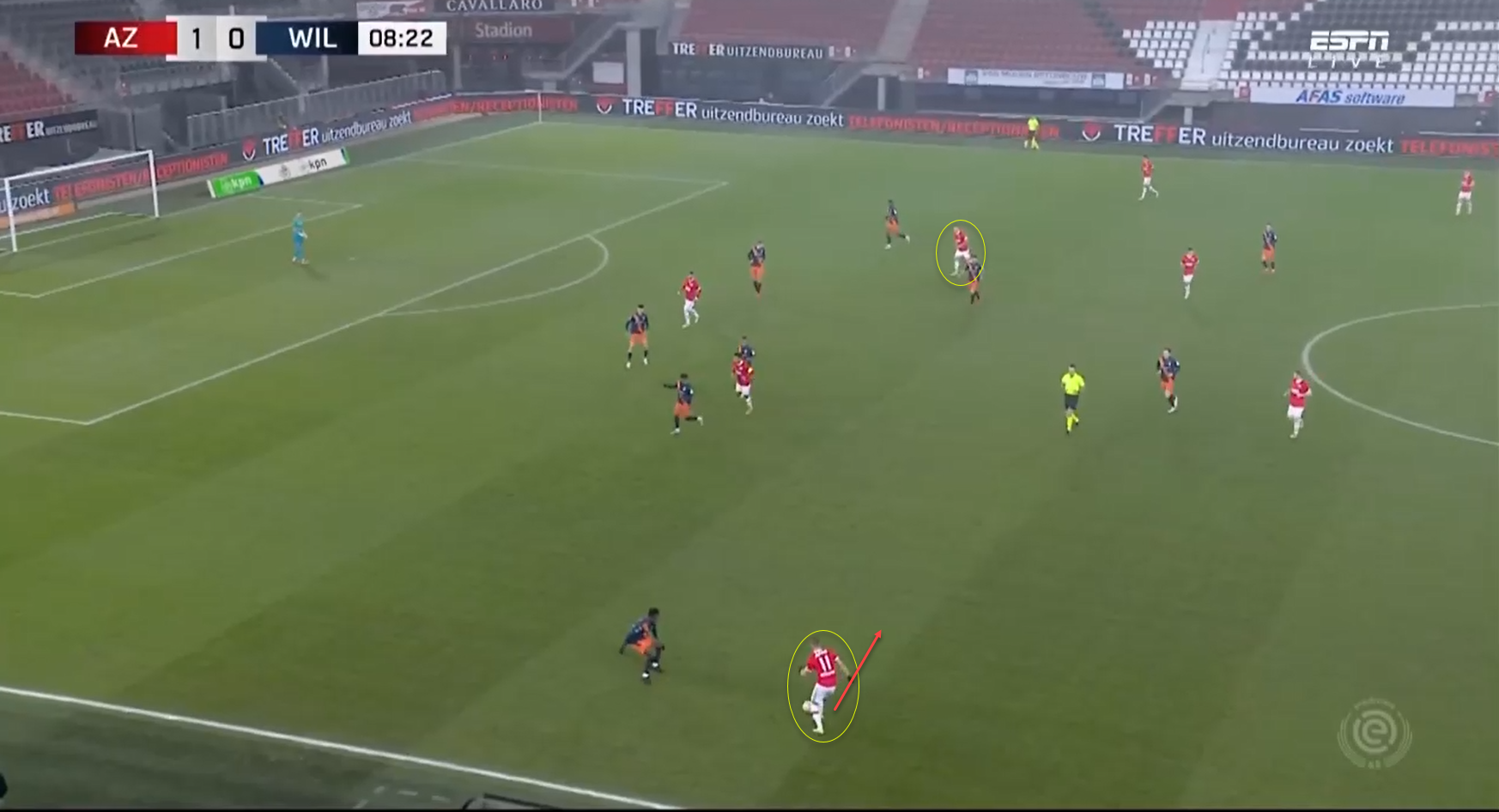 As he comes inside he notices Dani De Wit, circled infield in the above picture. De Wit starts making a run between the Willem centre-back and full back. Karlsson plays a brilliant pass drilled over the Willem defensive line and fins the on running De Wit who chests the ball and fires it into the back of the net. The diagram probably doesn’t do this pass justice as it’s so excellently timed and executed, you should watch it for yourself.

This is a piece of brilliance from Karlsson, and the next example gives the previous a run for its money in terms of excellence. Again, Karlsson has received the ball wide on the left-hand side. CFR Cluj has made a vital mistake in allowing such space inside for Karlsson to step into and work with. Again we see the underlapping run from Wijndal. 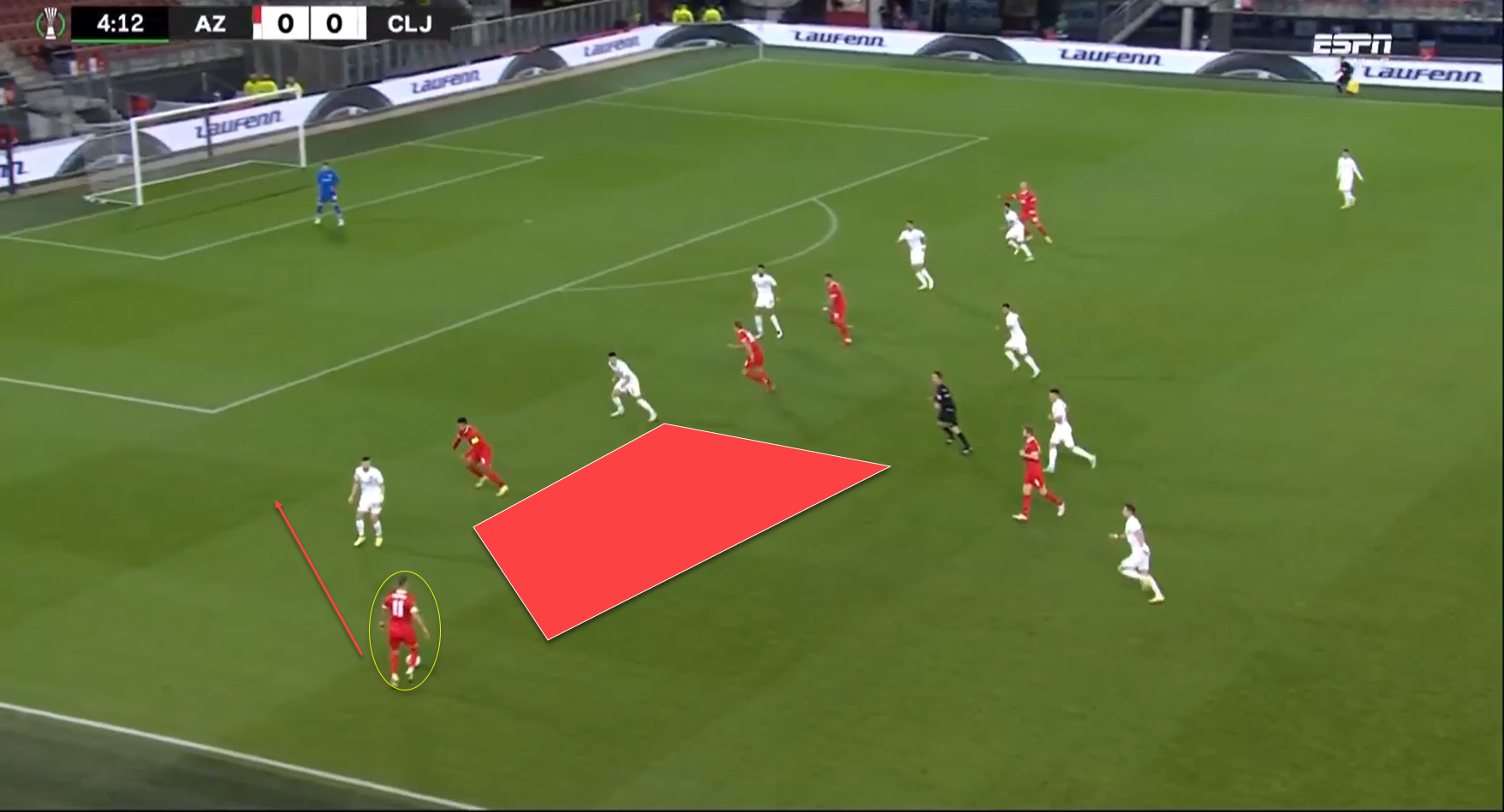 Karlsson comes infield slightly before setting himself up and playing a brilliant cross. He manages to find Gudmundsson who chests the ball down before coolly converting.

Yet another brilliant cross from Karlsson and this is just a few of many from the Swedish international. The ability to play these balls with such accuracy and execution makes him so effective and dangerous anywhere in the opposition half.

I don’t think you can analyse Jesper Karlsson without addressing the partnership with AZ Alkmaar captain and left-back Owen Wijndal. Hopefully, so far you can see that Wijndal plays a significant role in Karlsson’s plays due to his attacking play and willingness to make overlapping or underlapping runs. This allows for space to open up for Karlsson as already shown in the first example of the report, he also creates a passing option for Karlsson which can be used to create goal-scoring opportunities. Over the previous two seasons, their partnership has grown and developed and is one of the critical tactics in AZ Alkmaar’s attacking play. The majority of the time Karlsson likes to keep his width and allow for Wjndal to make underlapping runs into spaces between full-backs and centre-backs. This can be seen pretty much every time AZ Alkmaar play. This example shows the benefits of this partnership perfectly.  Wijndal has the ball and is going to play a simple pass to Karlsson, once he is played his pass he is going to make a run into the highlighted space between the fullback and right-sided centre-back.

By making this run it engages the CFR Cluj number 8 who then has to be deeper than he would want to cover the Wijndal run this then creates a little pocket of space for Karlsson to drift into.

When in the space Karlsson now has an extra option, which is to pass to Wijndal in addition to crossing the ball or shooting. He opts to play a pass behind the Cluj backline into the space for Wijndal to run onto. Wijndal recovers the ball and plays a dangerous cross which is cleared. Although this may seem simple it has such a significant impact on Karlsson’s play and allows for him to maximise his game.

This partnership has hopefully been present throughout the analysis and the importance of Wijndal’s play cannot be understated.

Jesper Karlsson is a highly talented footballer who if he carries on will establish himself as one of Europe’s best due to his tactical understanding and on-ball quality. Both his numbers and performances back this up, with him scoring and creating assists consistently. If Karlsson is going to maximise his potential then continuing to play with a left-back similar to or with Wijndal will allow him to unlock his true potential. There are many different and excellent aspects to Karlsson’s game some of which we haven’t been able to touch upon, like Karlsson’s dead-ball delivery from set-pieces. If he continues his excellent form, I don’t imagine he will be at AZ Alkmaar for much longer with either one of the Eredivisie’s top teams or he will venture out to one of Europe’s biggest sides.