Olivier Pantaloni has become quite a legend at AC Ajaccio in France over the past three decades. The Frenchman developed in the team’s academy from 1982-1983 and subsequently played as a striker for the side’s first-team from 1994-2000.

Nonetheless, what has been more impressive is his tenure as manager. Pantaloni has been in the dugout at the Stade François Coty on three separate occasions since 2004, with his first stint coming as the interim boss for a few months.

Pantaloni was in charge of the French team on a permanent basis from 2009-2012, helping Ajaccio to promotion to Ligue 1 before staving off relegation. He stepped down for two years but was back in charge in 2014 and has been there ever since.

From 2014/15 to 2020/21, under Pantaloni in Ligue 2, Ajaccio finished seventeenth thrice, once in thirteenth and eleventh position, and third twice but the 55-year-old never managed to get the Bears to the top-flight again.

However, this season, Ajaccio are top of Ligue 2. Incredibly, in just 19 games, the team have scored merely 20 goals but the reason they are so high up the table is because of their defensive record, conceding just 8 in 19 matches, the best record in France’s top-two tiers.

This article will be a tactical analysis of AC Ajaccio in the form of a team scout report. It will be an analysis of the team’s defensive tactics, looking at why they have conceded so few goals in the league.

Pantaloni has been very strict with his utilisation of the conventional 4-4-2 system this season with Ajaccio. L’ours have deployed this formation in 88 percent of their matches with little to no flexibility from the manager in this regard.

The 4-4-1-1 is the only other eleven-man formation used by Ajaccio in the 2021/22 campaign, but this simply occurs when one striker drops back to man-mark the opposition’s single-pivot. 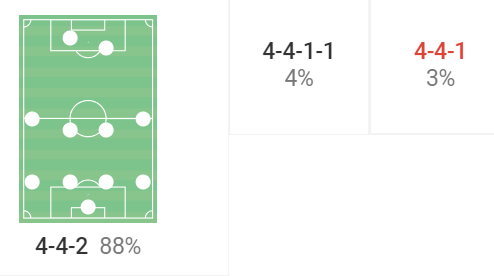 Of course, gone are the days when teams would play 4-4-2 in possession so Ajaccio’s shape will change when they have the ball but out of possession, it is very much so a 4-4-2, one which remains the same in a high, medium and low-level defensive block.

The 4-4-2 gives perfect spatial coverage on a football pitch and allows a team to defend really well in both the wide and central areas. Ajaccio’s 4-4-2 looks utterly unbreakable at times which will be analysed in further detail.

For the most part, Ajaccio have faced teams playing the 4-2-3-1 this season. Given the nature of how the 4-4-2, the 4-2-3-1 allows teams in possession to have three players between the lines when the wingers invert alongside the number ’10’, creating numerical superiority in the midfield.

This system has been used against them in one-third of their matches with the 4-1-4-1 in second.

Staying compact between the lines in their 4-4-2 and keeping no more than 25 metres between the last defender and first forward, as Arrigo Sacchi would advocate, is of vital importance to their great record. Again, this will all be analysed in the proceeding sections.

Choosing when to press high

This is merely a contestable school of thought, but Ajaccio play quite a lot like Ralf Rangnick’s teams, as seen by Manchester United over the past month and RB Leipzig when the German was in charge.

Like a Rangnick team, and given their wonderful defensive record, many would expect Ajaccio to press extremely high, but they don’t. They press when the situation arises but are more than happy to sit off in a compact medium-block and wait for the opposition to reach their line of engagement.

This line of engagement is generally when the opponent moves into the middle third of the pitch with a settled positional attack. 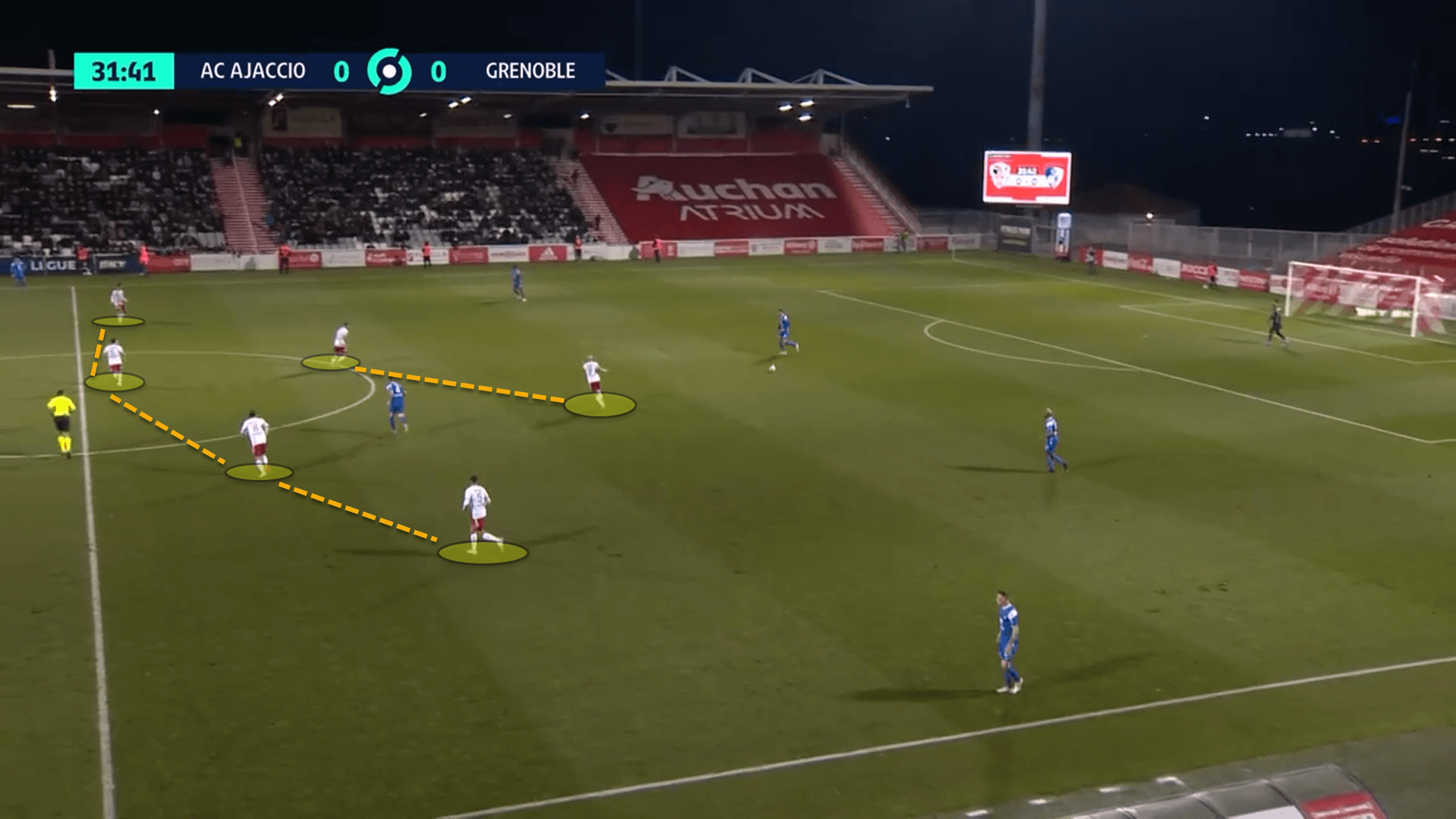 The Ligue 2 leaders are averaging just 9.3 ball recoveries in the final third per 90. Just because Ajaccio have a tendency to sit in a compact medium-block instead of pressing high, does not mean the team do not press high in certain situations.

The main circumstance when Pantaloni’s side put pressure on the opposition inside their own third is when the team in possession is passing out from the back.

Even in a high block, Ajaccio’s centre-forwards do not put pressure on the opposition’s central defenders. Instead, the first line of pressure, sit off and cut off the passing lanes into the midfielders who are showing for the ball, forcing the centre-backs to play out wide. 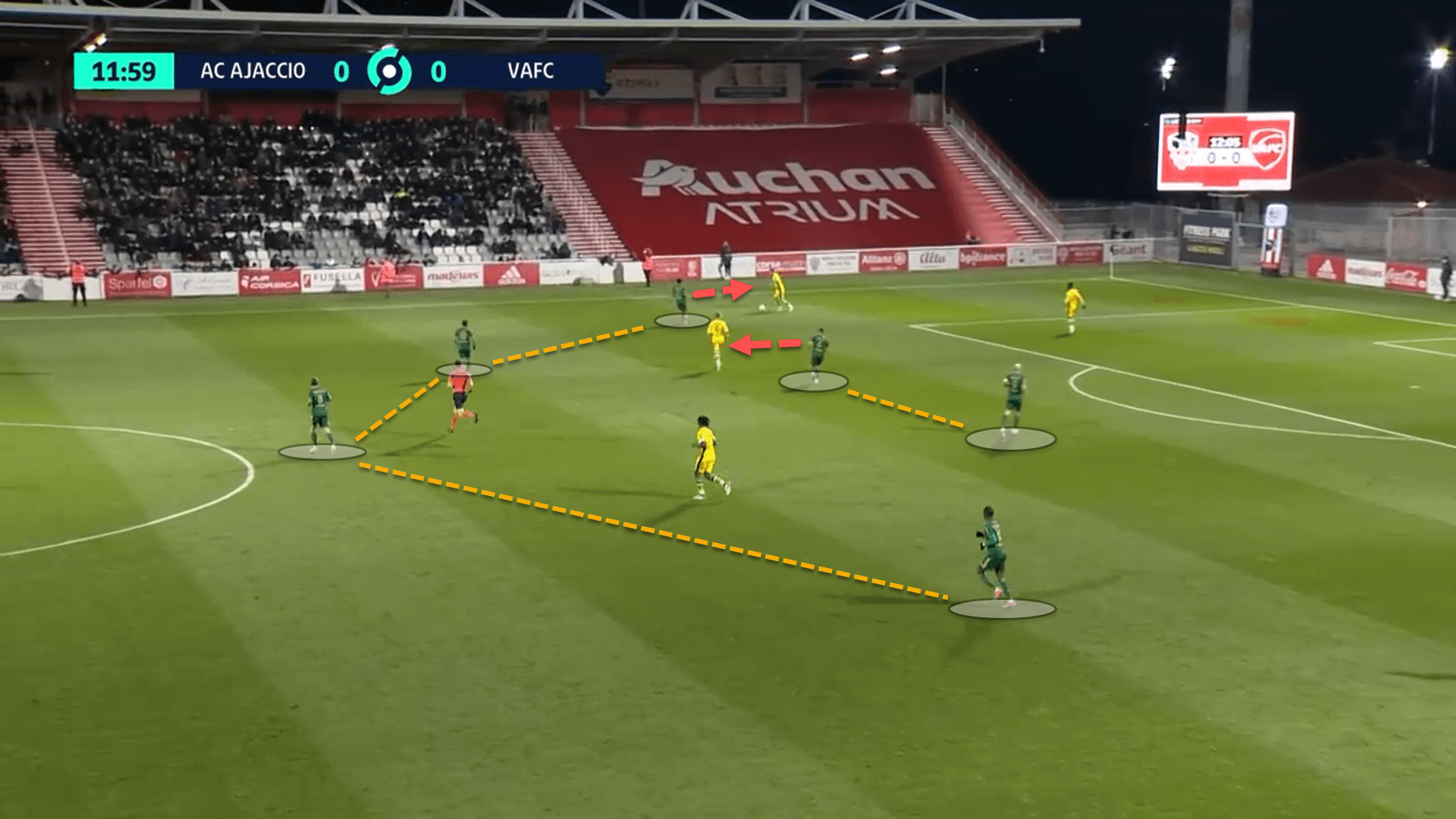 In this high press, it is generally just the wingers who press the fullbacks, shaping their pressure to force the ball-carrier down the touchline where they can hopefully regain possession.

This is a rather basic pressing trap, but it certainly works especially in a division such as Ligue 2. While still displaying a lot of quality, most players in the second tier would be less comfortable taking risks while playing out from the back by trying to split the opposition’s lines.

Playing down the line is a simplistic, yet effective way of moving the ball up the pitch without having to go long but it can also be easily defended against providing the fullback can win his defensive duel against the winger. 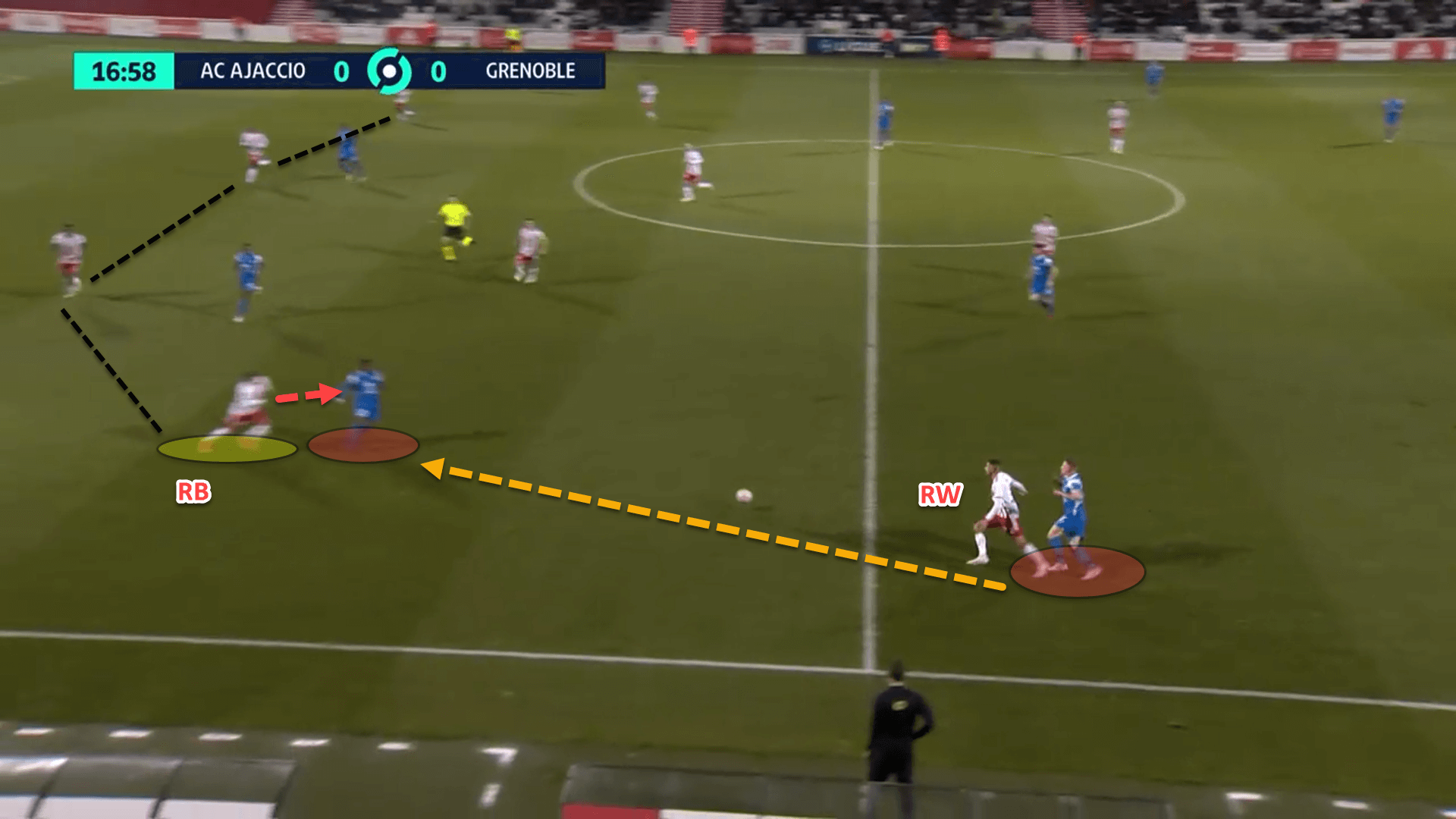 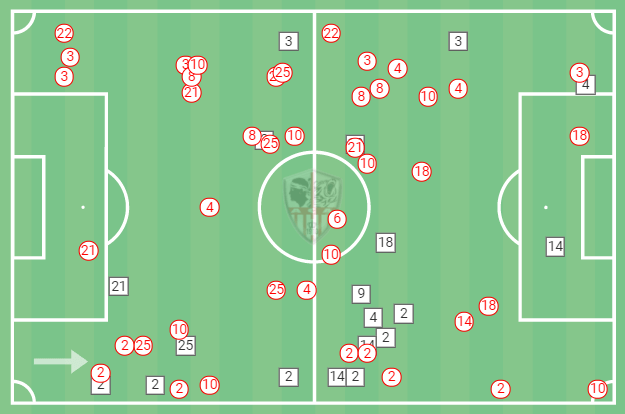 The data visualisation above shows all 63 of Ajaccio’s defensive duels from a recent goalless draw with Valenciennes. Exactly 33 percent of these defensive duels were from the fullbacks (numbers 2 and 3).

Aggressive between the lines

When a team is defending in a zonal and compact block, one of the key elements to ensuring that their block is secure and impenetrable is by preventing passing between the lines.

This is done by forcing the opposition wide and blocking off access to any central passing lanes. The players must constantly be working to close off options and put pressure on ball-carriers for this to work. 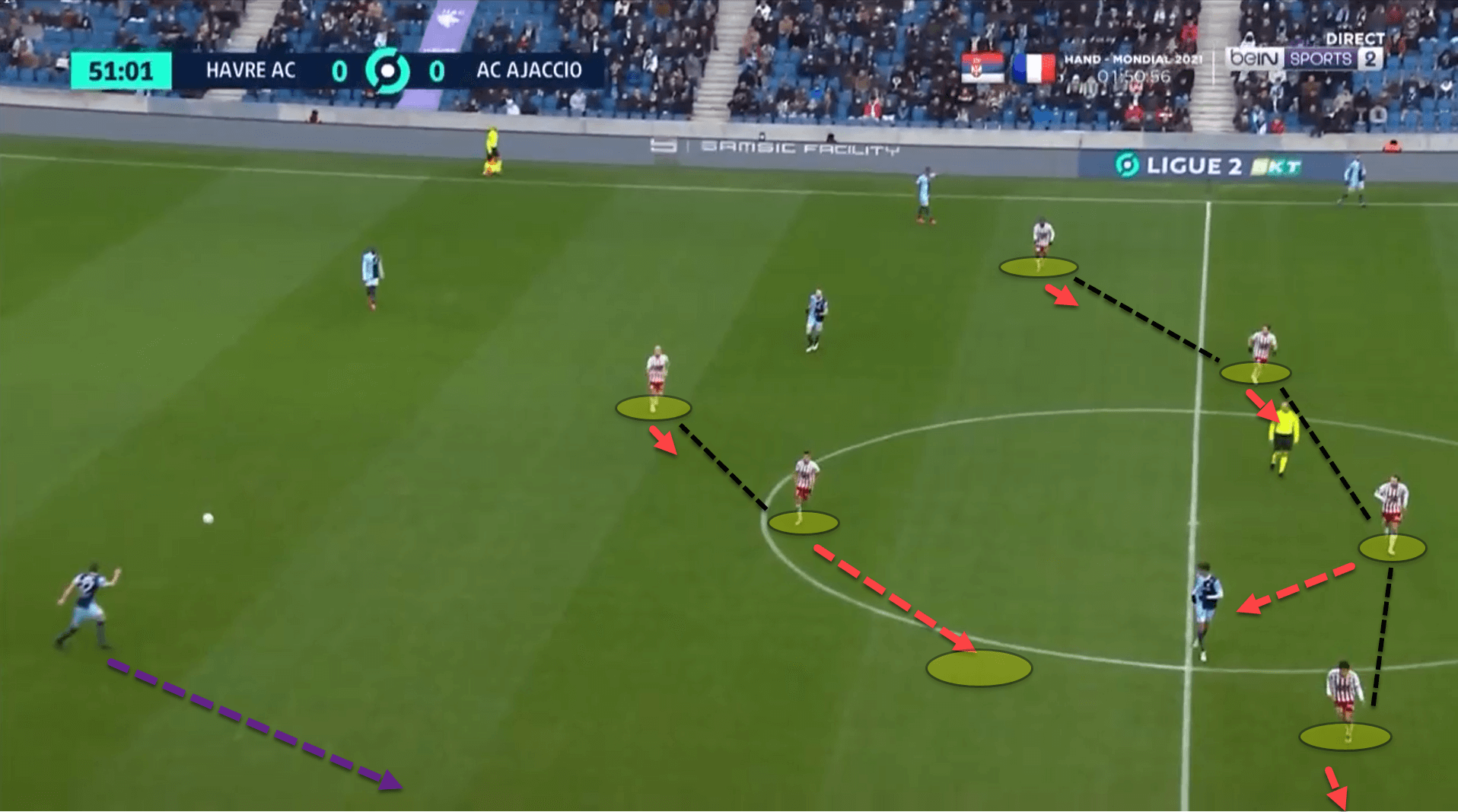 In this instance, Le Havre have switched the ball from the left flank to their right centre-back, but Ajaccio have managed to close off all the central passing options which forces the player on the ball to move it out wide once more.

By forcing the attacking side down the flanks, Ajaccio can use the touchline as a proverbial ‘twelfth-man’ when defending as they are essentially making the opponent play in a much tighter space with little room, hence why most pressing traps occur out wide. Again, the fullbacks are vital here in regaining possession due to their competency in defensive duels.

At times though, the defensive block will fail, and the opposition will be able to play through Ajaccio’s lines, reaching the space between the backline and midfield line. This tends to arise when the block is not as narrow as it should be.

When these situations occur, the centre-backs are tasked with closing down the ball-receivers before they can turn on the ball and cause damage. 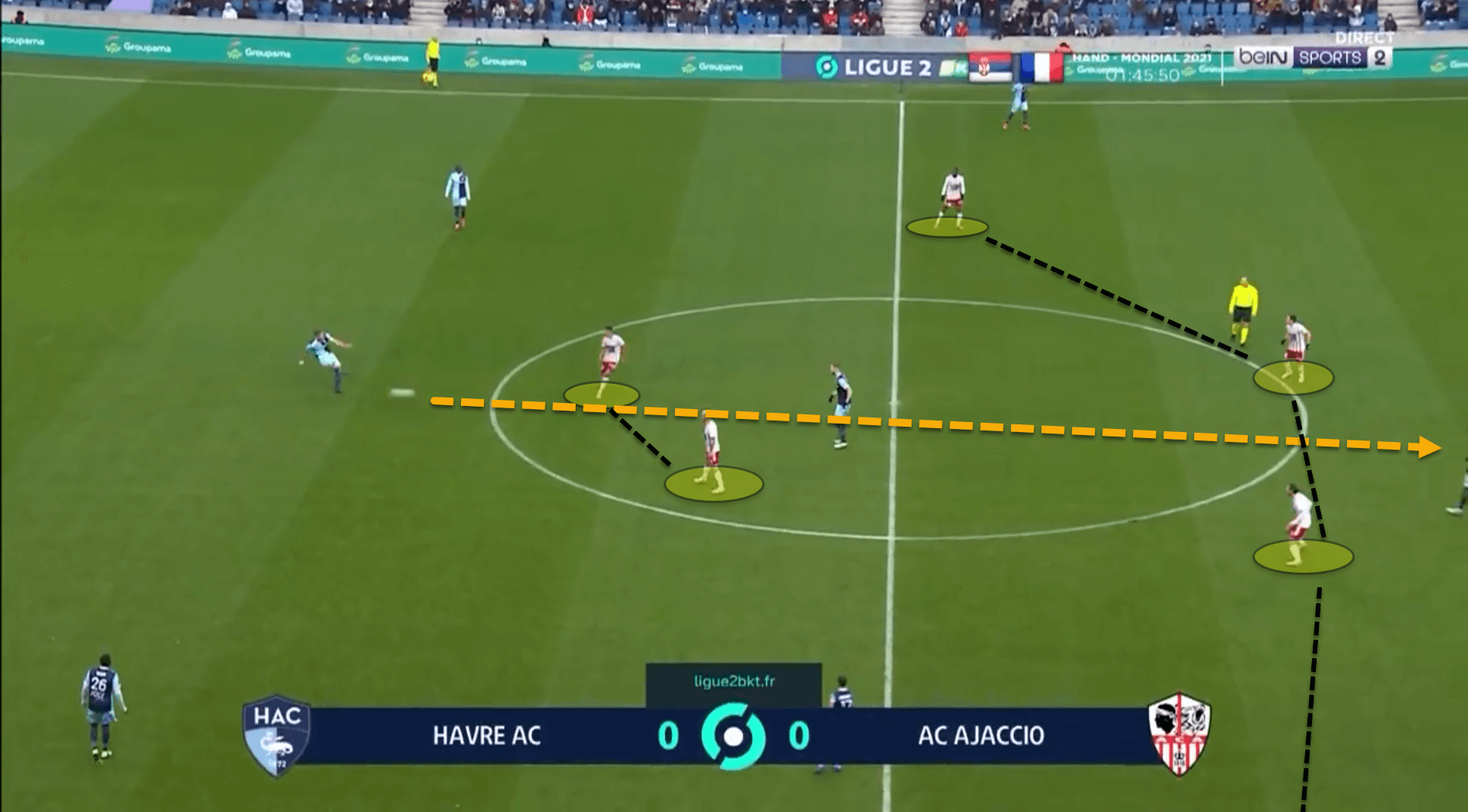 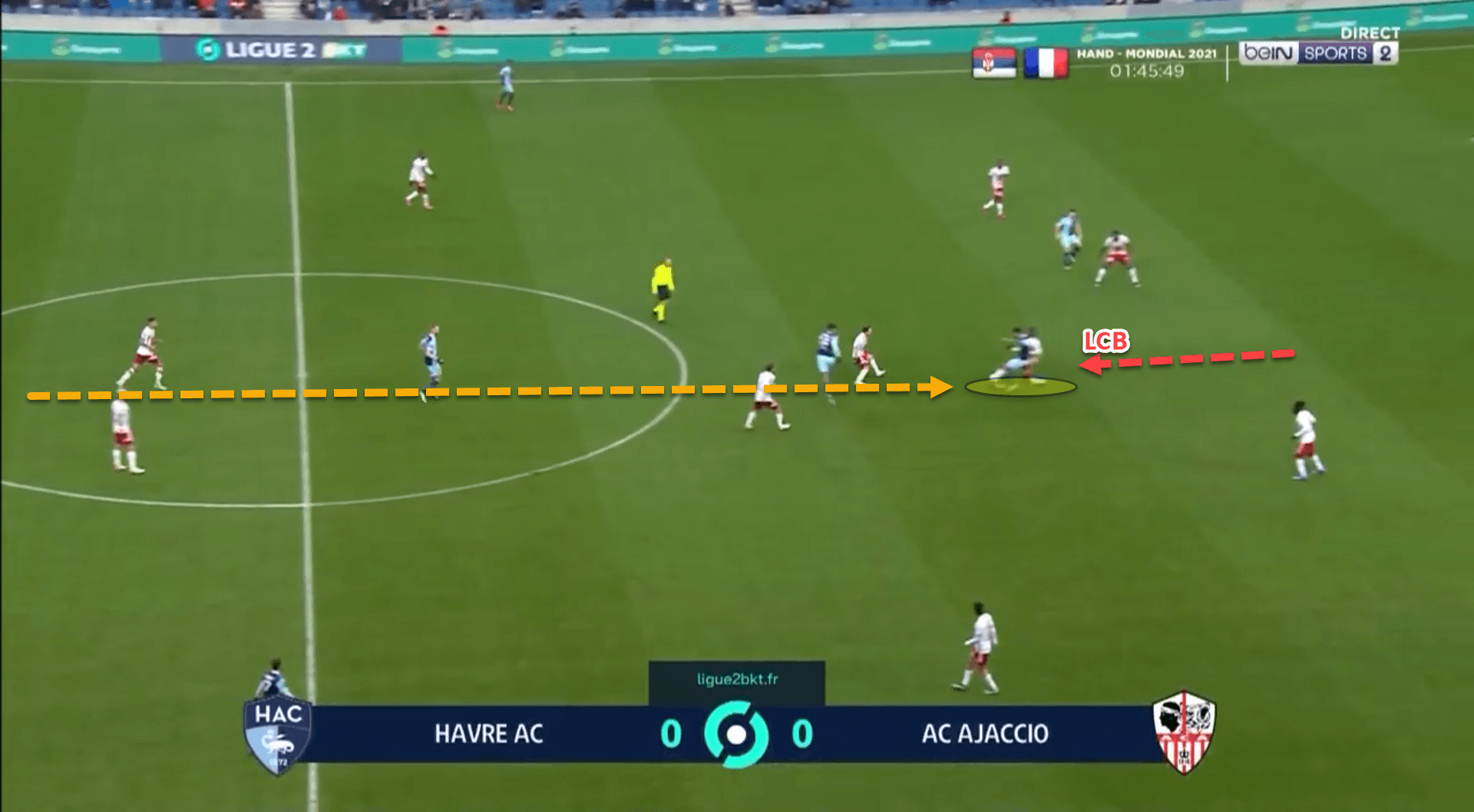 Here, Ajaccio’s midfield line was far too wide which allowed the Le Havre defender to play a double line-splitting pass through to the centre-forward between the lines. However, the left centre-back met him with an aggressive tackle before he could turn on the ball, regaining possession and preventing any danger from occurring.

This can only happen once the lines of a defending team are close together vertically. Referring back to a defensive principle of Arrigo Sacchi from earlier in this analysis, the distance between the first defender and last forward should be no more than 25 metres at one time.

Pantaloni has installed this very principle into his side, and it allows them to always have recovery options to prevent danger even when the opposition break through the defensive set-up.

When analysing a team’s defensive principles, it is important to note how the side sets up in possession. It seems rather peculiar but how a team is set up on the attack has a massive impact on their ability to defend transitions.

This is called having a good rest defence and can be found in all of the top sides in the world including Liverpool, Chelsea and Manchester City, predominantly sides that like to counterpress quickly to regain possession once the ball is lost.

Ajaccio’s rest defence is quite airtight as Pantaloni likes his side to create wide overloads in possession. The French outfit have great wide players but playing on the flanks with a numerical overload makes it easier for the team to counterpress efficiently with numbers to win the ball back. 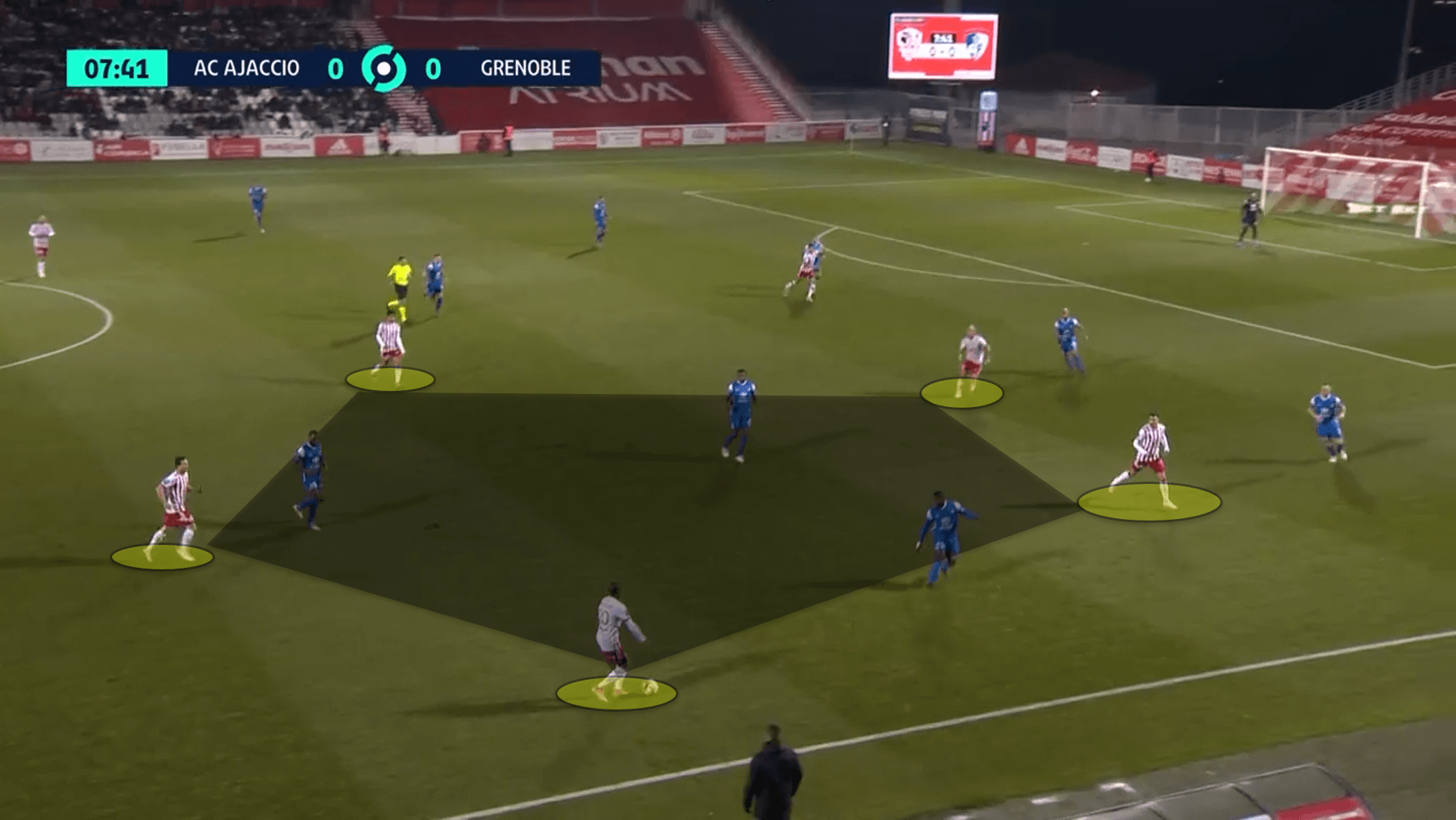 The example above was captured from a recent game against Grenoble Foot. Ajaccio were consistently playing down the sides with numerical overloads, trying to break through the opposition’s defensive block and get crosses into the box.

However, when they lost the ball, their counterpressing was excellent on the flanks as they could use the touchline as an extra man yet again and force a turnover of possession with the bodies they had over from the attacking phase. 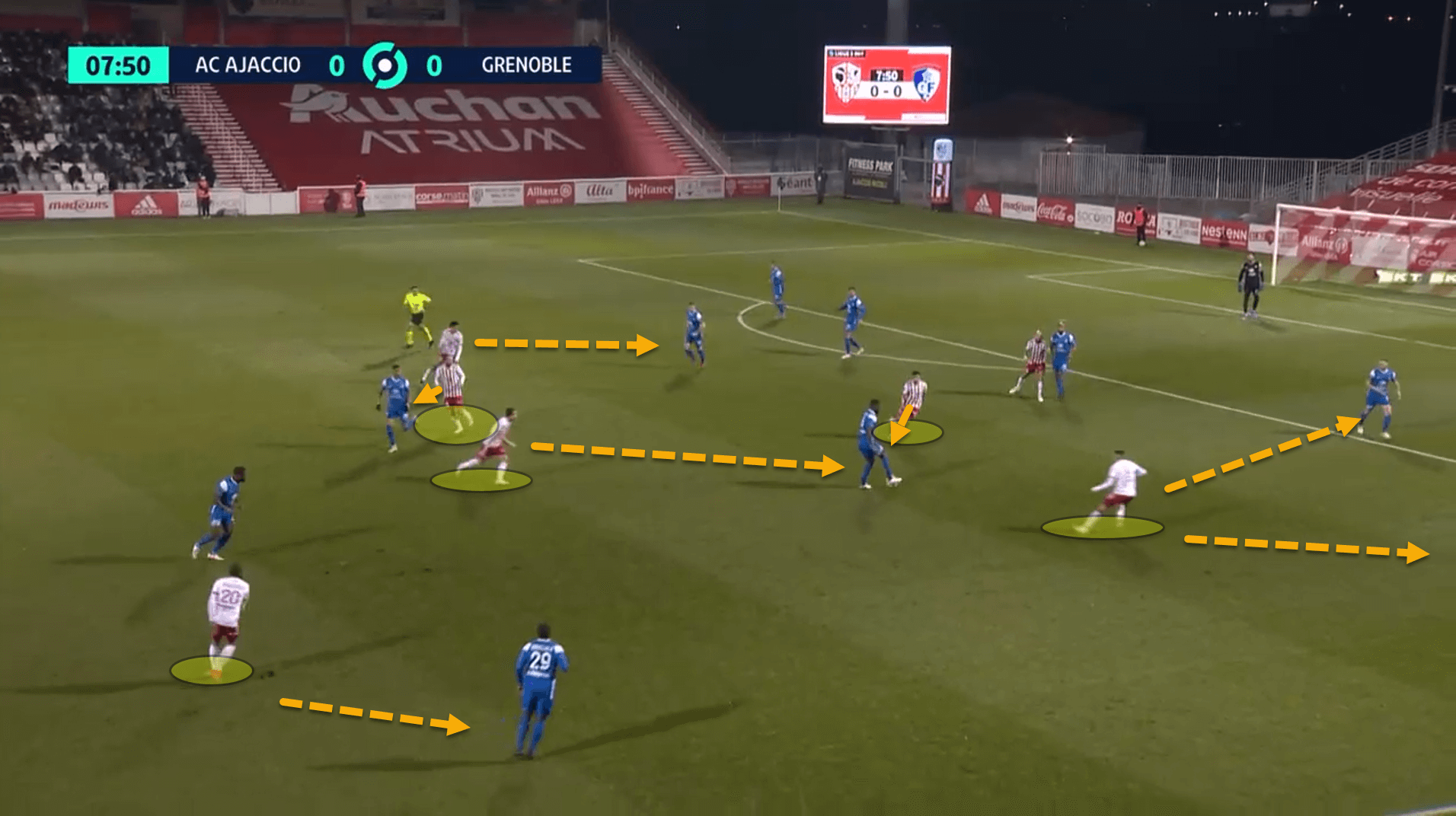 Goals against and xGA

Ajaccio have conceded the least amount of goals in Ligue 2 this season with 8. Le Havre are second only with 13. Two of their goals against have been from set-pieces too, which includes penalties and so Pantaloni’s side have allowed just six goals from open play in 19 matches – an incredible record.

Nevertheless, the side’s expected goals against (xGA) in the league in the current campaign is 12.36. While this, once again, is the best record in the division, it shows that the team are actually overperforming their xG by 4.36.

Ajaccio are allowing just 5.65 shots against them per 90. No side has conceded fewer shots in the second-tier. 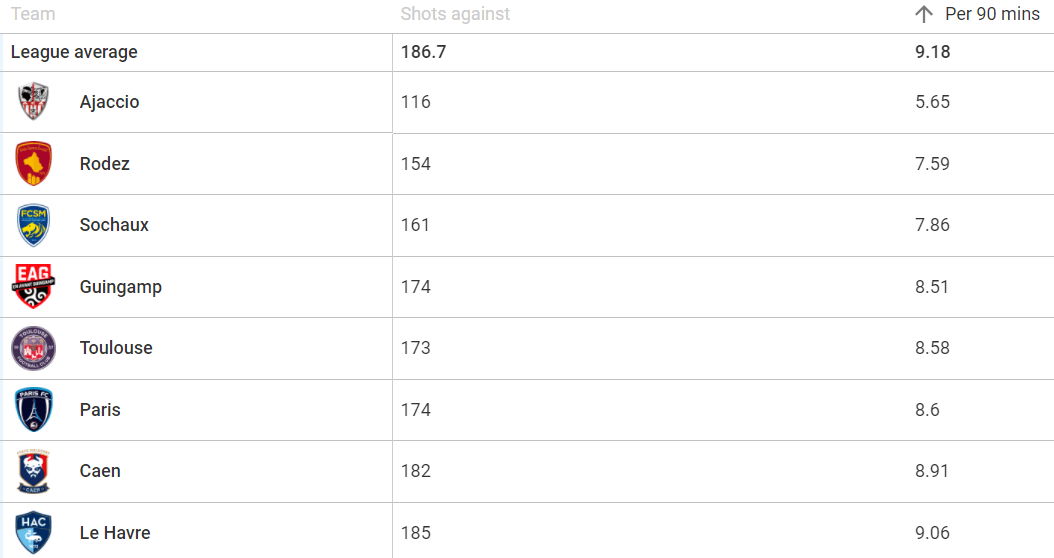 What is more interesting is that their xG per shot against stands at merely 0.107, one of the lowest in the league. Putting this into context, the Bears are conceding just 5.65 shots per 90 but these shots have an xG of just 0.107, meaning they are low-quality chances for the opposition.

Wildly restricting the number of chances that the attacking team is allowed to have while also limiting the quality of these opportunities is one of the main indicators that Ajaccio are performing incredibly at the back, and their 13 clean sheets in 19 matches this season proves this.

Of course, there’s still half a season to go and there are six teams at the top of Ligue 2 all vying for the title at the moment, but Ajaccio are looking strong at the top.

The main cause for concern for L’ours is that they are averaging merely 0.97 goals per 90 which is alarmingly low for a side at the top of the division and is also quite bizarre. If Ajaccio begin leaking more goals in, and their poor goalscoring tally remains the same, their season could spiral downhill.

Nonetheless, they look almost unbreakable at the back at the moment so if they can continue their pragmatic ways, Pantaloni may guide Ajaccio to Ligue 1 for the second time in his managerial career. 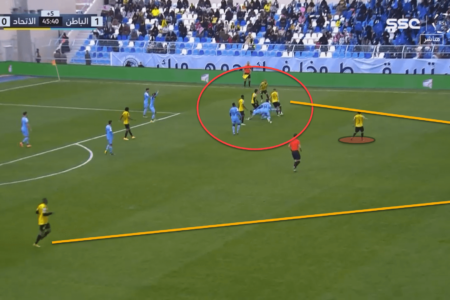 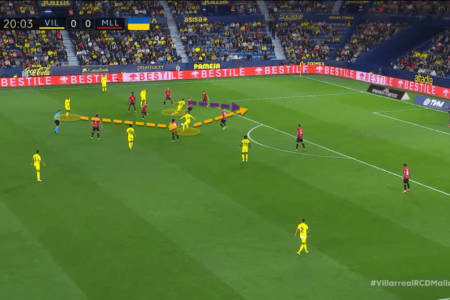