Bayern Munich ended 2021 in excellent form, winning their last seven games, with special results against Borussia Dortmund and Xavi’s Barcelona, and most would think Bayern will enter the new year, and carry on where they left off. As some may say, different year, same Bayern. Borussia Mönchengladbach sits on the other side of the Bundesliga form table, having won only one game in their last 6 league games, suffering heavy defeats to the likes of FC Köln and RB Leipzig 4-1, and a 6-1 loss to SC Freiburg.

The mark of a new calendar year can be the start of change, and Adi Hütter’s Gladbach certainly need to get their act together as games during this period come thick and fast, and points need to be put on the board if they still want to fulfil their European football ambitions. For Bayern, the league already looks wrapped up at the halfway point, but shows signs of a team that will stay motivated and not take their foot off the gas before the championship is won. While their mindset will not be diminished over the long term, COVID-19 is currently affecting the league leaders, with stars such as Manuel Neuer, Kingsley Coman and Alphonso Davies, out of contention against Gladbach in their Friday night match-up.

In this tactical analysis, I will be delving into Bayern Munich’s first phase organisation and explaining how some of Julian Nagelsmann’s subtle changes aided ball progression during the first half. Also, I will be looking into Gladbach’s comeback away from home, in addition to their transition tactics.

Gladbach utilised a 3-5-2 formation, with Yann Sommer in goal. The back three were made up of Nico Elvedi, Tony Jantschke and Matthias Ginter, with Luca Netz and Stefan Lainer at wing-back. In midfield, Christoph Kramer, Florian Neuhaus and Kouadio Koné. In attack, Breel Embolo and Lars Stindl. 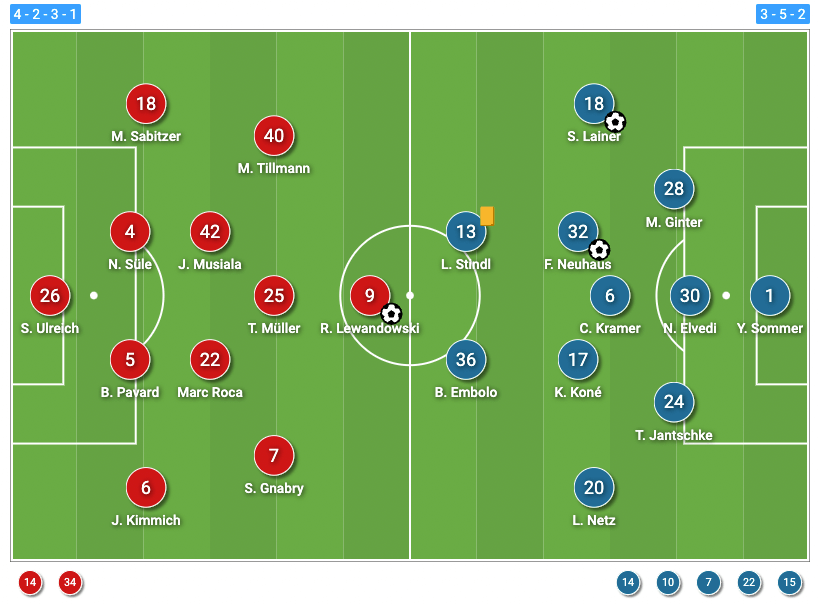 With a covid-19 shot team, Julian Nagelsmann had to make some slight alterations to his team, which may look quite confusing in the eye, but there was a method to his madness. Bayern’s build-up varied throughout; beginning play within the first phase with a flat back 4, with their double pivot staggering and creating space between them. Bayern would sometimes set up in a flat back three, with Sabitzer tucking in, creating a 3-3 shape during the first phase of play. From this point, Bayern Munich made use of different ways of creating space, which aided their ball progression.

A tactic used to good effect regarding playing the ball forward and progressing play was Bayern dynamic movement within this phase and pinning opposition players to create open lanes, which could pass the ball through or carry the ball forward.

Here we can see Bayern forming a back three, with Marcel Sabitzer, now positioned more centrally, and operating on the same line double pivot, creating a three-man midfield. 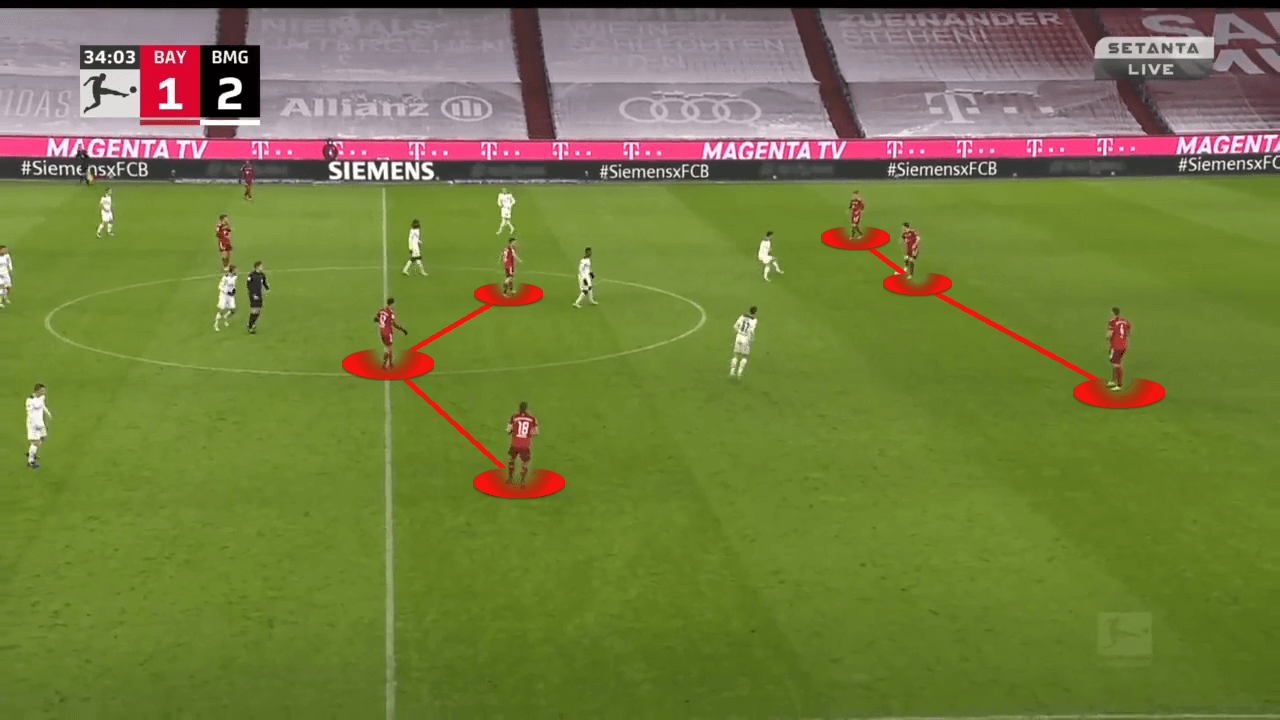 Jamal Musiala will position himself slightly higher, and Marcel Sabitzer will fill this midfield space. When this type of movement occurs, Bayern did well to capitalise by pinning the opposition. Here, Sabitzer originally starts wide left, but notices the open space, and takes up a midfield position. Breel Embolo notices this movement and marks Sabitzer and follows him into the centre. Bayern’s Benjamin Pavard, who is in possession, passes the ball to Niklas Süle, who can now drive into the open space because of Embolo being occupied, and not covering the wide space. 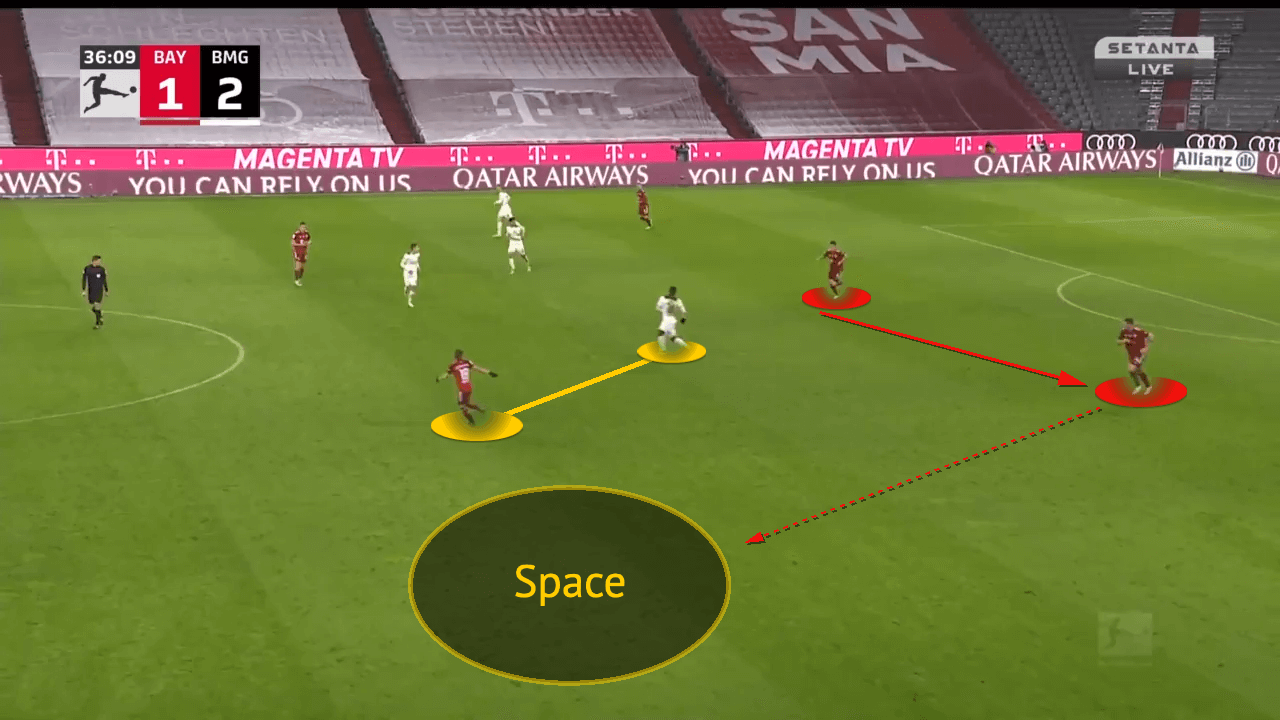 Another example of Bayern pinning their opponents and manipulating the space to their advantage can be seen here, as Gladbach attempt to win the ball during the opening exchanges of the game. Sabitzer is positioned slightly wider compared to the last example, and Breel Embolo attempts to mark Sabitzer by keeping him in his cover shadow. Florian Neuhaus attempted to cover Bayern midfielder Marc Roca in the centre, and with the positioning of the two Bayern players highlighted, an easy passing lane was created. 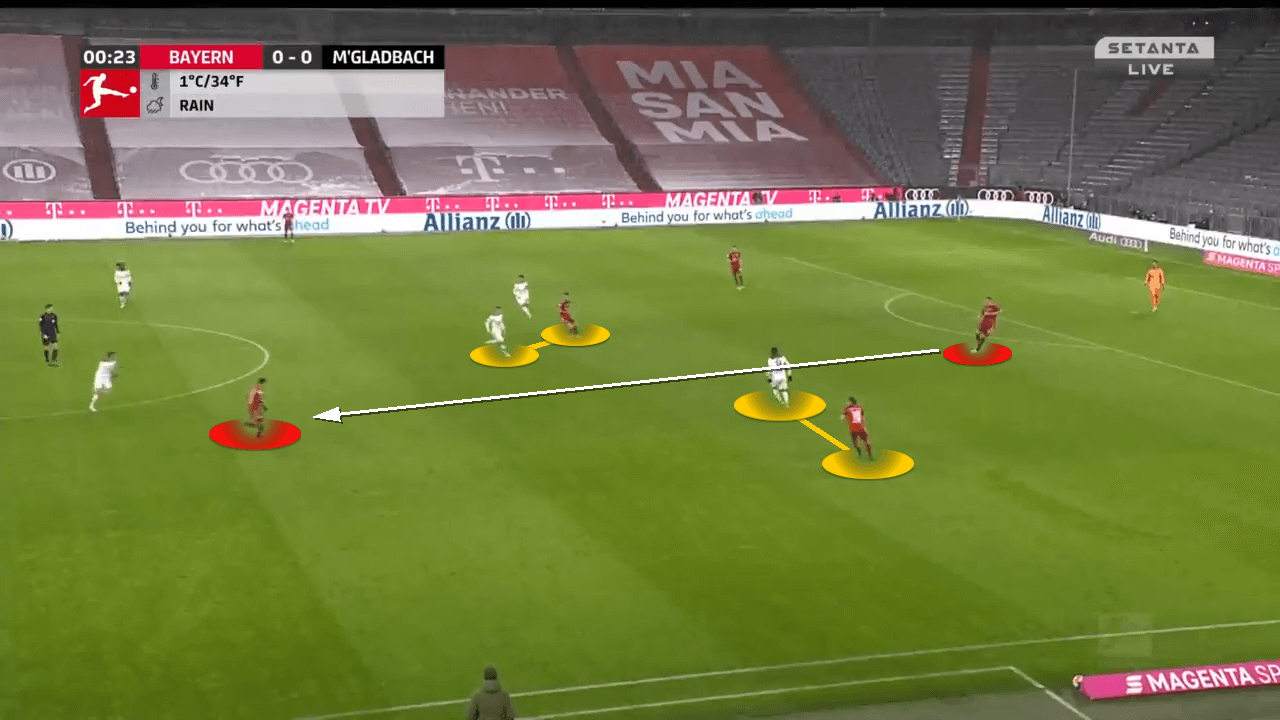 Joshua Kimmich played a huge part, about Bayern playing out, with his incisive passing through the lines and off-ball movement within the middle and final third. Throughout this game, both Serge Gnabry and Malik Tillman were positioned high and wide, to attract Gladbach’s outside centre-backs, and because of this, create space within the half-spaces.

Here, Gnabry is in possession by the byline and is instantly pressed by the opposition, and space is created within the Gladbach’s back-line. Joshua Kimmich noticed this opening and used these open windows with his under-lapping running from the defence. 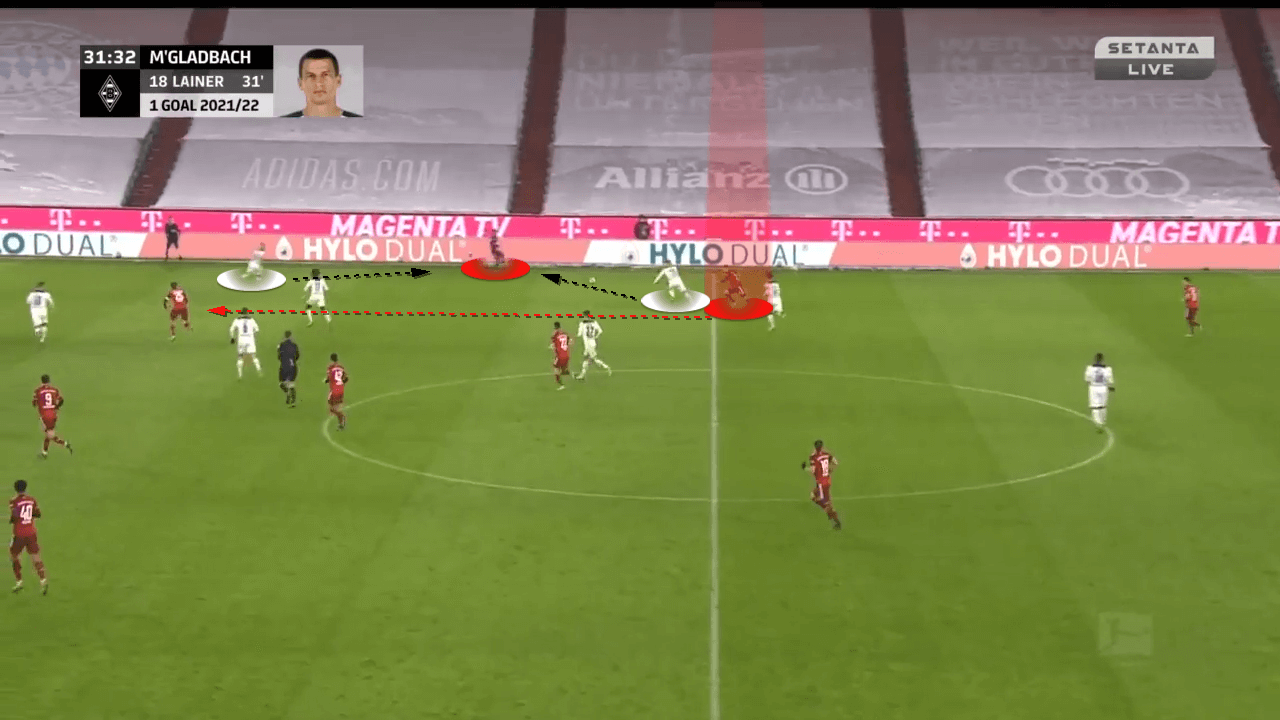 With Bayern casting the first blow, by going 1-0 with a spectacular Robert Lewandowski goal, the game looked done and dusted for a Gladbach perspective. Adi Hütter’s team had more to give. As mentioned prior, Gladbach employed a 3-5-2 formation, but in possession, the away side made some alterations. Gladbach 3-5-2 seamlessly transformed into 3-4-3, with Florian Neuhaus joining the attacking front two. Neuhaus was tasked to hold his position, close to Bayern left-back, keeping him occupied, and in doing so, creating space out wide. This sequence of events took place during Gladbach’s first goal.

Christoph Kramer has the ball, and Florian Neuhaus is keeping the attention of Marcel Sabitzer on the right-hand side. Neuhaus moves marginally deeper to receive Kramer’s pass and now in possession, Neuhaus passes out-wide for the first time to wing-back Stefan Lainer in a space. From this position, Lainer crosses in the ball, which eventually falls to Florian Neuhaus, who converts Gladbach’s first hurdle on their way back to redemption. 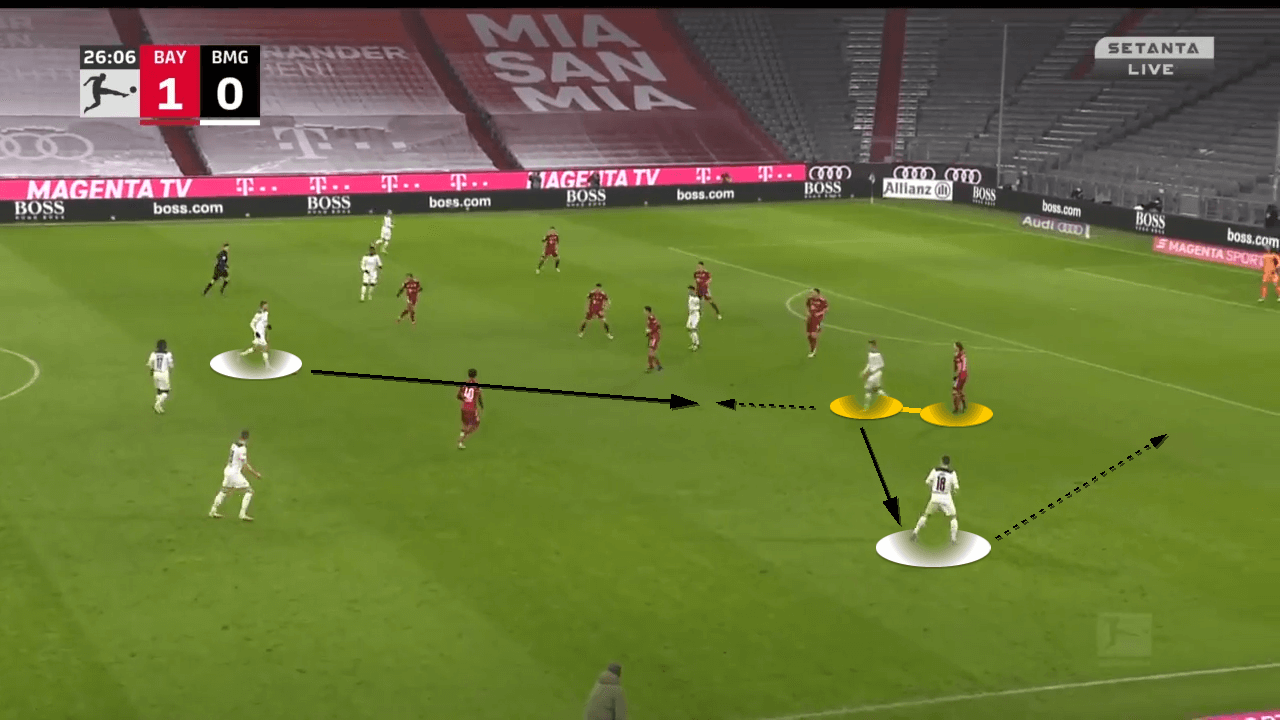 Another interesting element to Gladbach’s game within the first half was their set-piece set up, which contributed to their second goal, which put them in good stead going into the second half.

Gladbach wins a free kick in a central area and Luca Netz is responsible for delivering the set-piece. Matthias Ginter keeps himself tucked into the pack of players, but suddenly sets off with a curved run-in-behind, and is not picked by any Bayern Munich defenders. The ball drops wide and Ginter latches onto it, but Malik Tillman recovers and blocks Ginter’s cross, resulting in a corner, which Stefan Lainer scores from, making the score 2-1 in Gladbach’s favour. 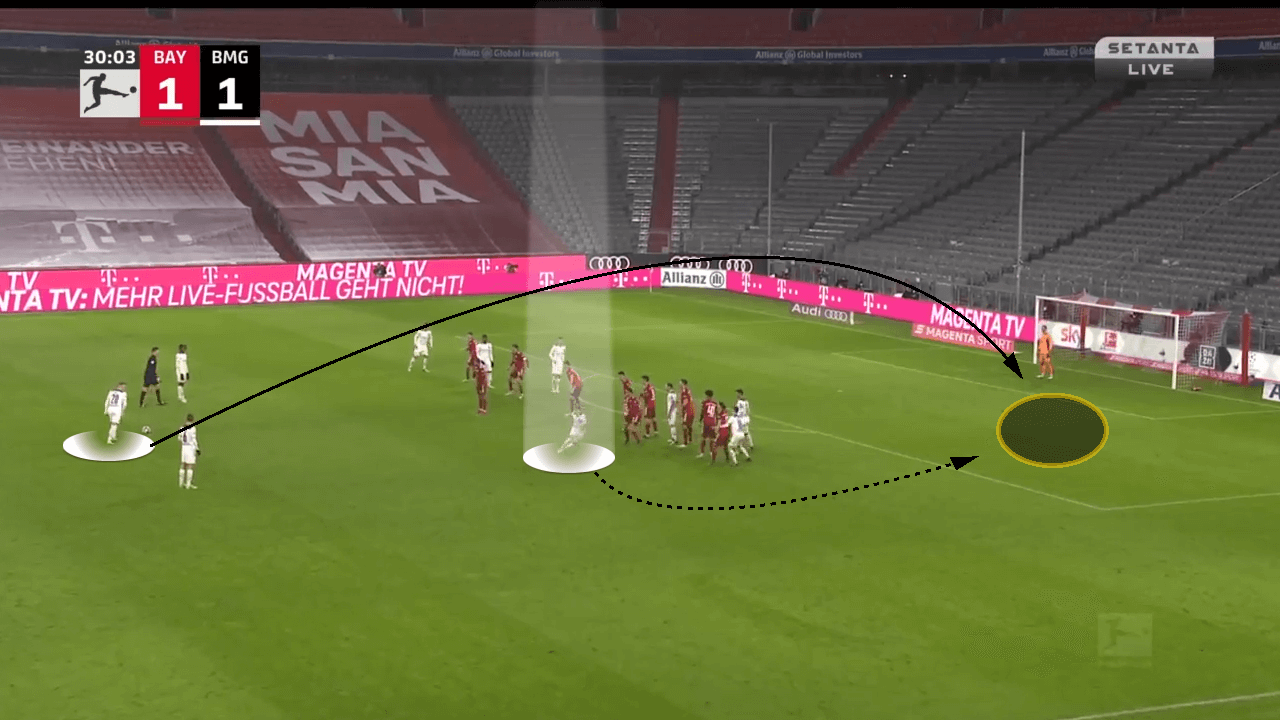 Whether ahead or behind, regarding the scoreline, Gladbach excelled when winning back possession and quickly launching dangerous attacks. During these defensive phases of play, Gladbach was incredibly aggressive and did their best work in the wide areas when picking Bayern’s pockets.

During the transitional phase, Breel Embolo was the star of the show, with his speed and movement behind, besides his pressing and holding up the ball when in possession to help sustain attacks, waiting for support from teammates. The same praise can also be shown towards Kouadio Koné, who was vital to Gladbach holding onto the brief possession they had during the second half, with his press resistance and ability to evade opposition pressure.

All these skills were key as Bayern Munich attempted and struggled to break down Gladbach’s low block and create meaningful chances, and to increase their attacking thrust, more Bayern bodies joined the attack and left space for Gladbach to take advantage of.

Here Bayern is trying to play out of opposition pressure, on the far left-hand side of the pitch, with Gnabry in possession. 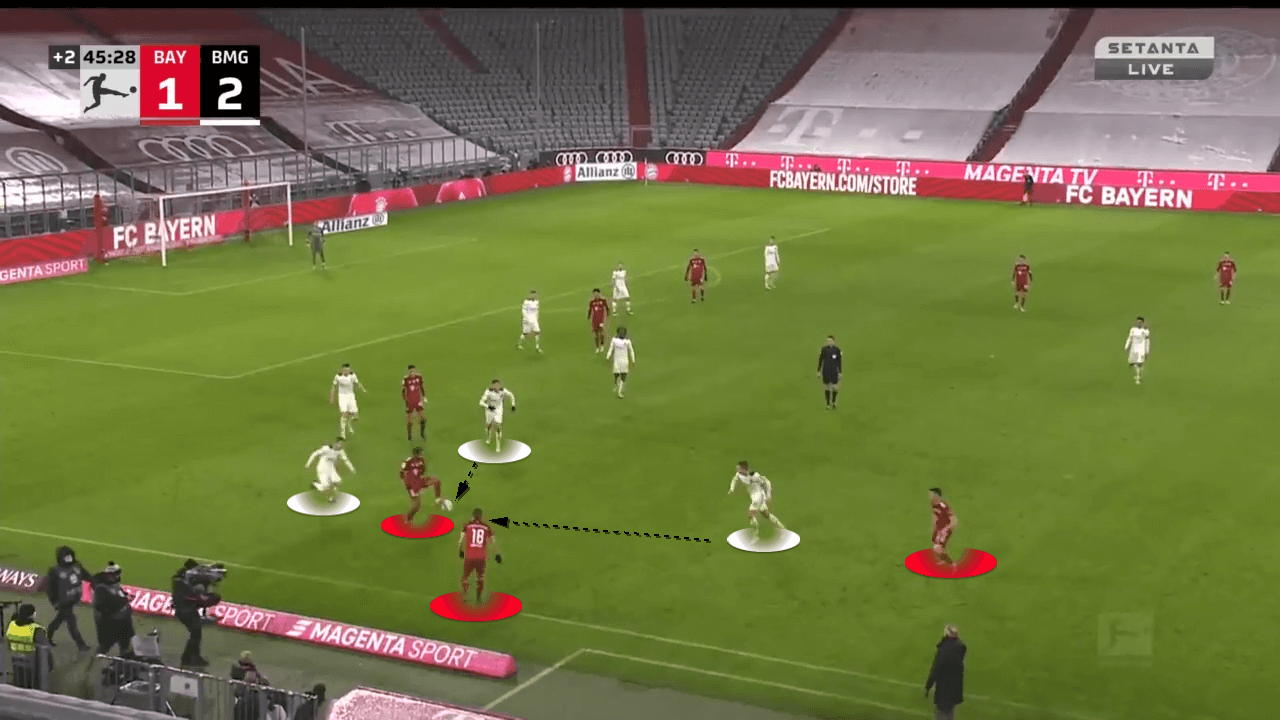 Gnabry’s pass backwards is loose and off the mark, and Breel Embolo can sweep up and begin another counter. 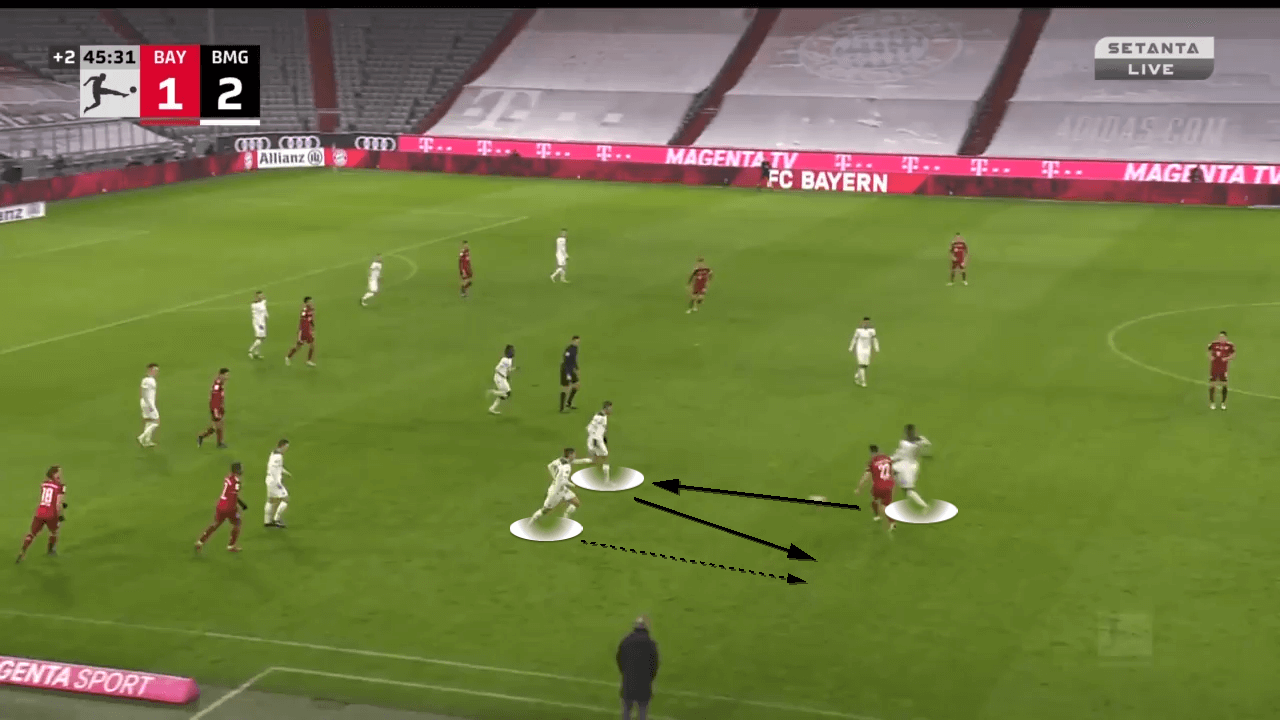 As 2022 arrives, Adi Hütter has work to do. His Gladbach team has suffered heavy defeats before their meeting with league leaders Bayern Munich, in the first game of the new year. Their opponents, on the other hand, continue to like the well-oiled machine we all know and love and do not look like slowing down as they firmly grasp the Bundesliga title. Most would think these two teams matching up against each other would be a formality, especially with Bayern at home. Nagelsmann’s men started well, even with a squad plagued with covid-19, and shortly went up 1-0, but Gladbach staged a comeback, with craft set-pieces and could create other meaningful attacks through transition and the work of Breel Embolo and Kouadio Koné, who were both excellent on a special night for the away side.