Serie A 2021/22 Inter vs Lazio preview: How Inzaghi can get revenge – tactical analysis

The Serie A teams came back from the break with some interesting displays. While some of the games were postponed due to many COVID-19 cases, others were intriguing and full of drama.

Inter’s game against Bologna was postponed, while Lazio had a difficult start of the year after a 3-3 thriller against Empoli. This all happened right before the upcoming Inter-Lazio game, where Simone Inzaghi would look to get revenge against Maurizio Sarri after the Nerazzurri’s 1-3 defeat earlier this season.

Looking at the teams’ form prior to the break, Inter are undefeated in all 11 Serie A games after the abovementioned defeat and are currently first in the league. Lazio, on the other hand, struggle to show consistency and have a rather unsatisfying record so far, being among the most efficient teams in attack, but yet failing defensively.

That expectedly puts Inter a step forward for their meeting on Sunday, although we already know that Sarri has some tricks up his sleeve and might surprise the motivated Inter side.

This preview in the form of tactical analysis examines both teams’ tactics and how Inzaghi could grab the three points his time.

Lazio are very productive in front of the goal, but we cannot say the same about their resistance in defence. The team have been struggling to maintain a balanced performance and often fall victim to their overcommitment to attack. There are a few vulnerabilities that Inter could successfully take advantage of should they have the right approach.

Inter are currently the league’s most efficient team in attack with 49 goals scored so far.  Their attacking flair could be used against Lazio in a few different ways.

Inzaghi’s side are very strong on a counter and they could easily use that against Sarri’s highly positioned defence and overcommitment to having possession in the opposition half. The team create 3.05 counter-attacks on average per game and many of them finish with a shot. They have now scored five goals on a counter, thanks to Lautaro Martínez, Joaquín Correa, Edin Džeko and Hakan Çalhanoğlu who successfully dismiss defences and advance the ball so they can shoot. Their counter-attacking movement is successful as it gives them freedom and they can use their pace to outrun the opposing players and deliver the ball in front of the goal. 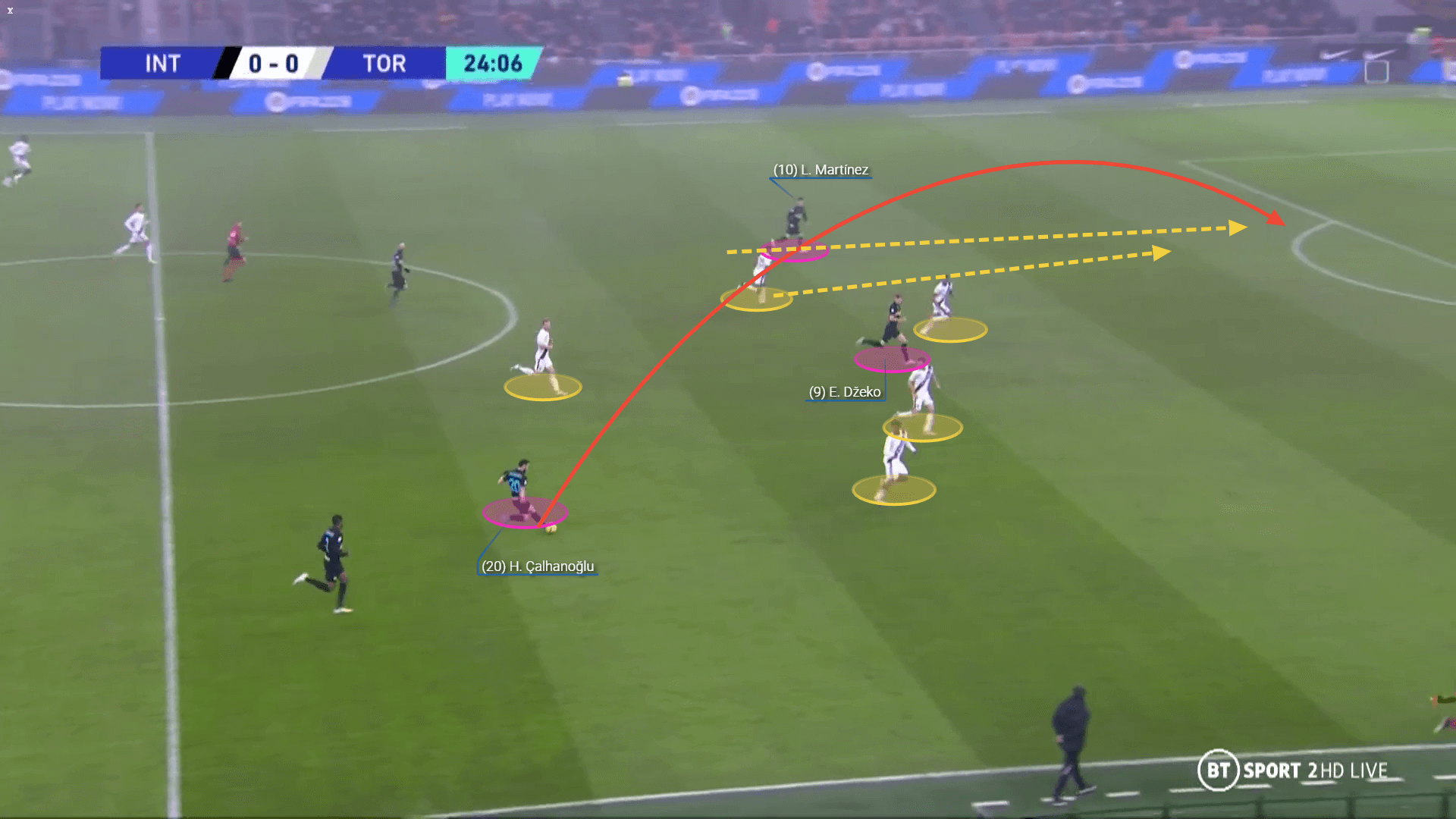 Instead of finding Džeko, Çalhanoğlu opted for a long ball to the edge of the box, with an aim to reach Martinez who outran his marker.Lazio, on the other side, are often failing in dropping back in such situations. The team’s possession-based approach and advanced positioning often result in leaving gaps behind. The team have now conceded four times from counter-attacking actions and continue to experience problems defending against speedy attacks and skilful players. They struggle in re-organising once they lose the ball, and while they are among the teams that have the fewest ball losses on average, theirs do often result in the opposition taking advantage and shooting. In their last meeting with the Nerazzurri, eight of Lazio’s losses in their own half resulted in them conceding shots.

Sarri’s side managed to limit Inter’s counter-attacking actions then, but they need to certainly be careful this time around too.

Inter could also use a few other things to gain an advantage against Lazio. The team are proficient in converting their set-piece opportunities into goals. While Lazio have been rather consistent in defending set-plays, the Nerazzurri’s abilities shouldn’t be underestimated. They have now scored nine goals from their attacking set-pieces and would definitely use their chances on Sunday too.

Six of Inter’s set-pieces goals have come from corners, meaning they will challenge Lazio’s positioning and reactions in the box. To be able to expose Sarri’s side, Inter need to use their aerial abilities. The team have proven so far that their aerial presence could put them forward, with their 12 goals after headers. This can not only prove efficiency in their attacking set-pieces but also in their crossing attempts. Contrary to Lazio, Inter rely on high cross frequency in their efforts to break through defences and the way to expose the Biancocelesti is by opting for headers instead of sending ground crosses. Sarri’s side have conceded seven times from such situations.

They are also the most unsuccessful team when it comes to defensive duels. Lazio has the lowest rate (55%) of won defensive duels in Serie A, making them an easy target for skilful players with strong dribbling abilities and control of the ball.

Inter are the team with the most penalty shots awarded this season. So far, they have had nine chances to score from the spot, taking advantage of six of them. Lazio’s players need to be careful in their interventions with the opposing players as their measured actions would be crucial in avoiding giving away penalty kicks and free kicks in dangerous areas. Luckily for Sarri, his team usually commits very few fouls per game compared to the rest of the teams in the league. Although, six penalties have been awarded against Lazio so far and they have conceded five times.

Another weakness that Inter could exploit is Biansocelesti’s inability to defend long shot opportunities. The team often fail in anticipating the oppositions’ movement and while they put efforts in limiting their movement forward, they often force their opponents into shooting from distance. They need to pay attention to that against Inter, who often attempts shots from outside the box and are often successful in it. Sarri’s side need to cover the former Milan player Çalhanoğlu tightly as he is proficient in bombarding his opponents from outside the penalty area, which has resulted in scoring four times from these opportunities this campaign. Lazio’s record of six conceded goals from long shots shows that they need to increase their awareness and improve their marking strategy. 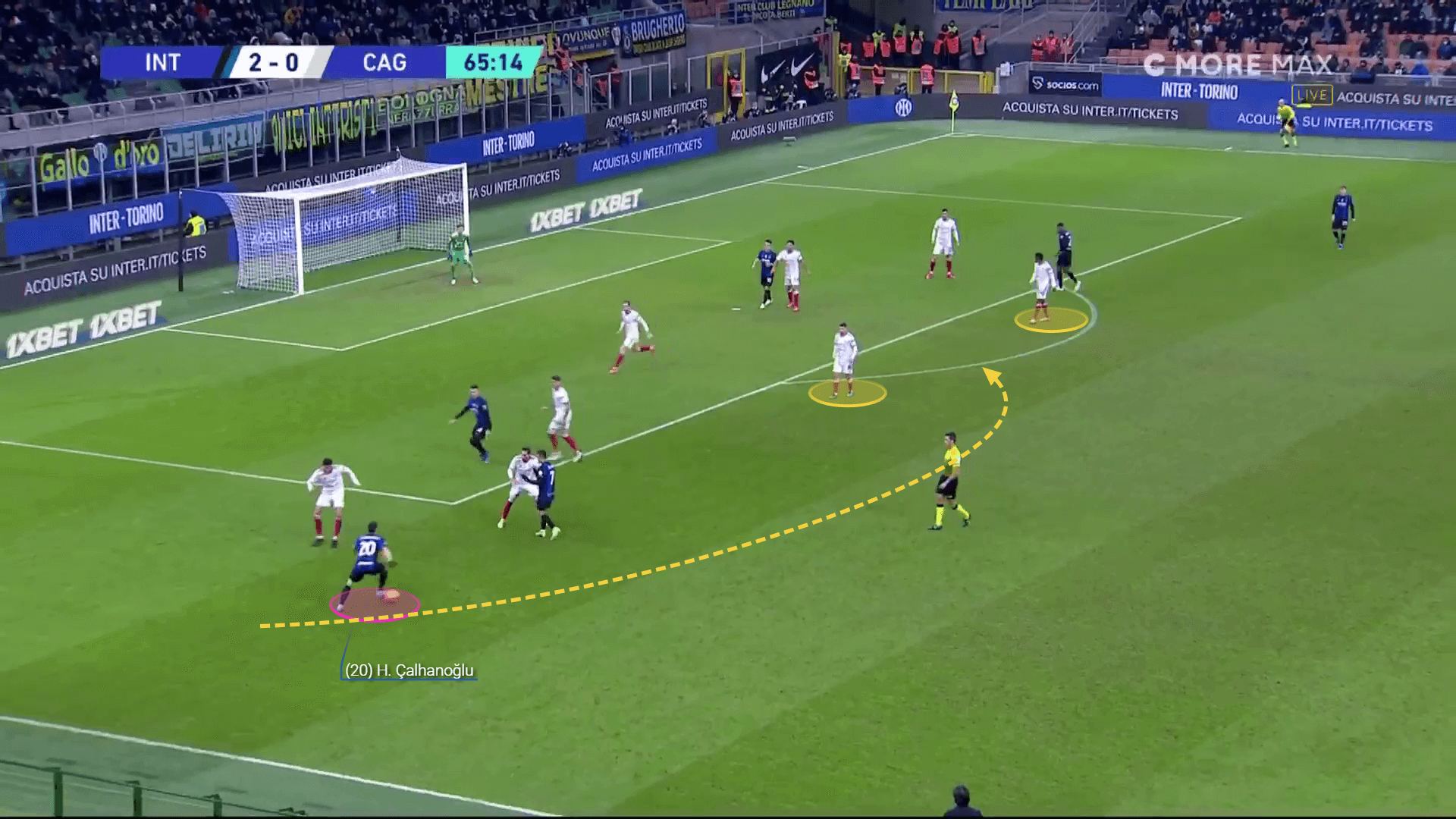 Çalhanoğlu was given freedom to cut inside with the ball. 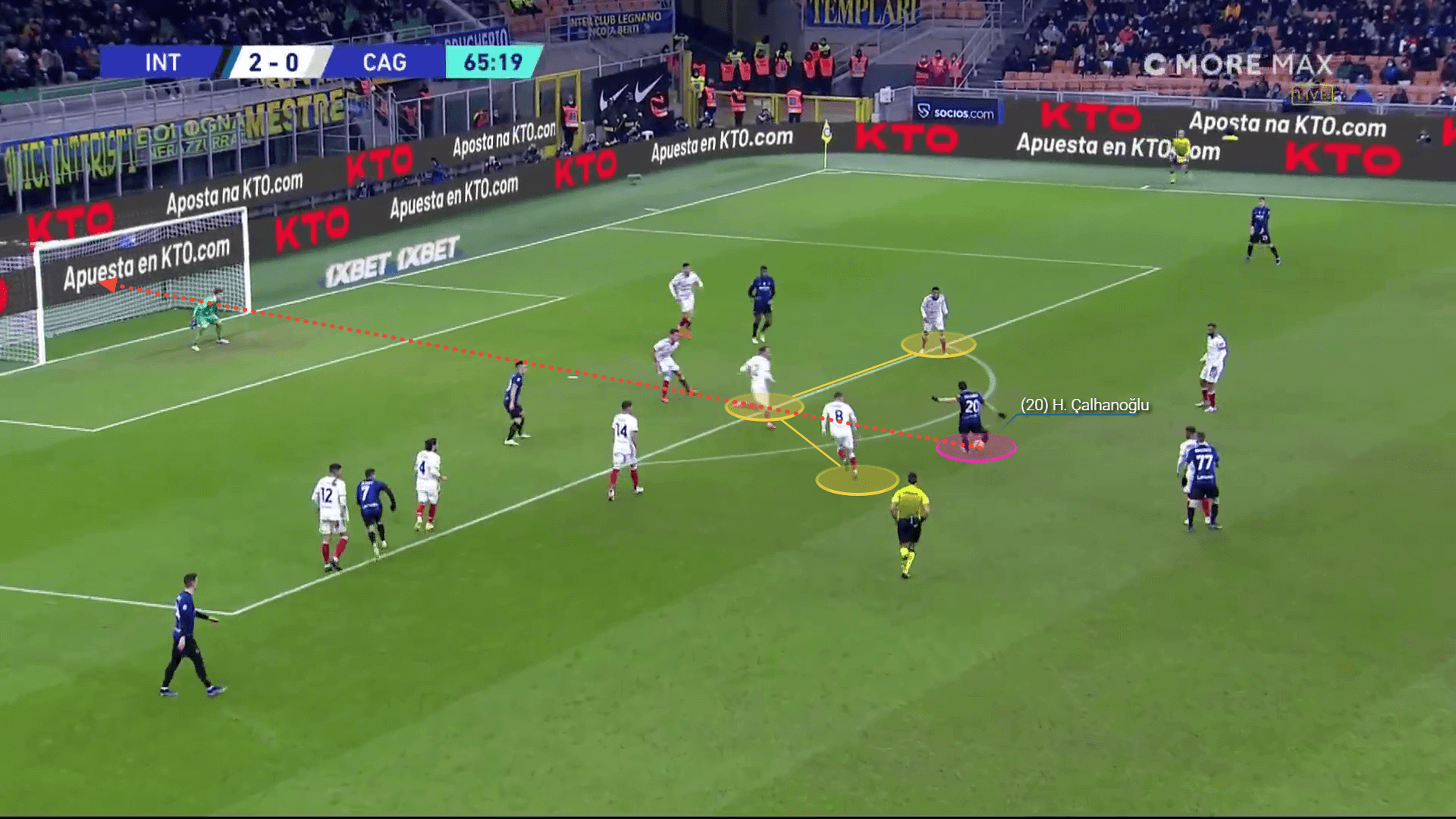 The Cagliari players failed to cover him. They attempted to block the passing lanes but this forced the player into shooting from distance, which is one of his strengths. This is a mistake that could’ve been easily avoided by one of the players pressing Çalhanoğlu and forcing him to send the ball back or out wide.

What should Inzaghi consider defensively?

While Inter have the most efficient defence in the league along with Napoli , they do occasionally have some limitations. In their last meeting, Sarri had instructed his players to block all of Inter’s counter-attacking efforts, while using every occasion to intercept the ball and trying to catch them on a counter and use their strengths against them.

Inter should try to limit Lazio’s attacking movement and keep them away from shooting as the team’s strategy might be simple but is efficient. They don’t throw all of their efforts in attack, instead, they prefer methodically build-up and retaining possession and looking for the right moment to attack and exploit gaps. While the team’s shot frequency is rather low, they rely better on the accuracy of their actions. The Biancocelesti have by far the best record in the league in terms of shots in target with their 45%.

Inter’s anticipation skills need to be on point and they need to increase the accuracy of their actions in possession in aim to avoid losing the ball and conceding dangerous chances. 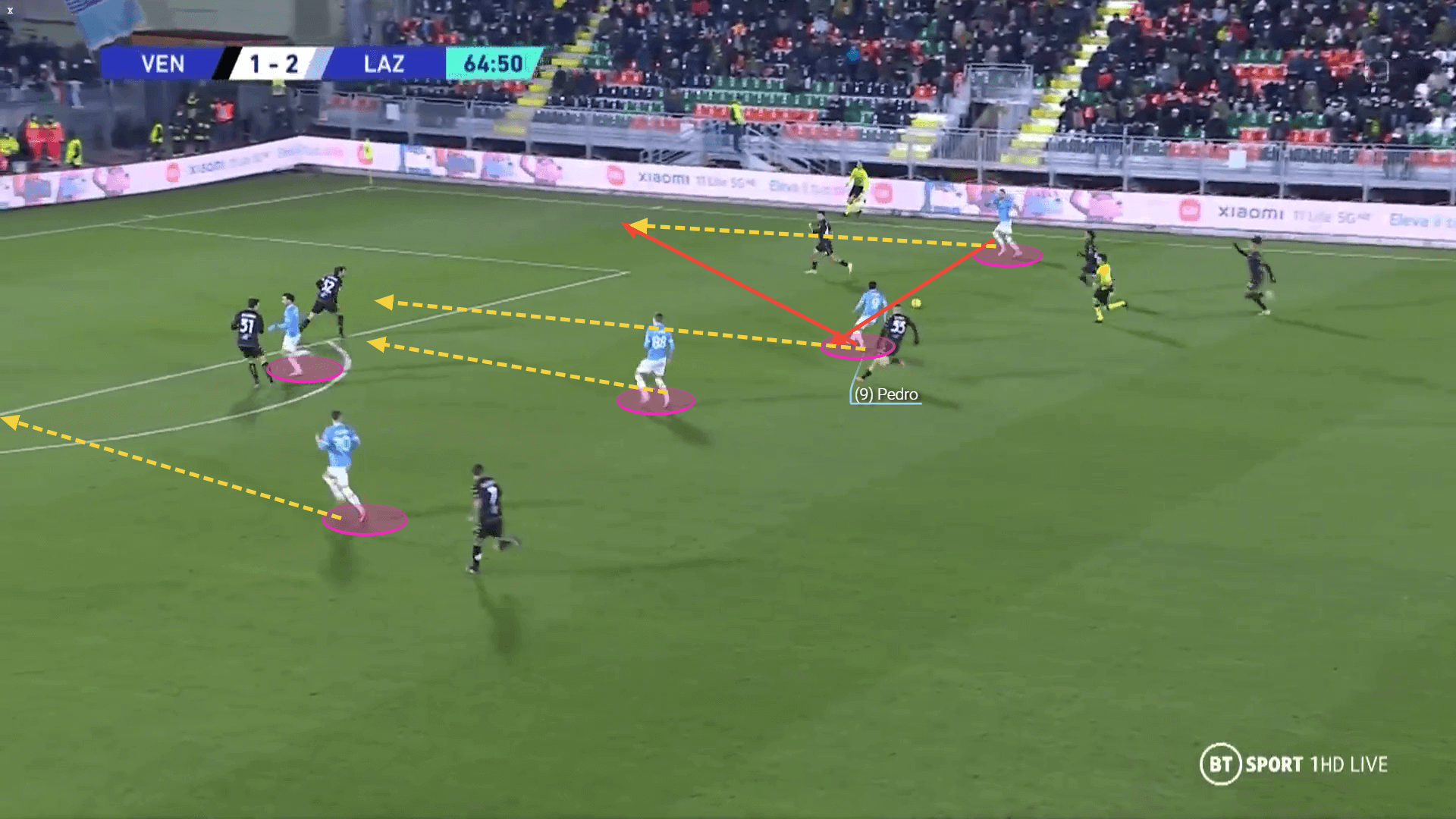 Seconds later, Pedro received the ball but immediately sent it back to the flank with one-touch combination, winning more time for his teammates centrally to move to the box. Their reading of the game is crucial in attack.

As our analysis showed, Inter have all the right attributes to be successful against Lazio should they take advantage of their opportunities. Maurizio Sarri will undoubtedly prepare his team for all the threats that might come their way but it will be a matter of concentration and discipline to be able to stop them.  Despite their inconsistency this season, Lazio do have their strengths and will use every chance they get to expose the opposition. Both teams need minimise the mistakes and try to score their chances on the goal, as every bit will be important for the final success. Inter, though, have a Supercoppa Italiana final against Juventus next week, which might affect their focus on the Lazio game.