Joey Veerman 2021/22: What PSV can expect from their new midfield maestro – scout report

Joey Veerman is now a PSV Eindhoven player. After rumours linking him with both Rangers and Feyenoord over the January transfer window, he completed the move to PSV on Tuesday evening.

The 23-year-old Dutch midfielder arrived from Heerenveen where he played for the club for three seasons. Veerman has been impressing in the Eredivisie for a couple of seasons now and a move to a bigger club was always going to be the natural progression for him as he had outgrown Heerenveen. How his career progresses will be interesting, and PSV will allow him to take the next step, playing at the elite end of the Eredivisie and in European competitions, this may also help put him on Louis Van Gaal’s radar for the World Cup this year.

This tactical analysis and scout report will look at why Veerman was in such demand this transfer window and what PSV can expect from their new midfield maestro.

Veerman is a central midfielder usually deployed as part of a double pivot or in a midfield three depending on the tactics of choice. When playing for Heerenveen this season he was often featured on the left side (despite being predominantly right-footed) as shown by his heat map this season.  In possession, Veerman likes to drop deeper to get on the ball and orchestrate play with his brilliant passing ability and range, which we will later discuss. He is a silky and intelligent football who plays with his head and demonstrates brilliant footballing intelligence. Veerman is not a player you associate with pace or power but what he lacks in those areas he makes up for in quality and reading of the game. 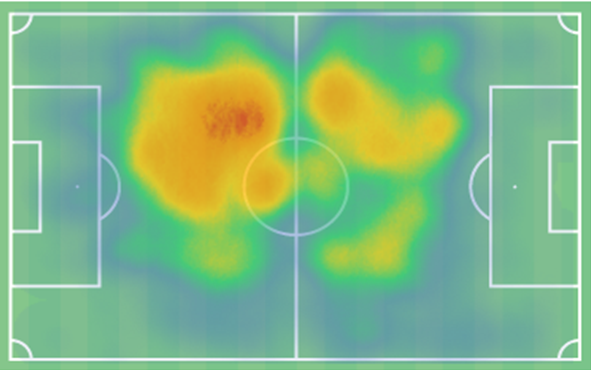 When addressing the data for this season in the Eredivisie it quickly becomes apparent why both PSV and Feyenoord were both so keen to sign Veerman. He ranks very well in the majority of passing metrics with him being top five in expected assists, assists, through passes, passes to the final third, smart passes and progressive passes, this is an extremely impressive performance on the ball. Below is a graph showing Expected assists and assists in the Eredivisie and as you can see Veerman is above average in both metrics. It also shows how magnificent Dusan Tadic has been for Ajax. 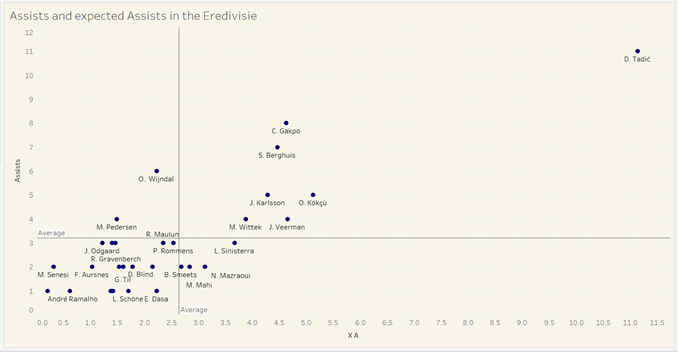 Another strong aspect of Veerman’s game is his progressive passing. The below graph shows progressive passes per 90 and passes into the final third per 90, showing a player’s ability to progress the ball forward. Again, Veerman ranks above average in both metrics. 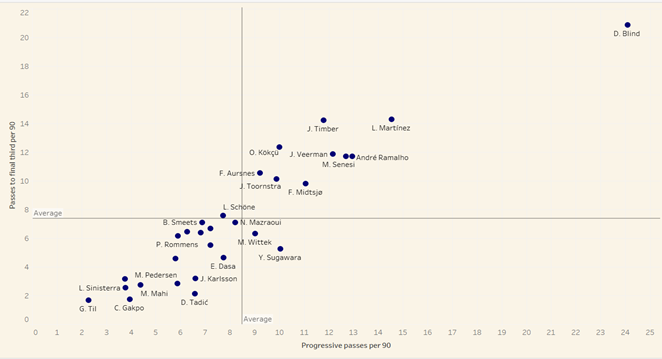 Finally let’s look at through passes and smart passes, as shown below. A smart pass is defined as a creative and penetrative pass that attempts to break the opposition’s defensive lines to gain a significant advantage in attack, according to Wyscout. Both these metrics show a player’s ability to break defensive lines creating attacking opportunities. This time it is Veerman’s turn to be the standout performer in these metrics, being well above average in both metrics. 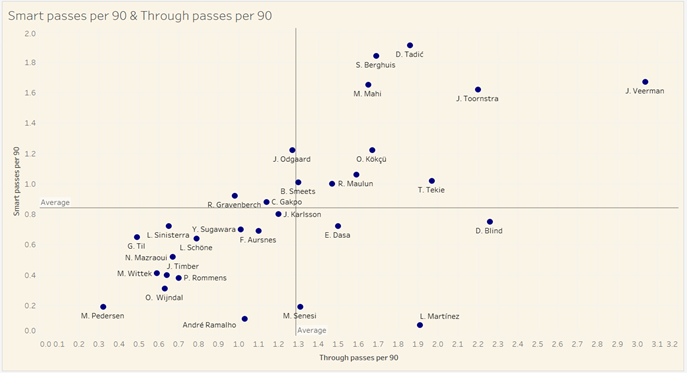 Looking at the data hopefully allows you to understand the type of player Veerman is but also that he is one of Eredivisie’s best when it comes to passing and passing metrics.

As we alluded to earlier Veerman loves to drop deep and dictate play with his passing ability. By dropping deep, it allows Veerman more space which in turn allows him to progress the ball easier and dictate the play. At Heerenveen, you could have described Veerman as a quarterback, as the majority of their attacking play came through him. The following examples show both Veerman’s passing ability and the effect of him dropping deeper on the team and their attacking play. This example is from a recent game against Feyenoord, the Heerenveen centre back has played a pass to Veerman, and Feyenoord is aggressively pressing, to combat this Veerman plays a first-time pass over Orkan Kocku into the highlighted space for Heerenveen to beat the press and advance into the opposition half. By doing he has eliminated the Feyenoord press and taken six opposition players out of the game. 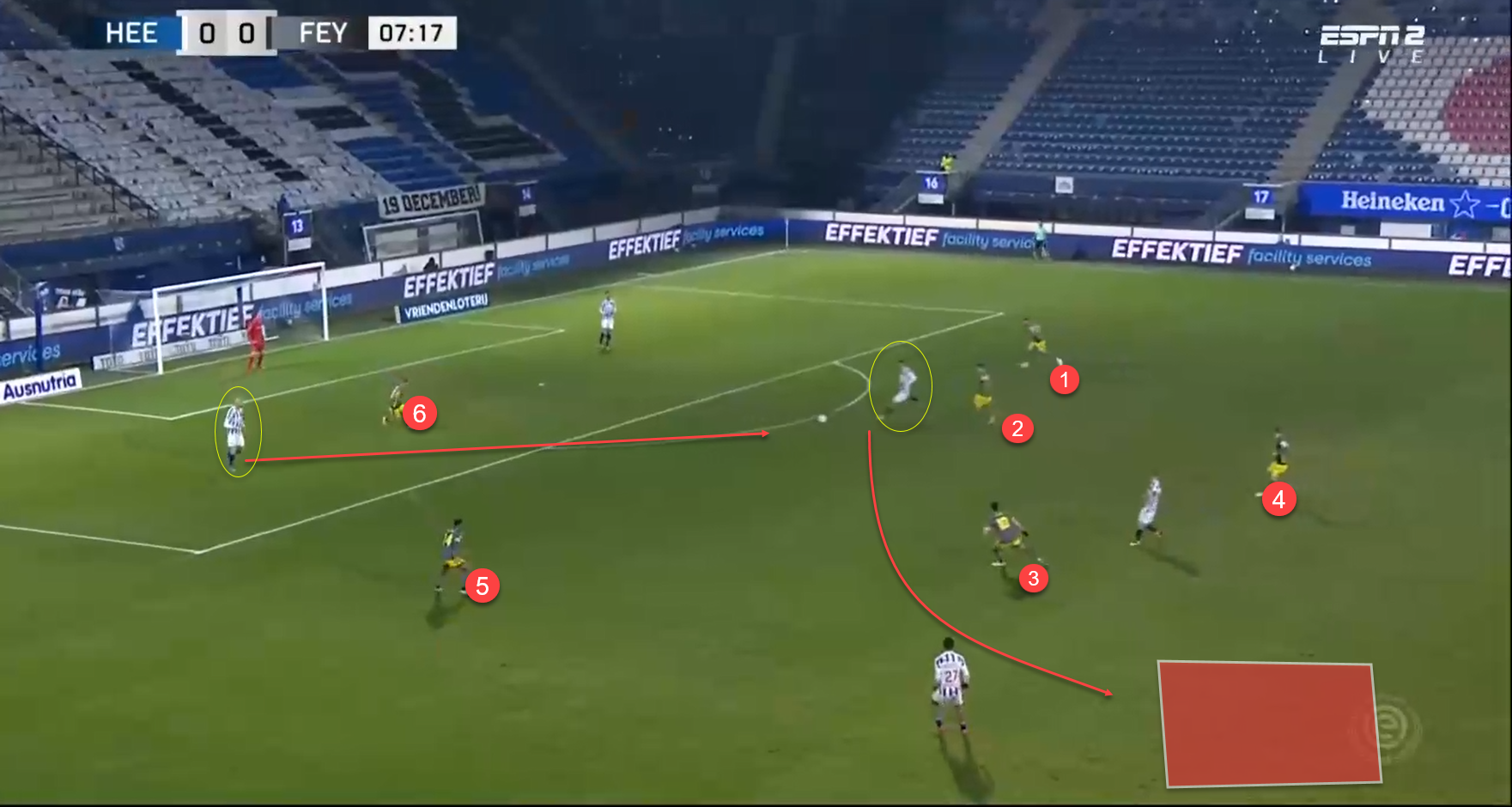 This is a combination of excellent execution but also great footballing intelligence to understand the surroundings and identify the potential space.

Another example come against Veerman’s current club PSV. Veerman has again dropped deeper to orchestrate play and PSV is currently sitting in a low block. Veerman is looking to progress the ball beyond the first block. These types of situations are what Veerman will be faced with on regular basis with PSV as most teams in the Eredivisie will sit in a low block against them.

After receiving the ball, Veerman plays an elegantly clipped ball over the top of the PSV midfield block and into the path of the Heerenveen player. The pass is played with great execution and touch plus it has progressed the ball up the field for Heerenveen and puts them in the opposition final third.

Both these passes should show Veerman’s ability to orchestrate the attacking play but also his quality while on the ball, something which makes him highly effective in possession.

Veerman also has the ability to contribute to the attacking play further up the field and this is usually achieved using through balls. It shouldn’t come as a surprise to you by now that Veerman is an excellent passer of the ball and his through ball ability is no different, regularly showing the ability to pierce defensive with one pass. In fact, he leads the Eredivisie in through passes this season. The following example brilliantly demonstrates Veerman’s attacking contribution higher up the field. This pass comes against Groningen earlier in the season. Veerman is on the ball in the opposition final third and they are sat deep defending their box with lots of defensive bodies back, Veerman identifies the free man and calmly plays a well-timed through ball to the free man who has a touch and gives Heerenveen the lead, as shown below.

Lots of players in this situation would have come out and played a simpler pass to Heerenveen’s number five, however, Veerman is brave on the ball and is not afraid to try riskier passes. This can also be seen in a game against Heracles where he can play a timed through ball.

In this case, Veerman has just received the ball and Heerenveen are on the counterattack. Veerman has two passing options available. He doesn’t play a pass first time which you would assume; he has a touch and carries the ball. 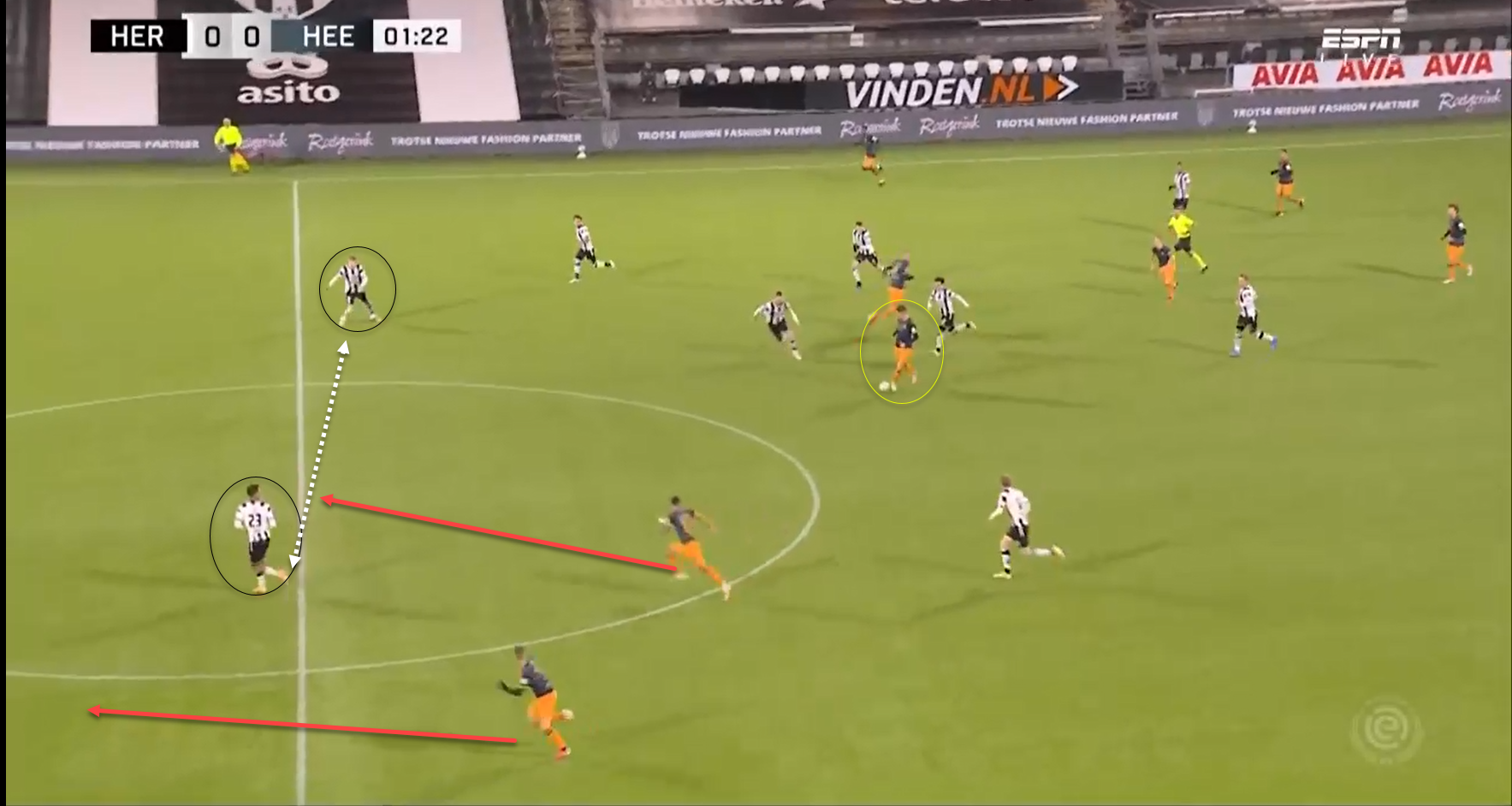 As he carries the ball the obvious pass would be a straightforward one to Heerenveen number seven. However, Veerman decides to play a harder pass between the Heracles centre backs but this pass will more likely lead to a goal-scoring opportunity than the wide pass to number seven.

A sign of Veerman’s footballing intelligence is shown here with this pass, the highlighted Heracles centre back has turned his back as he spins to move out towards number seven as he anticipates that where the pass is going. At this moment Veerman pulls the trigger and releases the man through the middle who is through on goal. Hopefully, this has perfectly shown Veerman’s through ball ability but also his footballing intelligence.

Veerman is not an aggressive footballer, you will rarely see him sliding into tackles or making aggressive duels however this does not make him ineffective out of possession. Instead, he uses his head and makes well-timed and calculated interceptions. Veerman has averaged 4.62 interceptions per 90 this season, showing he is proactive in his attempts to win the ball back. This can be shown with a great interception against Feyenoord in his last game for Heerenveen. Feyenoord is deep in the Heerenveen half on the left-hand side. The man on the ball is going to play a pass inside to Feyenoord man in the box, as shown below.

However, Veerman reads this pass and drifts into the passing lane to intercept the pass, nullifying any potential Feyenoord attack and winning the ball back for his side.

These types of interceptions are common within Veerman’s games. Due to his position, he must contribute defensively and having this ability to intercept and disrupt play helps make him an effective all-around footballer.

PSV are getting themselves one of the best midfielders in the Eredivisie and playing for a stronger side should only suit Veerman, as this will come with better players and more possession which should lend itself well to Veerman’s game. In this analysis, it should become apparent that Veerman is a technical footballer who uses his reading of the game and on-ball quality to affect the game both in and out of possession. In addition to him being an excellent passer of the football which allows him to orchestrate attacking phases with such ease. Veerman can add to this current PSV side and may help catapult them to an Eredivisie title.