After losing three key players in the summer, finishing in seventh place for the second year running and missing out on European qualification by only four points, you could have forgiven the RC Lens supporters for thinking their period of progress was ending, and for being a little pessimistic ahead of this campaign.

The players who departed were their top scorer Arnaud Kalimuendo, who returned to Paris Saint-Germain, right back Jonathan Clauss who was sold to Marseille and midfielder Cheick Doucouré moved to the Premier League to join Crystal palace.

However, those losses have not had a negative impact and Les Sang have once again started the season strongly. As you read this, Lens are undefeated after seven games, winning five and drawing two and are currently sitting in third place in Ligue 1.

This article will be a tactical analysis and a scout report of the tactics that Franck Haise has implemented so far this season, and how they helped Lens challenge towards the top of the Ligue 1 table. It will be an analysis that focuses on how the team applies their attacking and defensive tactics.

This season has seen Franck Haise stick with his preference for the 3-4-3.

The 3-4-3 and 3-4-2-1 that Lens implement are similar, as the two formations can rotate simultaneously between each other throughout the same match. The two free-roaming number 10s support the play out wide when Lens attack through the wide areas, making it look like a 3-4-3, but they can also position themselves centrally to support the play through the middle of the pitch which makes the formation look like a 3-4-2-1

This system provides a good balance between defence and attack. As Lens like to keep possession and control the games through possession, this system allows them to attack with five players as the wingbacks join the attacking line.

Whilst attacking, it also allows them to keep a solid defensive structure as the two central midfielders will stay back, meaning they have five players ready to defend immediately. When they are defending, the wingbacks drop into the defensive line and create a five-man defence.

The wingbacks are fundamental to how Haise wants this approach to work as their positioning is the key to how well the team transitions from defence to attack, and then from attack to defence. They also provide the team with flexibility, and they can be instructed to attack and defend in different ways.

A crucial factor in Len’s attacking game is how well they build up. They like to use the full pitch in the first phase of the build-up. Ideally, they look to progress up the pitch, from the goalkeeper and then through the centre-backs.

The image below shows how Medina and Gradient Len’s right and left centre-backs pull out wide and hug the touchline for the goalkeeper’s distribution. 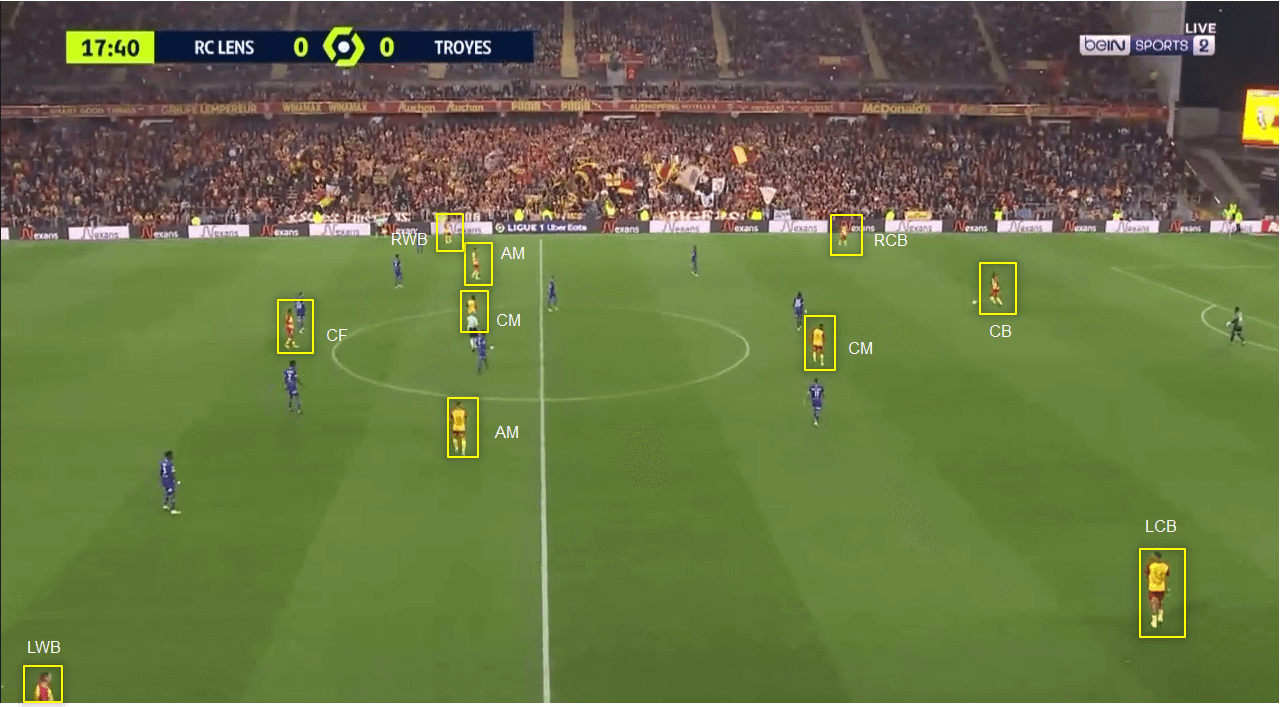 The reason behind this is so Lens’ wingbacks Haïdara and Cabot can pin Troyes’s wingbacks, stopping them from pushing high up the pitch and pressing Lens as they build up.

This has a positive knock-on effect for Lens across the pitch and provides them with more space to be progressive. You can see how one central midfielder has pushed up to create a 3v2 central overload, which then allows the two number tens to push out into the half-spaces. This creates the opportunity for Lens to build through the wide channels with an extra man. Like in the example below.

You see how the same structure has been applied during the second phase of their build-up and it creates an overload down the left-hand side. Left centre back Facundo Medina pushes to create a hybrid defensive back three. This means the Troyes’ right forward is the player who must close the ball. Both he and one of Troyes central midfielders are shifting over to stop the overload, but by doing this are effectively being pulled out of position. 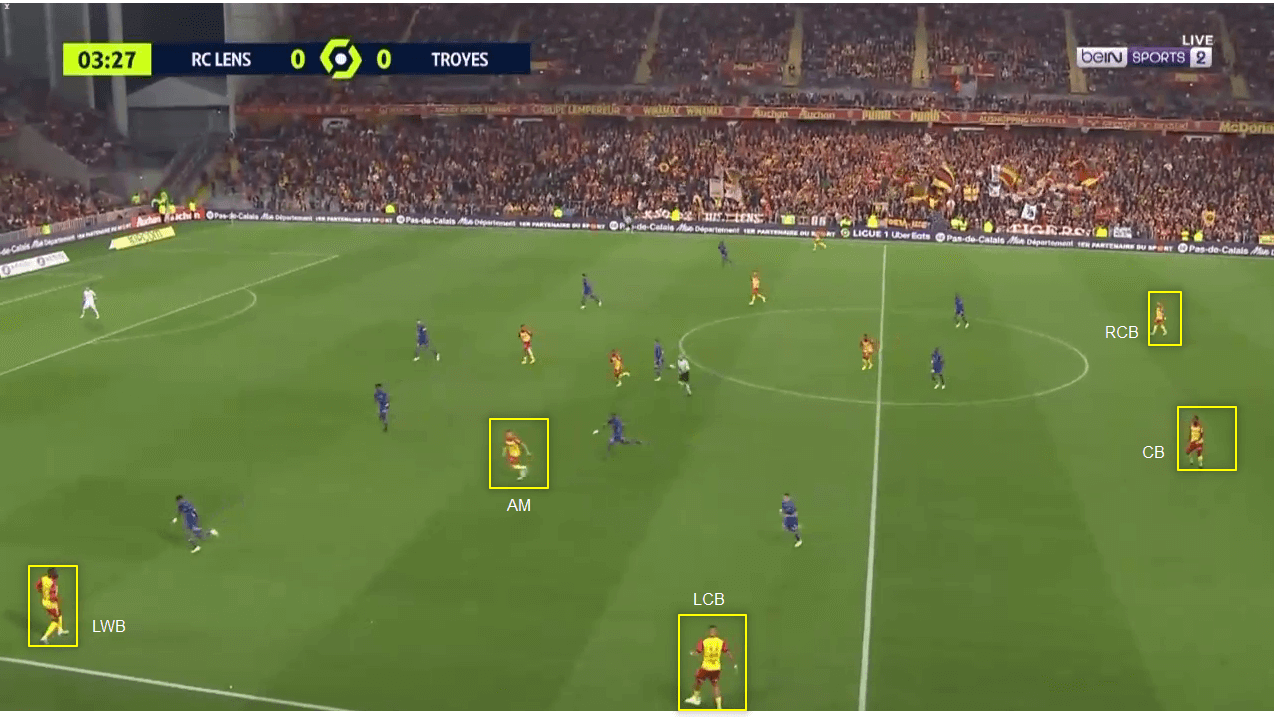 Lens’ approach during the attacking phase is to keep possession. In Ligue 1, they have accumulated 58.7% ball possession in the seven games they have played. This is the fourth best in the league so far this season.

In possession, they like to play it purposefully with passes in between the lines and spaces of the opposition’s defensive shape, looking to take full advantage of the space with good off-the-ball movement. To enable this, they aim to be creative with the passing.

A particular trait within their attack this season has been to get in behind their opponent’s defence playing through balls. Here, you can in these images how Lens start each attack out wide and immediately look for the through ball in behind FC Lorient’s defence. 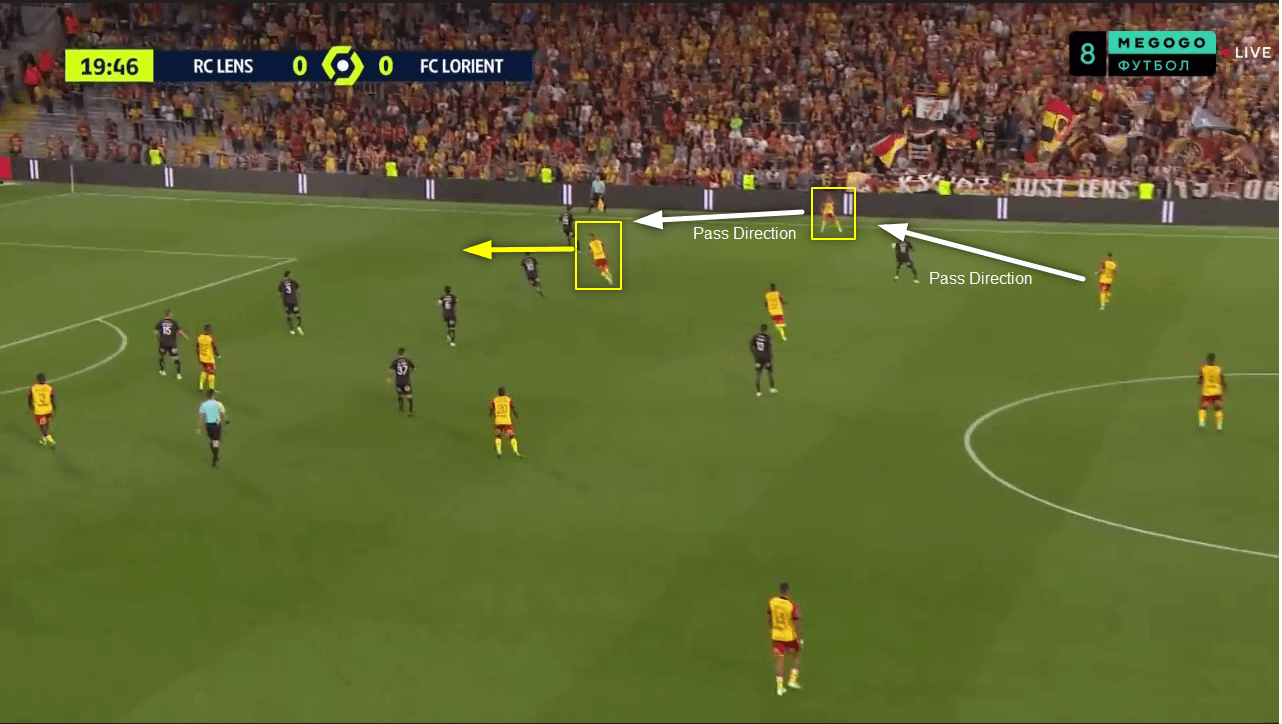 In this one, you can see how Lens have created are about a top create 2v1 overload down the right and how they have two players running in behind on either side of FC Lorient’s left wing-back. 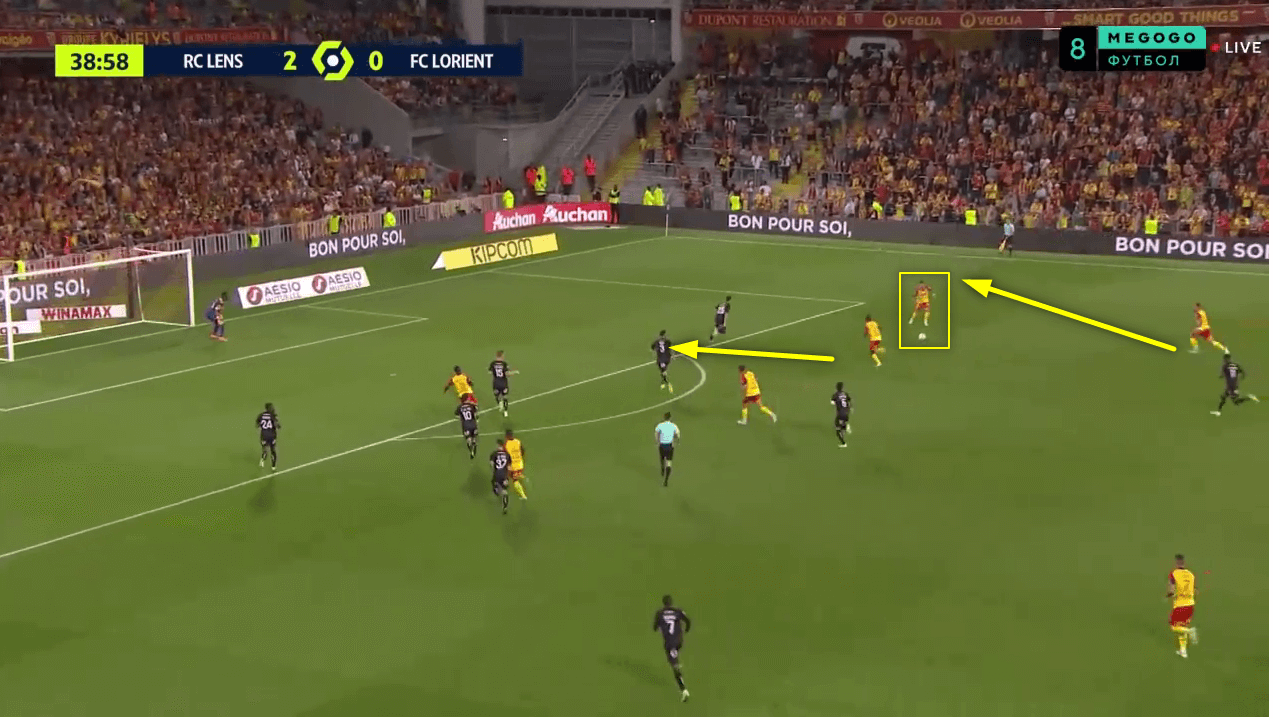 This season, Lens have averaged 8.4 through passes per 90 which is the fifth highest in Ligue 1 and they have the highest success rate with 55.6%

They are always looking to penetrate the opposition’s defence with passes into dangerous areas. Whilst assessing how productive they are in possession, we have compiled the data below to show their creative passing against the rest of the teams in Ligue 1. 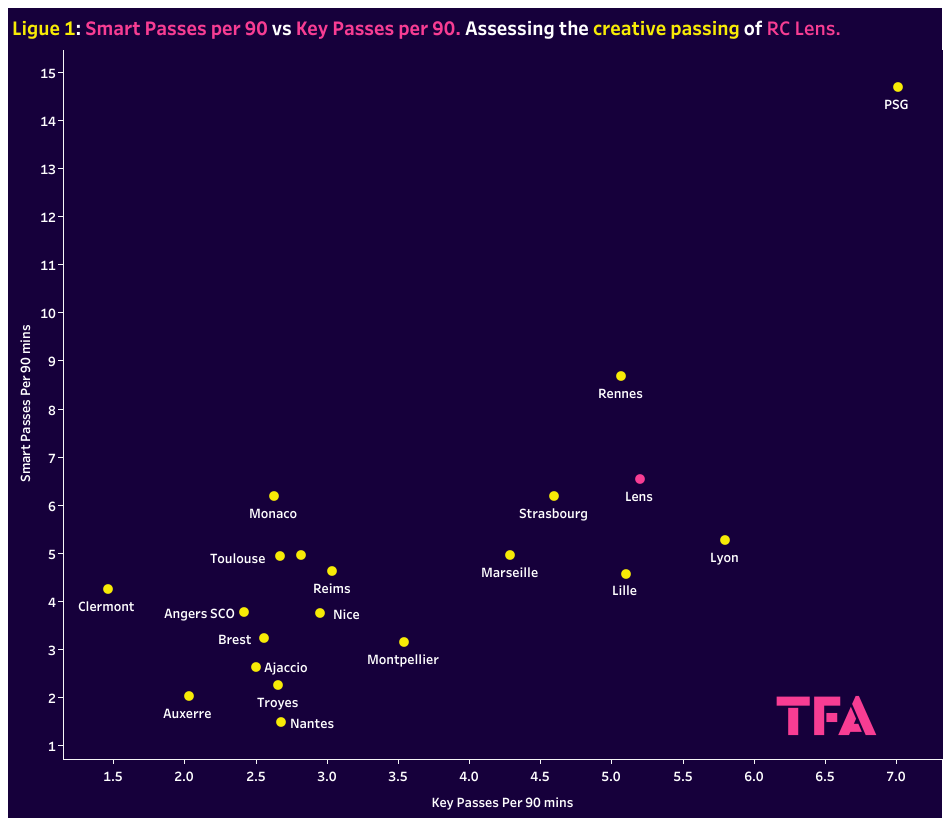 A smart pass is a creative and penetrative pass that attempts to break the opposition’s defensive lines to gain a significant advantage in attack. A key pass is a pass that immediately creates a clear goal-scoring opportunity for a teammate.

Lens offer variety when they are defending. When they lose the ball, they will counterpress and look to win the ball back immediately, but when the opposition holds possession, they fall back into the well-balanced defensive shape the 3-4-3 formation allows.

Franck Haise does adapt his defensive tactics to match that of the opposition they are playing, although the adjustment is how high up the pitch they hold their defensive block.

When defending high up the pitch Lens sit in a 5-2-3 block, as the image below shows. 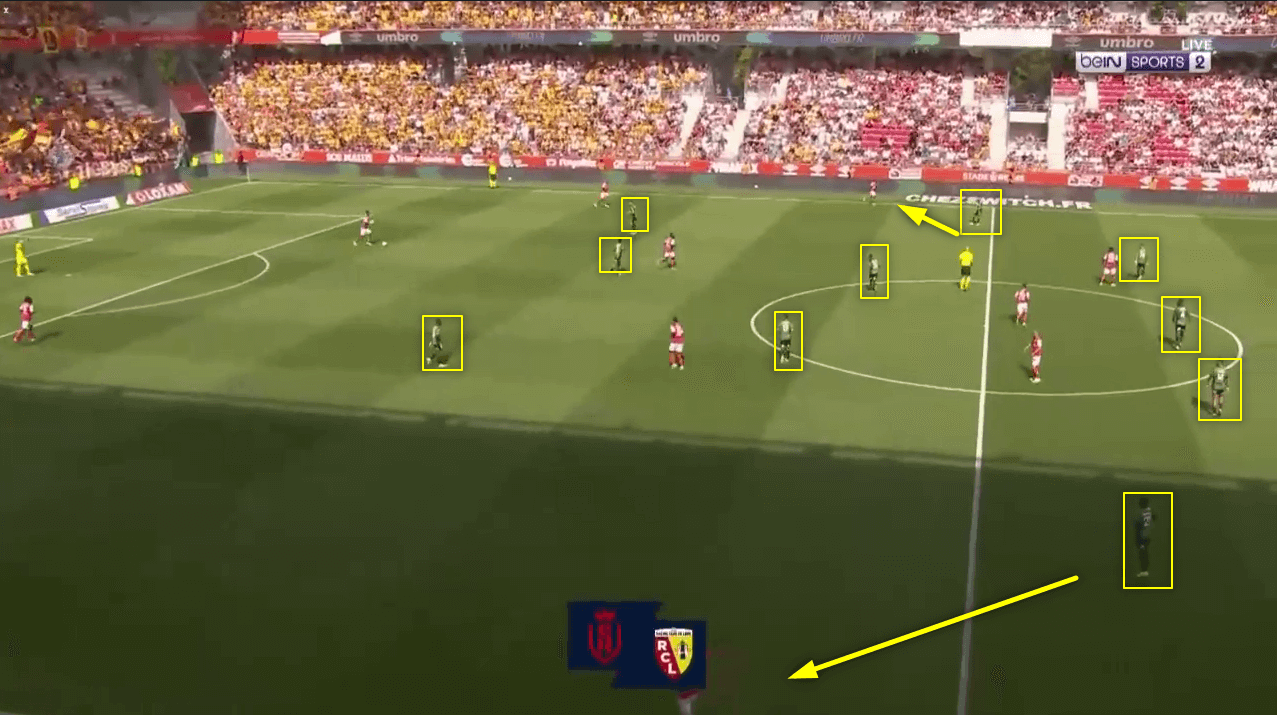 They allow the centre-backs to keep possession without putting any aggressive pressure on the ball. Instead, they keep their defensive shape and look to protect the centre of the pitch by cutting the passing lanes off through the middle of the pitch.

This is to encourage the opposition the play the ball out wide which then triggers the team to press. Once the pass is made into the wide areas, Lens then apply a man-orientated press where one Lens player will press the man in possession with intention of forcing an action, but as that is happening, the rest of the team closes in on all the possible passing option that surround that player, condensing the area the opposition can play through at the time. 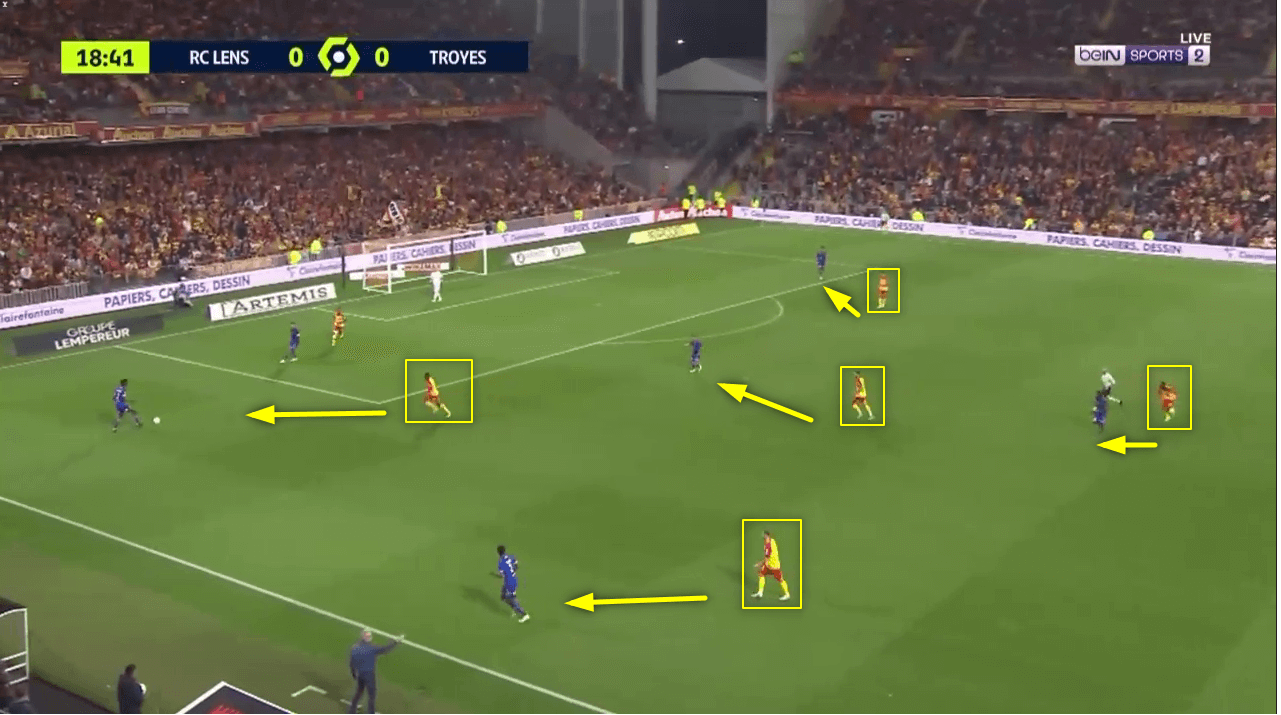 Once their opponents enter the second build-up phase or are building up from the middle of the pitch, the Lens defensive block shifts from a 5-2-3 to a 5-3-2.

This added security in the centre of the pitch is to stop the opponents from playing vertically and releasing space between the lines. It also gives Lens a better opportunity to stop any central overloads inside their own half. The player to drop back in to make it a midfield three is the number ten whose side the play is not being played on. 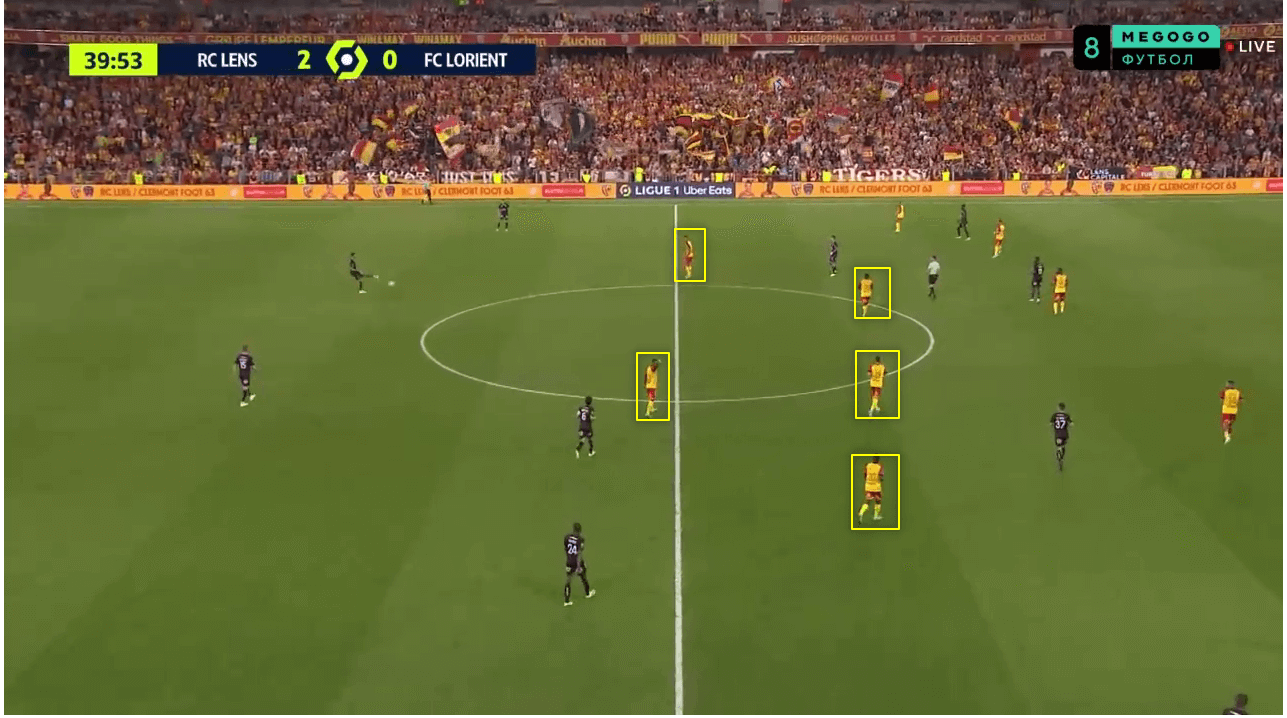 We have already confirmed in this analysis how Lens like to keep possession and control the game with the ball. When they lose the ball in the attacking third, their initial reaction is to counterpress and win the ball back.

This is where Lens are vulnerable and can often leave themselves exposed. Their counterpress is aggressive but lacks coordination. A decisive factor with counterpressing is the positioning of the team and their attacking play right before attempting to counterpress. Lens like to attack from wide areas, with players running forward into space and away from the ball, making a successful counterpress difficult because the players must play as close to one another as possible so that they can press together as a unit.

The next two examples are Len losing possession in their opponent’s half. Because of how Lens play when they have possession, committing several players forward and attacking spaces. The first image shows how Lens have eight players ahead of the ball and one player not in a position to stop a Troyes counterattack, leaving just one central defender with the play in front of him. This exposes them to 3v1 or 3v2 disadvantages. 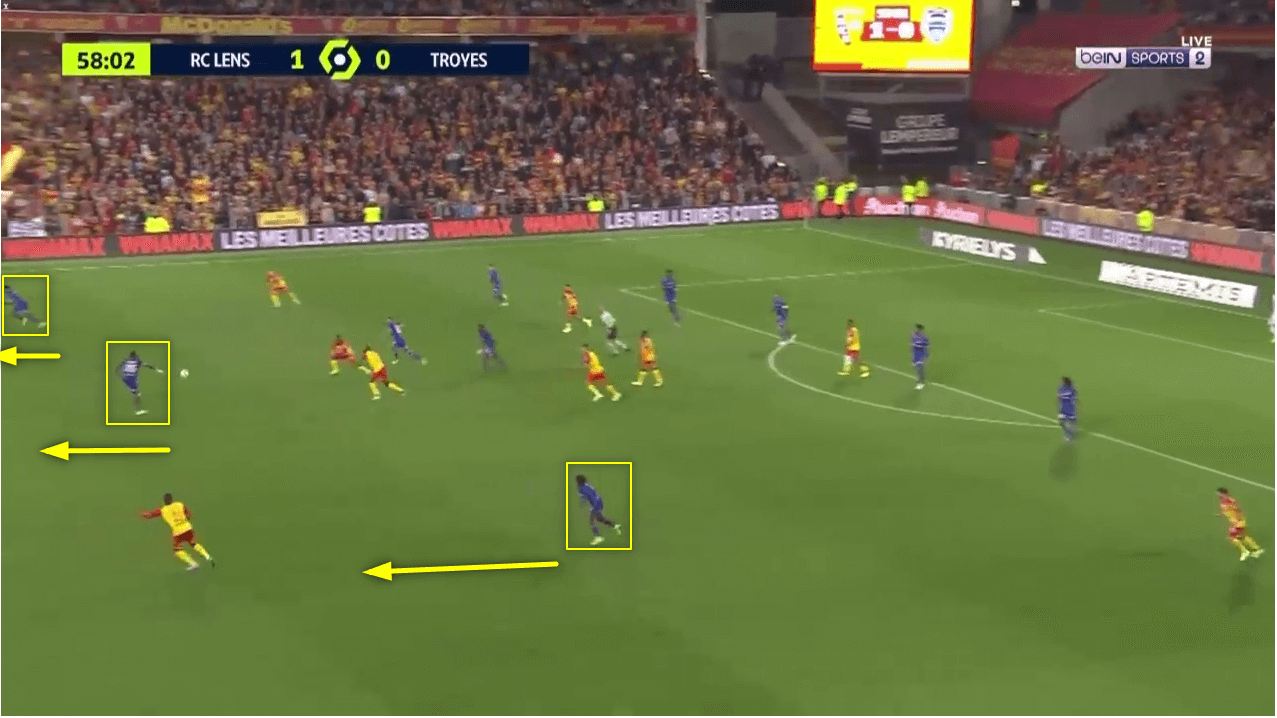 This position is similar but with two centres back (off-screen) left to try and stop Lorient’s attack. What is evident in this example is not just the number of players that are behind the play but the number of options the Lorient ball carrier has. When you put pressure on the ball you must aim to force your opponent into a specific area or action to enable the team to adjust in transition. It feels like Lens are not prepared for losing the ball and not winning it back through the first press. 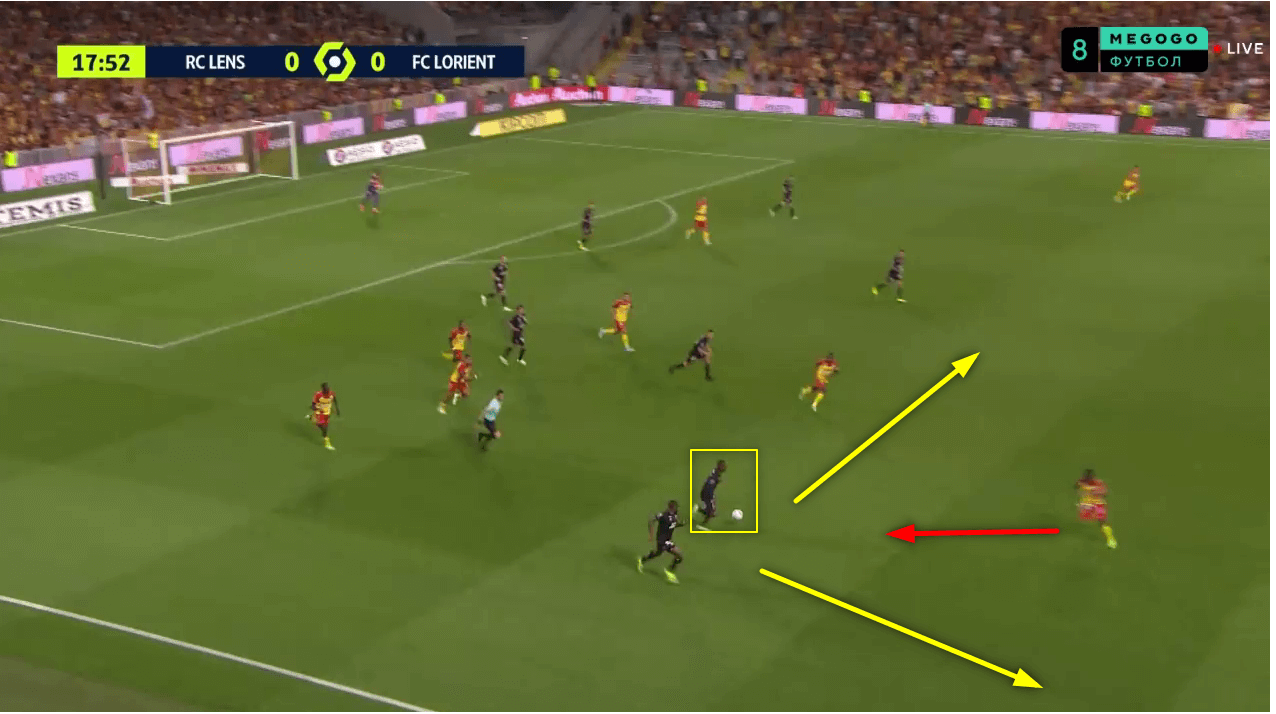 A defensive duel is when a player attempts to dispossess an opposition player to stop an attack from progressing. 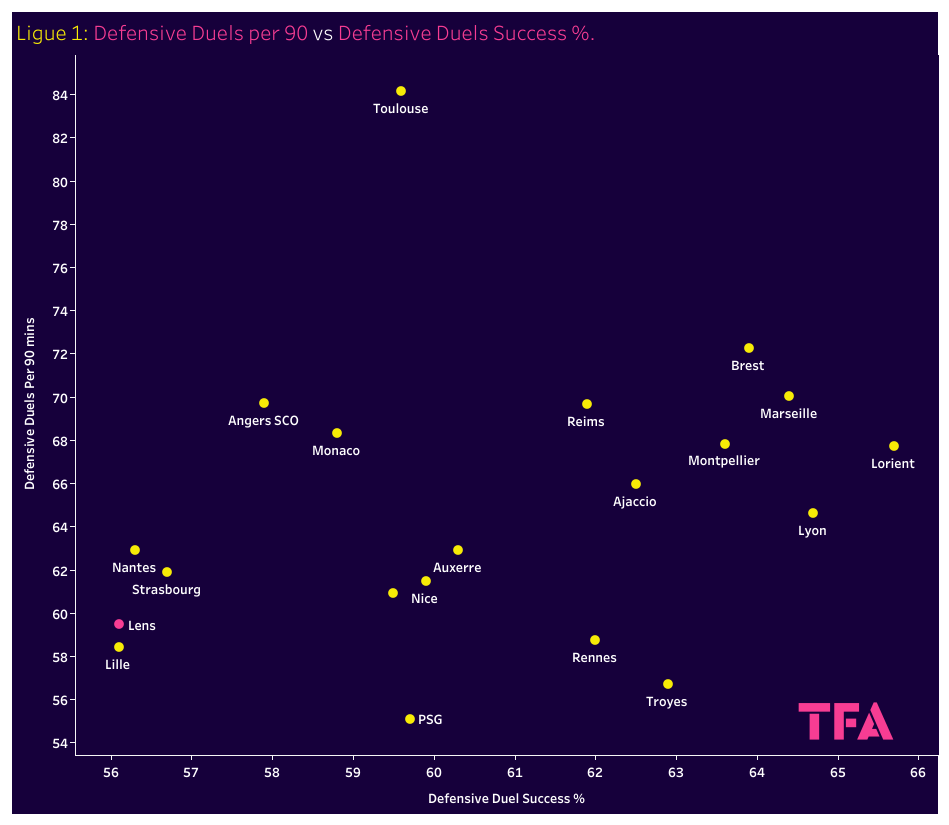 Lens compete in 59.47 defensive duels per 90 minutes and are successful in 56.1% of them. They have the second least success rate in Ligue 1.

Lens have one of the biggest and most exciting fanbases in the whole of France and when they hear Franck Haise say: “We had a great season last season because we finished seventh and confirmed what we did in the previous campaign. We finished seventh with sixty-two points, five more than the previous season. And yet it was not enough to qualify for Europe. When you look at the six teams who finished above us, that makes sense. You had five big clubs in the top five and then Strasbourg, who are a similar team to us. But we are setting no limits this time,” they will have been delighted as, even though the club will have its limitations when competing with the higher profile clubs, the mentality to want to compete is there.

This analysis has shown how the tactics used by RC lens this season have influenced the start they are enjoying. We have shown how they approach each phase of play and identified their strengths and weaknesses as a team.