European U-21 Championship 2021: Rosters and key players to look out for in Group B

Ones to watch: Aljoša Matko and Tamar Svetlin 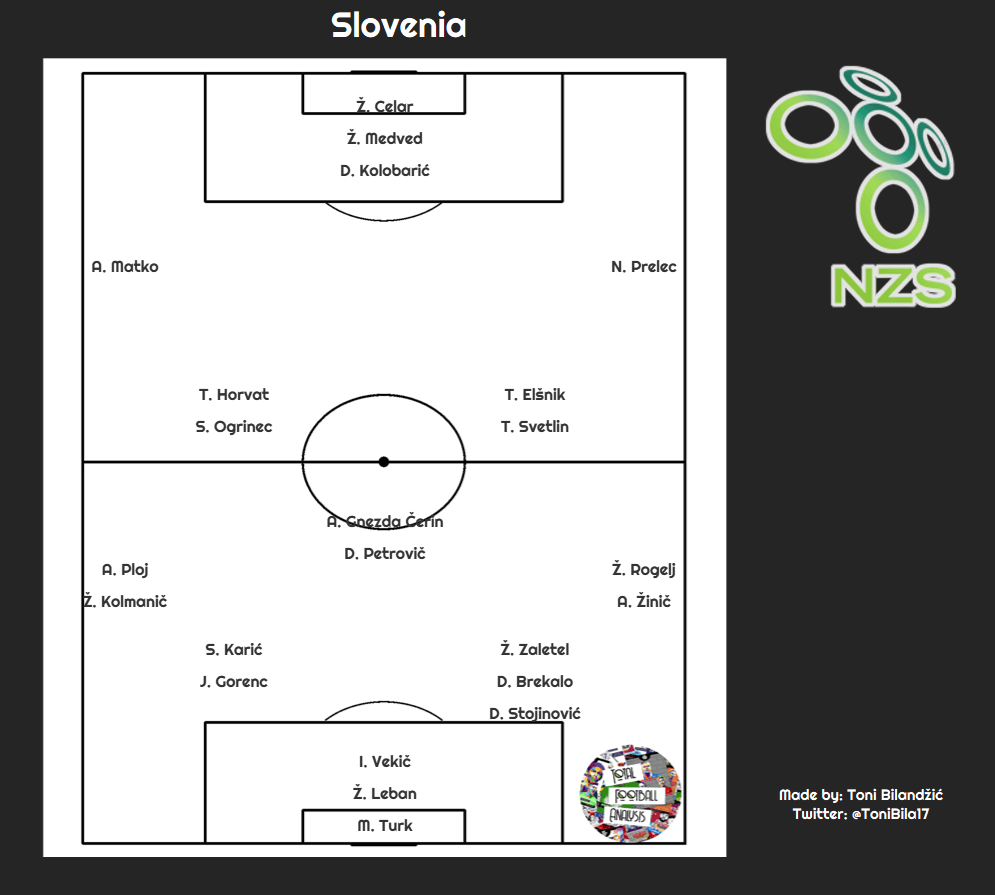 Slovenia did not play the qualification phase for this tournament, since they are the hosts, which has raised a lot of questions around their capabilities in being able to match the other teams in their group. Slovenian legend Milenko Ačimovič was appointed as head coach for the U-21 side, but the lack of fixtures has meant that he is still not sure if they will start with a four or three-man defence, among other tactical and personnel decisions. There has already been some controversy in this regard with the decision to not call up Jan Mlakar, the 22-year-old striker who is on loan at Maribor from Brighton and Hove Albion. However, Ačimovič has stated that he went for Dario Kolobarić instead, since Mlakar has not been able to return to form following a positive test for COVID-19. Igor Vekič, who is the starting goalkeeper for NK Bravo, is expected to start between the posts here as well. It is also interesting to note that they have young talented backups in Martin Turk (17) and Žan Luk Leban (18) who are at Parma and Everton respectively. Slovenia has produced some high-quality goalkeepers such as Jan Oblak and Samir Handanovič in recent years, and that trend looks to be continuing.

Žan Zaletel and Sven Karić should start at centre-back, with David Brekalo and Jan Gorenc as options if Ačimovič decides to play with three centre-backs. The left-back should be Aljaž Ploj, but Žan Kolmanič is also a very good player and he has sealed a transfer to MLS side Austin FC this winter as well. The WSG Tirol right-back Žan Rogelj should be the starting option on the right side of the defence, but he can play as a right-winger as well. Timi Max Elšnik will lead the midfield, supported by the likes of Adam Gnezda Čerin, Tomi Horvat, Dejan Petrovič and Tamar Svetlin. Elšnik has developed well since leaving Championship side Derby County, and this will be a good opportunity for him to draw attention abroad once again. Aljoša Matko and Nik Prelec will probably feature on the wings, or one of them will partner Žan Celar in attack if they play in a 3-5-2 formation. Celar and Matko are the players who will be monitored quite closely. Slovenia are not expected to deliver any great results, but this will be a good chance for them to draw more attention to their domestic league.

Ones to watch: Gianluca Scamacca and Tommaso Pobega 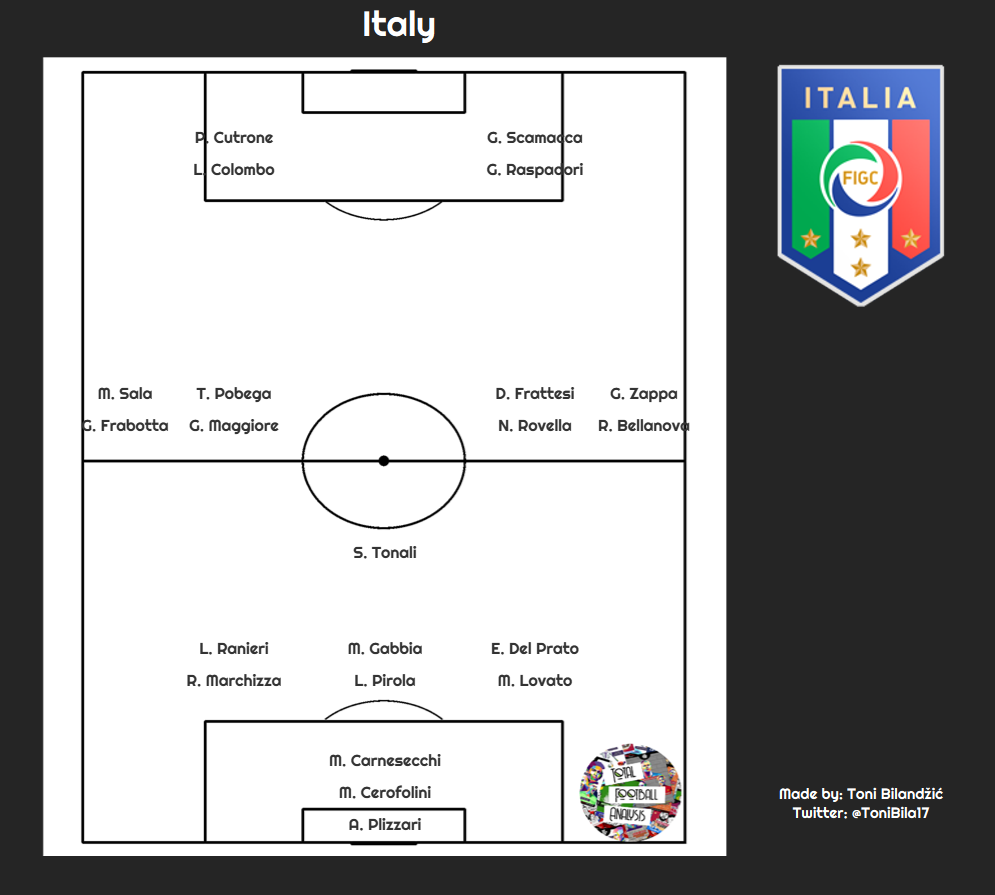 Italy preferred to play in a 3-5-2 in the qualification phase and their roster indicates that they will continue doing the same in the tournament proper as well. They conceded only five goals in 10 matches which is not surprising given the squad at their disposal. Marco Carnesecchi is the starting goalkeeper, who is on loan at Cremonese from Atalanta. Both backup goalkeepers are also on loan in Serie B from Serie A teams Roma and Fiorentina. The defence will feel the absence of Inter Milan‘s talented centre-back Alessandro Bastoni, but they have enough depth in that position. Luca Ranieri, Matteo Gabbia and Enrico Del Prato could be the starting trio, but Riccardo Marchizza and Matteo Lovato have the quality to be starters as well. Marco Sala is the preferred option on the left side while Gabriele Zappa will probably occupy the right side of the pitch. AC Milan midfielder Sandro Tonali is expected to pull the strings from the centre of the park, while a late injurt to Samuele Ricci has opened up a spot for one of Davide Fratessi, Nicolò Rovella, Tommaso Pobega and Giulio Maggiore, and it will be interesting to see how manager Paolo Nicolato will distribute playing time for those players alongside Tonali. Ricci was someone we wanted to highlight as one to watch and it is a big blow for Italy to see him injured. Patrick Cutrone is the captain and he already has a lot of experience at the senior level which could be an advantage for him playing against some relatively inexperienced defenders in the tournament. Gianluca Scamacca will probably be Cutrone’s partner in attack with Giacomo Raspadori and Lorenzo Colombo as their backups. PSG forward Moise Kean will not feature because he has been called up to the senior side, while Riccardo Sottil will miss the tournament due to a thigh injury, and Andrea Pinnamonti has tested positive for COVID-19. Tonali’s presence is very important for this team, especially without Manuel Locatelli in the squad. 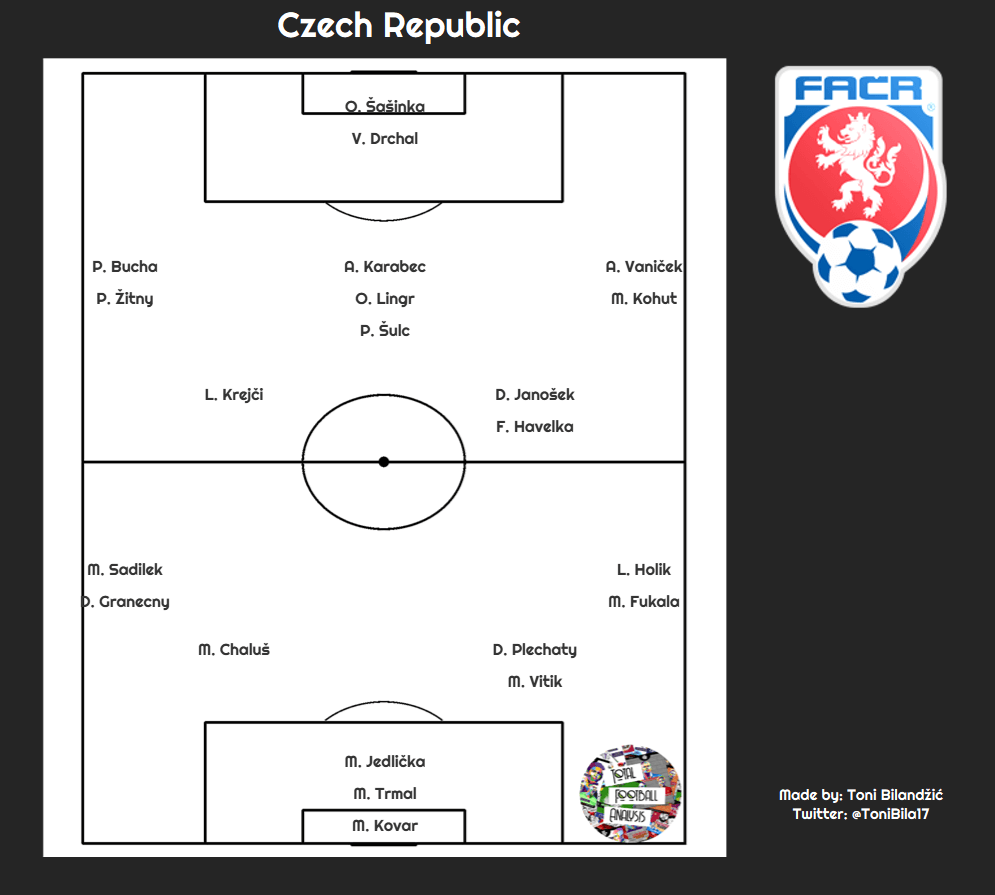 The Czech Republic had one of the best defences throughout the qualifications, conceding only four goals in a tough group with Croatia, Greece and Scotland. They are also one of the teams that can switch between a 4-2-3-1 and a 3-5-2 quite easily, and this tactical flexibility will be something to keep an eye out for. Michal Sadilek and Ladislav Krejči’s versatility allows them to switch between systems within matches, with Krejči being able to play at centre-back and midfield and Sadilek naturally being a central midfielder, but capable of being used at full-back as well.

The Dunajska Streda keeper Martin Jedlička should start over Vitoria Guimaraes keeper Matouš Trmal and Manchester United keeper Matěj Kovar. Matěj Chaluš and Dominik Plechaty will be the starting pair at centre-back if Krejči features in midfield, while Sadilek and Libor Holik will be the starting full-backs. Czech Republic have a lot of midfielders who can play in multiple positions, but the starting midfield should feature Krejči and Dominik Janošek behind Adam Karabec. Of course, the Czech Republic will miss their top talent Adam Hloužek who is not in the squad. The front trio will probably be Pavel Bucha as the left-winger, Antonín Vaniček on the right and Ondřej Šašinka in the centre-forward role. Janošek was crucial during the qualification rounds, and could be worth monitoring in the tournament along with the 17-year-old Karabec. This team is capable of springing a  surprise in this group because they do not have anything to lose with two strong opponents, and could be an interesting team to watch out for.

Ones to watch: Adrià Pedrosa and Javi Puado 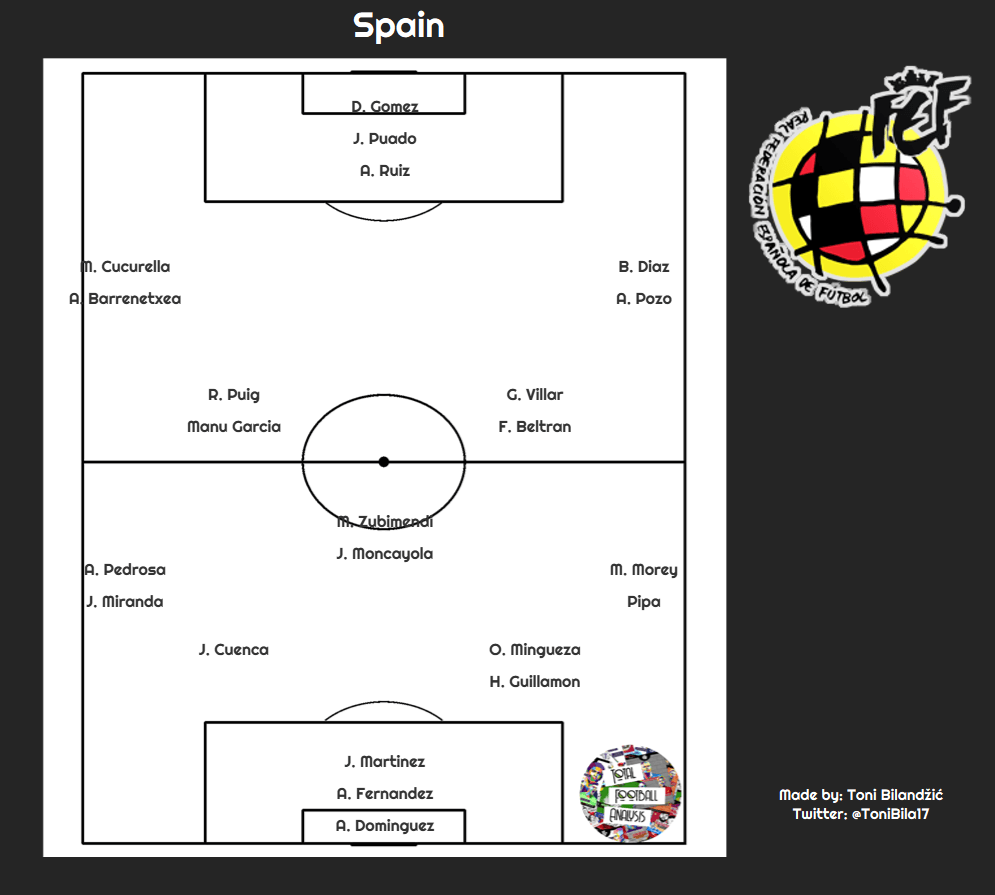 The Spain squad has impressive depth when we look at just those players who are not a part of this squad: Petro Porro, Eric Garcia, Dani Olmo, Oscar Rodriguez, Ferran Torres, Bryan Gil, Carles Perez, Pedri and Ansu Fati. Most of them have been called up to the senior side, highlighting their quality, as well as the level of depth in the Spain system since their replacements are also at a very good level.

The RB Leipzig backup goalkeeper Josep Martinez could start between the posts, however Fernandez was mostly used in the qualifications. Adrià Pedrosa, the left-back was impressive in the qualification rounds, and he could be a breakout star for this team in the tournament. However, he also faces tough competition in Juan Miranda for the left-back position who could be a starter too given his quality. Oscar Mingueza, Jorge Cuenca and Hugo Guillamon are the centre-back options. Mateu Morey got his first call-up after some impressive performances for Borussia Dortmund in Bundesliga, with Pipa as his backup while Alejandro Pozo also can play at right-back, but Luis de la Fuente has usually used him on the right-wing. Their midfield has some outstanding young players: Martín Zubimendi, Riqui Puig, Gonzalo Villar, Jon Moncayola, Manu Garcia and Fran Beltrán. It will be interesting to see how much playing time each one of them gets, but Zubimendi, Puig and Villar could be the starting trio. Brahim Diaz, Ander Barrenetxea and Marc Cucurella are quality wing options with Pozo and Puado capable of playing there as well. All three wingers can be difference makers for this squad, however only Cucurella is a regular starter for his club. Dani Gomez, Abel Ruiz and Javi Puado are the centre-forward options which is the only position where they do not have relatively high profile players, but maybe this tournament will change that. It is expected that they will easily qualify for the knockout phase.

Defending champions Spain and Italy are accompanied by the Czech Republic and hosts Slovenia in group B. Spain have the quality to defend their title while Italy can always surprise anyone in the knockout phase, but their primary goal now is to qualify for the knockout phase. Slovenia will have a similar objective to co-hosts Hungary in wanting to show the level of talent in their domestic league, while the Czech Republic could be a tough challenge for Spain and Italy given the talent at their disposal and if they can manage to carry forward the strong defensive form they showed in the qualification rounds.

To read about Group A click on the link: