European U-21 Championship 2021: Rosters and key players to look out for in Group A

Ones to watch: Youssoufa Moukoko and David Raum 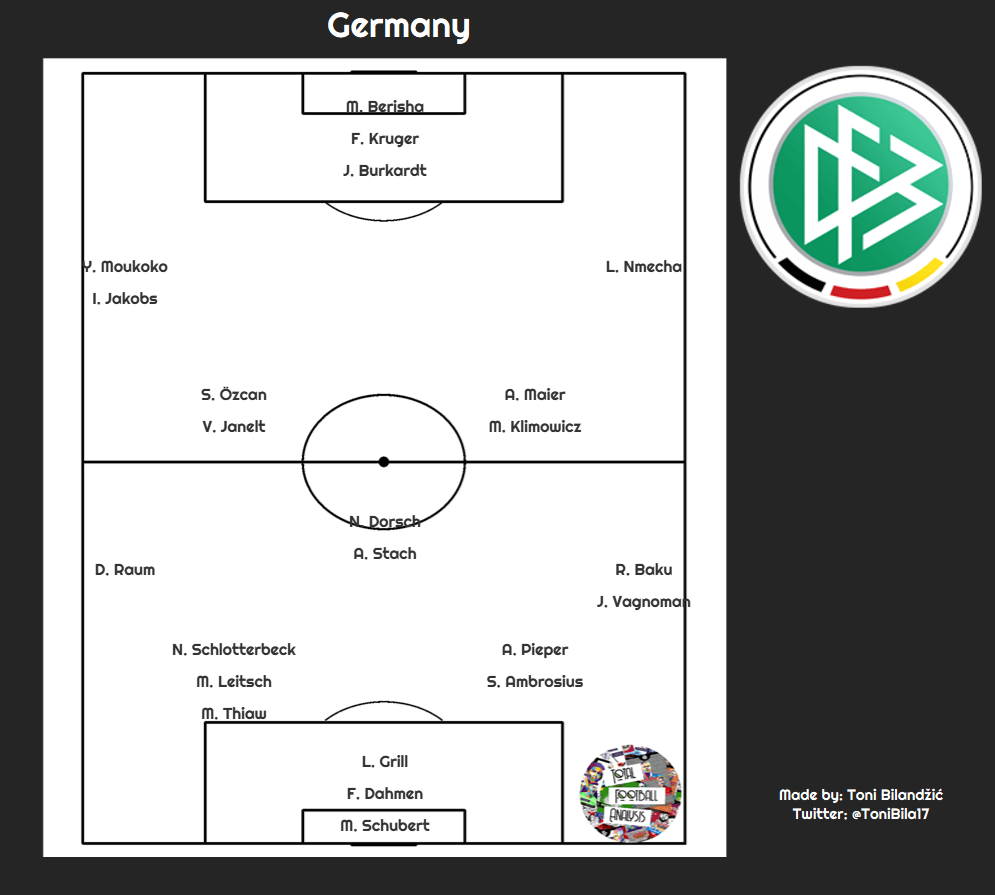 Germany have some impressive players in their roster and they also have a more ‘’experienced’’ squad, with only five players born in or after 2000. We expect them to start with Lennart Grill of Bayer Leverkusen as the first-choice goalkeeper, while the centre-back pair in front of him should be Nico Schlotterbeck and Amos Pieper. They have very good depth at centre-back with Maxim Leitsch and Stephan Ambrosius along with Malick Thiaw, the talented Schalke 04 youngster. Ridle Baku and David Raum are probably one of the best full-back pairs in the tournament, and both of them can make an impact in the attacking phase as well. Arne Maier, who is currently on loan at Arminia Bielefield from Hertha Berlin, will captain the side, while Niklas Dorsch and Salih Özcan were his most frequent partners during the qualification phase, but we expect Vitaly Janelt and Mateo Klimowicz to get minutes as well. In attack, they have a lot of quality players who are versatile enough to play both on the wings or in central roles. Lukas Nmecha was a stand-out performer in the qualification matches and will be a key player in this tournament. Youssoufa Moukoko and Mergim Berisha are already making a name for themselves for Borussia Dortmund and Red Bull Salzburg respectively, and they are expected to join Nmecha in the attack. Some notable names that miss out are the Bundesliga youngster Florian Wirtz, who has been called up to the senior German side, and Felix Passlack who was a part of the squad in the qualification phase but misses out here. The Hoffenheim midfielder Dennis Geiger will also miss the tournament due to an injury. 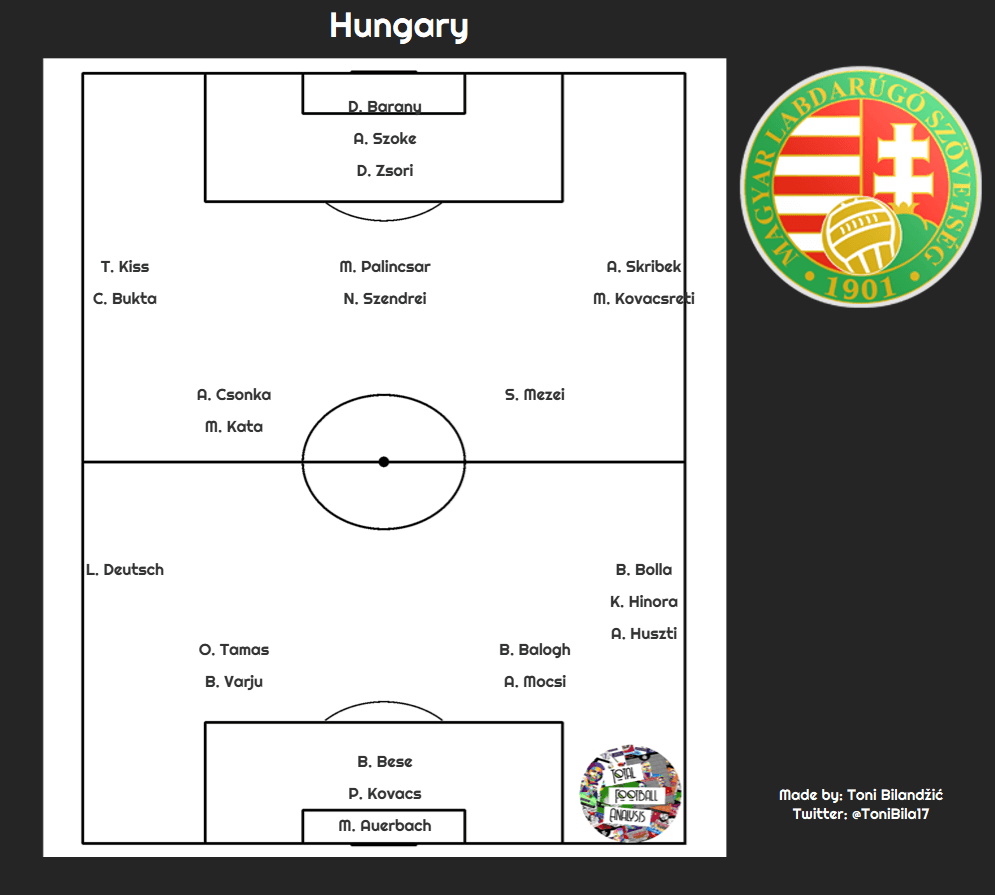 The Hungarian roster doesn’t feature many well-known names. However, this tournament could be a great opportunity for the promotion of the Hungarian domestic leagues given the fact that only three players play outside Hungary. Balázs Bese should start between the posts because their starting goalkeeper Patrik Demjén has been ruled out due to COVID-19, which will be a big hit for the team. Balogh Botond and Bolla Bendegúz are a vital part of the defence with Olivér Tamás and László Deutsch filling the other two spots. Martin Palincsár could start as an attacking midfielder in front of András Csonka and Szabolcs Mezei. The wingers, Tamás Kiss and Alen Skribek are players who will be monitored closely by scouts and they will have to do the heavy lifting in the attack if Hungary is to reach the knockout phase. Donát Bárány should start as the central striker and he is worth monitoring in this tournament as he is in the middle of a very good season for Debreceni so far, with 21 goal contributions in 25 appearances at the time of writing.

Ones to watch: Brian Brobbey and Noa Lang 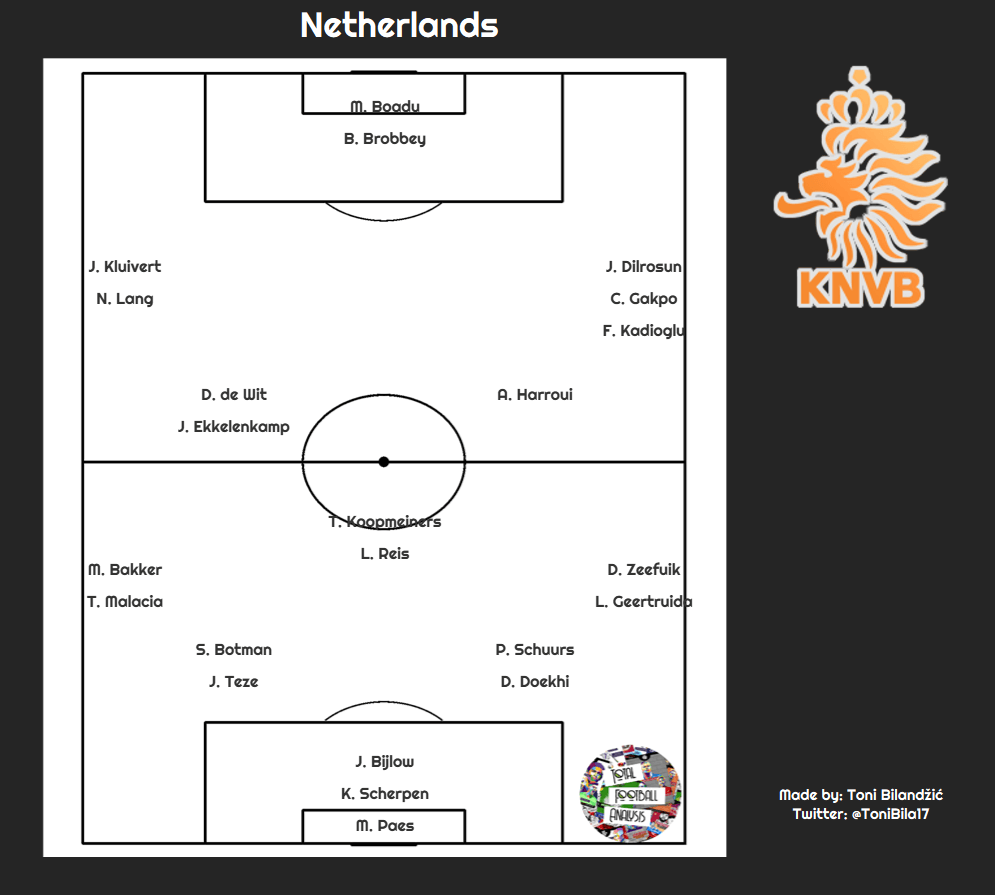 Even without Ryan Gravenberch, Owen Wijndal and Calvin Stengs, who are all on duty with the senior Netherlands side in this international break, the U-21 side is still extremely talented and well-balanced and is considered one of the favourites for the tournament. The starting goalkeeper will be Feyenoord’s 23-year-old Justin Bijlow with Kjell Scherpen from Ajax and Marvin Paes from Utrecht as his backups. Mitchell Bakker, Sven Botman, Perr Schuurs and Deyovaisio Zeefuik will form a very strong back four, where Wijndal’s absence, in particular, will not be felt given the options at left-back – PSG hot-prospect Bakker as well as Feyenoord’s Tyrell Malacia. AZ Alkmaar captain Teun Koopmeiners will start in the heart of the midfield, with Abdoui Harroui and Dani de Wit likely to start ahead of Ludovit Reis and Jurgen Ekkelenkamp. The Netherlands are stacked on the flanks, with all their wingers valued at over 10 million euros on Transfermarkt, except Ferdi Kadioglu. There will be a lot of rotation in these three matches, with Justin Kluivert likely to be one of those in the XI from the start, with one of Cody Gakpo and Javairo Dilrosun to be picked on the opposite flank. In attack, Jong Oranje possess some deadly finishers: the AZ forward Myron Boadu and the new RB Leipzig signing who will join them from Ajax in the summer, Brian Brobbey. The Utrecht centre-back Justin Hoogma will miss the tournament because of an ankle injury, but the availability of Koopmeiners, Kluivert, Boadu and Botman for the U-21 side adds a lot of quality to the Netherlands’ lineup.

Ones to watch: Alexandru Matan and Radu Drăgușin 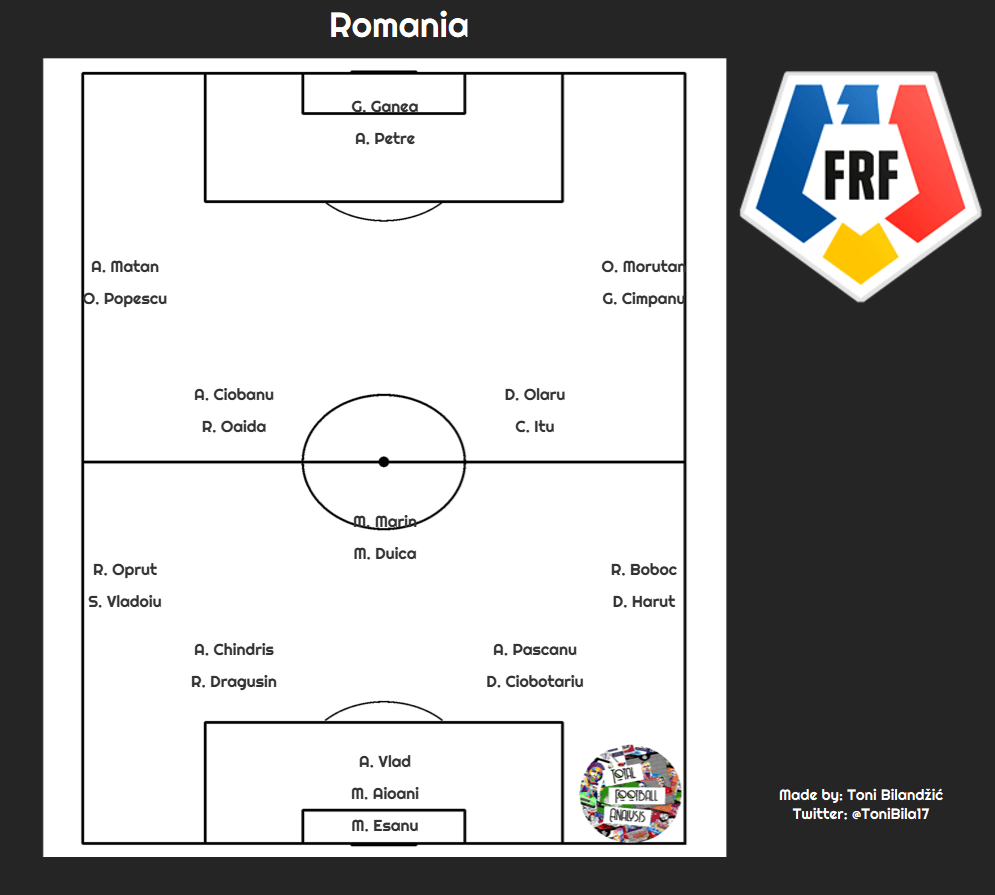 Romania enter this tournament without their best players, which is such a shame given the quality of those players. However, this is understandable since they have all been called up to the senior side. The likes of Ianis Hagi, Dennis Man, Valentin Mihăilă and Florinel Coman, who were the offensive force of this U-21 squad during the qualifications will be missing as a result, with Alexandru Matan, Olimpiu Morutan and Darius Olaru having to try to fill the void left in their absence. FCSB goalkeeper Andrei Vlad will have a big opportunity to show his talent on a big stage, coming up against the likes of Boadu, Nmecha, Berisha and Kluivert in the group stage. It will also be interesting to see if Juventus hot prospect Radu Drăgușin will start at centre-back, since Andrei Chindris and Alexandru Pascanu were head coach Adrian Mutu’s preferred options during the qualification phase. Radu Boboc and Denis Harut are very good options at right-back with Boboc having a slight advantage for the starting spot. Raul Oprut is the starting left-back, with the right-back Stefan Vladoiu serving as his backup. Andrei Ciobanu, Marius Marin and Darius Olaru will be crucial for Romania in midfield as the ones responsible for creation, while we have already spoken about Morutan and Matan having to step up in the absence of the likes of Hagi and Coman on the flanks. Morutan is likely to draw attention from bigger clubs if he performs well given the already high expectations around the FCSB player. Matan, on the other hand, has already made a move to MLS side Columbus Crew this month. George Ganea and Adrian Petre will fight it out for the starting centre-forward position.

This group has two teams that will look to challenge for the title, Netherlands and Germany while the other two teams are Romania and hosts Hungary. All of the teams in this group are missing some key players, but it is hard to see Hungary and Romania getting past the group stage. However, both teams will fight each match trying to get points against the favourites, which should make this an interesting group to keep an eye on. 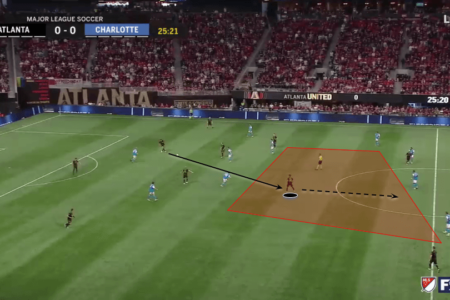 We’re already three matchdays into MLS 2022 and it already looks like we have an exciting season ahead of us. […] 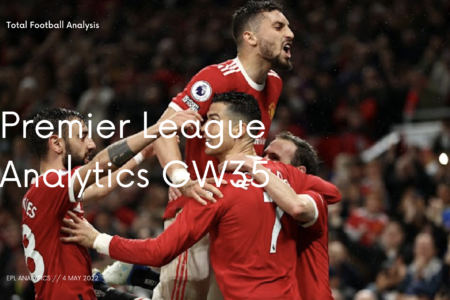