European U-21 Championship 2021: Rosters and key players to look out for in Group C

Ones to watch: Colin Dagba and Amine Gouiri 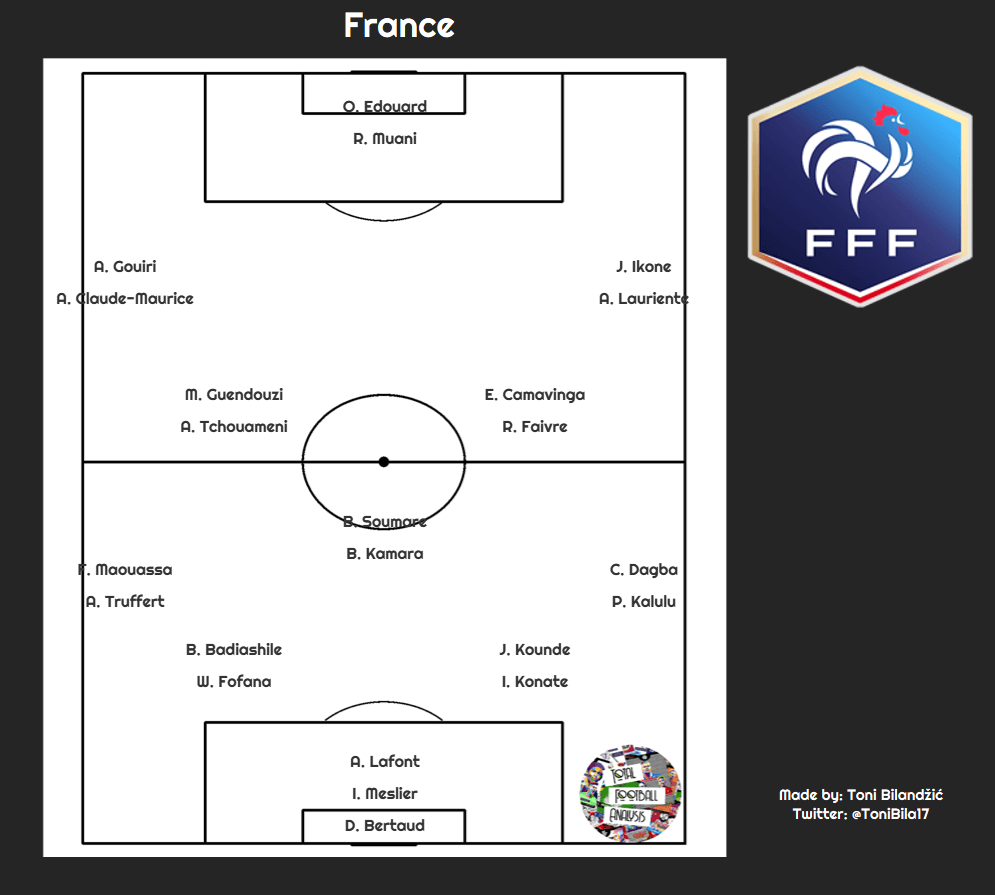 France are one of the favourites to win this tournament given the quality they possess in their squad. They are a well-balanced team with depth in each position, and this team is stacked with players who have already proved themselves at senior level for their clubs across Europe. France suffered a late blow with the withdrawal of Houssem Aouar and Moussa Diaby while Dayot Upamecano, Dan-Axel Zagadou and Jeff Reine-Adelaide could also not be called up due to injuries. Despite this, they still have a fantastic squad, as we will see.

France has two top options for the goalkeeper position – Alban Lafont was Sylvain Ripoll’s preferred choice during the qualification rounds, but Illan Meslier has been impressive for Leeds United in the Premier League this season, and it wouldn’t be a surprise to see him picked as the first choice.

The quality they possess in the centre-back positions is enviable , with Jules Koundé, Benoît Badiashile, Ibrahima Konaté and Wesley Fofana together worth over €150 million according to Transfermarkt, which is more than the entire squad value of most of the teams in this tournament. It is hard to predict who will start, but Koundé and Badiashile could be the main pair. Badiashile gets the advantage in the left centre-back position because he is left-footed. The fight for the left-back spot will be between Stade Rennais teammates Faitout Maouassa and Adrien Truffert while at right-back we are likely to see Colin Dagba of PSG. In midfield, there are a lot of quality players who could be starters, but we will assume they will start with the biggest star in the squad, Eduardo Camavinga, along with Mattéo Guendouzi and behind this duo, any one of Boubakary Soumaré, Aurélien Tchouaméni and Boubacar Kamara could be the defensive midfielder. Jonathan Ikoné, Amine Gouiri and Odsonne Edouard will probably be the starting attacking trio. Each one of them has the individual ability to make a difference, but Edouard could be pushing to top the goalscoring charts given his quality and finishing ability, especially if France make it to the latter stages of the tournament.

Ones to watch: Arsen Zakharyan and Aleksandr Maksimenko 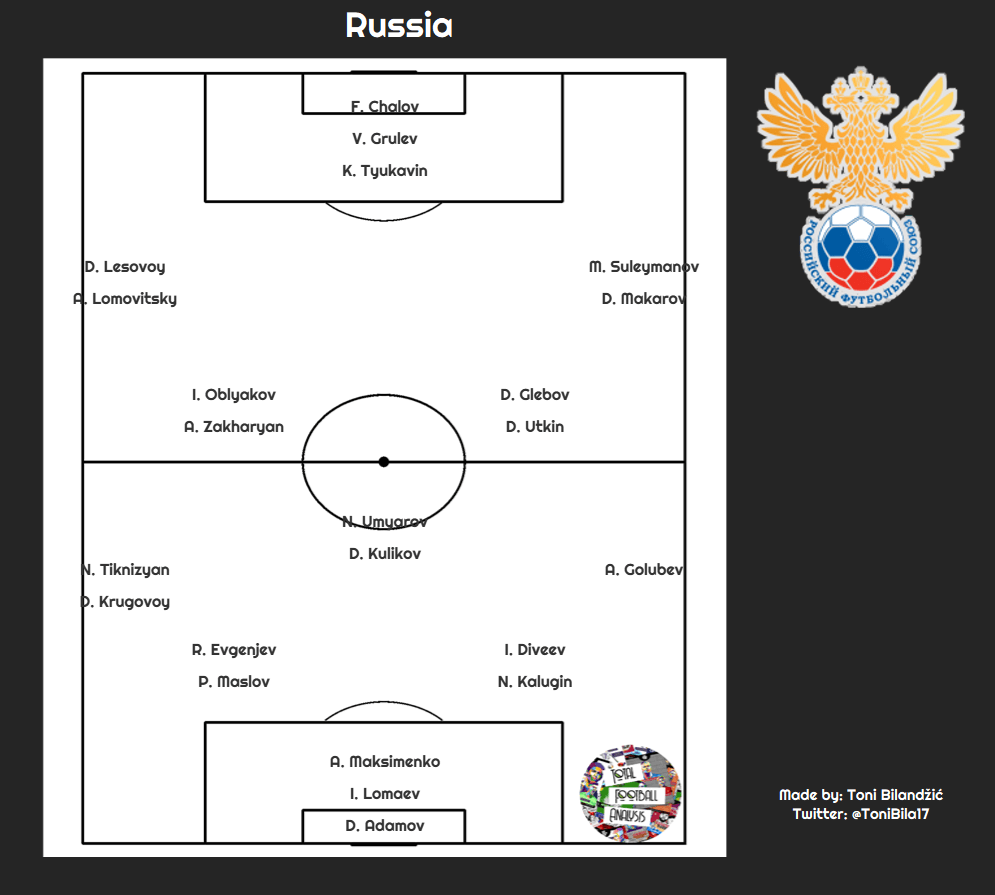 Russia had an impressive record in the qualification stage, conceding only four goals, and their defence is at a high level. It is unfortunate that their first-choice goalkeeper Matvey Safonov is not yet fit enough to play in competitive matches following his return from injury, but this is a position where Russia have another top-class option in Aleksandr Maksimenko, who will start with the gloves. Given the depth in defensive positions, they can switch between a four-man and three-man defence, with Igor Diveev and Roman Evgenjev likely to be key players at centre-back. Nikolay Rasskazov did not get a call-up which was a controversial call, since they do not have another natural right-back in the squad. Because of this Artem Golubev or Nikita Kalugin will have to fill the right-back slot. At left-back, Nair Tiknizyan from CSKA Moscow and Danil Krugovoy from Zenit are the two options.

In midfield, Ivan Oblyakov is a key man and their captain, while Nail Umyarov, Danil Glebov, Danii Utkin, Daniil Kulikov and Arsen Zakharyan are the other options. Zakharyan is the youngest player in the squad and it will be interesting to see if he gets enough playing time. He can play as an attacking midfielder, but also on the flanks. Daniil Lesovoy will be the starting left winger, but there is a big question over on the opposite flank, with two quality options in Shapi Suleymanov and Denis Makarov. The starting centre-forward will be Fedor Chalov who is the biggest star in this team; he has scored 10 goals in 20 appearances for the Russian U-21 team already. However, he is not having the best season for CSKA Moscow, but he could change that by performing well in this U21 European Championship.

Ones to watch: Ísak Bergmann Jóhannesson and Andri Fannar Baldursson 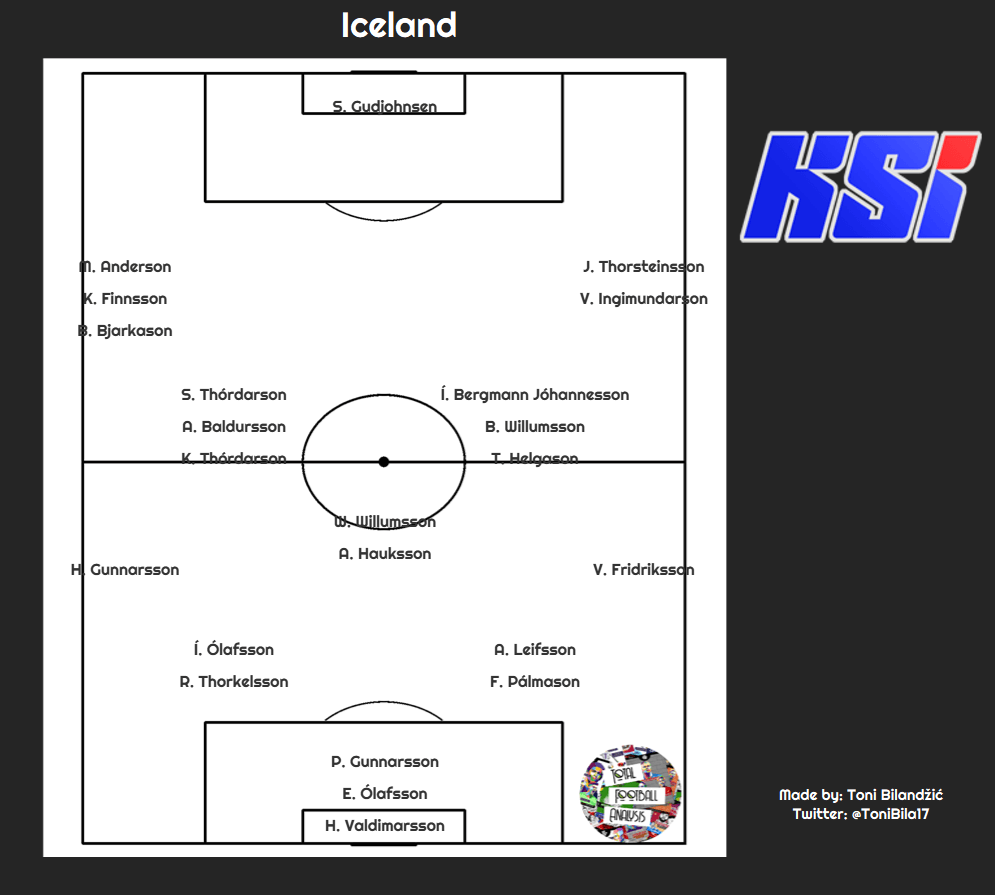 The Iceland squad is entering the tournament after finishing 2nd in their qualification group, ahead of the Republic of Ireland and Sweden. They have been producing some interesting and talented young players in recent years and it will be fascinating to see which players will stand out in this tournament.

The first player who could stand out is Patrik Gunnarsson, the 20-year-old Silkeborg goalkeeper who will be their man between the sticks. The centre-back duo will be Ísak Óli Ólafsson and Ari Leifsson, with Róbert Orri Thorkelsson and Finnur Tómas Pálmason as their backups. Ólafsson and Pálmason are playing in Iceland’s domestic league. Hördur Ingi Gunnarsson and Valgeir Lunddal Fridriksson should be the starting full-backs, but they do not have any natural backups in the squad.

Iceland have produced some quality hard-working midfielders over the years, and this year we will have the opportunity to see some emerging talents in this area of the pitch as well. Willum Thór Willumsson should be a starter in the midfield along with two of these four: Stefán Teitur Thórdarson, Alex Thór Hauksson, Ísak Bergmann Jóhannesson and Andri Fannar Baldursson. Baldursson has already appeared in Serie A for Bologna while Bergmann Jóhannesson is their most valuable player, according to Transfermarkt. Sveinn Aron Gudjohnsen, son of the legendary Chelsea and Barcelona forward Eidur Gudjohnsen, will be the starting centre-forward, and again they do not have a natural backup for him. Jón Dagur Thorsteinsson, who is one of their best players, can be expected to start on the flanks, while Mikael Andersen is likely to get the nod over Bjarki Steinn Bjarkason on the opposite wing.

Ones to watch: Jesper Lindström and Mohammed Daramy 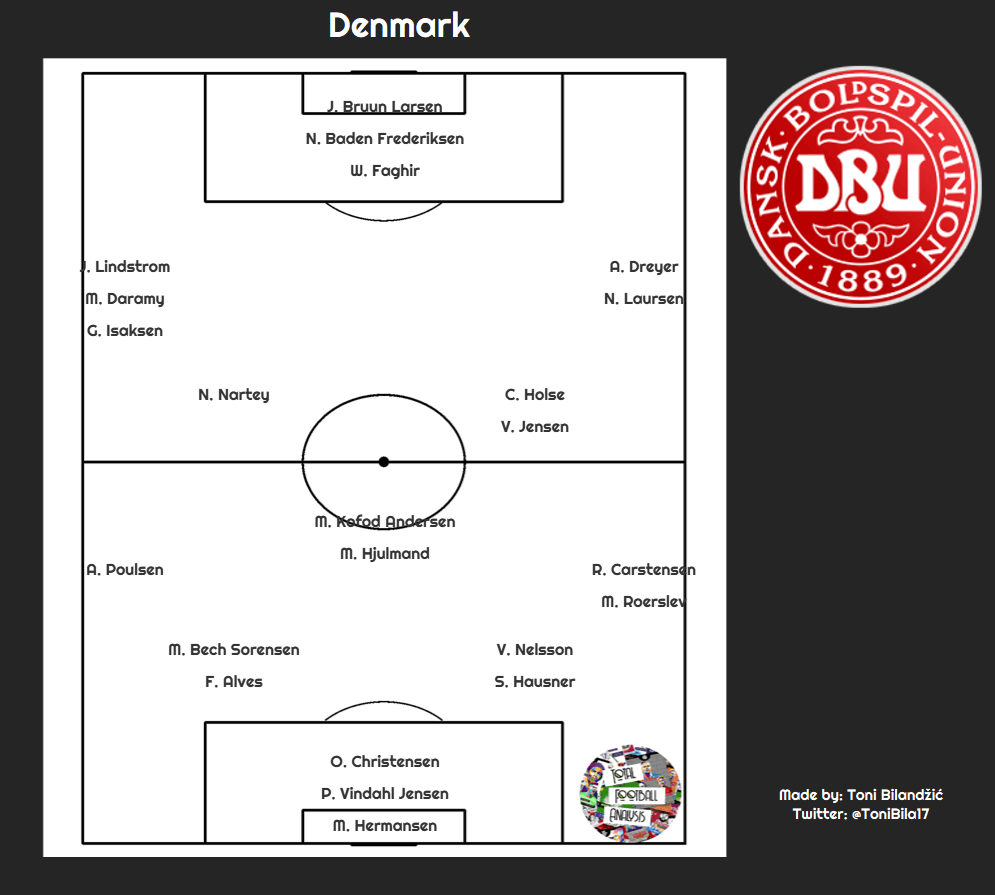 Denmark had one of the strongest performances in the qualification phase, dominating their group with eight wins and two draws without a single loss. They will miss their best two players: Mikkel Damsgaard and Andreas Skov Olsen who are part of the Denmark senior team in this international break.

We expect Victor Nelsson and Mads Bech Sörensen to be the starting centre-back duo; Nelsson will be monitored by scouts because he is every bit a modern centre-back with very good ability on the ball. Andreas Poulsen will be the starting left-back, while at right-back Mads Roerslev Rasmussen and Rasmus Carstensen are the possible options, with Carstensen possibly getting the nod due to the fact that he has been a regular for his club side this season. It is interesting to note that Sörensen and Rasmussen both play for Brentford in the Championship. Magnus Kofod Andersen and Nikolas Nartey should start in midfield, but the identity of the third midfielder in the lineup is still up in the air, with one of the more offensive players like Carlo Holse, Victor Jensen or Jesper Lindström expected to fill that slot. Denmark have some very good wingers with the likes of Anders Dreyer, Mohammed Daramy and Jacob Bruun Larsen all in the squad. Bruun Larsen was usually played at centre-forward in the qualification rounds, while other two centre-forward options have been called up for the first time. Thus, it is likely that Bruun Larsen will be used at centre-forward here as well, as it also opens up a spot for another of Denmark’s wingers to get on the pitch. Anders Dreyer’s presence in the squad is a boost for Denmark given that he has the quality to play for the senior team.

France will almost certainly qualify for the knockout phase, and they are also likely to top their group. Russia, Denmark and Iceland will have to fight it out for the second spot, with Iceland having the weakest squad on paper. However, this group will be interesting to watch, not only for the talented France squad, but for some of the youngsters across the other teams, as well as the chance of an upset or two.