RB Salzburg are clearly the most dominant team in the Austrian Bundesliga with the likes of LASK Linz, Wolfsberger AC and Rapid Vienna being behind them. These are also the teams who represented Austria within the last couple of seasons in the UEFA Champions League and the UEFA Europe League. However, a few years ago, Austria Vienna were also among the very best teams of Austria’s first-tier and besides, they were the last team to not let RB Salzburg win the league as they got to the top of the Austrian Bundesliga in 2012/13. Since then, of course, Salzburg were crowned champions every year. Still, Austria Vienna are at the moment clearly far away from the top teams in the Austrian Bundesliga. Currently, they are in the seventh position after the opening 22 games and therefore won’t even be in the championship play-offs (the first six teams qualify for it).

In this recruitment analysis, we will have a detailed look at Austria Vienna’s signings within the last five seasons to investigate if probably their activity on the transfer market is one of the reasons for their current bad situation and also look at the leagues where they could probably start scouting and recruiting from.

Recruitment in the last five seasons

Firstly, we want to get a basic overview of the recruitment of Austria Vienna within the last couple of years. For this, we look at the done deals within the last five seasons. Considering this, all players who joined them on loan or signed a permanent deal with the club since the summer transfer window of 2015/16 will show up in this analysis (the goalkeeper Ammar Helac who joins them in the upcoming summer from Blau-Weiß Linz will not be included). Also, players who returned from a loan aren’t counted as new arrivals and besides, I will take the signings in the summer and winter together per season to have a better overview.

In the first graph below, we can see the number of signed players, their average age and how many of them are still at the club. 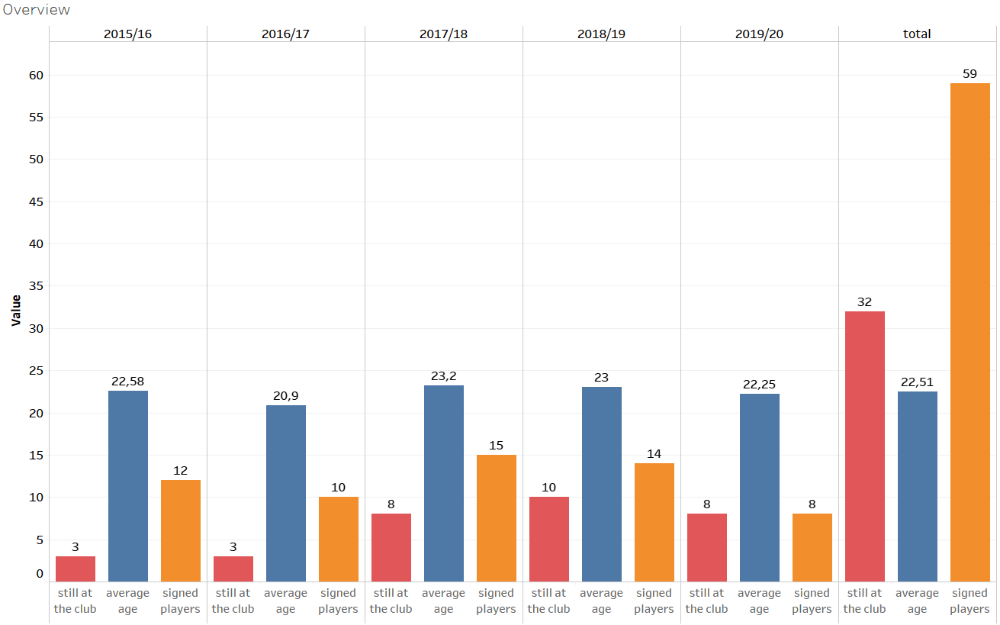 Furthermore, not all of the 32 players who are still with the club are playing for the first team as two are at other clubs on loan and some of them play mainly or exclusively for their second side. With an overall average age of 22.59, we can see that they mainly sign young talents, but in the next graph we will find out the main reason for this low number as then we will see how many talents they added from their own second team to the first squad. In the image below, we can see from which countries they signed the players within the last five seasons. 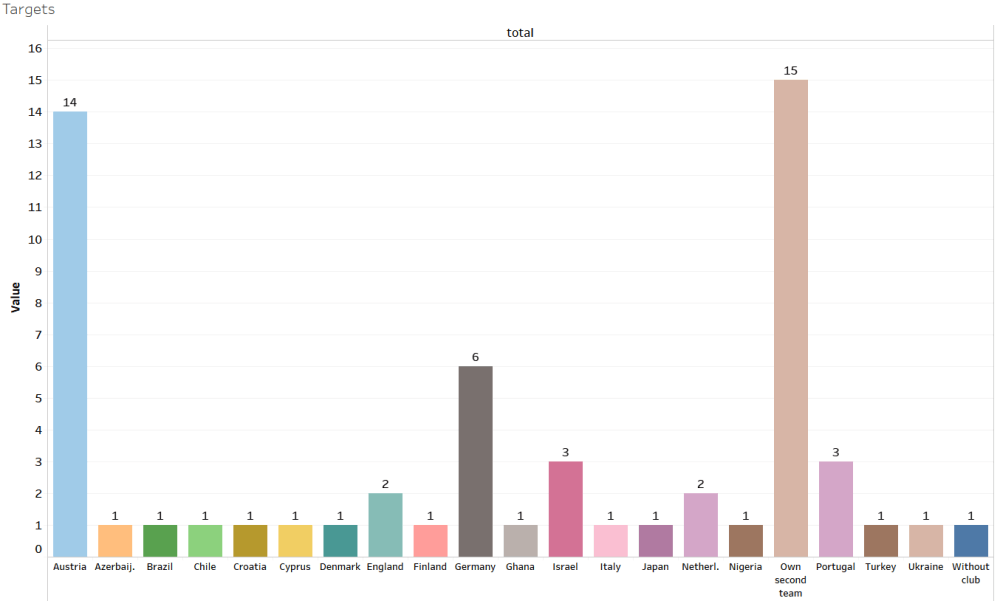 Now, we can see that they signed within the last five years 15 players from their own second team who are mainly players who are 20 years old or even younger. This is also the reason why the average age of their signings is quite low. The second main target to implement new players to the team is Austria and especially the Austrian Bundesliga, which makes sense since these players don’t necessarily need much time to adjust to the new club as they know the league. Also, the German Bundesliga is a preferred target for recruitment with six signings in five years and a great reason for that is that there are players who already play in Germany and don’t have to learn a new language when they come to Austria.

In the next graph, we look at the current squad and some statistics. The goal is to find out more about the group of players which they currently have. In the image below, I have visualised the minutes on the field in this season, the age of the players as well when they joined Austria Vienna. Also, the players who have a cross instead of a dot have missed at least five games due to injuries in the current season.

We can see that Alexander Grünwald and Terkan Seberst are the only two players in their team who joined the team before the season 2015/16 (both from the second team). Considering this, the majority of the players who played for Austria Vienna in this season have not been a part of the team for too long. However, one of the probably most interesting statistics is that nine of their current 28 players had joined them from the second team and additionally the majority of these players had already played in the youth for Austria Vienna. Considering this, you have to give huge credit to Austria Vienna for their great player development. Also, we can see in the graph above that they have a young team with only three players being older than 30 and the majority of the men are 23 years old or younger. Due to that, the team will likely perform better in the upcoming years when these young and talented players reach a higher level and perform well regularly.

Still, we will now use statistics to find leagues in which scouting and recruitment of new players could be interesting since we already saw in the second graph that they brought in players from various countries even though the majority of the players of their current side joined them from their second teams or an Austrian side (17 out of 28).

Where to recruit from

To find new leagues from where they could recruit new and interesting players, we will use four statistics and compare the average values of the Austrian Bundesliga with those of other leagues across the world to find out where the level and style of play could probably be similar.

The first two metrics which we use are the number of defensive duels per 90 minutes and the value for PPDA (passes allowed per defensive action). These two categories tell us a bit about the intensity of the leagues. The Austrian Bundesliga is highlighted in the graph below. 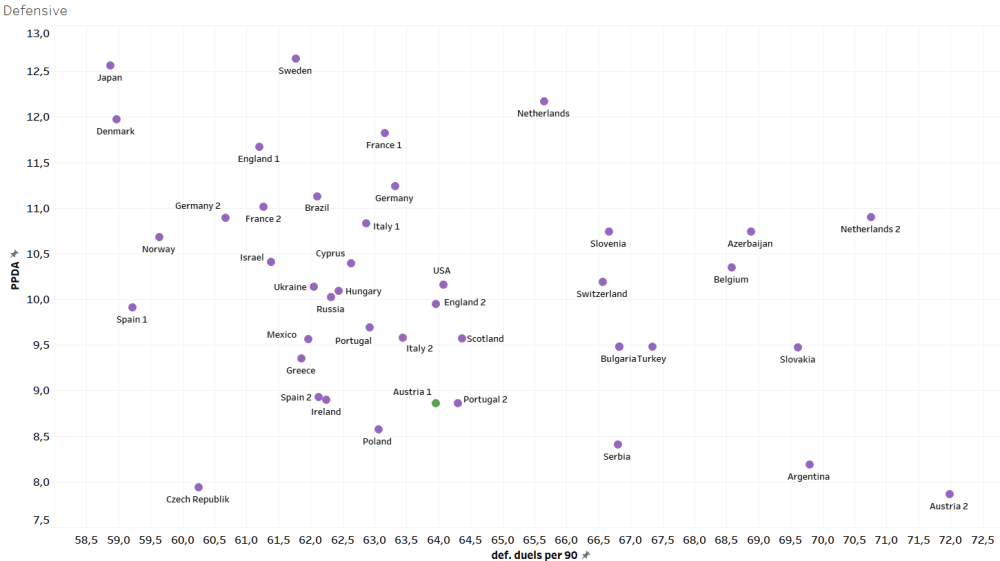 In Austria’s first tier, we can see on average 63.96 defensive duels per team per 90 minutes and the league has an average value for PPDA of 8.86. The second league of Portugal is clearly the one with the most similar values with 64.3 defensive duels per 90 and a PPDA value of 8.86.

Next, we will look at the number of shots per 90 minutes as well as the passing rate (passes per minute of possession). These two categories will tell us more about the tempo in the respective leagues. 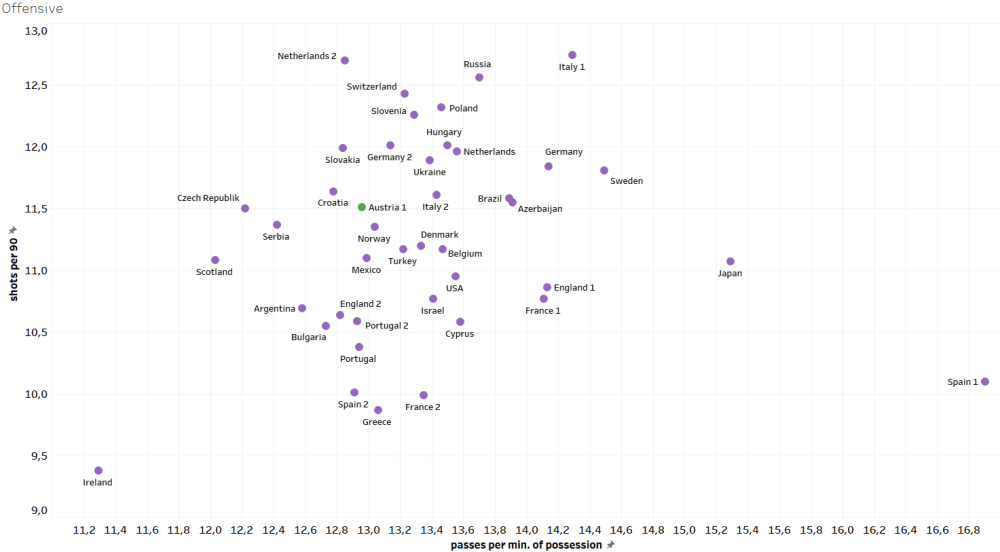 In this graph, the La Liga stands out due to an incredibly high value for the passing rate (16,9) while the Austrian Bundesliga is in the centre among several other leagues. This time, the second division of Portugal is quite far away while the first league of Croatia and Norway have similar values.

Considering this, we didn’t have find a league which has similar values as the Austrian Bundesliga in three or even four categories, but the second league of Portugal, as well as the first divisions of Croatia and Norway, could be interesting.

Interesting players in the second squad

Now, in the final part of this recruitment analysis, we will have a short look at the three most interesting players of Austria Vienna’s second team (also called Young Violets). The Veilchen showed within the last couple of years that they regularly promote talented players to their first team, so why shouldn’t this also be the case in the upcoming summer.

Johannes Handl is one of the best players in Austria’s second division and showed several good performances in this season for Austria Vienna’s second side. He won in this season 80% of his defensive duels, which is the highest value of all players in Austria’s second division. Besides, with 10,98 interceptions per game, he has the highest value in this category for this league and the fact that he plays on average 61.74 passes per game (also best value of the league) shows that he can also be the one who takes care of the build-up for his team.

The 21-year-old is one of the most promising full-backs in the second tier, but Austria Vienna still have two left-backs with Andreas Poulsen returning to Gladbach after his loan this summer. Due to that, it is questionable if he will be promoted in the upcoming season, but he has definitely enough talent as we can see when we look at his stats. With an average value of 2.46 for progressive runs per game, he is among the very best players in this category and additionally he makes 11.44 successful defensive actions per game, which shows us that he is solid offensively and defensively.

Even though the Austrian defensive midfielder is just 18 years old, he is already officially part of Austria Vienna despite only featuring for the second team this season. However, it will be just a matter of time until he gets promoted to the first team. He makes on average 7.72 recoveries per game and 10.15 of his 36.73 passes are forward passes, which already tells us that he is always looking to progress the ball further up the pitch. However, since he is only 18 years old, we will have to wait for the next season and see how he will perform and develop.

All in all, you have to give Austria Vienna huge credit for their decent player development and this could really bring them back up in the table in the upcoming seasons. At the moment, some of their key players are quite young and therefore they will just get better in the future. Dominik Fitz, for example, is already among the best offensive midfielders of the league even though he is just 20 years old and will surely become an incredible player in the future.

However, they should work on their recruitment as they signed players from so many different leagues within the last couple of years that it seems as there is no real consistency. Probably, they should look out for players in some of the leagues which I highlighted. However, to find the absolute perfect league for scouting and recruiting players, you would need to take a higher number of statistics and even then, it is not 100% clear that you would find that one perfect league.