Erling Haaland, Patson Daka and Shon Weissman are the three strikers who received in this season in the Austrian Bundesliga the most attention. While Haaland joined Borussia Dortmund in the winter of this season, Daka and Weissman are linked with several clubs in Ligue 1, Bundesliga and Serie A.

However, Taxiarchis Fountas showed also outstanding performances in this season and was one of the key players for the strong season of Rapid Vienna. The Greek central forward joined them in the summer of 2019 from St. Pölten. When he moved to Rapid Vienna in the summer of 2019 for free, he had a market value of £0.45M and at the end of the 2019/20 season, he is now worth £2.7M according to Transfermarkt showing his incredible season.

In this tactical analysis in the form of a scout report, we will look at the strengths and weaknesses of Fountas, his style of play and how he helps his team.

The two formations which got used mainly in this season by Dietmar Kühbauer were 4-2-3-1 and 3-5-2. Therefore, the Greek striker is used to systems with two forwards as well as being alone upfront. No matter if he is the lone striker or if he has a partner in the highest line, he does not just stay in the centre upfront as he is very mobile and likes to use his pace to get into different spaces. This can also be seen in his heatmap for all his Austrian Bundesliga games in the season 2020/21. 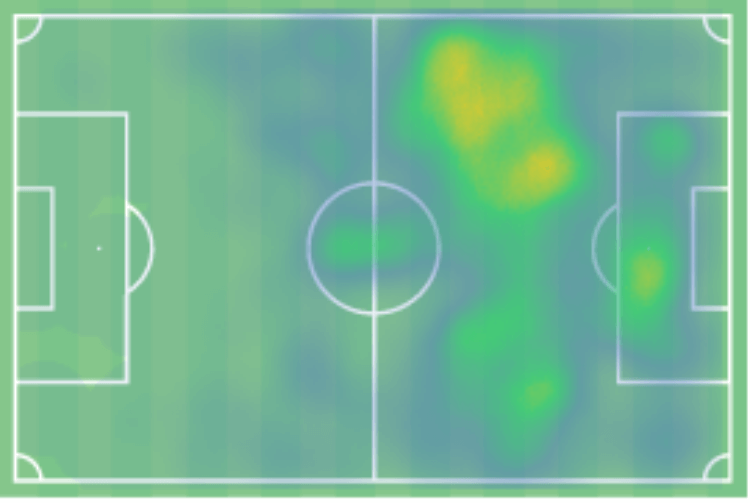 The Greek is for the tactics of Rapid Vienna really important as he tries to help his teammates in several areas on the pitch as we will see later again in this tactical analysis. Anyways, the aspect that he is often positioned in one of the two half-spaces is also because he often drifts out wide to create distance between himself and the opponents.

During the possession phase, he makes more frequently runs to quickly create passing lanes towards him to have little interplays while during the counter-attacks he often moves early to the wide-areas (often already during the defensive phase) to create distance between him and the opponent already ahead of receiving the ball. An example of that can be seen below as intelligently moves to the left half-space during a moment of offensive transition to create space between him and Philipp Wiesinger. 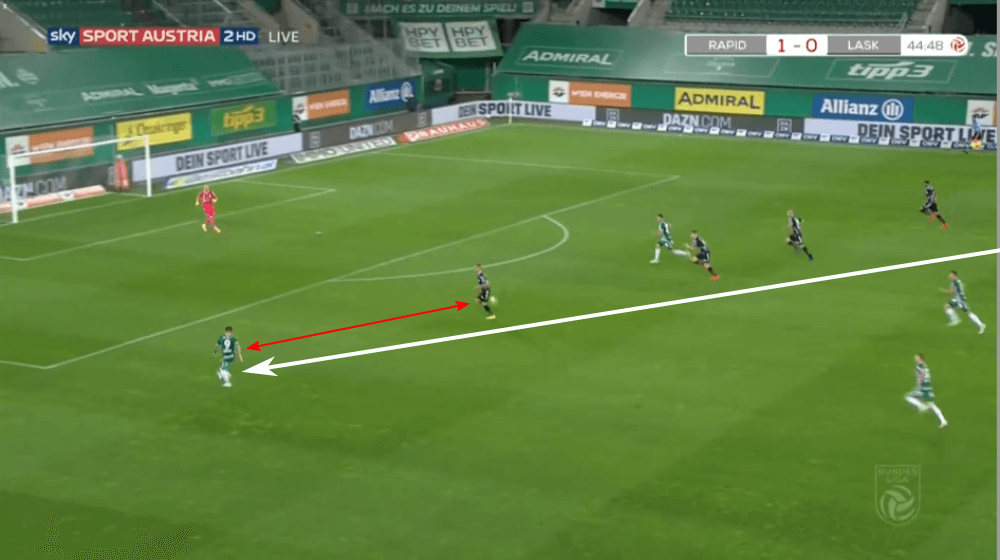 The Greek forward works hard for his team defensively and also sometimes can be found in deeper areas as he helps his teammates to recover the ball. He is on average involved in 4.92 defensive duels per 90 minutes what is an above-average value for a central forward showing that he is ready to work for his team. For comparison, the other big names in this league like Daka (3.16), Hee-chan Hwang (3.74), Weissmann (2.55) or Christoph Monschein (2.64) all compete in way fewer defensive duels per 90. In fact, there are only six other central forwards in the Austrian Bundesliga who have for defensive duels per 90 a higher number (for this comparison I only took strikers with at least 500 minutes on the pitch).

As soon as his team are able to win back the ball, Fountas starts often deep runs to exploit his pace and give his teammates an option for a through pass. In the situation below, we can see an example as he starts from a deeper position as he helped his team during the defensive phase to then start a forward run. In those situations, his pace and acceleration help him massively. 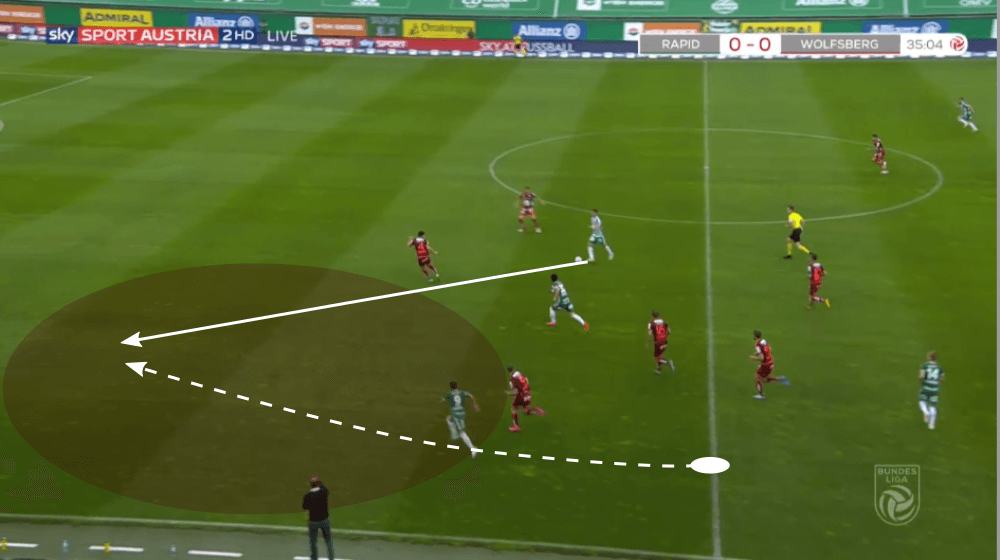 As already mentioned, the positioning in deeper areas or in the half-spaces is not just to get away from his markers, but Fountas should also support his teammates. Especially when they play with a 3-5-2, the Greek often drifts out to the left side to help Maximilian Ullmann as otherwise the left wing-back would be isolated.

Below, we can see how the left striker makes a sprint out of the centre to be positioned between the lines (an area where he likes to be). He receives the ball from Ullmann and plays a through pass with his first touch, but his teammate gets blocked by the opponent. However, this situation is typical for the Greek as he sees that his teammate is isolated and therefore he moves wide to help him. 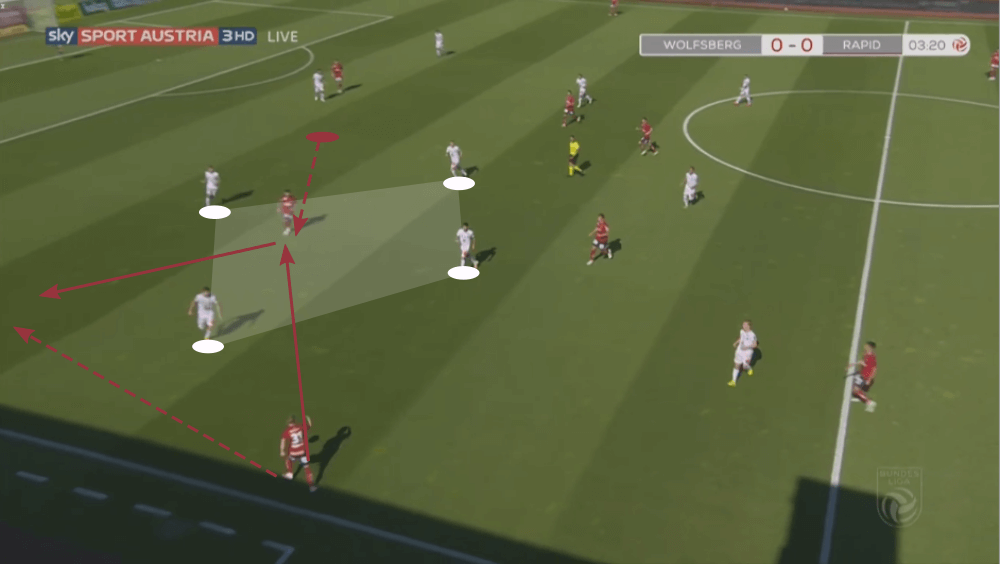 Anyways, Fountas is not just a forward who works hard for his team during the build-up as he also tries to help his team out of possession. We saw that already by looking at the numbers of his defensive duels.

Furthermore, 62.1% of his 2.57 recoveries per 90 happen in the half of the opposition showing that he also efficiently puts pressure on the opponents higher up the pitch. Below, we can see a situation in which he uses his pace and a curved run to force the opponent to turn around and dribble back towards his own goal. However, Fountas doesn’t stop there and continues his sprint. The defender gets nervous, acts sloppy and loses the ball to Fountas who scores in the one-on-one situation against the keeper. 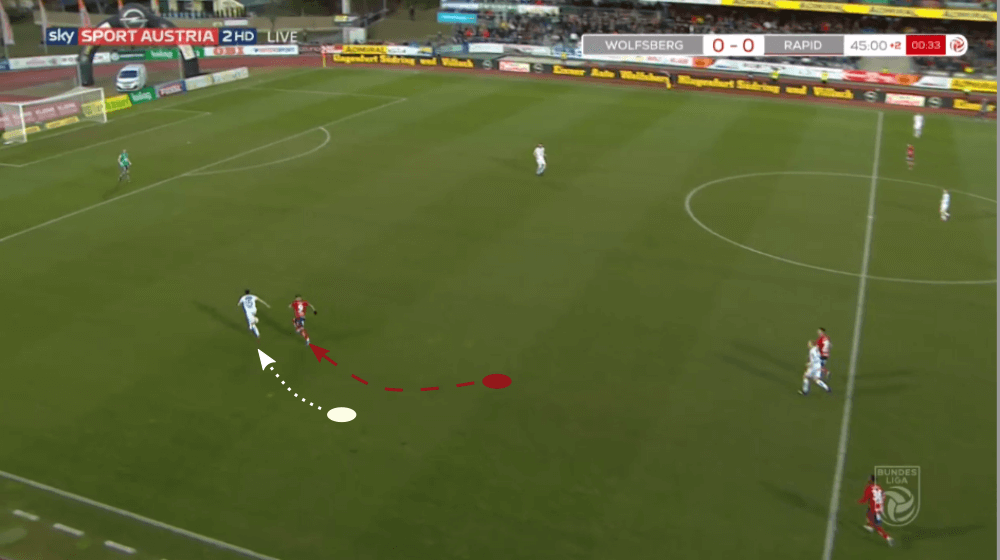 As we now looked in the first part of this scout report at the typical movements of the Greek striker, the subject of his part will be his ball-playing abilities while in the third and last section we will take a look at the way he scores his goals.

Fountas only stays at 170 cm what makes it for him not always that easy against physically strong central defenders. Still, his teammates play often long balls towards him as he is on average involved in 4.97 aerial duels per game, but only wins 27.7% of them.

Considering this, the most long balls often have the goal to not force him into an aerial duel, but he should be able to lay it off with his chest or feet. Fountas is either during the offensive transition or when the opponents press not just the target for through passes, but also for long balls which he should lay off to bypass with one long ball several opponents. We can see a typical example below. 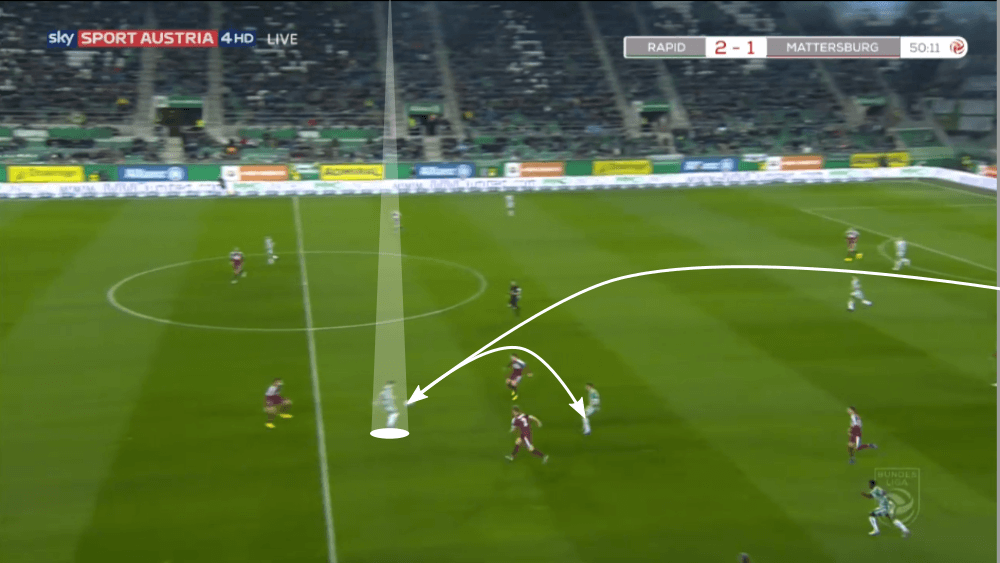 The Greek has the technical abilities to easily lay off passes like the one above with a clean first touch. Basically, the 24-years-old is one of the most technically gifted strikers in the Austrian Bundesliga.

Besides, he has a decent vision and understanding of the game. The latter we already noticed when we looked at his typical movements and positionings. When he drops deeper to get on the ball, he often also shows off his vision with decent balls like the one below. 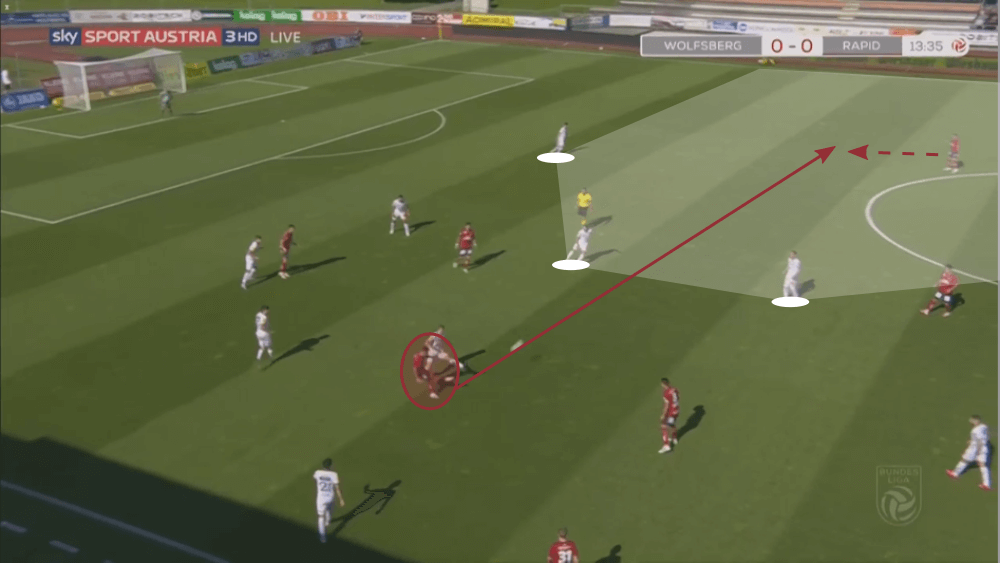 Fountas also made in this season six assists in his 27 games for Rapid Vienna what is a good record for a central forward. Even though he is always looking for the perfect situation to score a goal, he always keeps his head up to find a teammate in a better position.

Below, we can see a situation in which Fountas once more receives the ball in the left half-space during the offensive transition. He dribbles a few yards and waits until his teammate Ercan Kara is in the perfect position for a through pass to then find him with a decent ball. However, his teammate can’t score from this. 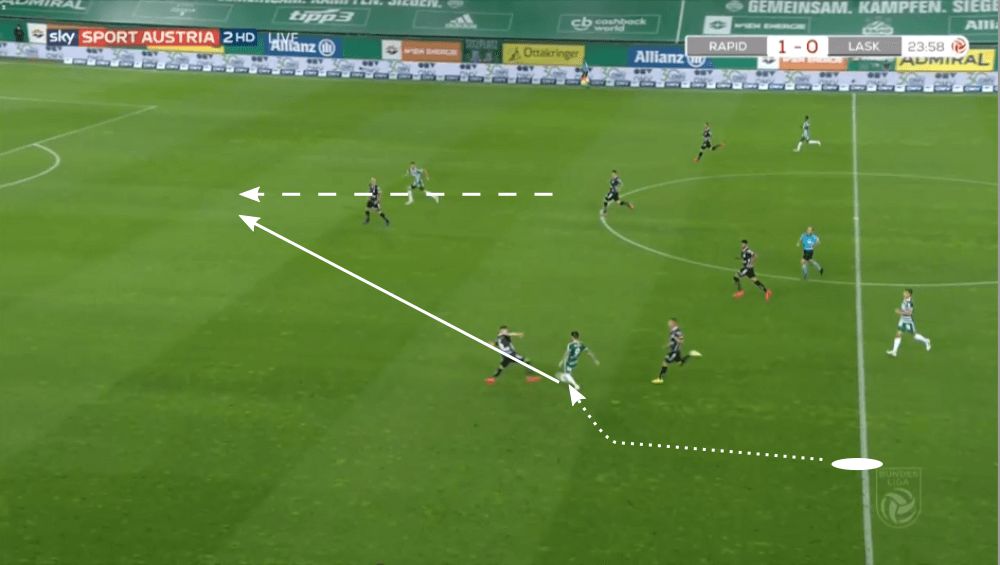 Even though Fountas prefers to drift out to the left half-space (as we saw in his heatmap earlier in this scout report) as he can dribble from there inwards and then has the ball on his strong right foot, he also occasionally positions on the right as we can see in the following shot.

However, as he receives the ball in this situation, he gets immediate pressure from all sides. He is able to stay on the ball but then has to shoot with his weak left foot and the shot goes wide. 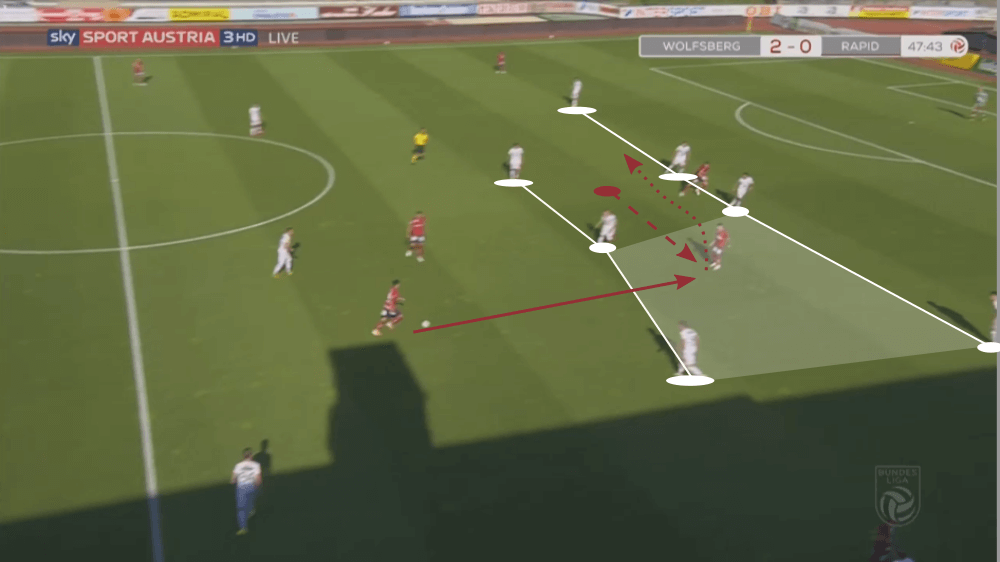 Even though the defenders of Wolfsberger AC are in this situation close to him, Fountas is able to stay on the ball and pick up speed due to his good ball control. The best way to eliminate the strengths of Fountas is when a marker is tight on him when he receives the ball with the back to the opposition’s goal. In these situations, he can’t pick up speed or use his vision to play good vertical balls.

Dominik Baumgartner of Wolfsberger AC did this in the last game of this season and Fountas wasn’t able to find solutions to that. Therefore, this is a clear weakness of the Greek as he rarely finds solutions in such moments and it’s the best way to eliminate his strengths. 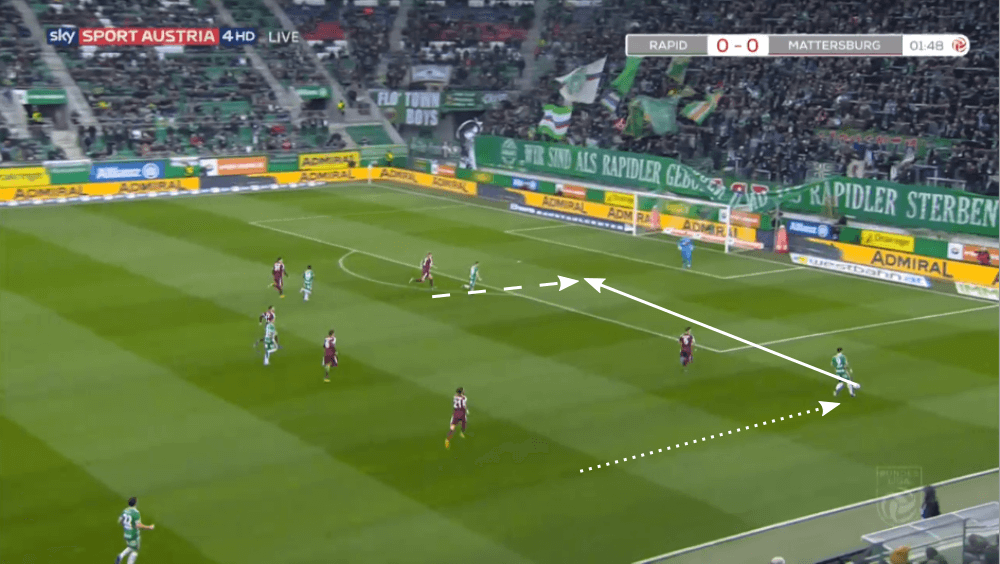 As we now talked about his movements and technical abilities, we will focus in the final section of this tactical analysis on the shooting and goalscoring of the 24-years-old. Fountas scored in this season 19 goals and is behind Daka (24 goals) and Weissman (30 goals) the third-best goalscorer in this season in the Austrian Bundesliga.

As already mentioned in this tactical analysis, the Greek likes to dribble from the left side to the inside to then shoot with his strong right foot. When he does so, he focuses a lot on placing the ball beside the far hand post instead of just using power.

Earlier in this scout report, we saw a situation in which he moved wide during the offensive transition to create distance between himself and Wiesinger. In the shot below we can see the situation just moments later as he dribbles towards LASK’s defender, cuts to the right and then places the ball with the inside of his foot next to the right post. 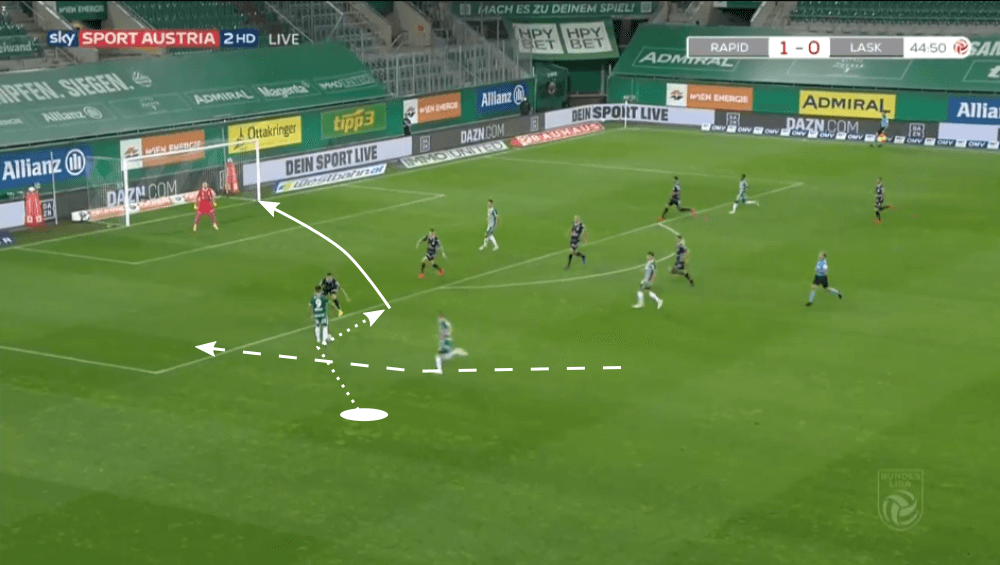 Whenever Fountas shoots from a wider distance (at about on the edge of the penalty box), he uses the inside of his right foot to curve the ball and place it next to the right post. A huge part of his goals in this season were scored that way and we can see that once more below. 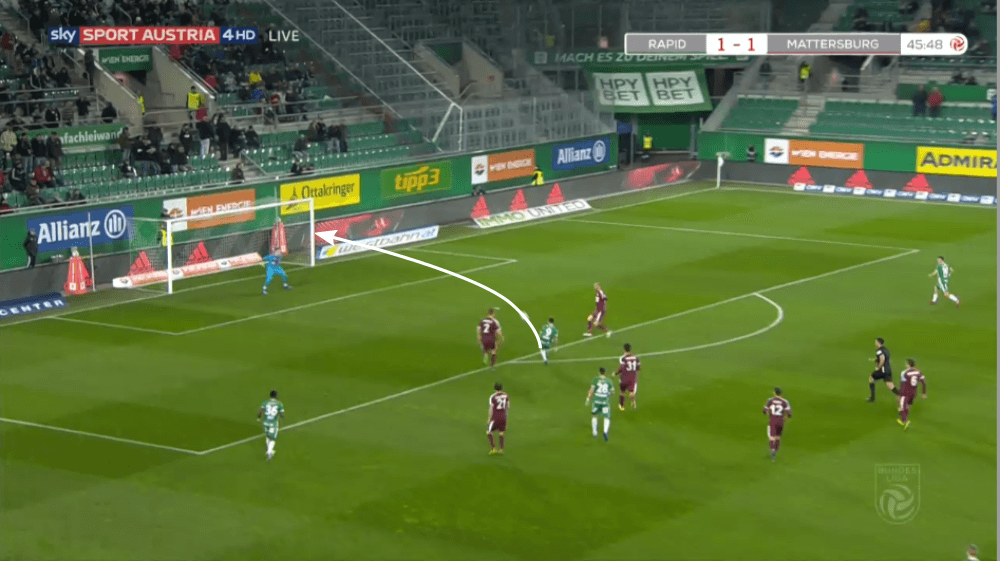 In one-on-one situations with the goalkeeper, Fountas prefers to take a low shot into the corner. He doesn’t always look for a spectacular finish what makes him even more effective in front of the goal. In some situations, when he is already very close to the keeper, he makes a little lob to bring the ball over the feet of the keeper.

As long as the distance between him and the keeper is big enough, he places the ball mainly with a  low-thriven shot in the far hand corner. He also can do that with his weak left one as we can see below. 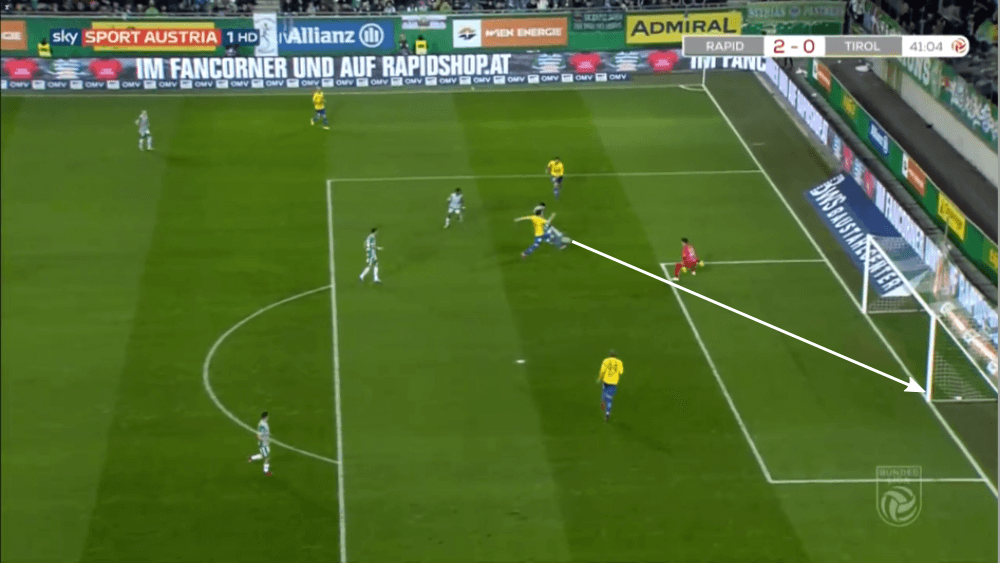 His great and intelligent finishing is also the reson why he scored in this season 0.84 goals per 90 minutes even though he had an xG of 0.37.

Neither did anyone ahead of the 2019/20 season expect Fountas to be the third-best goalscorer in the Austrian Bundesliga nor not that he would be the player in the squad of Rapid Vienna with the highest market value.