Hartberg were ahead of this season among the teams which many experts and fans expected to be part of the relegation group and probably even in the actual fight against relegation. But they were able to qualify for the championship group of the Austrian Bundesliga after the opening 22 games. In this group, they were able to show some good performances against the other five best teams of Austria and finished in the fifth position to enter the play-off final which they won against Austria Vienna.

Therefore, they are now qualified for the qualification of the UEFA Europa League for the first time in the history of the club. The coach Markus Schopp (who was during the season linked with AC Milan due to his good work) was able to create a team which would fit his tactics and Felix Luckeneder is one of the central men for Hartberg.

In this tactical analysis in the form of a scout report, we will look at the strengths and weaknesses of Luckeneder and explain his role in the tactics of Hartberg. Also, we will discuss in the last section if he will be able to play next season at LASK Linz as he will return there this summer after his loan at Hartberg.

Before we look at his abilities by discussing in-game situations, we take a look at his statistics and make a quick data analysis to see where his strengths and weaknesses are and how they get visible in the data.

At first, we look at his statistics for defensive duels since this is one of the central actions for a central defender. Throughout this first section, I took only centre-backs from the Austrian Bundesliga who played in this season at least 500 minutes. Luckeneder and his two teammates Michael Huber and Thomas Rotter are in the graphs blue. 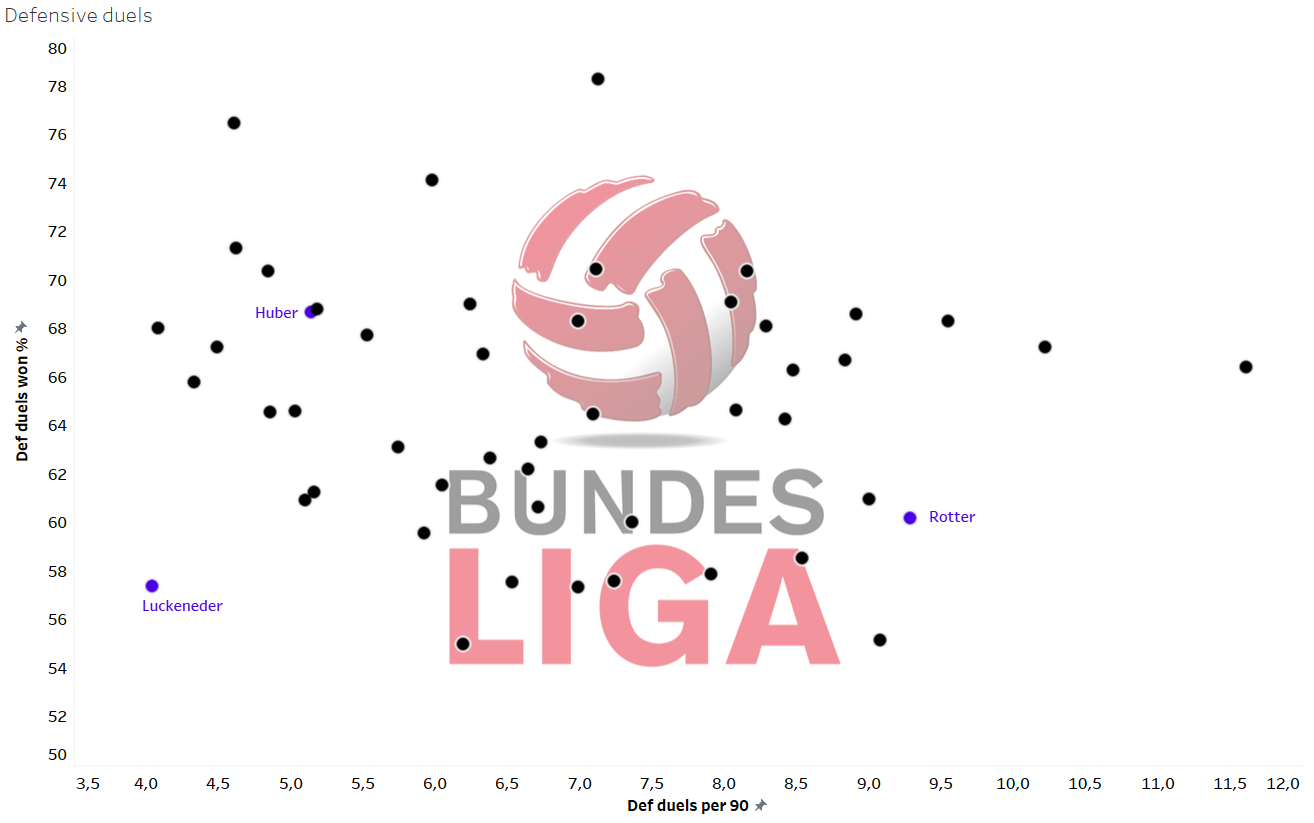 We can see in the first graph above that Luckeneder is neither a centre-back who is permanently looking to get into a defensive duel nor is he that strong in these duels. On the other hand, his two teammates are involved in more duels and additionally have a higher success rate. 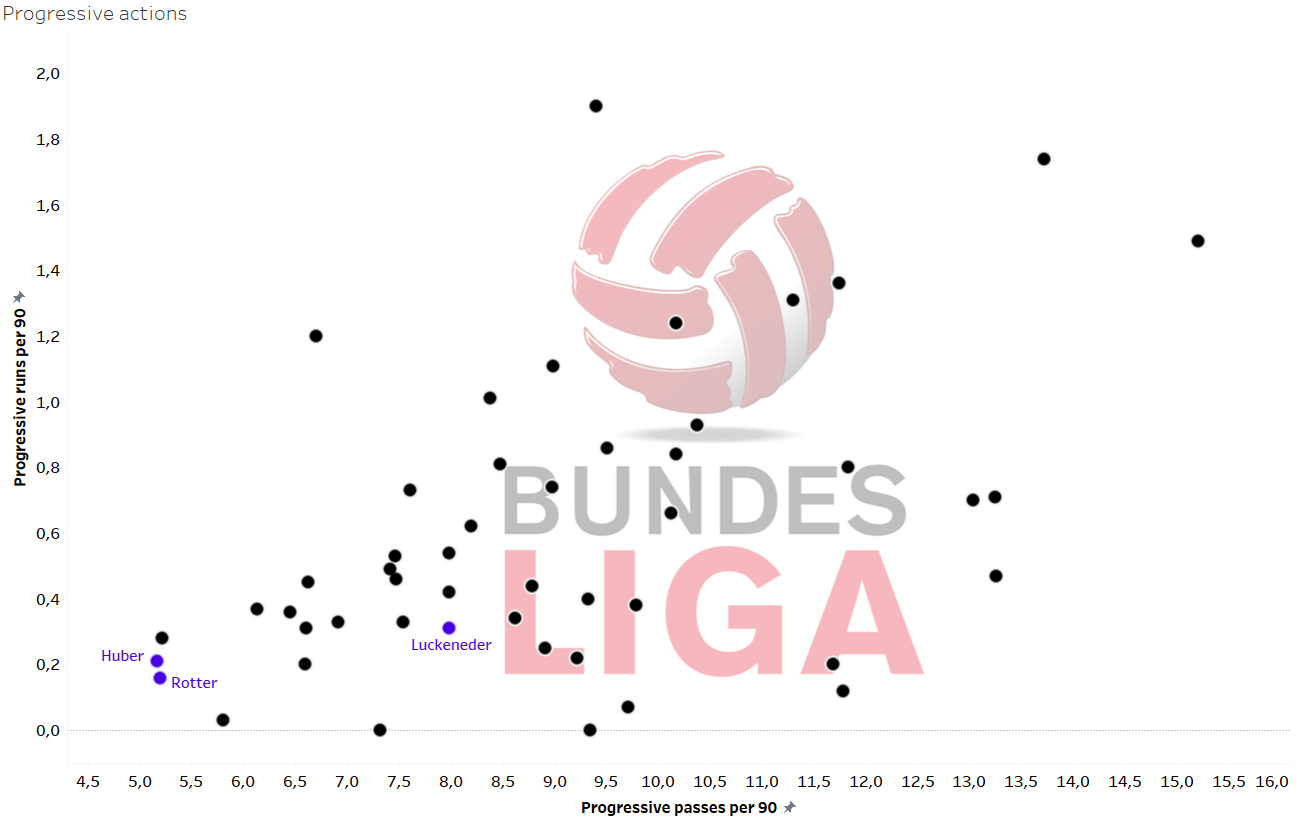 This time, the 26-years-old is far better compared to his teammates Huber and Rotter but has still not outstanding statistics compared to the other centre-backs of the league. Hartberg has the lowest value for progressive passes per 90 and the second-lowest for progressive runs per 90 among all Bundesliga teams. Therefore, it would be interesting to see how high his values would be when he plays for a different side.

In the last graph, we will look at his statistics for long passes since these are central elements of the Austrian’s style of play. 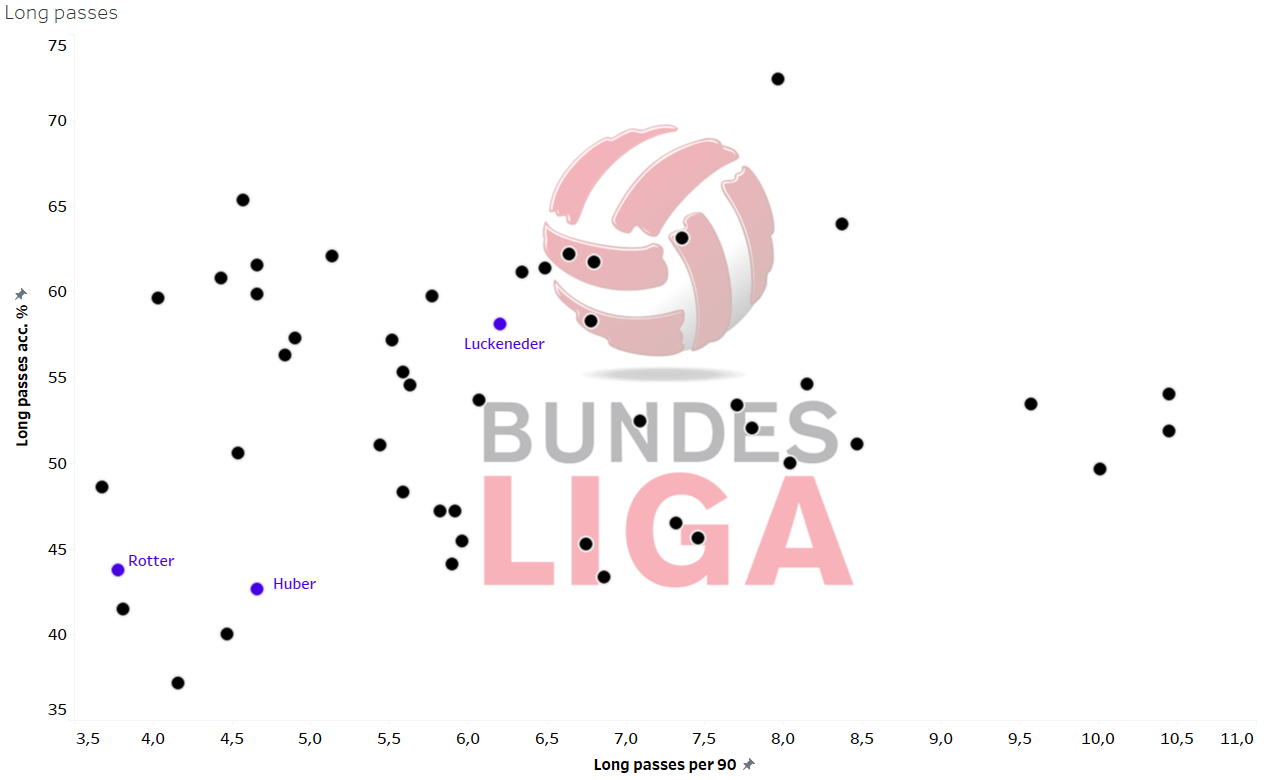 Considering that Hartberg have in most of the games less possession and have only short spells of controlling the ball, Luckeneder has really decent stats and is among the centre-backs with the most accurate long passes.

As already the statistical analysis showed us, Luckeneder is clearly a central defender who is strong on the ball, but not that good when it comes to defensive duels. Now, we will at first look at his different qualities and tactics in possession and then talk about his defensive behaviour.

Left-footed centre-backs who can organise the build-up are very rare in world football. Aymeric Laporte of Manchester City or Lucas Hernández of Bayern Munich are two popular examples. The Austrian Luckeneder is exactly that too and plays therefore mainly as left centre-back in their 4-2-3-1/4-1-4-1.

He is beside the defensive midfielder Bakary Nimaga the one who is responsible for the build-up. In situations when the opposition puts pressure on him, he stays calm and looks for the best solution. One central concept of Hartberg is to do not get hectic when the opposition uses a high pressing as they want to overcome it with short passes and then use the space further up the pitch.

For example in the last game of this season, they did this very well and even though Austria Vienna pressed very high with their 4-4-2, Nimaga, Luckeneder and the goalkeeper René Swete played almost every single goal kick short and sometimes then created triangles like the one below. 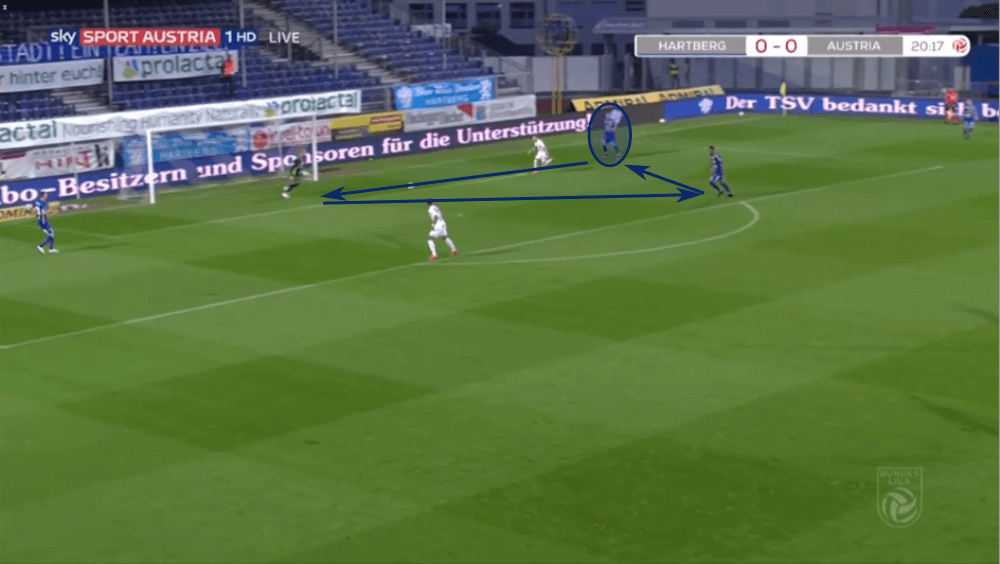 The goal of these little combinations is then always to bring either Nimaga or Luckeneder in a position where they are facing forward and can pick out a passing option. In this example, the 26-years-old left centre-back gets on the ball after this little combination with Swete and Nimaga to then play a good vertical ball to solve the situation. We can see that below and, in this situation, the receiver then laid it off for the left-back who then had space to go forward as they successfully bypass the press. 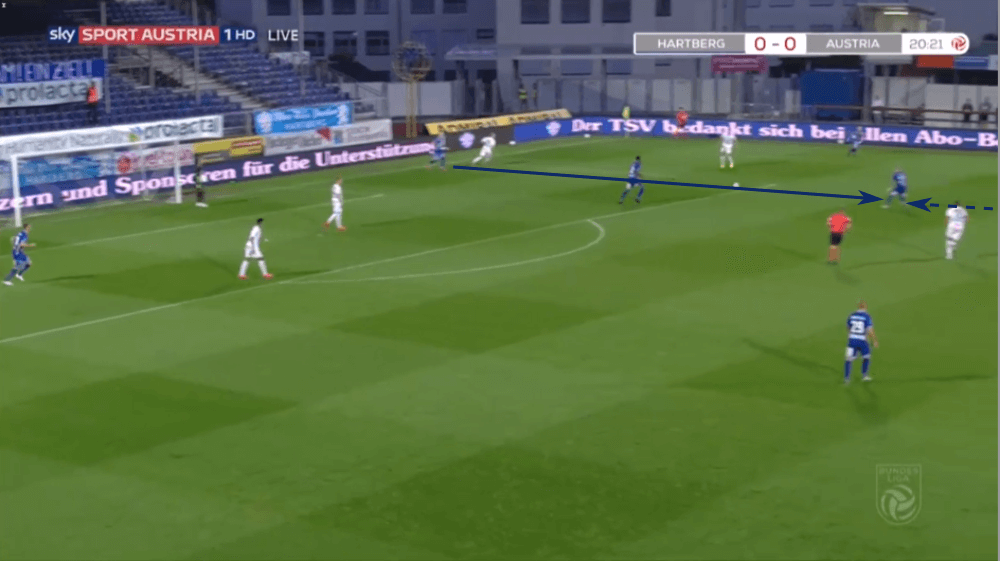 In moments when the Austrian doesn’t get pressed, he dribbles forward to exploit the space in front of him. Since he is for most of the opponents the pressing target because they know that he is the best ball-playing centre-back of Hartberg, he rarely gets so much space like in the situation below. 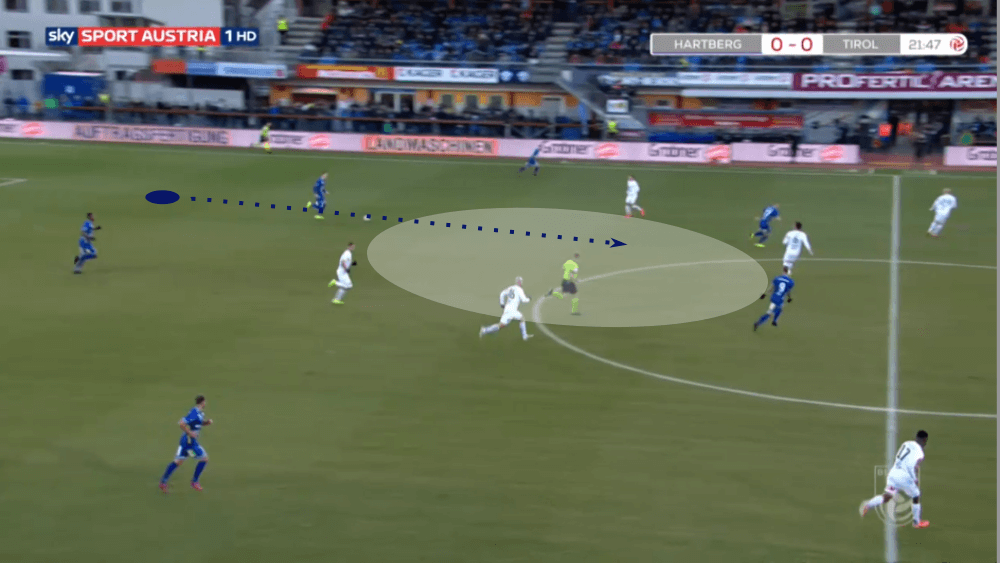 Besides the aspect of how calm and relaxed Luckeneder stays under pressure, his ability to play precise long balls is his greatest strength when he has the ball at his feet. His long balls are useful during the build-up since he often plays passes like the one below to his right-back who can then go down the wing.

Opponents often aggressively shift over to his left side to cut off all short passing options and then give away too much space on the other side what Luckeneder detects and exploits with his switches. 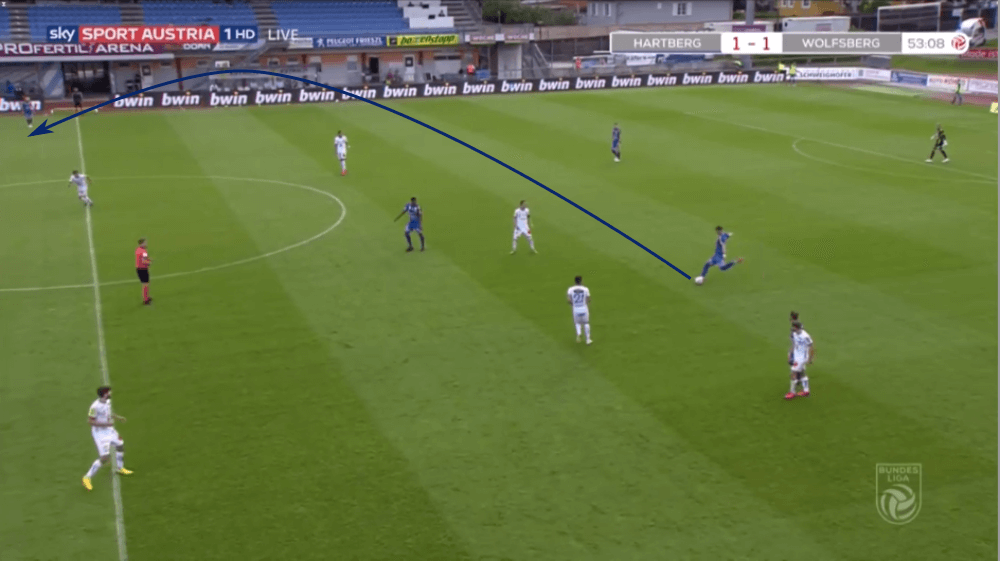 However, he not just plays such horizontal balls towards the right-back or right-wing (when he is positioned deeper) but also often finds one of these two players on the opposing wing in more advanced areas. In such situations, he shows off his vision and technical abilities to play great diagonal long balls.

These passes are a central part of the tactics of Hartberg and often led to dangerous situations in this season. 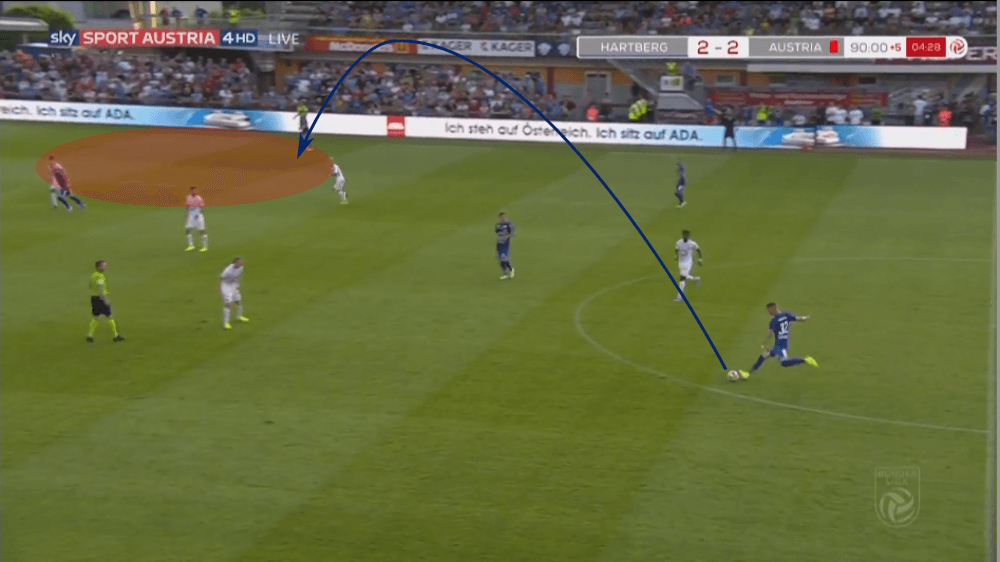 Now, we will look at the defensive behaviour and qualities of the 26-years-old centre-back. He made on average in this season 11.27 successful defensive actions per 90 minutes what is about average when we compare him to the other centre-backs in the Austrian Bundesliga.

When it comes to aerial duels, Luckeneder is not outstanding strong. He won in this season 53.57% of his aerial duels what is below average, but there are enough central defenders in the Austrian Bundesliga who win even less. However, you would usually expect a central defender who stands at 191cm to have a higher success rate.

While his positioning ahead of aerial duels further up the pitch is not always perfect, he is with a success rate of 61.36% for aerial duels in the own penalty area the fifth-best player of all men in the Austrian Bundesliga. This shows us how important he is when it comes to defending crosses of the opposition as we can see below. 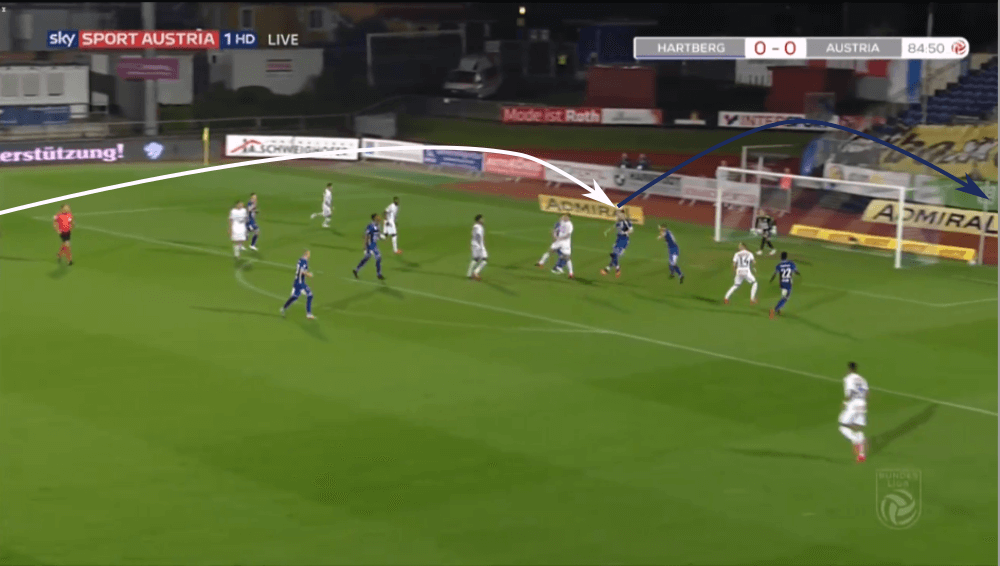 One of the central tactics of Luckeneder’s defensive game is to mark his opponents closely and he also tightly follows them as soon as they are on the ball. We can often see situations like the one below in which his opponent receives a pass and the 26-years-old is directly behind him to give him no option to turn. 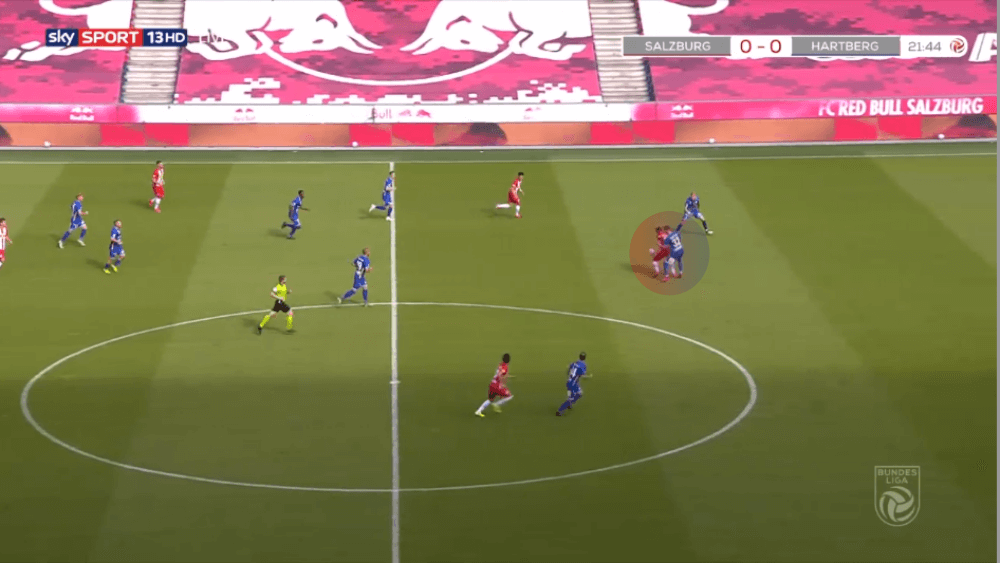 When the opponent then tries to get away from the Austrian by dribbling towards the own goal, Luckeneder mostly follows the opposition and stays near him as we can see below (this shot is taken just moments after the one above).

As we have seen in the graph in the first section of this tactical analysis in the form of a scout report, Luckeneder is not that strong in defensive duels. He has several problems when it comes to defensive duels. One central weakness is his decision-making as he sometimes tries to tackle even though it is not necessary or would be cleverer to wait for a better moment. Besides, he often goes down for a sliding tackle what is not always ideal. And most importantly his timing is often quite weak.

In the example below, we can see a perfect example for that as he goes without any reason down for a sliding tackle and the opponent easily dribbles past him to enter the free space behind Luckeneder. It would have been better if he had tried to slow down the opponent and force him towards the touchline. 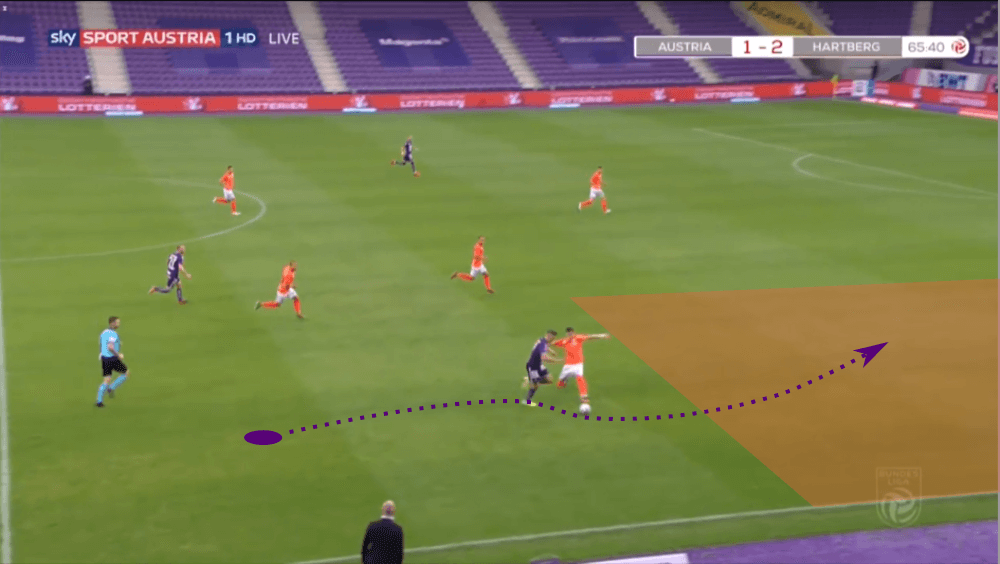 However, he needs to work on his behaviour in the defensive duels since these are central aspects of the game for a central defender.

It is hard to say if he will get a chance at LASK Linz when he will return this summer. They have thrown out their coach Valérien Ismaël and appointed instead Dominik Thalhammer meaning that we can’t yet say if they play with a back four or back three. What he thinks about Luckeneder will be key for what comes next for the 26-years-old.

LASK have currently five centre-backs in their squad and three of them are about on the same level as Luckeneder while Gernot Trauner is on a higher level and Markus Wostry wasn’t able yet to show how good he is at the moment. Therefore, it is realistic that Luckeneder has to leave the club and Hartberg would be surely happy to get him.