The Major League Soccer is Back Tournament is well and truly underway as the third round of fixtures are taking place. This tournament mirrors the UEFA Champions League format, which boasts some of the world’s best clubs such as Real Madrid and Liverpool. In the United States, teams are competing in a tournament for a spot in the Concacaf Champions League in 2021. Groups A through F are fighting for a place in the knockout rounds, with this analysis focusing on two clubs in Group B: Seattle Sounders and Vancouver Whitecaps.

The previous MLS Cup winners, Seattle Sounders, were looking to secure a preliminary place into the knockout rounds. Seattle needed a win to ensure they were in second place after the San Jose Earthquakes secured their claim to the top spot. Due to Seattle’s 0-0 with the Earthquakes and a 2-1 loss to the Chicago Fire, anything but a win would see them eliminated from the competition.

For the Vancouver Whitecaps, they were searching for their first points in the group stages. A loss to Seattle meant it would be mathematically impossible for the Canadian team to advance in the MLS is Back Tournament.

This tactical analysis and match report will analyze the tactics for both sides during Seattle Sounders’ 3-0 victory over the Vancouver Whitecaps. 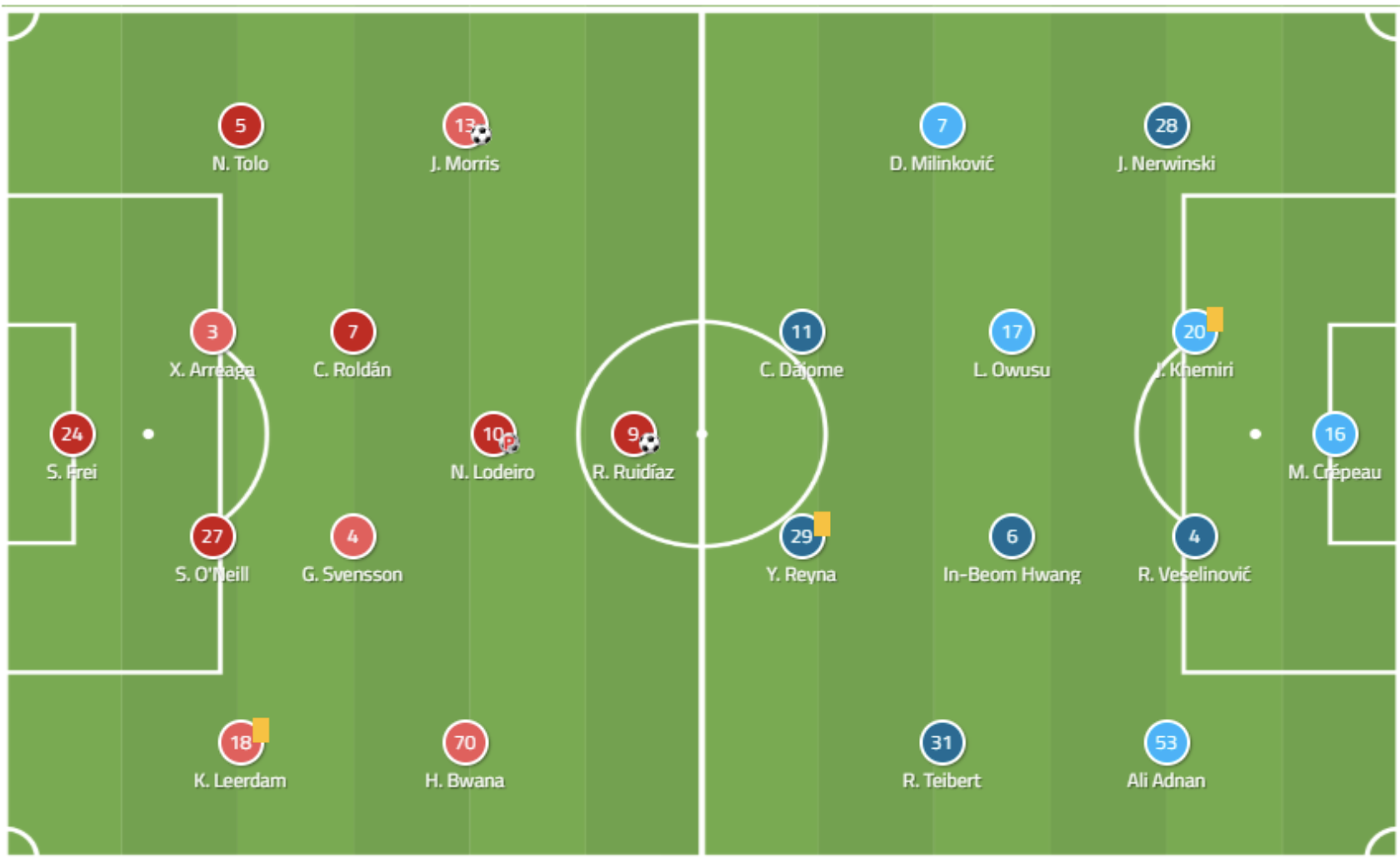 Brain Schmetzer, the Seattle Sounders manager, set out in a 4-2-3-1 formation. This balanced formation focused on the attacking players in order to create chances while the two defensive midfielders sat in front of the backline, which was anchored by Stefan Frei in goal. The key players in Schmetzer’s eleven that were the focal point of the attack were forwards Jordan Morris and Nicolas Lodiero, who were both extremely direct after finding available half-spaces.

The Vancouver Whitecaps started in a flat 4-4-2 with midfielders In-Beom Hwang and Lenoard Owusu asked to do a lot of work in the middle of the pitch. The 4-4-2 was lead by strikers Yordy Reyna and Cristian Dajome, who worked very hard over the 90 minutes but could not find an advantage against the Seattle defense.

One area of the match that influenced the scoreline was Seattle’s ability to attack in transition while the Whitecaps kept possession of the ball. This stemmed from their controlled lack of the ball and their deep-lying tactics in the first half of play.

A key reason for this was their defensive tactics while Vancouver were attacking. The 4-2-3-1 that Schmetzer implemented was meant to be incredibly structured. If the team sits deep, a 4-2-3-1 can be difficult to break down because of the control present in the middle of the pitch. The space in front of the two pivot players and behind the attacking three in front of them is incredibly difficult to break through, especially for a team like the Whitecaps who played in a 4-4-2.

The most important area of the pitch when implementing a 4-4-2 is the two midfielders, who must be capable of linking up play and stopping attacks, sometimes even while being outnumbered. The way the two midfielders can accomplish this is by working together and being connected. Hwang and Owusu did not demonstrate that level of synchronization for the Whitecaps. There were many times during the match where they were caught out, allowing for the Sounders to collect the ball and attack in transition.

An example of the 4-2-3-1 formation working well occurs in the analysis below, where the Earthquakes are attacking. The two pivot midfielders are sitting behind the attacking midfielder, creating a triangle. This space is incredibly controlled hence why the Earthquakes are in different areas of the pitch in order to try and move the ball forward. With only two midfielders, it would be incredibly difficult to play through the defensive triangle that the three Sounders midfielders created. 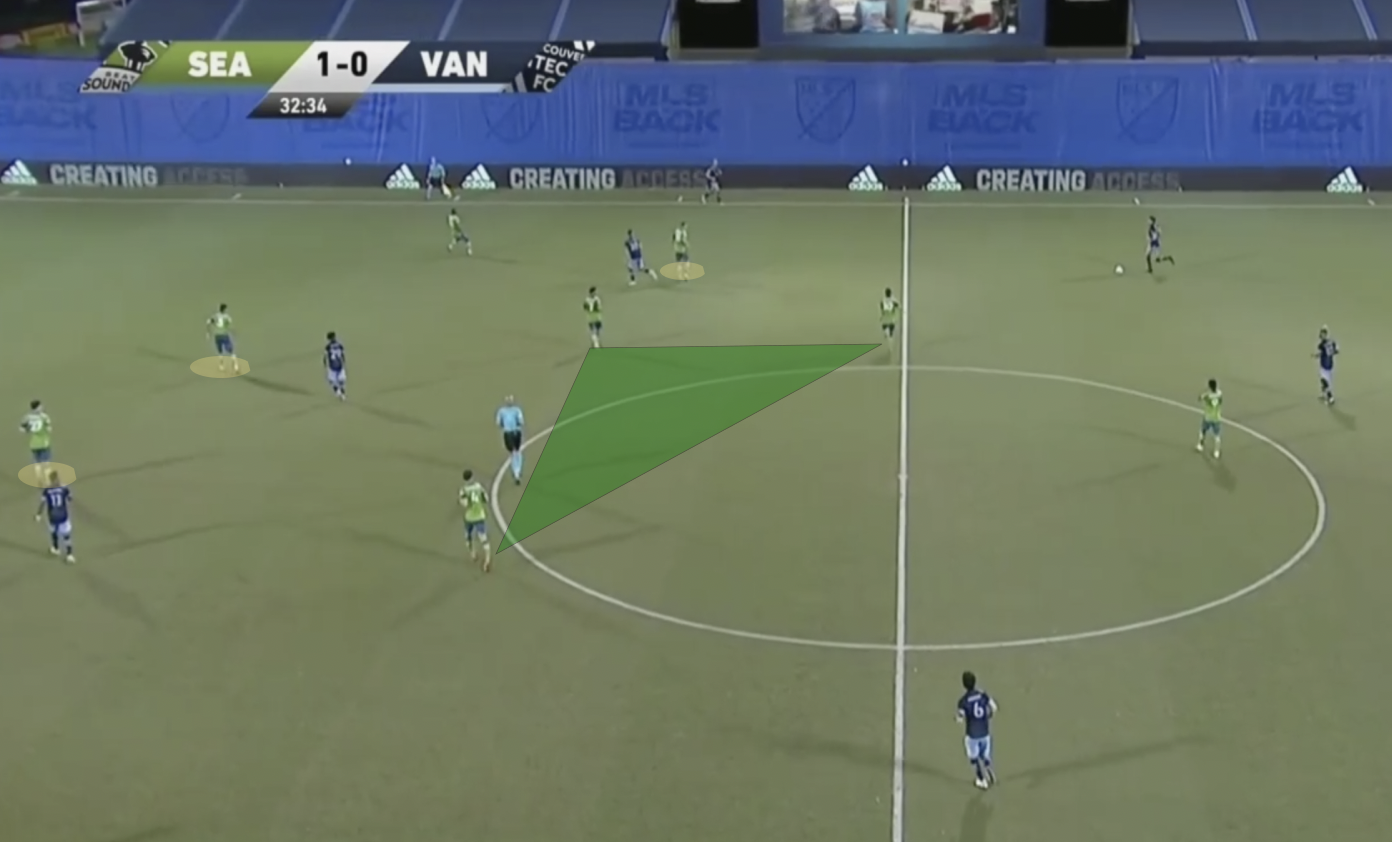 A key distinction to make while analyzing the Sounders tactics in this match was their ability to attack because of their defensive shape. As explained earlier, they were extremely patient while defending. The structure made it difficult for the Whitecaps to find a breakthrough despite the 52.1% possession they had during the match. After the Sounders scored both of their goals, they were able to start controlling possession as play progressed.

Another key area Seattle found success in was getting the ball to the feet of their danger man, Jordan Morris. The American has been a constant threat for the Sounders in past seasons and did not slow down on Sunday night. Sounders number 13 scored one goal and registered one assist, with five shots on target.

The reason for Morris’s success was due to his ability to find space, specifically in the half-space. Due to the shape of the Whitecaps being unstructured, Morris was able to drive in and out of half-spaces on the left flank with little to no pressure when he received the ball. The American has tremendous power and pace which made him incredibly dangerous in these situations. He would constantly have options to drive directly at the defender or play a one-two pass around the defender by linking up play with Lodeiro and the lone striker Raul Riudiaz.

The first example of Morris driving directly at the defender is shown below. In this scenario, Morris drifts over to the left flank and picks up the ball in plenty of space. Notice the amount of time and space he has to drive forward and dribble at the defender with pace. This became a huge issue for the Whitecaps as Morris was a gamechanger in the match. They needed to close him down and get tight to the ball, however, Dos Santos did not change any tactics. 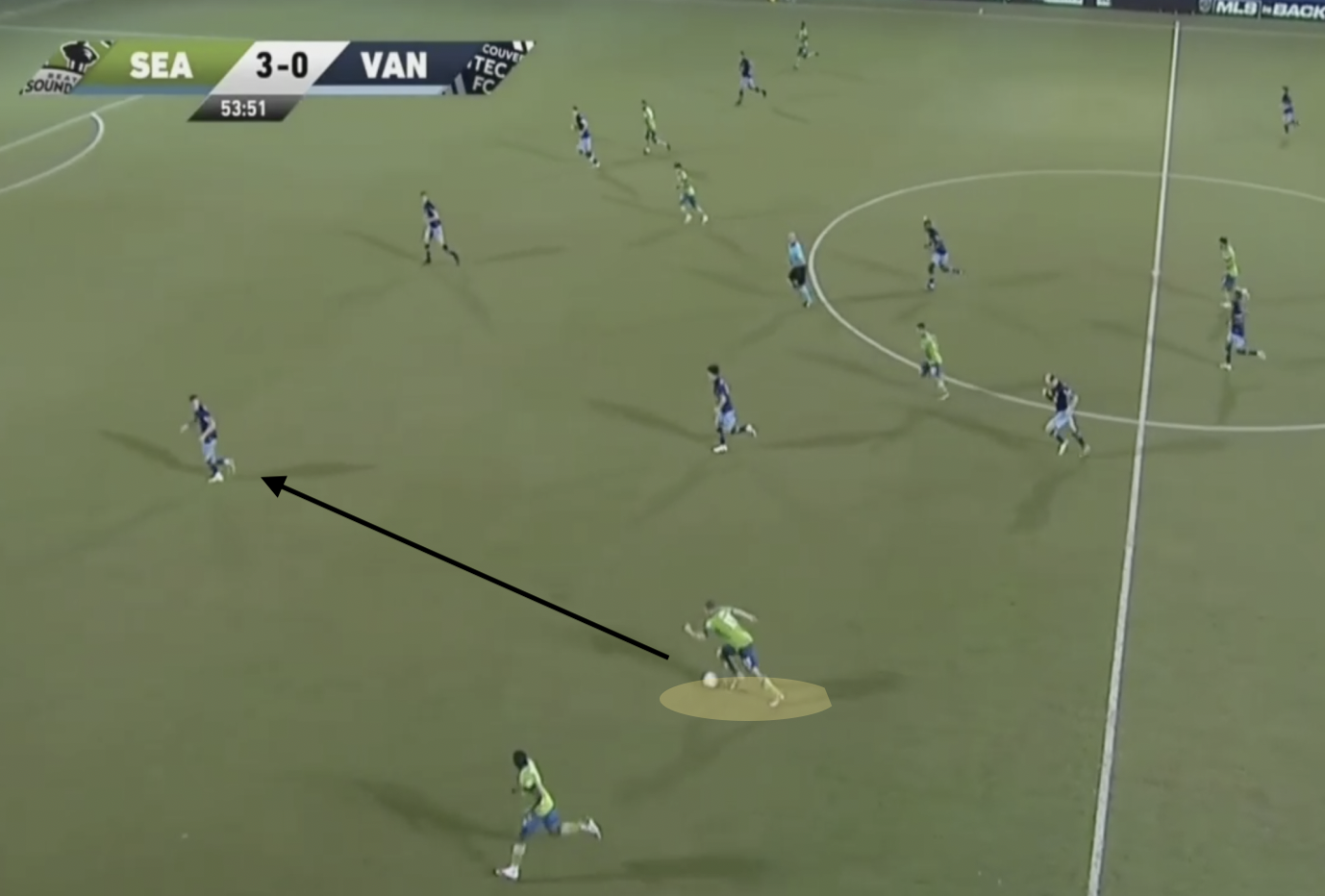 The reason this is so effective is because the defender gets caught flat-footed. When dribbling at pace, Morris can change directions quickly or pass it to a teammate. If the player is to follow Morris’s run and not Morris’s pass, the other player with the ball can easily dribble into the space left vacant by the abandoned defender.

Equally, if Morris plays the one-two, it causes another problem. If the defender stays put and covers the space the player receiving the ball could dribble into, then Morris is equally in behind the defender. An example of this can be seen below. Morris continues his driving run from the image above and has three options. He can play it wide, play a one-two in the middle, or continue to drive forward. This all stems from the lack of pressing when Morris had the ball further up the pitch. The defender now has a difficult decision to make as Morris approaches the edge of the box. 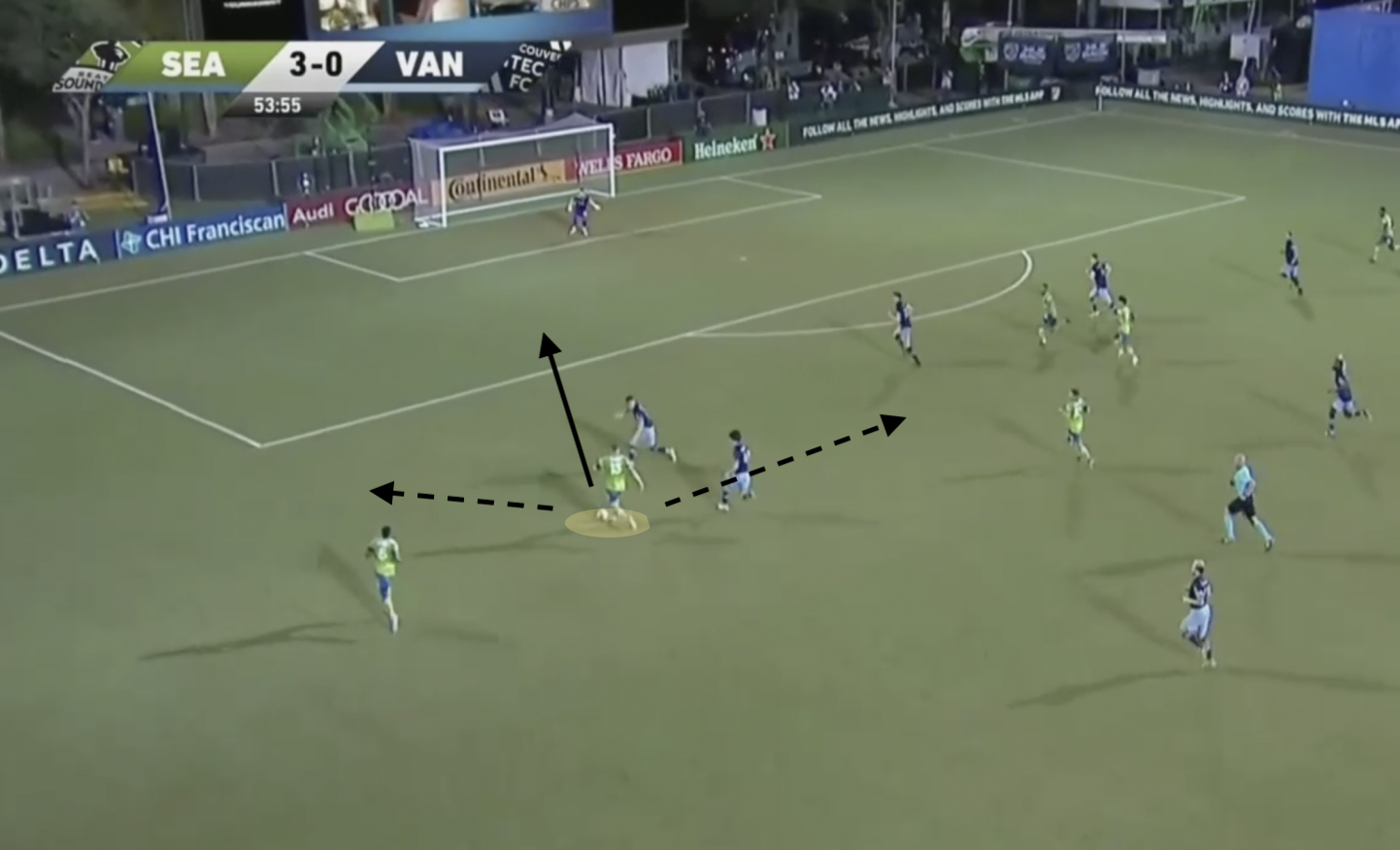 This dilemma caused headaches for the Whitecaps because they did not put enough pressure on the ball carrier. It was too easy for Morris and other Sounders players to drive directly through the defense. There was a lack of defensive pressure in the Whitecaps own half of the pitch, however they did try implementing pressure while attacking the Sounders back-line.

Another area of the match that Vancouver failed to make an impact was in their pressing tactics. The last section explained how the Whitecaps lacked pressure while defending in their own half; when the Sounders had the ball in the back, the Whitecaps pressed often. Perhaps the reason for this tactic was to try and win the ball back quickly, which is logical considering the high amounts of possession Dos Santos’s men enjoyed throughout the match.

Despite this tactic fitting the system, their execution of the pressing traps were poor. An effective press requires all players to move together in order to win the ball back or force the ball into a certain area. Vancouver tried this tactic multiple times but it failed to lead to an advantage. This can be attributed to their poor understanding and structure of the 4-4-2. They lacked togetherness and synchronization, part of what makes a 4-4-2 powerful.

An example of a failed press can be seen below when Vancouver looked to trap the Sounders on the right side of the pitch. The outside and central midfielders all press the ball forcing the pass back to the keeper due to limited options for Seattle to play out of the back. At this moment, the press is effective, but as it progresses, it was not. 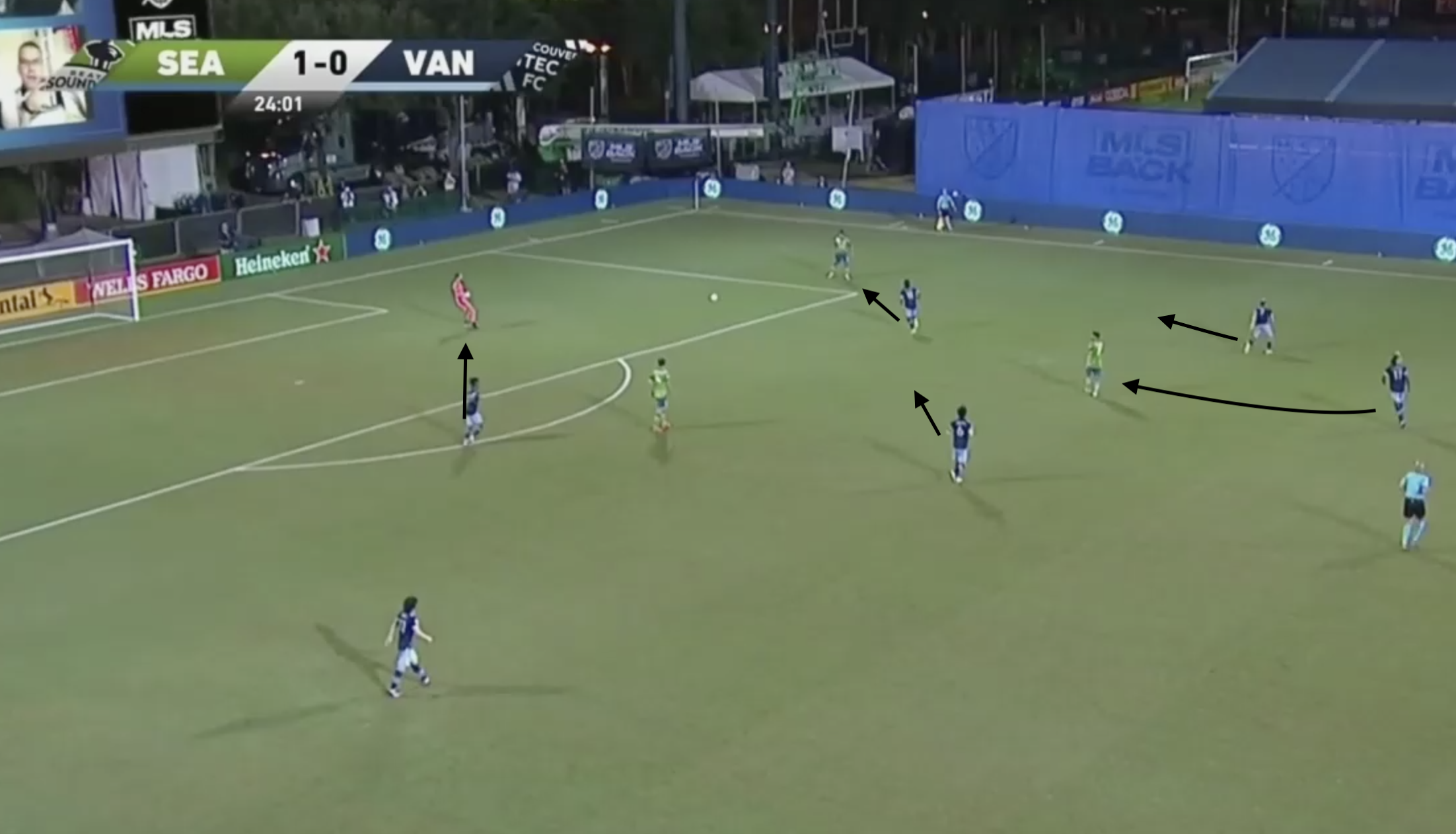 The press continues, but the Whitecaps are not close enough to the ball in order to create a turnover that they were looking for. Instead, Frei is able to pick out a pass to his teammate who is in open space. 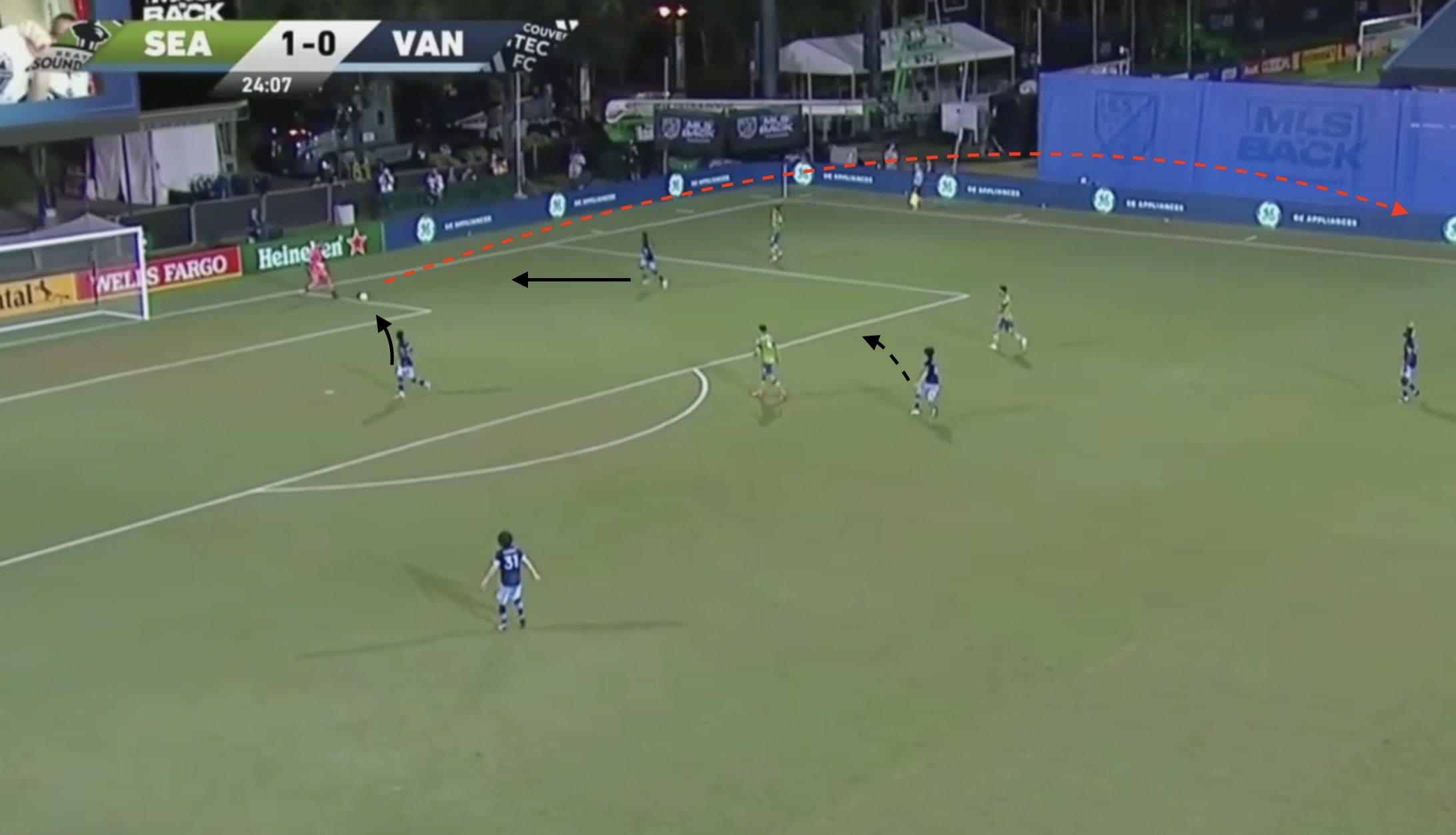 Because the Whitecaps could not get to the ball quick enough, their efforts to gain an advantage by pushing men forward backfired. As you can see, the rest of the team did not advance up the pitch as they should have, causing a problem as the Sounders got the ball in the midfield. The Seattle midfielder is standing in acres of open space where he can turn and push up the pitch. This sequence took many Whitecap players out of the defensive group because of the failed press. 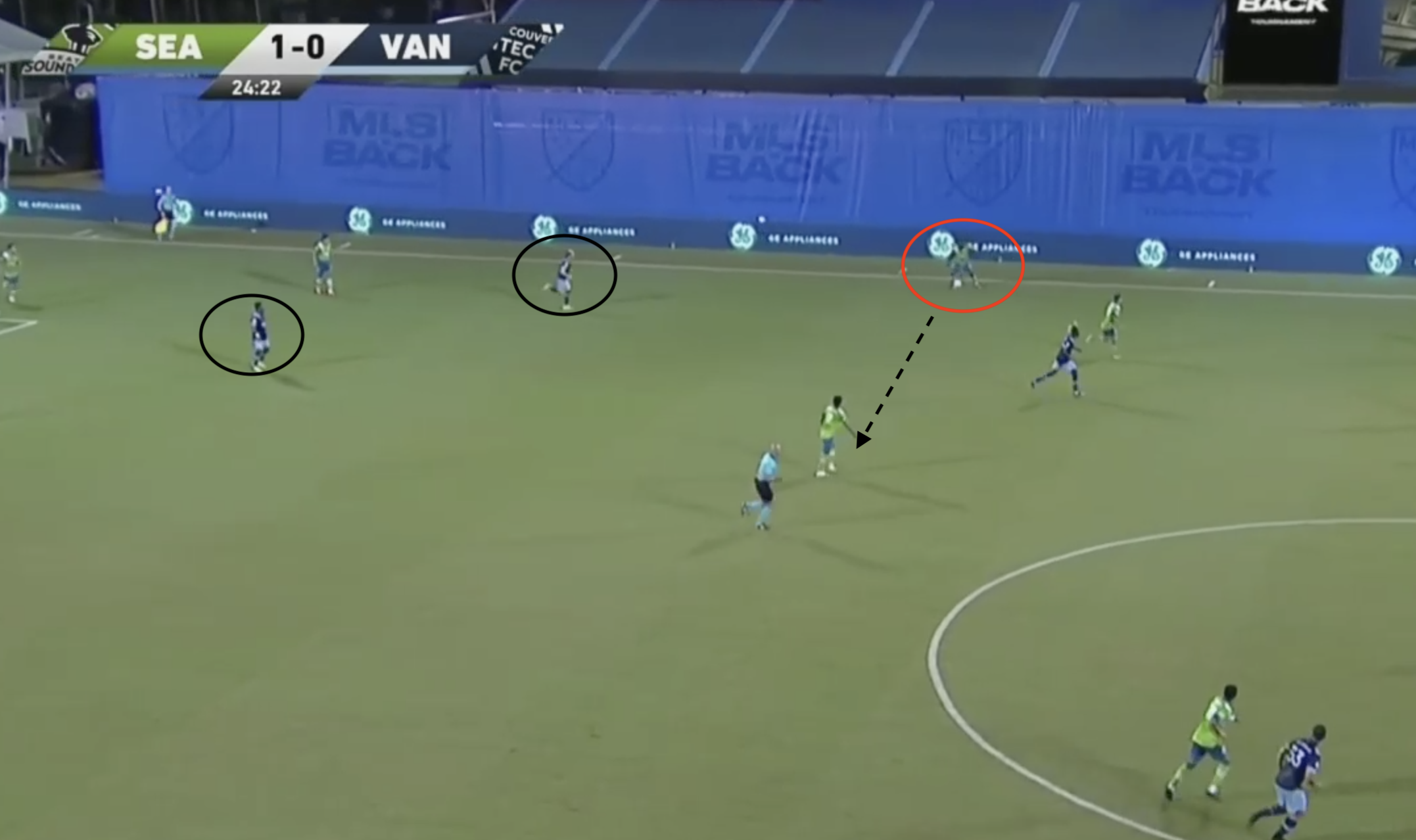 This match favored the Seattle Sounders because they executed their game plan extremely well while the Vancouver Whitecaps fell short of their tactical duties. Many of the basic principles of the 4-4-2 were not implemented by the Whitecaps and is shown in the result at the end of the match. The Whitecaps were not together, they struggled to penetrate the Sounders defense, and were too slow in the middle of the pitch.

On the contrary, Seattle were fantastic. They were able to soak up pressure then hit Vancouver on the counter-attack. As they settled into the match, the forwards found space to attack the Whitecaps back-line in a direct manner. This caused major issues for the Canadian side, issues that they could not deal with.

It will be up to the Chicago Fire to decide whether the Seattle Sounders are included in the next round of the MLS is Back tournament. Chicago Fire play the Vancouver Whitecaps in the final match of group B, which can be another chance for Dos Santos’s men to register their first points of the tournament.