The best finishers of the 2019/20 Premier League – data analysis

In this data analysis, we will provide an in-depth analysis on the best finishers in the Premier League by analysing the data and statistics of the best forwards from this season. For clarity, the players included in this data analysis have all played a minimum of 1000 minutes and have featured in one of the typical forward three positions (RW, LW, CF).

Firstly, let us remind ourselves of the final top scorers table. Jamie Vardy finished as top scorer, with a total of 23 goals. With Pierre-Emerick Aubameyang tied for second with Danny Ings on 22. Raheem Sterling and Mohamed Salah finish off the top five with 20 and 19 goals, respectively. The first stat we will analyse is goals versus xG. Quite simply, how many goals has a player scored versus their expected goals. This statistic will give us an overview of a player’s finishing for the entire season. 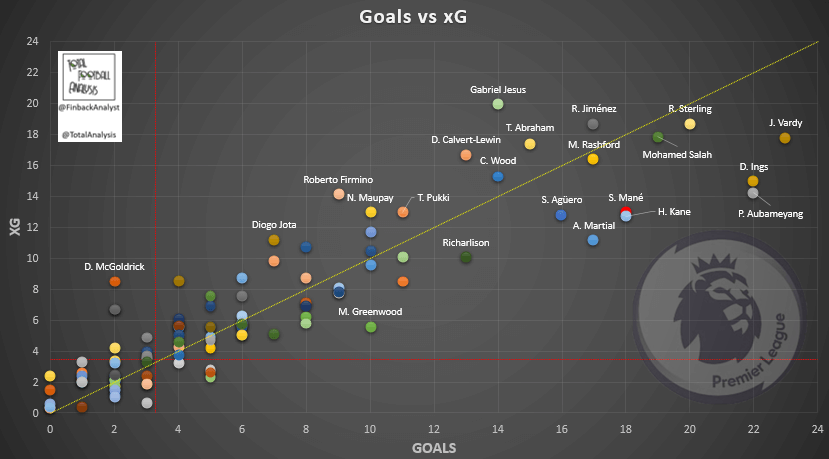 We can see in the image above that the majority of the top-scoring players all out-performed their xG. We can read this table as any player below the yellow line scored more goals than xG and any player above the yellow scored fewer goals than their xG.

The top nine scorers in this season’s Premier League all out-performed their xG with Aubameyang scoring 22 goals, 7.74 more than his xG of 14.26. Ings also heavily outscored his xG with 22 goals from an xG of 14.94. Manchester United youngster Mason Greenwood also impresses with 10 goals from his xG of 5.58.

On the other end of the scale. Sheffield United’s David Mcgoldrick under-performed his xG by 6.48 with only 2 goals from his xG of 8.48. Gabriel Jesus and Roberto Firmino, of Man City and Liverpool, both struggled with Jesus underscoring his xG by 5.92 and Firmino by 5.09. Jesus had the highest xG of all forwards in the league with 19.22. Raúl Jiménez, of Wolves, has the second-highest xG with 18.66.

Overall, the forwards in the league had a very minor under-performance of xG of 0.18.

Whilst we can analyse the stats for goals and xG, it is better to look at per 90 statistics as we will be able to compare players more fairly. 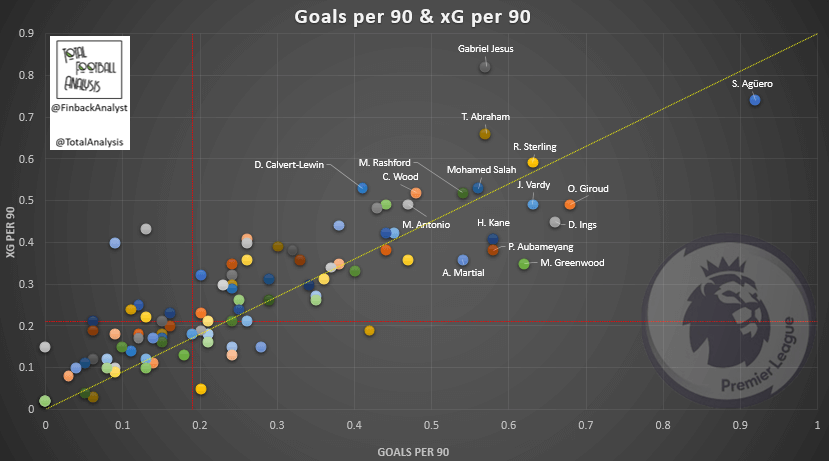 When looking at per 90 statistics, the graph looks a lot different. Sergio Agüero is by far the most prolific forward in the league with 0.92 goals per 90, whilst City team-mate Jesus forges even further clear in terms of xG per 90. Chelsea’s Tammy Abraham has under-performed his xG by a considerable amount as did Everton striker Dominic Calvert-Lewin. As per the earlier scatter graph, any player appearing above the yellow line has underachieved his xG per 90, any player below the yellow line has overachieved his xG per 90. Starlet Greenwood, once again, ranks as one of the highest for goals per 90 since breaking into Ole Gunnar Solskjær’s first-team squad.

The next statistic we will look at shots on target, as a percentage, and goal conversion rate. The ability of a goal scorer to consistently challenge the goalkeeper and convert his shots into goals as frequently as possible. We can see these statistics in the scatter graph below. 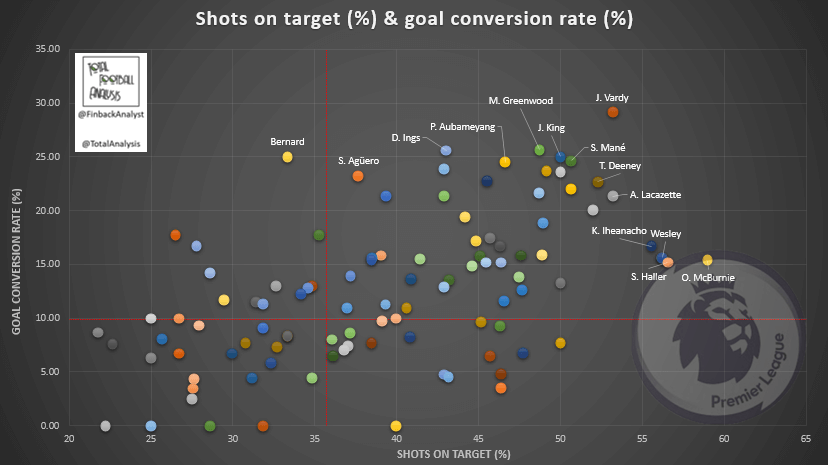 Sheffield United forward Oli Mcburnie has the highest percentage of shots on target with 58.97% with West Ham United’s Sébastien Haller, Aston Villa’s Wesley and Leicester City’s Kelechi Iheanacho all impressing with above 56% shots on target.

Vardy, along with Sadio Mané, Joshua King and Greenwood are amongst the most all-round forwards in terms of getting their shots on target and converting these shots into goals.

Proficiency in open-play and getting into dangerous areas

A forward’s main responsibility is to score goals and due to this a lot of forwards are their team’s designated penalty taker. Whilst this is good for allowing a forward to pick up extra goals throughout the season, it doesn’t reflect how good of a finisher a player is. The ability to score goals from open-play and having a vast number of touches in the opposition’s box are two stats more suited to that of a clinical finisher. In this next section we will look at the data and statistics for non-penalty goals per 90 and touches in box per 90 and use these stats in our analysis of the Premier League’s best finishers. 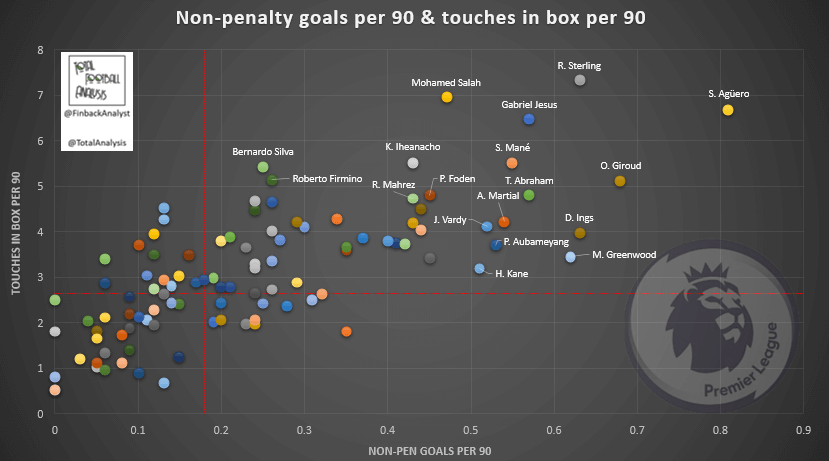 The graph above shows us Premier League veteran Agüero is still by far the best natural finisher in the Premier League with an astonishing 0.81 non-penalty goals per 90. The closest player to the Argentine is Olivier Giroud, the Frenchman has an impressive 0.68 non-penalty goals per 90. Man City trio Sterling, Agüero and Jesus are kept company by Egyptian Salah for touches in the box. All four player have between 6.47 – 7.32 touches in the box per 90.

Once again Ings and Greenwood impress with Sterling and Agüero the only other players to score more than 0.6 non-penalty goals per 90.

The ability to get into dangerous areas and cause opposition’s defence problems is key to a player being a great finisher and the players we have mentioned above all exhibit characteristics of great finishers. 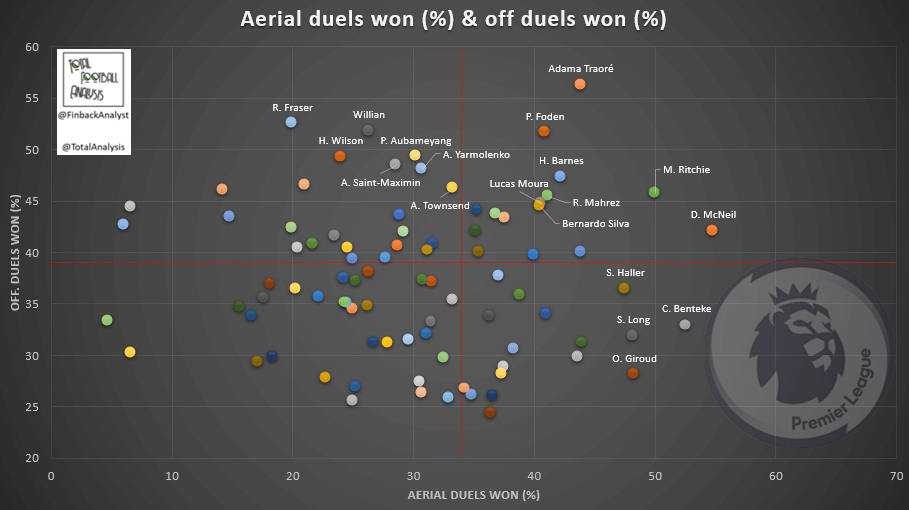 The scatter graph above shows us that Dwight Mcneil of Burnley has the highest aerial duel win percentage, the six-foot Englishman wins an impressive 54.84% of his aerial duels and 42.06% of his offensive duels.

If we analyse where certain players are  appearing on the graph, we can see that the stereotypical target men are clustered together in the bottom right-hand quadrant which is an area of above average aerial duels and below average offensive duels, a few players from this area are Crystal Palace’s Christian Benteke and perhaps an outlier with Shane Long appearing in this section despite only being 5ft8” (178cm).

We also have the upper left-hand quadrant which is occupied by smaller more agile and pacey forwards such as Ryan Fraser and Chelsea’s Willian. The players in this section all have above average offensive duels and below average aerial duels.

We then have the area a combination of both. Players such as Phil Foden and Harvey Barnes appear in this area. An area where most players are under 6ft, yet all are proficient at winning their aerial duels and possess the pace and power to beat their opponent’s in an offensive duel.

This data analysis has produced several players that are of interest. In the next stage of the analysis we will look at these players and look at what next season may have in store for them. All the images below are credited to https://www.footballslices.com/.

We can see just how impressive Vardy has been this season from the stats, as shown below in his slice. The further a coloured section is to the outer edge, the higher he ranks among players in Europe’s top five leagues with 10+ starts as forwards. 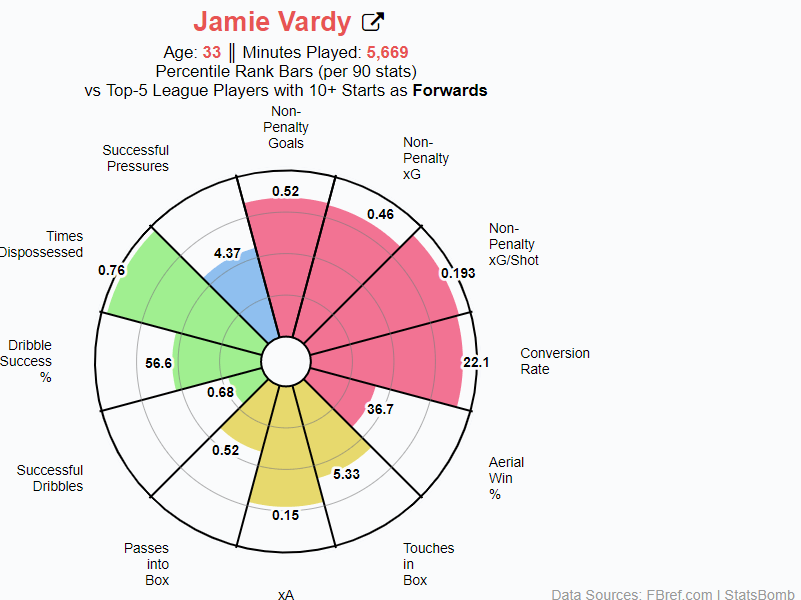 The youngster has impressed greatly in his debut campaign at first-team level. He ranks in the top 1% of all forwards in Europe’s top five leagues for conversion rate and in the top 2% for non-penalty goals per 90. As well as scoring well in his dribbles and his ability to retain the ball. 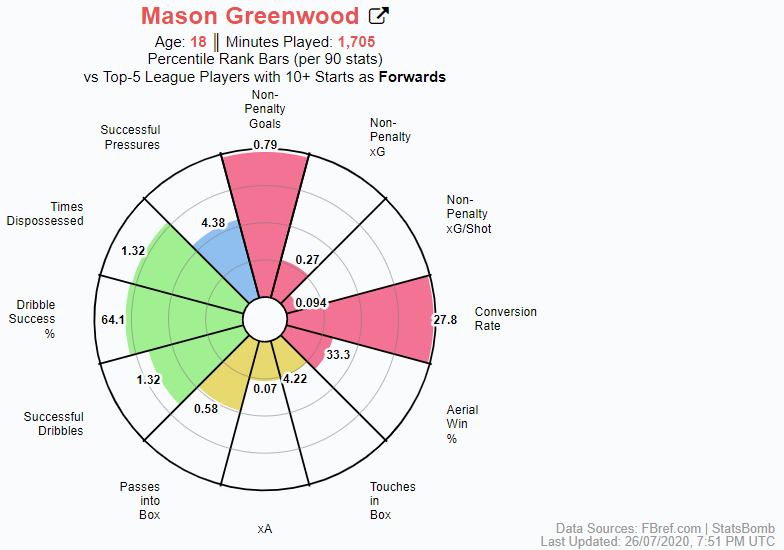 Greenwood has shown flashes of the great player he could become in the future. The 2020/21 season should be a year of gathering as much as experience as he possibly can and to continue his development under Solskjær.

The Brazilian’s role in Pep Guardiola’s swashbuckling City side has been increasing year on year as the ageing, but still brilliant, Agüero is unable to feature as much as he would have in years gone by. Jesus has been somewhat unfortunate, having under performed his xG by 5.92. 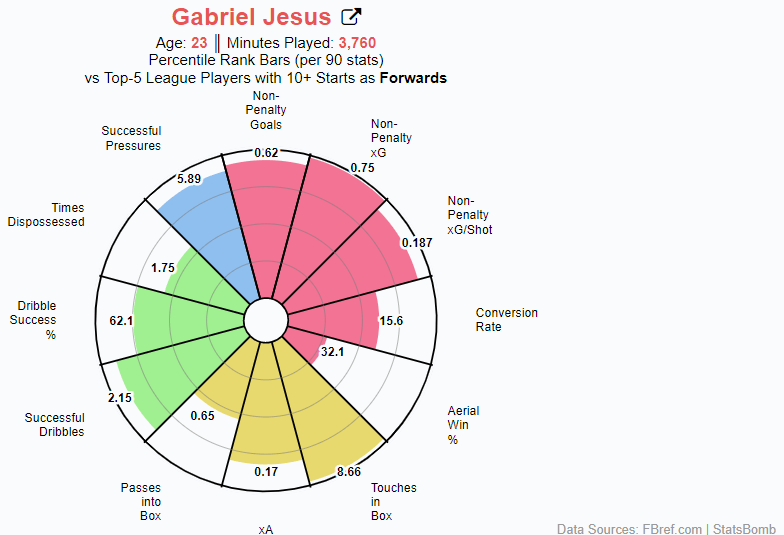 Jesus will undoubtedly play a more important role within City’s system and if he performs to his xG next season he will surely be in the running for the golden boot.

Lastly, we will look at ‘Bobby’ Firmino. Another Brazilian in our shortlist. It has been well-publicised that the Liverpool number nine has struggled in front of goal this season. Firmino has the 12th highest xG in our dataset, although his actual goal tally of nine, only ranks him as the 23rd highest scorer in our dataset – which does not include high-scoring midfielders such as Kevin De Bruyne. We are all aware of how efficient the Brazilian is with his defensive contributions. In his football slice below, we can see that he scores highly in all areas bar his scoring. An area which he would be expected to improve upon in the 2020/21 season. 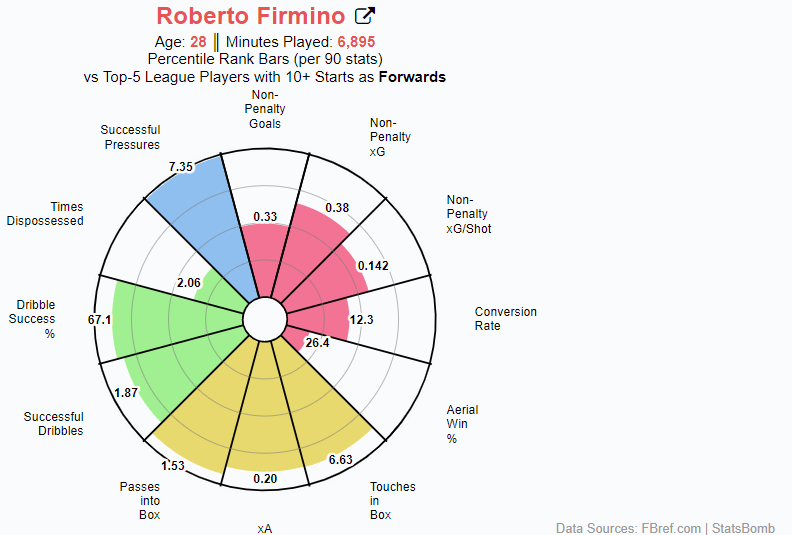 In this data analysis, we have identified some of the best finishers in the 2019/20 Premier League season. Aubameyang was statistically the best finisher in the league, out-performing his xG by 7.74 and McGoldrick was the worst under-performing his xG by 6.48. We cannot rely solely on xG. When we combined other attacking metrics such as touches in the box, conversion rate and duels success rate, it becomes difficult to identify the absolute best finisher in the League. We can categorise players in groups such as those who over or under performed xG or those who had a high conversion rate but lacked minutes to prove their consistency over the course of the season. One thing is for certain though, 2020/21 should produce another season of exciting attacking football with additions already being made with the likes of Timo Werner and Hakim Ziyech already joining Frank Lampard at Chelsea. It will be an interesting season with an abundance of attacking talent on show.