This is the last piece of my series in which I use data to find the best players of Austria in different positions. We already looked at the centre-backs, full-backs, defensive midfielders, offensive midfielders, and wingers. In this sixth and last data analysis of this series, the task will be to find the best and most interesting strikers of Austria and probably also line out which players could be interesting in the future for Franco Foda.

In this data analysis, we will use data and statistics to find the best strikers for the Austrian national team.

Those of you who already read some pieces of this series know with what we start: the filters. The three central and most important filters are again that the players need to be Austrians and that Foda must have the option to nominate them for the national team respectively, they must have played in the current season at least 1012 minutes and the last filter is logical that they need to be strikers or at least play in this position sometimes. The current first-choice striker of Foda in his 4-2-3-1 formation is Marko Arnautović, who throughout his career mainly played as a winger and sometimes a striker. Though in recent years he played mostly as a central striker. Due to that, we also will include Austrians in this pool who can play, for example, as a left-winger and central forward.

The main focus in this data analysis will be indeed on the qualities of the forwards in front of the goal, but since nowadays you expect from strikers not just to be positioned in the penalty box and wait for the ball, we will also look at other statistics and metrics. Since Arnautović is already 31 years old, it will also be interesting if we find some young and promising talents who could replace him in the upcoming years.

We kick things off by looking at the most important numbers for a striker: their goals and assists. To have a better comparison, we use the non-penalty goals instead of just the actual number of goals, and additionally, both values (as all in this data analysis) will be the ones per 90 minutes. 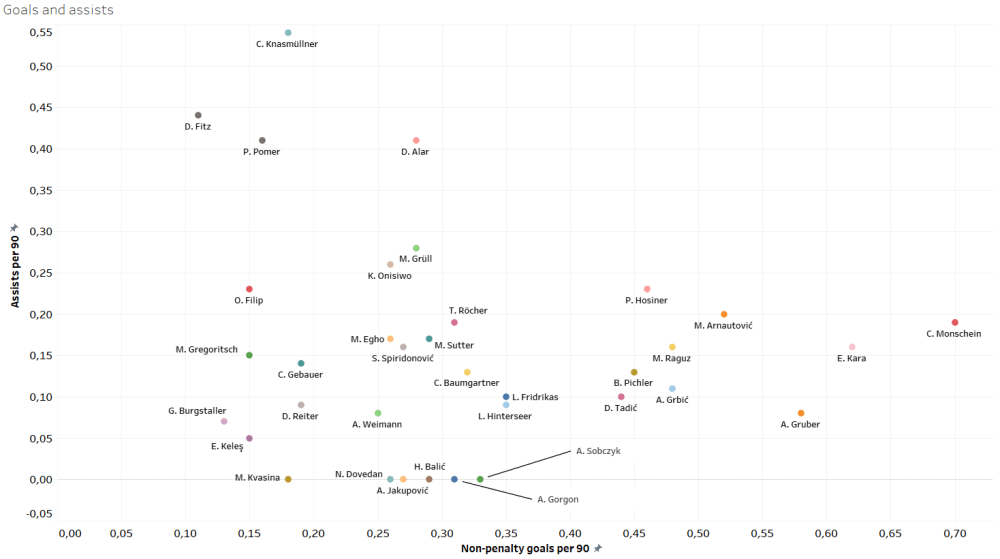 Christoph Monschein is clearly the player with the most non-penalty goals (0.7), but his number of assists is not that outstanding with 0.19. However, he was in this season in the Austrian Bundesliga directly involved in 20 of Austria Vienna’s 36 goals. Arnautović is the player with the fourth-best number of non-penalty goals per 90 minutes while Christoph Knasmüllner (who mainly plays as an offensive midfielder for Rapid Vienna) makes the most assists (0.54). At this point, I also want to mention Benedikt Pichler (22 years old), Adrian Grbić (23 years old), and Marko Raguž (21 years old) as these three are the three youngest players among the nine men with the most non-penalty goals.

Next, we want to dive a bit deeper into the forward’s qualities in front of the goal by looking at two interesting metrics: the number of expected goals (xG) and the goal conversion. 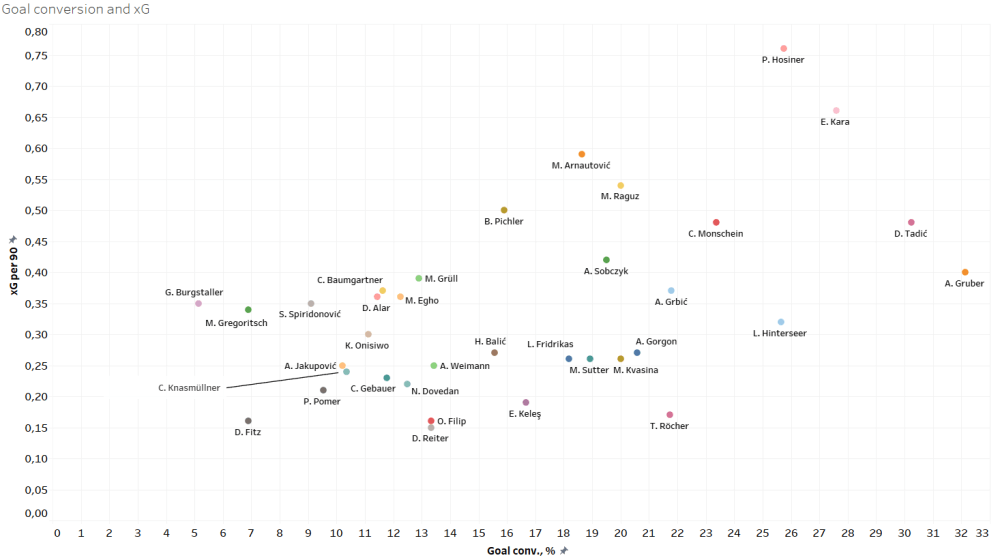 Again, Monschein, Arnautović, Grbić, and Raguž among the players with good values, but this time other men have the very best. Philipp Hosiner currently plays in the third tier of Germany and was at the beginning of his career one of the most promising Austrians of that time. However, the 30-years-old has with 0.76 the highest value for expected goals per 90 what shows that he brings himself quite often in good positions (he also scores 0.79 goals per game what shows us that he is also effective in front of the goal). However, at this point, you have to consider that he plays in the third German division while the majority of the other players in this data analysis play in a more competitive league.

Ercan Kara, Dario Tadić, and Andreas Gruber are the three other players who have decent values for both categories. However, Kara joined Rapid Vienna in the winter transfer window and has such good values as he was in the first half of the season one of the best strikers of Austria’s second division for Horn. Tadić has with Hartberg probably one of the best seasons of his career (he is already 29 years old) while Gruber rarely plays as a striker as he is more a winger.

Before we take a closer look at the statistics of some players, we will talk about four more statistics, but at this point, it is not just about searching for the best strikers, but also showing which kind of forwards they are. In the next graph, we have the numbers of key passes per 90 as well as the success rate in offensive duels. 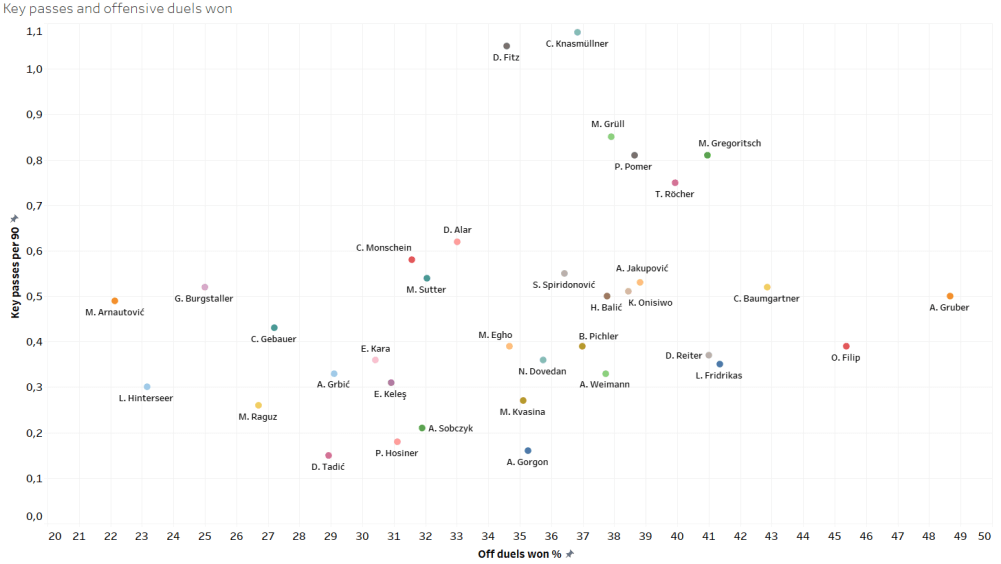 Gruber stands out with a success rate of 48.67% in offensive duels as the winger of Mattersburg has a great technique. Knasmüllner and Dominik Fitz are both men who can play as strikers but were in this season mainly offensive midfielders. Therefore, it is not surprising that these two have the highest values for key passes. Michael Gregoritsch who plays in the Bundesliga for Schalke 04 has decent numbers for both statistics as he wins 40.96% of his offensive duels and plays 0.81 key passes.

As the last two statistics, we have the number of passes to the penalty area per 90 minutes as well as the touches in the box per 90. This also may tell us a bit more about the type of players which we have in our pool. 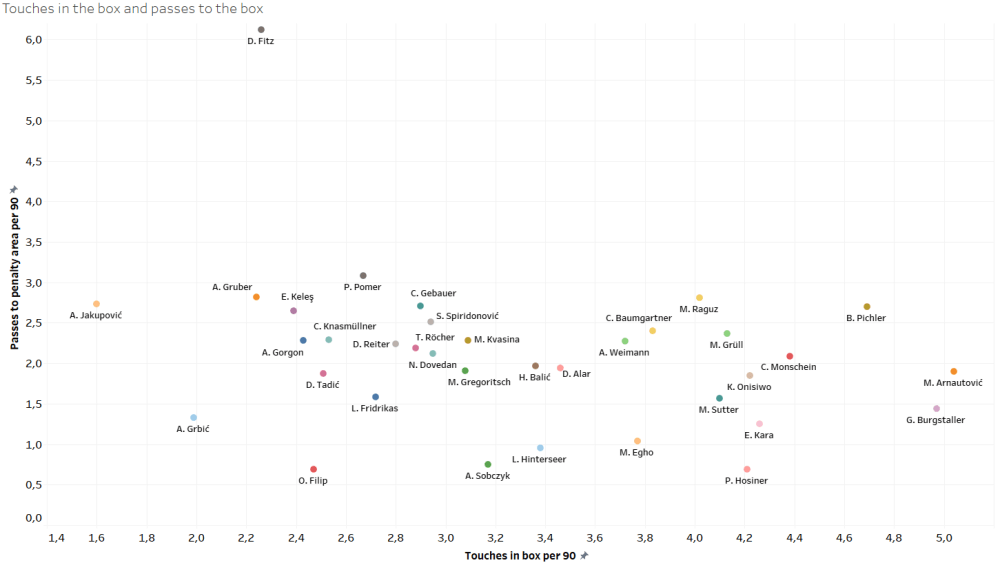 Again, Fitz stands out due to his amazing number for passes to the penalty box (6.12), but I need to note again that he mainly plays as number 10 behind Monschein for Austria Vienna. Arnautović (5.04) and Guido Burgstaller (4.97) are the two players with the most touches in the box. Raguž and Pichler are two players who have for both statistics good values. While Pichler can play as winger and striker, Raguž is whenever he plays always the central forward in LASK Linz’s 3-4-3 and surely one of the most interesting players of the Austrian Bundesliga as he sometimes drops deeper to get on the ball and find teammates in the higher lines with a pass, but then instantly gets back forward and in the box. This can be seen when we look at his stats in the graph above.

Next, we will look at the currently two best strikers of Austria as well as two younger ones who have the potential to play a central role in the national team in the upcoming years. 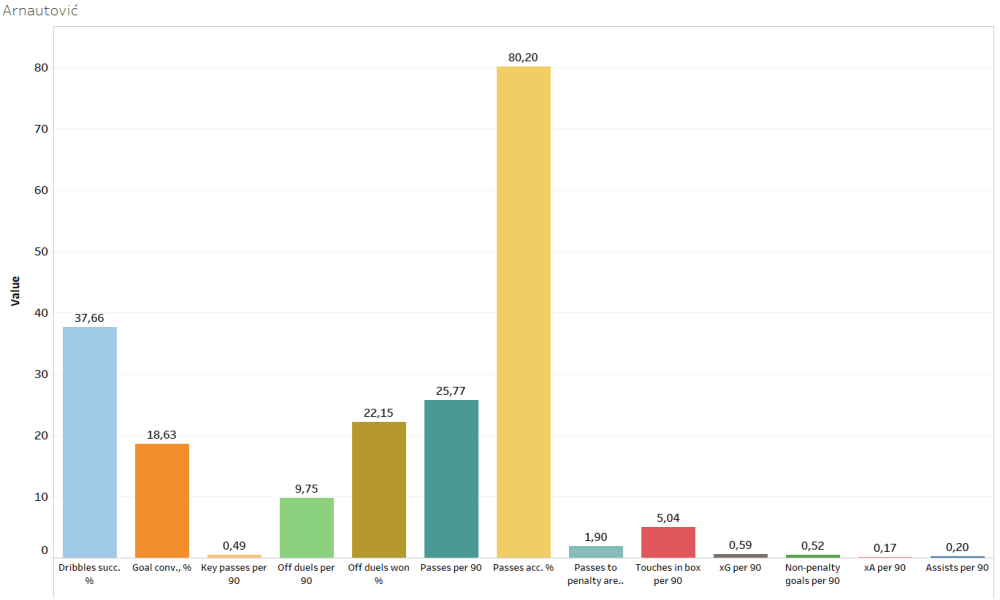 The 31-years-old is besides David Alaba of Bayern Munich the best Austrian player within the last 10 years and already played in the Serie A, the Bundesliga, the EPL and now he is in China. While he gets often criticized for his lack of work rate, team spirit, and aggression, the numbers clearly show that he is an amazing player. He scores 0.52 non-penalty goals, has an xG of 0.59, and provides 0.2 assists (all per game). It is questionable, how he would play when he would go into every game with more aggression, but he is still due to his qualities the first-choice striker of Foda. 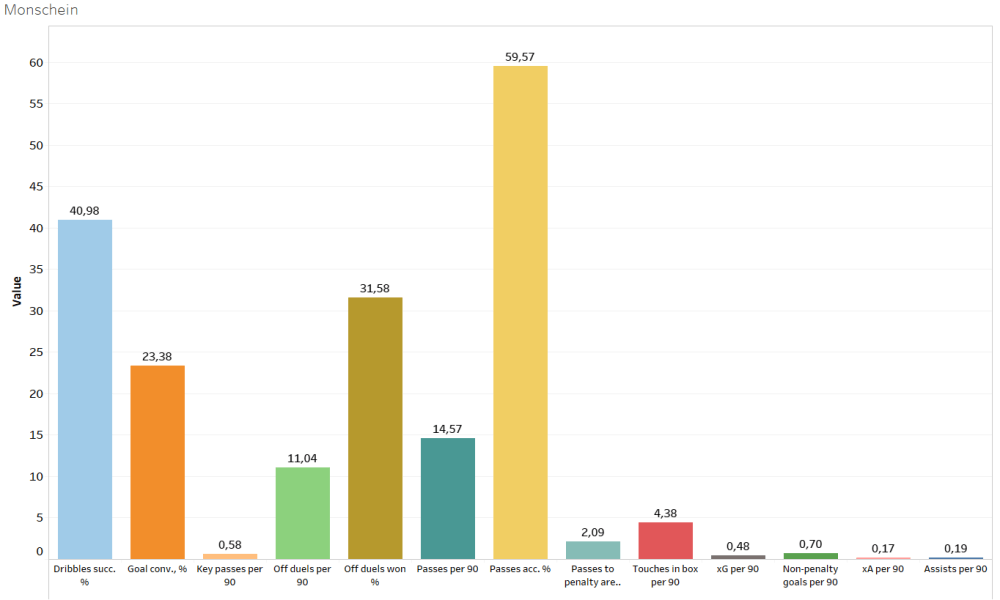 Monschein is behind Shon Weissman, Patson Daka, and Erling Haaland the player with the fourth-most goals in this campaign in the Austrian Bundesliga. With an xG-value of 0.48, he scores 0.7 goals per game and this already shows us how effective he is in front of the goal. However, he also provides 0.19 assists per game (he has the second-highest value for assists of all Austria Vienna players behind Fitz). He is neither a player who permanently drops deep to get involved in the build-up nor a striker who mainly stays up front. He is often the target for the first long ball as soon as his team won it to then keep possession until his teammates pushed forward. However, you also have to mention that he plays an amazing season even though Austria Vienna heavily struggles. Monschein hasn’t played for Austria yet, but if he can continue to show such good performances, it should be just a matter of time. 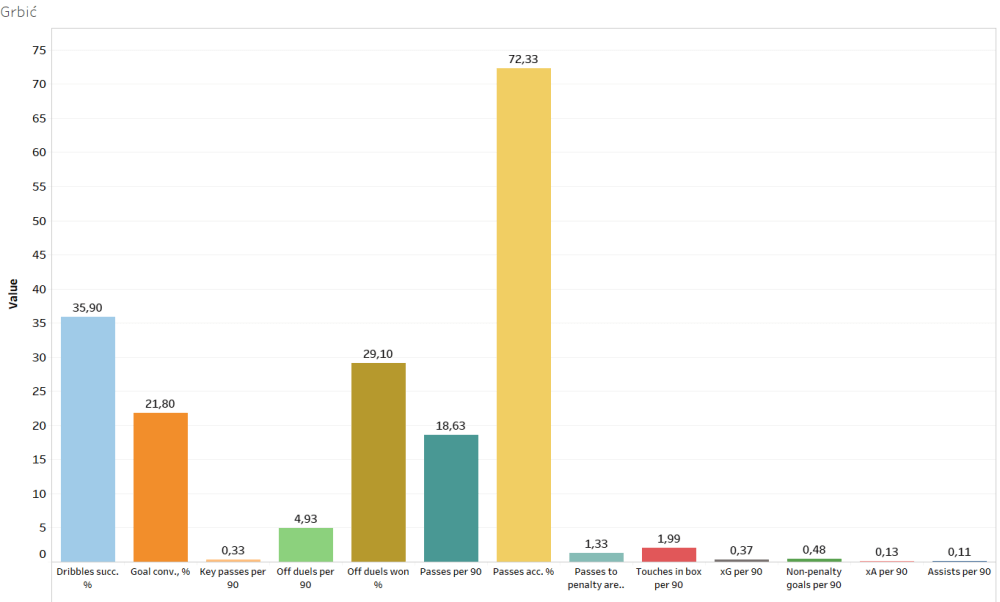 The Austrian forward plays for the Ligue 2 team Clermont Foot and showed in this season great performances in France’s second division. He played in 91% of the available time and always as the lone striker in their preferred 4-2-3-1 formation. With an xG of 0.37 and 0.48 non-penalty goals, we can see what a dangerous striker he is. With a goal conversion of 21.8%, he is also among the very best Austrian forwards in this category. However, when we look at the data, he has for almost all other categories quite low values what could mean that he is an out and out goal scorer. 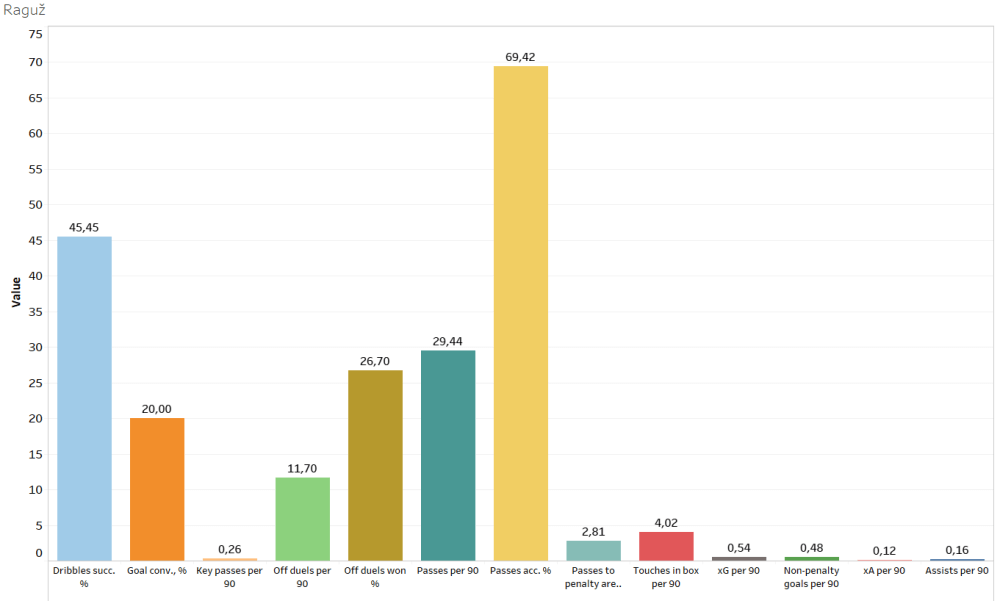 The young Austrian is in this season one of the most interesting strikers in the Austrian Bundesliga and  Valérien Ismaël primarily uses either Raguž or Klauss in the central forward position. He has a value of 0.48 non-penalty goals per game even though he is just 21 years old. Also, he has a goal conversion of 20% and is therefore among the top 10 players of our pool in this category.

Furthermore, we can see in the statistics that Raguž is not just a pure goal scorer, but he also likes to get on the ball and help his team when it comes to the build-up and the progression of the ball. He plays on average 29.44 passes and 2.81 passes to the penalty area. Additionally, he is often the target for long balls as he is with 12.46 aerial duels per 90 minutes the player of the Austrian Bundesliga with the third-highest value.

Chukwubuike Adamu is an 18-years-old striker of Liefering (RB Salzburg’s second squad) and maybe Austria’s greatest talent in the centre forward position, but hasn’t played in this season enough to be included in this pool.

However, Monschein is according to the statistics the best striker next to Arnautović but still hasn’t played a single game for Austria. If Grbić and Raguž can keep up their good performances in the upcoming months and years, they will surely have the potential to be regular starters for the national team.