Rodney Redes is a 20-year-old winger from Paraguay who recently signed for MLS newcomers, Austin FC, who will take part in the 2021 MLS season. Redes has the honour of becoming Josh Wolff’s first-ever signing. The talented winger in young, hungry and capable of scoring goals. His ample experience despite being so young will serve him well as the Paraguayan makes the jump to MLS. His move follows his talented countrymen such as Miguel Almirón, who signed for Atlanta United but now plays for Newcastle United in the EPL.

One of the main draws of Redes’ background is his experience in 81 matches despite being only 20 years old. The young Paraguayan took part in the 2020 Copa Libertadores, making eight appearances. This tournament is recognized as the highest level of football in South America, similar to the UEFA Champions League for Europe. These big-match experiences are invaluable at such a tender age and Redes constantly shows versatility and desire while playing football.

This scout report will look at his individual qualities and an in-depth tactical analysis will examine how Redes contributed to Guaraní’s tactics while playing in the Paraguayan Primera Division. Austin FC will be hoping there is more to come from this exciting young player.

One of Redes’ most promising areas of his game is his ability to create chances and get shots on goal. Every forward becomes more valuable as they begin to create or convert goalscoring opportunities, and that is exactly what Redes has done thus far in 2020. His xG in the seven matches played in the league was a reputable 1.65. The Paraguayan scored two goals in seven league matches, and three goals in the eight appearances in the Copa Libertadores. This goalscoring record caught the attention of Austin FC as they look to add attacking firepower which matches the culture of the club. February marked the start of Redes’ explosive goalscoring form where he scored a goal in four consecutive matches.

The reason Redes can get into goalscoring positions is his high energy, dynamic nature, and ability to beat players in 1v1 dribbles. What is most impressive is his activity around the box. Redes is classified as a winger, but he has capabilities to play anywhere in the forward area. This attribute creates danger for the opposition as he is comfortable cutting inside, dribbling down the line or making runs through the middle of the pitch. His high energy, combined with his strong stature, creates a versatile player.

Austin FC can expect Redes to get the ball and take lots of shots on goal, which will yield results. His willingness to get into the box means results will come as he takes chances that are more likely to score considering his position on the pitch. The shot map below illustrates where Redes’ shots come from. These statistics are based on 2019 performance. Of the 51 total shots taken, 22 were on target with a goal conversion rate of 15.7%. What is promising about Redes is he gets in the box. 39 out of 51 shots taken were from inside the penalty area which resulted in six goals (out of eight last season). 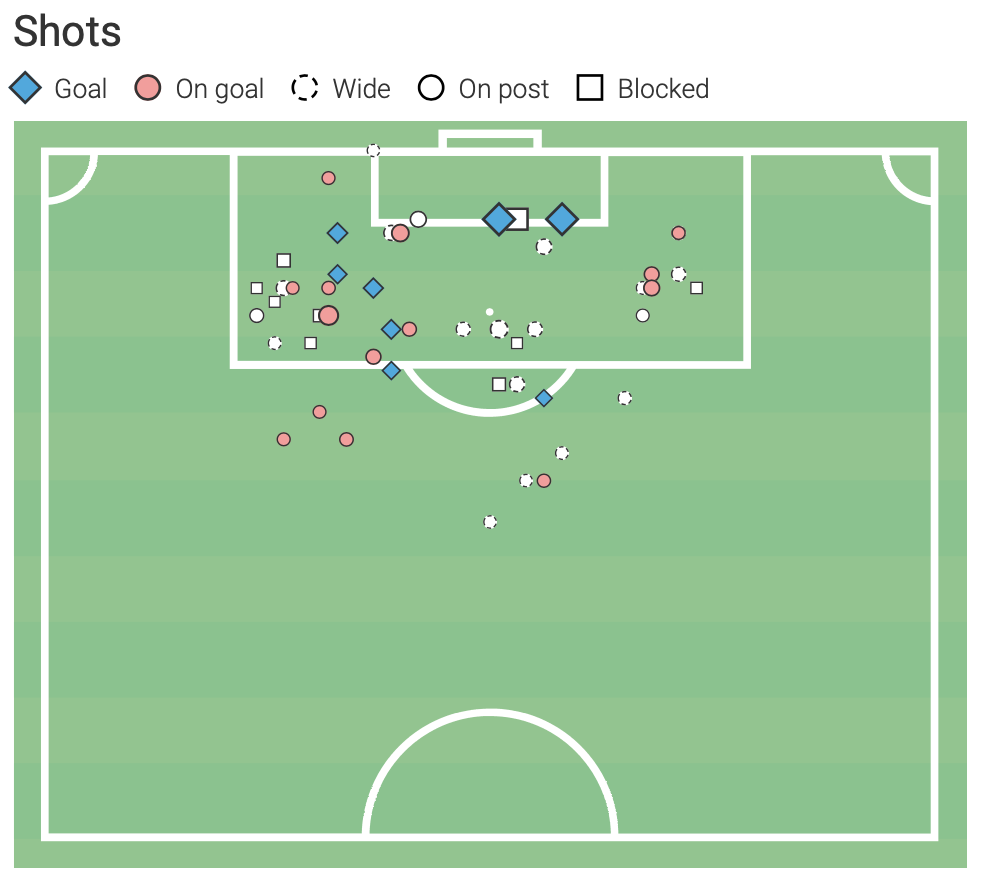 This analysis shows how Redes can be most effective. By using his energy to encourage runs into the box and taking on the outside backs, Redes can be valuable to the team.

An example of Redes doing what he does best is shown in the analysis below. The young Paraguayan isolates his defender and is in a great situation to create a chance on goal. He is around the box and intends to get into a goal-scoring position. In this situation, Redes cleverly flicks the ball over the defender’s head to beat his man. His choice in this situation was difficult to execute, but the Paraguayan’s creativity proved decisive. Redes successfully beats his player and is in on goal. 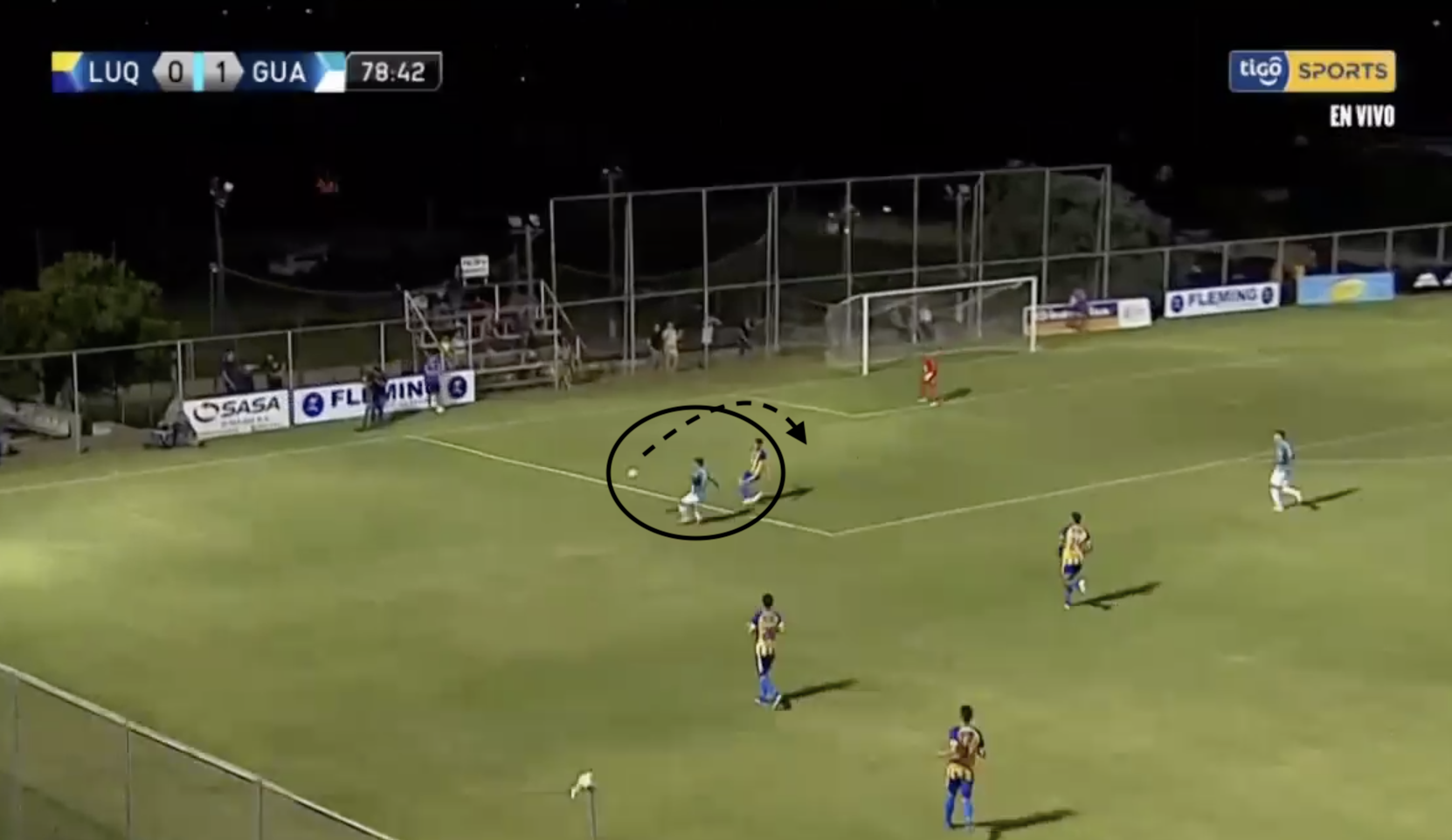 This action leads to Redes being in a favourable position in the box to create a high likelihood of scoring due to him being inside of the box. The fact that most of Redes’ strikes occur inside the box shots how he is capable of beating players, just like in this example. This action ended in a goal for Redes. 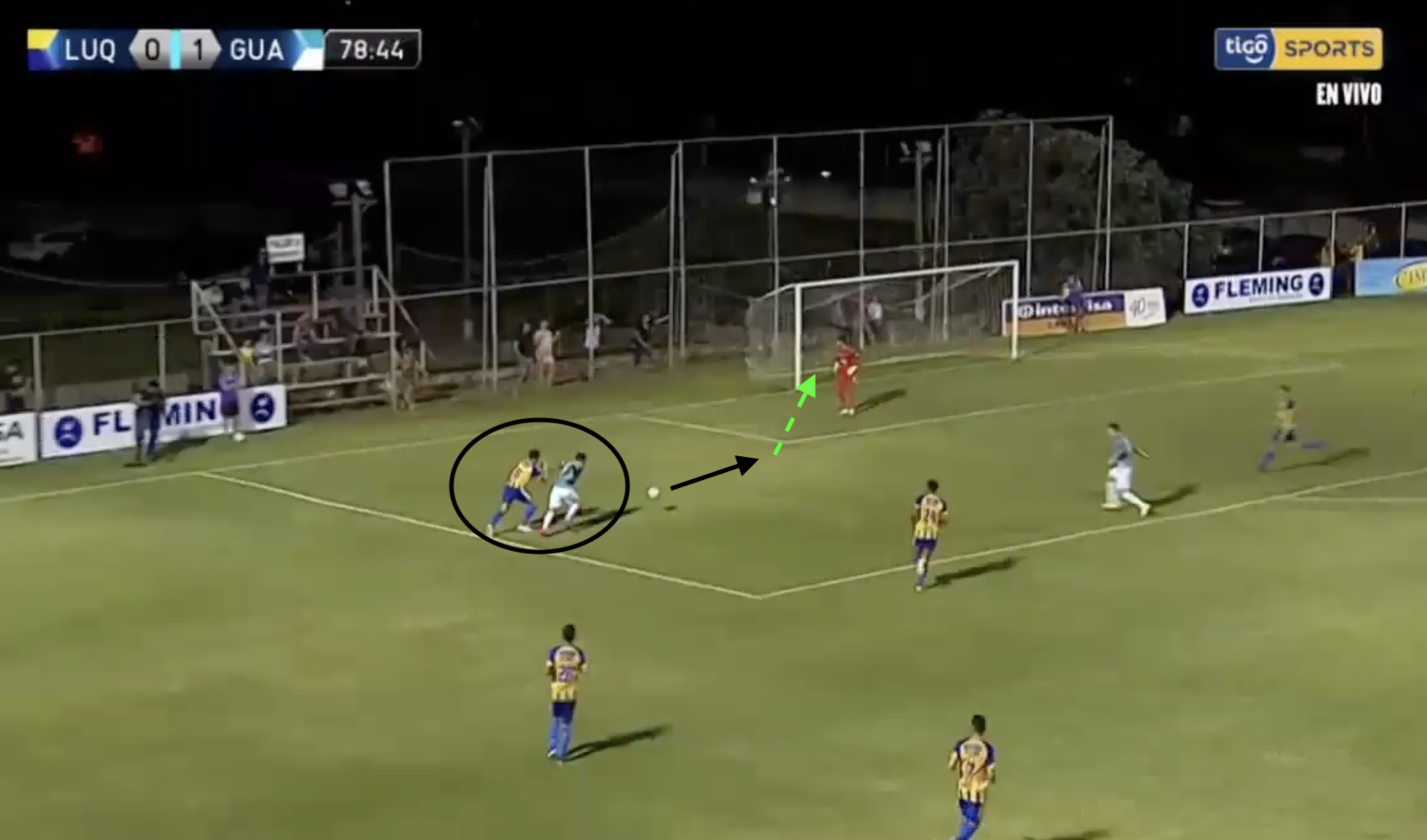 The sequence above demonstrates how Redes can be effective in 1v1s. Despite this talent, Redes does not take on players as much as he could. Redes attempts 4.39 dribbles per 90 compared to the league average of 4.22 (in 2019). For a player with such drive and capability to beat players, he should be encouraged to take on his defender more. This leads to the claim that the Paraguayan is less of a traditional winger and more of an outside forward. He could theoretically play in a three forward line or a two striker formation with his ability to get in the box and beat players.

Furthermore, his energy to get touches in the box is phenomenal compared to other players in his position in the Paraguayan Primera Division. Redes has 4.66 touches inside the box per 90 minutes compared to the league average of 2.11 touches inside the box per 90 minutes. The youngster doubles the average, a number that has true meaning. This tendency relates to his shooting statistics explained earlier in the scout report.

Another area of Redes’ game is his personality on the pitch. What is important to note is data does not always show the truth about a player and his or her personality can play a major part in their performances and development. Redes is a team player who has the hunger and desire to win the ball back.

Below is a map of Redes’ recoveries based on 2019 statistics. While he ranked fairly low with only 3.05 recoveries per 90 minutes, when the highest in the league (based on all field players) was 16.02, that does not tell how valuable Redes is. What is exceptional is the dispersed nature of his recoveries. This image shows the field as it goes left to right and it shows that Redes is everywhere on the pitch. He will make an interception or tackle in his own half but is also capable of pressing high up the pitch while counter-pressing. Such an array of locations show how much energy and desire Redes has while defending. 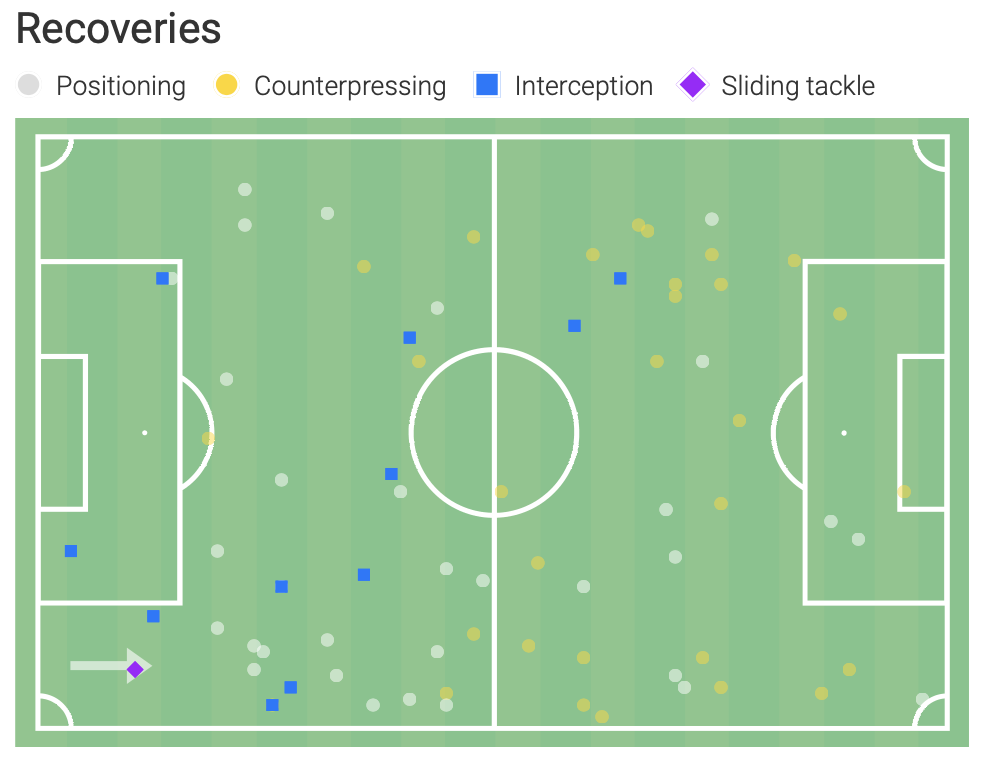 A similar display of his work-rate is seen in Redes’ heat map. Despite being a forward, Redes is constantly popping up in multiple areas of the pitch. In the heat map below, even though Redes is most active on the bottom area of the heatmap, he is still very active in the defensive half too. Most wingers will not defend as effectively, but Austin FC has acquired a hungry talent who is capable on both sides of the ball. 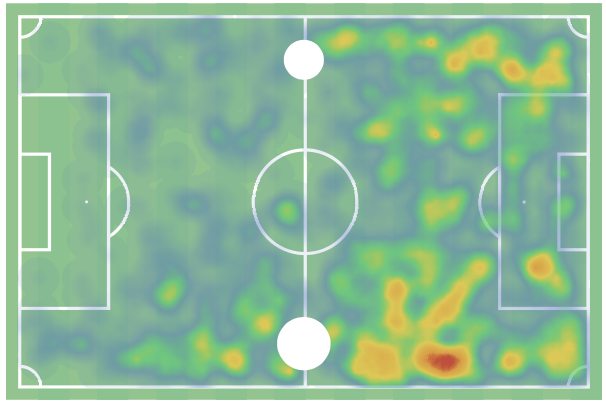 An example of Redes’ ability to track back is shown in the analysis below. Guaraní was up 1-0 and the opposing team hit them on the break. The only other player in the mix defensively is the centre-back who is scrambling to cover the space around him. The forward was arriving at the ball and was in a 2v1 opportunity. However, despite Redes being a forward player, he has the awareness and drive to track back to help out the team when they were disorganized. Notice the five players on the right side of the image who are completely out of the play. 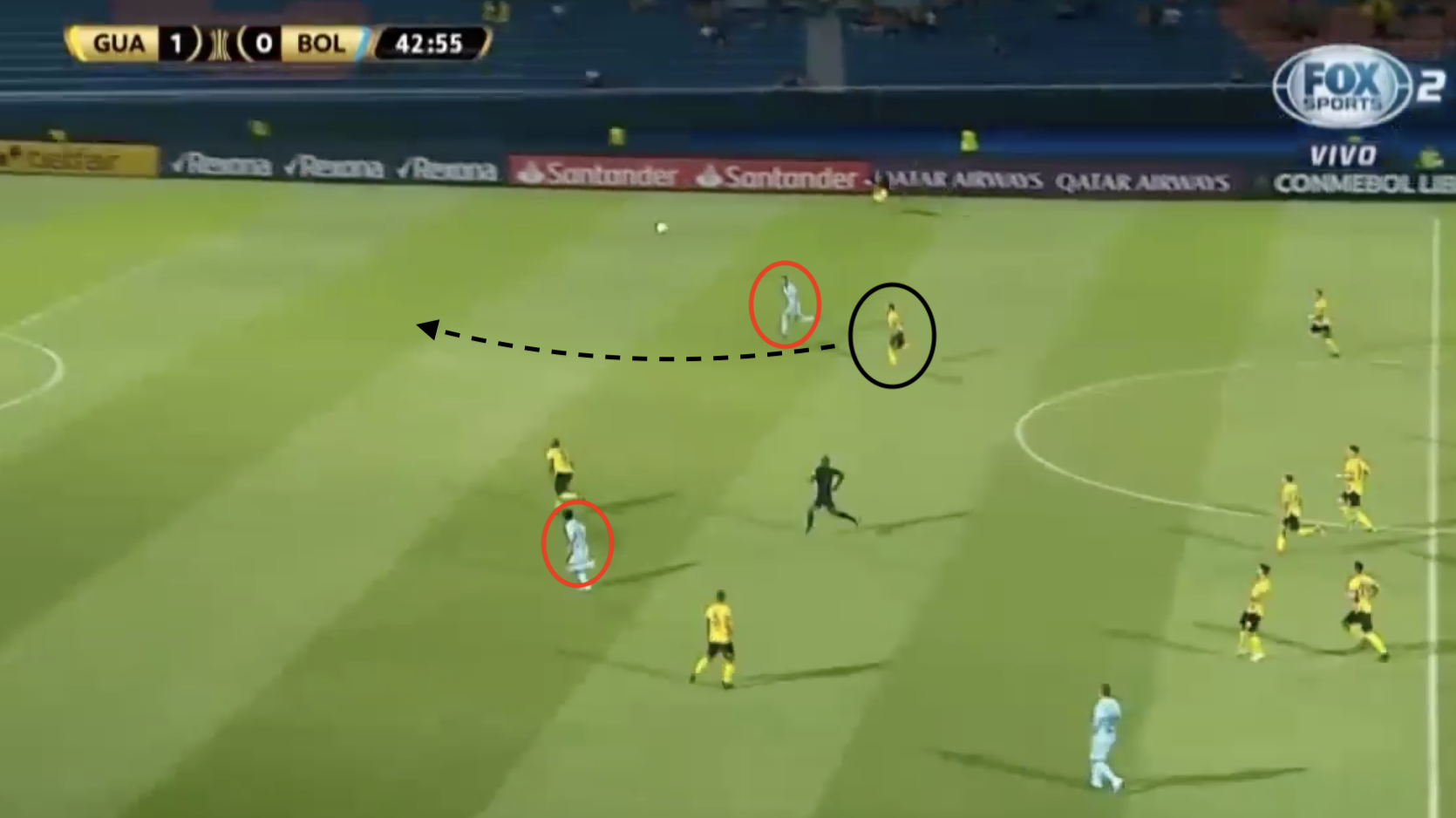 Redes shows his pace to get ahead of the other player who was trying to get onto the end of the ball that could have led to a goal. Then, Redes has the intelligence to clear the ball and end any danger. This sequence shows so much more than a tackle. The action for the youngster to get back and defend despite being an attacking player shows his personality, his hunger and his attitude as a player. These reasons are exactly why Austin FC decided to make Redes their first signing. 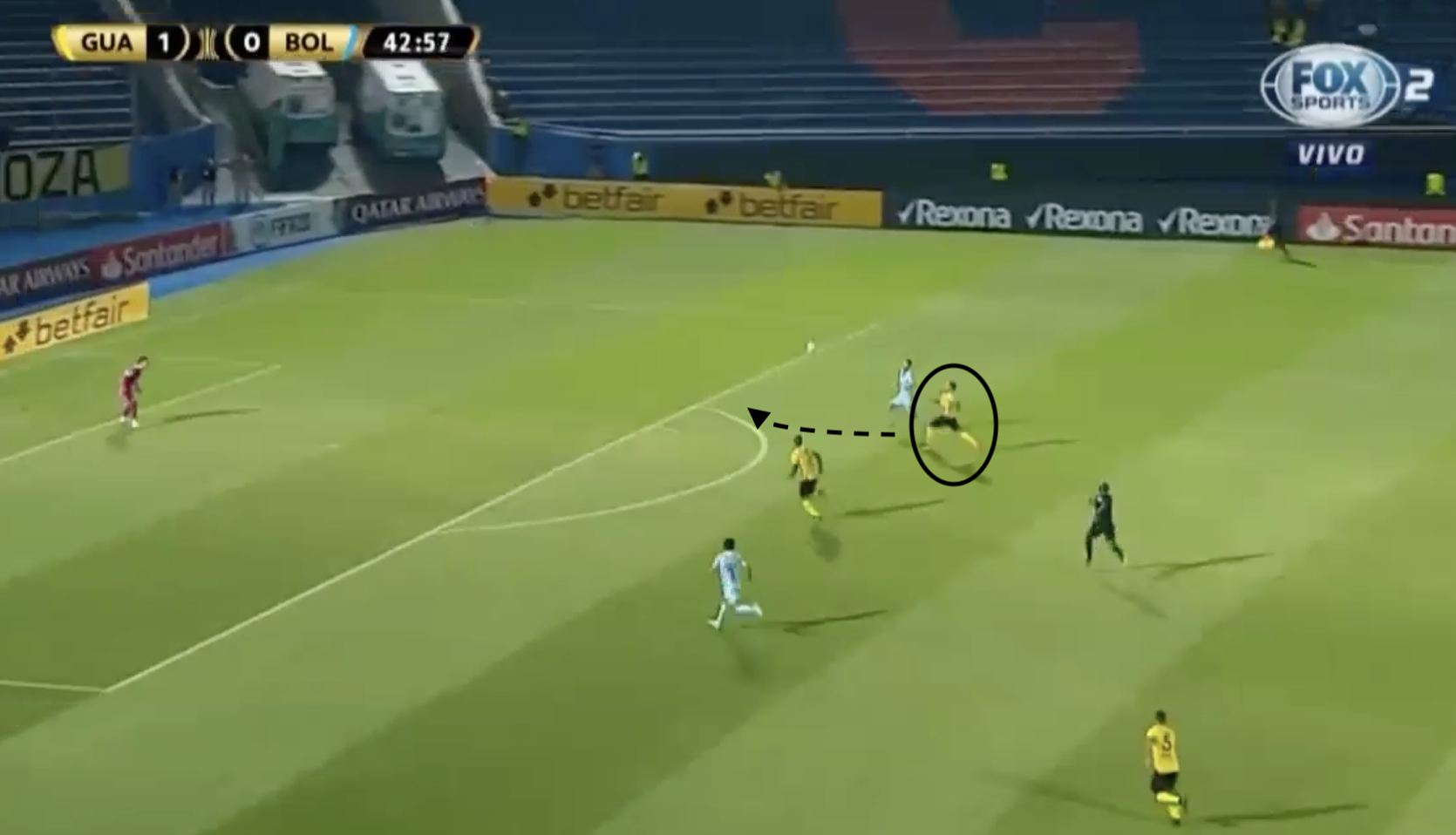 Overall, this scout report explains the two major reasons why Austin FC signed Redes. He is a player who is capable of getting in the box to score goals while providing the team with a strong sense of desire when winning the ball back in his own half of the pitch. Having a player in the squad that couples his ability and attitude will go a long way in his development individually and the team as a whole. Such attributes lead to him being a very dynamic player. This scout report highlights the need for Redes to be getting into the box to be most effective, but he can also track back well. That statement is incredibly rare in a player. It will be interesting to see how his attacking production continues as he joins up with the squad in Austin in early 2021. While Austin FC could look to secure more high profile signings, players like Redes will become incredibly important for Wolff as he looks to build a culture at the club.

Of course, there are areas of Redes’ game that can improve, but for a player of 20 years old, the Paraguayan has ample experience and desire to make an impact in MLS.