Mark-Anthony Kaye is a 25-year-old central midfielder who plays for Los Angeles FC in Major League Soccer. Kaye has had a testing path to the top division of American soccer after spending many years in the USL Championship.

The Canadian international played for the Wilmington Hammerheads, Toronto II, and most recently Louisville City before he got his chance to breakthrough at the top level. On February 5th, 2018, Kaye signed with LAFC marking his debut season in the MLS. He has earned 14 caps for the Canadian national team and has featured in multiple Gold Cups for his country.

The six-foot, one-inch tall central midfielder is a dominant figure on the pitch who utilises his size and height to his advantage. Kaye is very much a box-to-box midfielder who is capable on both sides of the ball. These attributes lead to him starring at the left of the midfield three for LAFC. Bob Bradley, LAFC’s manager, favours Kaye in most matches. Last season, he started 27 matches out of 32 appearances in the MLS, making him a steady and consistent player for LAFC.

This tactical analysis and scout report will break down Kaye’s strengths and weaknesses in the electric LAFC team.

What makes Kaye such a fantastic player in the MLS is his ability to get box-to-box. The Canadian is stationed on the left-hand side of a midfield three, allowing him to have a lot of freedom on the pitch. While the defensive midfielder, Eduard Atuesta holds, Kaye can take up positions higher up and affect the game with the passing ability that he possesses. This position is similar to that of Paul Pogba while he was at Juventus, where he had much more freedom than while under Jose Mourinho’s management at Manchester United.

As seen in the heat map below, Kaye is a presence while on both sides of the ball. This is a major advantage and a key reason why the 25-year-old is such a key player to incorporate into Bradley’s tactics. He has attacking and defensive capabilities. Furthermore, due to his immense size and physicality, it adds an extra layer to Kaye’s differentiators. It is rarer to find a player so tall but also so creative like Kaye. 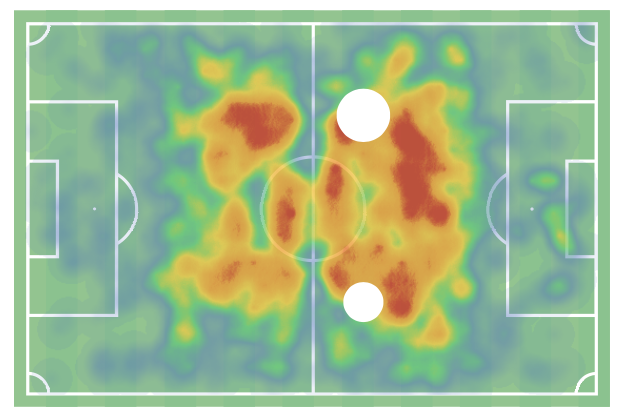 While truly embracing his box-to-box role, Kaye constantly finds himself in and around the top of the box to be the main pivot for the midfield. LAFC has an attacking tactical setup, with Carlos Vela and Brian Rodriguez stationed out wide due to their ability to cut inside and score goals. This allows Kaye much more time and space at the top of the box as one would expect.

In the analysis below, an example of the spatial awareness and positioning of Kaye takes affect. Rodriguez is on the ball out wide and this time, Vela has come into the middle of the pitch. Kaye drifts into the centre of the pitch just ahead of the opposition’s 18-yard box. In this case, Kaye becomes an auxiliary central-attacking midfielder. Bradley likes using this tactic because he knows Kaye has both the creativity to play a key pass and the energy to get back in transition. These attributes make a strong box-to-box midfielder. After Rodriguez plays the ball to Kaye, he drives into the box and tees up Diego Rossi for a shot. These moments occur frequently for Kaye as the tactics of LAFC allow for spacing to open up for the Canadian. 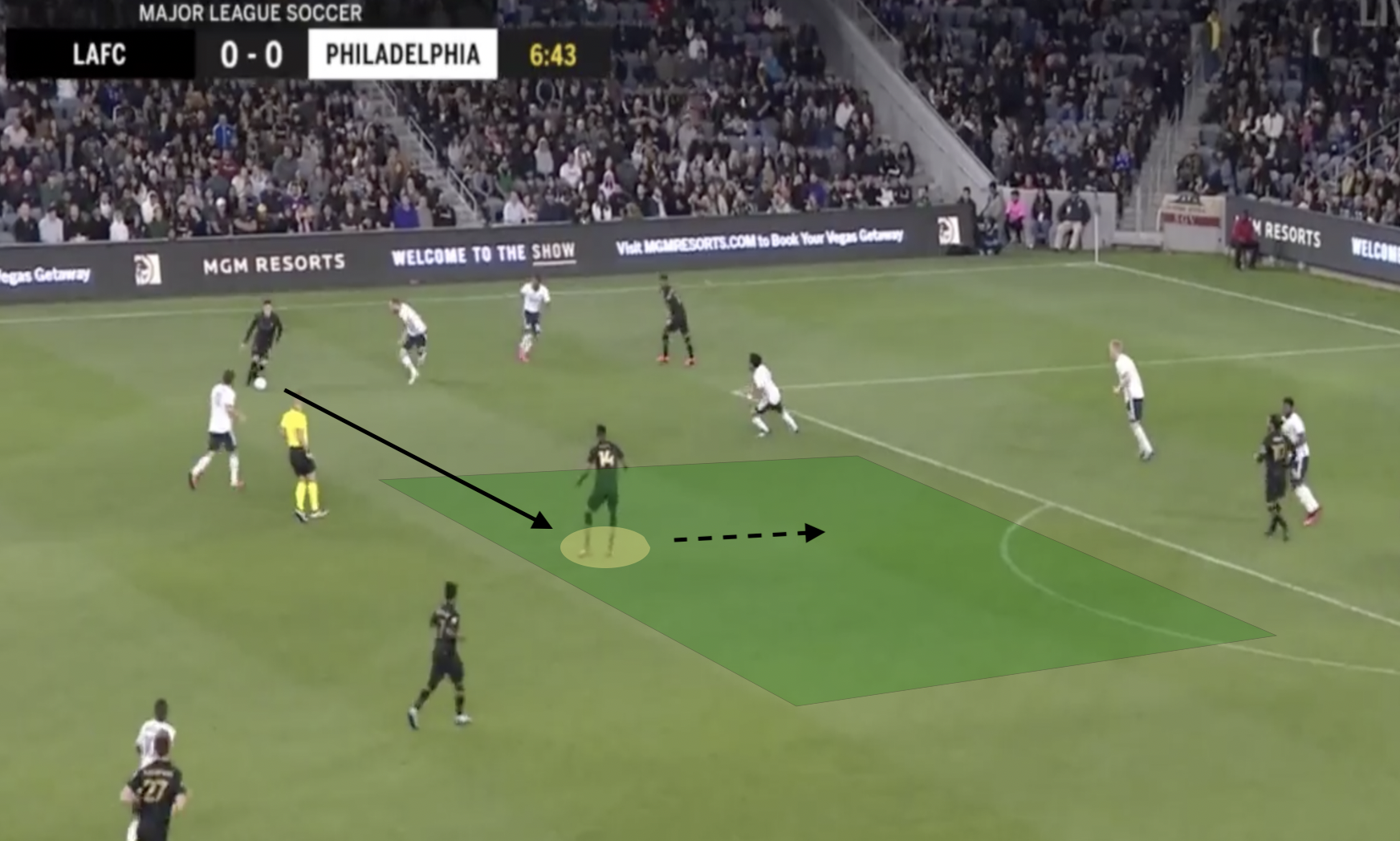 Another key part of what makes Kaye such an effective box-to-box midfielder is his vision. A player’s vision can help them predict the next pass before the opposing team is ready. In Kaye’s case, his tremendous passing range combined with his vision is what makes him incredibly well-rounded, again drawing comparisons to Paul Pogba.

These tools lead to Kaye being a very handy-worker in the midfield for Bradley. The Canadians passing performances have been immense during the last year and thus far in the current MLS season. Last year, Kaye registered 12.93 progressive passes per 90 minutes, which was just behind the highest amount of 14.7. This year, Kaye averages 12.67 progressive passes per 90 minutes in the two matches played. This shows his consistency and dominance in this statistic. Kaye is constantly looking up and trying to move the ball forward. This couples with Bradley’s tactics that favour extremely fast-paced attacking football. Bradley likes getting to ball to the feet of his wingers, and Kaye’s passing tendencies show that. 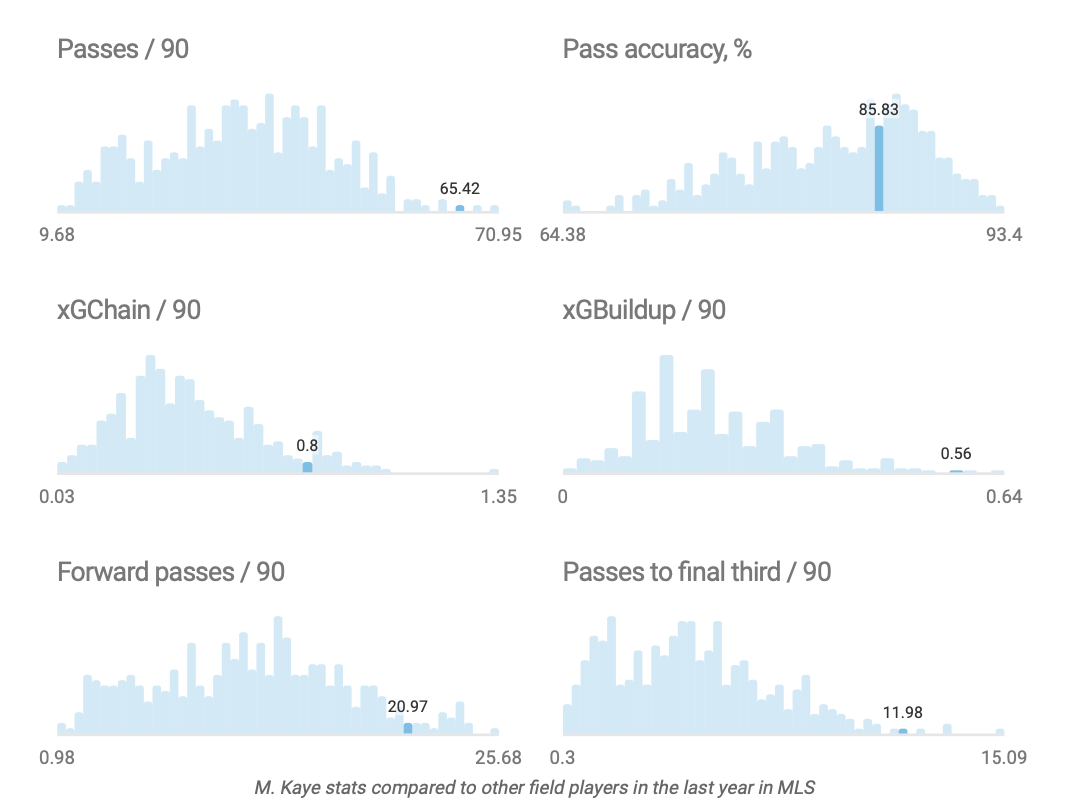 When passing in key areas of the pitch, Kaye is in the elite category once again in the MLS. These passing statistics tell a story that ends with Kaye being regarded as an attacking weapon while on the pitch. The Canadian averaged 65.42 passes per match last year, with 11.98 of them entering the final third. He is in the top percentile for almost every passing statistic because of his dynamic playmaking ability. Just because passes are forward do not mean they are effective, but Kaye contributed to an average xG of 0.56 while in the build-up phase of the attack.

In the analysis below, Kaye showcases his passing ability and creative spark. As usual, he is driving forward with the ball. It is an incredibly congested midfield due to the shape of FC Dallas. Despite not looking like there was an option to play a ball through, Kaye picks out a penetrating pass. The ability to find this ball is rare in a box-to-box player who may lack creativity –  this is not the case for Mark-Anthony Kaye. 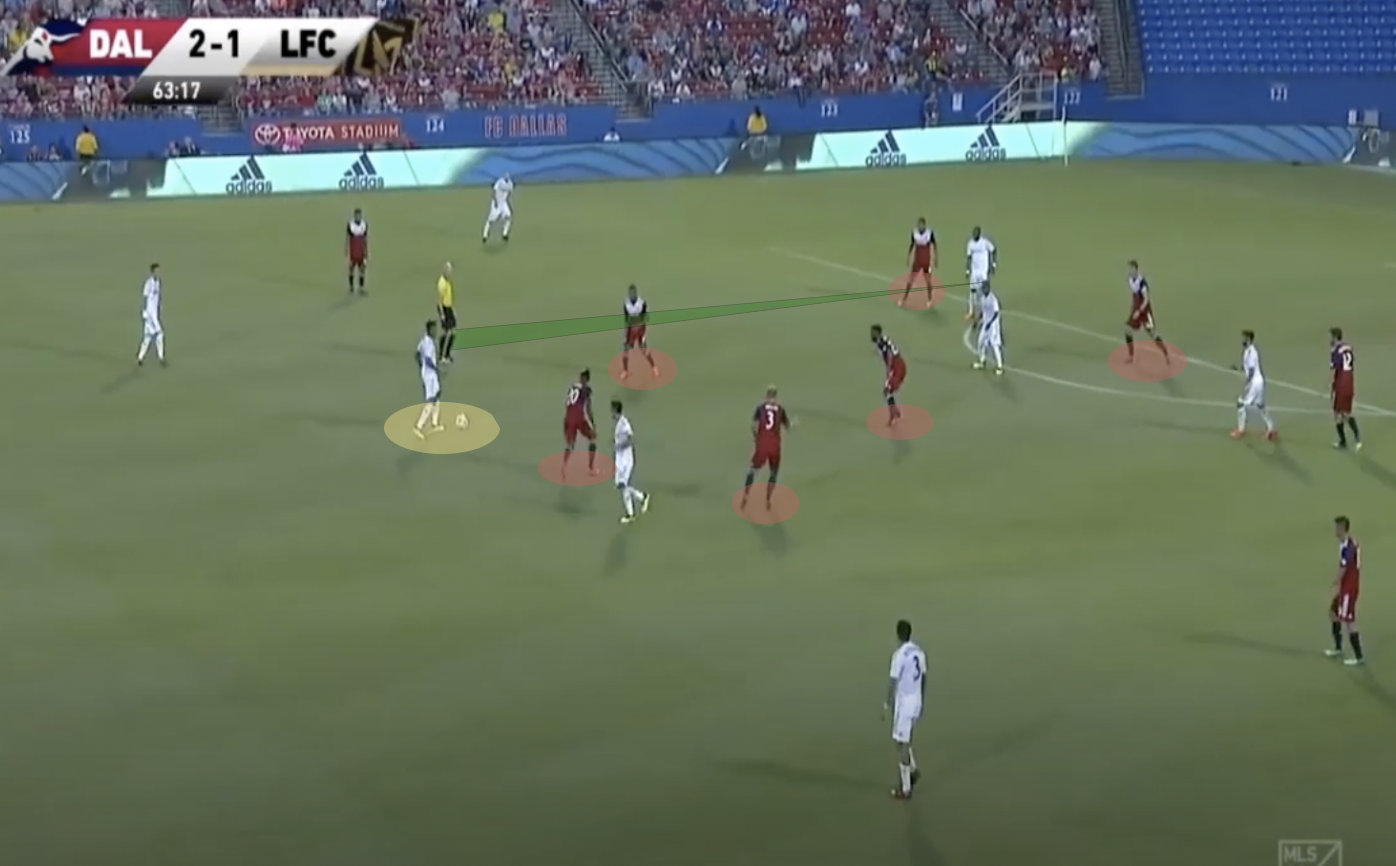 After identifying the key pass that would completely split the defence, Kaye sizzles that ball into the striker’s feet who then quickly turns and is truly in on goal with only the keeper to beat. Again, the vision for Kaye to identify then execute a pass of this difficulty is an outstanding play from the Canadian. He beats six players in a tight area with one pass, something that fantastic playmakers can do. 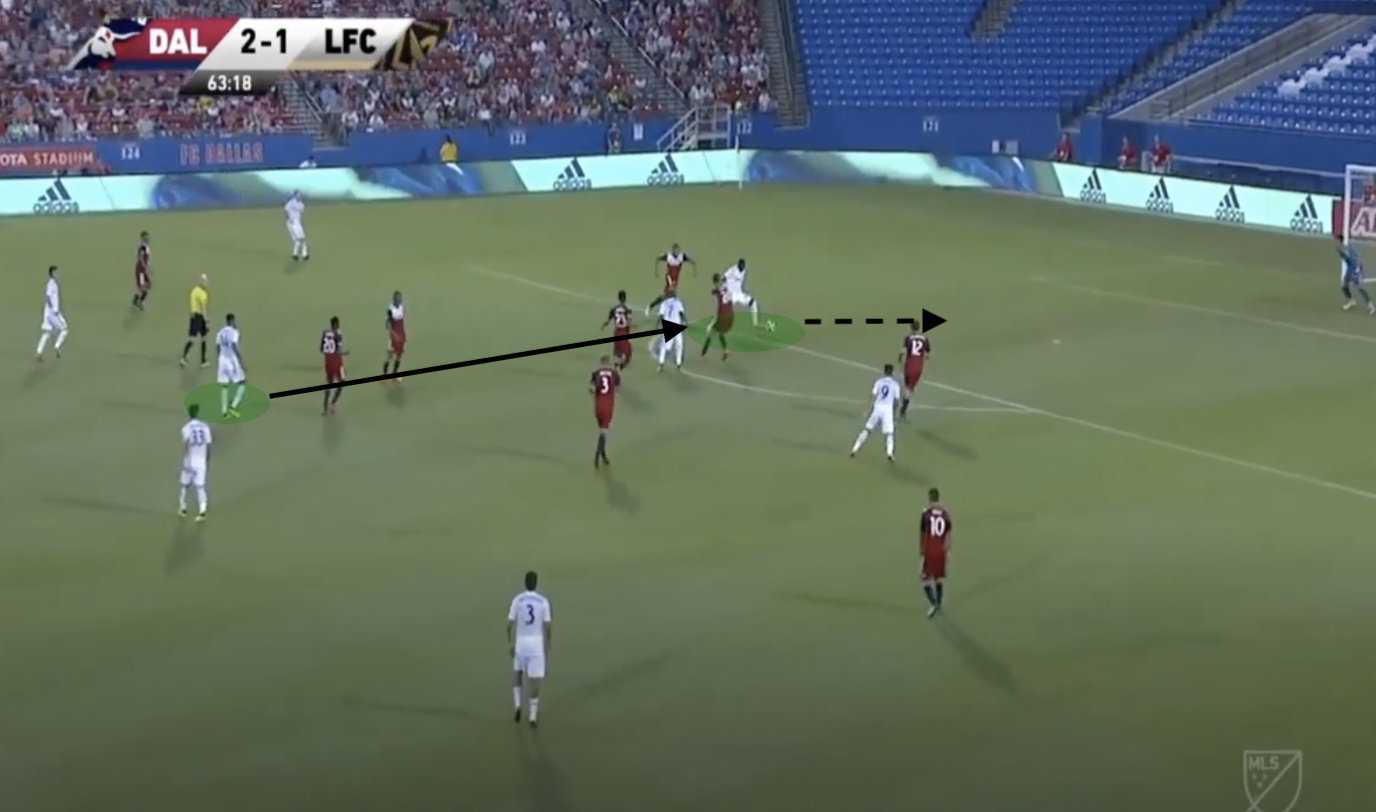 It is important to analyze box-to-box midfielders’ defensive capabilities too. While it is clear in this scout report that Bradley utilises Kaye more for his attacking and passing ability, his energy and physical presence are extremely helpful while defending. When looking at Kaye’s defensive statistics, nothing jumps out as exceptional. He averages a 58.11% defensive duel win rate and wins 44.44% of his aerial duels. While this may seem like an area Kaye is lacking in, the statistics do not always tell the full story.

Where the Canadian international excels in is his energy on the pitch. For individuals concerned with how that translates to statistical advantage, Kaye’s counter-pressing numbers are above average when comparing him to the rest of the league. Kaye averages 4.42 counter-press recoveries per 90 minutes (the highest being 7.3). This is a testament to the tremendous energy and effort Kaye exhibits while playing football. A player’s drive and attitude are somewhat unmeasurable, and it can constantly be the difference-maker.

An example of this energy occurred during injury time in the first half for LAFC vs. Philadelphia Union. With less than 50 seconds to go, Kaye gets dispossessed in the final third of the pitch. LAFC has six players in the box (including Kaye), which leaves them at an incredible disadvantage as the Philidelphia Union launches a counter-attack. 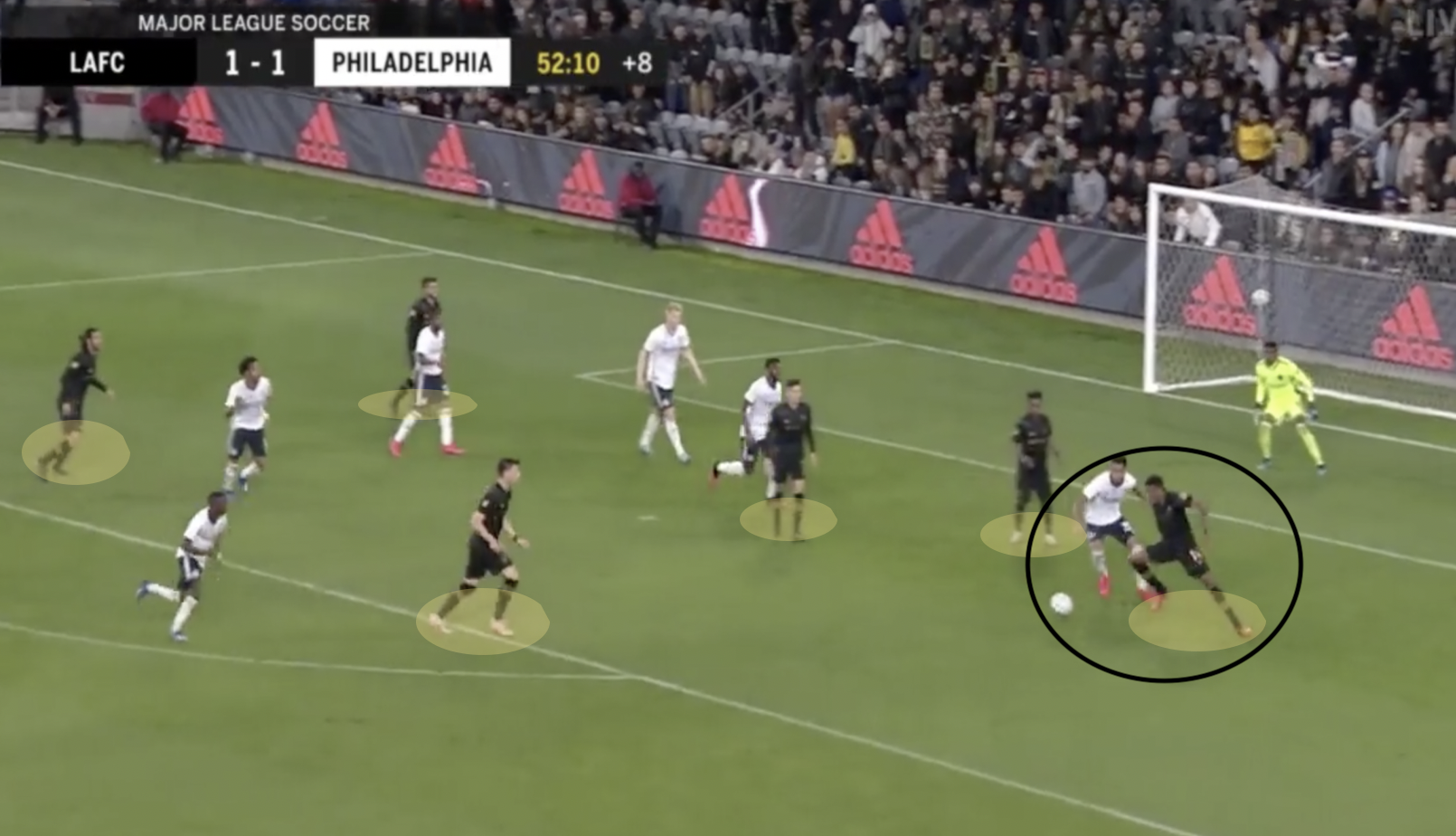 As the ball is in transition, Kaye shows his drive and energy to get back and attempt to win the ball. While this may be an obvious reaction considering he lost the ball, take note of the other LAFC players. Kaye is chasing after the ball while his teammates seem content at the top of the box. The Canadian’s work-rate puts him in close proximity with the ball. Despite not winning back possession, this sequence demonstrates Kaye’s energy. 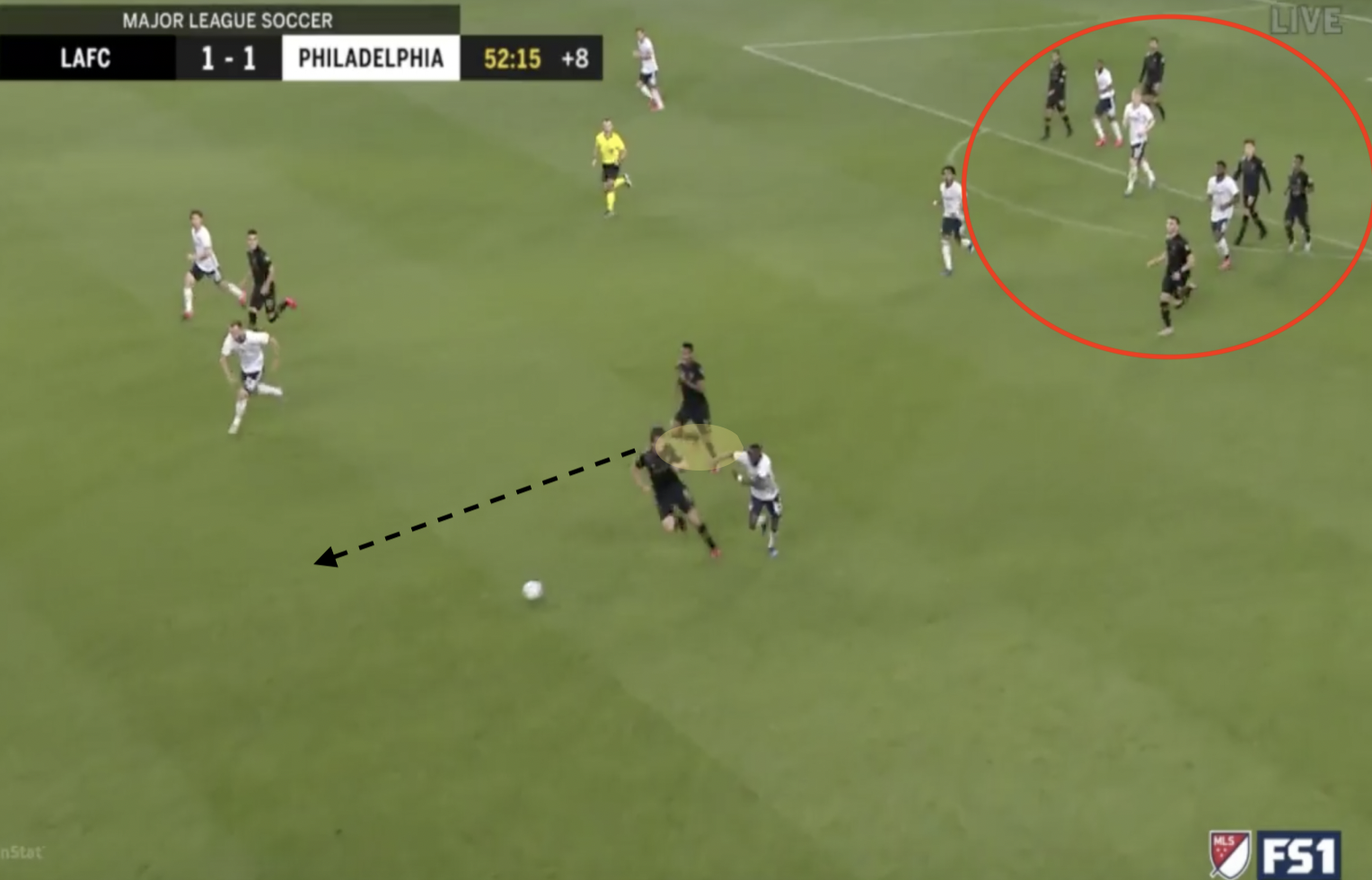 Mark-Anthony Kaye is a fantastic box-to-box player that works incredibly hard for Bradley and his teammates. Despite not being the build or having the agility of a typical playmaker, Kaye exceeds many expectations. His abilities create a mould of a dominant midfielder who has a bright future.

Defensively, there is still some work for Kaye to do if he is to reach the next level of his development. Despite this claim, it may be best for Bradley to continue to encourage Kaye to play the way he is. Clearly, Bradley’s tactics and instructions pay dividends for Kaye and LAFC. There is no need to change something if it is not broken. In Kaye’s case, perhaps focusing even more on how to get him involved in the attack will further his development. While he is currently viewed as a box-to-box midfielder, the Canadian international has attacking midfielder qualities. If Kaye can start to find a few more goals to add to his arsenal and really continue to supply key passes into the final third at the rate he is doing, the Canadian will be one of the best midfielders in the MLS.