Sporting CP lost one of their best performers in the face of Bruno Fernandes in 2020 and there was doubt whether the team would be able to find a suitable replacement who could support the team’s attacking actions successfully.

Months after reaching an agreement with Manchester United for Fernandes, the club secured the signature of Pedro Gonçalves – ‘Pote’ from Famalicão. The then 22- year-old attacking midfielder didn’t bother from the high expectations and had a perfect start to his career with the Lions, scoring 23 goals and assisting five more in his first season with them, leading them to the league title. The following year was equally as successful, although he was used as a winger more consistently, which resulted in him providing 14 assists and scoring 15 goals.

In 2022/23, Pote has already established himself as one of their best performers, although the team had a rough start to the campaign and are currently fifth in Primeira Liga, having difficulties defensively and being knocked out of the UEFA Champions League where Tottenham topped the group.

His versatility has allowed the manager Rúben Amorim to use him in different roles and positions in his favoured 3-4-3 formation. The player’s technical abilities and movement are the main creative force for the team in the opposition’s half and his actions often result in creating goalscoring opportunities.

In this scout report, we use tactical analysis to examine Pote’s contribution to Sporting’s tactics and explain how he replaced his predecessor.

Sporting are an attack-mined team who like to control the game in the opposition half and expose their opponents through a lot of movement, especially on the flanks. The team rely on having more possession (63.8%) and dominating the opposing teams. And while they do try to create as many goalscoring opportunities as possible, their overcommitment to crossing sometimes makes it difficult to use their creativity.

The team highly rely on gaining control in the wide areas where they often opt for link-up-play to progress the ball, which later results in a high number of crossing attempts (19.73 per 90). They manage to balance out both flanks by bombarding the box with crosses from both sides, although their completion rate is far from satisfying, which takes away from their attacking explosiveness.

Their ability to score from different methods makes them successful up front, having scored with headers, from corners and from outside of the box on multiple occasions.

Sporting’s successful ball progression is a result of the players’ individual skills and their dribbling abilities in particular. Many of them use their composure to take on opposing players and distribute the ball to the advanced areas. Amorim’s side are actually first in terms of dribbling frequency and their success in 1v1 situations allows them to hold on to the ball for longer, which respectively results in their high possession rate. The players’ ability to retain possession in the opposition half is impressive and it directly affects their defensive performance.

The team generates the fewest ball losses per 90, which results in conceding only 6.96 shots on average, however, the areas they allow these shots to come from and some individual errors often make the difference despite the overall solid performance.

With his ever-changing position, Pote is able to show his versatility and support the team in different aspects. This season he has been used as LCMFand LWF but also as a central forward. Amorim is trying to use him to his strengths and employ him wherever he feels he can be most dangerous at. That’s why Gonçalves covers quite wide areas and despite his left-sided position can be found all over the opposition half, trying to link up play and expose their opponents through his movement.

His heatmap above shows his constant movement all over the opposing half, as we as his tendency to drop back behind the central line to pick up the ball and support the build-up play.

His strong positional sense sets him apart and allows his teammates to find him in a goalscoring position no matter how they have decided to attack. His movement, combined with his creativity and dribbling result in him having a great impact in the box. Despite his attacking role he is often crucial in ball progression and contributes with his progressive runs and dribbling, which help him to break through defences. Then, he can equally successfully support his teammates’ movement through smart passing and crossing but also be a direct threat to the goal.

The 24-year-old’s ability to deliver the ball to the box is important for the team as it allows them to shoot from quality positions. His dribbling often results in him penetrating to the final third and creating goalscoring opportunities. As his “penetrating carries” map below underlines, the Portuguese constantly aims to exploit the penalty area and create havoc. 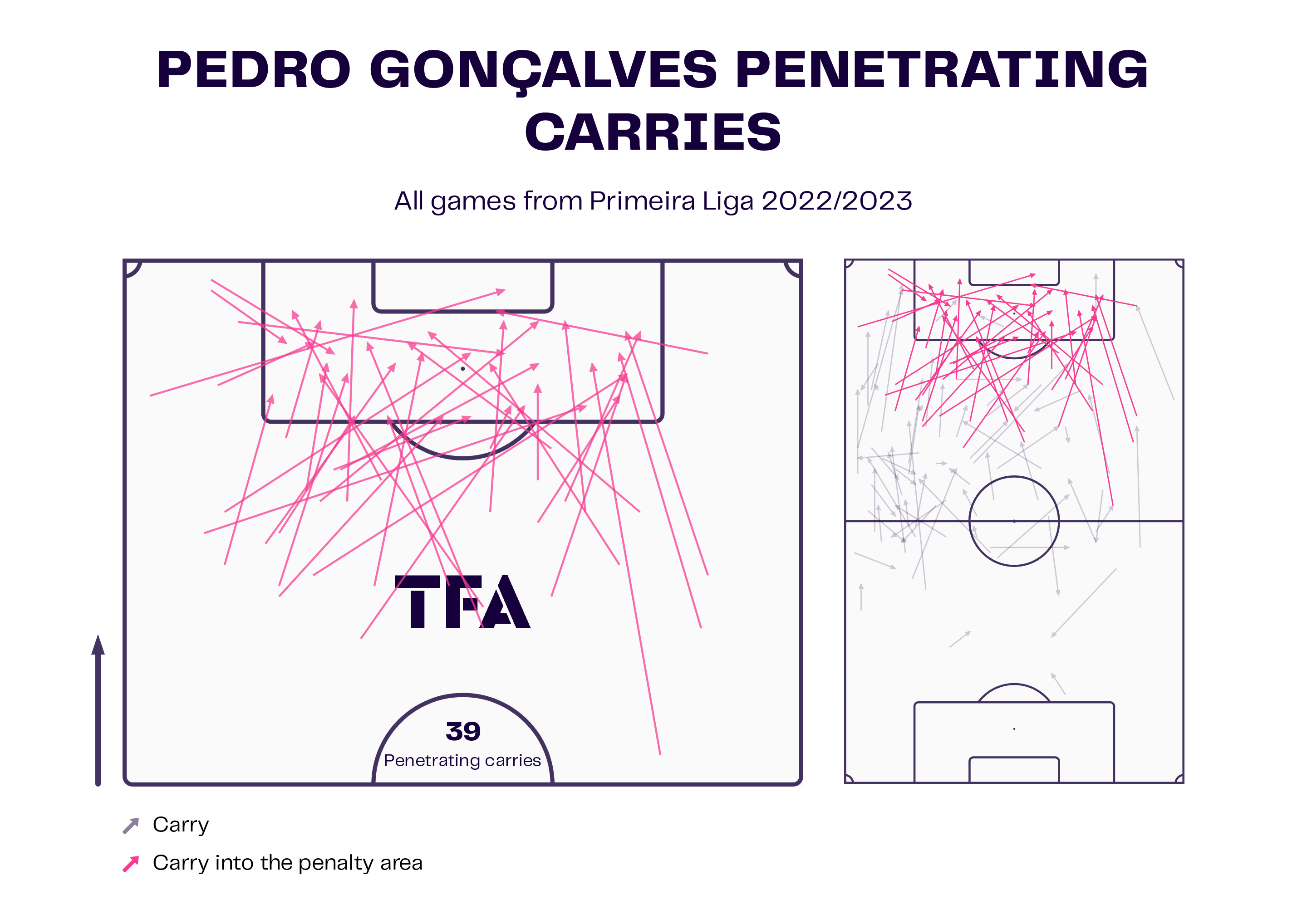 His composure and control of the ball make him a key player in the team’s build-up strategy.

He continues his predecessor Fernandes’ job of making runs to the box and threatening the goal directly. He is good at finding pockets and exploiting them increasing the team’s explosiveness in attack. Even when he plays as a winger, he moves more into the half-spaces to help the team overload the penalty area and use link-up-play to expose the goal. This strategy is successful thanks to his positional awareness and constant aim to disposition defenders and create free spaces.

He can smartly position between the opposition’s lines and use his anticipation skills to pick the right time to attack. Pote’s connection with his teammates and their constant movement around each other allow Sporting to disorganise defences and expose them properly.

As mentioned, one of Pote’s key strengths is his ability to hold onto the ball. He manages to escape pressing situations through his dribbling which helps the team in retaining possession and not lose control over the game. He often moves the ball out of dangerous areas with his progressive movement and gives the team the chance to move out of their own half.

Despite his attacking role, his contribution to the team’s ball-recovery efforts is impressive. The player contributes to Sporting’s pressing strategy and often aims to recover possession in the advanced areas. He averages 4.7 recoveries per 90, which helps the team in blocking the opposition attacks and staying in the advanced areas.

His anticipation skills and composure make him successful in his direct interventions as well and he averages a 62.7% success rate in his defensive duels, making him a good addition to the team’s first line of defence.

As our analysis shows, Pedro Gonçalves has the needed qualities to lead the team in attack and support his teammates with passing but also to directly threaten the goal. His positioning and movement off the ball give the team different options in attack and his runs to the box disposition defenders to gain an advantage for his team. This makes him key for their ambitions in the league and in Europe as well.