Casa Pia won promotion to the Primeira Liga for the first time in 83 years. After finishing runners-up, they looked to strengthen their side significantly over the summer. Manager Filipe Martins brought in 16 players in the summer window.

Having made a solid start to the campaign, and sitting in 7th in a UEFA Europa League spot, Casa Pia will be hoping to continue their form throughout the season. Star man Saviour Godwin will be looking to ignite some of his terrific form from last season.

With the ball, Casa Pia look to assert themselves in central areas. By setting up in their favoured 3-4-3 formation, similar to that of Chelsea under Thomas Tuchel, they are able to crowd the central spaces. When the ball is with the goalkeeper, the Casa Pia defence takes up a fascinating approach.

The back three formation becomes a diamond and the wide midfield players drop into fullback roles. By doing this it means that Casa Pia are essentially building up with a 4-1-2-3 formation which is easy to progress play with.

Doing this gives them an extra player in the midfield and allows the central centreback to act as a pivot. By the centre-back taking this responsibility, it means that the two more advanced midfielders can roam freely to find pockets of space to receive the ball. 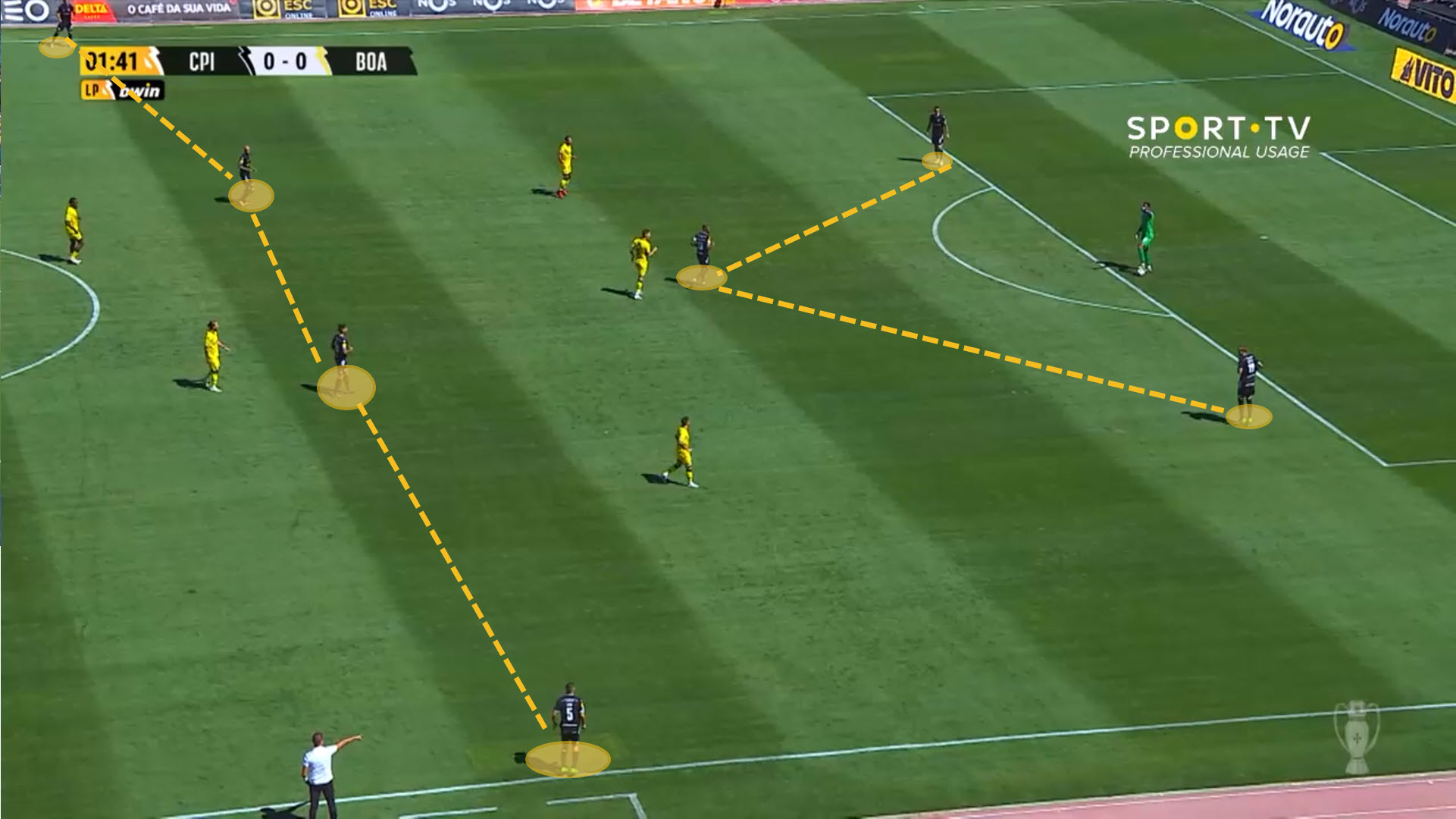 The player who takes up this ‘6’ like role needs to be comfortable receiving the ball in challenging and high-pressure situations. Centre-back Vasco Fernandes is the player who steps up the pitch to create this set-up.

The method of build-up is slow and progressive from Casa Pia. They are comfortable in passing the ball through the thirds and look to progress constantly. Even though they have averaged the third lowest possession this season with 43.8%, by no means are Casa Pia a slouch on the ball.

This ability on the ball is emphasised by captain and centre-back Vasco Fernandes. His pass map for the season so far is below. The high density of passes towards the halfway line shows how comfortable and progressive he is. His passing map highlights how Casa Pia look to set up. 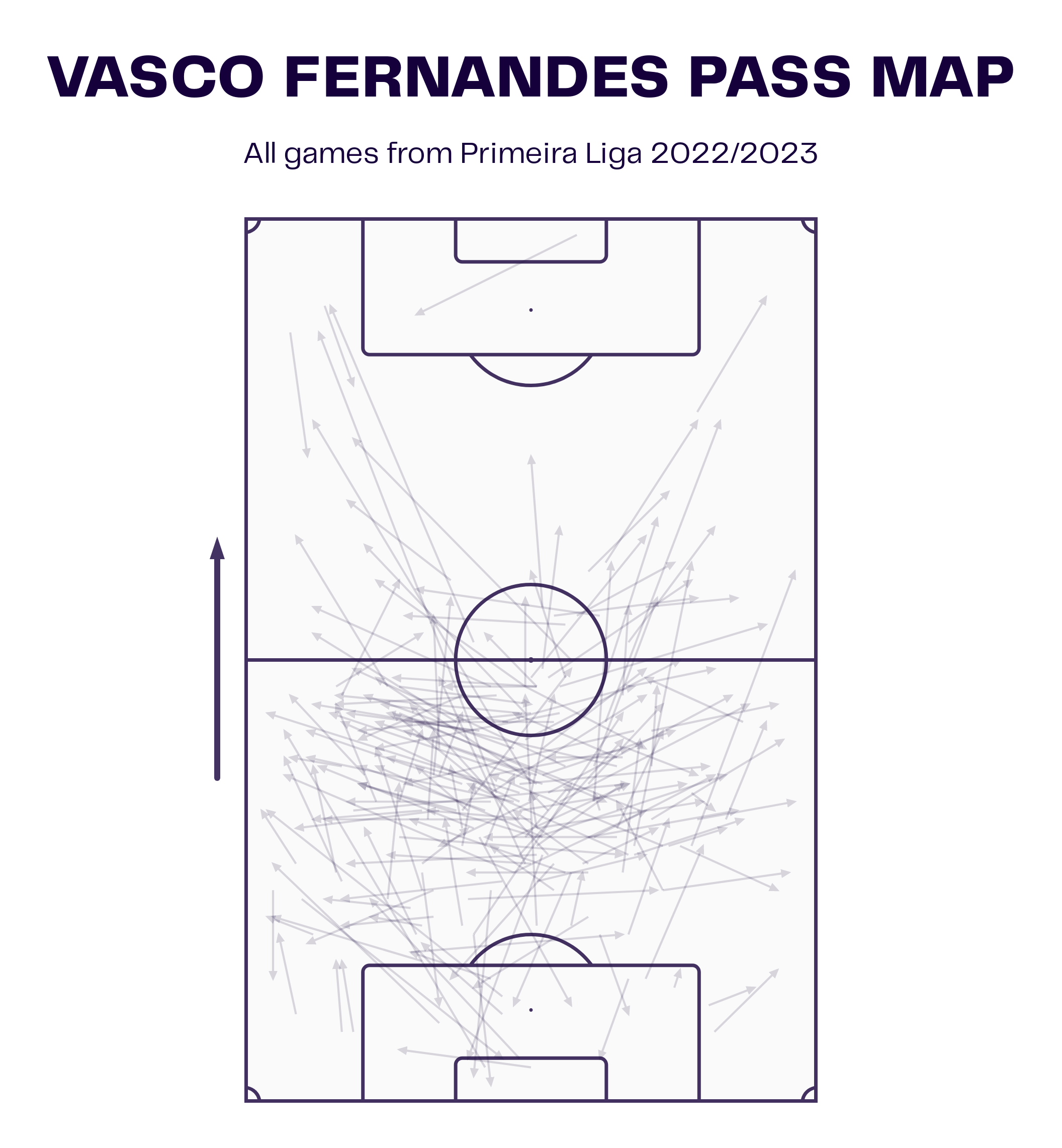 Fernades is great at playing long balls forwards, especially into the left attacking channel. He is good with both feet and is a very experienced player at the age of thirty-five. He has started all games so far and is instrumental in the style of play that Filipe Martins wants to deploy.

Furthermore, as the team look to build from the back they utilise quick combinations and movements in the wide area. By doing this they look to exploit the opposition by creating space in the wide parts of the pitch. Quick movements and changes of direction with teammates along with a well-timed pass make this possible.

One notable combination is where the more advanced wide player comes narrow and drops deep for the ball into his feet. This is usually when the centre-back has comfortable possession of the ball. 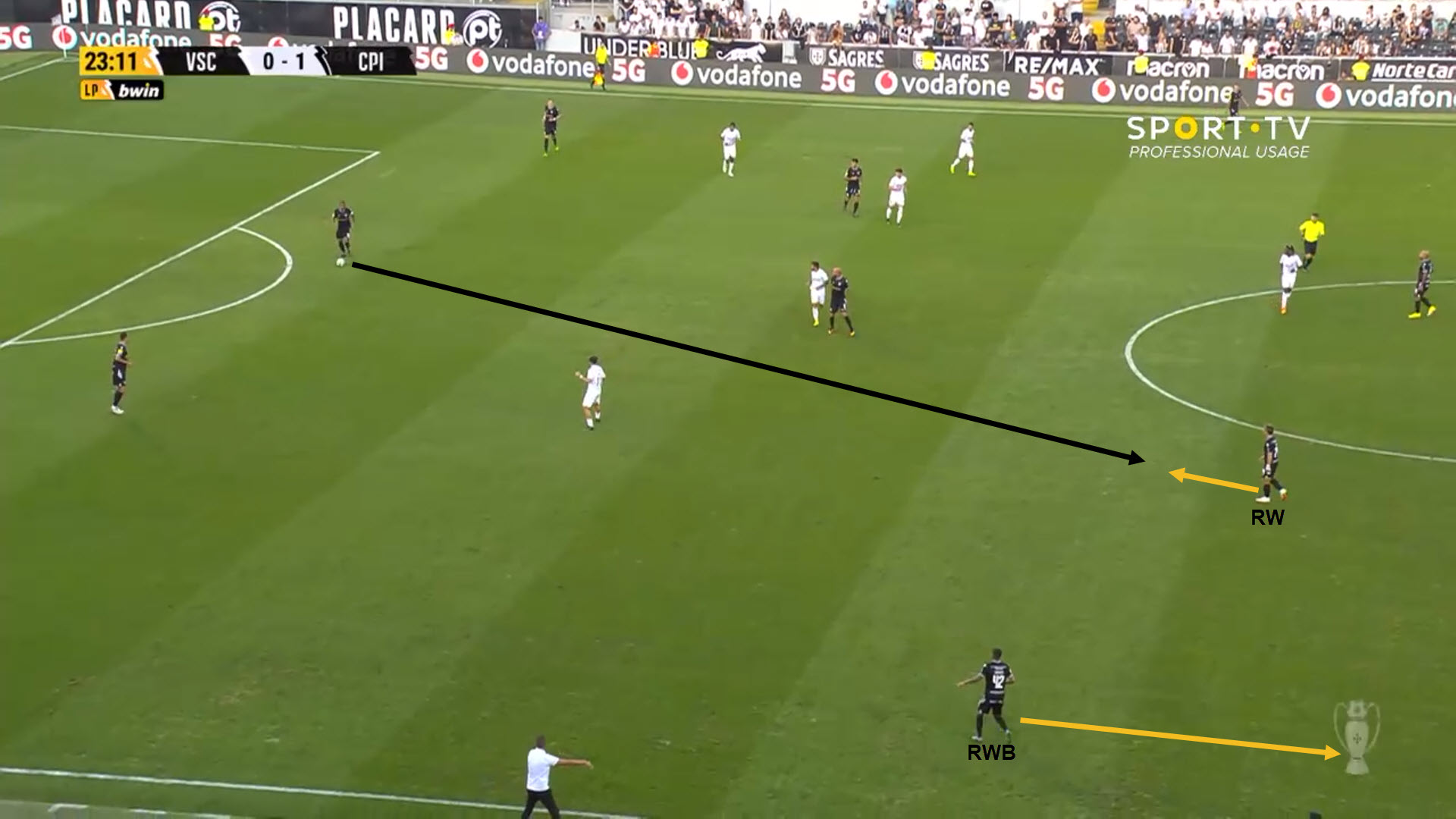 By doing this, it allows for the ‘wing-back’ to advance into the space out wide. This situation creates a dangerous attacking opportunity as the advanced wide player can carry the ball at pace with an overlap from his teammate. Casa Pia are great at timing their movement to create patterns of play which have clearly been worked on.

The positional play in wide areas is something worth noting, especially when it comes to attacking at the top end of the pitch. As highlighted above, the wide players are prone to playing narrow allowing the ‘wing-backs’ to advance into the space.

By doing this, Casa Pia are able to load the box with all of their main attacking threat with ease. This leads to them creating chances from wide areas as they have a lot of options centrally. 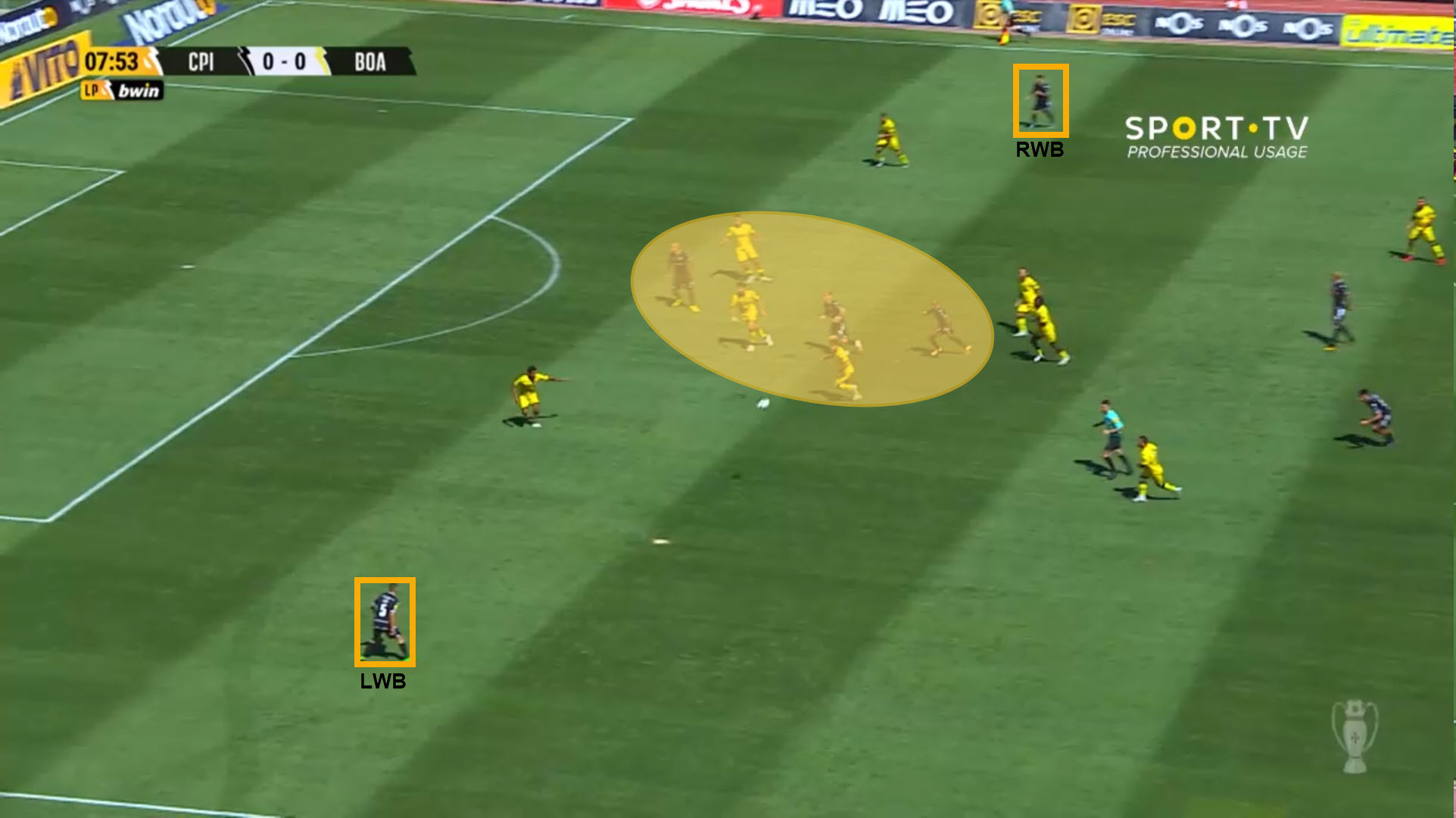 Not only does this set-up allow for them to capitalise from balls into the box, but also combinations centrally. Midfield players support the attacks and can play short intricate passes with the attacking players, who are all in close proximity.

The importance of this attacking set-up is that the width is held. The wing-backs are very comfortable in playing this advanced role and they know their position well. The wide players have faired well in their attacking output and delivery, raking up the fourth highest successful crosses percentage with a score of 35.7%

Not only is it the fullbacks who provide attacking output, but starman Saviour Godwin. The attacker finished last season as the club’s second top scorer with 10 goals. The Nigerian is very direct in his play and has already been causing opposition defenders issues this season. 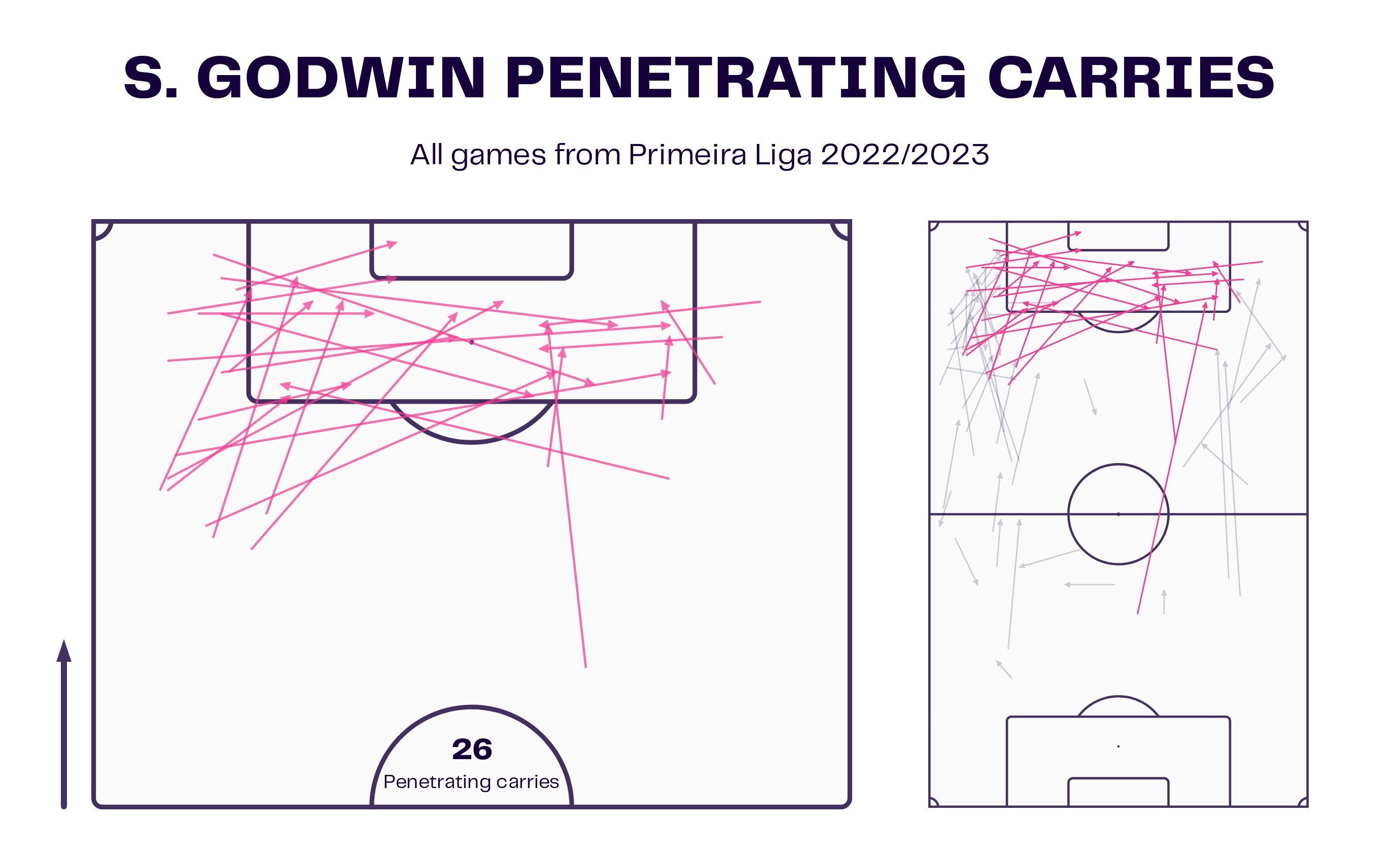 His penetrating carries are visualised above and he loves to attack the pitch from a more central area compared to an out-and-out wide player. His first thought is to be as direct as possible and to drive the ball into the centre of the pitch. Godwin brings his team forwards and is great at holding possession.

He is key to their attacking success and Casa Pia fans will be hopeful he can continue his positive start to the season. Not only is he a great individual player but he also works hard for the team making him even more vital.

Once the attacking players manage to create an opportunity they are very well placed for it to be a good one. Their positioning in the box is very hopeful as they commit a lot of bodies. Below is an example of how the attackers are drilled into where to make movements. One player makes a darting run toward the front post, one peels off at the back and the final player holds his run and anticipates the space on the edge of the box. 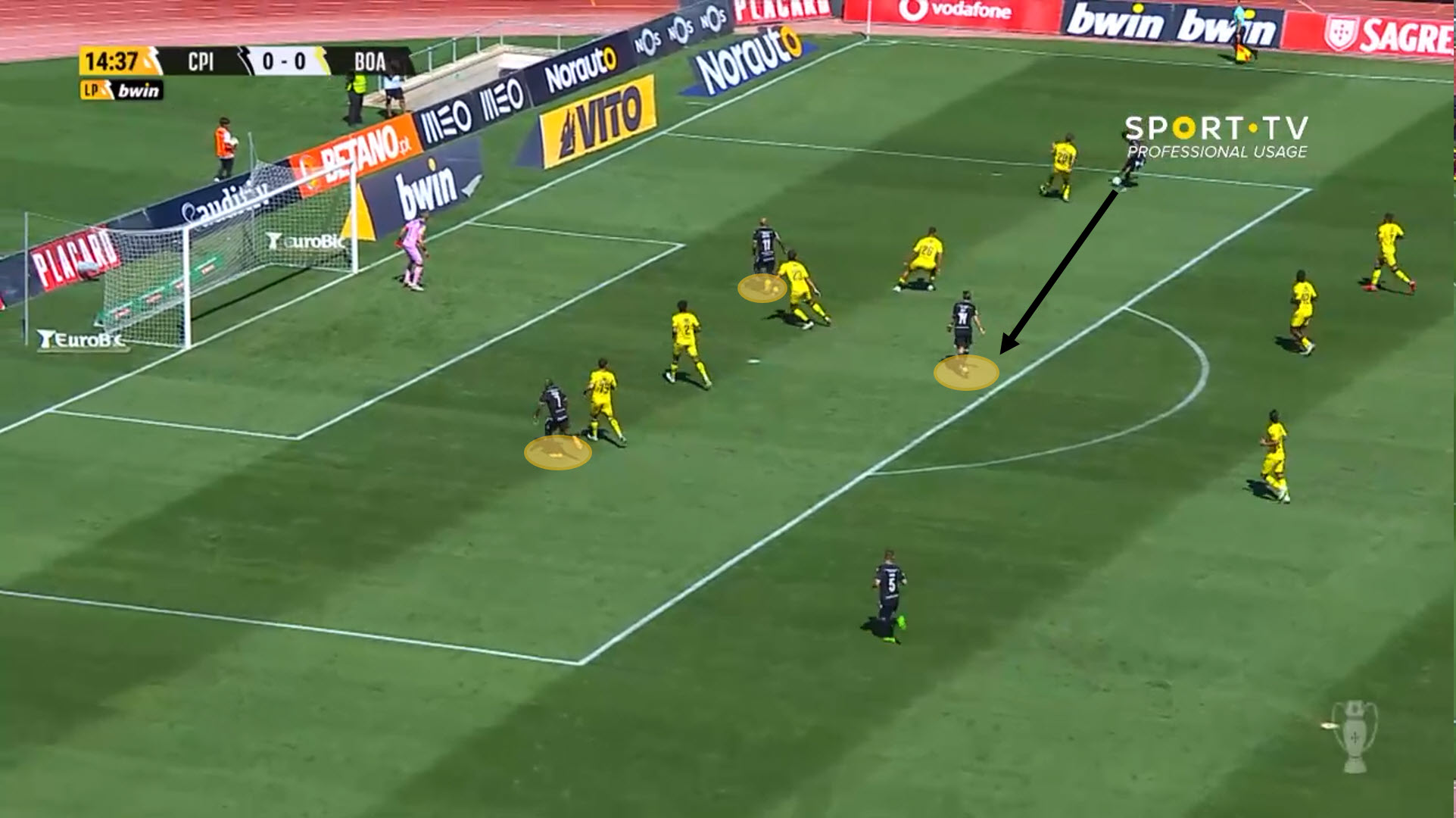 Not only do Casa Pia have three guaranteed attackers in the box, their midfielders often arrive late to pick up any loose balls around the edge of the box. By doing this it gives extra attacking support but also provides a defensive safety net around the top of the box.

Without the ball, Casa Pia are very disciplined and strong. They boast the joint best defensive record this season concerning just 3 goals so far. This impressive stat is through pure hard work without the ball.

To engage with the opposition high up the pitch, Casa Pia look to set themselves up in a 5-2-3 when engaging the opposition defence. By doing this they push their attacking players high and want them to make it difficult for the opposition to build up. Their aggressive midfield backs this up and screens the opposition attackers. 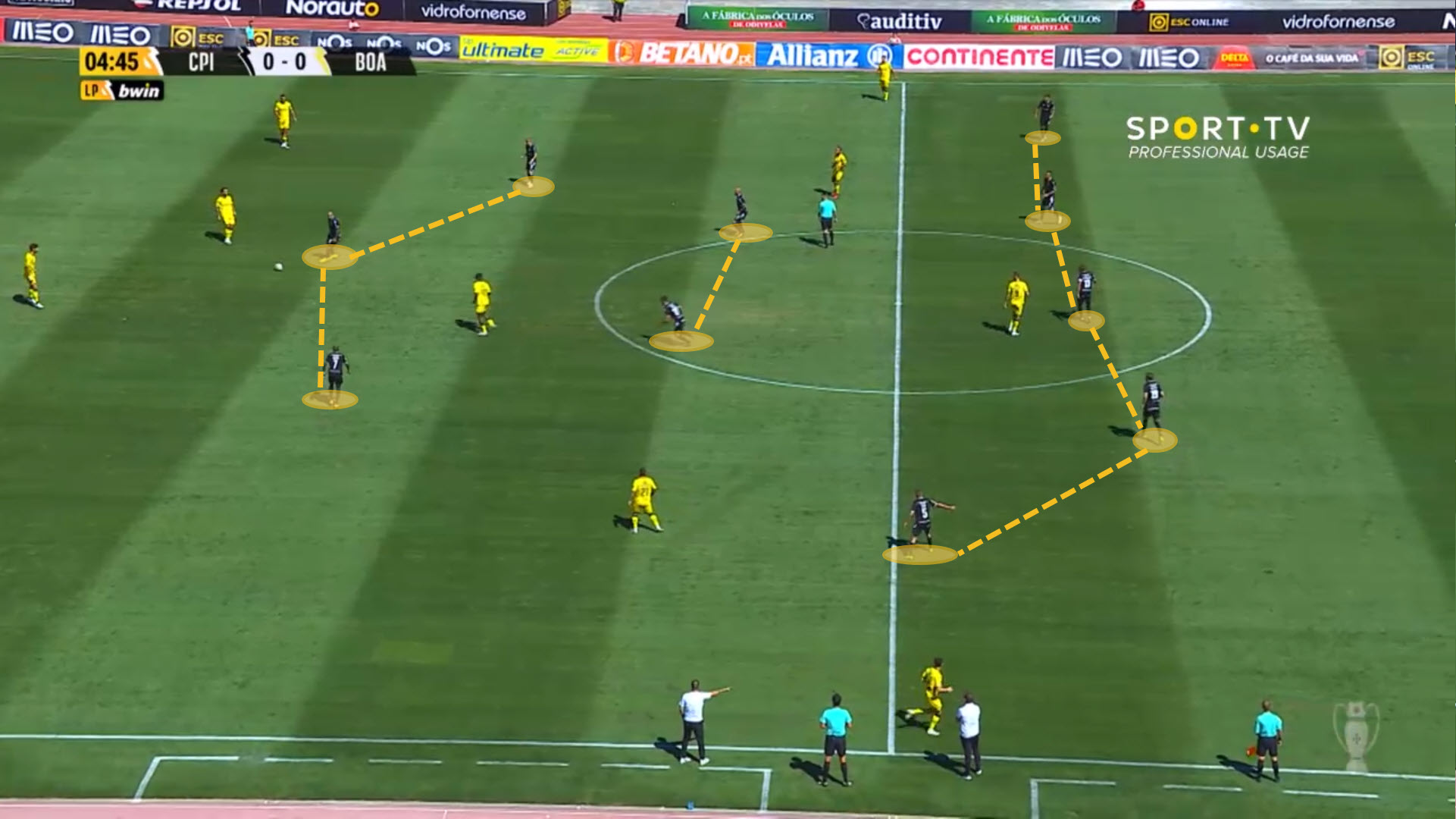 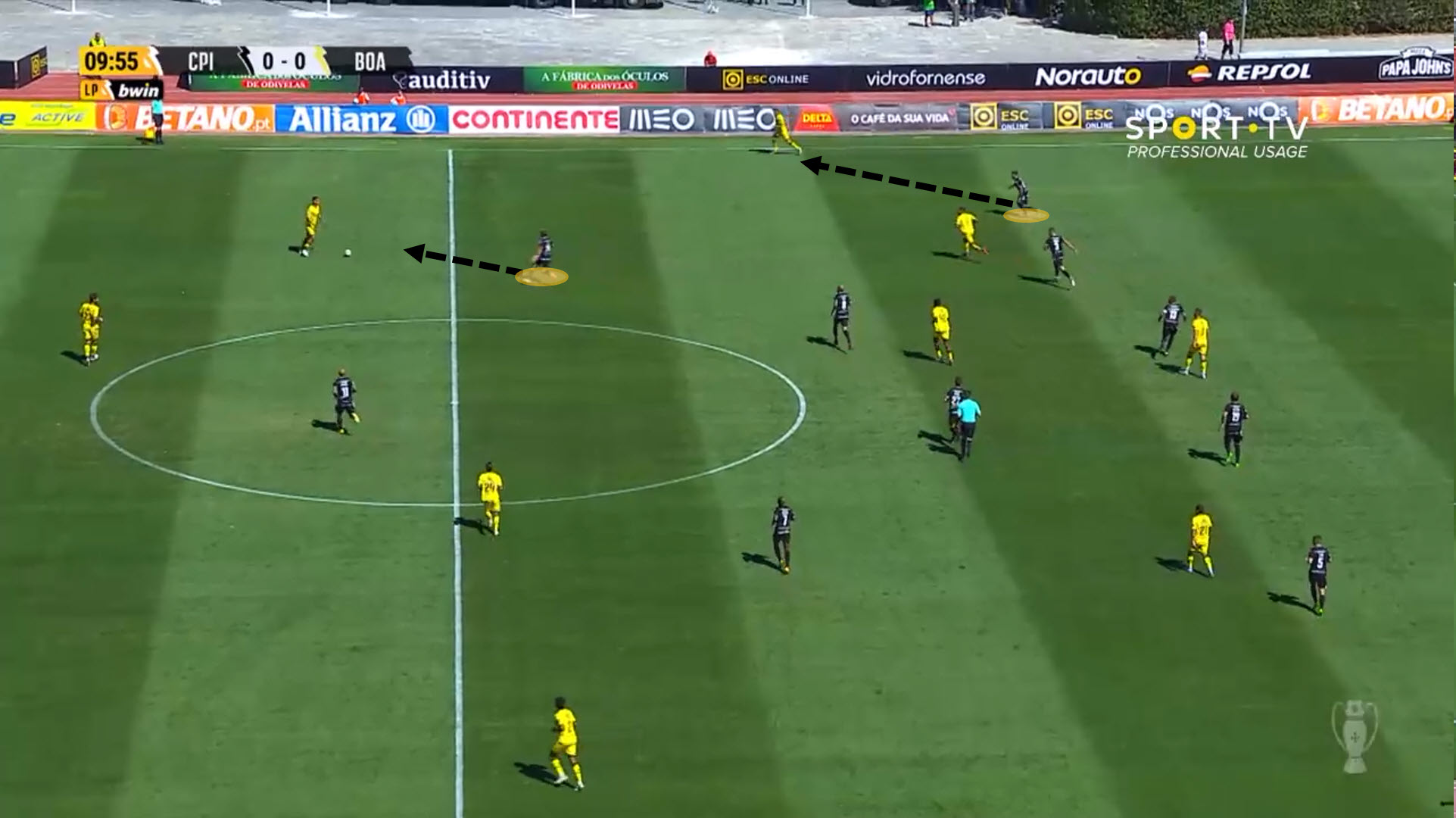 The players engaging in this form of pressing are not overly aggressive and do not commit themselves. By pressing conservatively they are able to direct the opposition play by also maintaining their rigid defensive shape. This style of defensive set-up enables Casa Pia to maintain high levels of concentration over a sustained period of time.

When sitting deeper, They drop into a 5-4-1 and look to engage in the midfield area of the pitch. Their defensive compactness across the middle of the pitch provides a flat bank of four which covers the width of the field.

Below is a graphic showing the rankings of all teams competing in Liga Portugal and how they place for interceptions per 90 and PPDA. 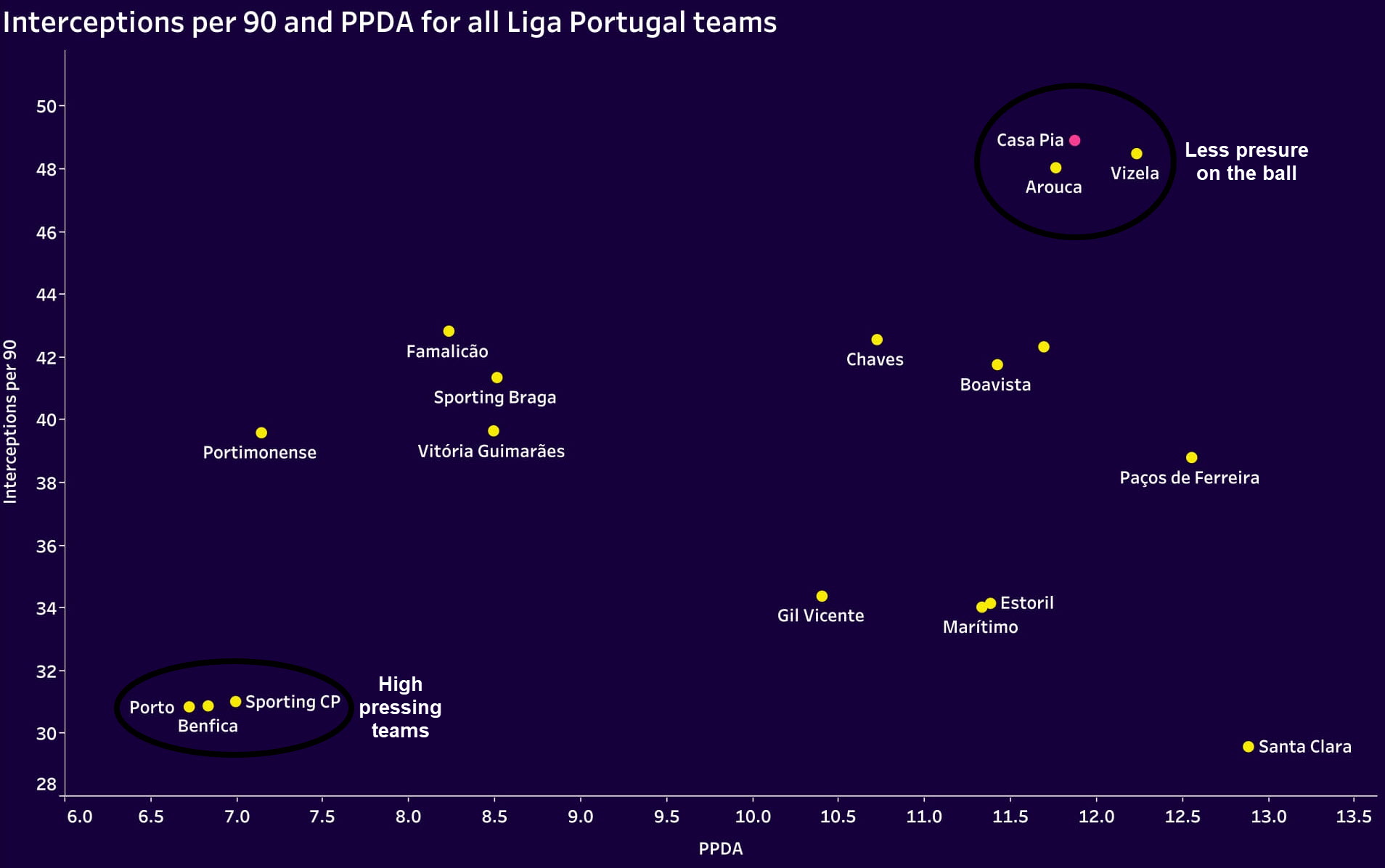 This visual gives us a good insight into a team’s style of play. The teams in the bottom left have a low number of interceptions but a high PPDA. This tells us that they have a large amount of possession, leading to fewer interceptions made as they are not regularly defending. The low PPDA teams show that they are quick to engage in play and do not like the opposition sustaining possession.

At the opposite end of the graph, there are three sides that rank highly for both metrics. This shows the opposite style of play where they look to sit deep and defend their own half. Their style of play is to be comfortable without the ball, hence the high number of interceptions and the high PPDA explains that their level of engagement is not that of a pressing team.

Casa Pia rank amongst those in the high interceptions and PPDA showing that they are comfortable in how they set up without the ball.

Overall, Casa Pia are an interesting side as they have a very unique style of doing things. Their manager Felipe Martins has coached his side into a well-organised and assertive team. Each player understands their roles and this bodes well for their first season back in top-flight football.

Casa Pia are a team to look out for having collected some impressive results already this season.