The conversion rate of Erling Haaland (22) is impressive. The Norwegian also scores at will with his new employer Manchester City. In six Premier League matches, the 1.95-metre tall giant netted no fewer than ten times.

Paris Brunner is still a long way from the successes of Haaland. It certainly wouldn’t be fair to compare the 16-year-old to one of the biggest in his profession. But, his conversion rate in the U17 Bundesliga is definitely impressive. The centre-forward, who plays for BVB’s U17s, has scored a sensational 14 goals in the 4 matches this season so far. He also plays for the club’s U19 in the youth league.

On the first match day, Paris Brunner really got going 7-0 against SV Deutz 05 and scored 3 goals. A week later he scored all of Dortmund’s goals in a 5-1 win over VfL Bochum. The same thing happened in the following two rounds. He single-handedly defeated MSV Duisburg 3-0. On match day four, he scored a hattrick that gave his team a 3-0 lead at half-time against 1. FC Köln.

Due to the loss of points, Borussia Dortmund‘s U17s lost the lead in the table to arch-rivals Schalke 04 of all sides but that shouldn’t detract from Brunner’s performance. The 6-time U16 German national player would like to continue with what he does best: scoring goals.

This tactical analysis provides an in-depth scout report on Borussia Dortmund’s Paris Brunner, examining the 16-year-old’s playing style and characteristics. In addition to understanding how and where Brunner plays, this analysis will also identify the style of tactics where he is most likely to thrive. Is he the next player to make his debut under Edin Terzic?

Paris Brunner combines physicality with technique. He is considerably both footed and confident. Brunner can function as a target man who drops deep in the build-up to hold up the ball while the wingers can provide passing options for him. He also has all attributes to become a complete forward who gets in behind the opposition’s defensive line thanks to his acceleration. However, as a modern forward, he also likes to drift out wide, take on defenders and create chances for himself or his teammates.

As you can see in his heatmap below, Brunner is very active on the pitch. While most of his actions are arguably in the opponent’s box, he also positions himself in the half-spaces. His preferred side to drift out wide to on the pitch is the left one. 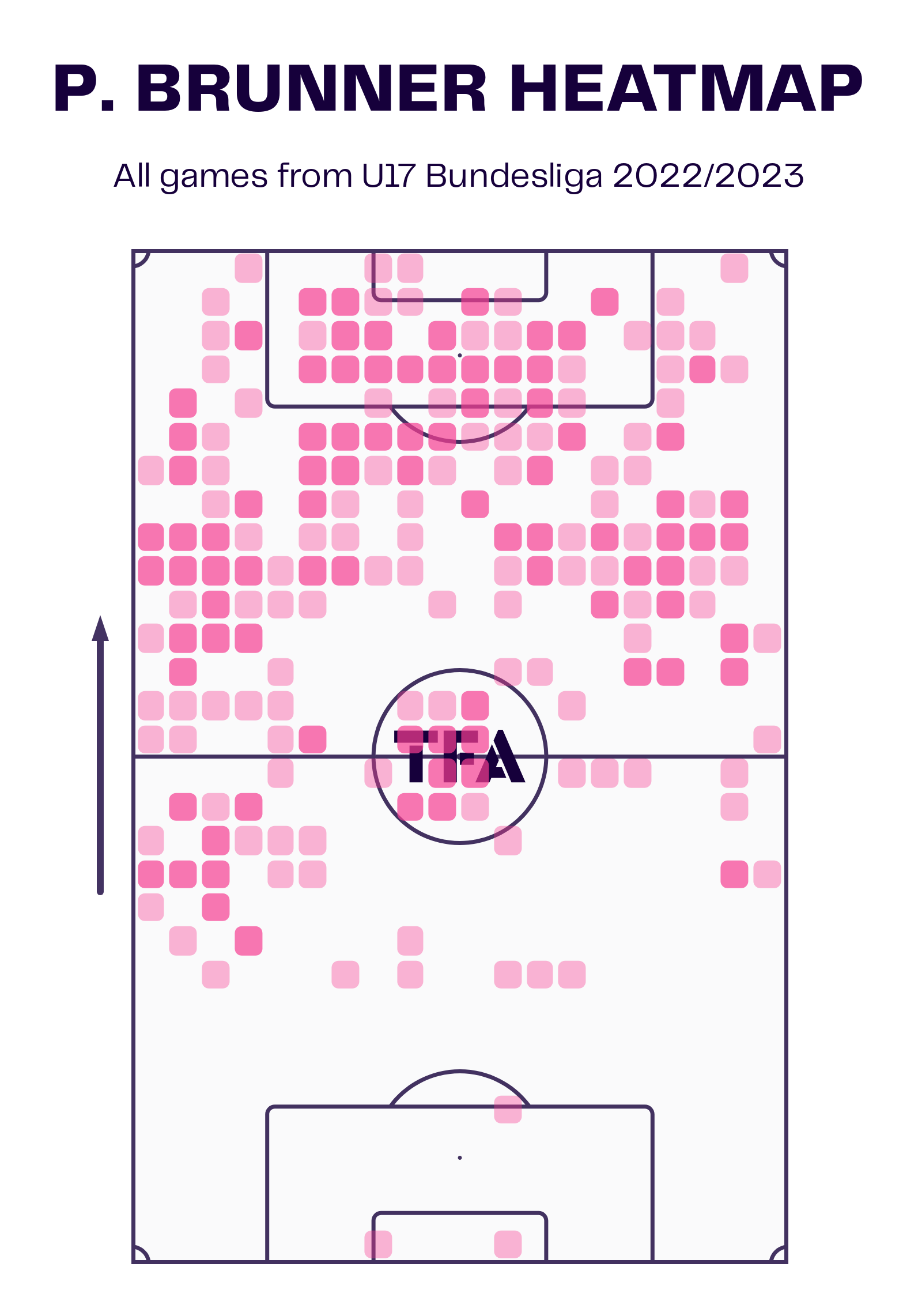 In the build-up play, Brunner has the task to drop deep in order to receive the ball and open space for Dortmund’s wingers. Thanks to his physicality, he is very good at holding up the ball which leads to time and space for his side. Brunner then often plays a ball to a central midfielder to get the attack started. 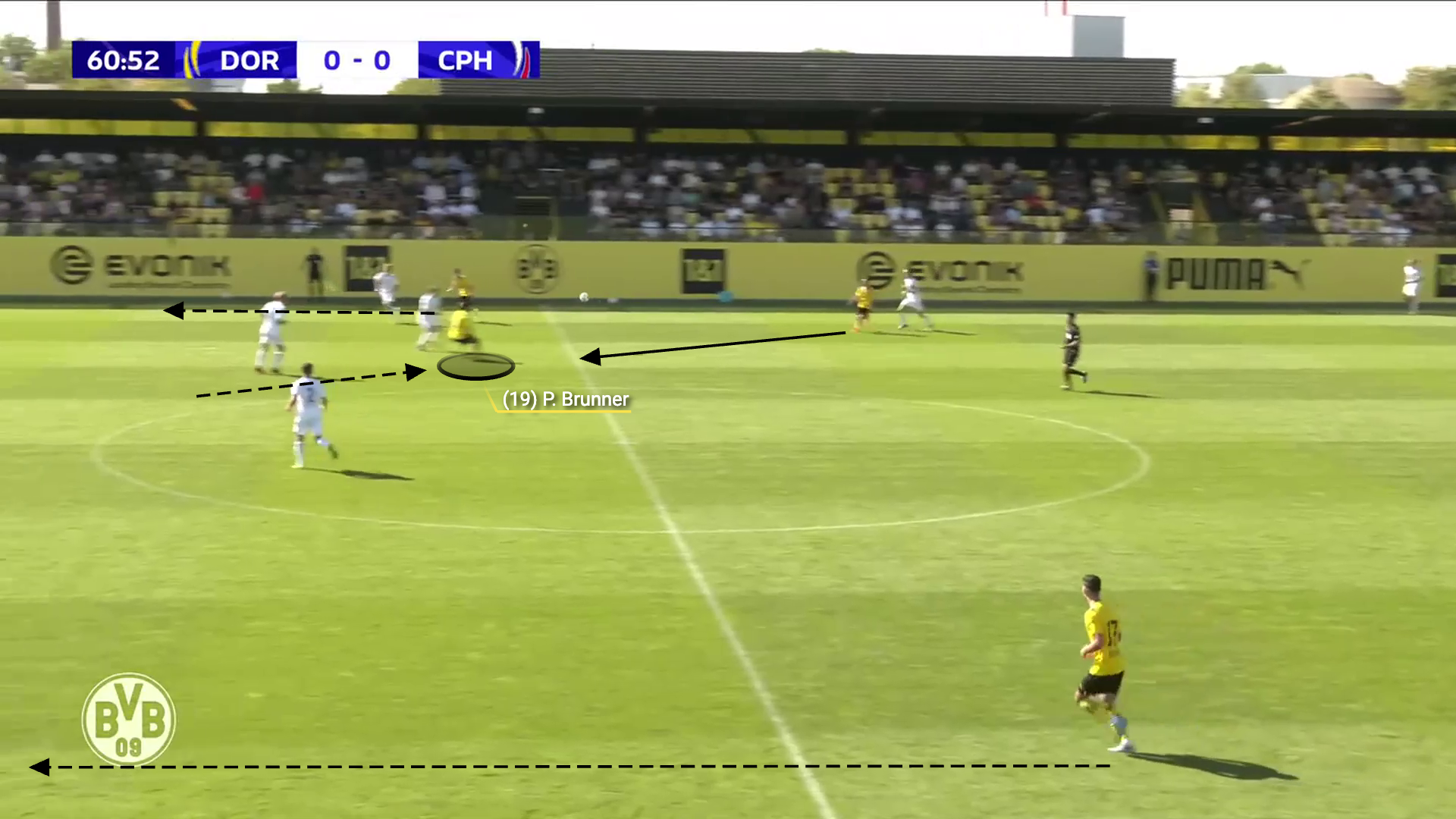 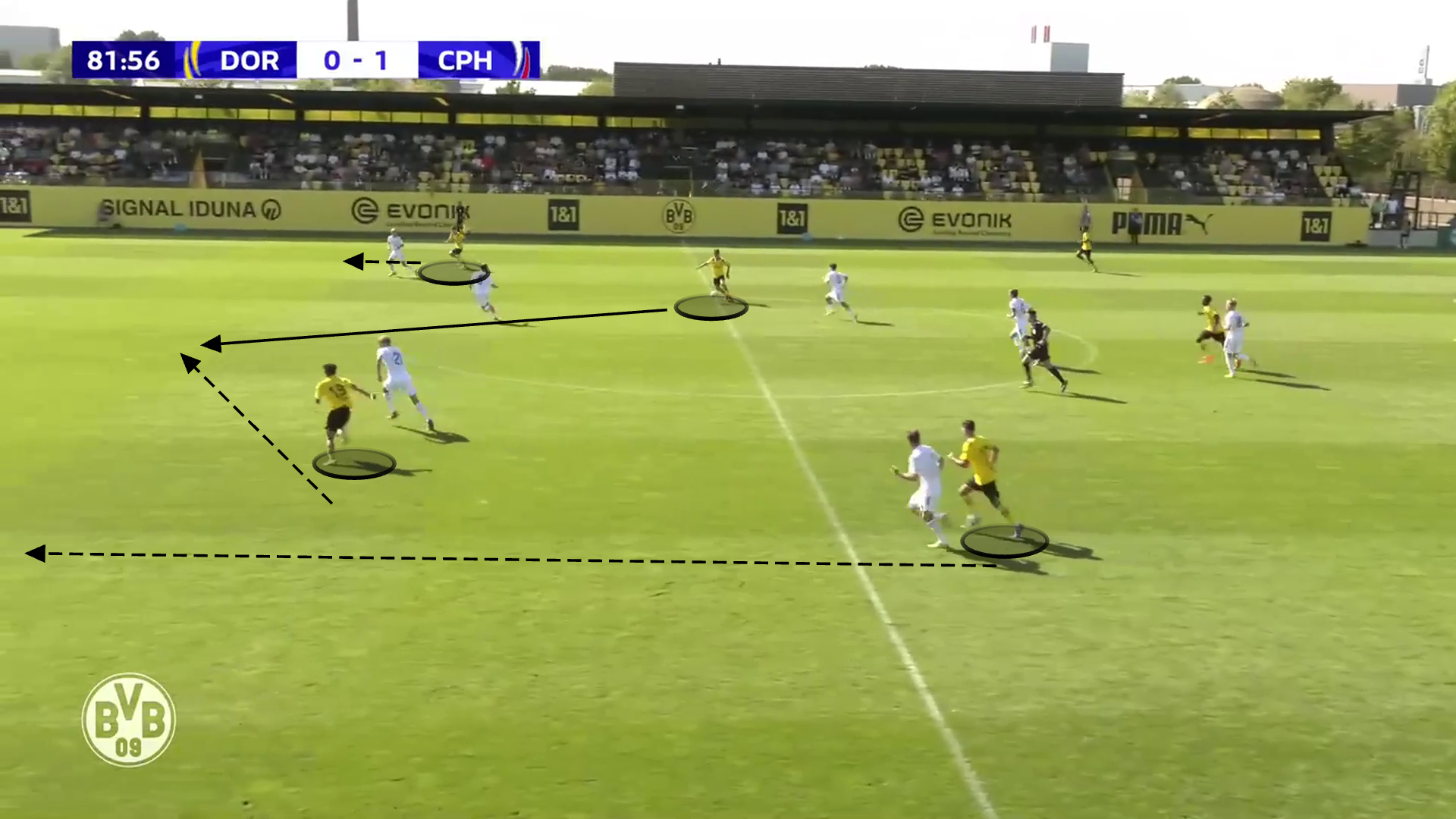 Alternatively, he can start his well-timed run in a central area to receive the ball in the half-spaces. 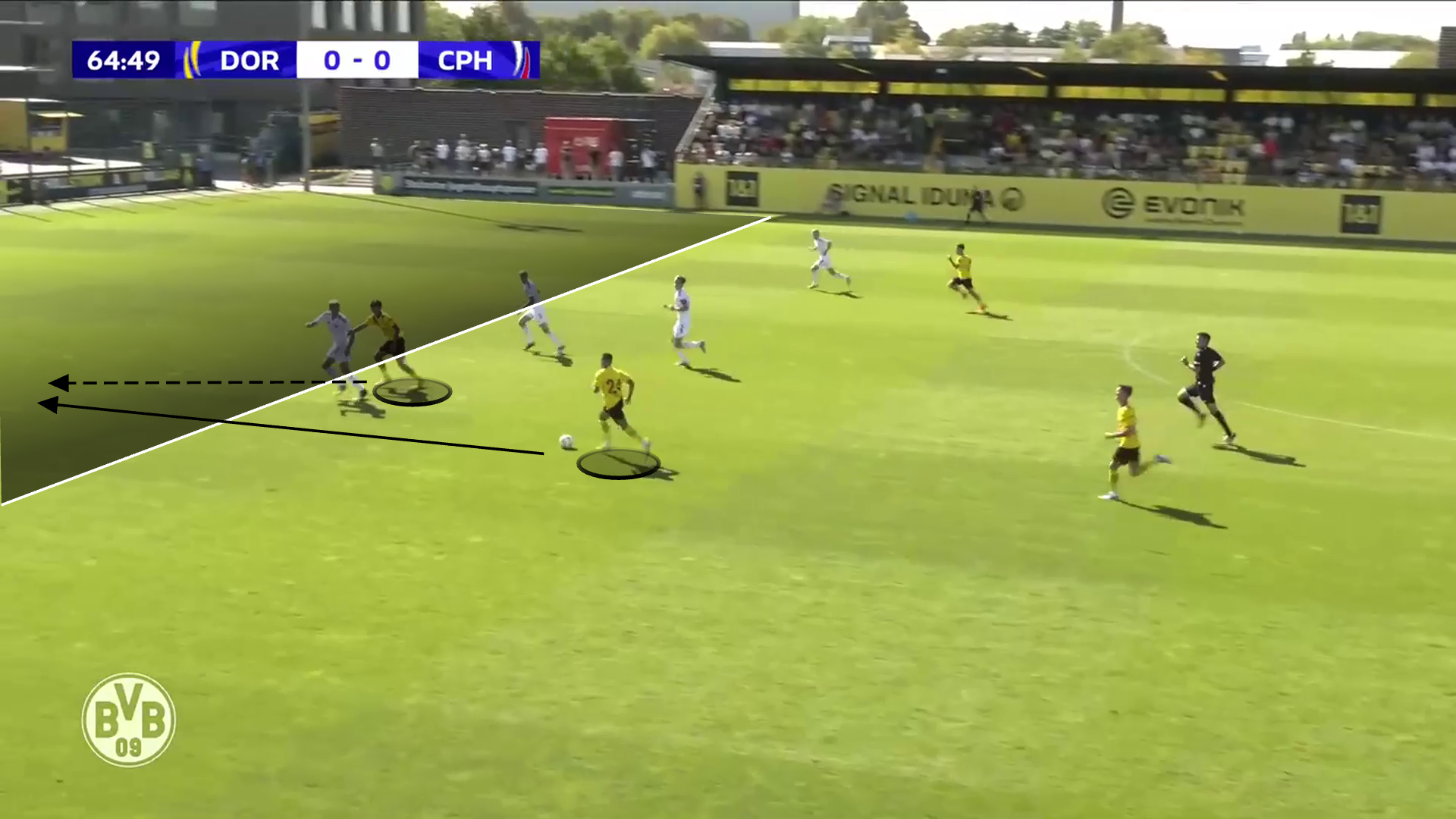 Especially when drifting out wide he looks surprisingly clean and agile in his dribbling for a player of his size (185 cm). He likes to beat his opponent with maybe one or the other skill too much but has found a good balance for these cases already. His acceleration is great as well so he can use it and does not need extraordinary technique at all but, he also does provide the technical ability.

As you can see in the image below, he drifts out wide to receive the ball and go dribble into the middle. Because he is a goal threat, he attracts multiple opponents. Thanks to his technical ability, paired with his acceleration and pace, he can dribble past four opponents and then is in a more advanced and central area. 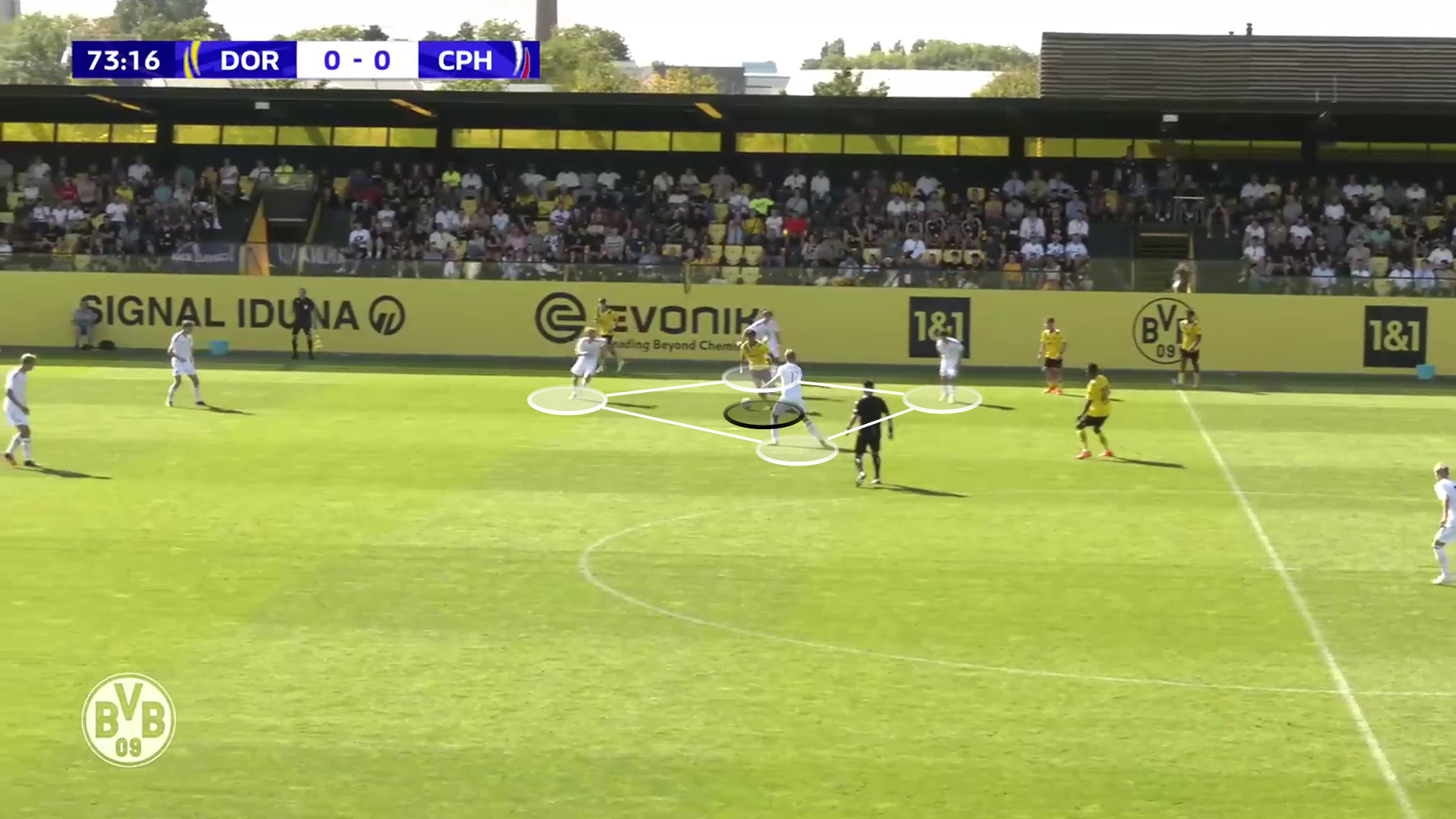 But in the end, he’s still a forward and is unsurprisingly great at it. Brunner scores a lot. He can create chances for himself or initiate attacks via his dribbling, positioning and hold-up as mentioned. But in the end, he is astonishingly clinical in the final third.

His shot map below shows, that he prefers to shoot inside the box. Inside the box, it doesn’t matter if he shoots from the right or left side and there is no favourite side for Brunner to place the ball at. He scored four shots each by shooting into the left corner and centre of the goal. Additionally, he scored five goals by shooting into the right corner. His goal conversion of 56% is outstanding. This means that more than half of his shots are successful. 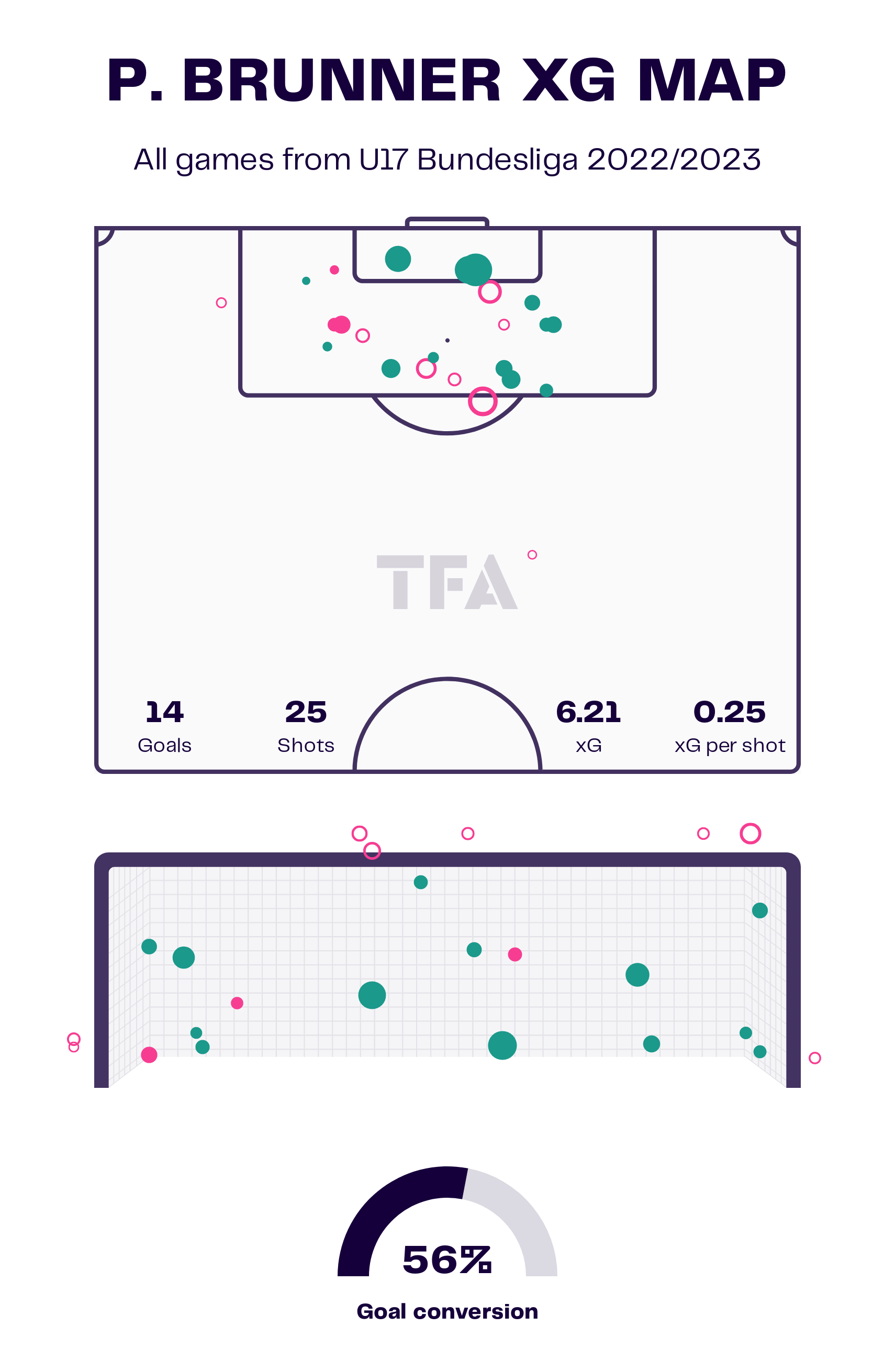 His movement within the box allows him to score a ton of goals with not more than one or two touches, convert low-crosses, or score from deflections. When being sent in behind, he can muscle his opponent, be faster than him and score with either foot. Additionally, he even wins tons of headers by now. If one of his teammates is in a position to cross, Brunner often positions himself on the back post. 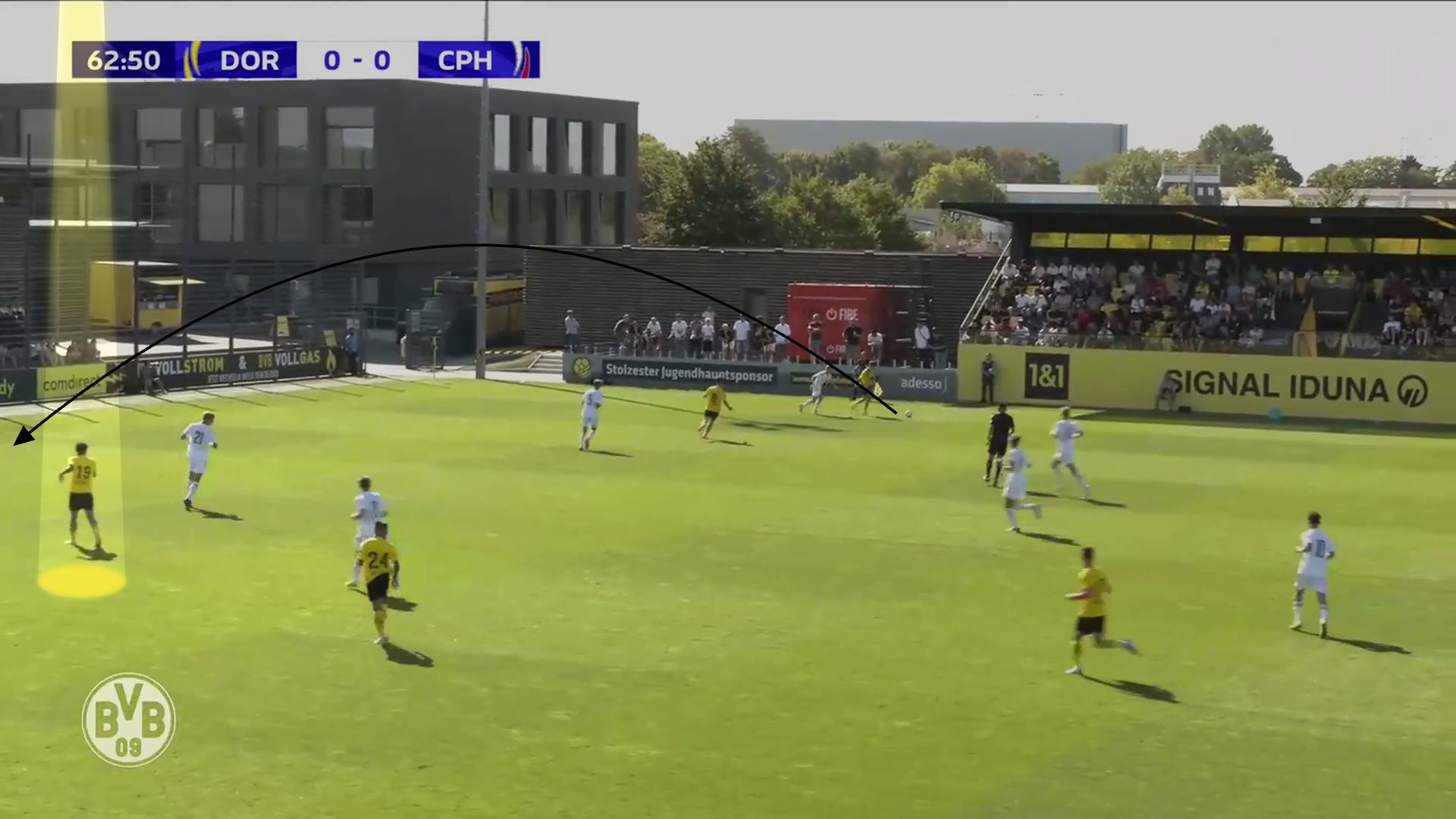 So one big strength of Brunner is that he can create chances by himself. Elite strikers need to be able to create a goal opportunity out of nowhere. Being a high-volume shooter is also important. Obviously, with some balance, Brunner is capable of beating defenders, even in tight spaces, in 1vs1 duels, or even against multiple defenders, thanks to his brilliant technique. He combines high flair, agility, acceleration and physique.

Adding to that, he is also capable of assisting his teammates. Even if he did not provide an assist yet this season, he plays lots of smart passes in the attack. As you can see in his passing map below, he either plays the ball back in a deeper position due to his hold-up play or plays forward passes in more advanced areas. 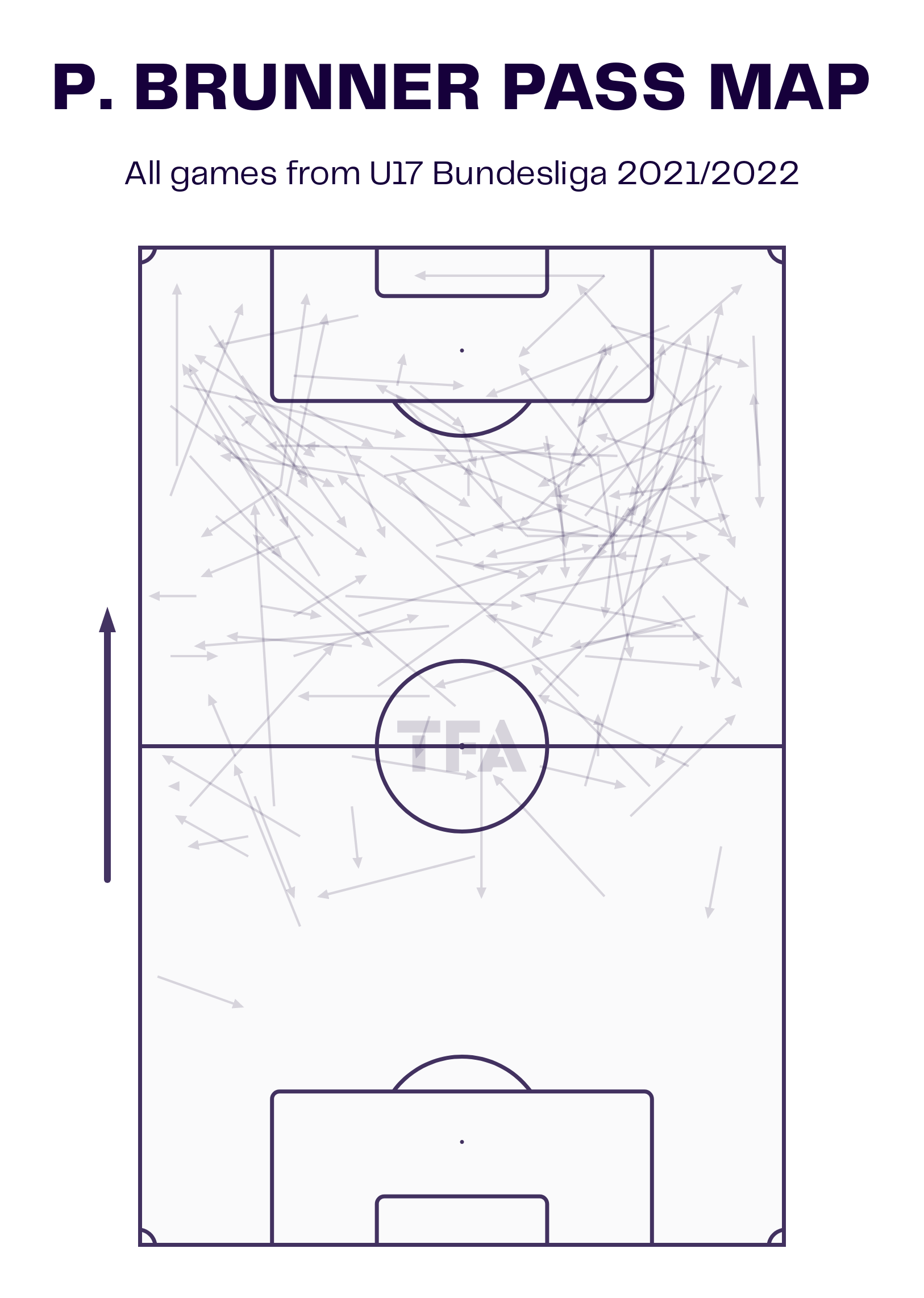 He also does that from wide areas. As mentioned earlier, he often drifts out wide to receive the ball. Then, he likes to drift inside or play a pass to an overlapping or underlapping teammate like in the image below. 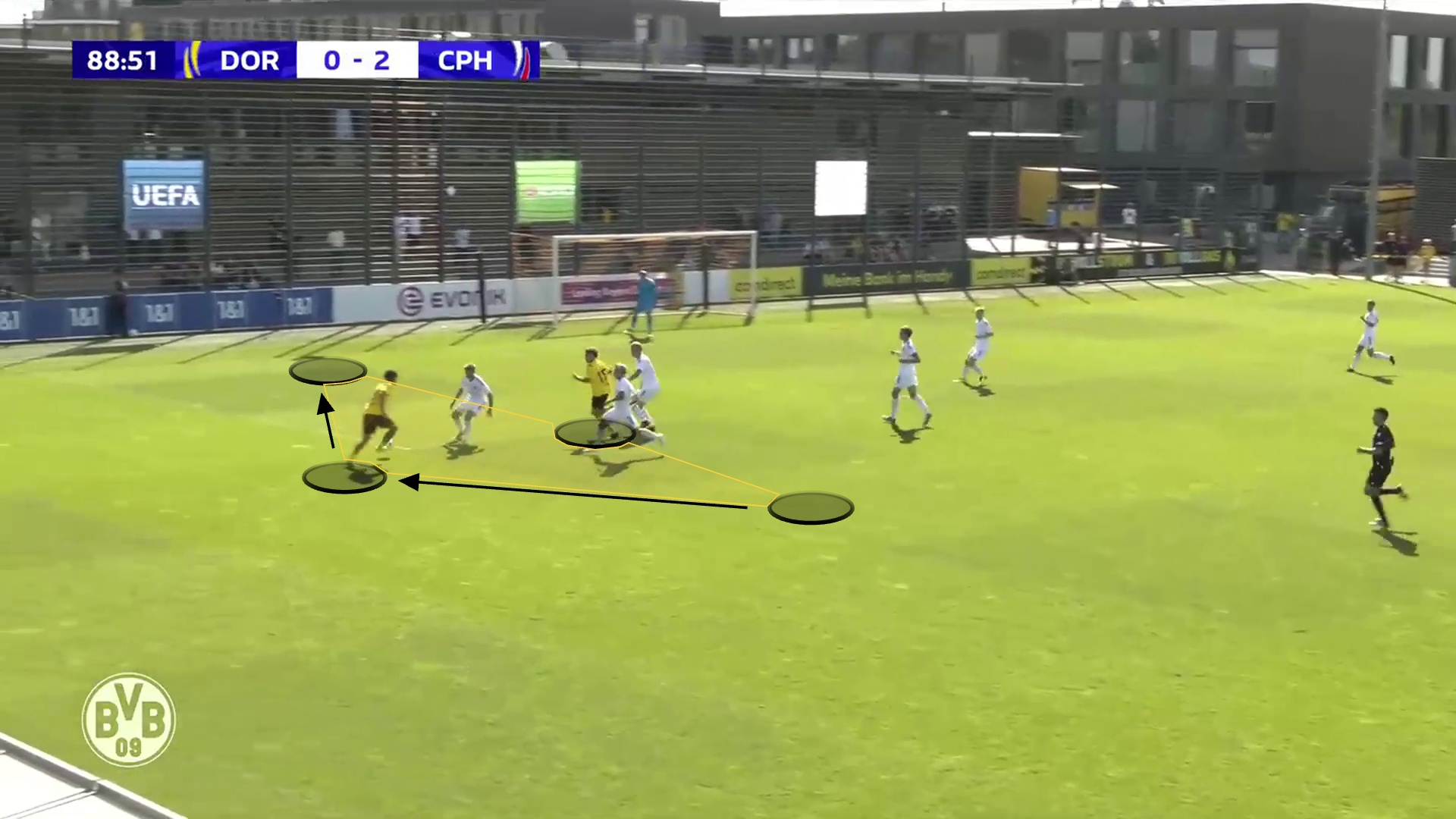 Off the pitch, he really seems to be not that serious yet (which is fine, as he’s 16) but has gotten a lot more mature over the past season. He even functions as a vocal leader on the pitch in the past few matches and seems a bit more serious in his appearance. All in all, he has really high potential.

He’s a complete package and has got everything in order to play for Borussia Dortmund’s first team one day. He is probably not that eye-catching like Youssoufa Moukoko, but Brunner is quite complete and has a sustainable profile.

However, there are also some limits to his game. He is not that on the highest level in his passing/playmaking, aerial duels or work off the ball yet. Even if he is on a good level in these areas, he needs to improve. His off-the-ball movement is really good, but not absolutely mind-blowing.