María Pilar León is Barcelona Femení’s centre-back who has been more than useful for both Barcelona and the Spanish national team. She started her career at Zaragoza and played her first-ever Primera División match when she was 16. Then, she had a brief spell at Espanyol from 2013 to 2014 before moving to Atlético Madrid where she played 84 games and scored four goals. In 2017, León joined Barcelona and from that moment onwards, her contribution at the club was exceptional not only in terms of defending but also when it comes to assists, playmaking and goalscoring.

In this tactical analysis scout report, we will explore León’s main characteristics as a defender, her roles on the pitch while carrying out an analysis of her tactical role at Barcelona and Spain, by relying on statistics and episodes from previous matches.

Mapi León plays essentially as a left centre-back in Barcelona’s 4-3-3 as well as in Spain’s 3-5-2. The latter is a formation used in certain matches by Spain’s head coach Jorge Vilda in which León is employed as a left centre-back, often alongside former Paris Saint-Germain’s Irene Paredes and Andrea Pereira. Therefore, León finds no issues in playing with a back-four or a back-three defensive line. She acts like a leader not only of defence but also of the whole team since she knows when and how to impose her personality and guide her teammates especially in set-pieces. Most importantly, León is crucial in terms of defensive decision-making. In other words, she knows how and when to resort to tackles, when to intercept passes and when to commit fouls. Having a player with such characteristics is extremely important in today’s football as defenders with such concentration, bravery, intelligence and sense of captaincy are becoming rarer and rarer.

What makes León even more precious for her team is her passing and shooting accuracy. Having excellent vision and helping midfielders in playmaking represents a big asset for the team as she not only supports her teammates by providing simple passes but she also provides some key passes especially by using long passes. And as you can notice in this picture, León’s movements are not only restricted to her team’s own half. She often advances to help in playmaking and even in goalscoring at times. Such movements however are usually calculated and planned in order to not leave a gap in the team’s defence in case of counter-attacks.

What is even more striking in this picture is that the red points show us that León covers the whole left side of the pitch from defence to attack. It is rare to find a player, especially for defenders, with as many red points as the ones León has in defence, midfield and attack. 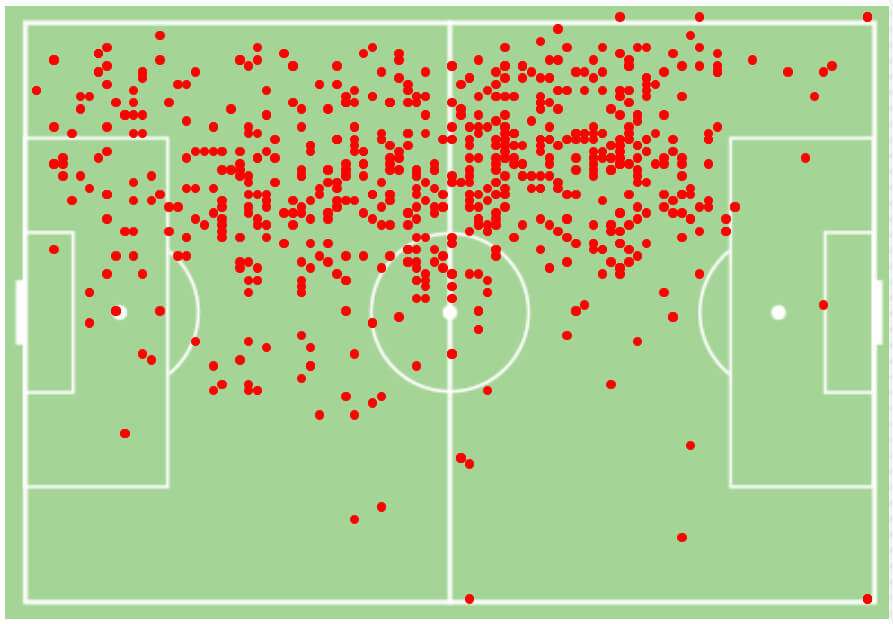 León is definitely one of the best defenders in women’s football at the moment especially in terms of interceptions, tackling and defensive duels. She has some impressive statistics in this regard with 73,1% defensive duels won, 67,9% aerial duels won, 52,1% successful sliding tackles per match with an average of 4,45 interceptions per match. Such numbers highlight León’s defensive strength and efficiency both at Barcelona and Spain. Added to that, her playing style and charisma on the pitch are unique and remind football fans of some prolific/legendary defenders such as Paolo Maldini, Alessandro Nesta and Carles Puyol. León’s playing style is quite similar to these legends especially in terms of defensive duties.

For instance, León usually resorts to sliding tackles whenever she feels that the situation needs that sort of action in order to save her team from imminent danger. And the impressive thing here is that she does that quite often, with confidence, determination and without being afraid. That’s why she usually succeeds at intercepting the ball without necessarily committing a foul despite using tackles.

Being usually able to judge the situation correctly and make the sliding tackle decision at the right timing is what makes it successful and that’s how excellent defenders get out of complicated situations. You can see in this example how León made the sliding tackle at the right timing and as soon as she knew that a tackle would be the perfect and the only solution to such a situation. Given that the player was about to be in a one-on-one situation with Barcelona’s goalkeeper if not for León’s intervention at the last second. The picture just shows the second before the execution of the tackle. 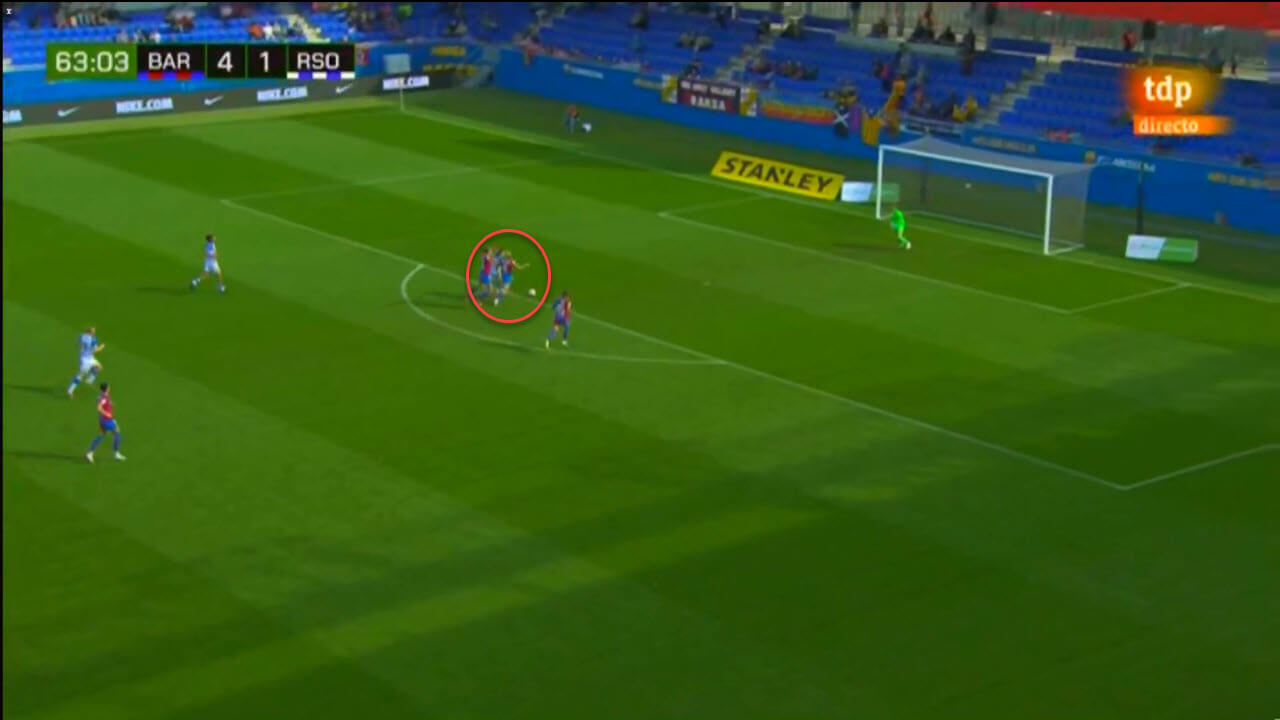 In the following example, León decided the make the sliding tackle after she was running alongside her opponent while both were about to touch the ball. The decision was made at the second when León saw that her opponent was able to surpass her using her pace. That’s why she opted for a tackle to prevent her from exceeding her. However, if the decision and the time of the execution of the tackle were a half-second late, León would have been sent out since committing a foul at that area of the pitch and while being the last defender means a red card. This is what makes the difference between average defenders and excellent ones, decision-making and rapidity of the execution. 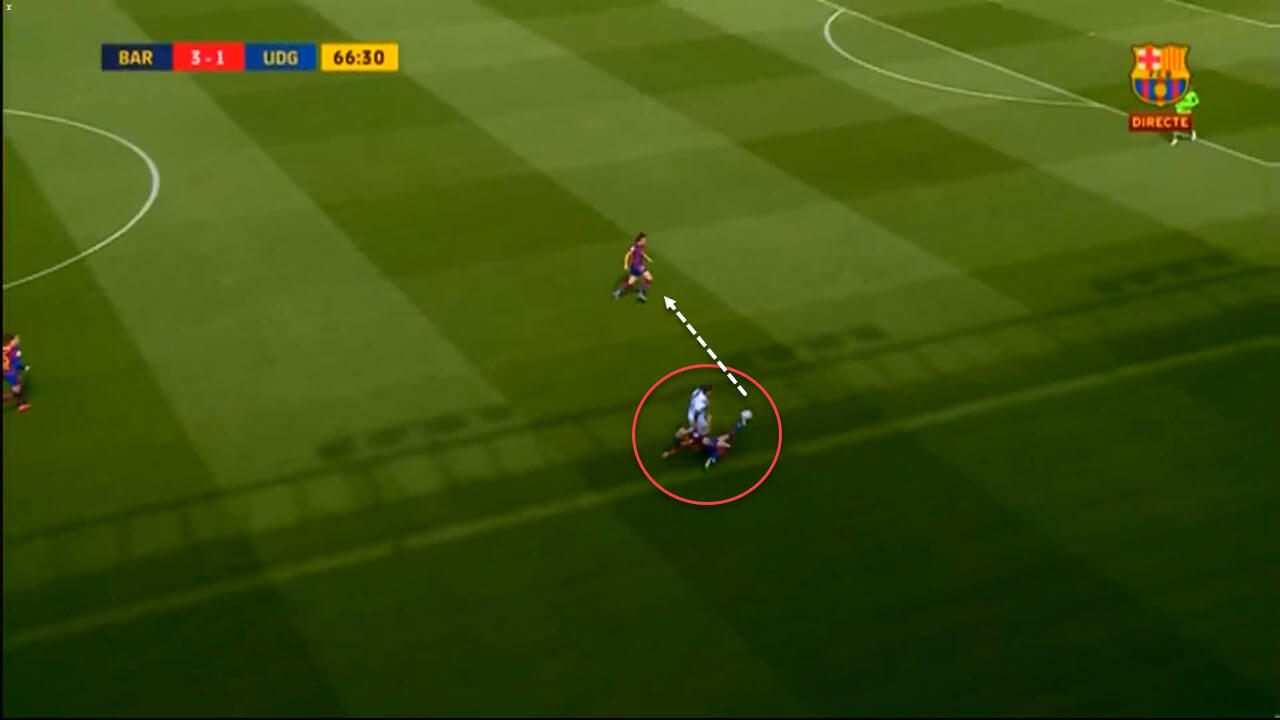 León is not only excellent when defending against counter-attacks or by saving her team from clear goalscoring chances. She is also good at reading the game tactically and at anticipating passes to attacking players in order to prevent her opponents from reaching her team’s own half easily and allowing her team to get even more possession time.

In this UEFA Women’s Champions League match against Manchester City, León was able to anticipate the passes that were directed towards Ellen White successfully through relying on sliding tackles as well, like you can see below. 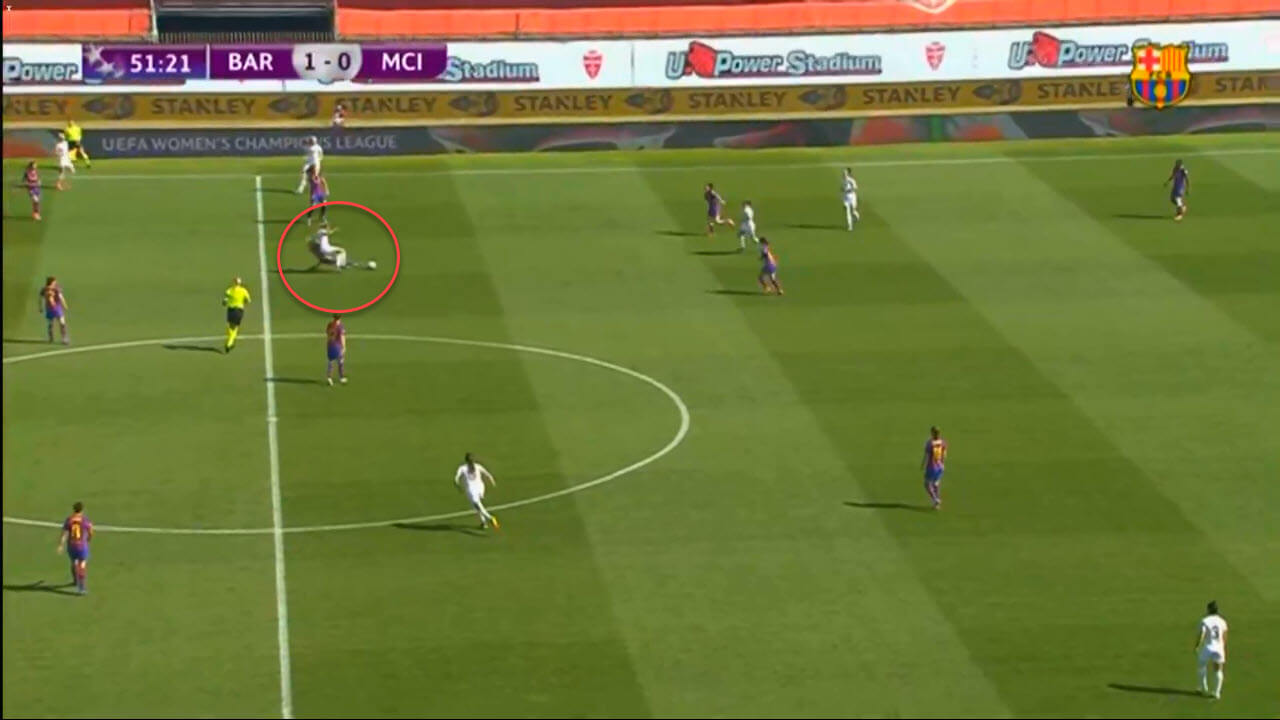 Such clean tackles were fundamental for keeping the opponents away and for giving extra confidence to León’s teammates. Plus, León usually makes sure to prevent opponents from launching counter-attacks while most Barcelona players are in attack. Her ability to read the game helps her to determine the source from which the counter-attack would start and as soon as she notices such actions, she does not opt for retreating to defend but rather for running towards the player intending to advance with the ball and intercept it. In this example she did it with a sliding tackle, knowing that she would reach the ball before her opponent. 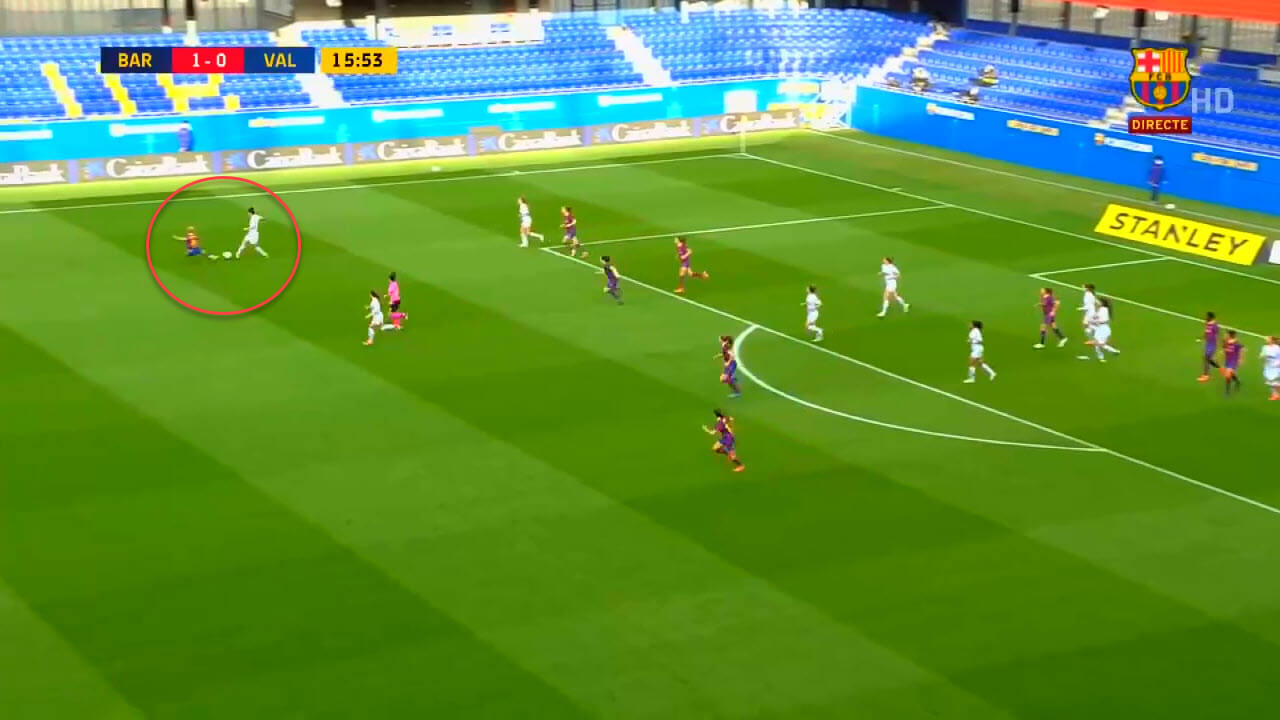 León is also an excellent passer, having a passing accuracy of 90,2% overall, with 81,9% of accuracy for passes towards the final third. These two numbers are huge for a centre-back, and they prove León’s excellent role in playmaking and supporting her teammates in midfield and attack. In fact, León always tends to switch the play through long-range passes, allowing her teammates to be unmarked and therefore create danger. With Barcelona always relying on wingers in attack, such crosses from León can always be fruitful, like the one shown below. 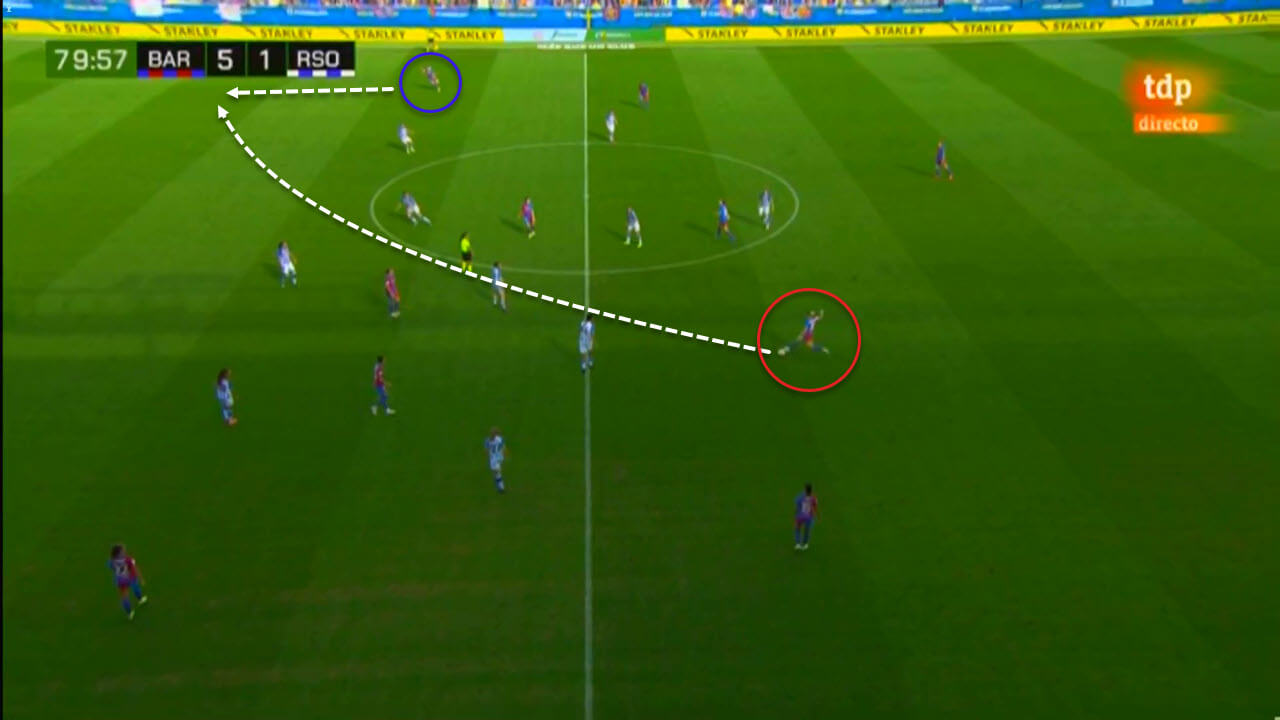 León was also able to make assists to her teammates since she is a specialist in corner-kicks. Moreover, she provides great header passes and does well when being inside the penalty box during set-pieces. She scored some goals from such positions yet she can improve her goalscoring average in the future even though that’s not her main role.

But given that she has some excellent shooting skills and power, León can exploit this trait in her favor and attempt to shoot more in set-pieces, second balls or when playing indirect corners, like she did in this goal action. 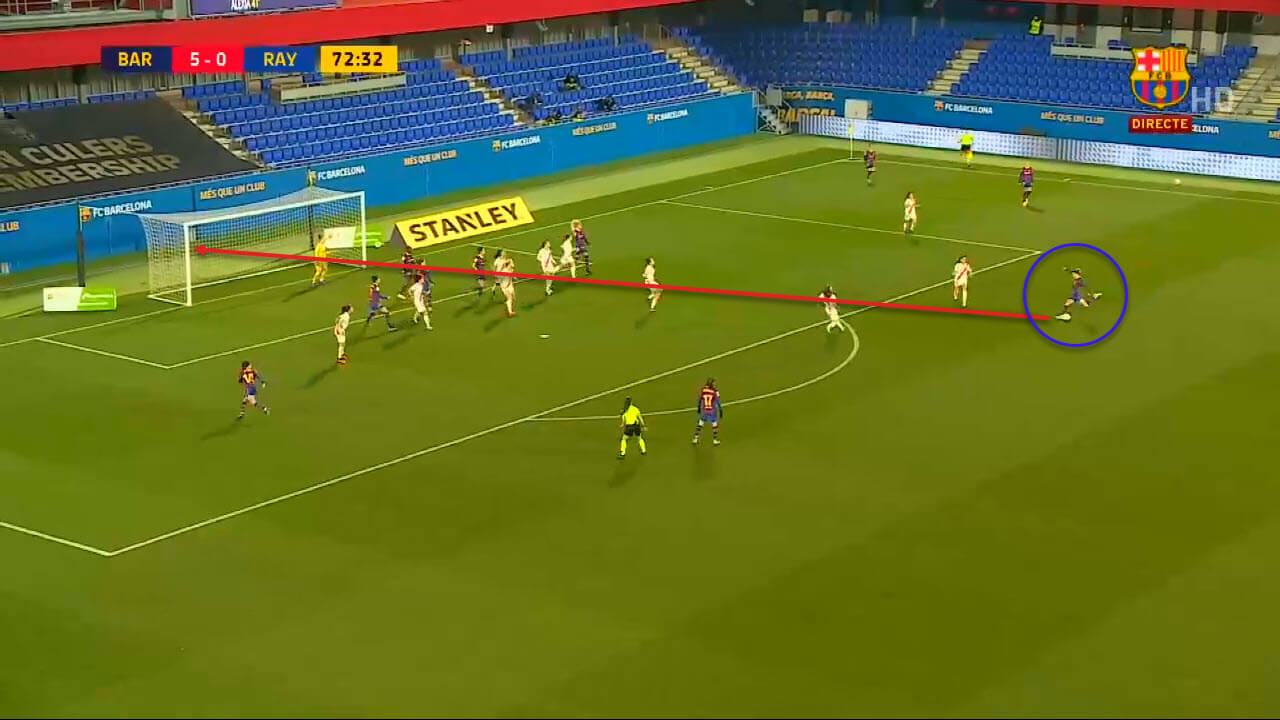 Mapi León is already one of the best defenders in the world and she proved on several occasions that she has a powerful character and excellent skills as a defender. Apart from being already one of the pillars of Barcelona, León will be extremely important for Spain during their participation in the upcoming UEFA Women’s Euro 2022.