Caio Henrique is a 24-year-old Brazilian left-back currently playing for AS Monaco in the French Ligue 1. Henrique joined the french side in the summer before the 2020/21 season commenced, and was brought in for just €8 million. Since this transfer, Henrique has gone about growing his reputation as one of Europe’s up and coming left-backs, and just this previous summer he admitted he was flattered to be linked with Barcelona and Paris Saint-Germain.

Whilst the title is all but a formality, given PSG’s 13 point lead at the halfway point in the season, the rest of the league is incredibly tight. Monaco currently sit in sixth position, four points off of second but equally four points ahead of 12th place. Monaco have a team littered with exciting young talent, but failure to qualify for Europe this season would likely see many move on, and Henrique will be on plenty of teams’ shortlists ahead of this summer, or perhaps even this month.

This tactical analysis and scout report seeks to highlight Henrique’s key qualities, providing an analysis of some of his individual talents as well as those that fit in with Monaco’s tactics.

Henrique is a positive and pacy attacking full-back, and as such could perhaps be lazily characterised as a modern-day full-back who places too much emphasis on attacking rather than defending. However, this couldn’t be further from the truth. While it is true that Henrique places an emphasis on consistently providing height and width in attack he is a committed defender, who drops back instantly on a loss of possession, and is bullish in defensive duels.

To look at some of Henrique’s data in context we have looked at every left-back to have played 500+ minutes in Europe’s top five leagues this season. 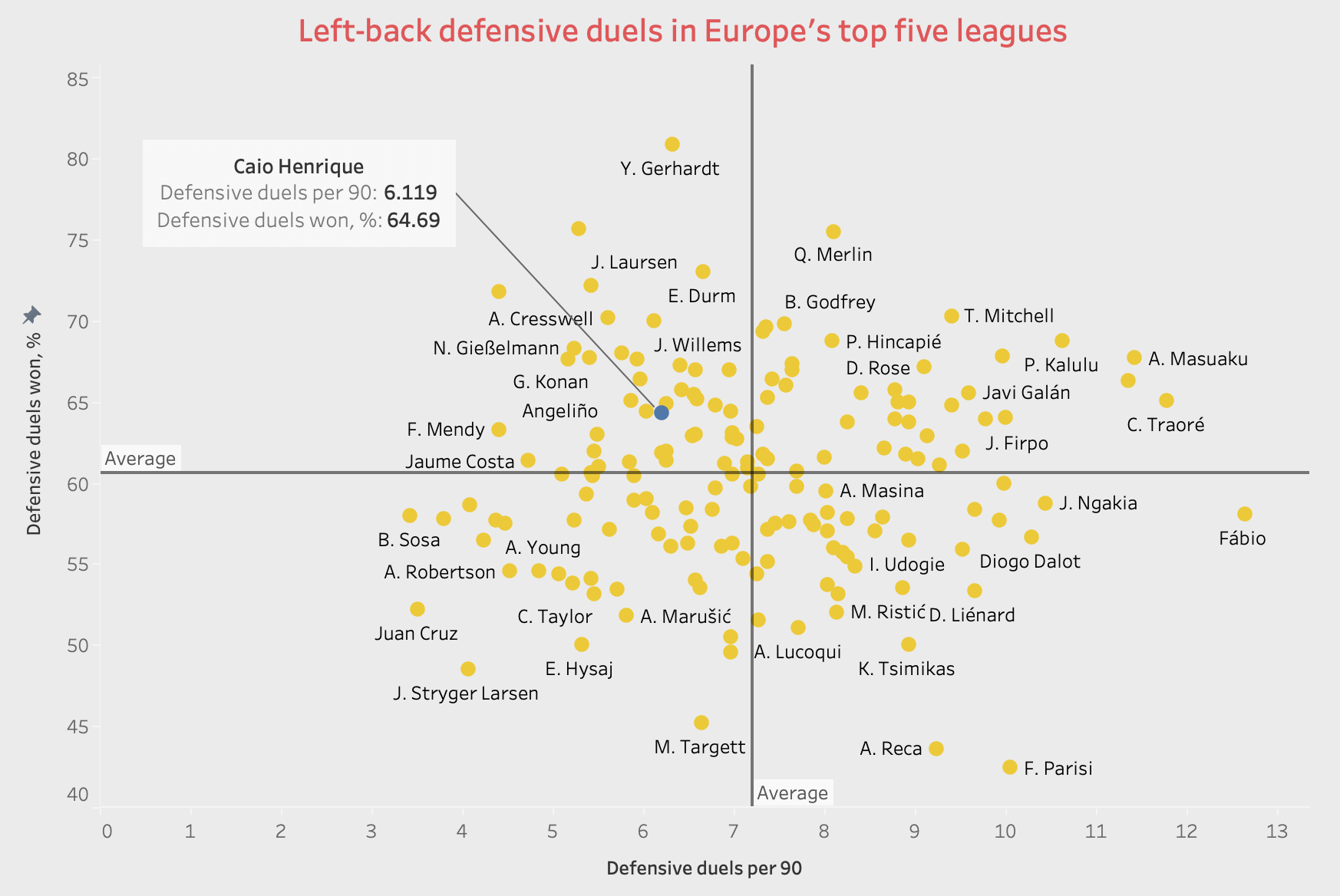 Admittedly there is one glaring flaw in Henrique’s game which will need considerable work which is his heading. He stands at 1.79m, or 5’10”, which is quite tall for a full-back, but performs abysmally in aerial duels.

The graph below shows that he is one of the weakest in Europe’s top five leagues, with a volume of 1.458, which is below the average, whilst his 24.24% win rate is incredibly low. 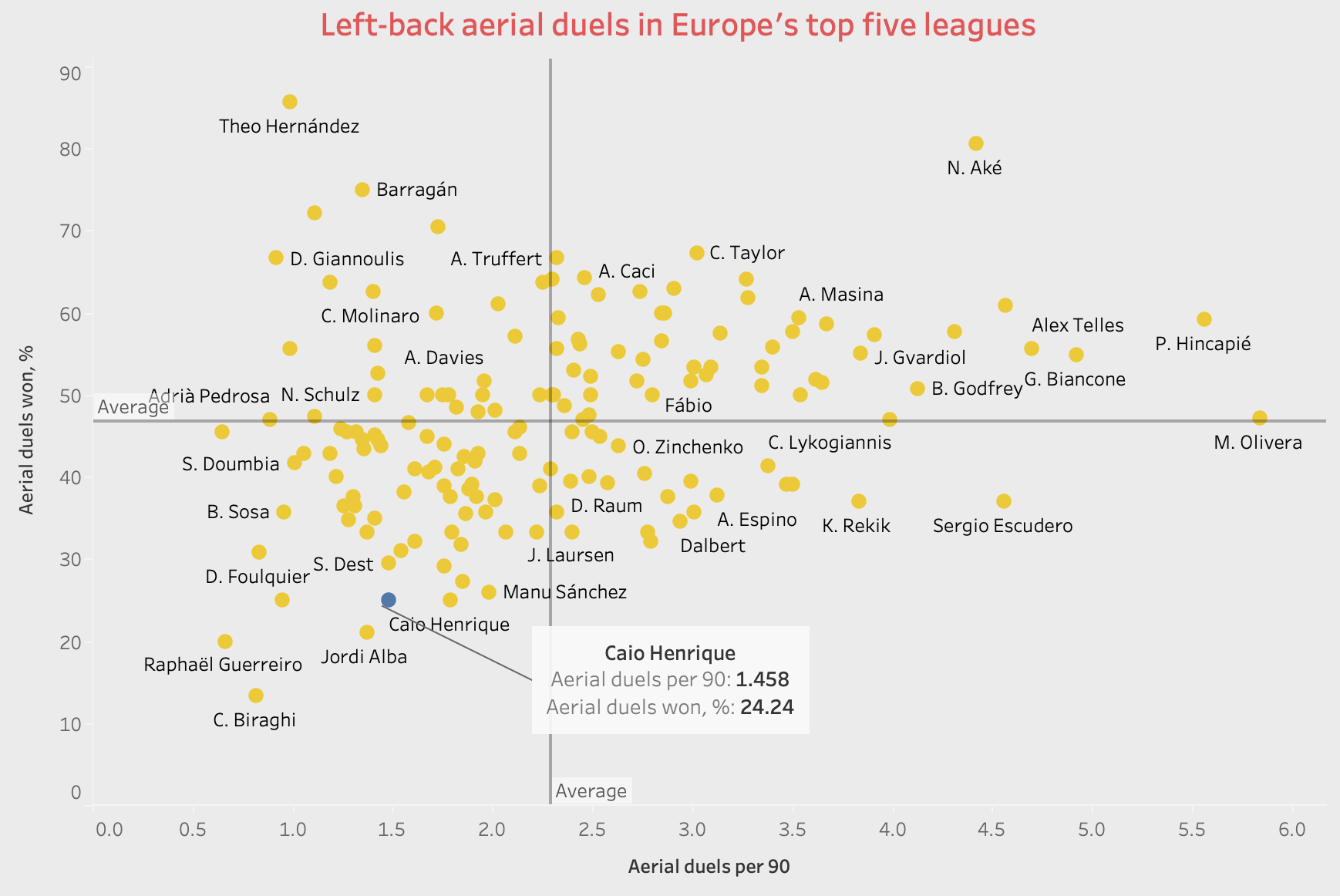 A lot of Henrique’s defending comes in moments of transition. He is often far forward in a position most left-wingers would find themselves in, but Henrique has noticeably impressive pace, over short distances with good acceleration, but also over a longer distance.

We can see such an example of this in the image below where Monaco find themselves considerably out of shape in a moment of transition. Henrique’s initially anticipation of a loss of possession is quick. 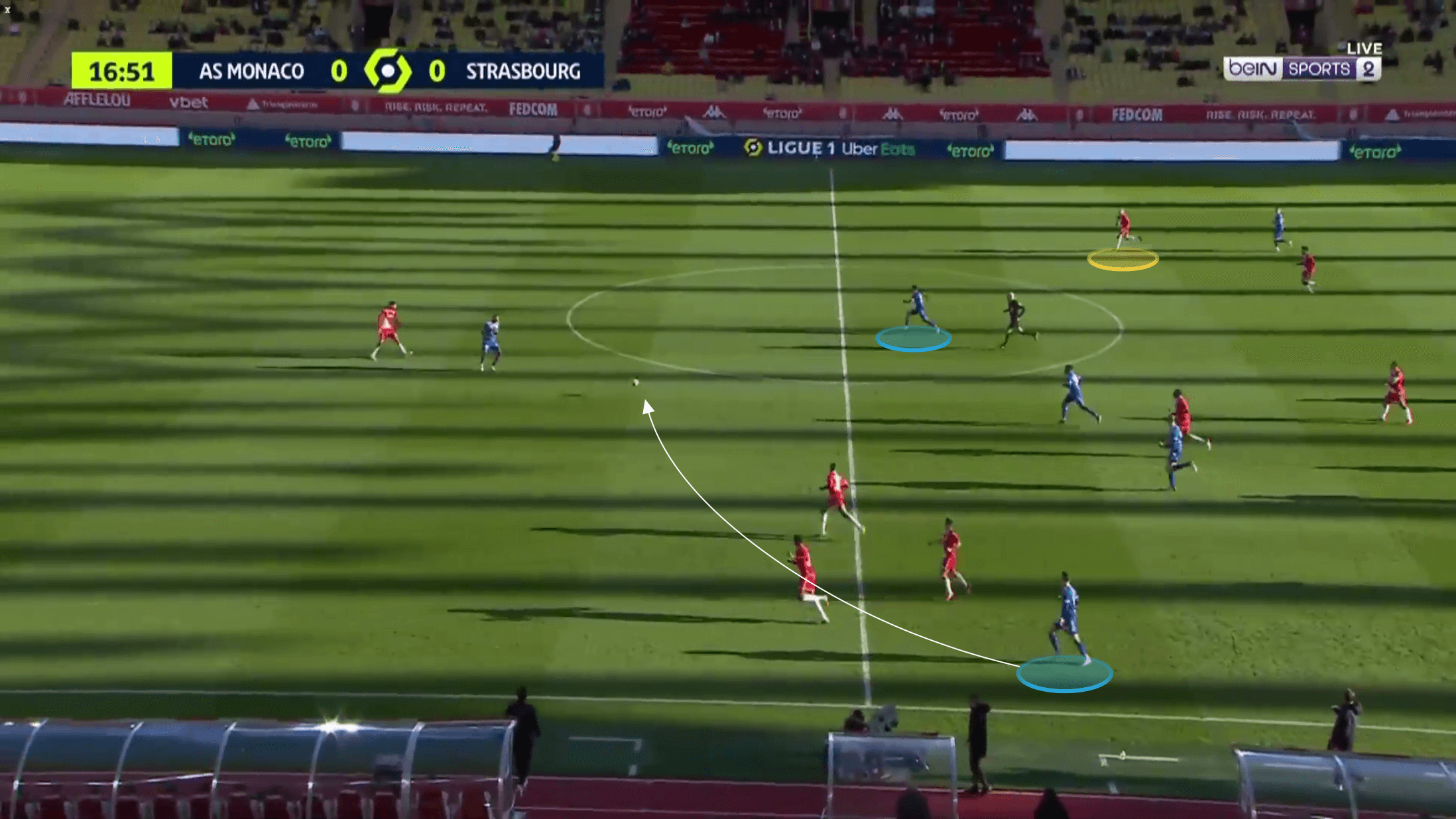 We can see how fast he recovers in the following image, getting touch-tight and immediately regaining possession, getting to the ball before the previously highlighted Strasbourg attacker. 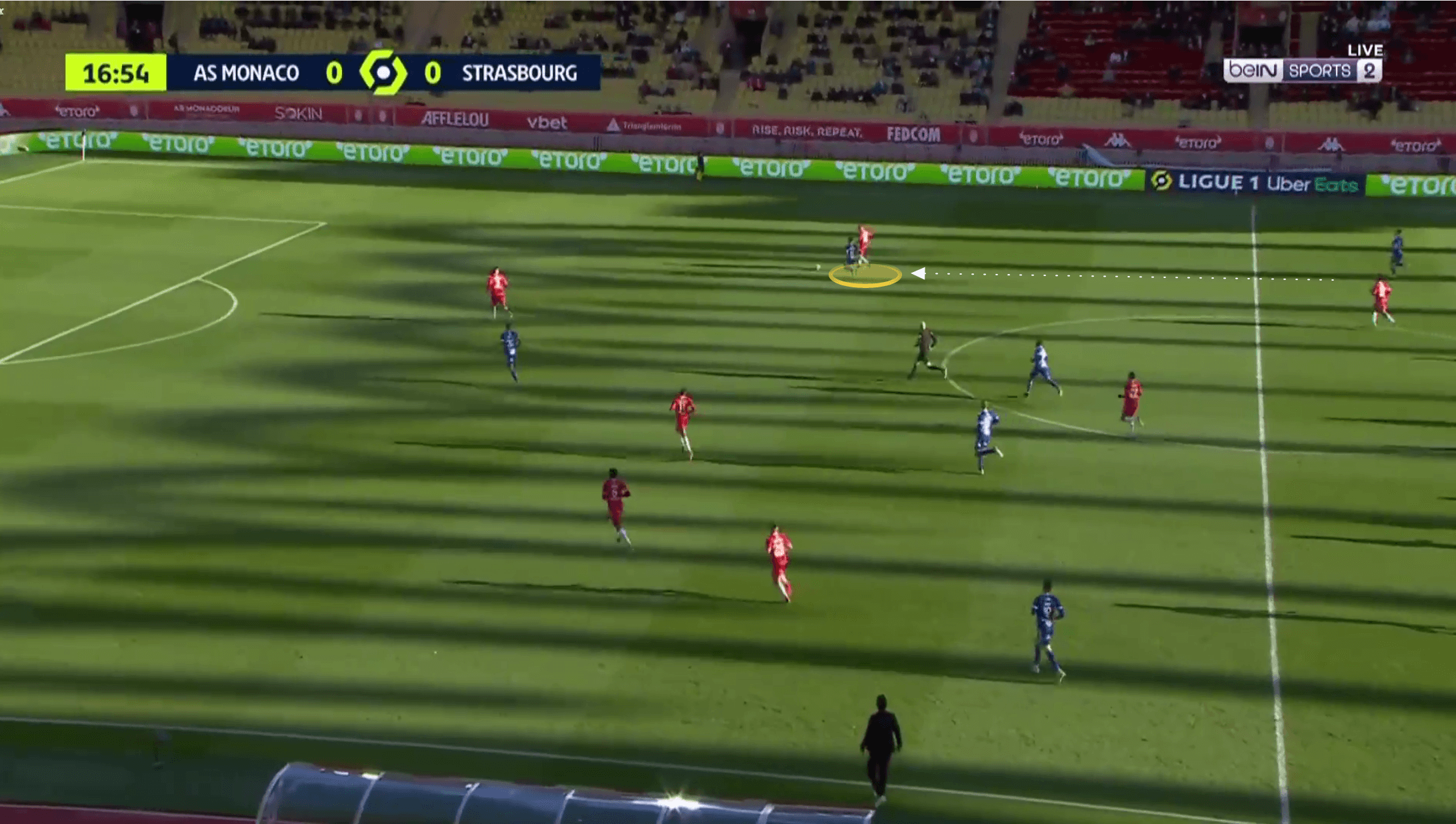 Henrique’s knack for making these kinds of recovery challenges so effectively allows him to be more cavalier with his positioning. He can push far forward and know he has the recovery pace to not only close the space down immediately but also to time a challenge. Henrique does well to avoid fouling an opponent travelling at pace and will look to get side-on, shoulder-to-shoulder, with them, before simply sliding his outside foot onto the ball and getting his body between ball and opponent. 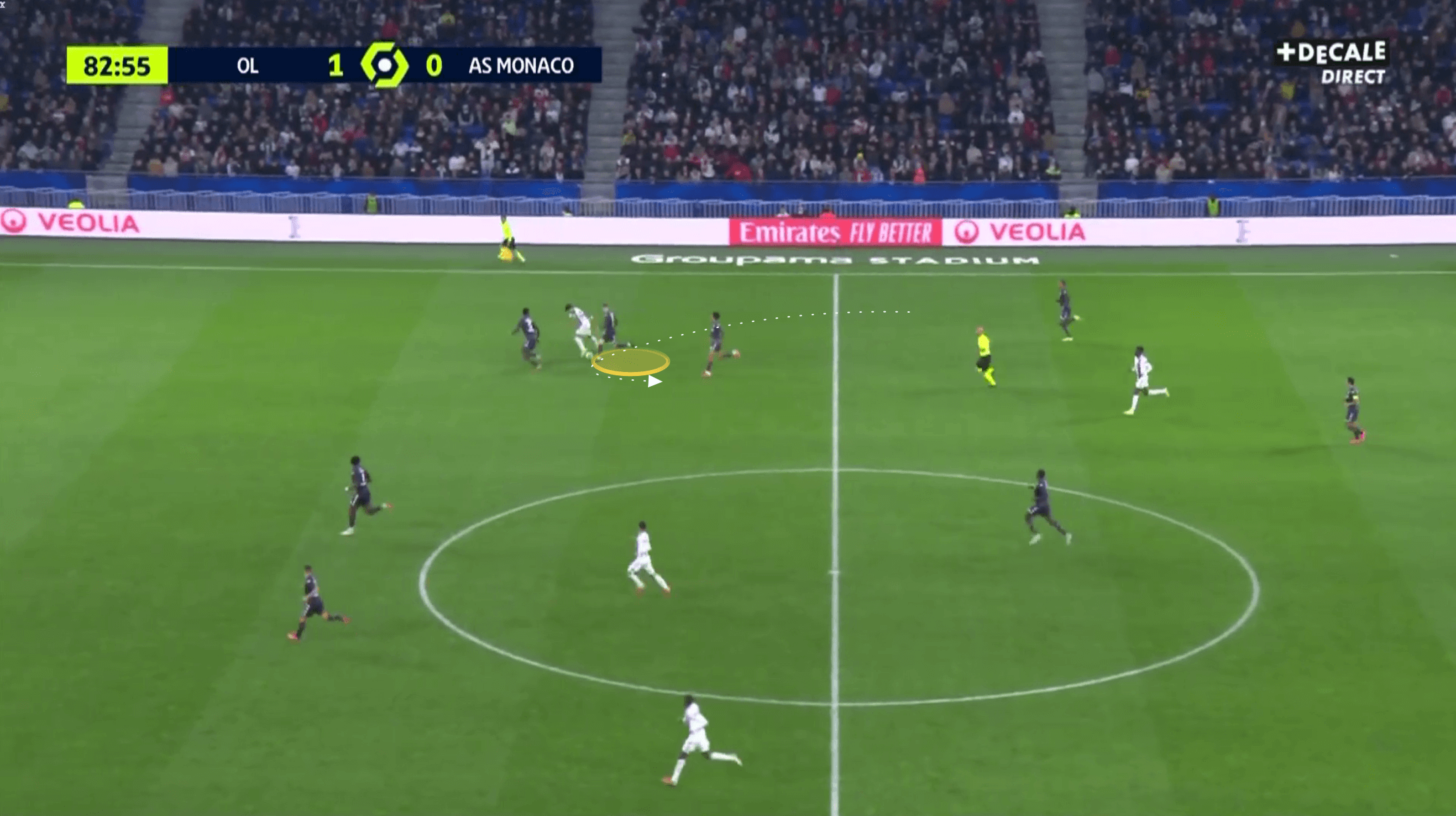 Positioning and impact in attack

We can see from Henrique’s heat map in the image below that he spends a significant amount of time in the opposition half, and is more active here than he is in his own half. There is a fair amount of action to the side of the 18-yard box, and a decent amount of penetration inside the box too. 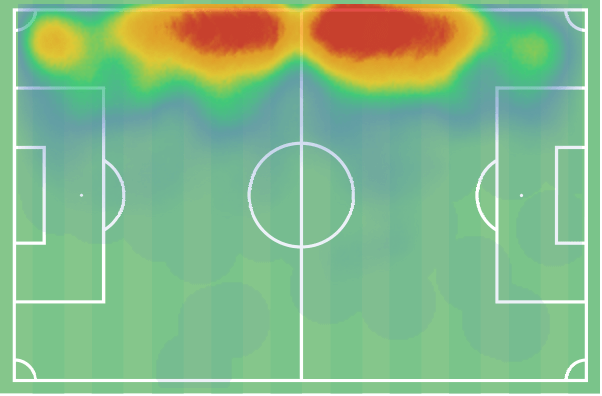 Henrique doesn’t operate as a wing-back, at least not on paper. Monaco nearly always opt for a back four, of which Henrique is part of. However, he uses the depth provided by one of their double pivots to give him the freedom to push on down the left flank.

Even after playing a forward pass from a deep position inside his half, a common characteristic of his game is to then proceed to immediately push forward down the left-flank and overlap the winger in front of him. 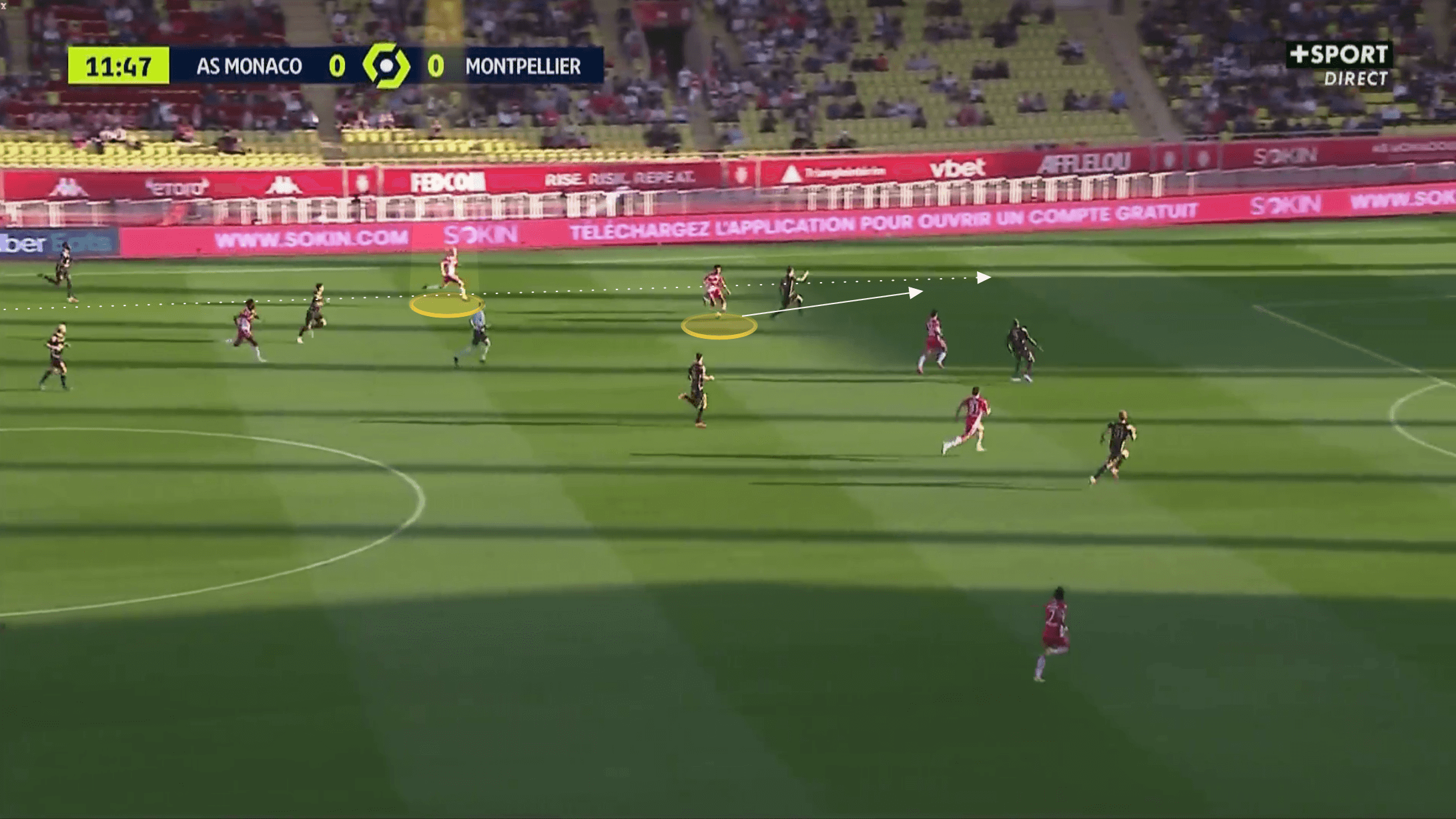 He moves forward as quickly as he does trackback, and can quickly create a 2v1 on the opposition full-back with few players able to track his run effectively.

Henrique chooses the right moments to push forward at pace, but to his credit always provides some sort of presence down the left wing. If an attack is developing on the right side of the pitch he will take his time to push forward, and in doing so seek to avoid getting attention from the opposition and being marked. He can ghost into dangerous positions late-on in an attack and can be found like in the image below, inside the opposition 18 yard-box. 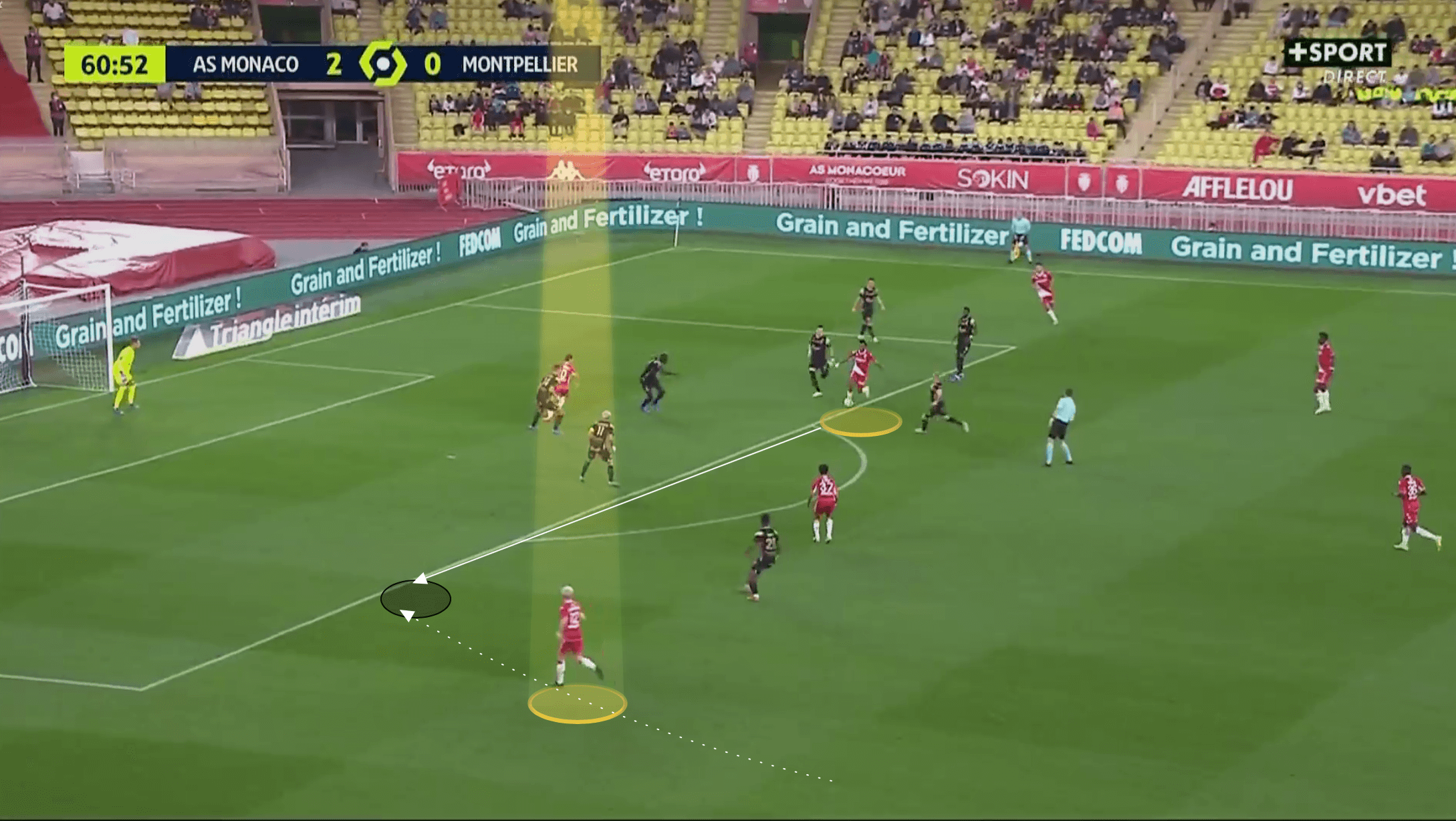 Henrique puts in a good amount of crosses and is dangerous when doing so, which we will move onto momentarily, however, he is also a highly talented creative passer. He has seven assists this season coming from a culmination of crosses and through passes.

Henrique has averaged 5.12 passes to the final third and has completed an impressive 64.1% of these, but on top of this, he also attempts an average of 3.24 passes to the penalty area per 90 and completes 45.7% of these.

He is quick to recognise the opportunity to thread a pass into the space behind an opposition defence and will adjust his pass based on the angle of his positioning.

Below we can see him in a deeper and more narrow position than where we have seen him previously. He is able to thread a pass into the space behind without over-hitting it, and will consistently find the gap in between opposition defences with accuracy. 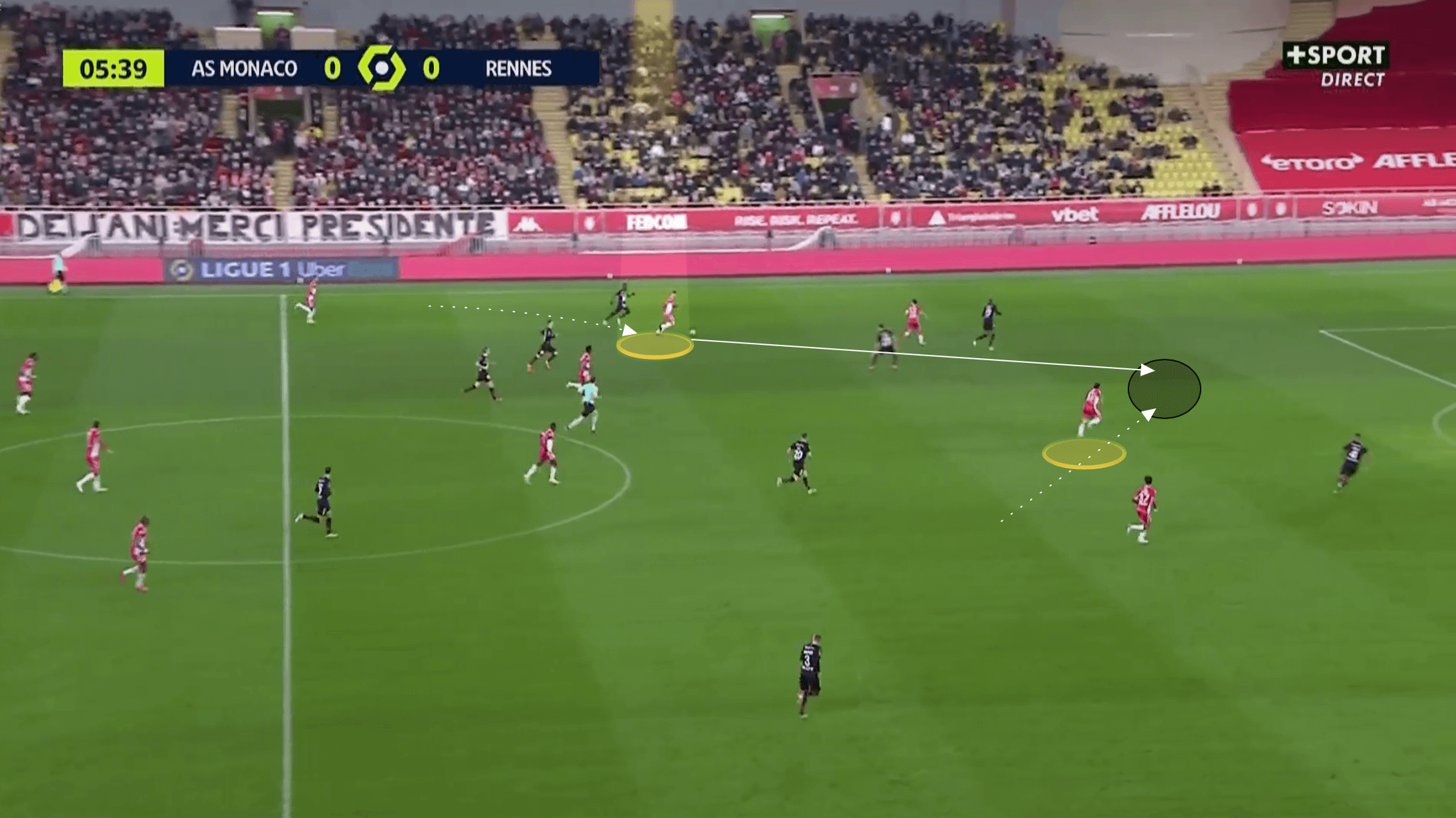 Henrique will hit similar through-passes/ crosses from much deeper positions too, recognising the space behind an opposition defence to do so. He will whip the ball in front of his attacker generally on the floor, and arc the ball away from goal. 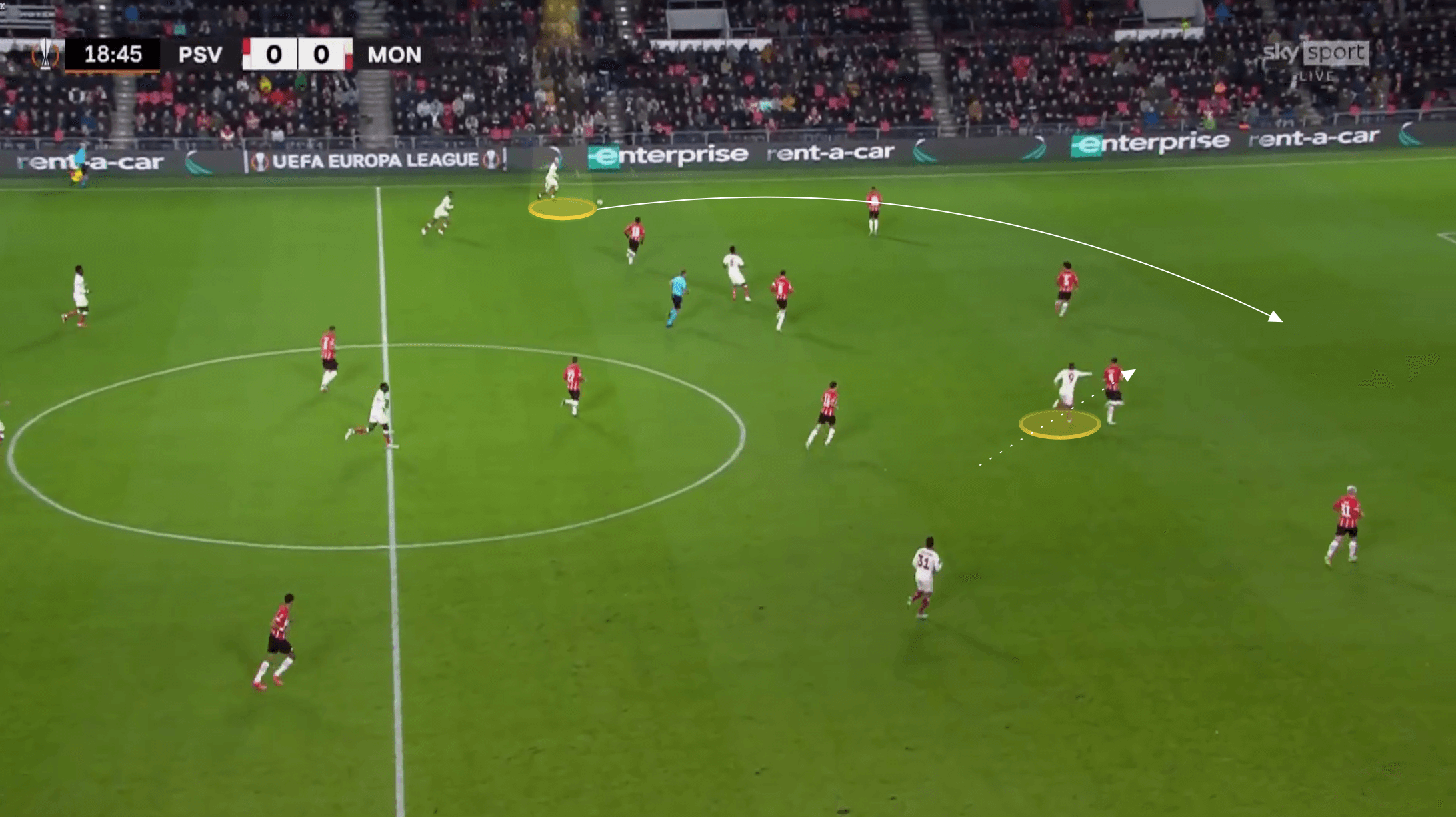 We can see Henrique’s crossing statistics in line with the rest of the same data set in the graph shown below and they make for interesting viewing. 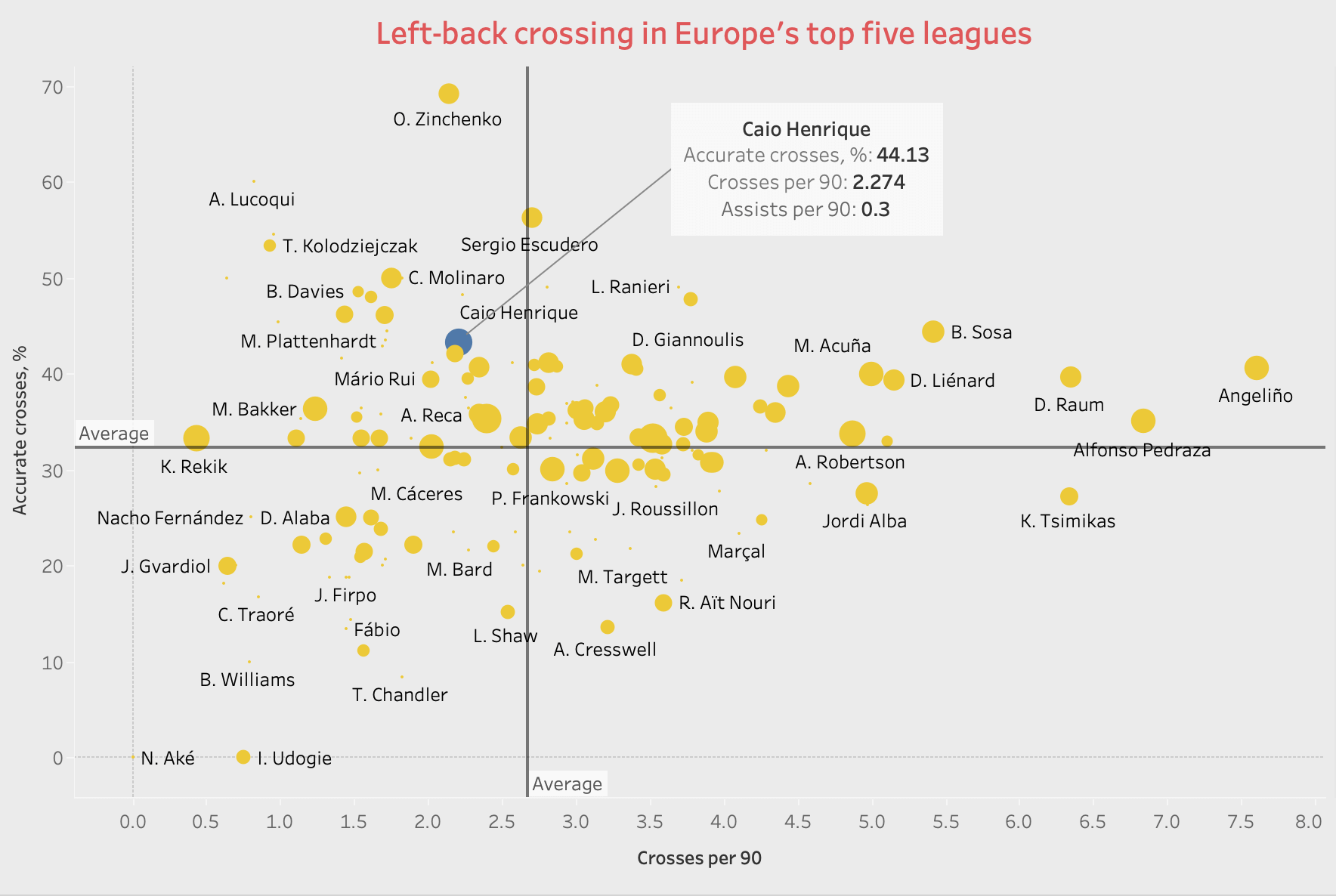 We can see that whilst his volume of crosses is slightly below the average, his 44.13% completion is outstanding, with only a handful of players attempting more crosses than him with a higher percentage.

We can also see, as indicated by the size of his plot point, that his 0.3 assists pre 90 is one of the most impressive of any left-back in Europe’s top five leagues this season.

Henrique has a variety of crosses and is highly accurate across the board. He can whip balls into the box at head height and find a target, but he is smart with his decision-making and doesn’t blindly deliver the ball into the area. He assesses the space and likelihood of his delivery meeting its target and it is no surprise he has an impressive completion.

Henrique will engage in quick exchanges with his winger or attacking teammates inside of him, and whilst he can deliver from close to the touchline he is confident under-lapping and delivering from a closer position to the goal. 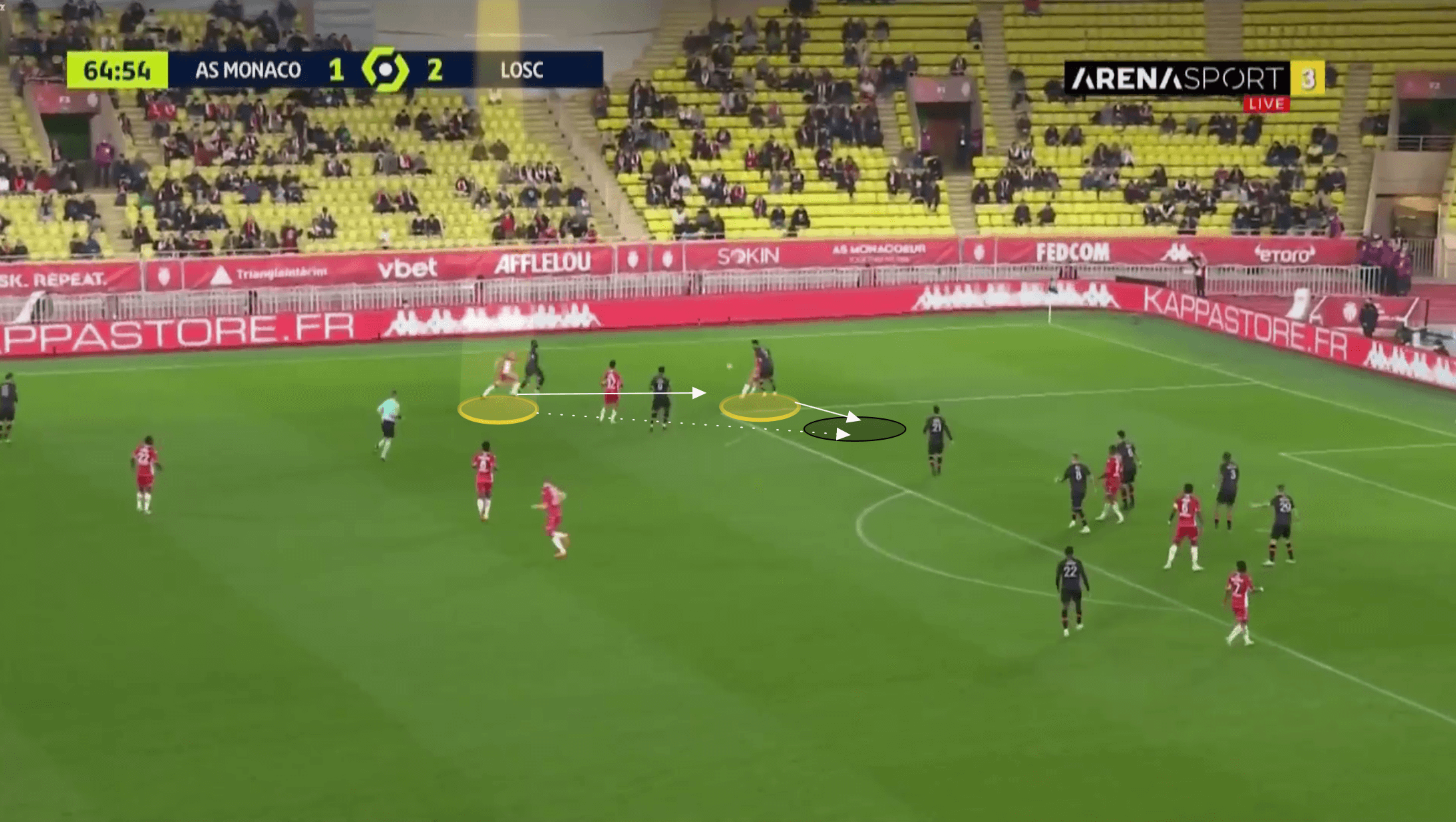 We can see him doing this in the previous image before the next image shows him making the cross. In this example he has the opportunity to whip the ball across goal but sees the defence is in a good position and instead opts to stand the ball up, slightly shy of the six-yard box, allowing the forward to head the ball in space. 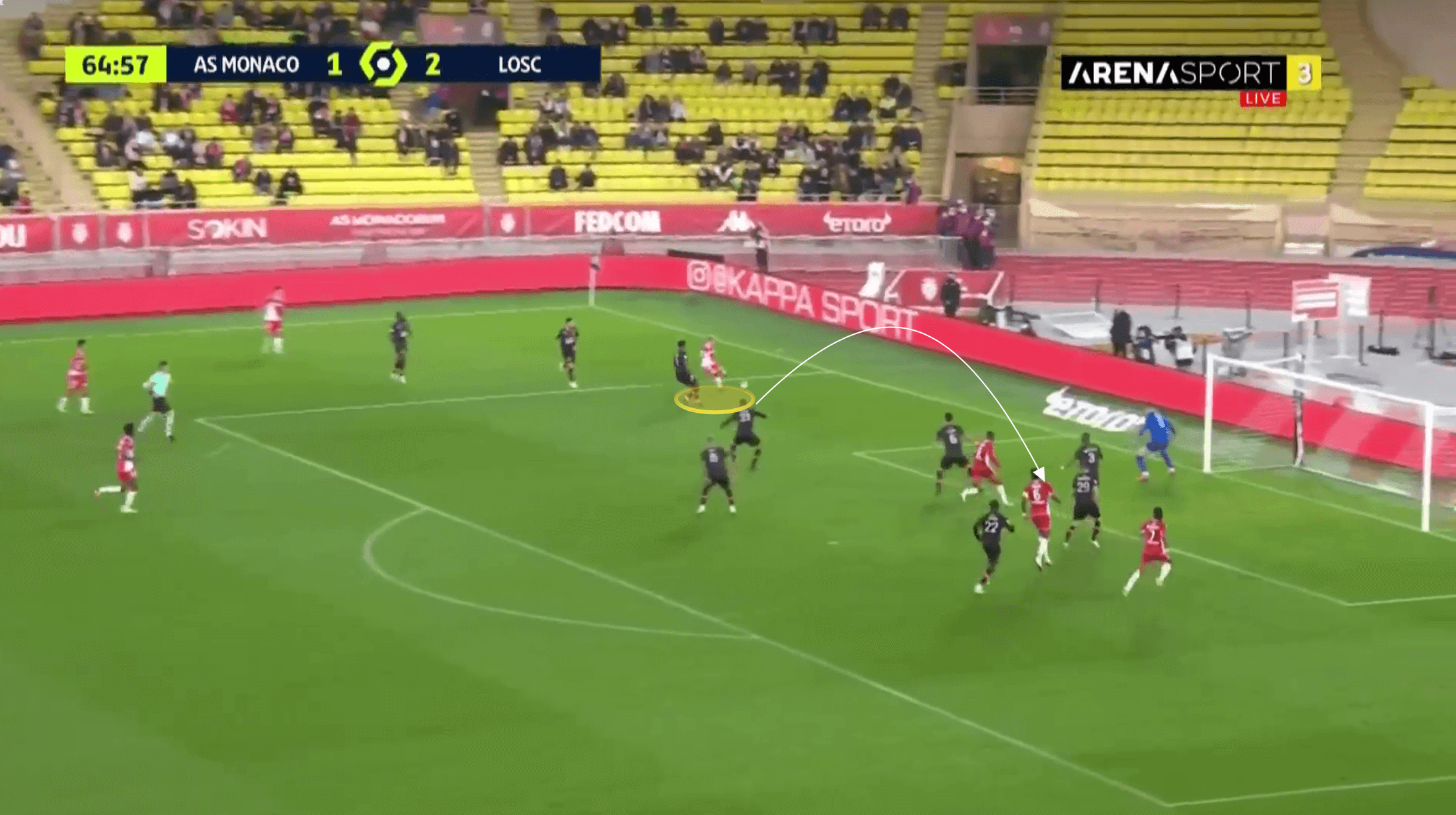 He can cross whilst on the run and can deliver the ball accurately even when taking the cross on first time. Below we see him making an assists in Europe this season against PSV, with a first-time ball played across goal, after overlapping down his left-wing. The accuracy is impressive given he has to thread the ball past three PSV players and still get the ball into the path of the highlighted attacker. 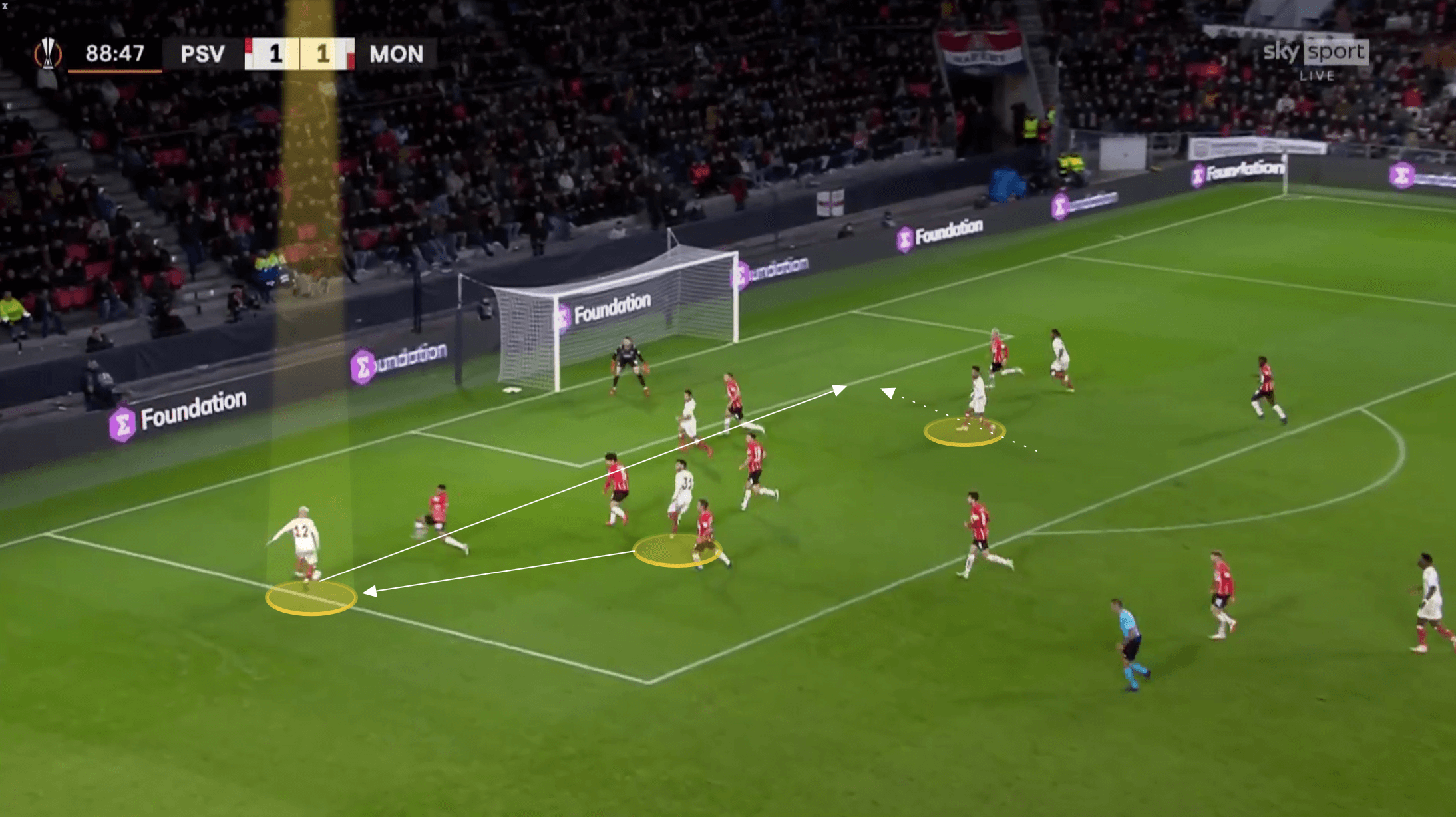 Henrique is an elite-level left-back who will undoubtedly be playing for a side playing in the upper echelons of European football within the coming seasons. He would provide quality competition or even warrant a starting-berth in a team that allow their full-backs to push on aggressively, whether when playing as part of a back four or a back five. Henrique is versatile in that he would clearly benefit a team who thrive in moments of transition, given his pace and ability to drop back effectively, however, his crossing would also lend itself to a team who dominate possession and want their full-backs to sit high and allow their wingers to move inside.