Over the last decade, Monaco have gone through severe ordeals, as they landed their big-money takeover in 2011 which saw James Rodriguez, Joao Moutinho and Radamel Falcao join the principality. Once the money dried up, Monaco had to go in a new direction, which saw youth take the forefront within the club’s set-up. With Luis Campos, at the helm of Monaco’s adolescent revolution, the clubs began to climb up the table. With the triumph of the Ligue 1 title Champions League semi-final in 2017 and the exodus shortly afterwards, youth is still thriving high, as under new manager ex-Bayern Munich Niko Kovač, Monaco finished third in the 20/21 Ligue 1 season and only missed out on the Champions League group stage through qualification.

Similar to Monaco, Lille has had a hard fight back to the top after finally winning the title in the 2020/21 season, with the last winning the competition in 2011 with ex-Chelsea star Eden Hazard making his trading. In recent times, both teams have seen better times, but both have don’t made the start to the season they would have wished, and much improvement is needed from both outfits.

In this tactical analysis, I will begin analysing the intricacies that were involved during Lille’s lighting start of this match, as well as Monaco’s shortcoming in and out of possession while showcasing what they attempted. Lastly, I will be shining light upon Monaco’s resilience after a very tough start to this match. 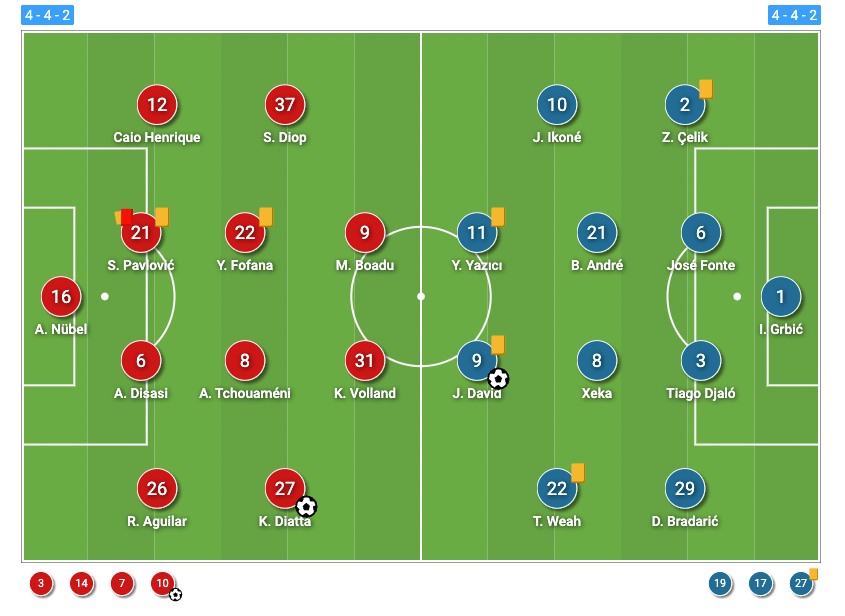 Lille manager Jocelyn Gourvennec could have asked for a better start when coming. Into this game, his side scored two goals within the first nine minutes of this match against Monaco. While the goal came quick, Lille was able to compose themselves and style away from home and showed no signs of being frantic. The team sheet shows Lille within a 4-4-2 formation but during this match, Gourvennec men utilised different variations within all three phases. Within the first phase of play, Lille’s back four was quite unorthodox as they adopted an asymmetrical backline in regards to the positioning of their full-backs.

Young Croatian left-back Domagoj Bradarić was pushed slightly higher which is a moderate contrast to his full-back counterpart. Zeki Çelik, who was positioned more conservative on the right-hand side. With the difference regarding the positioning of the full-backs, Lille made use of a back three at times. In addition, the midfield double pivot consisting of Benjamin André, Xeka altered throughout; the two midfield players stacked and did not operate on the same lateral line. Benjamin Andre was more inclined to drop deeper and facilitate play within the first phase of play. Xeka, on the other hand, would at times, position himself within the left half-space.

Yusuf Yazıc was a key cog within this Lille side versus Monaco as he was able to find space to receive and create within the final third. The Turkish playmaker was lined up as a striker next to Canadian Jonathan David, but during this match, Yusuf Yazıc was prone to dropping into the number 10 position and right half-space and wing. This motion allowed Nanitamo Ikoné to drop slightly deeper while remaining wide and this came as an advantage due to his ball retention and dribbling ability, the Frenchman can beat the press and progress play forward, as Monaco pressed heavily within wide areas. When Yacic’s and Xeka shift of movement occurred, Lille shape transformed from a 4-4-2 to a 4-3-3/4-1-4-1 formation.

Another strength Lille displayed was their ability to take advantage of Monaco’s aggressiveness throughout the first half of this match. Monaco operated with a ball orientated high press, with their full-backs pushing high as additional pressure. Monaco’s wingers, Sofiane Diop and Krépin Diatta would place themselves slightly narrower to prevent Lille from making progressive passes down the centre of the pitch. Lille understood Monaco wanted their opponents to play around them using the flanks rather than through the centre.

Here, Lille has moved the ball out wide and instantly, Monaco begins to press intensely as they try to deny Domagoj Bradarić time and space to play and win the ball within Lille’s defensive third. 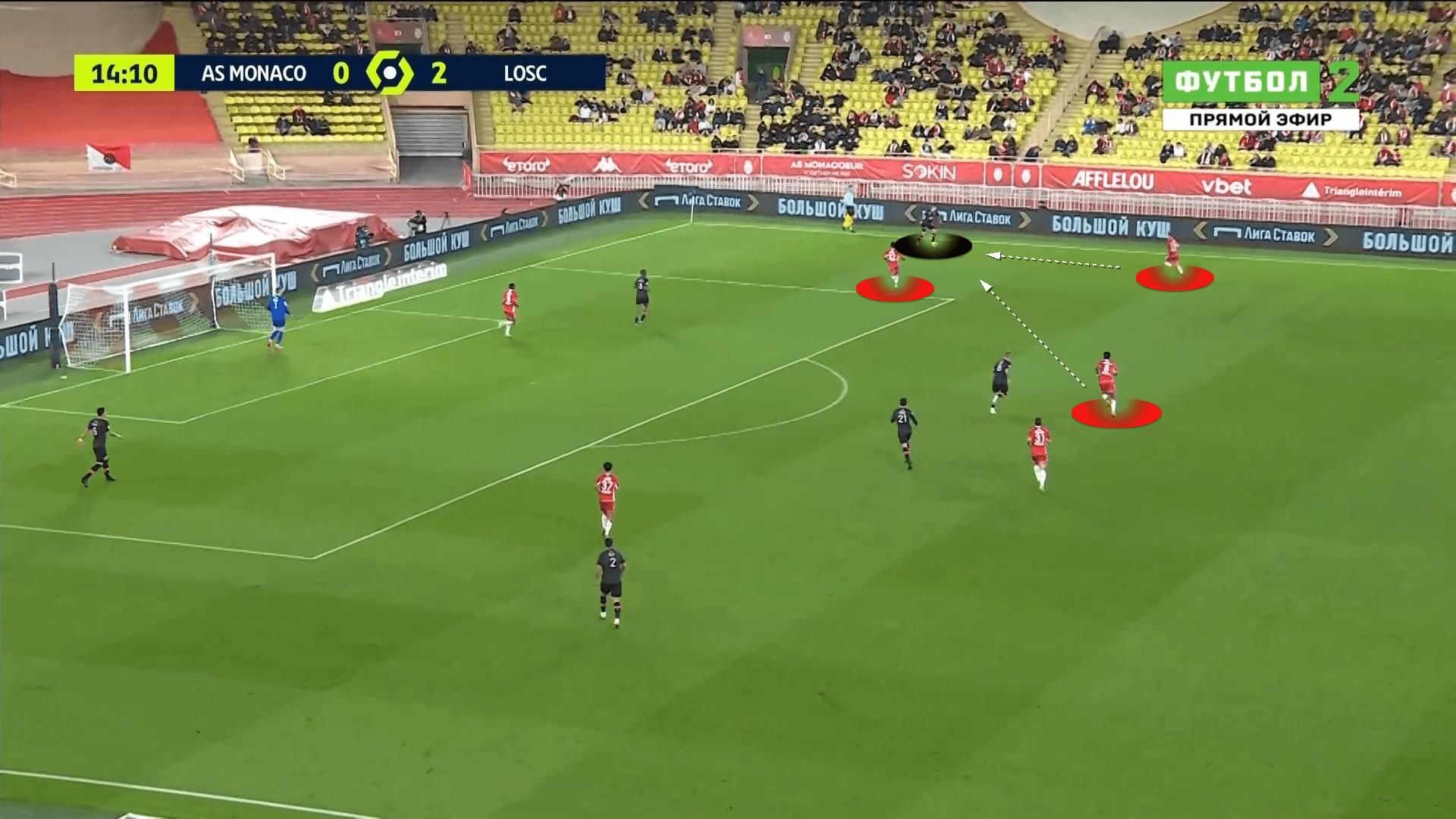 Monaco’s midfielders pushed higher to press, they vacated space within the middle third of the pitch. Jonathan David drops within the inside left channel and Domagoj Bradarić can find him with a chipped base that bypasses Monaco’s press. As the ball travels to David, defender Strahinja Pavlović leaves the defensive line to close down space in front of him but Jonathan David manages to quickly flick the ball to Jonathan Bamba, who has nothing but green grass in front of him. 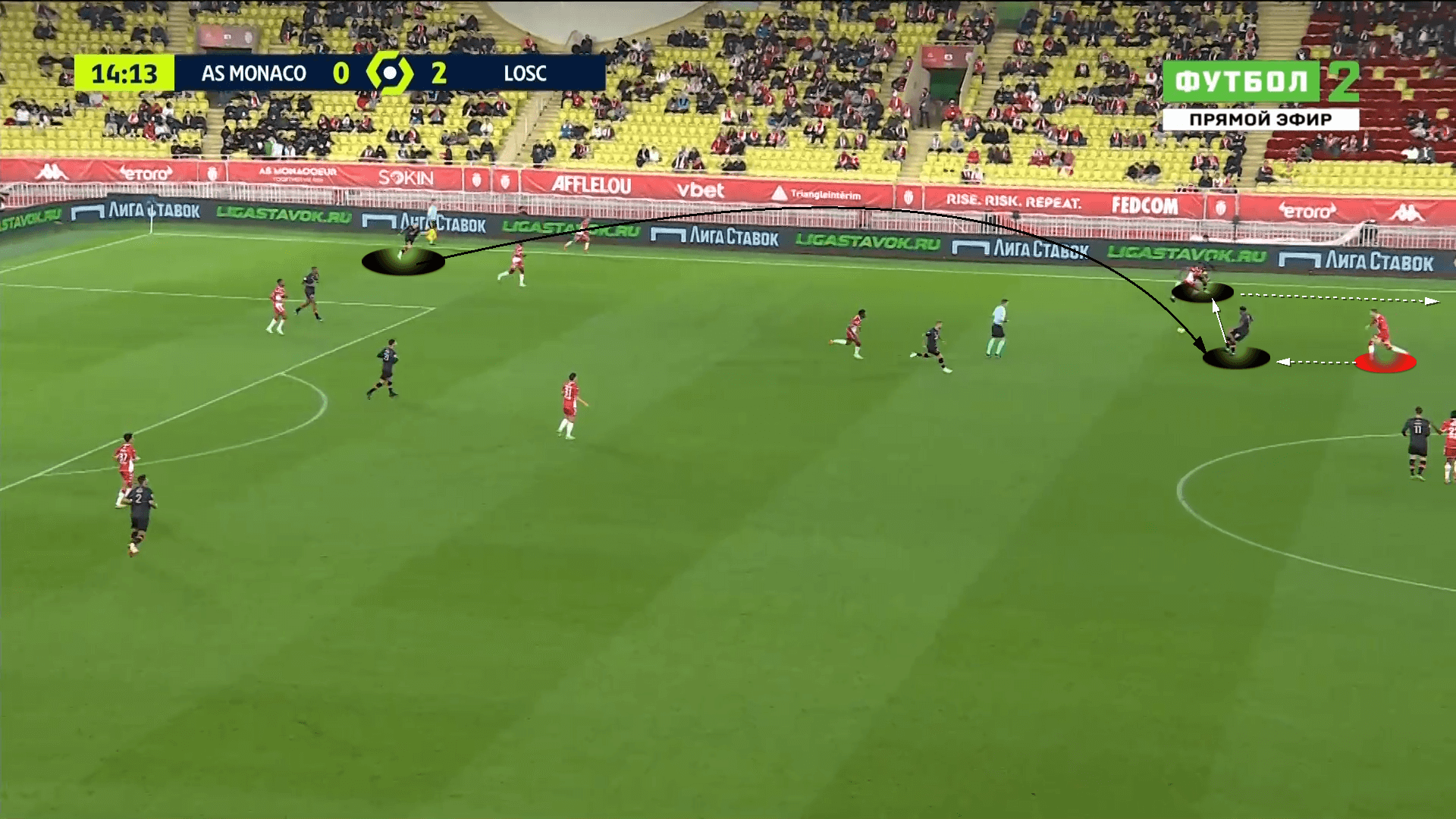 With the great amount of pressure Monaco applied, Lille took clear advantage and now found themselves in an advantageous 3v2 situation in the final third. 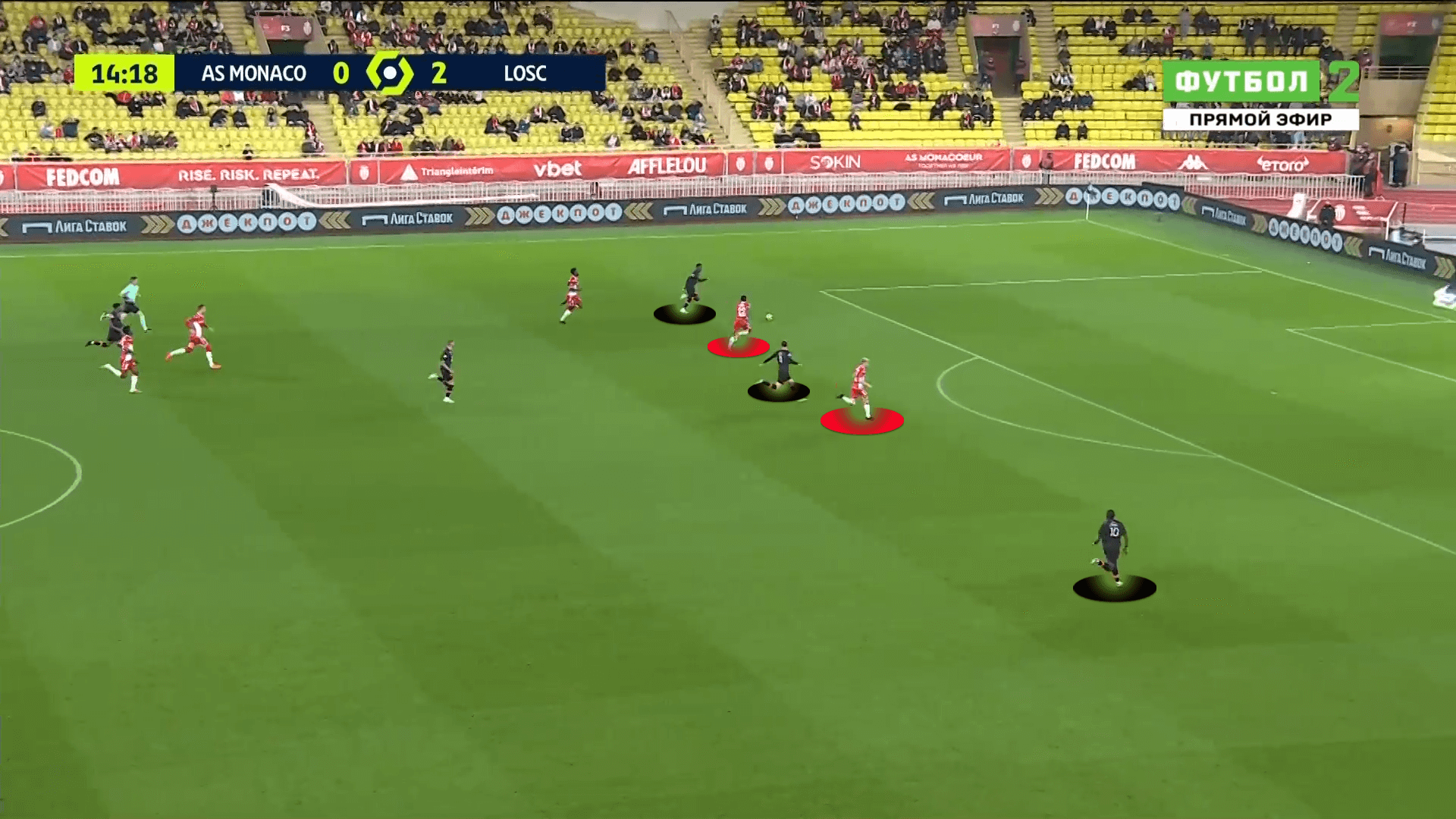 As mentioned previously, Lille started this game the best way possible. This notion cannot be said regarding Monaco. In the previous fixture, Monaco lined up using a 4-4-2 which transitions into a 3-4-3 as Caio Henrique pushed high up the field and joined the attacking line, while the remaining defenders formed a back three. Monaco has used this system since the beginning of last season and has been quite successful for them but Niko Kovač decided to operate with a slightly different system. Instead of using a makeshift back three, Monaco during the first phase of play set up with a standard back 4.

To progress the ball past Lille’s steady defensive shape, Caio Henrique was stationed slightly inverted and when further forward attacked off the ball with underlapping runs. Sofiane Diop was hugging the touchline as a wide option for Monaco’s backline when playing through pressure.

This rotation did not deliver the desired effect as Lille excelled when denying passing into players located within the wide channels and half-spaces, so Caio Henrique, one of Monaco’s best-attacking weapons did not impact the game as he usually does. Another issue that was at the detriment of Monaco was their poor use of a high line. 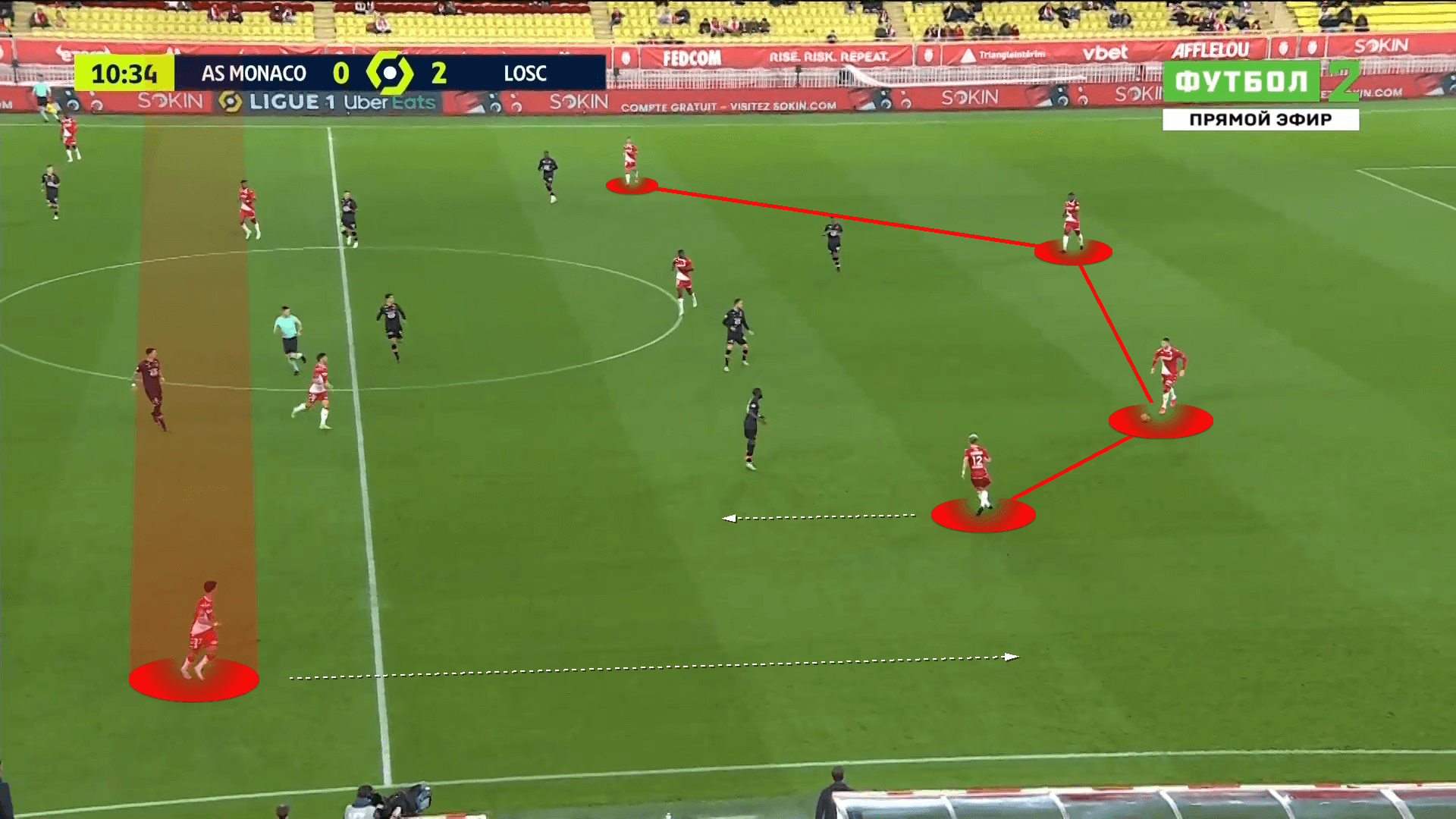 This high line can be seen in action during Lille’s first goal of the night, as Jonathan David shone when on the shoulder of Axel Diassi. As an attempt to remedy Monaco’s first-half shortcomings, Niko Kovač decided to revert to the 3-4-3 system in-possession and Monaco’s line of engagement was not as aggressive compared to the previous half, nevertheless, Monaco could not get anything going. 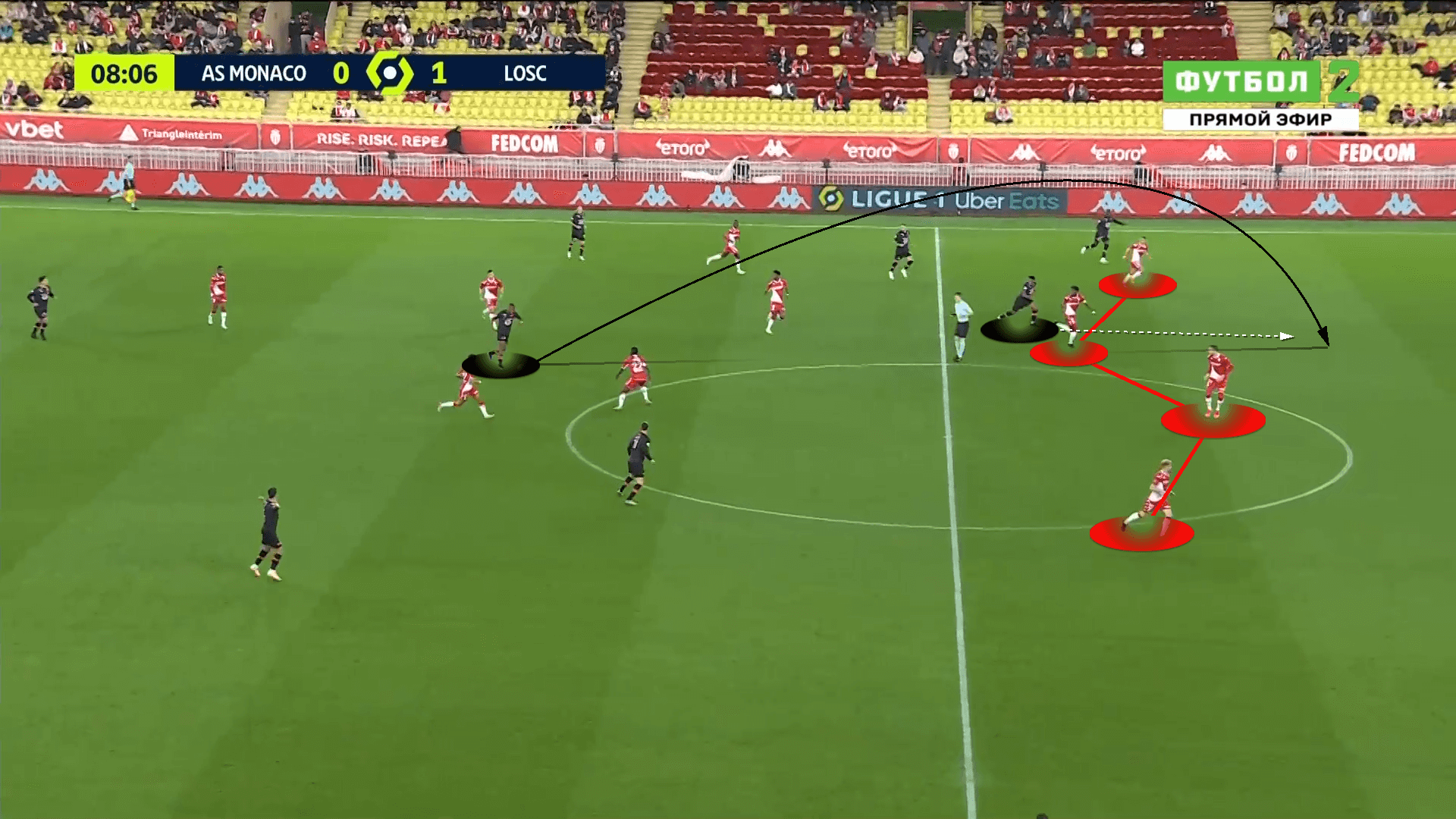 Regardless of snatching a goal just before the halftime interval or the second half adjustments regarding tactics.  Monaco suffered during long periods of this match against Lille and matters took a greater turn in the wrong direction as Strahinja Pavlović picked up his second caution and was sent off while his team was trailing 2-1. With all that went against Monaco during the final passages of the play, they demonstrated great mental strength and fortitude as the battle through pressure presented by Lille. With their grit and determination, Monaco was able to snatch a draw thanks to late substitute Wissam Ben Yedder finding the back of the net.

The final goal came through Ben Yedder’s fantastic timing within the penalty area. The former Sevilla striker held his line perfectly and was able to place the ball at the goalkeeper’s front post. 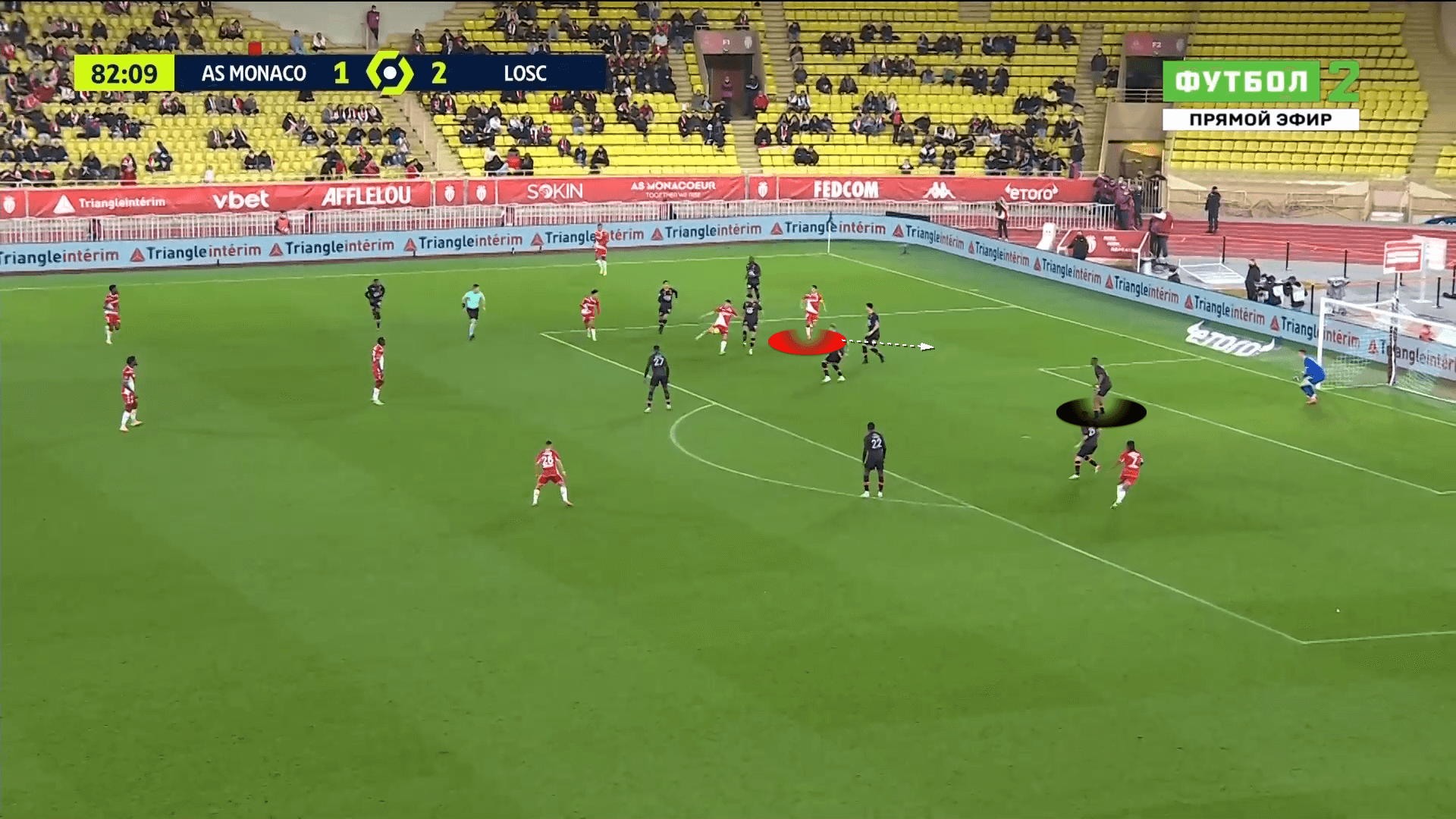 With two teams that have seen success in the last couple of years, both Lille and Monaco have not had the best of starts during the 20/21 Ligue 1 season, so this encounter between these teams just after the international break made for an interesting tactical matchup. Lille showcased their supremacy as their rotations and positional play paid severe dividends. Monaco on the other hand deviated from their tactical norm, and poor decisions from a managerial and player standpoint cost them from laying down a marker at home. With their backs against the wall, Monaco did well to leave with a point and Ben Yedder showed his class.