Lucas Paqueta at Copa America 2021: how the reborn Lyon midfielder has become the best partner for Neymar – scout report

For all the Rossoneri fans it must be frustrating watching Lucas Paquetá now. The 23-year-old Brazilian midfielder, who only registered one goal and three assists in his 44 appearances for AC Milan, has had a fantastic season with Lyon which earned him a place with his national team in the Copa America 2021.

Despite not playing every match on the group stage, Paquetá enjoyed quality minutes is now one of the most in-form Brazilian players going into the final against Argentina. He has contributed with one goal in each knock-out stage and reaches the decisive match of the Copa América full of confidence.

In this tactical analysis, we’ll look at his role in the Brazilian tactics, his contribution in front of the goal and his partnership with Neymar.

Paquetá is a left-footed offensive midfielder who stands at 180 cm / 5’11’’. Despite being more talented than physical, he still has a good frame that helps him when shielding the ball and he’s powerful in the first meters, being capable of dribbling and driving the ball through the rival defence. He’s dynamic in short distances and likes to pass and move but doesn’t make very long efforts to run in behind from midfield.

Being an attacking midfielder in the Brazil squad, we can easily imagine some of the characteristics Paquetá has. He’s very talented, technically gifted and creative to do the unexpected. He’s also extremely pleasing to watch thanks to his wide technical repertoire and willingness to show his talent.

Regarding his role in Brazil’s tactics, Paquetá can play in different positions in the 4-2-3-1 or 4-3-3 Brazil use. He can be part of the double pivot, taking responsibility to progress from the back and getting a lot on the ball or play slightly higher, be it as a right central midfielder or as a 10, moving between the lines to receive the ball, drifting wide to let the winger run in behind and get more central and using his passing ability to create chances from there.

In a deeper role against Colombia, Paquetá attempted 75 passes per 90 and completed 97% of them. He was in charge of distribution and getting the ball into the final third instead of trying to create chances. Against Peru and in a more advanced role, he just had 45 passes per 90 and completed a much lower 84% of them but he registered 0.26 xG and 0.64 xA, both stats being zero in the match against Colombia.

His ability to break lines and create dangerous situations is quickly understood when looking at his stats. Paquetá is fourth in through passes per 90 with 2.02 (right above Lionel Messi) and second in the accuracy of those passes with 42.86% (only behind Neymar). He also stands third in key passes with 1.44 per 90, only behind Messi and Neymar. All this translates into 0.62 expected goal contributions per 90, the seventh-highest in the Copa América. 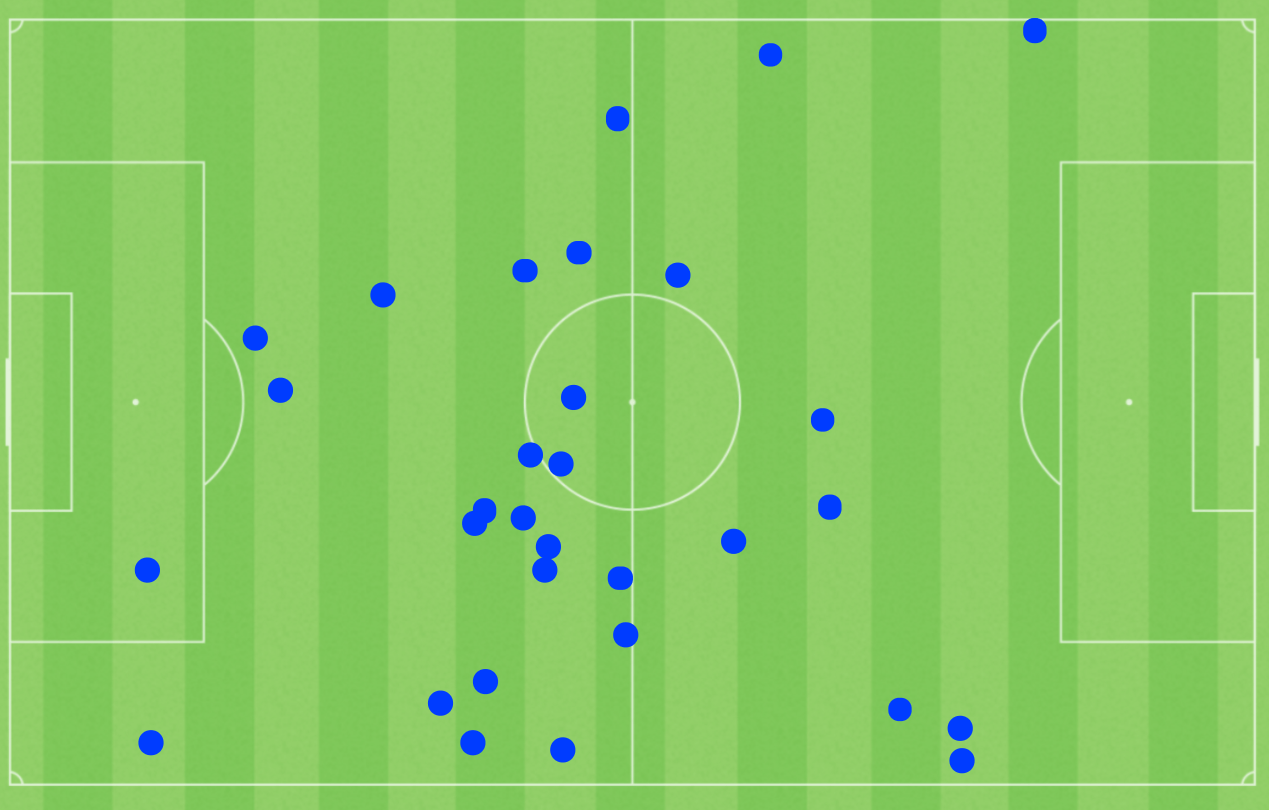 In the following sections of this scout report, we’ll analyze further how Paquetá progresses, creates and scores chances for Brazil.

Given Paquetá’s skill set, he plays an important role when Brazil try to progress into the final third, both as the target of the passes when positioned between the lines and as the creative force that can make that progression happen.

Despite being capable of playing on either side, Paquetá’s favourite position is in the right half-space, with some space to cut inside to his strong left foot and play forward passes but also freeing the right-winger to get central and attack the ball or run in behind.

Paquetá likes to receive the ball at his feet and create instead of being dynamic to generate spaces and run into them. His movements are usually short but intense and he excels in quick combinations that create chaos in the rival defensive lines. This ability to combine in tight spaces is the main reason why he’s been the best partner for Neymar in the tournament as the PSG star also loves to advance with creative and high-quality short passes in small pockets of space.

Let’s see some examples of how Paquetá can combine with his teammates to advance through the centre even against low and compact blocks.

In the picture below, Paquetá receives a pass from Casemiro in midfield and with his back to the goal. Casemiro runs from the midfield circle after making the pass and Paquetá breaks the Peruvian midfield line with a nice first-touch backheel pass that catches his rival completely off guard. Casemiro then faces the defensive line in a very good situation to assist the striker. 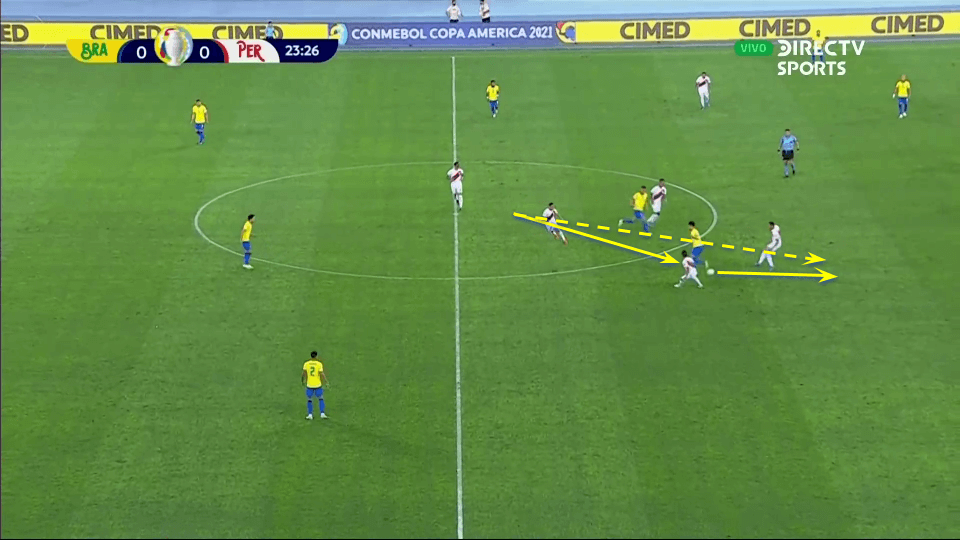 The following section is perfect to understand his creativity and his relation with Neymar. It became viral as one of the best plays in the tournament so far. With five passes in four seconds, Neymar and Paquetá play through the rival midfield line and Neymar ends up running at the defensive line. Paquetá makes the first and last pass in this combination and his understanding with Neymar is excellent. 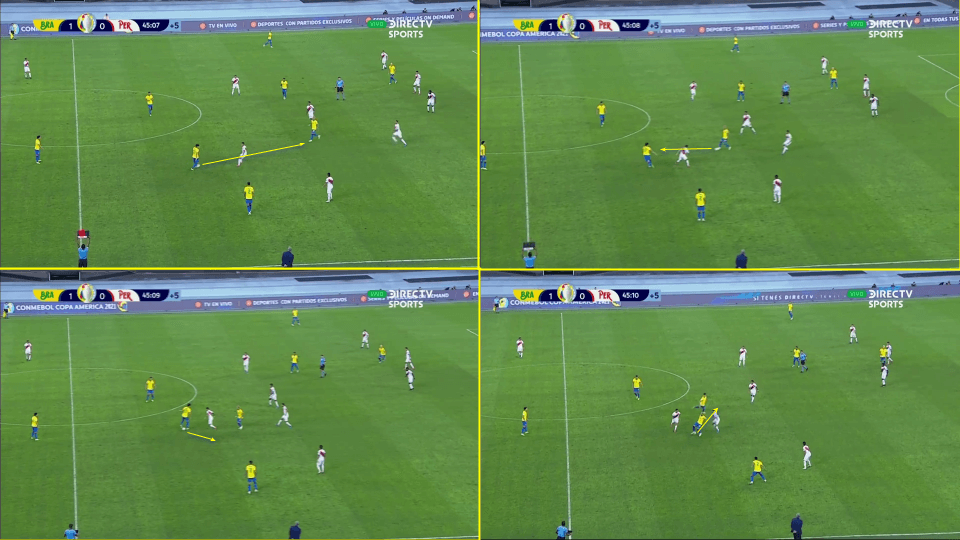 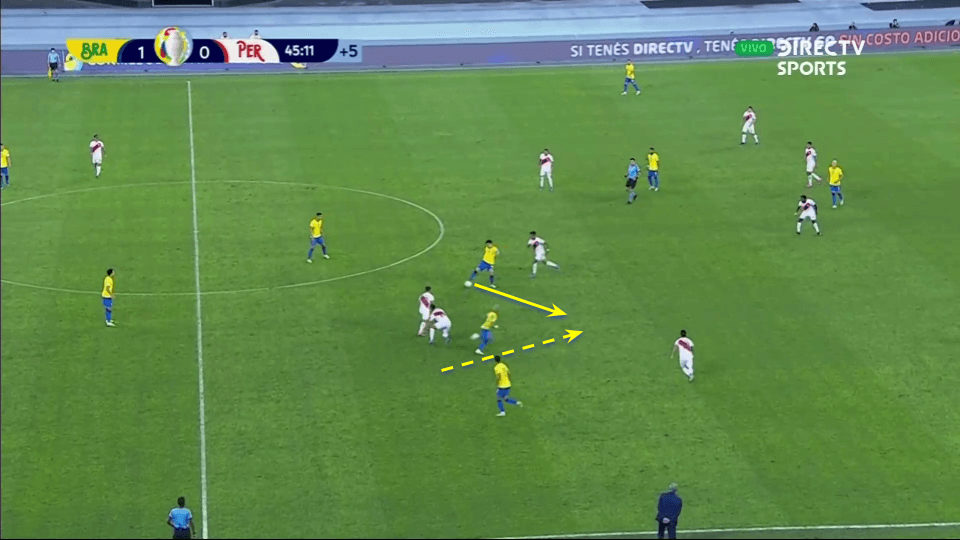 An important part of Paquetá’s ability to progress using quick combinations is his understanding of how to attract pressure and his timing to release the ball in the very last moment before being dispossessed. His backheel passes aren’t always just a fancy trick but a way to make the rival believe they can get the ball before making an unexpected pass.

He also uses his body very well to shield the ball and create time for his teammates to move before he passes them the ball. With a great combination of physicality and technique, he’s very comfortable holding the ball with his back to the goal and again is creative to make surprising passes and moves to get his teammates into the best possible situations.

Below there’s an example of what’s just been mentioned. Paquetá is shielding the ball on the right side of the pitch with a rival intensely pressing him. Anyway, he stays calm and creates time for a teammate to overlap him before passing the ball into space with his heel. Like in the defensive duels, his use of his hips and upper body is excellent here. 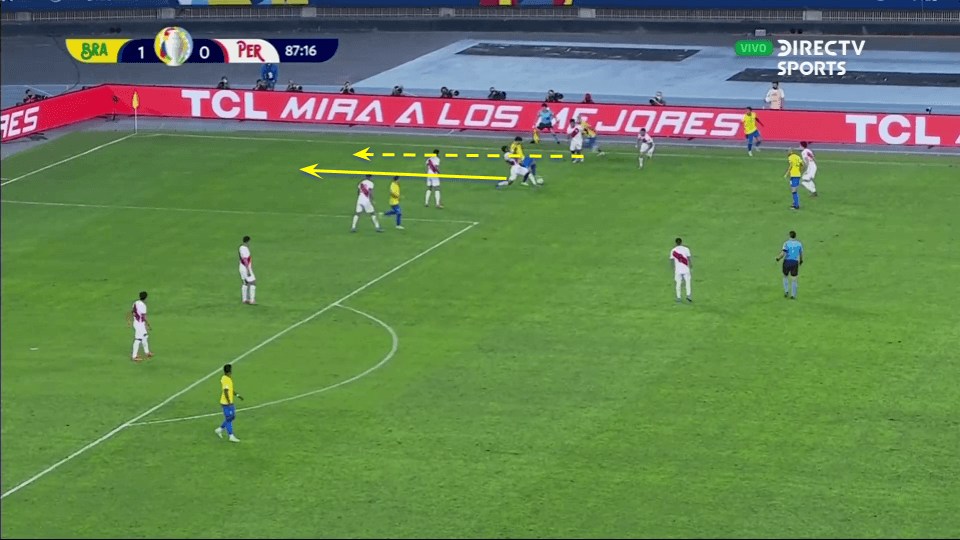 Finally, Paquetá is also a competent dribbler. With his technical quality and his power in the first meters, he can leave a rival behind and escape pressure. He’s not someone who will go on slalom and get past several rivals but he still has the ability to beat one defender and get into a better position if there aren’t any good passing options around him. 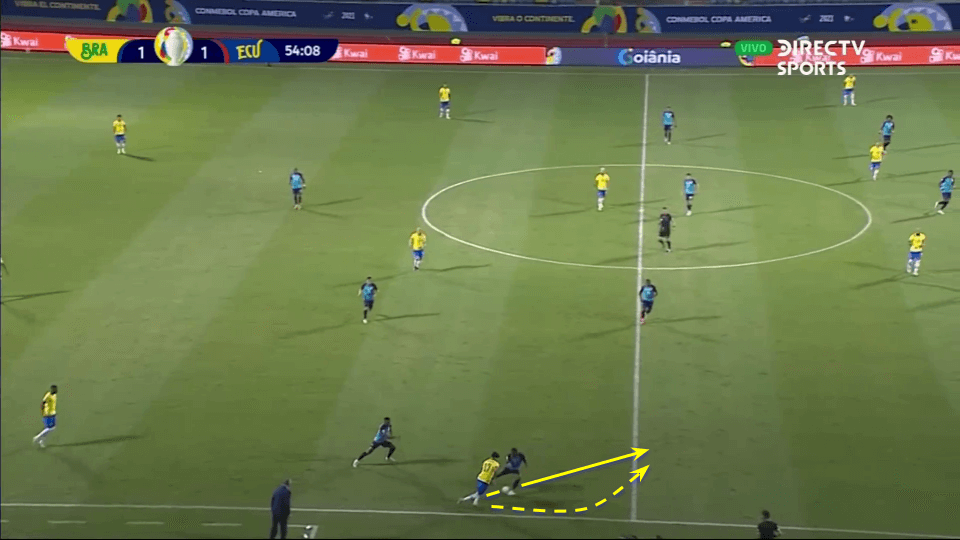 The above picture is a good example. Pressed by the touchline and with no clear passing options, Paquetá takes advantage of the space behind the rival and gets past him with a great nutmeg and using his acceleration.

Apart from his understanding with Neymar and personality to take the ball in difficult moments, Paquetá has stood out in the Copa América for his creativity in the final third to produce goals and assists. We’ve already mentioned that he has 0.62 expected goal contributions per 90 so far, the seventh-highest in the Copa América, and in this section of the tactical analysis, we’ll see how he creates chances for himself and his teammates.

Playin on the right side of the pitch, be it wide or more centrally, Paquetá has a wide range of passes he can use to get his teammates into scoring positions. He has created chances from through passes, lobbed passes over the defensive line, long passes from his own half and also from low crosses when he approaches the goal line.

Below, we can see all of Paquetá’s key passes in the tournament so far. Most of them are concentrated in the right half-space near the box but he has also created from crosses from both sides and long passes and he’s a great creative force with movement in front of him. 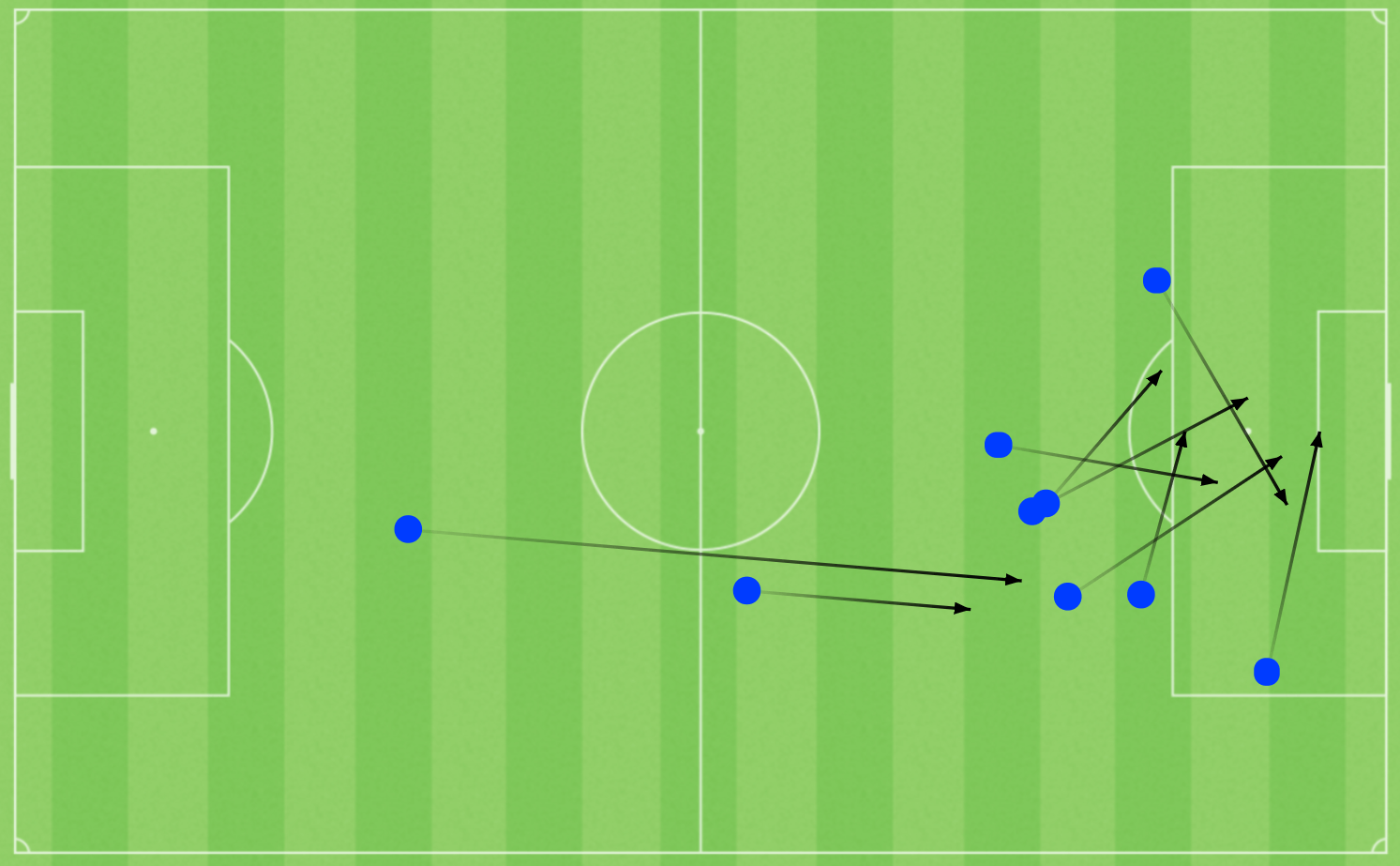 Let’s review some of these passes to see how creative and skilled he is to create goals. In the first picture below, Paquetá receives in his favourite position and quickly cuts inside to his left foot. With Richarlison making a great run between the rival centre-backs, he puts an excellent through ball and creates a great chance. 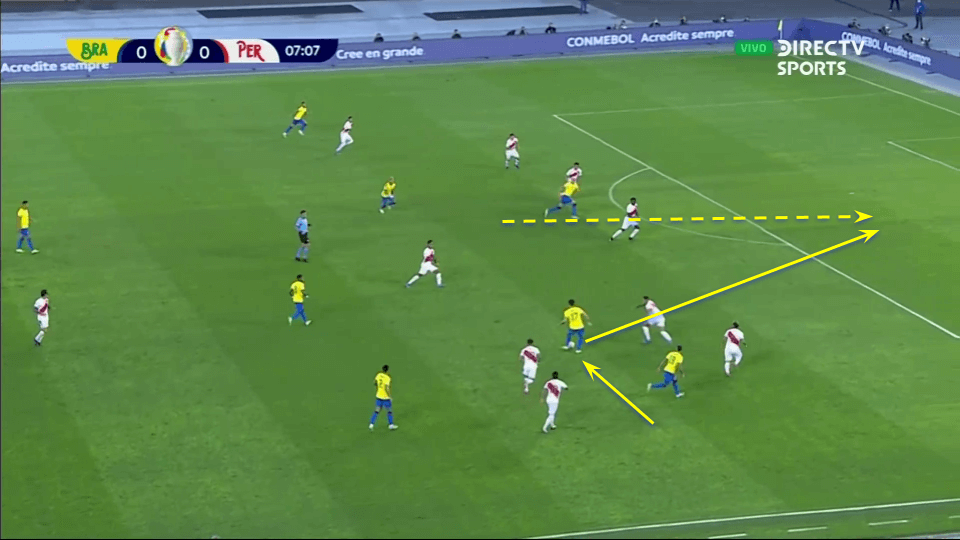 In this second example, Paquetá appears in a winger position and receives a good pass. He lets the ball run across him and raises his head to check the box, putting a great low cross with his right foot into Neymar’s run. 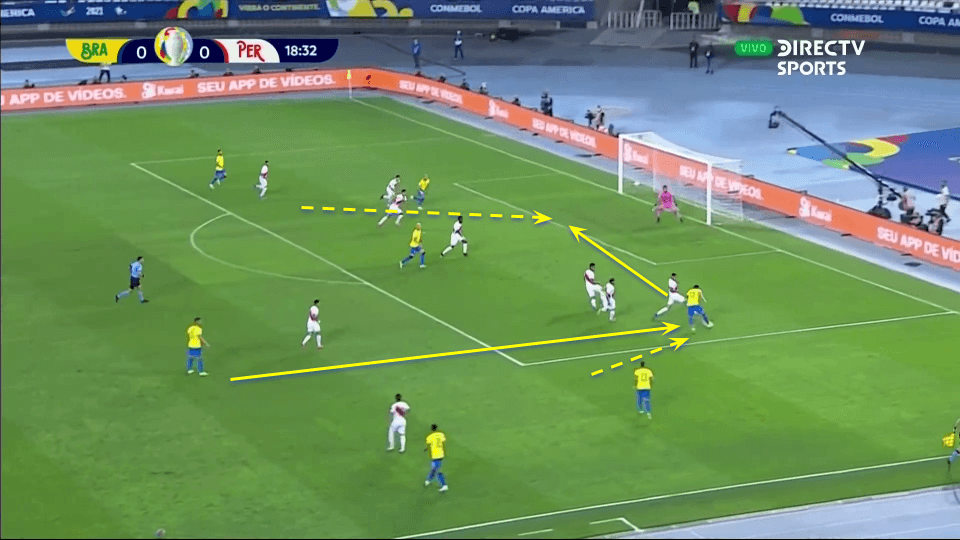 As the last example of Paquetá’s vision and quality, we have the play below. Again at the edge of the box but with a body position that invites the rivals to press him, he invents a lobbed pass over the defensive line with the outside of his left foot to put Gabigol in a perfect situation to score. Apart from the technical difficulty, this pass is almost impossible to anticipate as he’s not even in a good position to play it. 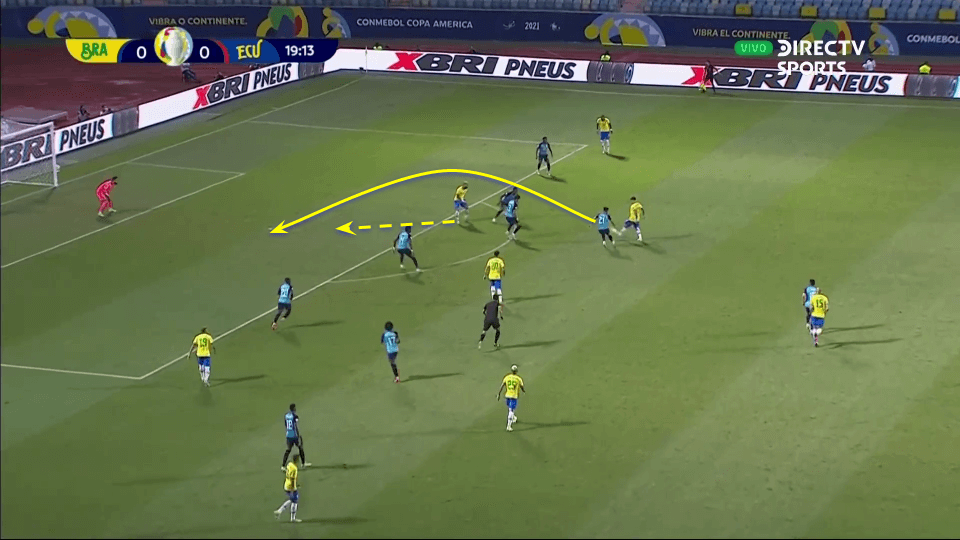 When he doesn’t get the ball near the box to create from there, Paquetá still follows the attacks and is also a scoring threat.

He doesn’t have the dynamism to get into the box in transitions or after long runs but is intelligent to find free space and times his runs very well to create separation and space to shoot. With two goals so far in the tournament, he’s been one of the main weapons Brazil have had to change difficult matches.

A good example of how he gets into scouting positions can be seen below. Joining the Brazilian attack from midfield, Paquetá lets the rival defender get in front of him before changing the direction of his run and getting to the penalty spot. he creates the separation he needs to tap in Neymar’s pass and put Brazil in front. 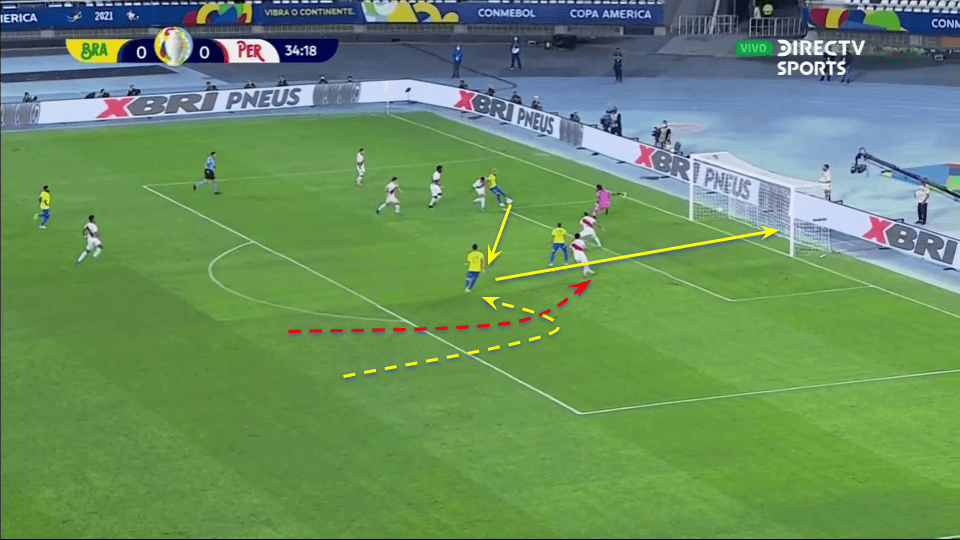 It has always been obvious that Paquetá is a talented player. His performances in Brazil earned him a move to Milan in the Serie A when he was just 21 for 38.4 million euros but his performances in Italy were far from what he had shown in Brazil and Milan decided to sell him to Lyon in the Ligue 1 last summer for around half of what they paid in 2019.

In France, Paquetá has recovered the great level he had shown not long before, scoring ten goals and assisting another six in 34 appearances for Lyon this season. Now in the Copa América, he has become one of the best players of the tournament so far and his partnership with Neymar is one of the most productive in the tournament. With teams like Real Madrid following him, the final will be the final challenge for the reborn midfielder in his quest to fulfilling his huge potential.