Lina Hurtig has been one of Sweden’s best attacking players during the last two seasons based on her performances both at Juventus Women and at the national Swedish team. Before joining Juventus in 2020, Hurtig played for a number of Swedish teams since the age of 15. Her first experience started with Gustafs GoIF where she scored 14 goals and made four assists in 20 games. Such performances granted her a move to a bigger team like Umeå IK with which she stayed for a bit more than four seasons and scored 24 goals in 88 games.

Following the team’s relegation from Damallsvenskan, Hurtig joined one of the most successful Swedish clubs, Linköping, a team at which Hurtig improved her skills even further and showcased her talent in the best of ways, attracting the interest of numerous European teams like Juventus after winning the Damallsvenskan title in 2017 and putting on some excellent performances from 2017 to 2020.

Hurtig started getting playing time in a non-consistent manner at Juventus under Rita Guarino during the initial period at the Serie A club, but then, she started convincing everyone with her skills and the addition she provides in the attacking phase. Therefore, she earned almost a starting spot in the team’s line-up and even when she didn’t start games, she was always subbed in during the second-half to provide some extra attacking depth. She lifted the 2021’s Serie A Women title with Juventus and now she looks forward to reaching an advanced stage with her team in the UEFA Women’s Champions League under the management of Joe Montemurro.

Hurtig’s contribution for her national team has been already excellent, given that her international journey started with the Swedish Under-17 team in 2011, before lifting the UEFA Women’s Under-19 Championship in 2012 with the Swedish Under-19 team. Later in 2014, she was called to represent the Swedish senior women’s team with which she participated in the 2019 FIFA Women’s World Cup and won the bronze medal before finishing as runners-up during the 2020 Summer Olympics.

In this tactical analysis article, we will highlight Hurtig’s main skills, strengths and attacking characteristics that are allowing her to shine both at Juventus and with the Swedish national team. The scout report will also include an analysis of the player’s goalscoring style and her various attacking roles.

Hurtig can play different attacking roles as she became experienced in starting games with various positions and therefore distinct roles as well. For instance, she is actually Sweden’s striker, a position that suits her physical characteristics perfectly since she has a good height of 1.80 meters. Playing as a striker allows Hurtig to be more central and get involved in duels with centre-backs either to win the ball for herself or to provide passes for the players coming from behind and therefore serve as a “station”.

Moreover, such close position to the goal gives Hurtig the ability to exploit her finishing skills perfectly as she often gets opportunities for shooting from inside the box when being a striker. Plus, most crosses are played towards the middle where the striker is always waiting for the ball, and therefore, her height is exploited when receiving crosses and attempting headers towards the goal. Hurtig’s statistics in this regard are good overall, with 54% of aerial duels won, 45,3% duels won, and 38% offensive duels won. That being said, Hurtig can improve her averages even further if she wants to become a more clinical player inside the penalty area.

At Juventus, Hurtig was tried as a striker during some games but then she was employed as a left-winger by Guarino. This position was further confirmed under Joe Montemurro who has been constantly using Hurtig as a left-winger, a position which is not strange to the player who used to play according to this plan even during her spell at Linköping.

Unlike the striker position, playing as a left-winger involves more running and more defensive duties compared to strikers. Therefore, Hurtig is obliged to defend more and retreat more, as you can see in this heatmap.

At the same time, the Swedish international often tries to advance on the wing and cross for her teammate when being a left-winger since she is not necessarily asked to score goals but rather to provide support to one of the playing strikers, Cristiana Girelli or Andrea Stašková. Both of these players have an advantage on Hurtig for the striker spot and that’s why Montemurro opted for using Hurtig on the left-wing in order to exploit her physical and technical strengths, knowing that the player can be very helpful in attack for his Juventus.

And until now, his tactical plans proved to be successful since Juventus are actually at the top of Serie A as they have qualified to the UEFA Women’s Champions League Quarter-finals with Bayern Munich, Paris-Saint Germain, Barcelona, Real Madrid, Arsenal, Lyon and Wolfsburg.

In terms of goalscoring, Hurtig has been one of Serie A’s best attacking players this season. She had 49,2% shots on target with an xG of 0,36. It is true that this number can be improved, but, we have to consider that she is not playing as a striker actually and that she is not getting 90 minutes per match regularly. Nevertheless, this 2021/2022 can be one of Hurtig’s best seasons in terms of number of goals and assists if she continues her great run of form and avoids injuries until the end of the season. 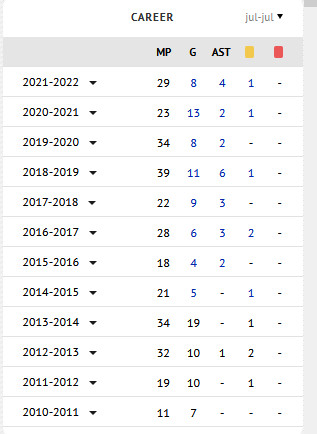 As you can see above, Hurtig is already about to reach her previous seasons’ numbers even though we are still in the first half of the 2021/2022. This would mean that Hurtig is able to double her numbers this season if she continues to get regular playing time at Juventus and Sweden. More importantly, the qualification of Juventus to an advanced stage of the UEFA Women’s Champions League knockout phase will be fundamental for Hurtig in terms of matches played and goals scored. And let’s not forget that this summer will also include the UEFA Women’s Euro 2022, a competition in which Sweden and Hurtig will be surely present.

Hurtig can be extremely important in aerial duels since she knows how to get rid of marking and direct her headers with great precision towards the desired angle. She has already scored many goals in this manner and perhaps one of the most recent and excellent goals is the one scored against the United States in the 2020 Olympics. 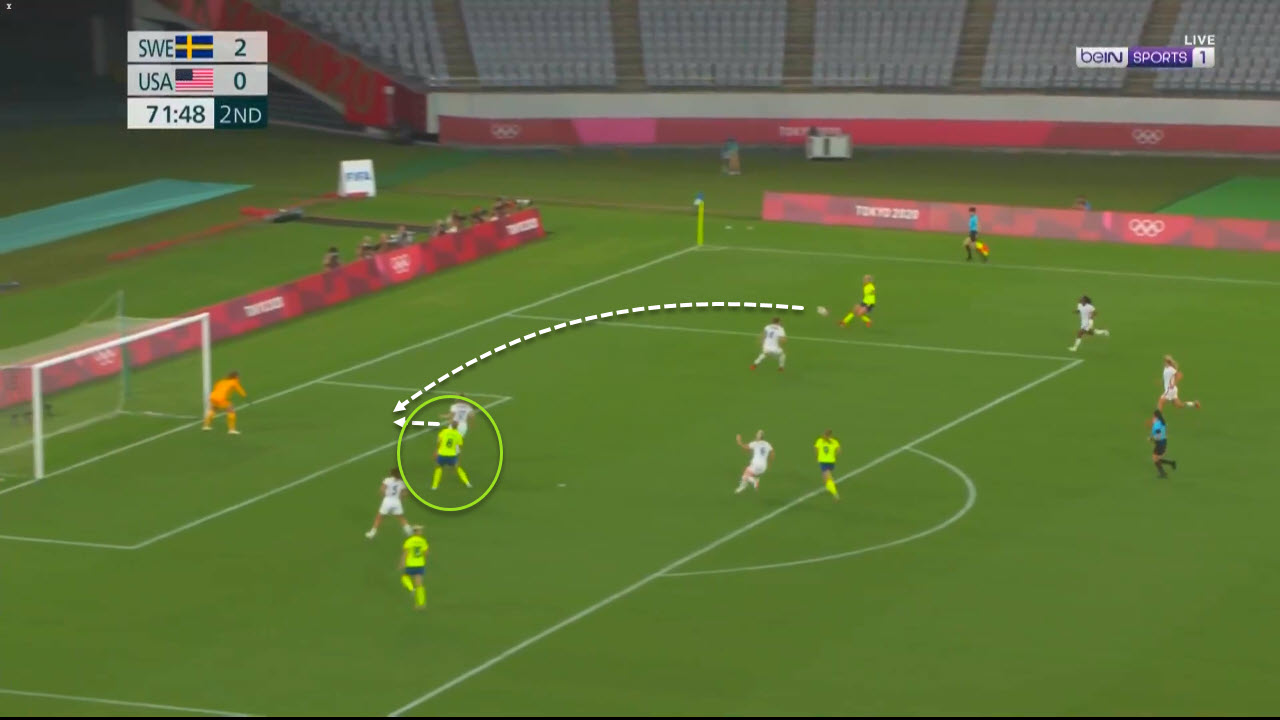 Moreover, Hurtig knows how to exploit crosses in the best of ways by asking for the ball and running immediately to meet the ball at the right spot while getting rid of marking. In this regard, a player who constantly asks for the ball should know how to deal with the various situations when receiving the ball under pressing from defenders. Hurtig is very good in making her finishing decision and in choosing how to shoot and towards which angle. The quickness of such decisions and intelligence involved in order to make a decision while running to meet the ball is what makes Hurtig a great goalscorer. 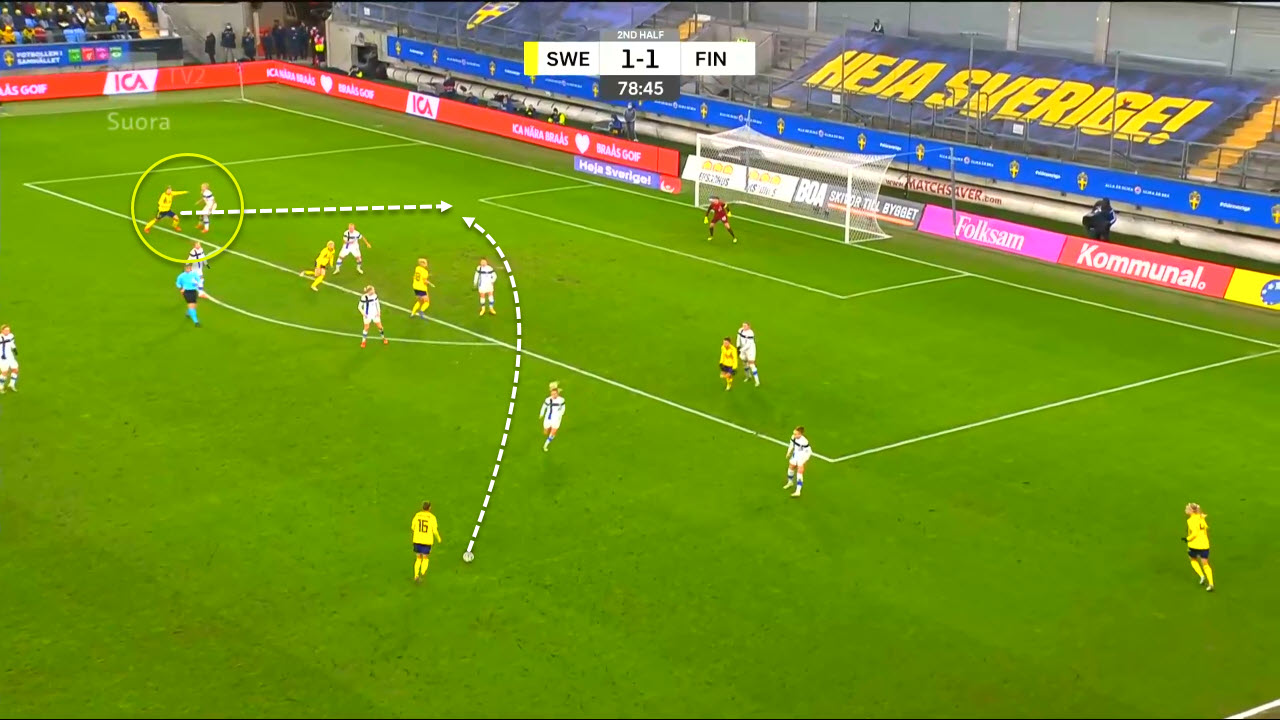 For example, in the above action, Hurtig opted for a volley because she was tightly marked despite asking for the ball in an advanced position. Taking the volley decision while she still didn’t reach that spot enabled her to coordinate her body correctly in order to shoot with power and convinction as soon as she reached the desired spot. 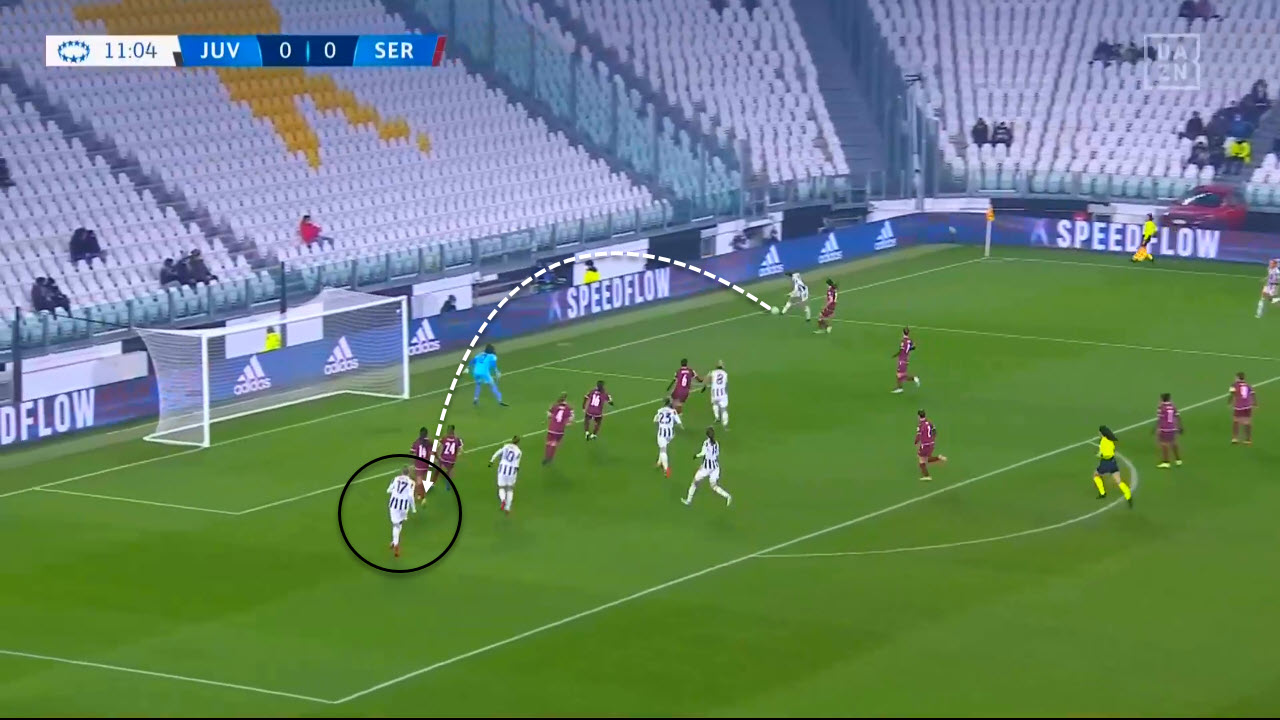 Hurtig can also escape from marking by positioning herself on the far post on purpose in order to act like she is not intending to participate in the action. This can sometimes leave her with no defenders close to her especially when these players do not expect a long cross from Hurtig’s teammates. But when such crosses reach Hurtig, the latter often exploits such opportunities with great determination to score. In the following example, she waited for her teammate’s cross and when she saw that it is coming towards her in the far post, she prepared herself for a volley in the last seconds and executed it in an excellent way, scoring Juventus’ first goal of that match.

Although it is not her main role, Hurtig has been excellent lately in terms of playmaking especially when she was employed as a left-winger. She has 76,4% in terms of passing accuracy and she provided four assists this season. It is also expected that the Swedish player would contribute even more in terms of assists.

Hurtig’s ability to cross and provide accurate passes with her weaker foot helped her a lot when playing on the left-wing since her markers often do not expect her to do it. She provided many through passes using her left foot such as in this example in which she was able to cross the ball when being in a complicated position. Yet, she succeeded in providing an accurate cross towards her teammate who was inside the box and who scored the goal. 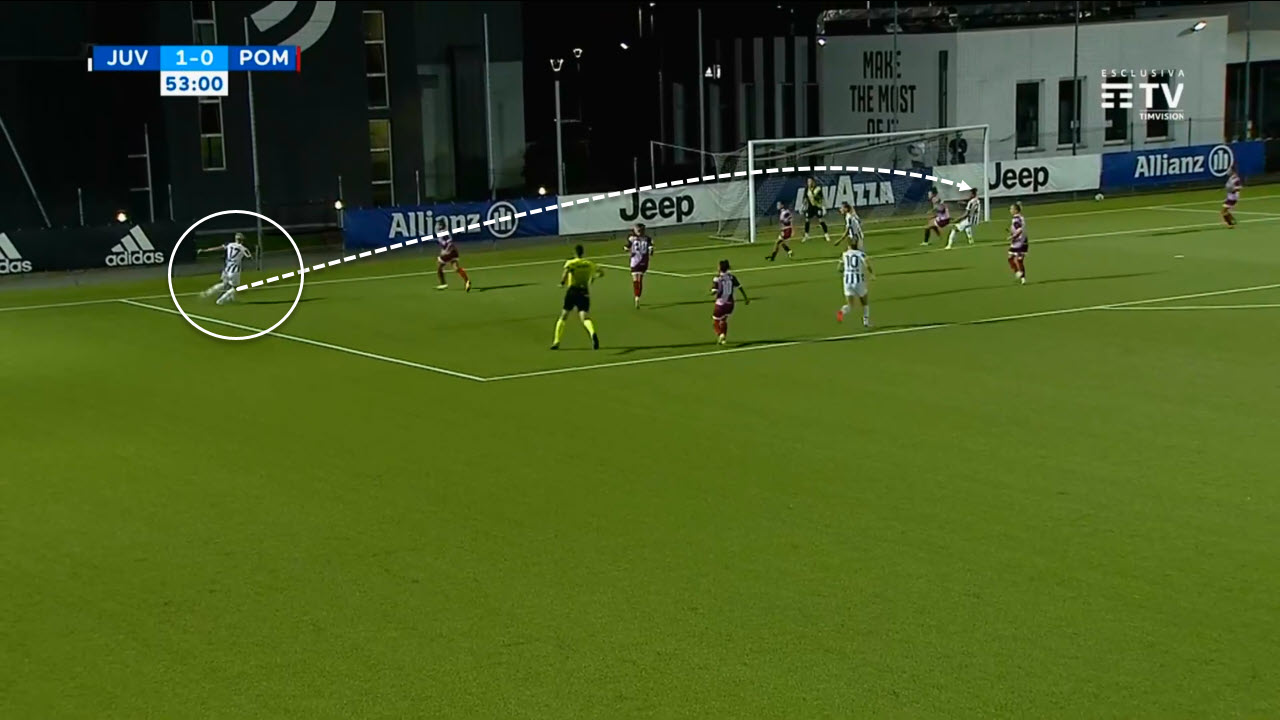 Hurtig provided numerous other key passes and assists from the left-wing mainly using her left foot and not only at Juventus but also with her national team, as you can see below. 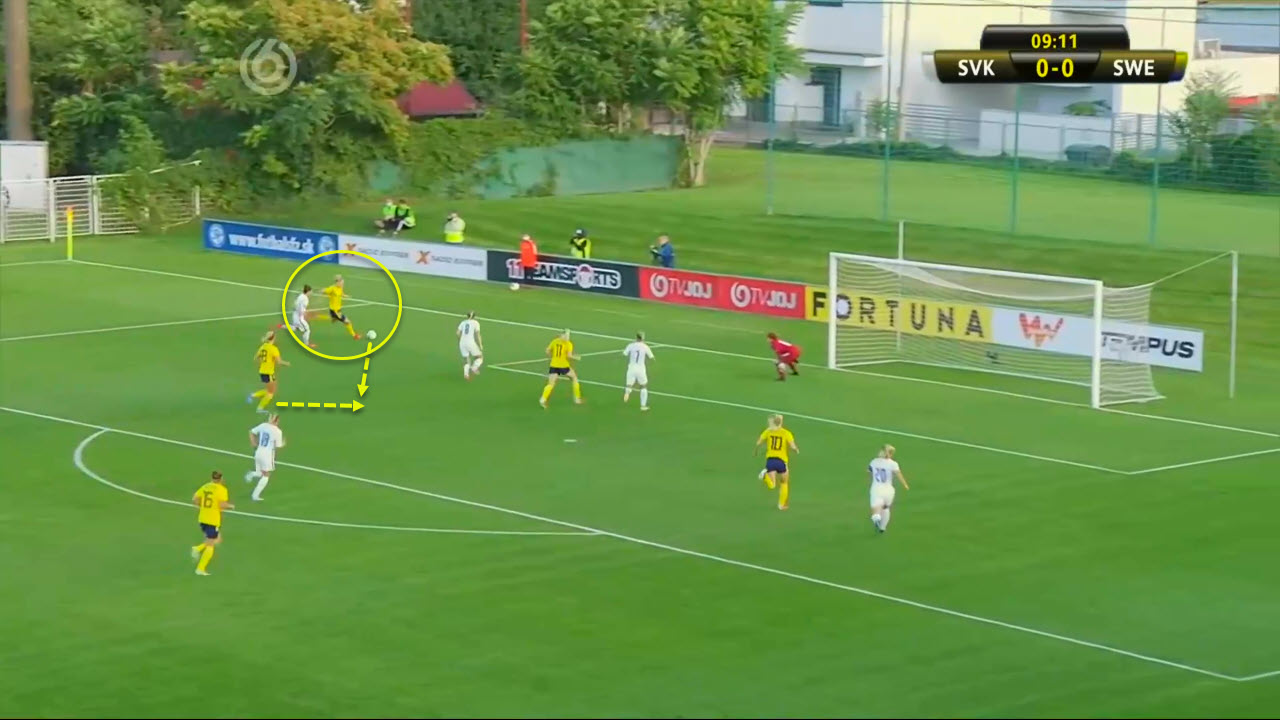 Her assists also include another type of passing which is mainly related to her striker and “station” role. Exploiting her very good height can also be done through assists and mainly headers. That’s why we saw her playing very well with her back towards the goal in order to provide players who are coming from behind with excellent passes, allowing them to shoot without even controlling the ball, such as in this example. 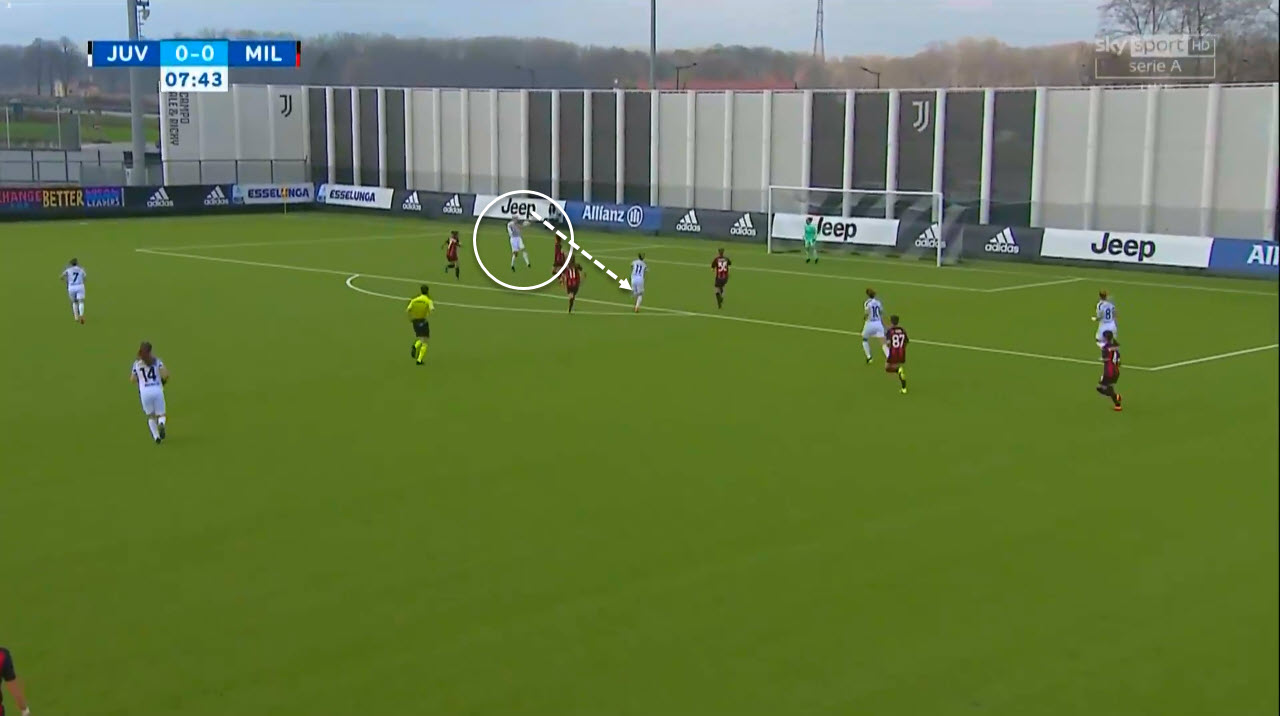 Hurtig is already one of Sweden’s best attacking players and she can improve even further in terms of goalscoring, playmaking and being more clinical overall. She will get the opportunity to shine even further during the UEFA Women’s Euro 2022 in England and perhaps with excellent performances she will get the chance to move to an even bigger European club.