Lorenzo Lucca is a 21-year-old centre-forward currently playing for Pisa in Serie B, having moved over the summer from Palermo. He is also an Italy U21 youth international. Lucca is 2.01m, or 6’7” in height, and is yet to fill out this impressive frame with an almost gangly appearance. Despite this height, he is surprisingly quick over longer distances and moves well in straight lines. Lucca has performed well thus far this season for Pisa. In the 16 league games in which he has featured in, he has scored six goals and made two assists. Pisa also sit at the top of the table with a four-point margin at the time of writing.

This tactical analysis and scout report looks to shine a light on some of the elements of Lucca’s game that have allowed him to play such an important role in Pisa’s promotion surge despite his young age, providing an analysis of some of his key tactics as a player.

Role in build-up and movement

Given Lucca’s frame, it is perhaps unsurprising to hear that he is so often used as a target for Pisa during the possession phase. Lucca will vary his positioning between leading the line and playing on the last man to dropping into much deeper positions where he can provide a forward pass option for teammates in deeper positions. He is good with his feet, and his height shouldn’t have him pigeon-holed as a player who just has the ball hit forward to him aerially. Nevertheless, as we can see from the image shown below, Lucca performs admirably aerially, winning 39.71% of his 6.7 aerial duels. 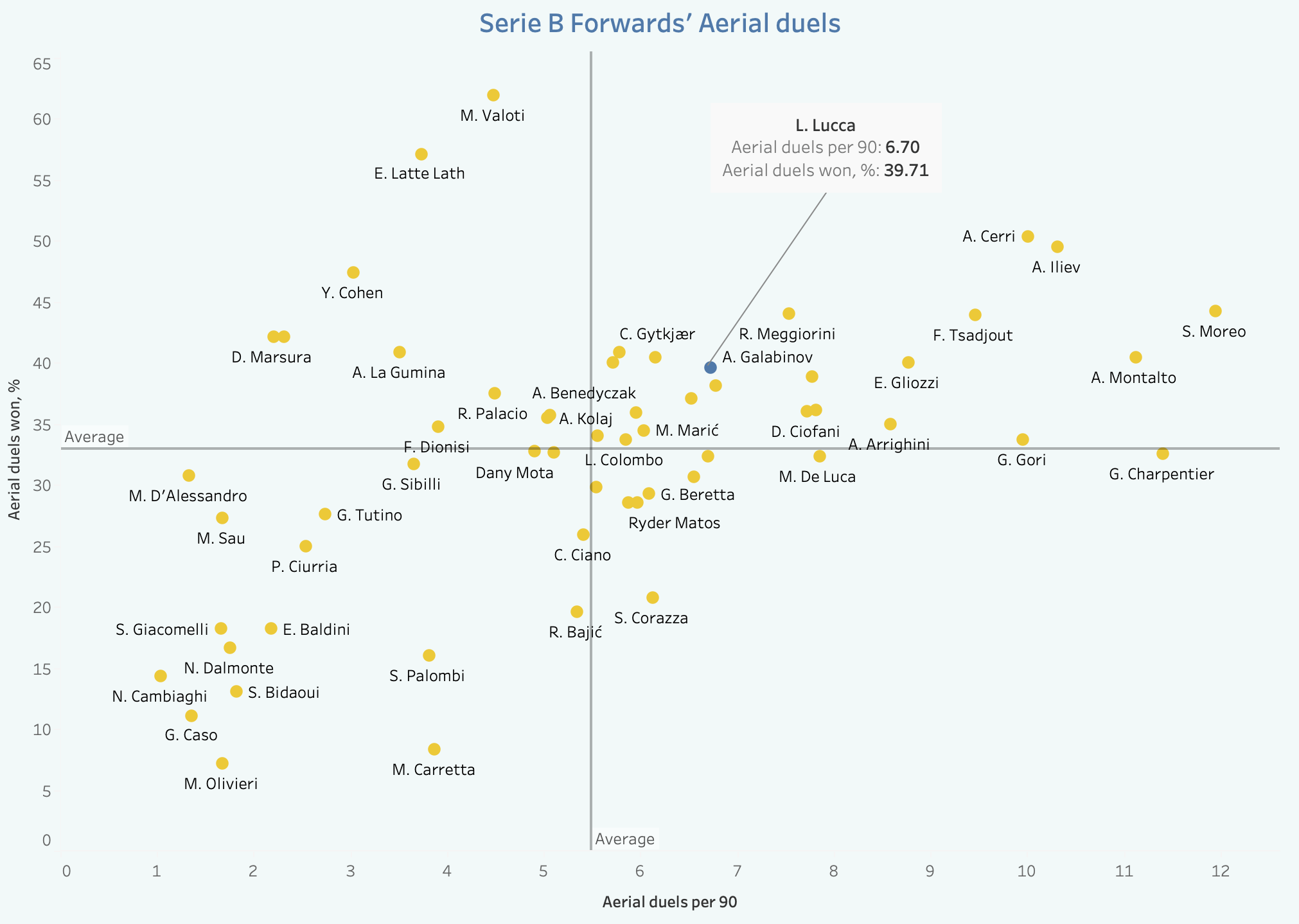 However, he uses his frame particularly well to allow him to cause problems for defenders. This can be whether the ball is played forward on the ground or in the air. Lucca noticeably backs heavily into his marker. If they choose to fight this, rather than backing off, Lucca will simply role the defender, and has surprisingly good speed over a short distance, but more noticeably over longer distances. Regardless, he is nearly always a match for the centre-back for pace, but can often beat them in a foot race too. The following image shows him backing into the defender, before turning on his left shoulder, and moving into the space behind to latch onto the ball played over the top. 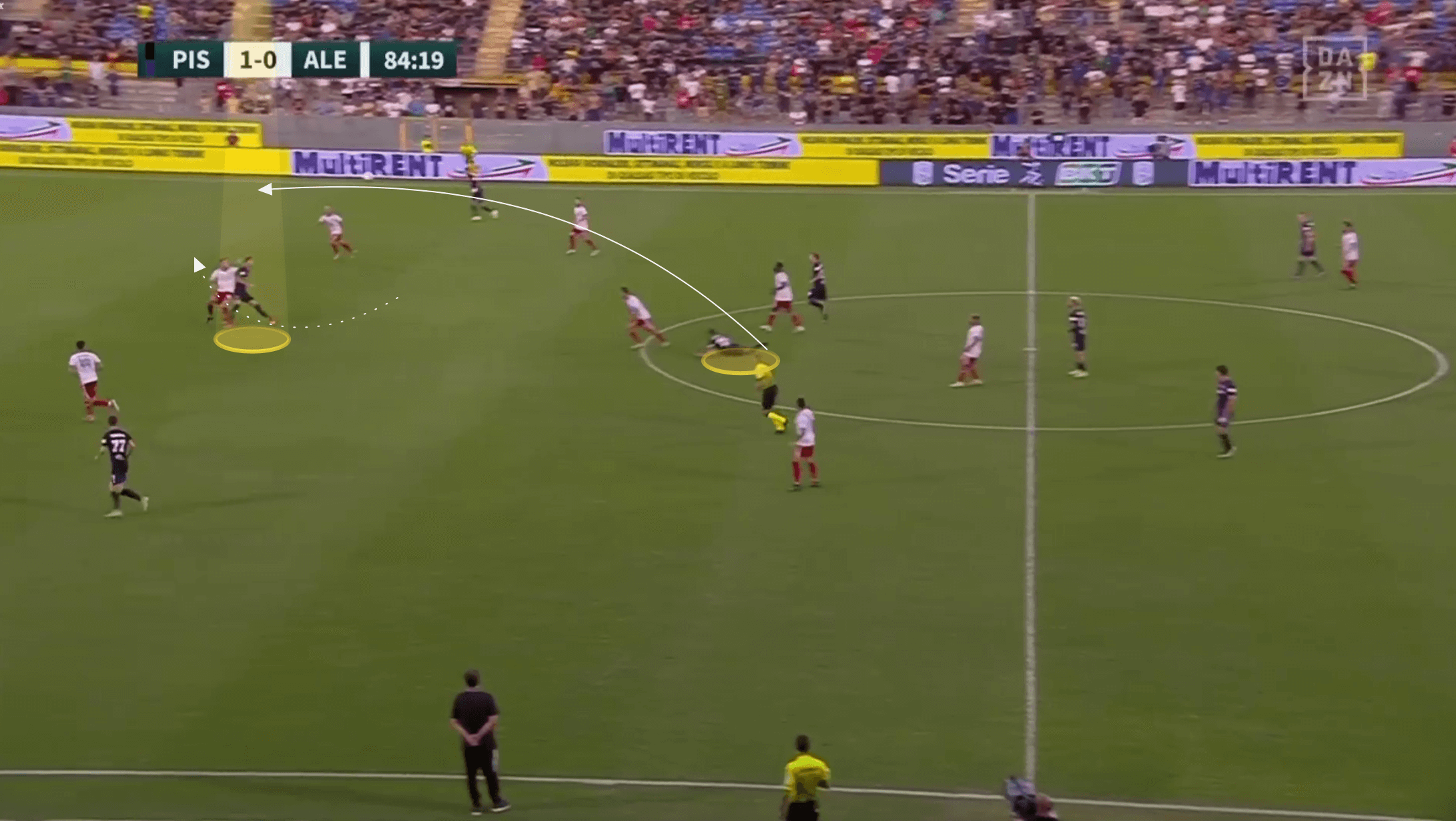 Lucca uses this tactic to create room for himself in the final third as well. He will specifically look to receive the ball to feet in isolation against a defender marking him touch-tight. We can see such a situation in the example shown below. 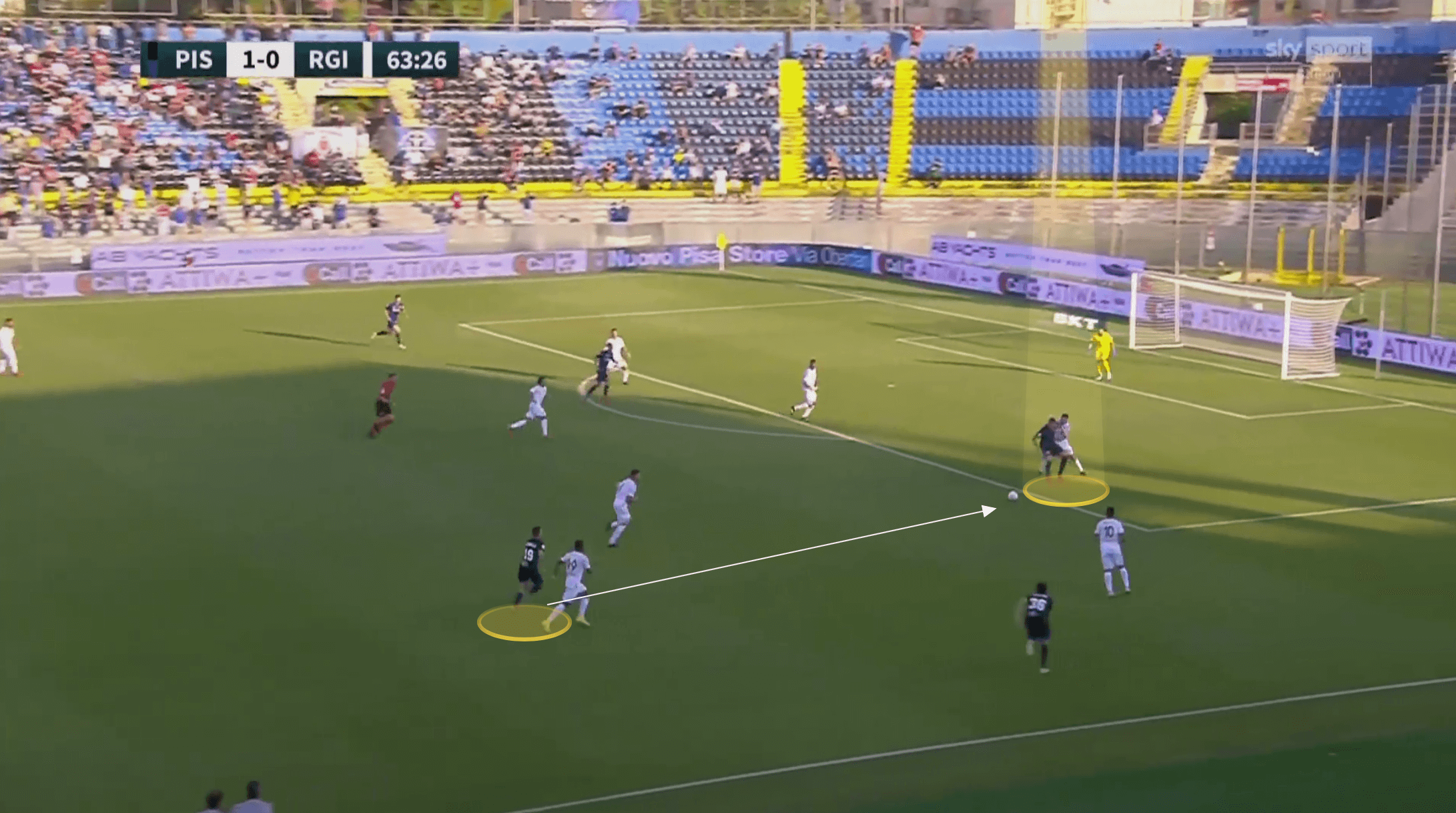 Lucca has the ability to turn either side and is comfortable dribbling with either foot. In the next image, we see him simply turning the defender, using his big frame and long legs to step across the defender, shielding the ball, and allowing him to easily pass them. 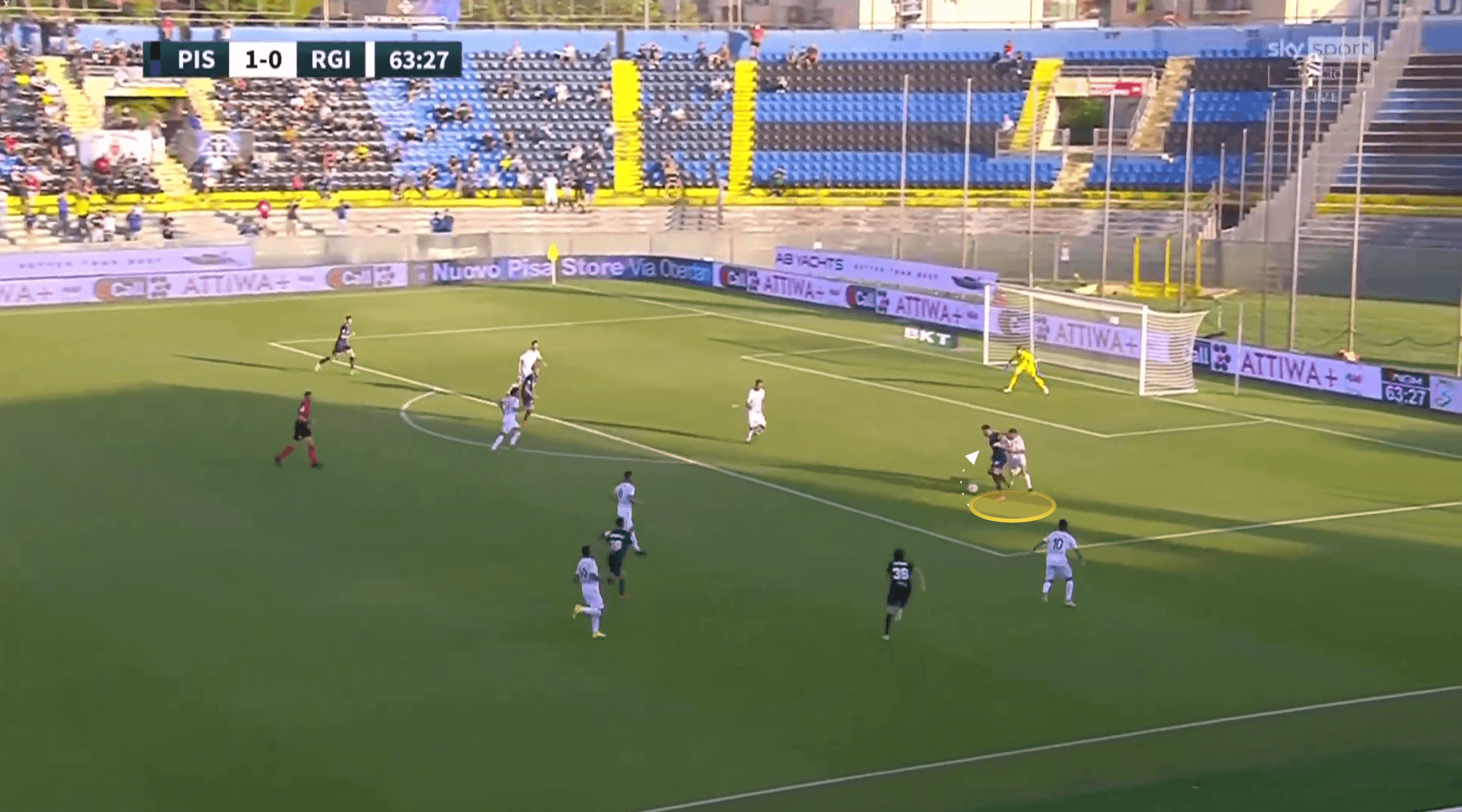 As for his movement to get on the end of through passes or crosses, Lucca firstly has exceptional timing. He doesn’t frequently get caught offside and will often position himself either on the outside shoulder of the far-side centre-back, or in a physical mismatch against the opposition full-back. We can see him using the latter in the next image, as he times his run into the box to get on the end of the through pass. 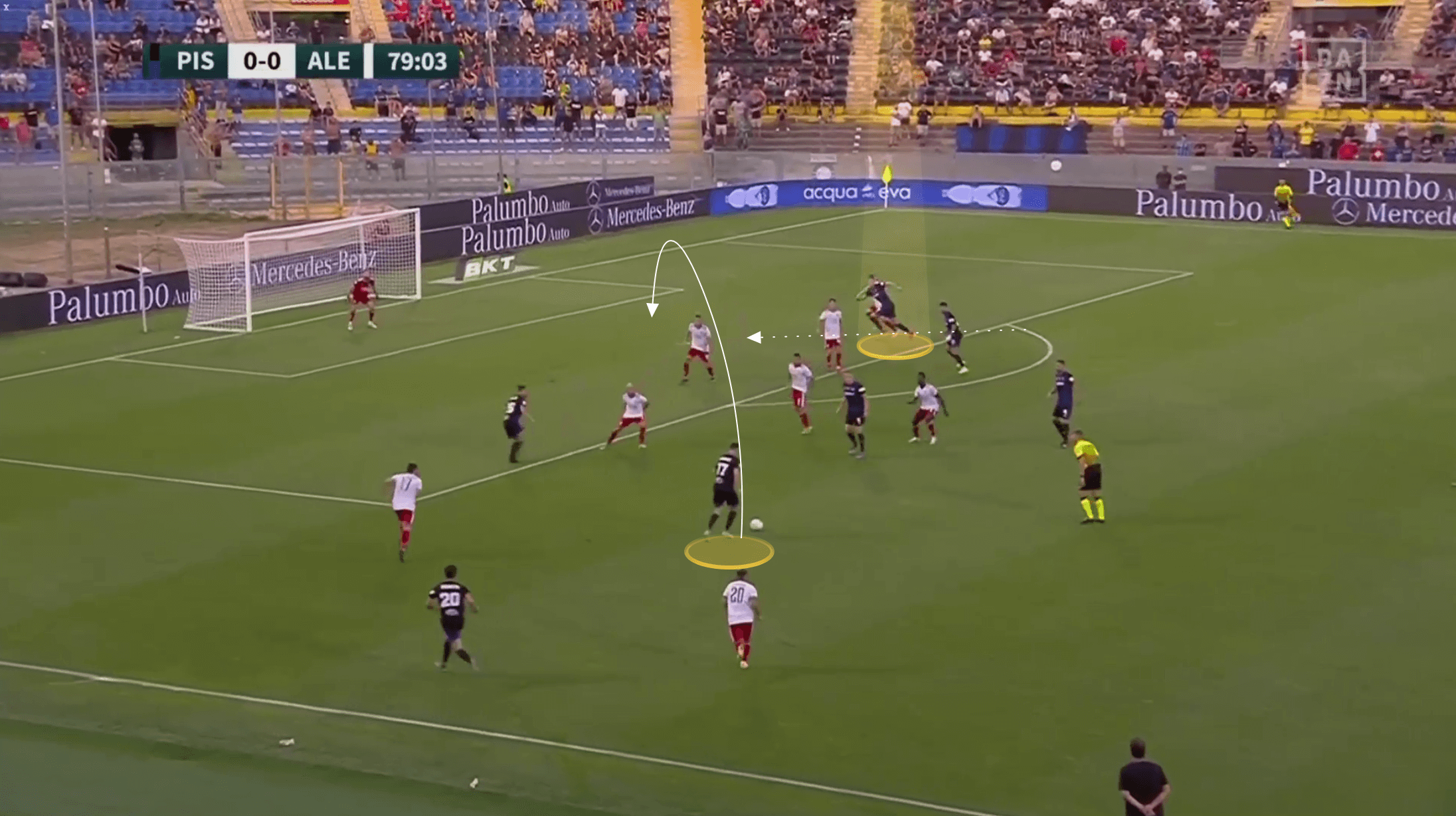 Regardless of where he initially positions himself, Lucca has a habit of moving off the back shoulder of the centre-back. He looks for his teammates to loft passes or hit crosses that are hung, rather than drilled. Given his height, he nearly always has an advantage on these types of crosses. By moving away from the ball it gives him the chance to adjust his run and move towards the ball if it is underhit, or to simply find space and receive the ball when the centre-back has to backtrack in an attempt to head the ball. 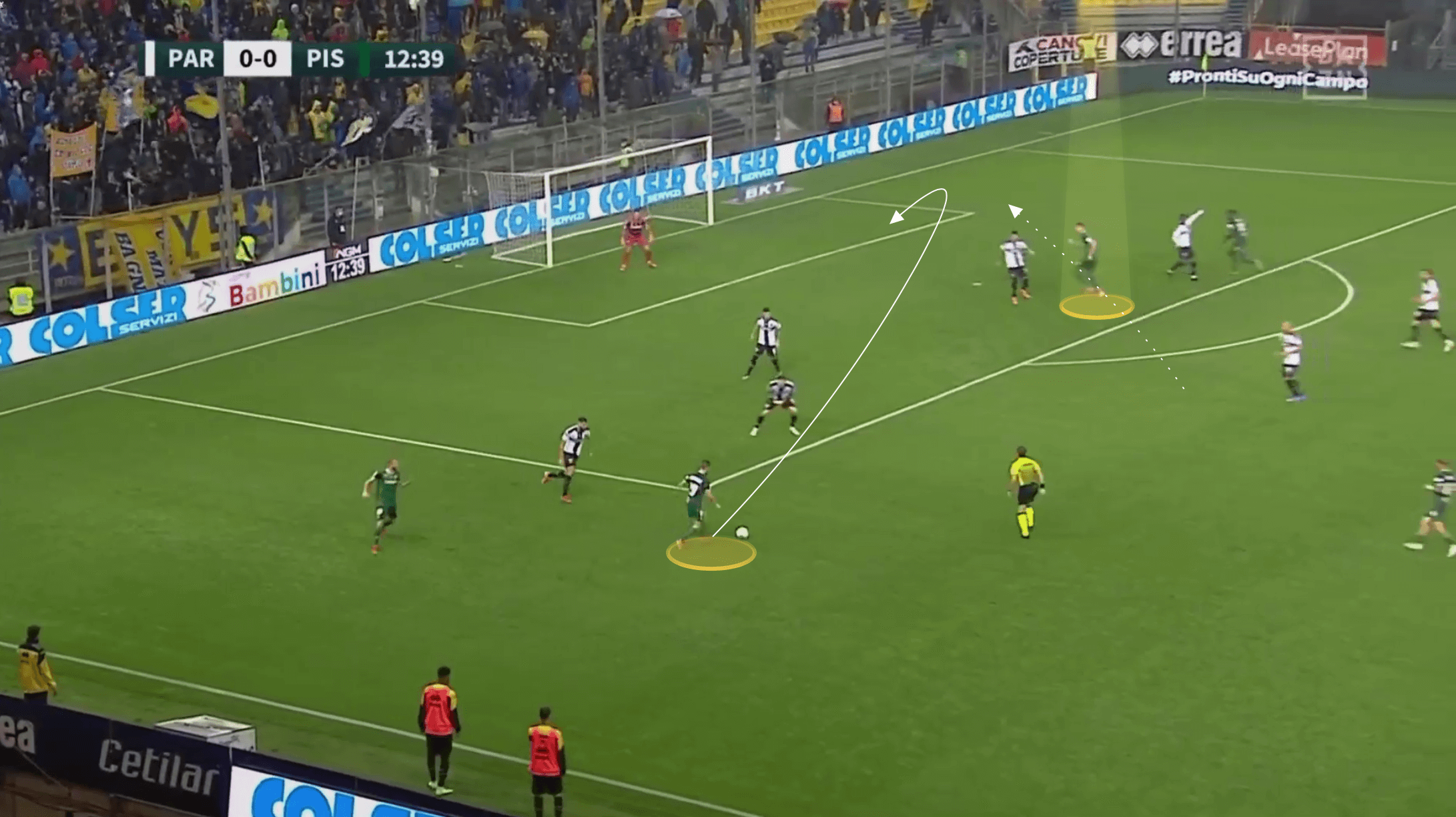 The following graph shows Lucca’s performance this season against other forwards in Serie B, in a number of metrics. Firstly we can see that he has a good xG per 90, ranking above the per 90 average of the league, whilst his total shots per 90 is just above the average. The fact he has a good xG despite this nearly average amount of shots tells us he is taking his shots from good positions. The size of his plot point in relation to his peers also shows us his touches in the box per 90. It isn’t a particularly high number of touches, and even though some of his 2.18 shots per 90 will be from outside the box, it still shows he is efficient in getting shots away from minimal touches, seeing as he averages 2.81 touches in the box per 90. 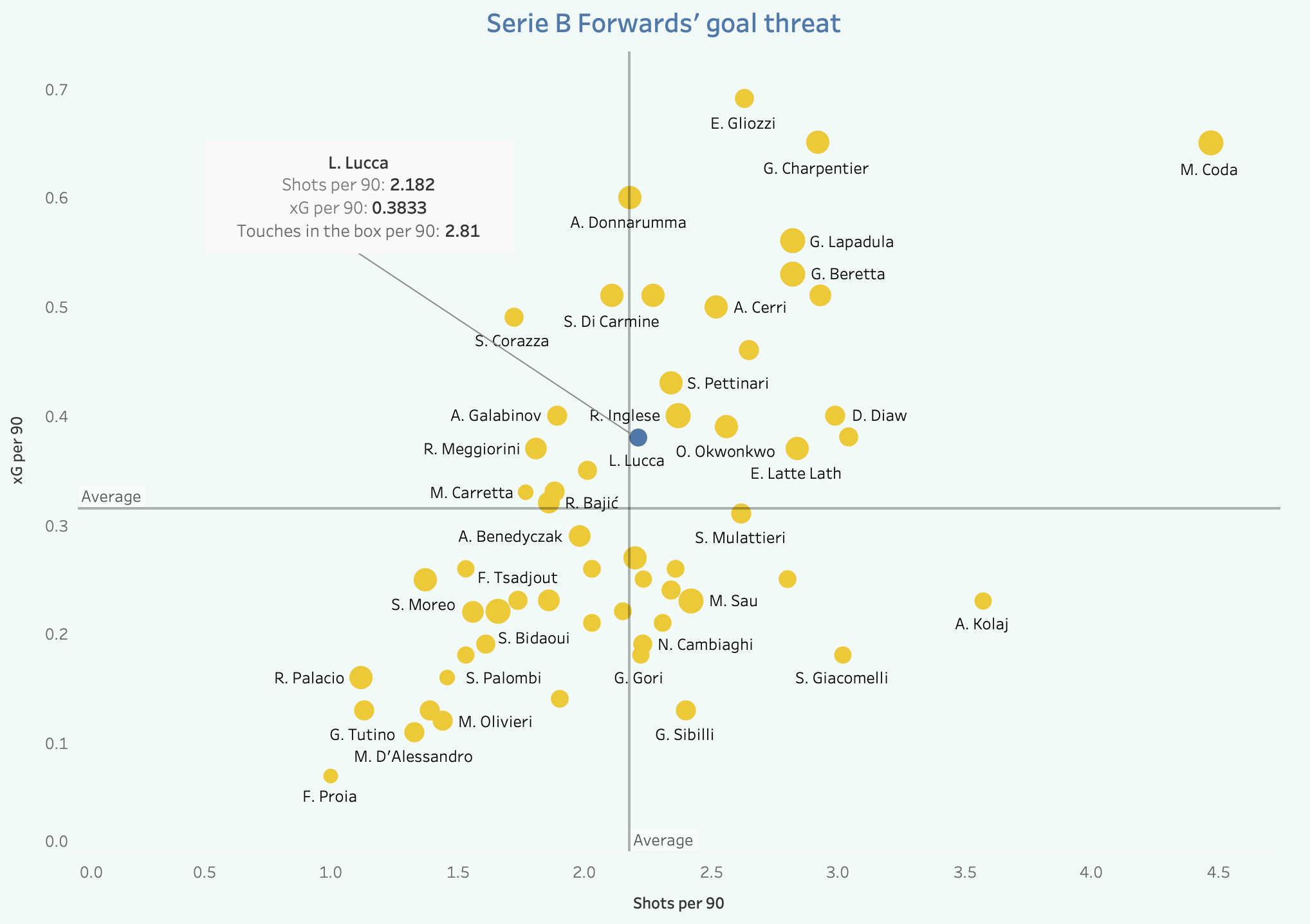 The shot map below gives us further insight into Lucca’s finishing habits. There are some interesting takeaways from this image. Firstly, he is somewhat wasteful inside the area. If he hits the target he generally scores, but there are a high number of shots not hitting the target, suggesting he needs to work on accuracy from shorter distance. He has decent accuracy from outside the area and can score from this range. The majority of his shots come from a centre-right area. 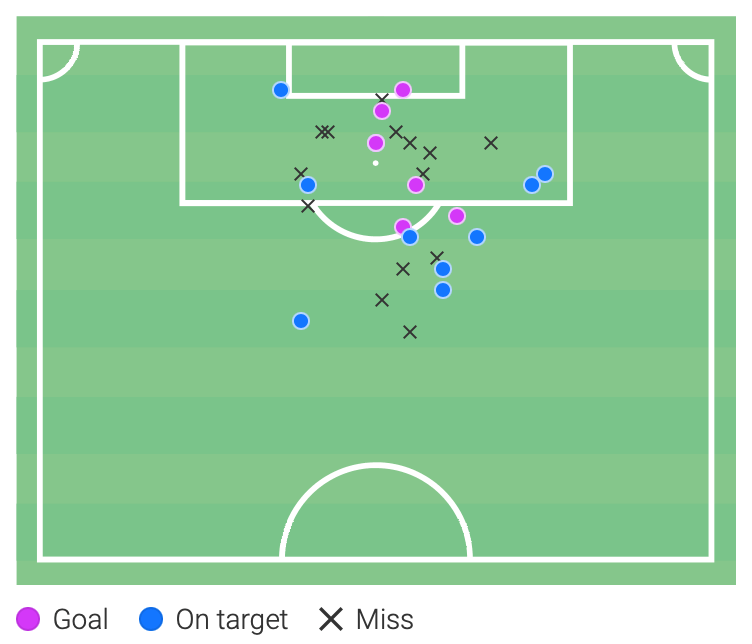 For someone of such height, Lucca could be scoring, or even attempting, more headers than he does. This is an area of his game that he needs to develop and he will surely make strides in as he continues to play at a higher level. He does have a habit of volleying rather than heading. This can be highly effective at times as he may cushion a cross and that can allow him to finish with accuracy from close distance. The image below shows the outstanding dexterity he has to pull off such a manoeuvre. 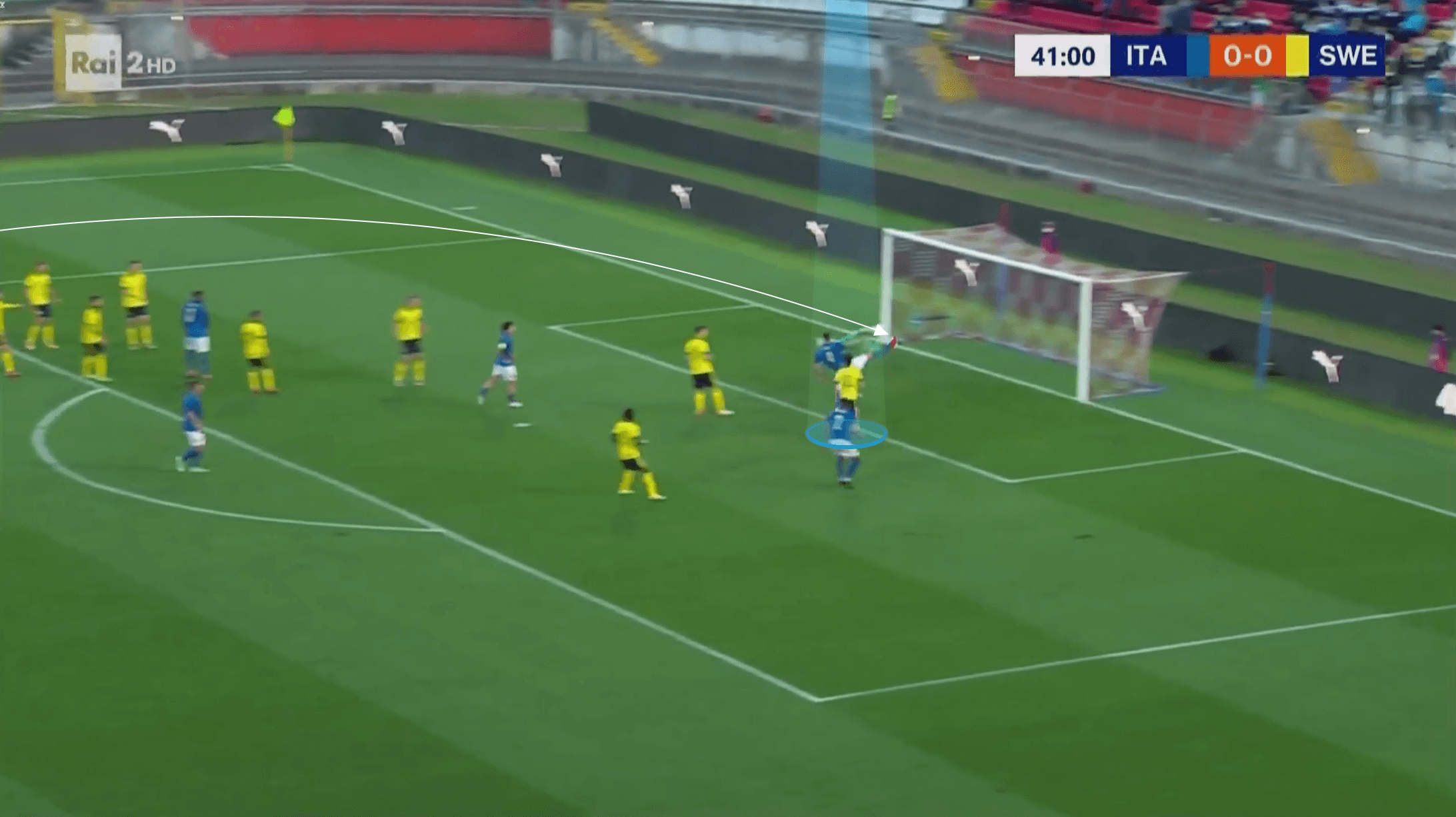 Another striking feature of Lucca’s finishing is his ability to consistently hit the corners of the goal. A lot of his finishes come from him showing quality placement and power when in a 1v1 situation, and if he can continue to finish with such accuracy he will surely grow into a prolific goalscorer. 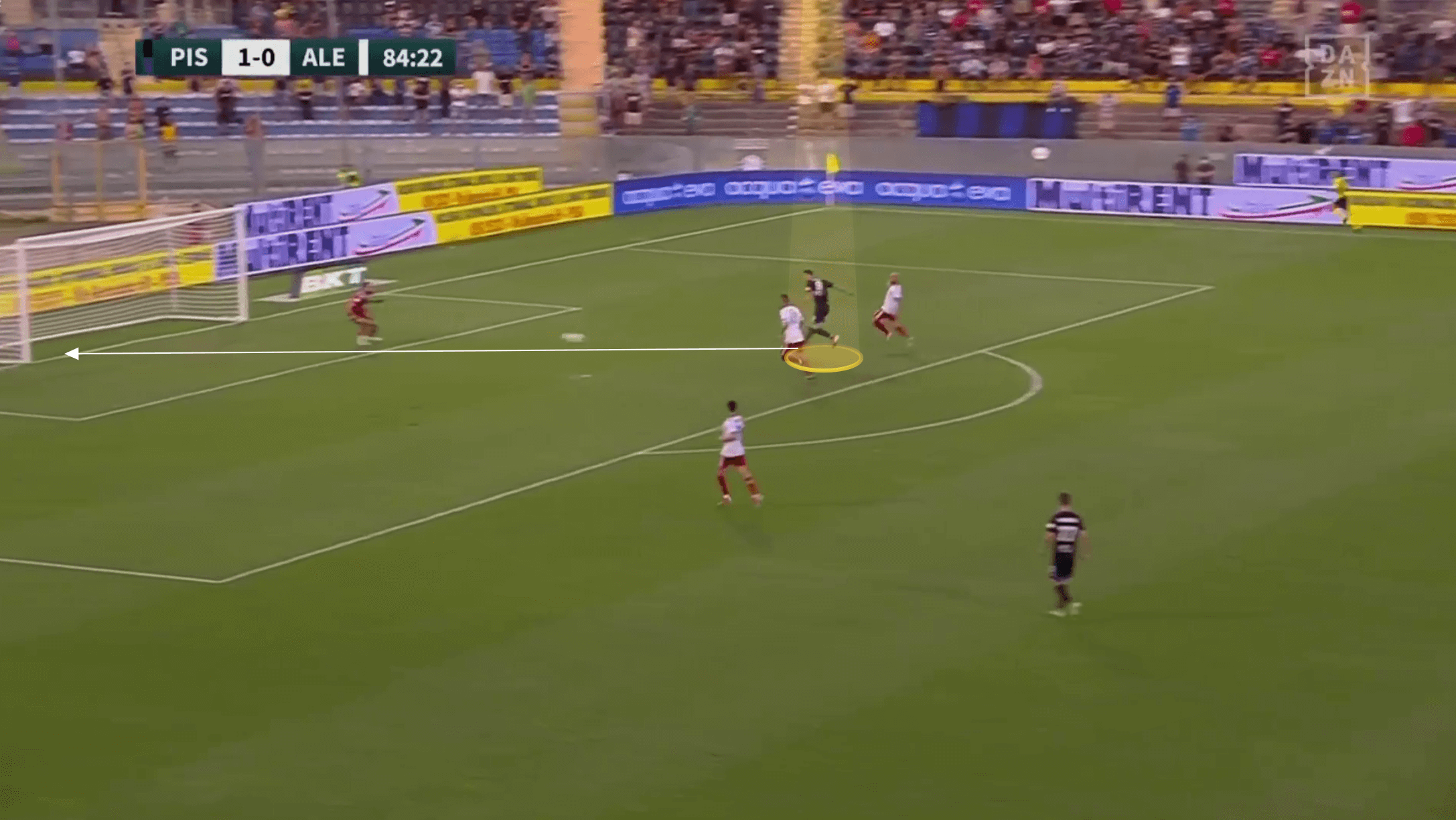 Lucca has finished in such a manner in 1-on-1 moments when in goal against the keeper, but also from more difficult angles, picking out the keeper’s front post. 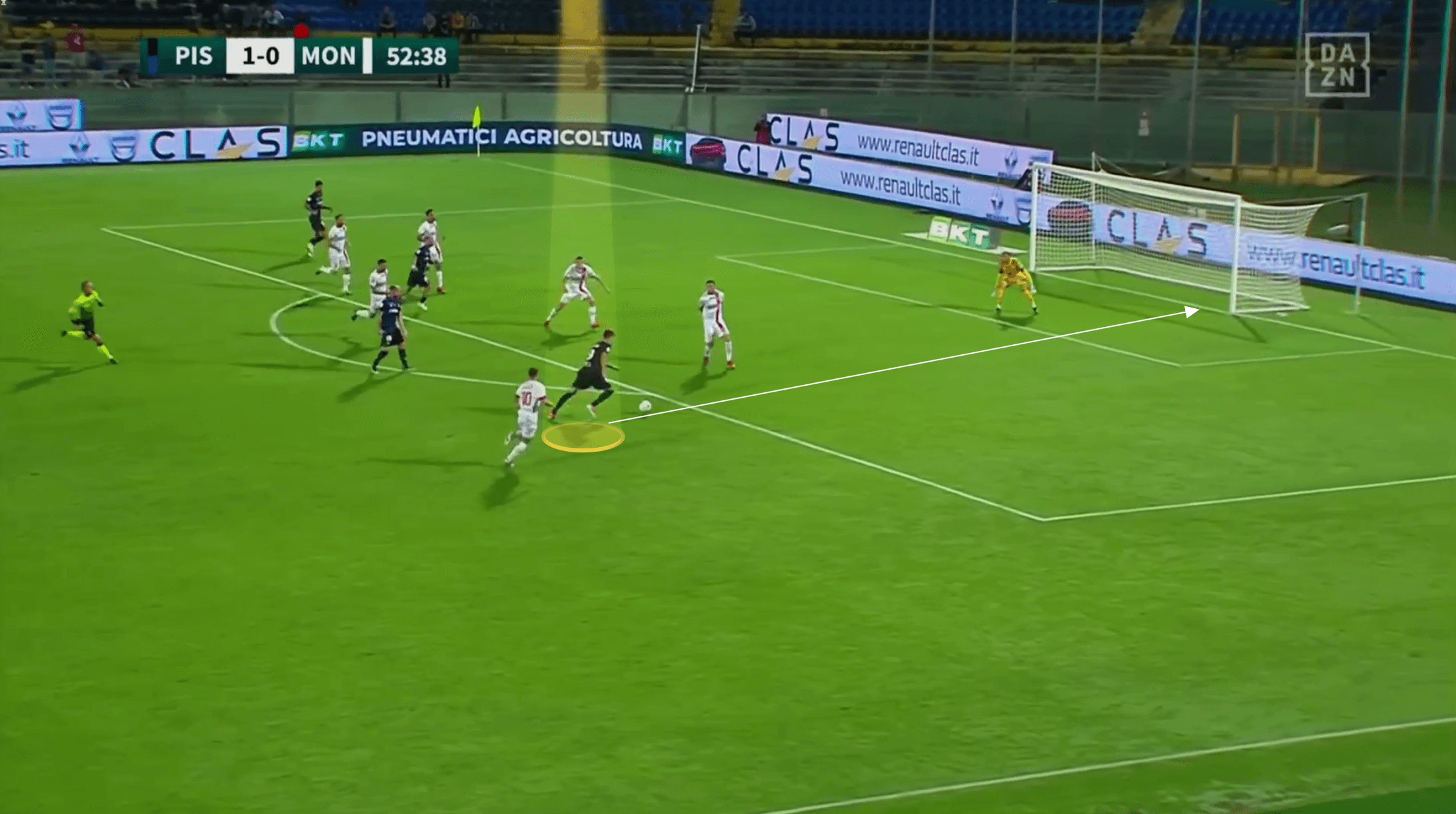 Lucca certainly isn’t just a goalscorer, and whilst he has two assists to his name, the quality he shows in build-up play as already highlighted is a key factor in constructing attacks for Pisa.

The graph shown below gives an insight into his performance as a provider thus far this season. We can see has completed a respectable amount of pass to the penalty area, with his 59.97% completion above the league average. However, his volume of through passes lies below the league average. We can see that from his assists per 90, shown by his plot size in relation to that of the rest of the dataset, he performs admirably but admittedly isn’t an outlier. 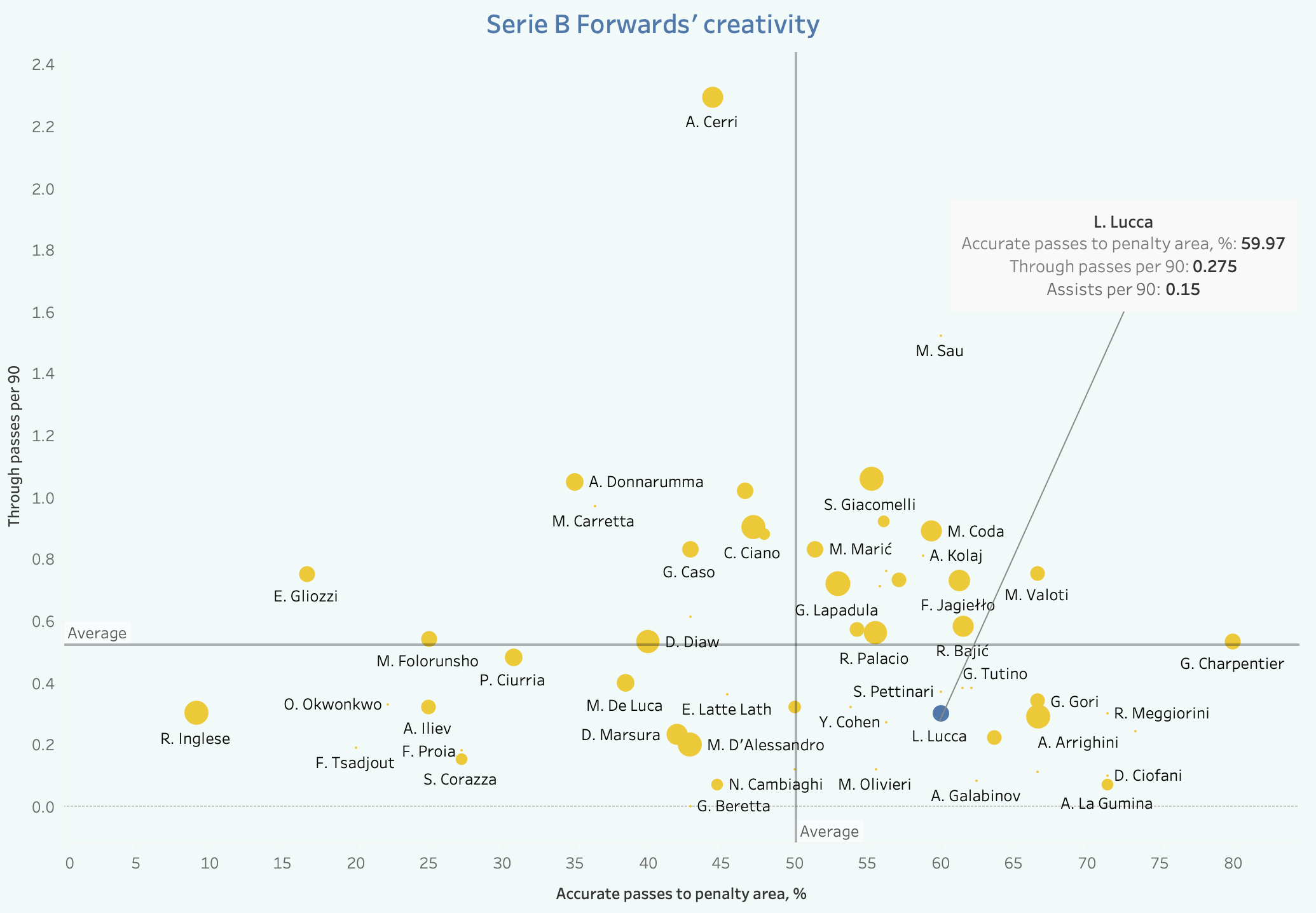 The chances Lucca provides that either result in a goal or a quality shooting opportunity often come from a slightly wider area. As mentioned he does well when isolated against a defender, using his frame to outmanoeuvre them. He is a relatively talented dribbler, completing just over 40% of his 2.24 attempts per 90 this season. He is at his best when he can roll a defender, like in the following image.

We can see him backing into the defender once again as the pass is played forward to him. 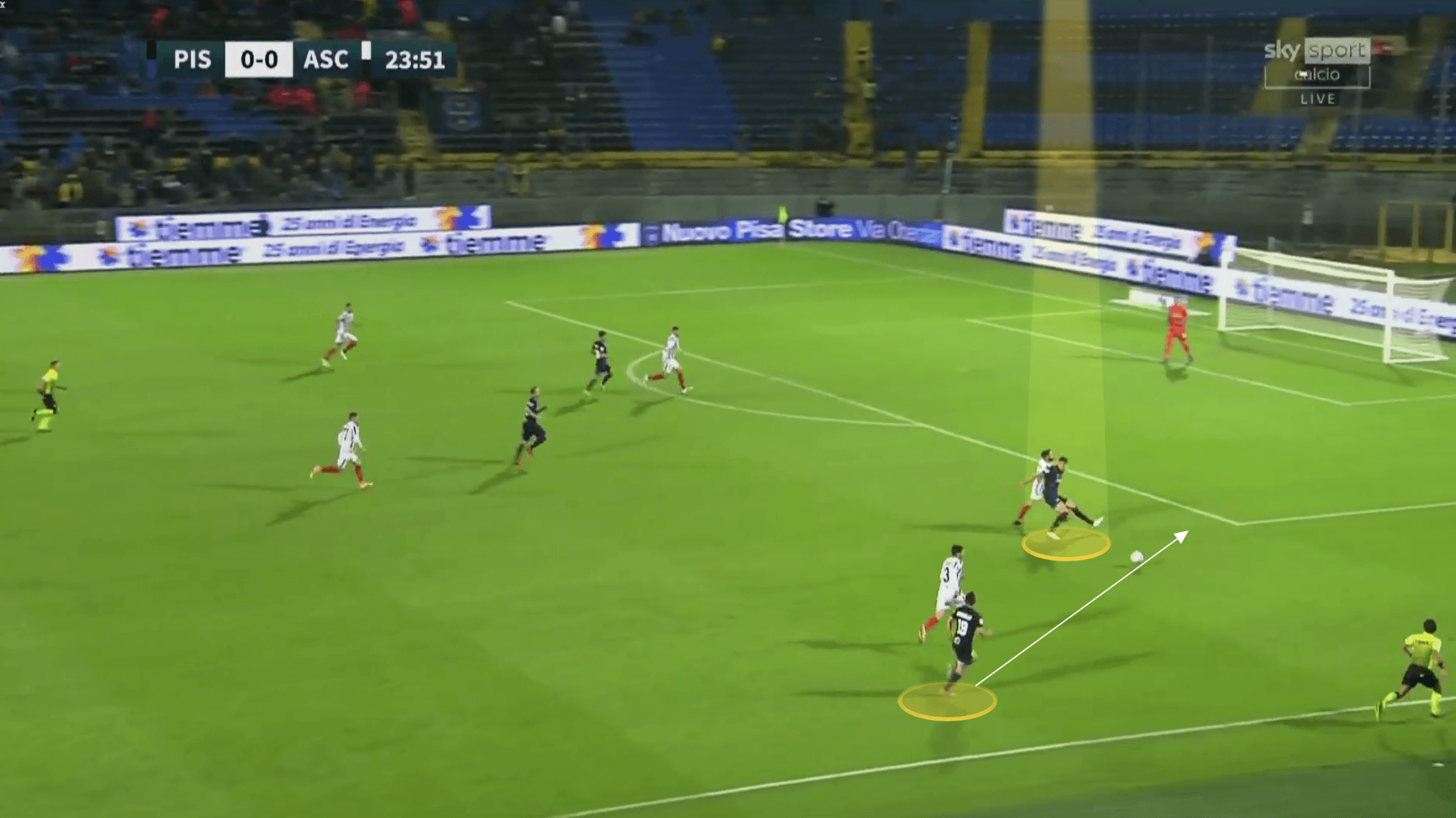 After he has created that space for himself he can then drive towards the byline, angling his run towards goal. He will look for the pull-back cross in between the six-yard box and penalty spot, or will look for the simple ball across goal to the front post, which we can see he does in the next image. 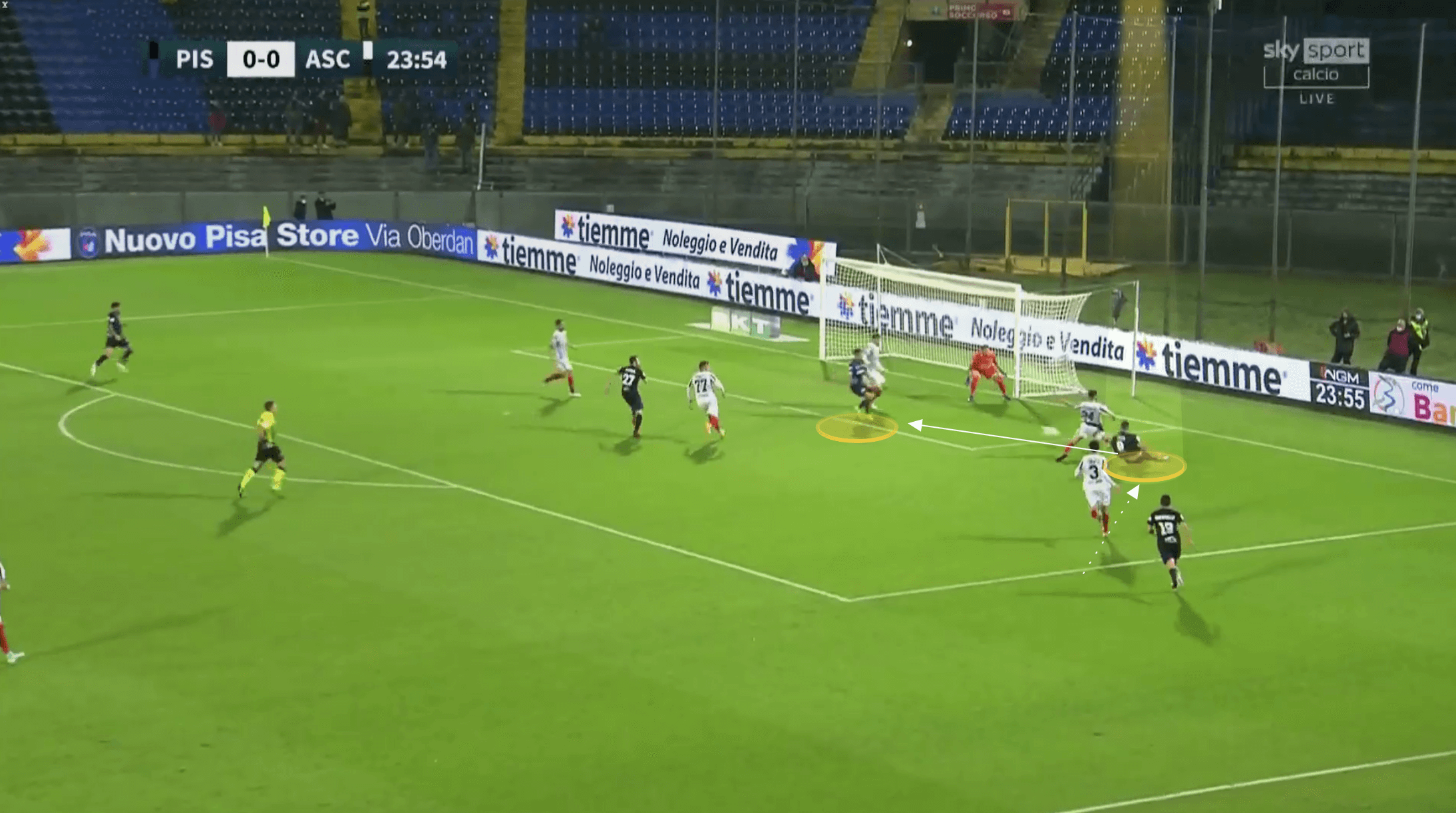 However, if we are to look at another example, in a similar situation Lucca can pull the ball back to good effect. Again he turns the defender, backing into them, and using his pace to create enough space. 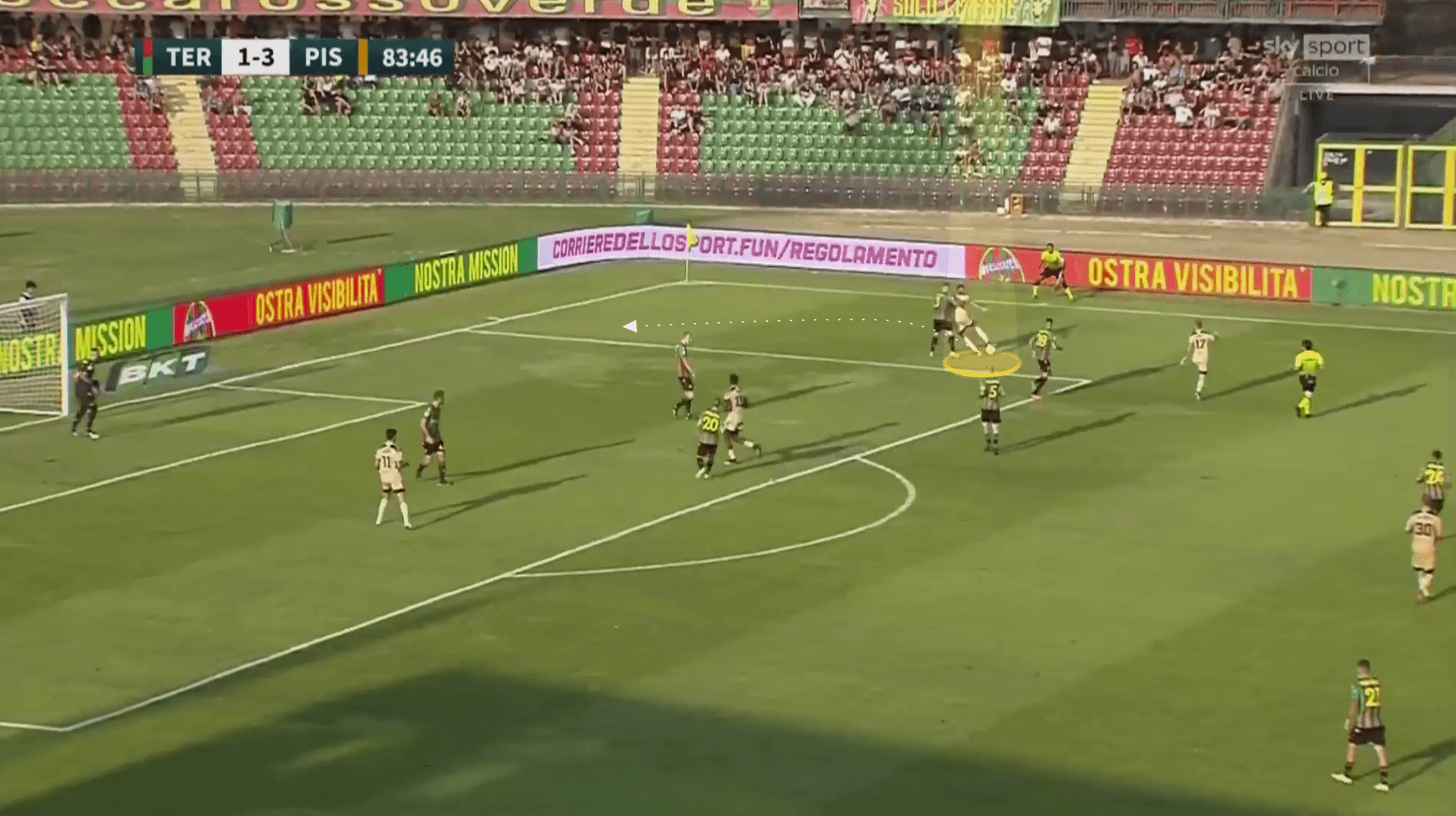 Once in a position to find a pass, Lucca doesn’t get his head up but instinctively and perhaps using his peripherals, finds his teammate in space, waiting near the penalty spot. 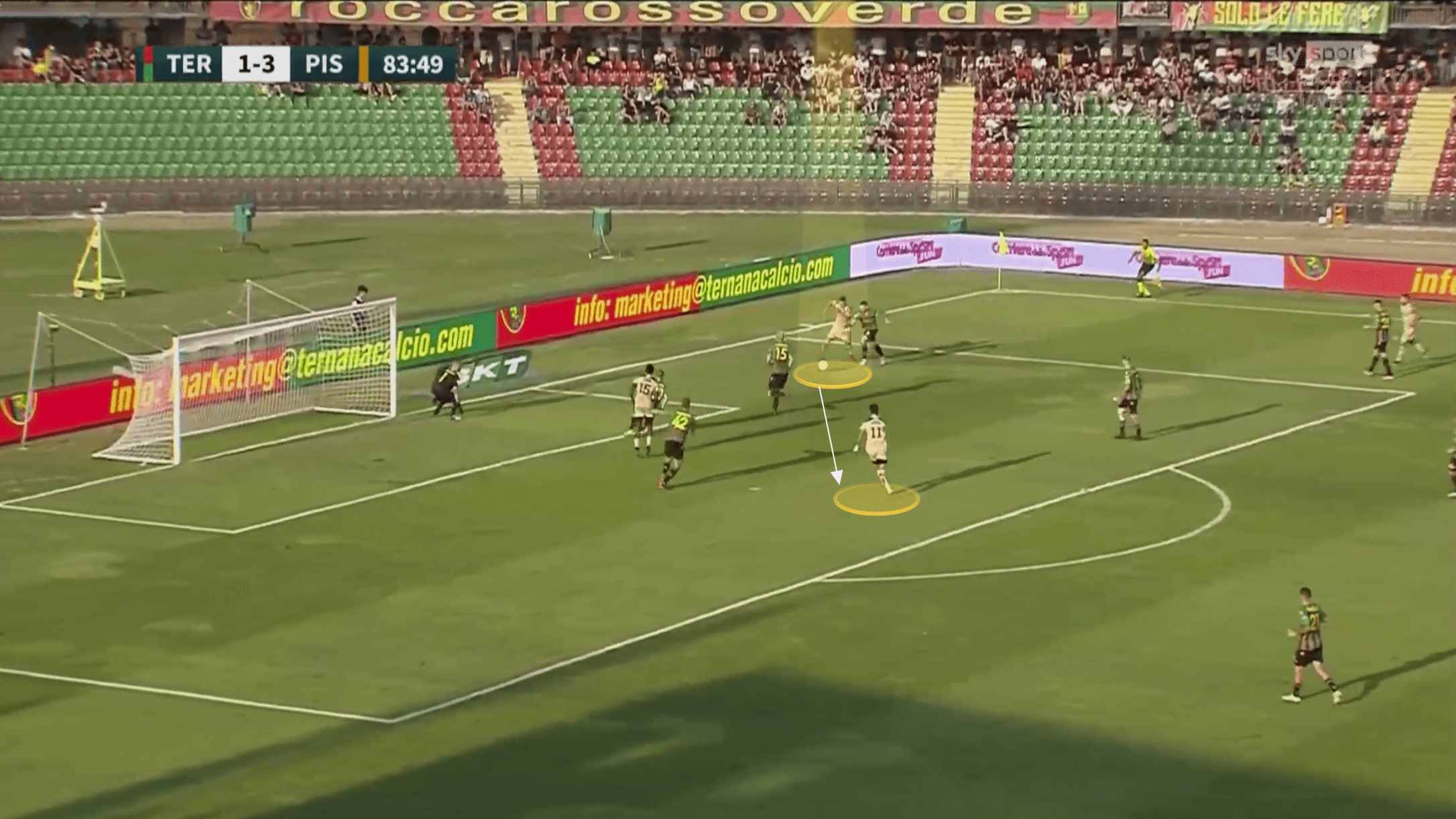 Lucca is a technical player too, and whilst he doesn’t regularly create from deeper areas, he has shown an ability and a cool-head to pick a pass in moments of transition. We saw this in a recent U21 game against Ireland, where he was able to drop deep and get on the ball early in the attacking transition, before expertly placing the ball with a curved pass into the path of his teammate, and into the open space behind the Ireland defence. 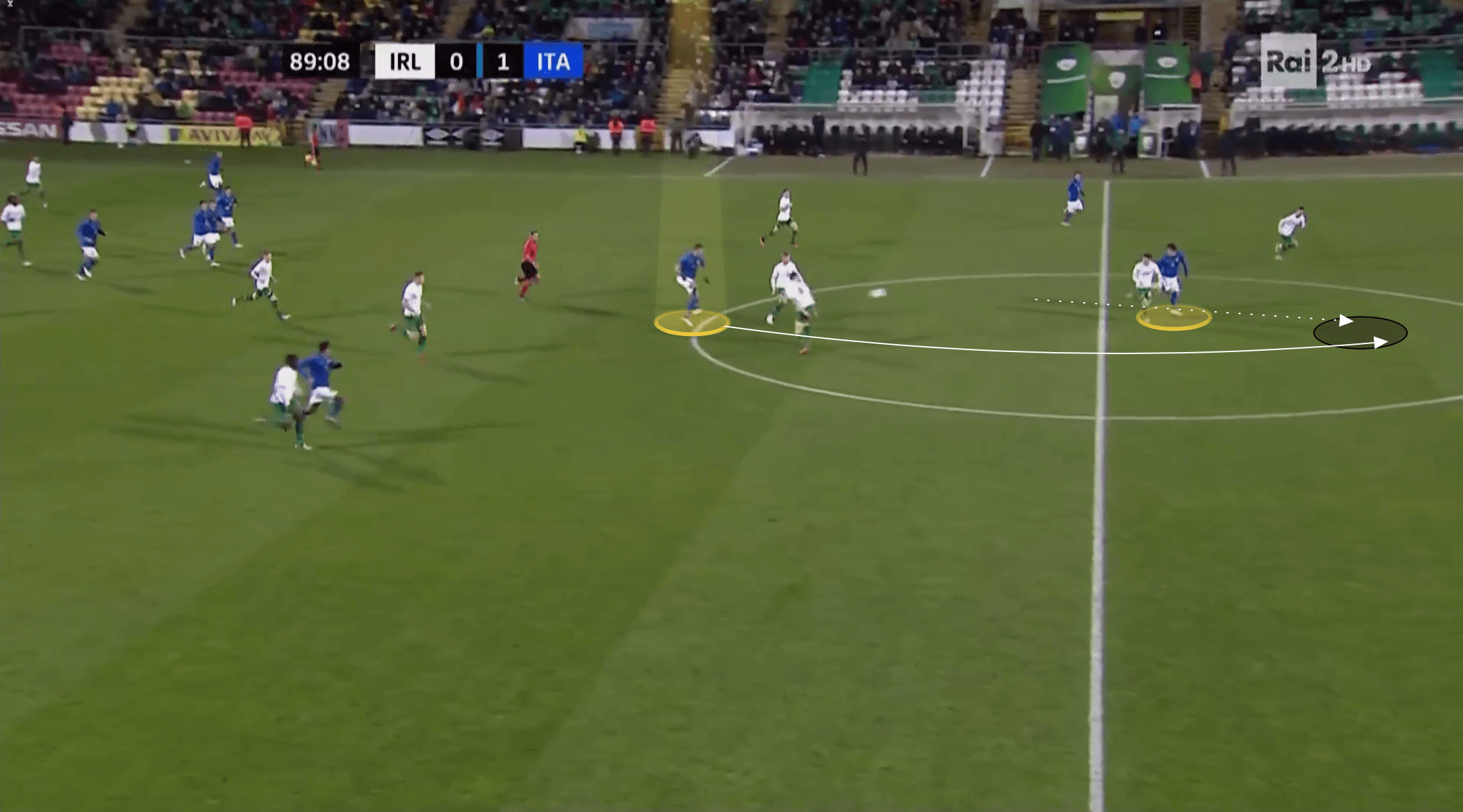 Lucca is an excellent place to continue his development. At Pisa, he is in a side that is winning regularly and looks set to gain promotion into the top division if they continue with the form they have shown in the first half of the season. He is going to continue to get game time and he is going to be able to grow with this team. If he were to be picked up by another team this could easily stem the progress he has made, and having only joined last summer, Lucca would continue to progress if he stayed at Pisa for the foreseeable future. However, it is inevitable that bigger clubs will be interested, and the likes of Juventus, AC Milan, and Inter are already rumoured to be circling, seeing Lucca as a classic Italian target man who has a goalscoring streak to his game. 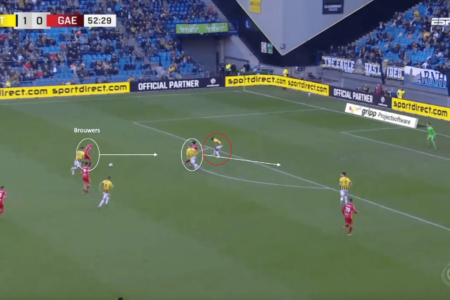 When you think of the Dutch midfielders currently mainstays in the national team, names like Gini Wijnaldum at PSG, Frenkie […] 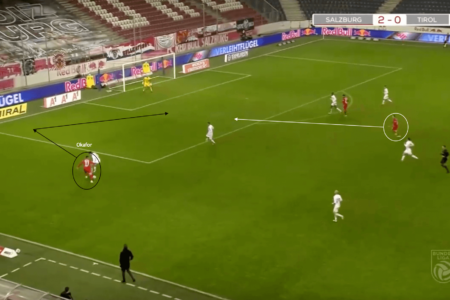