Hanna Bennison at Everton: How can the 18-year-old Swede fit into Everton’s midfield and help in reaching UWCL – scout report

Hanna Bennison has joined Everton Women last week coming from Rosengård, joining her other two Swedish teammates Anna Anvegård and Nathalie Björn, and she already caught all the media’s attention following her first transfer outside of Sweden. The Swedish international (yes, she has already played for Sweden) will most probably shine at Everton given her quality but also given the excellent squad Everton have been building. The team has been reinforced with key players in most positions who can make this Everton side challenge seriously for the top three spots and why not for the title if the head coach succeeds in exploiting his players in the best possible way.

In this tactical analysis article, we will explore how Hanna Bennison would fit into Everton’s midfield and how she can be very useful alongside her new teammates despite her young age. The analysis will include her main traits while looking at what’s she is already excellent at and what she can improve by playing at Everton and against tough FAWSL teams such as Chelsea, Arsenal, Manchester City and Manchester United.

Willie Kirk, Everton’s head coach, will be able to use Bennison in plenty of formations and give her mixed roles as she played as a central midfielder and as a defensive midfielder according to many systems. She can play alongside just one midfielder in a 4-2-3-1 formation as she can do well in a 4-3-3 formation with three players in midfield. Moreover, at this young age, Kirk will be able to employ Bennison in the way that he wants while giving her the desired movement instructions in order to execute certain plans. This will be helpful for Bennison to be even more mature tactically as it will fasten the process of this tactical maturity. Plus, playing alongside players like Aurora Galli, Kenza Dali and Izzy Christiansen in midfield (to name a few) will contribute hugely in making Bennison play better and have more confidence in her abilities.

In fact, Bennison can form a complementary midfield duo either with Galli or with Dali as both these players are mainly defensive midfielders who are excellent in this aspect. This will enable Bennison to play without much worry and focus even more on passing and playmaking as this is one of her best characteristics. And as you can see in this picture, Bennison is not a player who stays in a single position, she is a dynamic player who likes to advance and contribute in assisting her teammates and actually also score goals. And this is something that shouldn’t be ignored by Kirk. 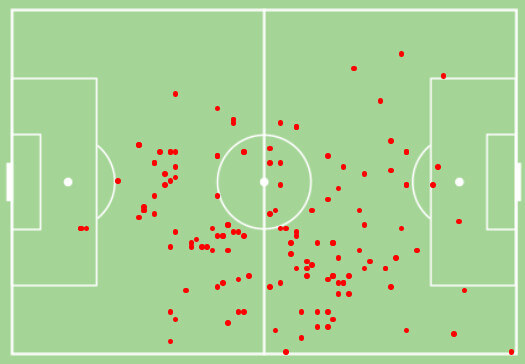 When it comes to her playmaking skills, Bennison has proved in the last Olympics that she is following the steps of Caroline Seger in terms of tactical discipline, vision and passing. Even though she is yet to become as mature as Seger in terms of vision, Bennison showed that with a little more games and experience she can reach that level and why not become even more decisive since she has the potential to do it, and we’ll see how below.

Bennison showed during her time at Rosengård as well as for Sweden that she can create danger using long passes between the line and sometimes behind the defensive line. And as you can see from this example, she was excellent in choosing the adequate crossing timing to not let her teammate fall in the offside trap, which is very fundamental these days.

At Everton, Bennison will see a lot of attacking movement without the ball especially from Valèrie Gauvin, which will help her in attempting these long-passes more often and with more concentration. Ultimately, the players will need to train on such attacking plans and execute them in official games to ensure no errors happen and to strengthen the chemistry. 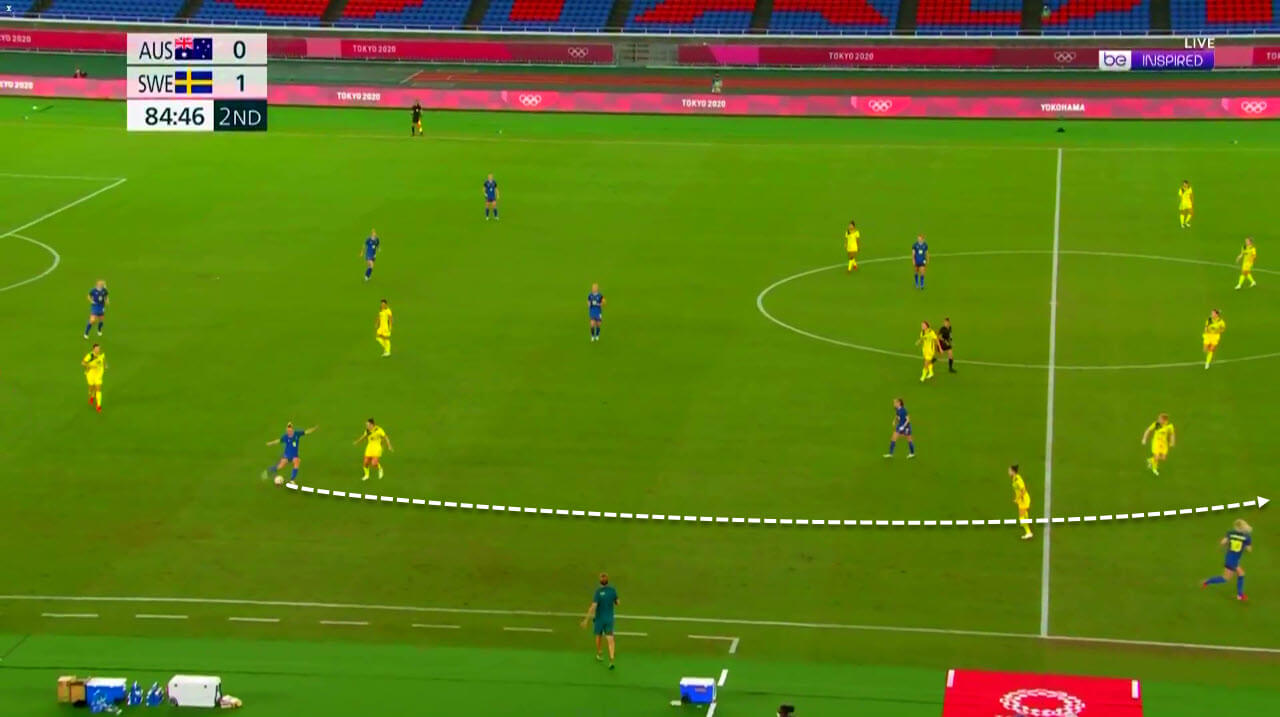 Moreover, Bennison has got the abilities needed to play well even in the final third as she is always focused on her teammates’ movements and on the defenders’ positions in order to the pass the ball accurately in the free space. Even though this sometimes looks difficult for other players, Bennison is a player who already has the passing skills that allow her to serve her attacking teammates even when the pass looks like a risky one.

In fact, those risky passes are most of the time the passes that create the difference since defenders expect them less and therefore relax more than needed, and it needs excellent strikers to sense those seconds of confusion and exploit the opportunity, just like what happened in this goal action. Bennison here acted like an advanced playmaker while passing a through ball behind the last defender for her teammate who exploited the pass and scored a goal, leaving the defender confused. 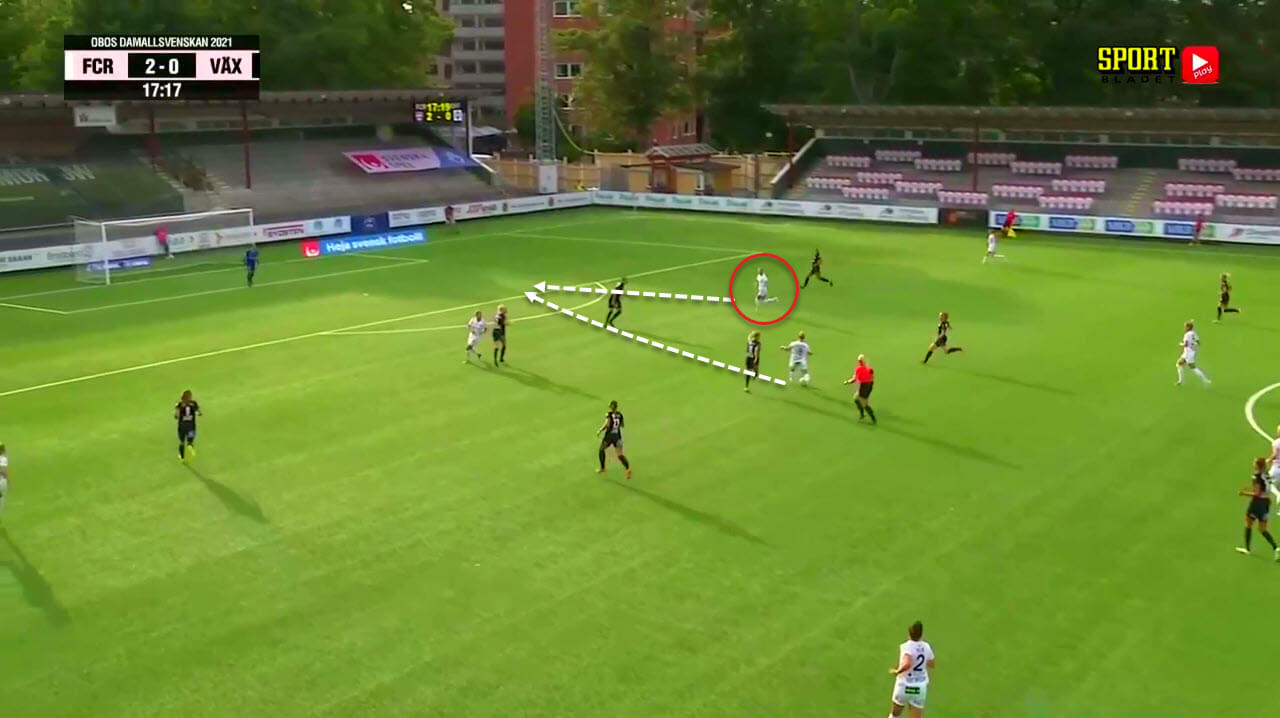 Another key aspect in Bennison’s playmaking skills is her ability to cross and give key passes with her weaker foot as this can be crucial in certain situations when she is being pressed and obliged to use her left foot.

In fact, Bennison doesn’t have any problems with this since she even succeeds in providing assists with her weaker foot, like you can see below. 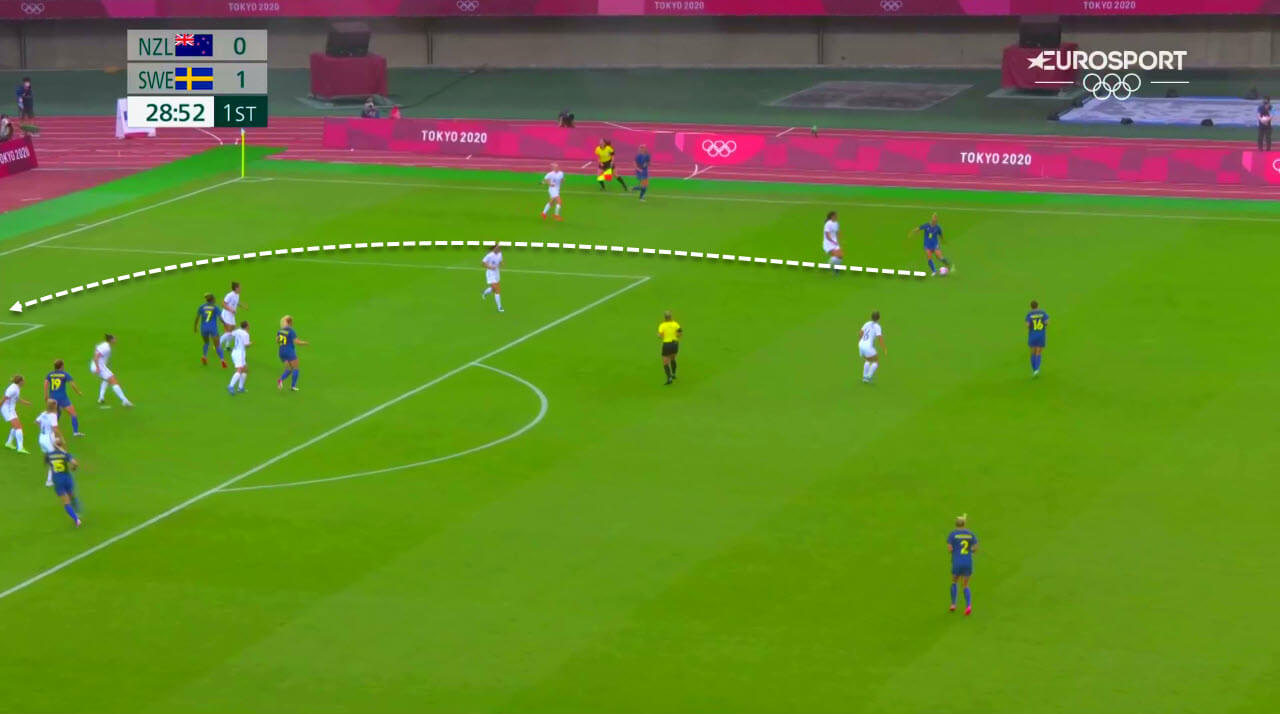 Receiving the ball under pressure is also something that Bennison will encounter regularly in the FAWSL, and she should be attentive enough to not give away the ball in these situations.

If she adapts well at Everton, Bennison will not have issues with this since she faced such situations in the Swedish league and she dealt well with the situation when she was pressed by three and more players. Being able to play with one or two touches maximum will be fundamental in such situations and that’s exactly what she was able to do in this example. She got rid of all the pressure with a through pass to the right-winger, with a decision made before even receiving the ball to win some precious seconds over her markers. 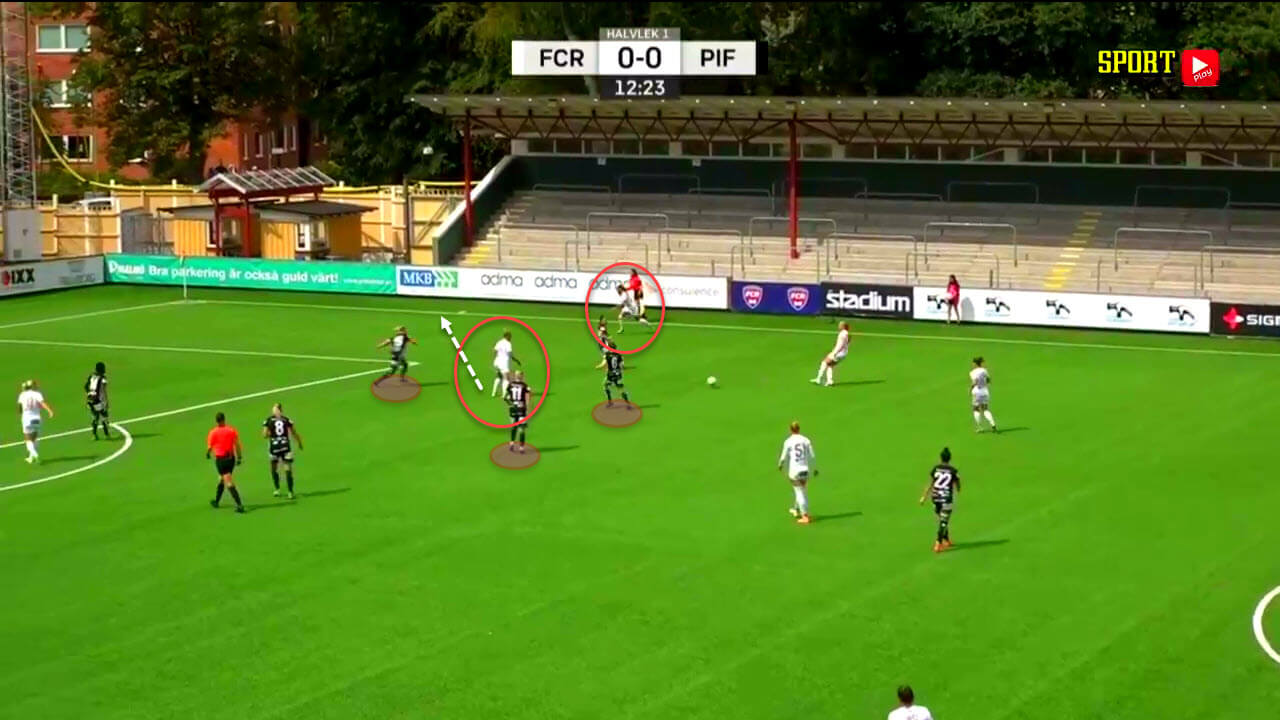 In addition to being a very good passer and having a great vision of the field as well as being a solid defensive midfielder who knows how to intercept passes but needs to improve in defensive duels, Bennison can also be a decisive goalscorer whenever her team needs her.

She is mainly excellent in first-touch shots for second balls. She has scored many goals from such situations as she proved that she can shoot with great power and precision too. And as you can see in the following example, Bennison actually knows how to score with her weaker foot too, which is excellent for a midfield player. 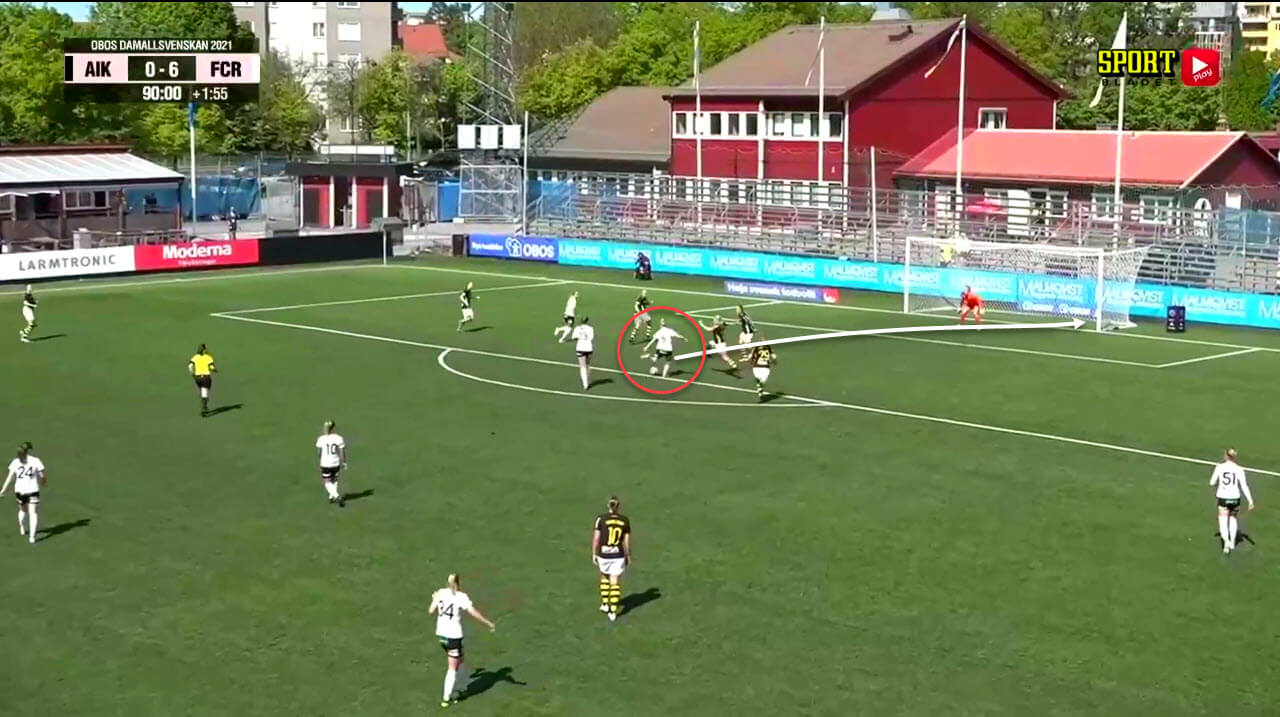 In the following two examples, you can see how Bennison can be a merciless finisher for second balls or in actions that allow her to surprise goalkeepers. She has got many shooting techniques and she uses them perfectly according to the situation. And this will help her a lot in the FAWSL especially if she gets many shooting chances and if Kirk allows her to advance so often. 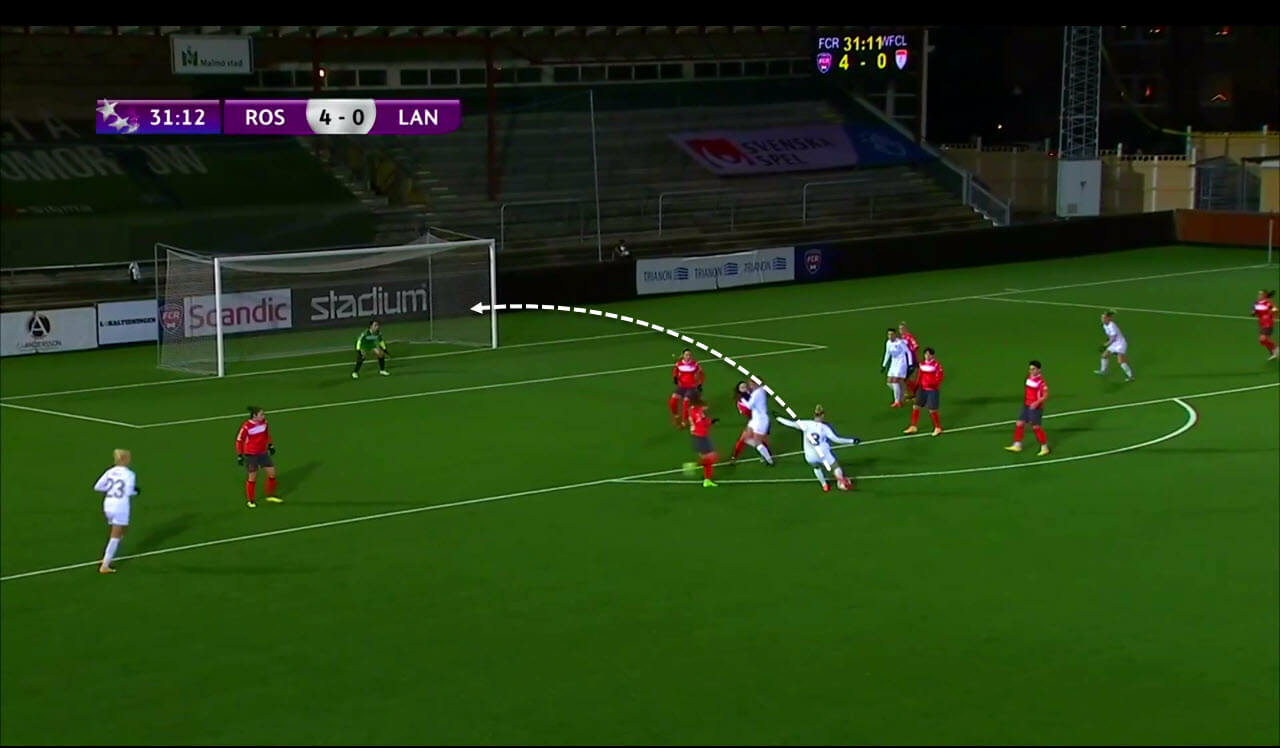 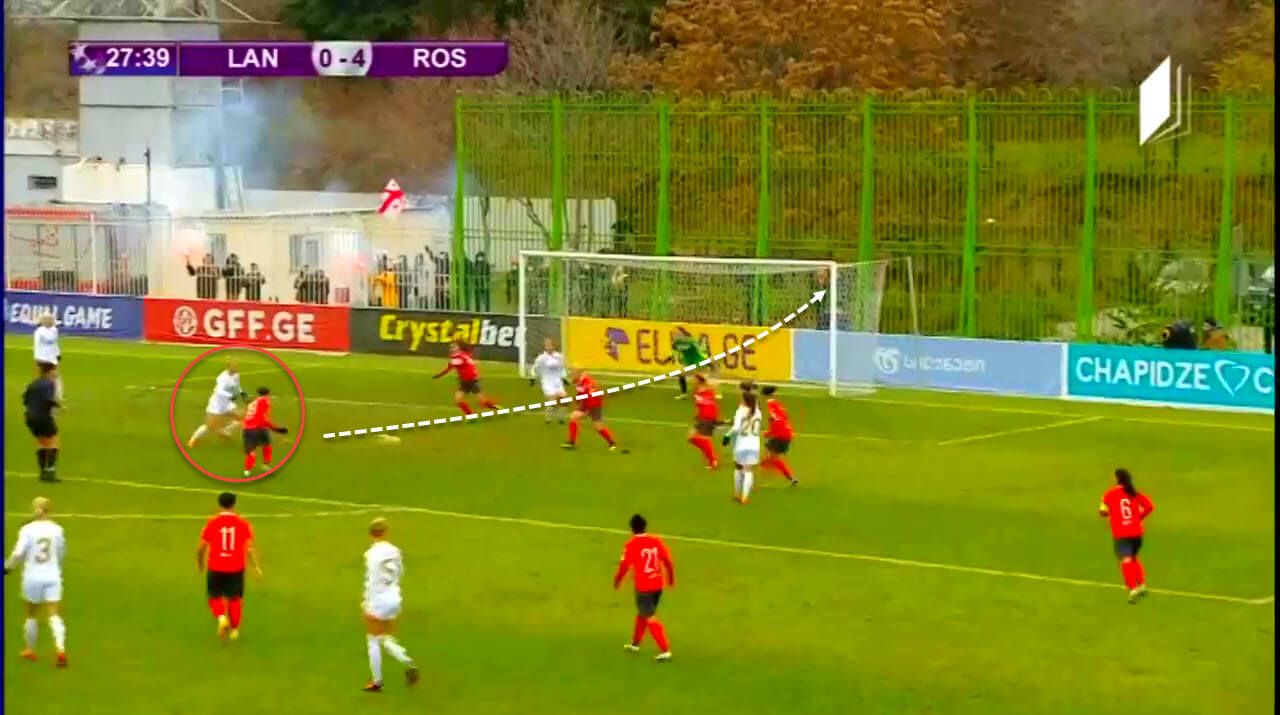 Hanna Bennison is an intelligent signing for Everton and it will surely be successful since the player has got a lot of potential and has the right mentality too. Her experience in UWCL will also be beneficial for Everton when playing against tough teams soon.