Ewa Pajor is a Polish international player who started her career at Medyk Konin in Poland from 2012 to 2015 before moving to Wolfsburg and putting in some excellent performances with the team, staying with them until the present day.

Pajor is now 26 years old and she has acquired a kind of tactical maturity that is helping her perform in an impressive way. At the moment, she is helping her team lead the Frauen-Bundesliga with 30 points and a five points difference ahead of Bayern Munich.

In fact, Pajor has been winning the league title since 2016 without stop, meaning that she won the 2016–17, 2017–18, 2018–19, 2019–20, 2021–22 Frauen Bundesliga titles and helped her team dominate the league and prevent teams like Bayern Munich from doing it. At the same time, she acquired a lot of experience by playing in the UWCL, knowing that Wolfsburg are among the best teams in the competition in terms of participation and history. They finished runners-up three times (2015–16, 2017–18 and 2019–20) when Pajor was with the team and this shows that the player is accustomed to playing in the advanced stages of the competition and especially reaching finals.

In this tactical analysis scout report article, our focus will mainly be oriented towards Pajor’s role in Wolfsburg’s tactics, her position, main characteristics, strengths, weaknesses and what makes her an excellent attacking player.

Pajor is mainly a striker who can play in almost all attacking positions on the field. She has the characteristics that allow her to perform at her best as a striker since she is crucial in front of goal whether she’s using her feet or head. In other words, Pajor is a great finisher on whom Wolfsburg and Poland can rely on to score goals.

In addition, Pajor’s roles do not only include scoring goals but also providing assists to her teammates, passing when needed, moving to the wings to give extra options and leaving space inside the box for players coming from behind, pressing high on defenders in the non-possession phase in order to intercept passes and disturb the opposing build-up from the back and more.

Moreover, Pajor can play very well as a right or left winger too since she is a quick dribbler and a very dynamic player with the ball at her feet. She played in this position several times and proved that she doesn’t have any problem regarding it. Plus, Pajor can also be employed as an advanced playmaker just behind the striker, providing passes and linking the midfield with the attack. She can interpret this role well too since she has the vision and the passing accuracy needed for such a role.

This being said, Pajor’s capacities can be 100% exploited in the striker position and that’s why most head coaches use her in this position. In fact, she is actually one of the best strikers in Europe in terms of finishing and assist-making as well. The following heatmap just explains how dynamic Pajor can be during games as she covers the whole final third, moving towards the right and left wings frequently and dropping to help in the defensive phase regularly as well. 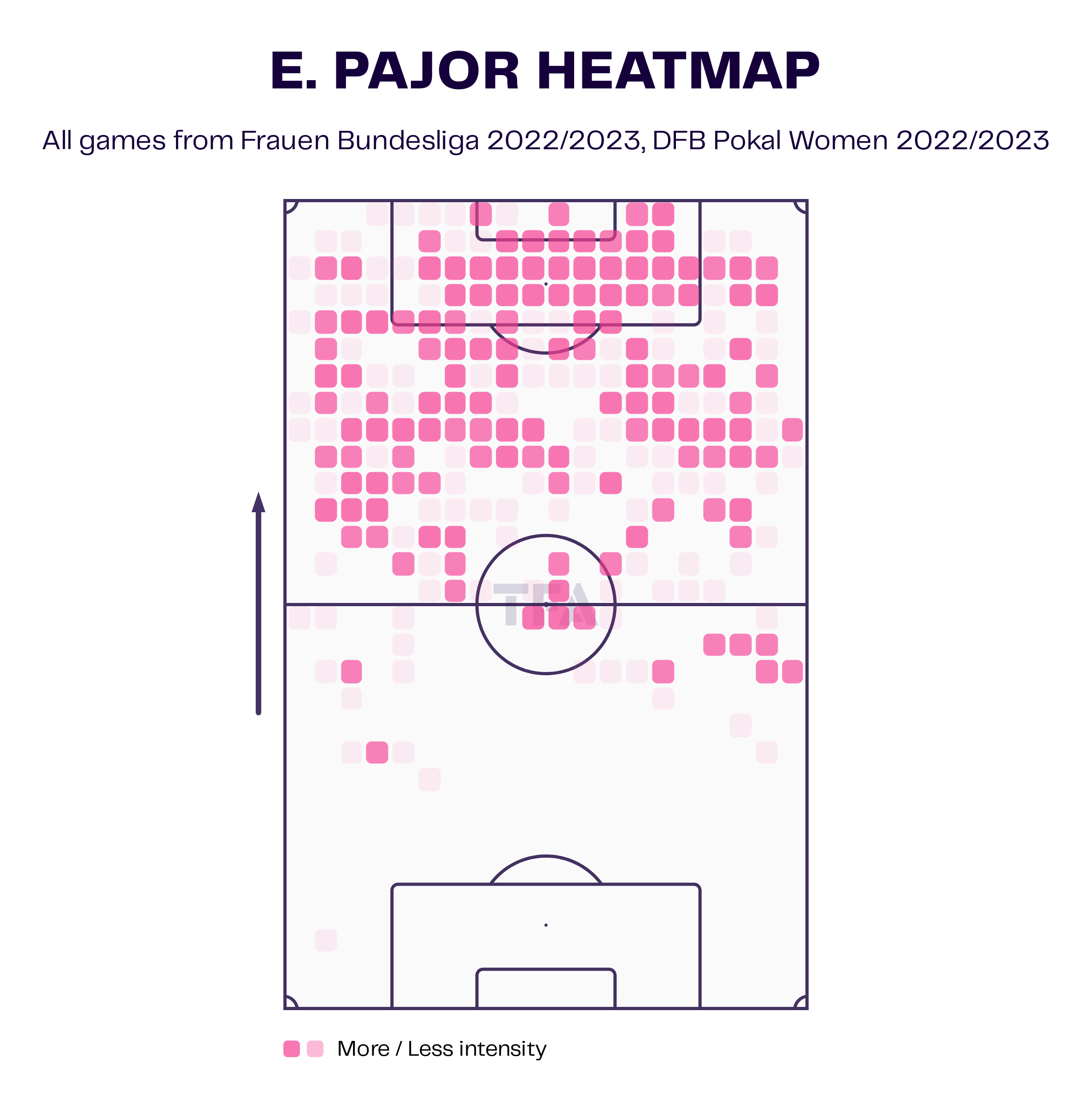 In terms of goalscoring, it should be said that Pajor has an xG of 0.92 and a shooting accuracy equalling shots on target. Although these statistics are not excellent enough, the reality is that Pajor is a very clinical player in front of goal. She proved on more than one occasion that she is an excellent finisher and an instinctive goalscorer.

Wolfsburg and Poland rely on Pajor heavily when it comes to headers. They exploit Pajor’s outstanding aerial abilities during set-pieces and crosses from the wings to find her headers which would mean goals on most occasions. In the following example, you can see how Pajor was able to beat her marker and the goalkeeper by lobbing the ball with a header as soon as she saw the goalkeeper going out of her goal. This can only highlight Pajor’s use of technique in headers and not just power without thought. 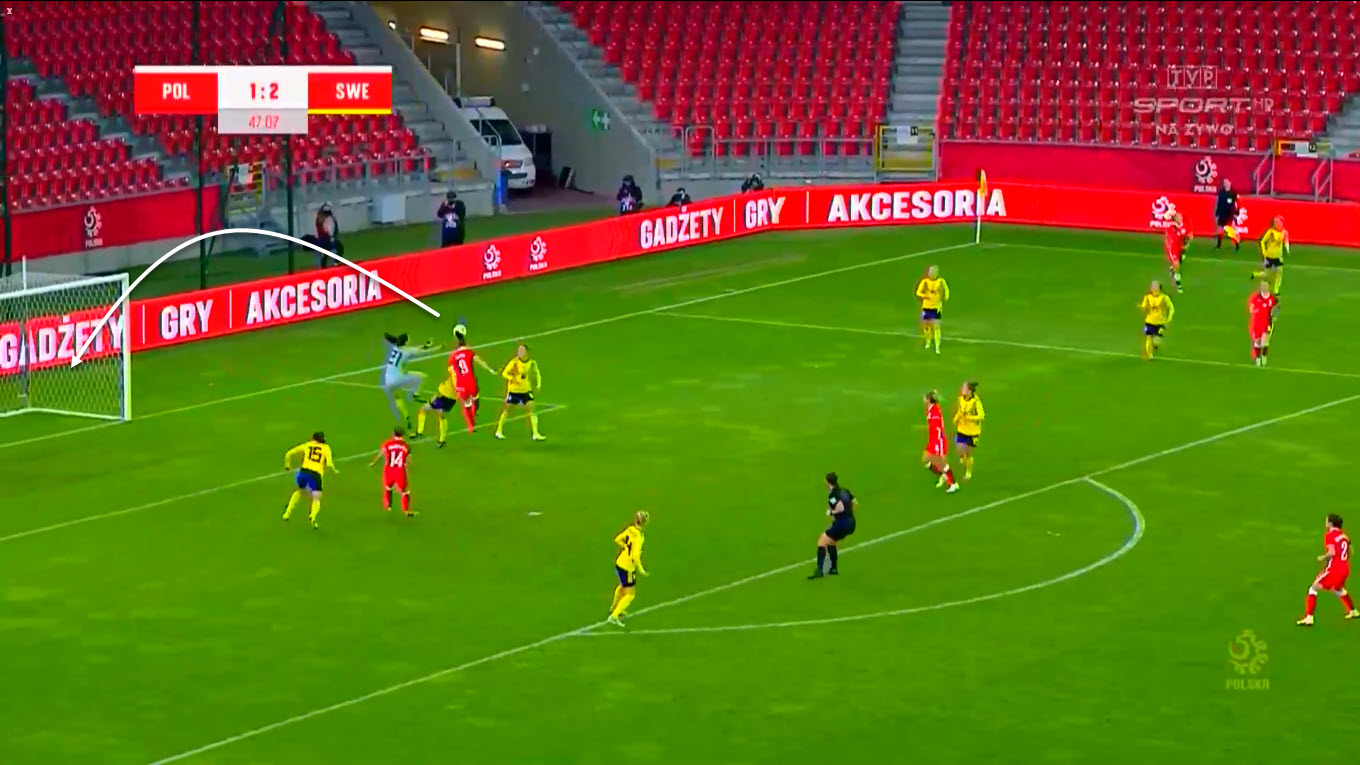 In the following set-piece example, Pajor succeeds in making the necessary impact on the ball as she hits it from the near post but with a deviation that makes the ball go towards the far post, confusing the goalkeeper and the defenders and not leaving time for anyone to save the goal or even attempt to do it. Such great technique is extremely important for teams like Wolfsburg, Bayern Munich, Barcelona, Chelsea, Lyon, PSG, or any other big team since it serves them a lot when games get too defensive or too tactical. 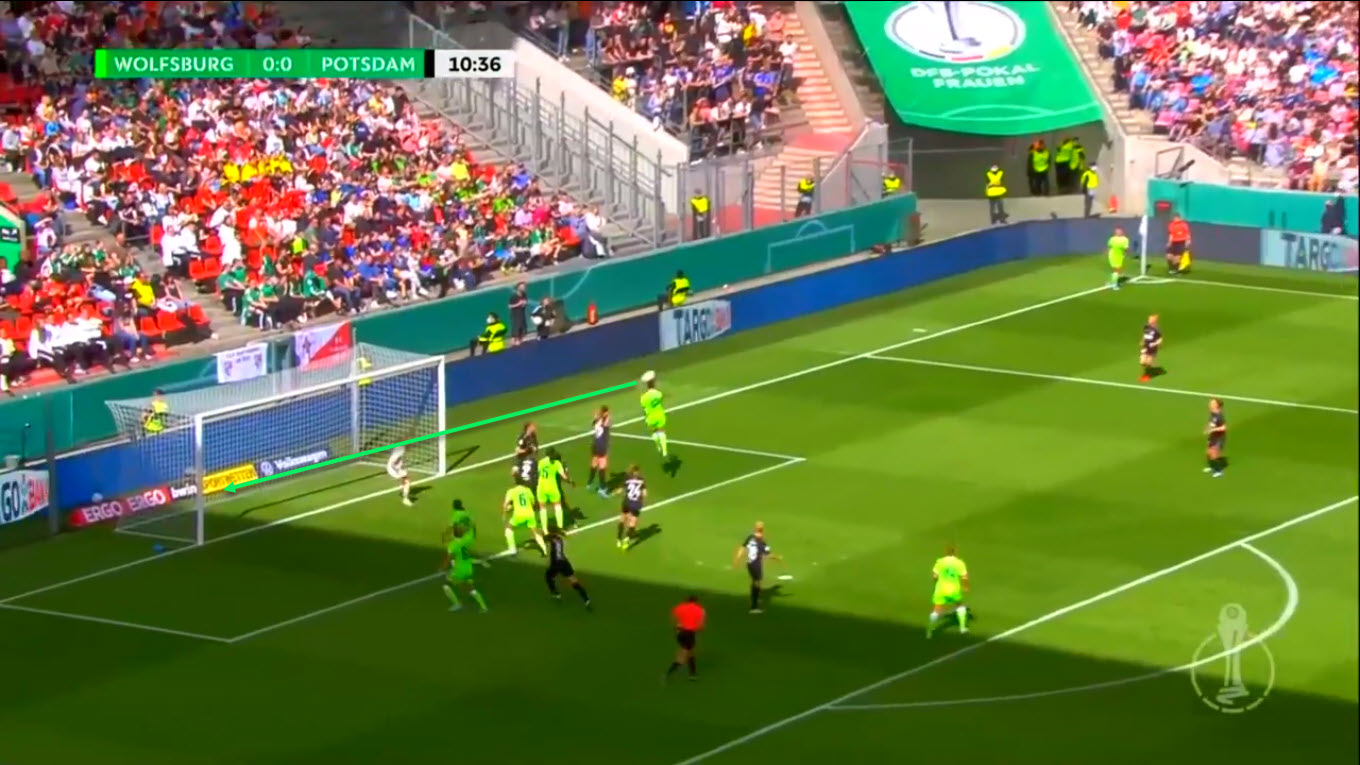 Pajor uses her dribbling skills and pace very well in certain situations especially when she finds herself in complicated ones or when goalkeepers get out of their goal trying to close shooting angles. On such occasions, Pajor doesn’t fear dribbling and she knows how to do it without risking the miss or closing the angle for herself.

In the following image, we see her receiving a pass while the goalkeeper was already out of her goal. Pajor immediately feinted towards the right in order to move away from the goalkeeper and then shoot towards the empty goal. And she succeeded in doing so mainly because she didn’t let the ball advance a lot, otherwise, it would have been impossible for her to shoot on goal. These little details often create the difference between strikers and being able to deal with complicated situations is what differentiates top strikers from average strikers. 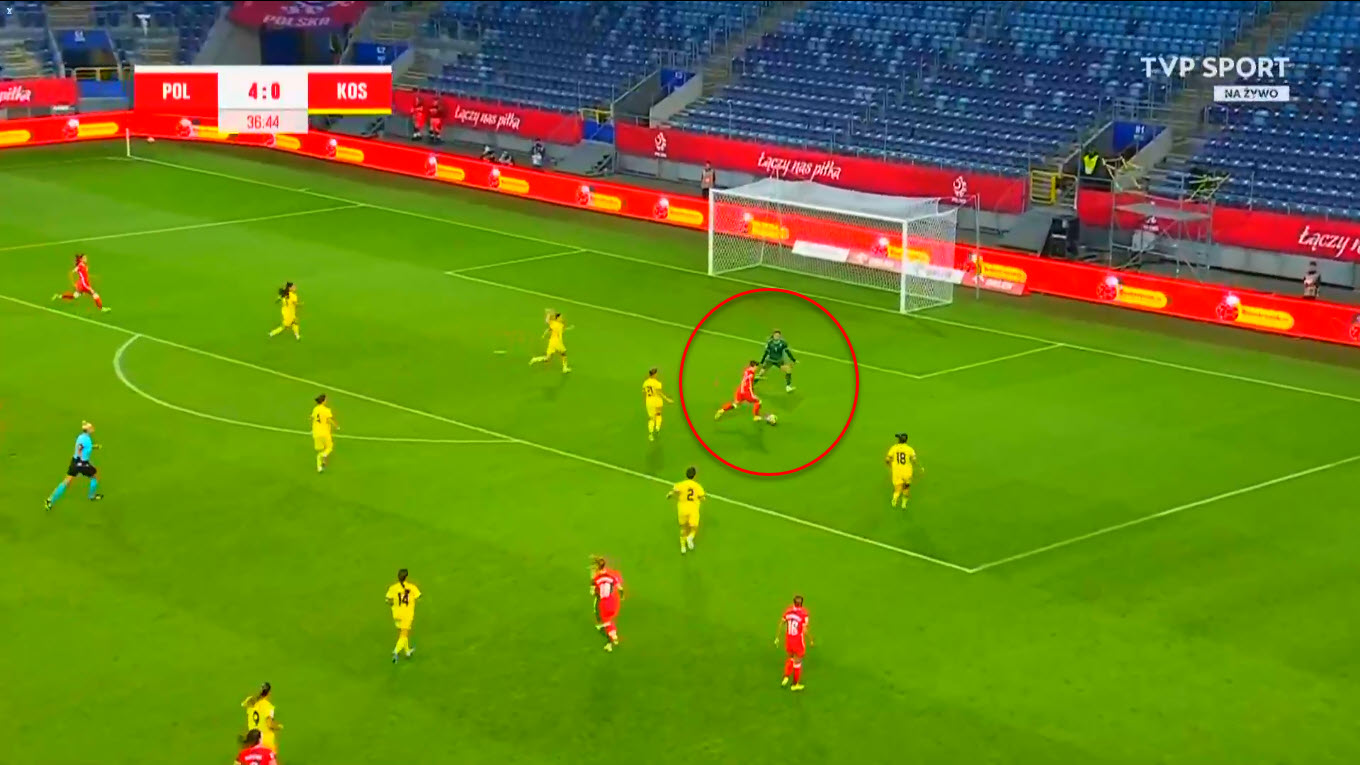 Pajor has also scored using her left foot several times during her career and more importantly, her dynamism inside the box allows her to put an impact on passes that seem very difficult to catch or score.

In this example, she was running towards the goal and received a cross from the right wing. The ball bounced off the pitch when it was about to reach her and it was a little bit distant too. As a result, Pajor reacted immediately with a very quick sliding tackle to be able to touch the ball with the top of her foot and score a very difficult goal. And that proves the player’s worth as a striker even further. 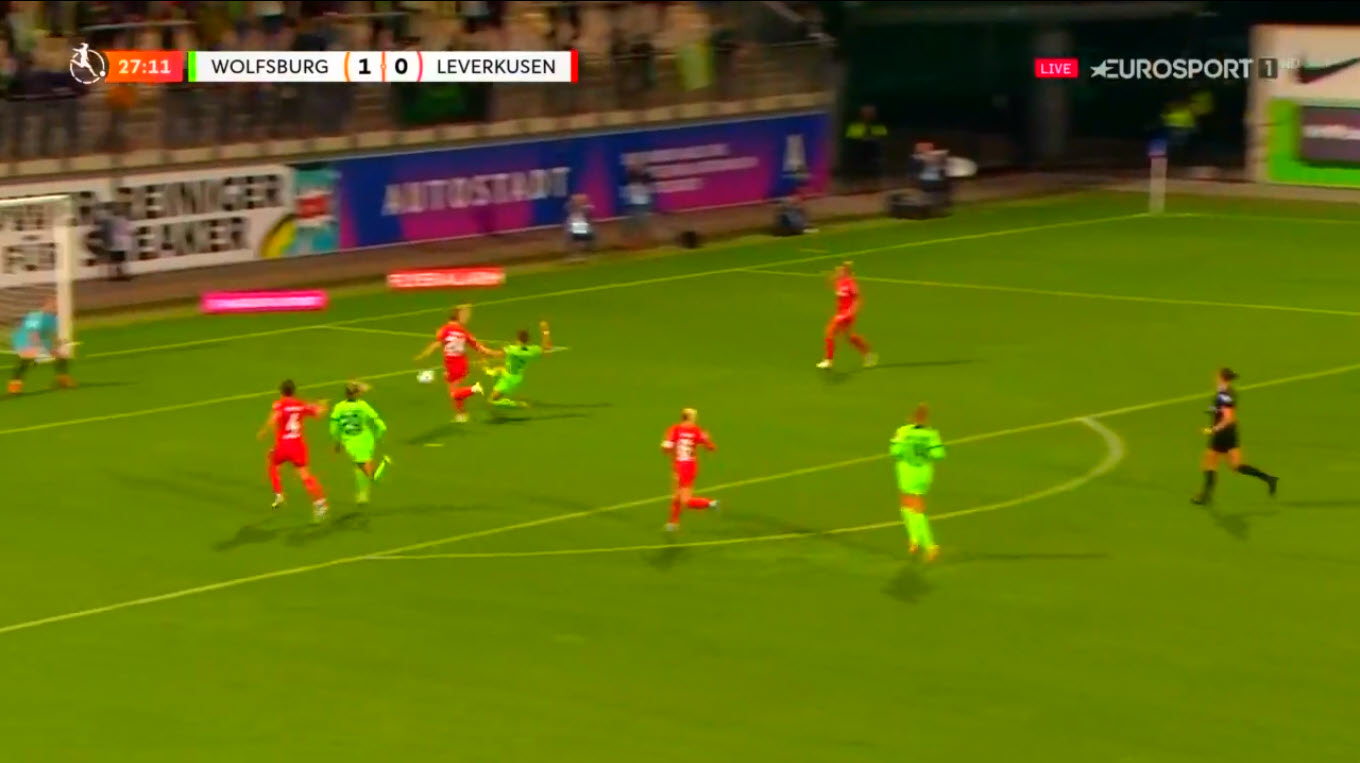 When it comes to playmaking, the statistics say that she has 69.6% in terms of passing accuracy. But what the statistics cannot explain, is the fact that Pajor is a very unselfish player. And to find a striker who is not selfish is something rare. In fact, Pajor has proved numerous times that she is not an egoistic player who likes to score all goals by herself and avoid passing to her teammates even when they are better positioned to score.

On the contrary, she usually provides assistance to her teammates whenever she feels that they are better positioned to score. Sometimes, she even passes when she knows that she can score by herself. As the example shows, she was in front of the goal in this action but preferred to give the ball to her teammate as she thought that it would be safer to pass since she had two players disturbing her. 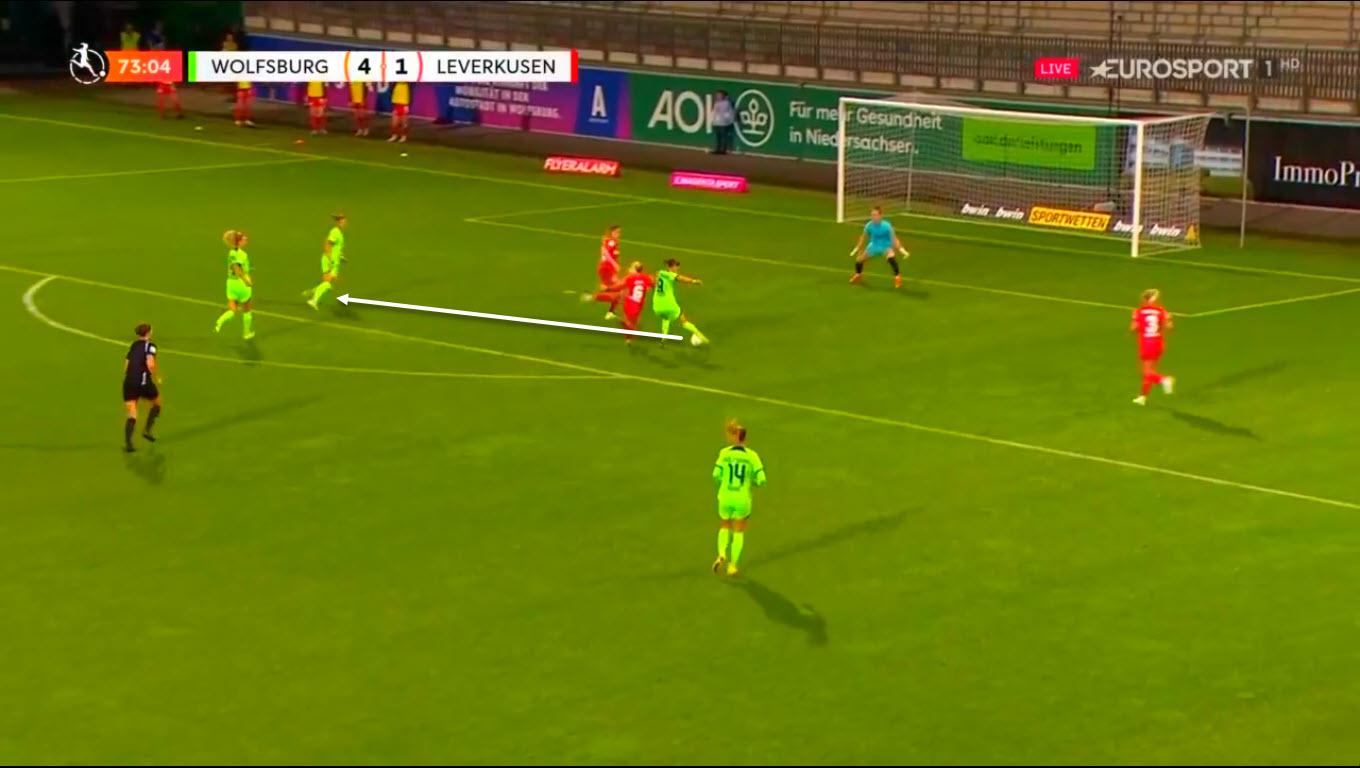 In addition to passing with her right foot, Pajor can also be decisive using her left foot to provide key passes inside the box. In the following chance, she went for a pass to her teammate with her left foot instead of going for a shot. And once again, this proves that Pajor is a team player and not an egoistic striker since she could have shot the ball with her right foot towards the far corner. 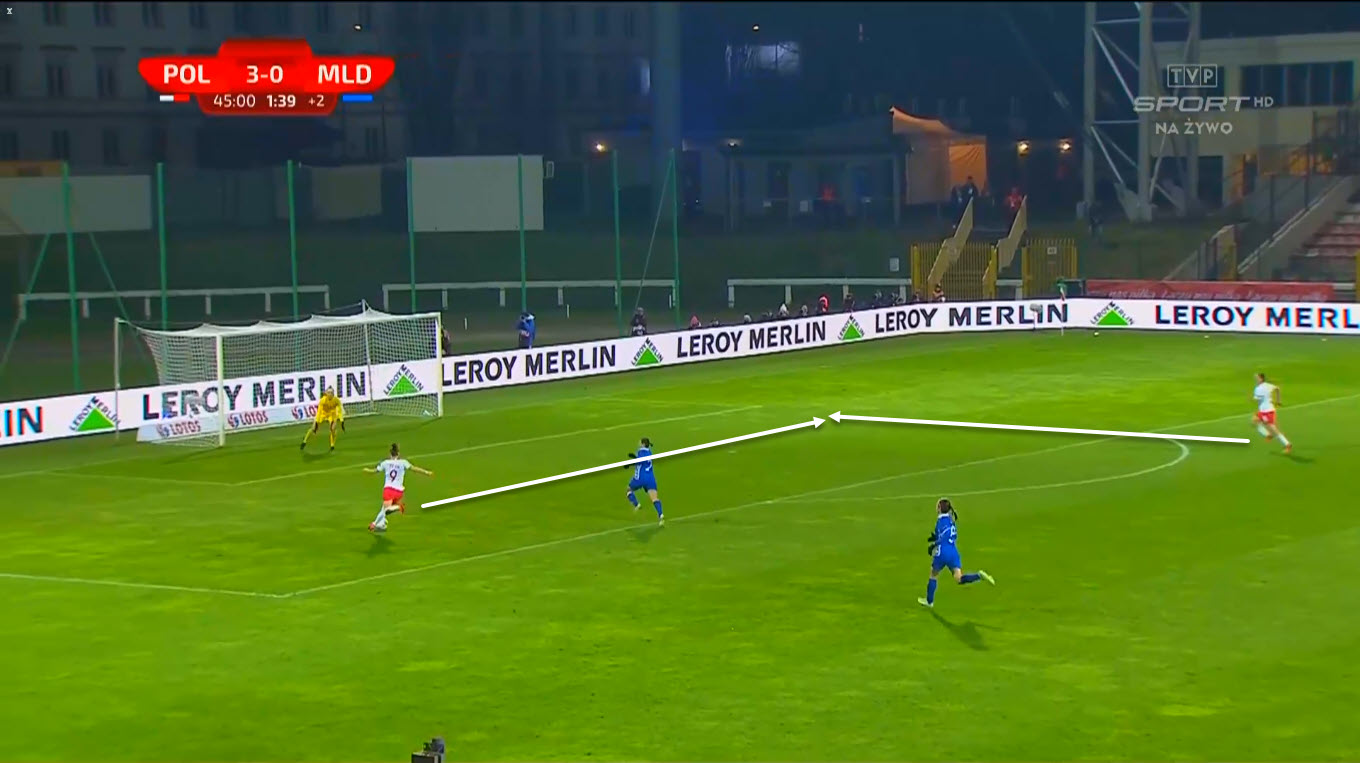 Pajor is one of the underrated strikers in Europe and the media doesn’t really focus a lot on the Polish striker and that can be due to her playing in the Frauen Bundesliga. That’s why it was important to shed some light on her and explore her goalscoring and playmaking abilities, knowing that with more experience, she can become an even more accomplished player and an even more clinical finisher.