Following his transfer away from Portsmouth in August 2018, Conor Chaplin has gone from strength to strength. This tactical analysis will assess Conor Chaplin’s impact at Barnsley and the tactics he uses. Despite languishing in the relegation zone, Barnsley‘s Conor Chaplin is the in-form forward in the league and has proved that he can hold his own in the EFL Championship.

Having spent a short spell at Coventry before signing for Barnsley in Jul 2019, Chaplin was brought into the Barnsley team as a centre forward. He was played in wider areas at academy level but has found his home in a partnership in Struber’s forward line. His exceptional performances for Barnsley in December 2019 earned him the coveted EFL Championship player of the month award.

Conor Chaplin’s greatest strength is his ability to beat the defender in one-on-one situations. Going forwards and in possession, he has the pace and the close control to get past the defender and drive towards goal. He has a success rate of 69% when one-on-one with 72% of these taking place in the attacking third. Despite stepping up into the EFL Championship, his success rate has been maintained demonstrating his progression in the offence. His abilities here are a testament to his development as a winger in the early stages of his career. It is this strength that sets him apart from other players in this position and gives him a creative streak; once he’s beaten the defender, he creates space for the Barnsley offence. 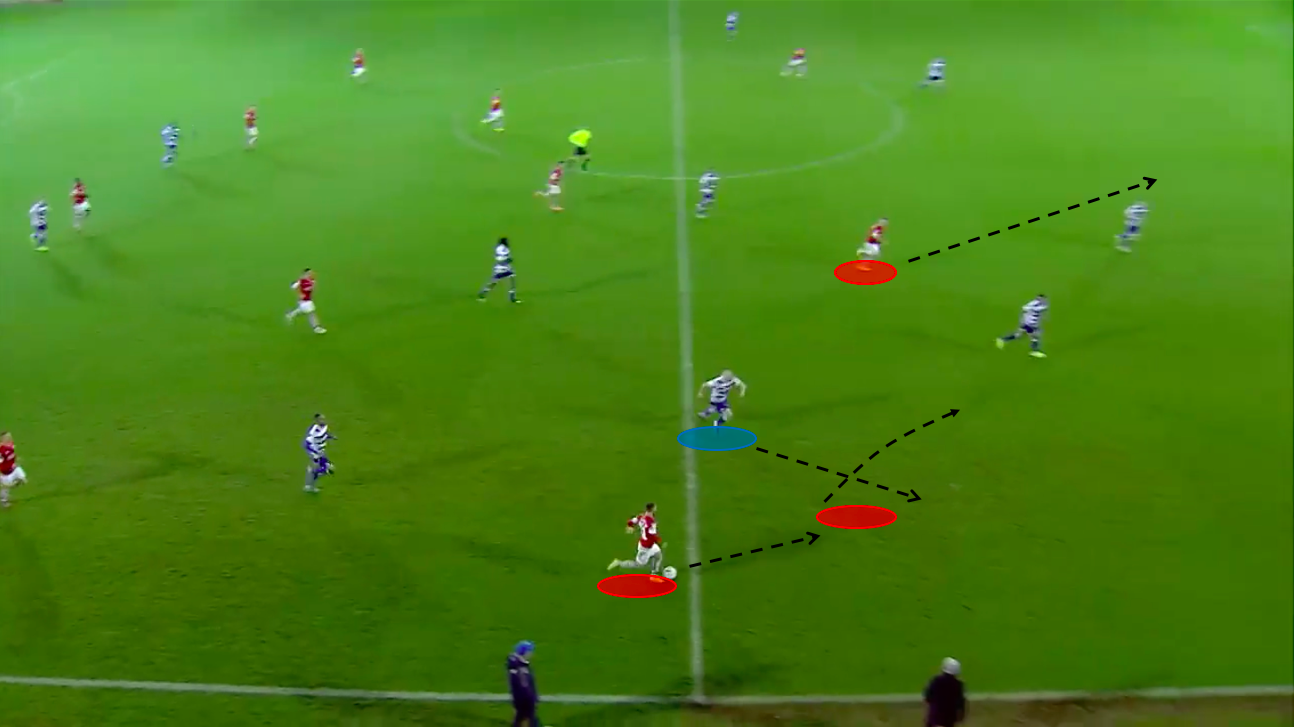 As shown, Chaplin initiates a counter-attack and is dribbling into the attacking half. Using his close control, he flicks it inside the defender as he crosses his path and runs into the central channel. From here, he attempts to thread a ball through to runner. This is an example of him supporting the play and creating attacking opportunities from deep. It is typical of his playing style that he looks for the space and creates time to pick a pass or take the shot. In this example, the ball is cut out by the defender but it did highlight Chaplin’s close control and blistering pace. 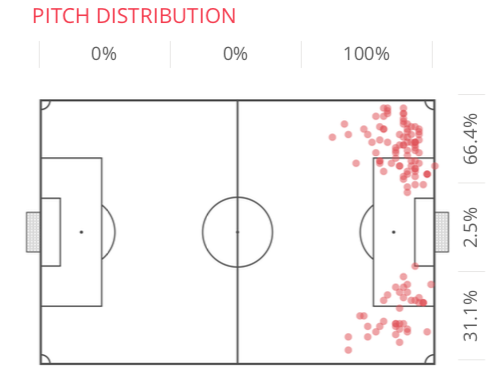 From wider areas, Chaplin has proven that he can deliver a quality ball. The data above shows the distribution of those crosses which shows that 66% of them have been from the left flank and the remainder coming from wide or central areas. This statistic shouldn’t be surprising given that Chaplin has a dominant left foot but it does highlight a slight weakness on the right flank. When cross-referenced with his one-on-one dribbles, it appears that he is more likely to cut inside than move out wide when finding himself on the right flank.

During the latter years of his time at Portsmouth, Portsmouth predominantly played with a 4-2-3-1 system which didn’t favour Chaplin’s style of play. Having found his position as a centre forward rather than as a winger, Chaplin would have played as a lone forward in both Paul Cook’s and Kenny Jackett’s teams. At 5’6”, Chaplin isn’t a classic centre forward who aims to hold the ball up, he is a running forward who more closely resembles an inside forward. Since Struber’s arrival at Barnsley, he has played a 4-3-1-2 which gives Chaplin a partner in the offence. He has greater freedom to roam and has excelled in this role, scoring nine goals in the last 12 fixtures. 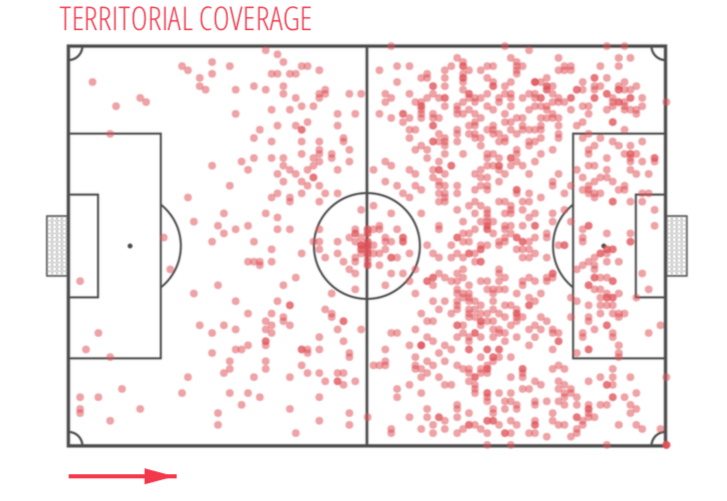 When used as a second striker, his territorial coverage is in both central and wide areas demonstrating his support play as well as his finishing. This further supports his preference for the left flank having supported play more from that area.

Struber has tended to favour four in the midfield in a diamond formation over the benefits of a 4-2-3-1. The deficit in the midfield would be a concern were Chaplin not as mobile as he is. His support to the midfield is good and is a result of his intelligence on the field. When the midfield need greater support, he will drop deeper to find space and support the offence. 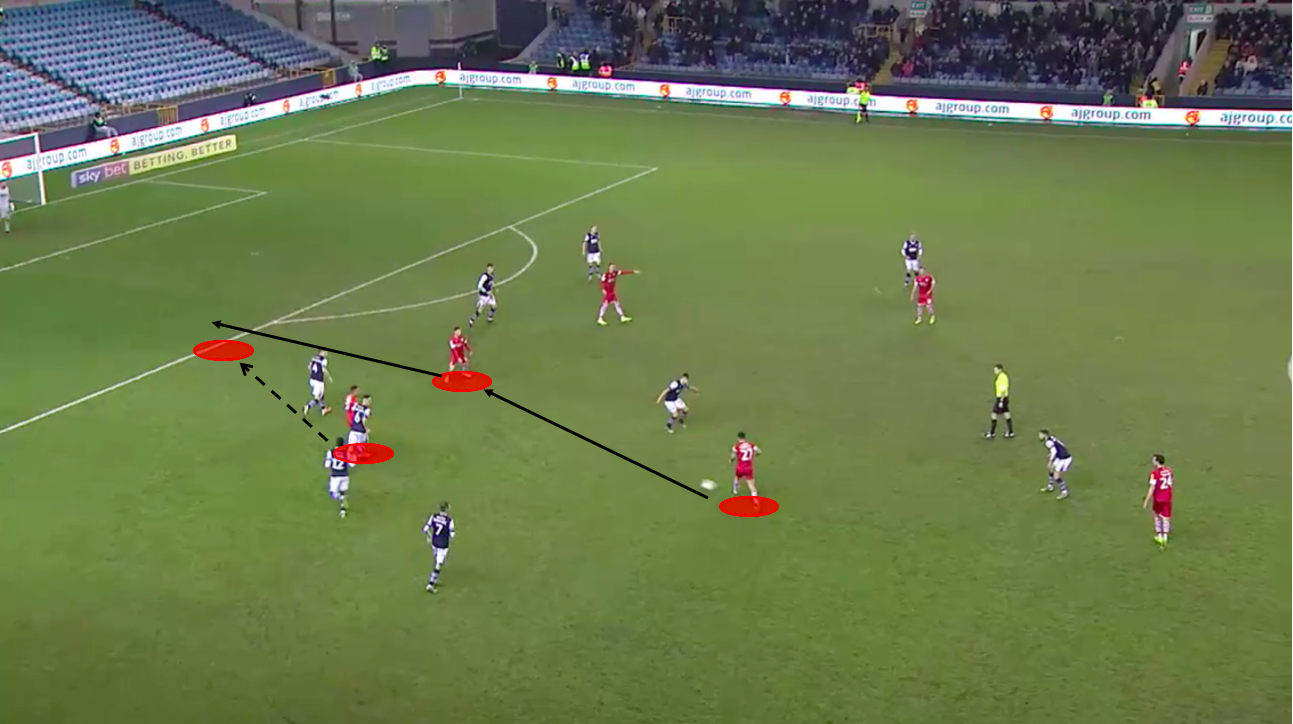 In the example above, Chaplin drops two yards from the defensive line and shows for the ball. His movement commits the centre half and creates a running channel for Jacob Brown. As the ball is passed into Chaplin’s feet, a deft touch with the back of his left heel pushes the ball into the path of the runner. His creativity and overall skill level as a forward make him a unique player in this position within this league. On his own, it is understandable that he didn’t have the success he now has. Playing alongside running forwards and being given more freedom is paying dividends for Chaplin’s overall game.

In a recent analysis on Struber’s tactics at set-pieces, Conor Chaplin was praised for his contributions at the corner. His tenacity to get into space is most evident at corners where he commits himself to block the defender from getting to the first ball and gambling on the second ball. Having scored two goals this season using these tactics, Chaplin has the ability to react to match in front of him – it is no accident that he is Barnsley’s leading scorer this season. 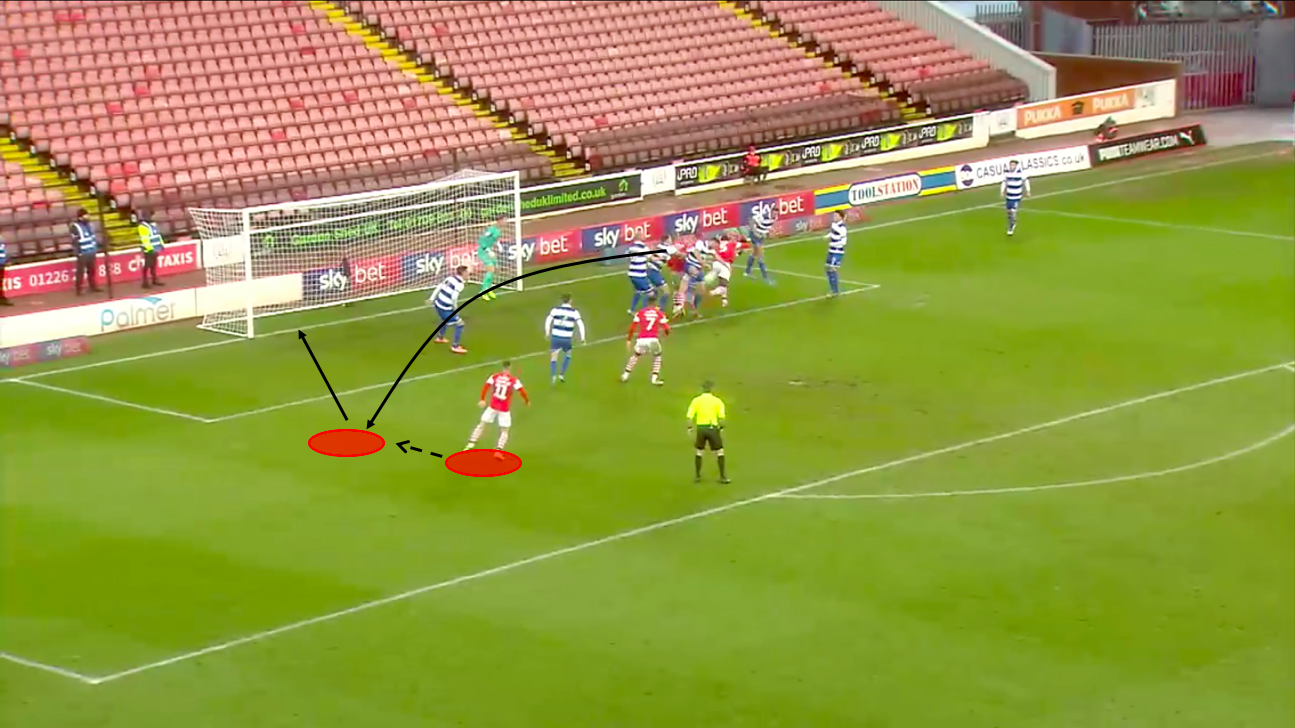 Chaplin has been used as a blocker for the set-piece and then moves into the space at the back post. His calculated gamble to occupy the space at the back post is rewarded as the ball is flicked through. As he takes control, he now has the time to pick the shot which he places high and away from the keeper. This was typical of Chaplin’s experience within EFL League One where he was more commonly used as a poacher for both Portsmouth and Coventry. His strength is in his positioning which is the driver for his goals scored within the six-yard box.

Since playing as a free-roaming forward in a front two, Chaplin’s game has expanded and given him more opportunities. His ability as a finisher is most impressive and has taken some by surprise. He was known for his small frame in the third tier of English football and pundits had all but written him off for EFL Championship football. Not only has he demonstrated his strength at this level but he’s a proven finisher, scoring five goals in six games in December. 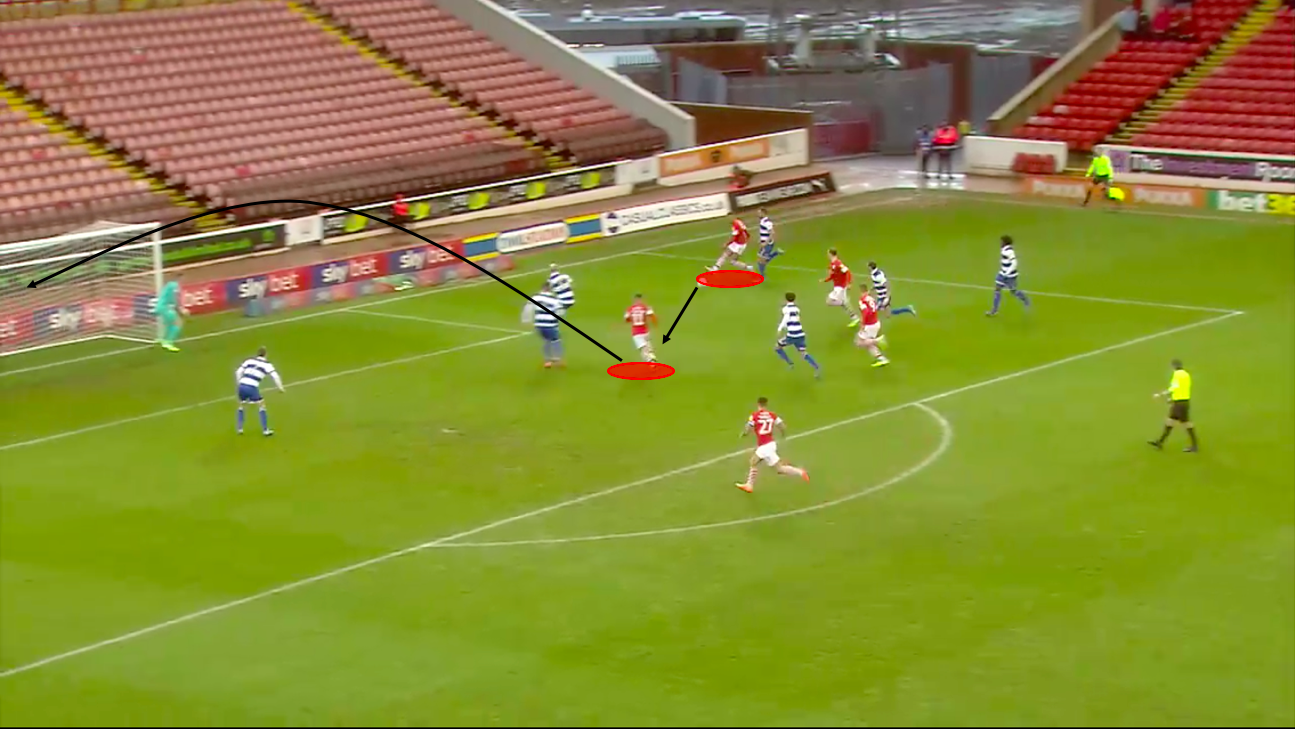 Chaplin holds his run as the ball arrives from a wide area. Not having much space and being at an acute angle, he opts for a lofted shot which clears the keeper and finds the back of the net. It was an audacious effort and demonstrates the confidence of the 22-year-old. The keeper isn’t able to get close and it is difficult to see how you defend against it. For a more traditional centre forward, their behaviour is more predictable. Were the defender to have got closer to Chaplin, it is likely that he would have taken a touch into space and shot from a more central area. 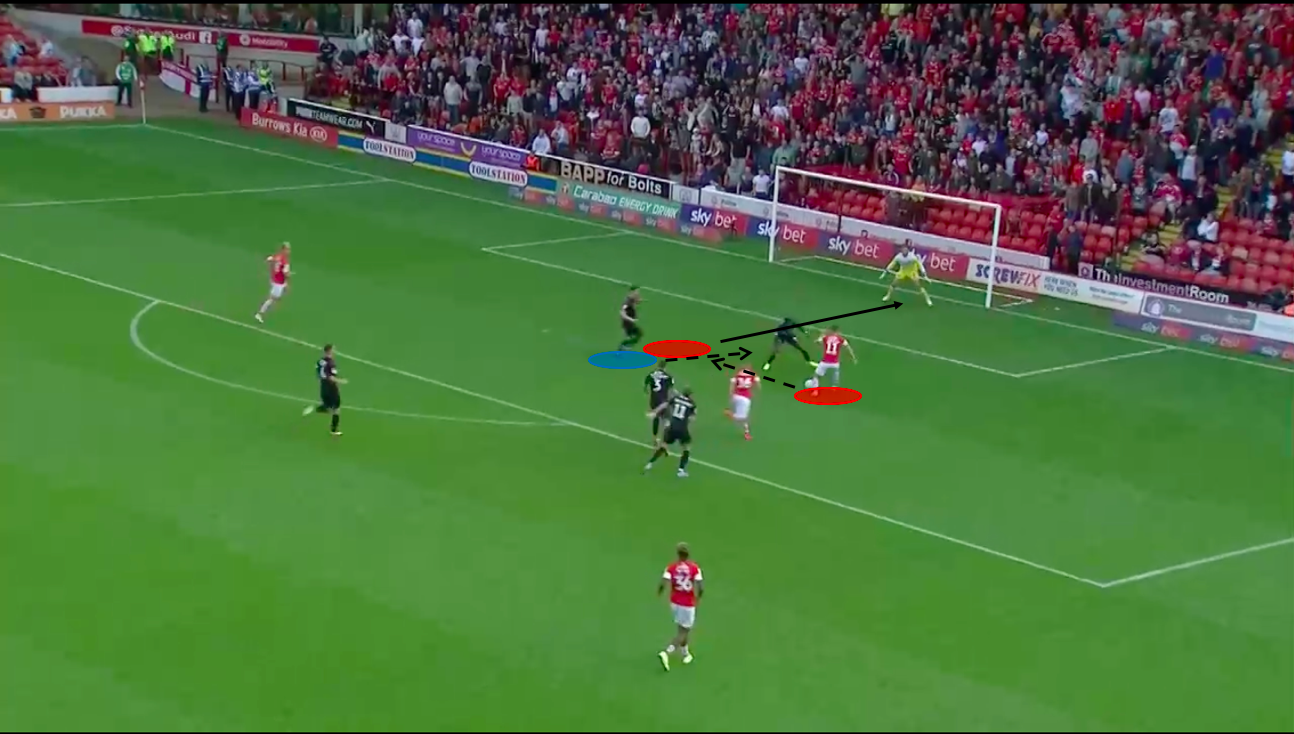 That skill can be seen in the example above where Chaplin moves the ball into space once the defender has closed the gap. His quick footwork shifts the ball left and he takes the shot through the defenders in an effort to block the keeper’s view. Reviewing the data about Chaplin’s on target distribution is fruitless because of his skills in moving the goalkeeper. His goals are disproportionately scored in central areas due to his quick decision making where he selects the area of best success. Both the above examples are scored in central areas and it is difficult to argue with his logic – superb finishes.

Few commentators would have picked Chaplin as one of the most successful forwards in the EFL Championship at the start of the season. This analysis concludes that Chaplin has thrived under Struber and has proven a worthy investment for Barnsley. His greatest attribute is his intelligence and decision-making skills that contribute to the creativity of the team. Combined with his finishing and his quick feet, he is a rare talent in the forward line at this level. Chaplin is doing something different to most forwards in the EFL Championship – he is an inside forward who can play centrally and is comfortable on the wing.