Gerhard Struber arrived at Barnsley from Wolfsberger AC having previously secured a third-placed finish for the Austrian side and gaining impressive results in the Europa League this season. Despite this, he arrived as a virtual unknown at Barnsley but having analysed Struber and his Wolfsberger AC side previously in the November edition of the TFA magazine.

Among many of the tactics discussed in the article, one thing that did stand out when analysing his Wolfsberger AC side was their focus on set pieces and the number of goals that were scored from them. This trait seems to have been carried across to Barnsley, who are beginning to have some success from set-pieces and have a number of routines and concepts which are used within their set-pieces. Having watched every corner under Struber this season, in this tactical analysis we will look at some of the best the set-piece routines used by Barnsley so far this season and analyse them.

Intelligent blocking and runs from deep

A common strategy in set pieces in order to lose man markers and create space is to block the path of an opponent. This involves one player making a move into the path of an opponent in order to allow a teammate to have a clear path towards space. This is a strategy which has been used often by Barnsley, particularly involving runners from deep. However, for blocking to be effective, space has to be created elsewhere and it isn’t as simple as just blocking opponents. There are several variables, as we can see in the example below.

Here, Barnsley (pictured in blue) position their players in a deep fairly central area. With the opposition taking a man-marking approach, the shape of the opposition is effectively decided by the attacking team, and so when Barnsley start towards the edge of the box, the opposition push up higher with them.

With an inswinging corner, the two players highlighted make quick diversion runs inwards towards the goal. Meanwhile, the player furthest left in the image stays still, for now, checking his shoulder for the players behind him who are the actual targets of the delivery.

When the ball is delivered, the player then moves behind, making a blocking run for the marker of the player in behind him. With the blockers marker focused on the blocker still, the opposition can no longer mark this player at the back post, and so if the delivery is good there is space free at the back post. Notice the shape of the opposition in the central area, where the structure is now extremely flat as a result of those previous diversion runs.

The player at the back post is able to meet the delivery, and due to those diversion runs mentioned in the first image, there is a central space for a cutback from the header. The blocker looks to be the target of the cutback, as he is set deepest within this space, but one of the players along the backline pushes forward and shoots with his back to goal. A well-worked set-piece that is so close to being a goal.

We can see a similar concept here within this set-piece, with a much bigger space at the back post. Here again a blocker moves from their marker and onto a teammates marker. The player makes the run towards the back post from deep but the delivery isn’t up to standard and is delivered into an area full of opposition bodies. It’s important that the blocker makes themselves look as though they are going to make a run and occupy a marker until the ball is about to be delivered. Otherwise, the opposition can quite easily spot what is a block and can react accordingly, but in a man-marking system, if done correctly, it’s incredibly difficult to react.

Again here, we can see a back post space opening up again as a result of Barnsley’s underload of this area. Here again, the target player is running from deep and is this time outside the box. This allows the attacking player more time and space to lose his marker and pick up some speed, and also because of the distance of the attacker from other markers, it makes him harder to track and react to as players aren’t focused on this player. The blocking player again here, number eleven Conor Chaplin, engages a marker to make the block non-obvious, but as we can see below he checks his shoulder to look at the movement of the target player.

The blocker Chaplin then moves forward just as the ball is about to be played, moving off his marker and into the path of the marker of the target player. The marker of the blocker is still occupied with the blocker and is unaware of the run being made by the target player. As a result, the space at the back post is open, but again, the delivery is flat and the goalkeeper collects the ball.

One of the defining factors behind Wolfsberger AC’s success from set-pieces was Michael Liendl, who has so far registered ten assists in the Austrian Bundesliga this season. Liendl’s deliveries from set-pieces allowed for these areas to be better targeted and Struber will be looking for his own Liendl at Barnsley.

In this final example, the cameraman on the game decides to make my job harder, but we can still see the principles of this well-worked routine. We can see the player on the edge of the box highlighted in red looks disinterested deliberately, as he is the target player in this corner. The blocker highlighted in blue again occupies a marker, and a diversion runner brings a marker towards the byline with him.

Here, instead of the blocker moving onto the target players marker, the blocker simply prevents the opposition from pushing out and leans into his marker. Because the diversion runner has moved an opposition player from a more central area, a passing lane opens up that can be exploited.

We can see this passing lane here, and another player moves across and dummies the ball in order to protect the ball in case the delivery is slightly off. The ball runs through and the player gets a shot off at goal and probably should do better. Barnsley probably could do a better job positionally from the shot, and diversion runs slightly wider in order to clear the path to goal would be useful, but as you can see, there is still a space to get a shot off at goal.

Another routine Struber seems keen on is the crowding the goalkeeper routine, but rather than crowding centrally they overload the near post. This routine and its advantages are fairly simple in nature, in that crowding so many players into a tight space limits the ability of players to jump and reach the ball, including the goalkeeper. And because of the proximity to the goal, any touch could divert the ball in. As a result of the tight, crowded area, this becomes more about height and strength than any kind of movement,  and so if you have physically dominant players that you back to win duels, this can be successful.

Unfortunately often the delivery again isn’t great at times and so Barnsley haven’t yet scored from this routine. This isn’t a particularly new routine, but in the Championship I think it is a smart one as at a lower level it may always be worth testing the goalkeeper and his ability to deal with this kind of situation. Liverpool, for example, use a routine similar to the one below against goalkeepers fairly small in stature, using it against Marc-Andre ter Stegen, Hugo Lloris, Jordan Pickford, and Claudio Bravo.

Within this routine, the possibility of second balls should not be ignored, and we can see here Barnsley position players on the edge of the box behind the flat line of players in order to maximise the chances of winning this second ball.

This unique routine was again one touch off being completed. Here a player comes short to receive the ball. The player doesn’t come too short though, as the distance between the two defending players must be kept in order to play the ball through. A player peels off the near post and looks to receive.

Meanwhile, a player at the edge of the box makes a run towards the near post player, looking to exploit the space in front of the back line. However, the lay off isn’t executed well and therefore no shot is conceded by the opposition. This is a routine I like and don’t think I’ve seen, but the quality has to be there to lay the ball off and to get a successful shot on target.

Barnsley’s goal vs QPR also included a similar routine to the back post as mentioned previously, but could have almost been a backup plan. We can see below the situation, with Conor Chaplin making a run towards the back post, with a partial block happening just in front of him in the image. It’s hard to tell if this was a block or just the player making a forward movement.

We can see the ball runs the whole way through and nobody can track Chaplin’s run from deep and he can smash the ball into the net. The ball seems aimed at the near post and runs through for Chaplin’s run, and so it’s hard to tell if the ball was aimed for the near post overload or the back post run. Either way, Chaplin makes a free run at goal and scores, so it is a success.

Barnsley haven’t had as many planned routines from free-kicks as they have for corners, but have still found some success.

We can see in this situation below the ball has been played short into a more central position. Notice how Chaplin who is highlighted signals for the ball to be played deeper towards the back post. As soon as the ball is about to be kicked, Chaplin makes his way round his marker and sprints towards goal.

Therefore when the ball is won at the back post, Chaplin is in an excellent position to receive the ball and score.

Here, Barnsley position a player wide out of shot to receive the ball in behind from a through ball. The man in the middle begins his run towards the goal to receive a cross while the free-kick taker makes his run-up for the first pass.

As a result of this being planned and thought ahead, the central player is able to get a headstart on his marker and can, therefore, receive the cross. Wolves have done a similar routine this season, but the goalscorer started their run in an offside position from the initial free-kick, which allowed for a great head start.

Struber’s focus on set pieces seems to be transferring slowly to Barnsley, and although they have limited success so far, they have an array of routines and clearly spend time focusing on them, as can be seen in this set piece analysis. Marginal gains like this are an important part of a team, and perhaps even more important for a side fighting for every point possible in a relegation dogfight in the EFL. This is the first of two analyses that I will be completing on Struber’s Barnsley, with a head coach analysis looking at Struber’s impact at Barnsley coming very shortly.

19-year-old tactical analyst and coach, set-piece consultant.
Follow me on Twitter @cam_meighan and feel free to drop me a message for any enquiries! 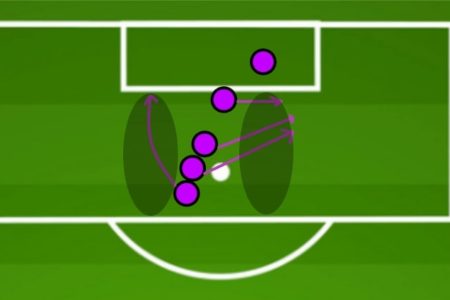 West Ham United have had a good season under David Moyes so far. After 17 games, the Hammers have 26 […] 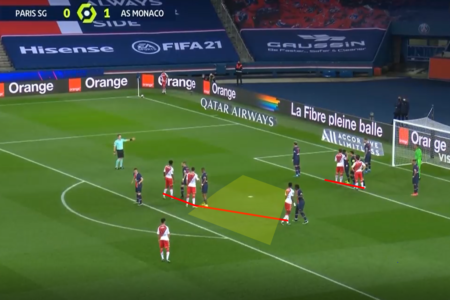 Set pieces: Analysis of the tactics which make Monaco one of Europe’s deadliest