Calvin Bassey has recently impressed on one of the biggest stages around Europe, helping Rangers reach the final of the UEFA Europa League in what was only his second season in professional football, and his first season of regular game time. This is a stunning story, considering the fact that Bassey only signed for an academy at the age of 16, joining Leicester City after impressing on trial for the club.

After five years at the club, he left on a free transfer and joined Rangers at the age of 20. In his first season, he played a bit part role in the journey to winning the Scottish Premiership. Bassey’s breakout season came in 2021/22, where he made 50 appearances in all competitions. These performances caught the attention of Ajax, who were willing to spend around £20 million to bring him over to the Dutch capital.

Having only spent two seasons in senior football, Bassey is playing as a central defender for one of the biggest clubs in Europe and will have high expectations to live up to. Players in Bassey’s position usually reach their primes at a slightly later age and so the fact that Bassey is playing at such a high level so early shows just how promising he is.

This tactical analysis will come in the form of a scout report to show what makes Calvin Bassey stand out as a 22-year-old. The analysis will highlight the skills Bassey possesses that make him so strong both technically and physically and why he can go on to become a great central defender in the future. We will also look at how he has slotted into the tactics used at Ajax.

During his last season at Rangers, Calvin Bassey started equal amounts of games at both left-back and centre-back. His versatility is helpful, although his preferred position is in central defence, where he has been playing this season for Ajax.

As seen below in the heat map, Bassey starts games as the LCB and has the ability to cover the channel, with dark shades being prevalent across most of the left flank of his half. Calvin Bassey is 185 cm tall, combined with a weight of 76kg, which means that Bassey has a towering presence over his opponents with his lean frame allowing him to stay mobile. 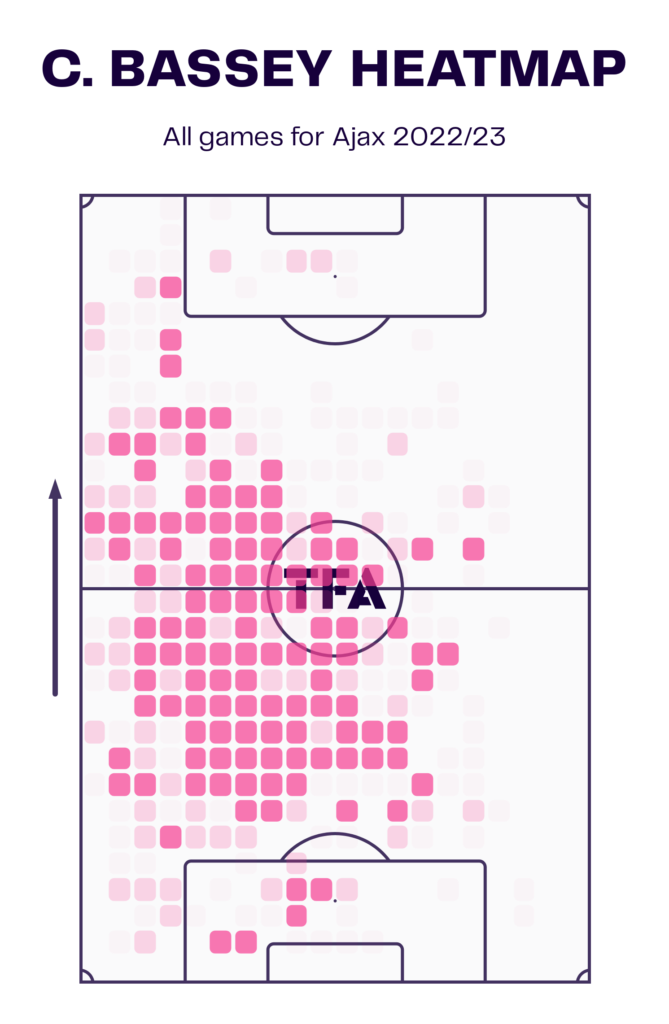 Coming into a total football culture at Ajax, it is clear that Bassey has to be comfortable on the ball in order to break his way through into the team. Bassey is very comfortable on the ball and has thrived in a possession-heavy system where he gets lots of touches on the ball. The pass map below shows just how many passes he has made despite only appearing in six games for Ajax. Bassey allows Ajax to shift defensive blocks from side to side, and open up passing lanes to play through. 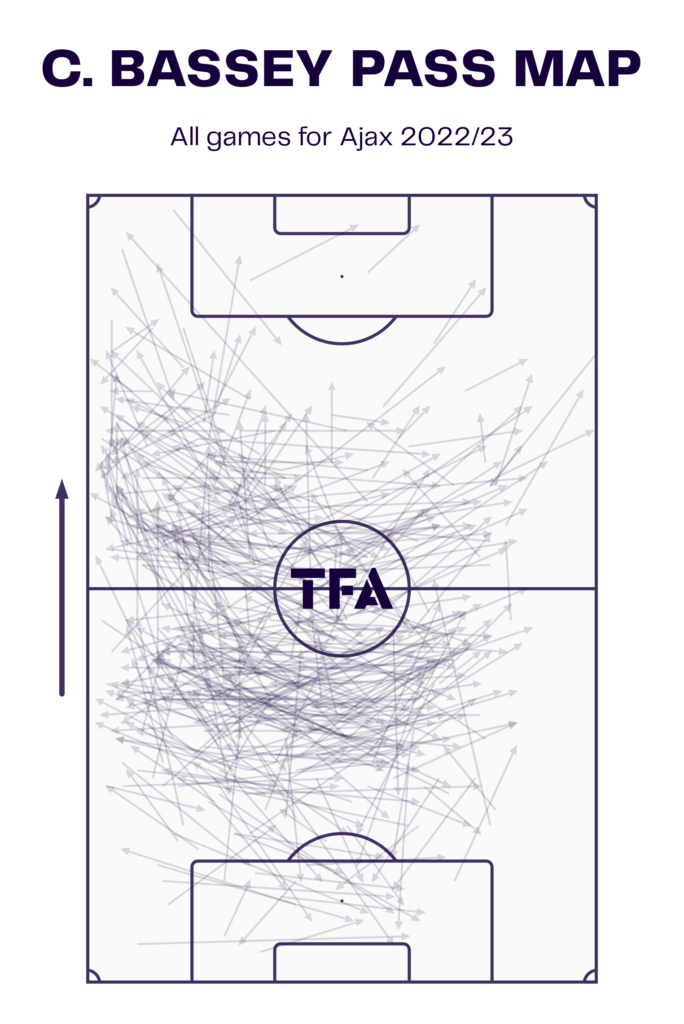 One of Bassey’s biggest skills is his ability to generate new passing angles for himself by manipulating the ball with his quick feet. This skill provides Bassey with numerous options to find teammates and makes it difficult for opposing players to press him. As shown in the image below, Bassey pretends as if he is about to play the ball, luring the defender into overcommitting, before shifting the ball onto his right foot and having a clear passing lane to the left back. 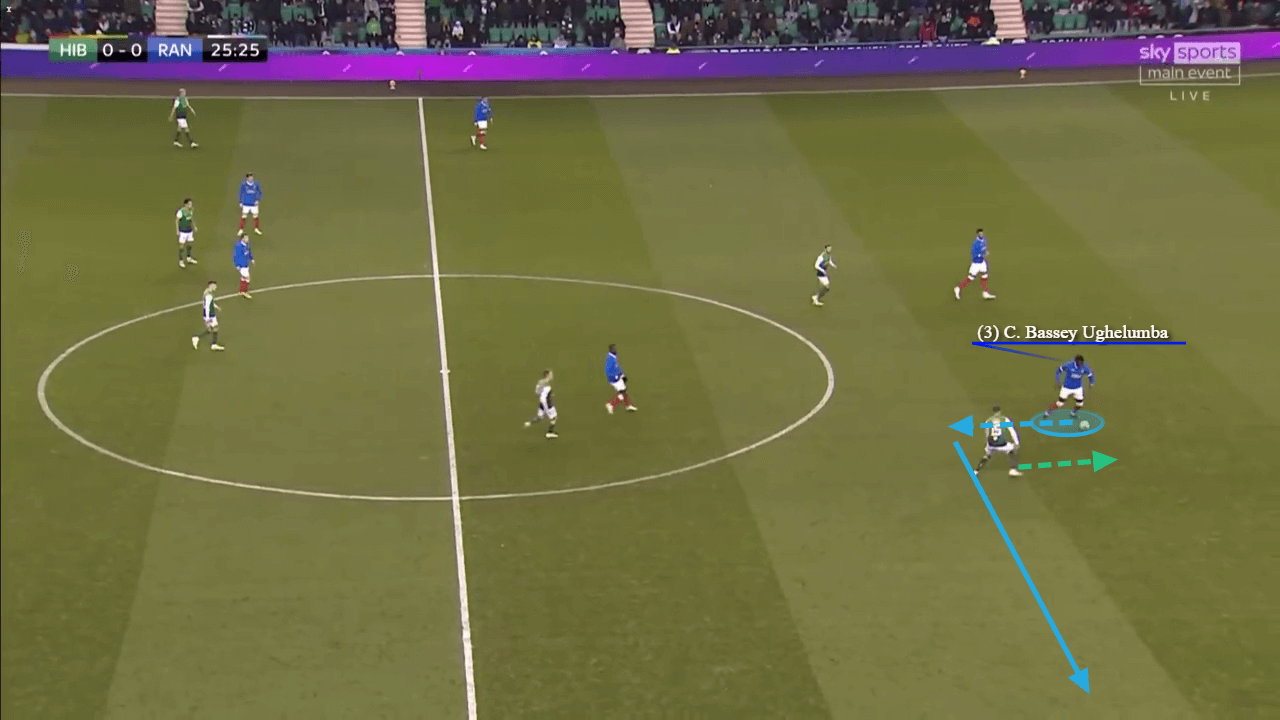 Another skill that helps Bassey be very influential from centre-back is his ability to carry the ball past pressure into midfield zones. His ball-carrying ability makes him very difficult to press, and if he is pressed, he can glide past opponents and create overloads in midfield areas.

The 22-year-old’s brilliant dribbling ability helped make him a versatile option for Rangers where he often played at left-back and he was comfortable playing in higher areas up the pitch. In a wide area, there is less jeopardy if you do lose the ball, so Bassey could afford to take the risks when dribbling further up the pitch. The image below displays his ability to evade pressure, by skipping through two opponents and drawing a foul when surrounded by four players. 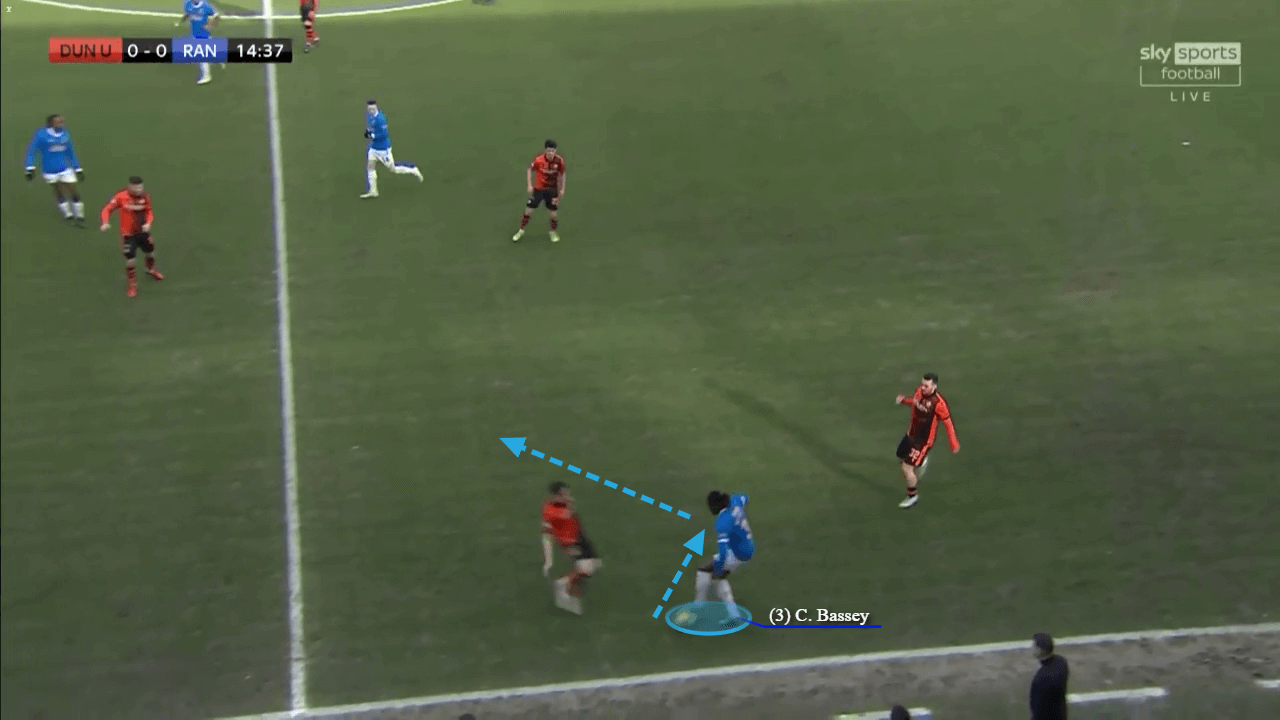 Below, you can see another example of Bassey’s brilliant ability to evade pressure by performing a roulette which takes three players out of the game. Bassey performs skills unlike many other defenders, which can perhaps be attributed to his time at a futsal academy during his teenage years. This has allowed Bassey to come up with creative methods of beating pressure, even when his physical frame makes him seem stiff. 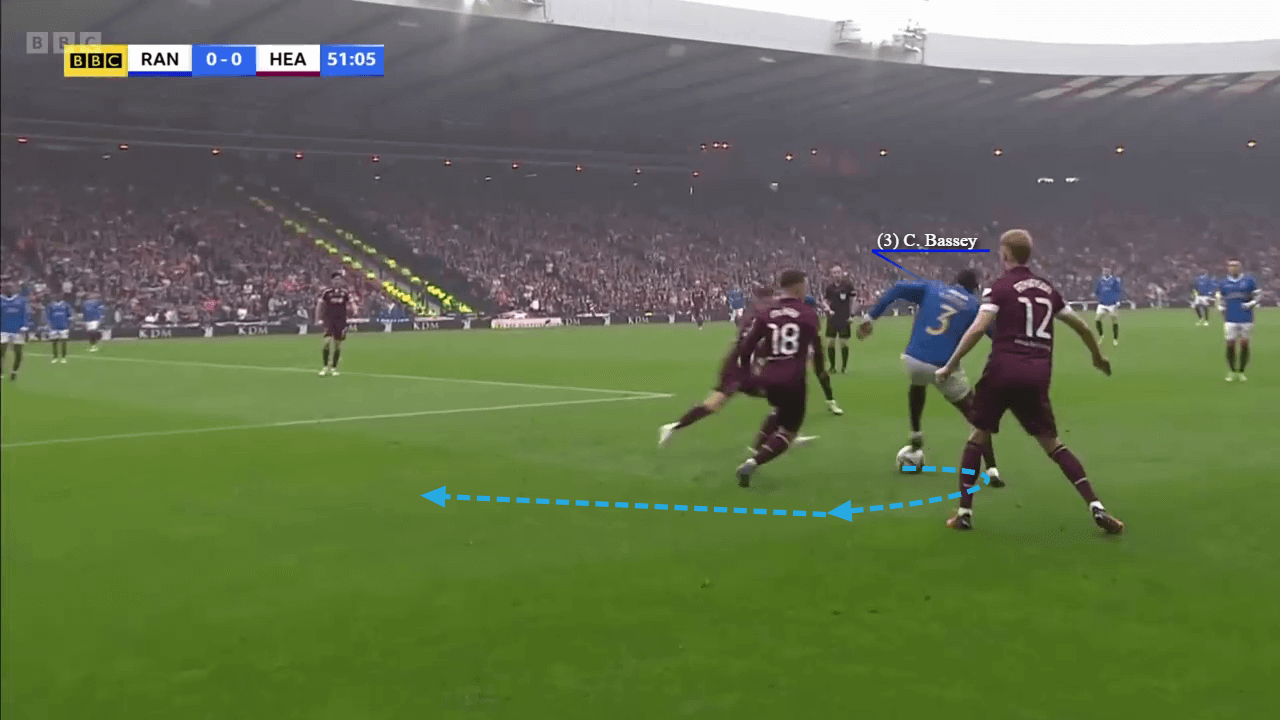 Another aspect which makes Bassey so tough to press is his ability to turn effectively either way. Bassey’s turning radius while dribbling allows him to evade pressure, no matter where he is pressed from. Defensive players can sometimes be too one-dimensional, where they prefer to dribble to one side and it can become quite predictable for opposing teams to press. However, Bassey has proven that he can turn either way, making him difficult to press, thus allowing his teams to play a braver style of football. 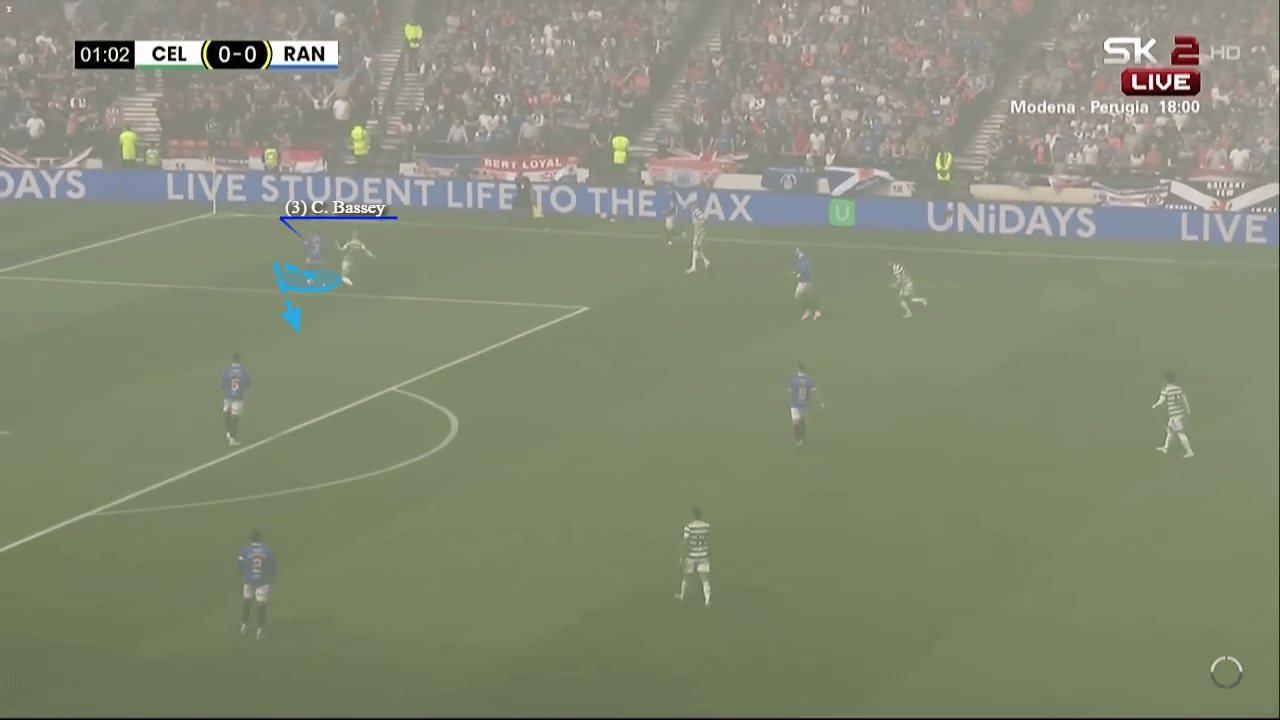 While Ajax do play a short passing style, based on maintaining possession of the ball, there are times when opposing teams leave players further up with lots of space and time. On these occasions, players responsible for the build-up, like Bassey, must have the skill set to find the open players and unlock defensive structures with one pass. The image below shows Dusan Tadic getting onto the end of a long diagonal ball over the top by Bassey. He perfectly picks out Tadic, who was in acres of space and allows Ajax to begin another dangerous attack. 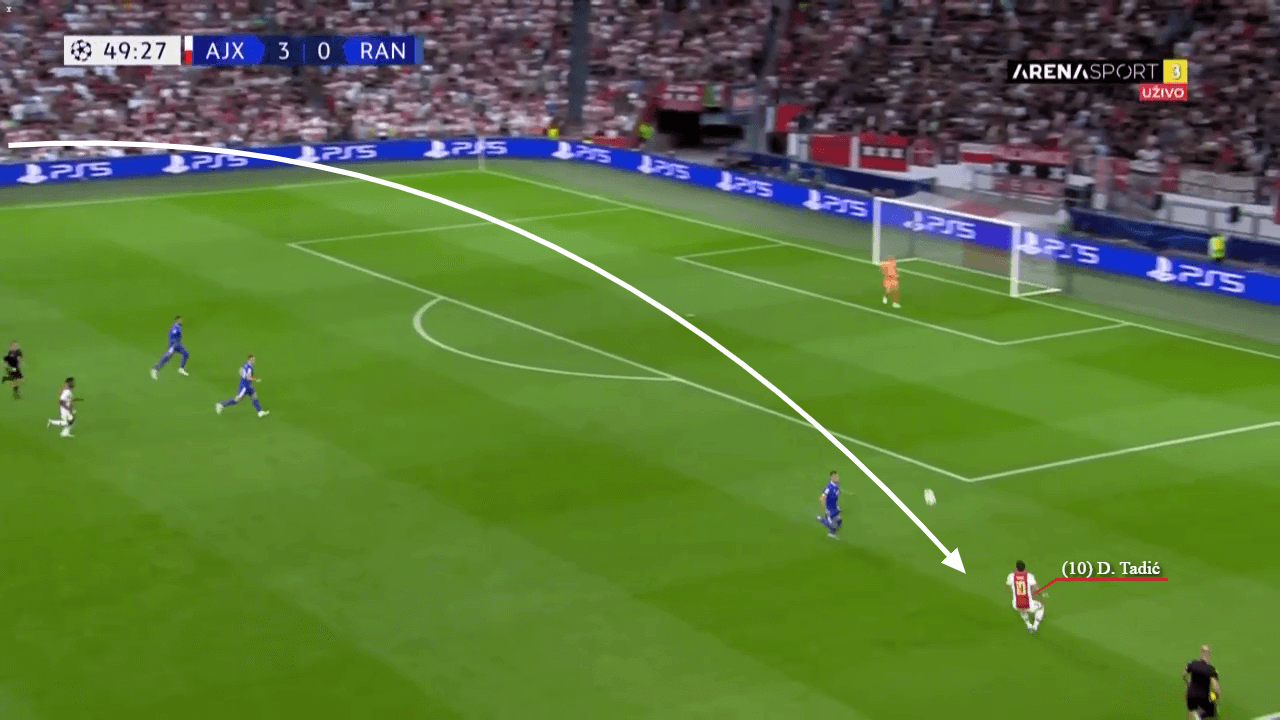 Calvin Bassey is a towering figure, and he is able to cover large amounts of ground with ease to make defensive contributions. The image below displays Bassey’s ability to make defensive contributions all over his half and even in higher-up areas when he is involved in the team’s press. The two lines across the half also show the average height of the defensive line, which tells us that Bassey is comfortable at playing in a high line, where he is not so close to his own goal. 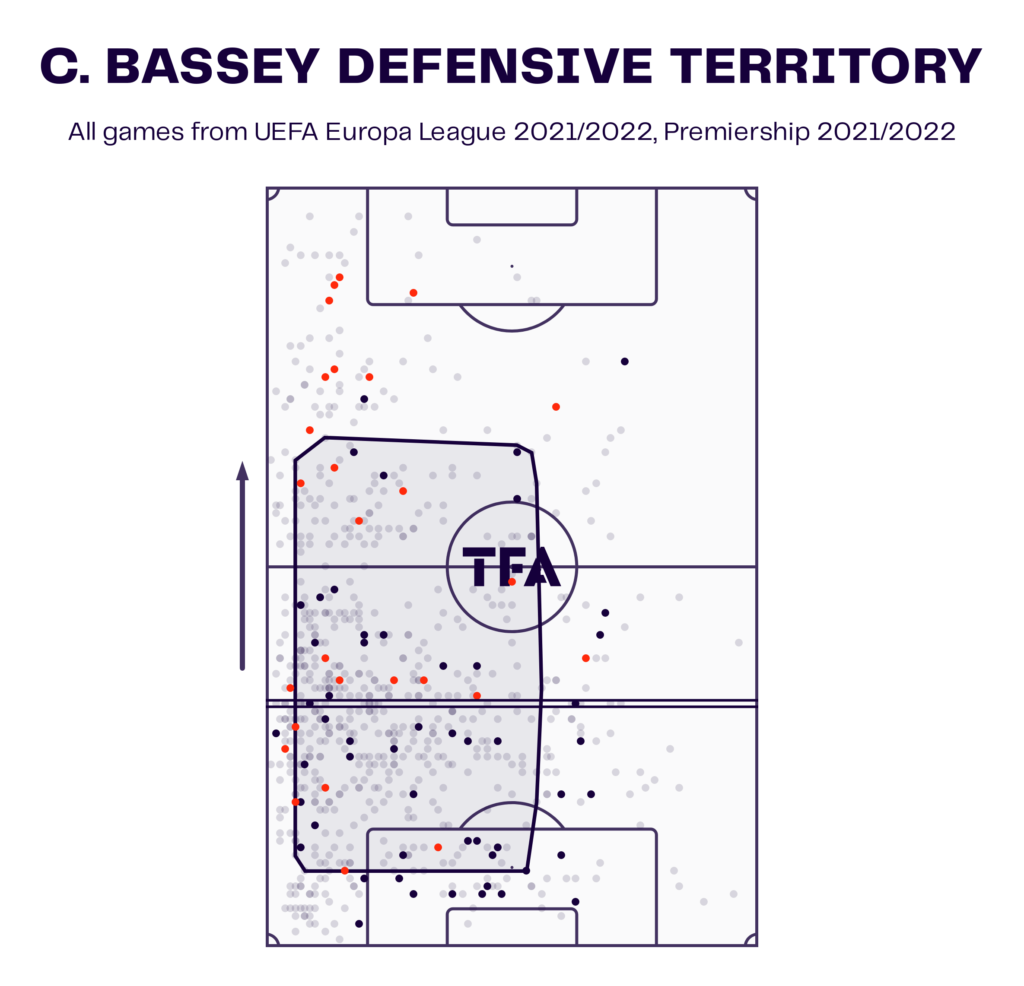 What makes Bassey such a strong defender, is his amazing ability in 1v1 defensive duels, especially in wide areas. Bassey has consistently proven his skill by squaring up to defenders and preventing them from getting closer to goal. Something which can be seen commonly in Bassey’s game is his ability to delay attacks, and when a player attempts to get past him, Bassey has the agility to be able to react quickly to changes of direction.

Bassey also uses his long legs to cover larger amounts of distances, with less effort, which allows him to easily keep up with quick wingers who constantly run at him. Furthermore, Bassey uses his large frame to step across defenders if they do manage to knock the ball past him. When Bassey steps across an opponent, he prevents them from getting onto the end of the ball, and once he starts shielding the ball, it is impossible to get around him and dispossess him. 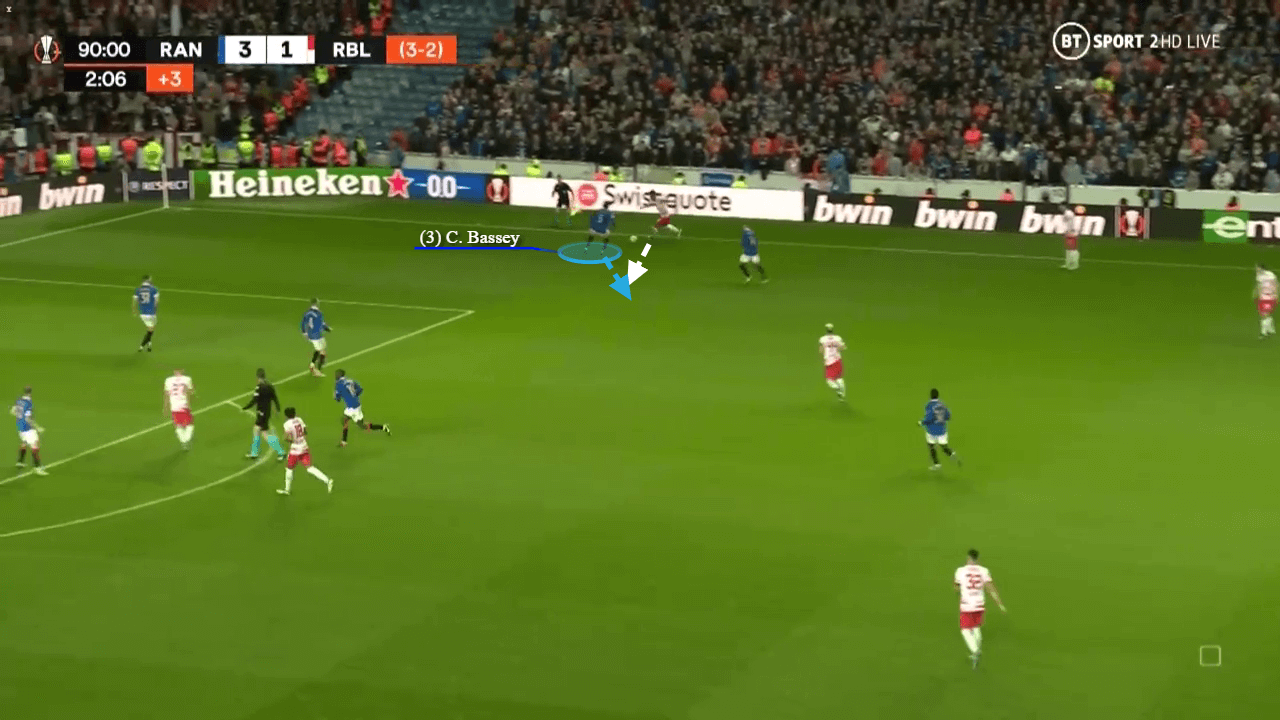 Calvin Bassey is a very proactive defender, which means that he usually tries to intercept passes and prevent attacks from ever reaching his third. While this is a good trait to have for certain defenders, Bassey has displayed at times a poor ability to judge passes, although this is something which can be forgiven considering it is his second season in senior football where he is a regular starter for his team. 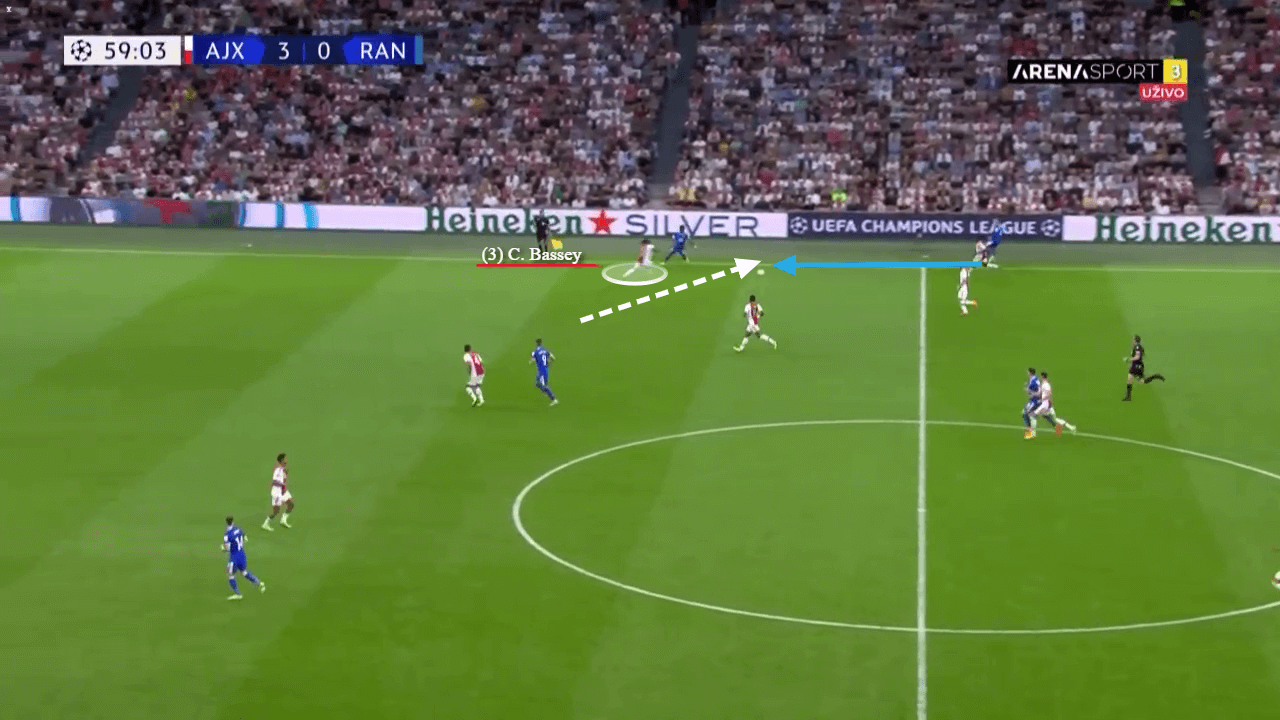 One final aspect which makes Bassey a strong defender, and something which is helpful for attacking sides with large amounts of ground to cover is his ability to recover back into position due to his pace. His speed and his long limbs allow him to keep up with attackers and prevent them from getting onto the end of balls in behind.

This image below displays how Bassey can keep up with opposition players before making a last-ditch attempt at clearing the ball away from danger. While it is preferable to stop attacks before the ball gets in these situations, having the recovery pace to bail you out when you are in trouble is a good skill to possess. 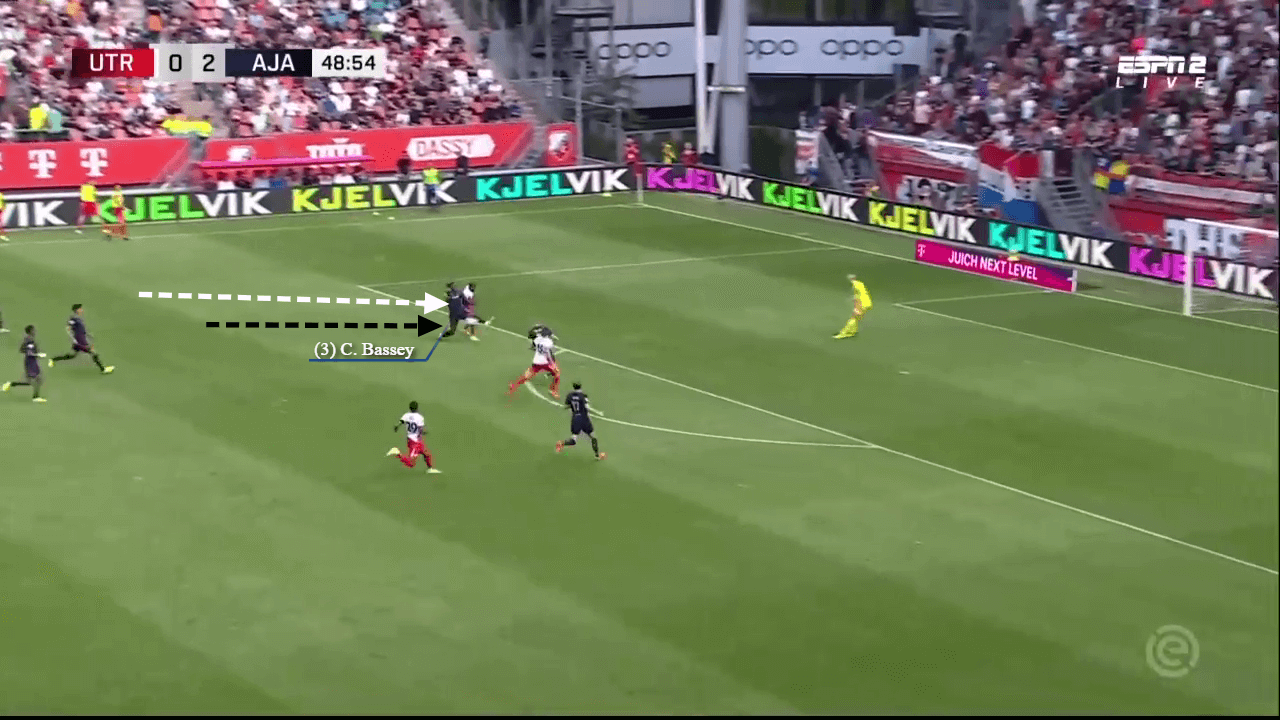 Areas to improve on

At the age of 22, it is naive to expect central defenders to be the finished package. One skill which can take time to build up is defensive awareness and judgement. Bassey must also improve on his defensive positioning when playing in a high-pressing system. At times, like in the picture below, Bassey starts too deep, and by the time he gets close to the attacker, the ball is already played past him and he becomes non-existent in these scenarios. He needs to work on his ability to judge the flight of the ball so that he can drop when there is no chance of winning the ball back at times like this.

Bassey usually attempts to engage in duels with opposition attackers, even when there is no chance of success. The young Nigerian defender must learn to read these situations better, and the platform on which he is learning at is sure to help him gain the experience to become a complete defender in the coming years. 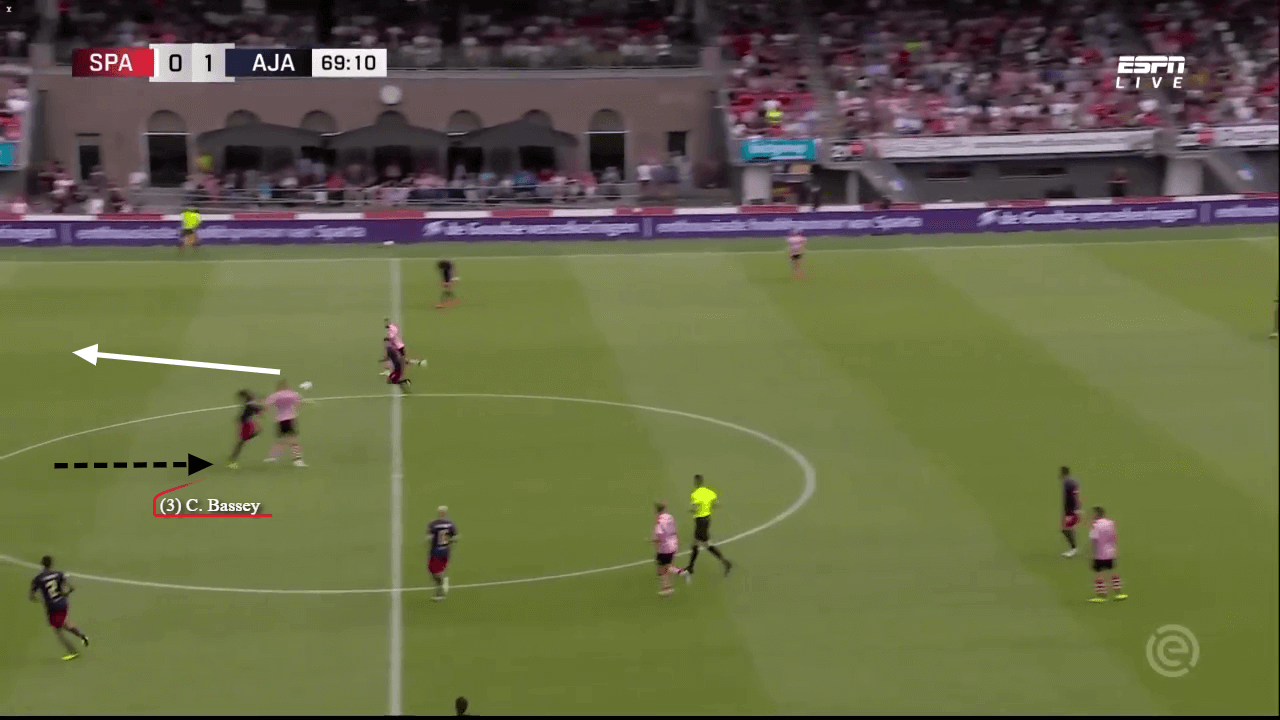 Below is another example of Bassey not being aware enough, and by the time he realises he should engage in an aerial duel, there is no chance of winning the duel and he has left lots of space in behind him. Calvin Bassey has also at times struggled in the air due to his inexperience. Bassey has the physical size to hold his own in aerial duels, yet, his poor timing in when to jump for the header has made him look weak in the air and something which others can target for the time being.

Nevertheless, there is no doubt that these flaws are ones that he can iron out in the years to come, and having so few flaws at such a young age is a very positive thing for the Ajax centre-back. 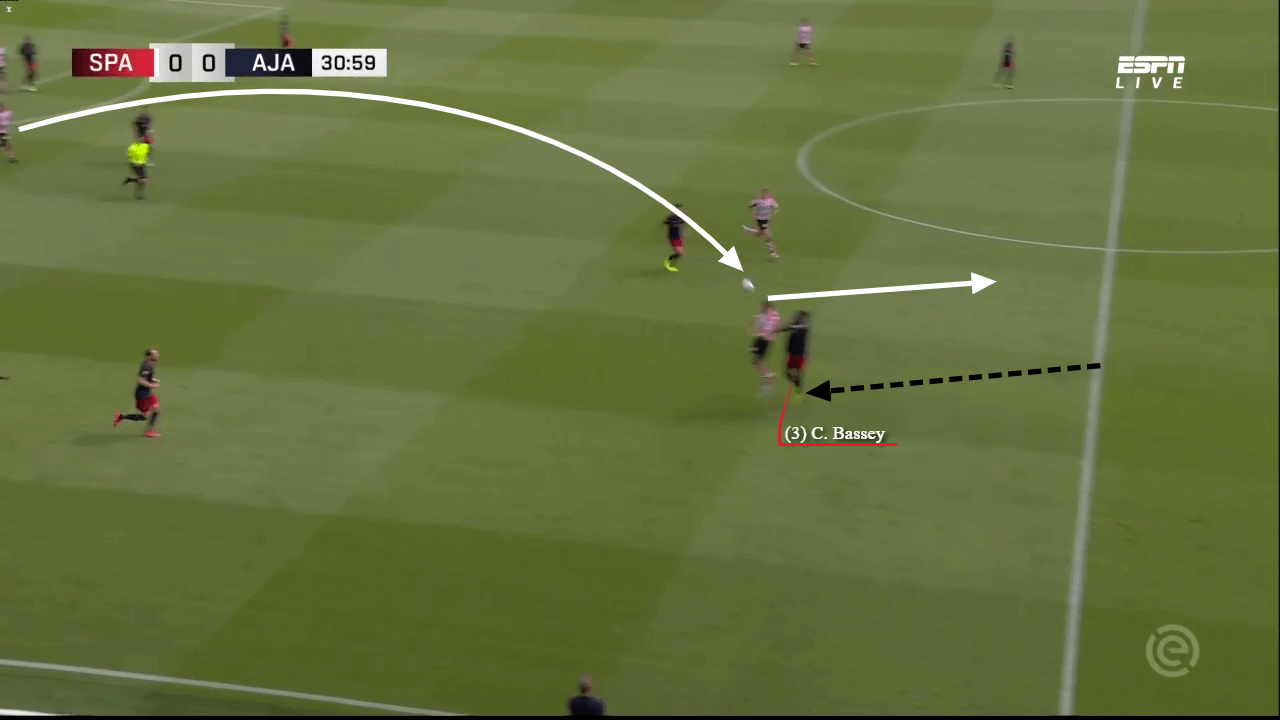 This scout report has displayed the reasons why Calvin Bassey has shot up the ranks after not even playing a regular starter at this point last year. Bassey has all the on-ball skills, and physical strengths to thrive as a central defender, but needs time to gain experience in the position. This is relatively new to him, after spending extended periods of time at left-back.

Patience is required, something which he will get when playing for a strong team and surrounded by experienced heads. In the future, if Bassey learns from his experiences, it is easy to see Bassey maintain his status as a UEFA Champions League player and become another of the new generation of ball-playing defenders, who can thrive in the fast-paced environment the game is heading towards, with brave pressing and front footed defending required. 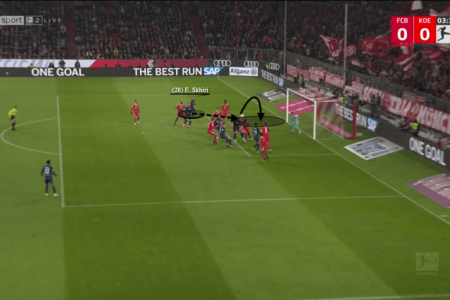 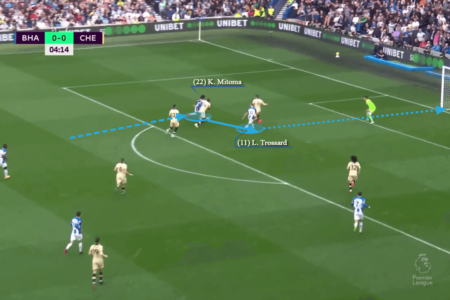 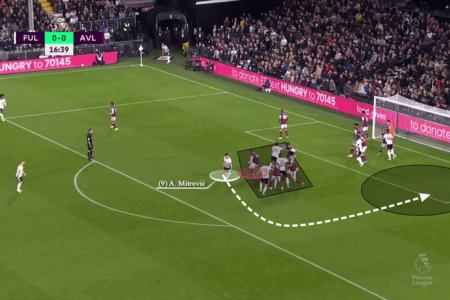