Washington Spirit needed this win a lot since they need to collect the most possible number of points in the upcoming games in order to battle for a playoff place. With this win, they are now holding 10th place and they will need to work a lot more in order to achieve their seasonal goals.

On the other side, San Diego Wave couldn’t dream of a better start to their NWSL debut season since they are actually holding the third spot with 31 points and just one point separates them from Kansas City who are holding the top spot, even though the latter are yet to play a match in comparison to San Diego Wave. This means that San Diego Wave will not have problems guaranteeing a spot in the playoffs especially if they continue winning points. They also have the possibility to qualify directly to the semi-finals if they finish at one of the top two spots.

In this tactical analysis article, we will cover both teams’ attacking performances and explore how both teams were able to score many goals while also pointing out their defensive errors and the mistakes they made in terms of tactics in general.

But first, the analysis will begin with the introduction of lineups. Albertin Montoya, Washington Spirit’s interim head coach, preferred to start the match according to the 4-2-3-1 formation with Aubrey Kingsbury as a goalkeeper, Camryn Biegalski, Amber Brooks, Sam Staab and Anna Heilferty in defence, Jordan Baggett, Julia Roddar as central midfielders, Trinity Rodman and Tara McKeown as wingers while Ashley Sanchez was the advanced playmaker behind Ashley Hatch who played as a striker. 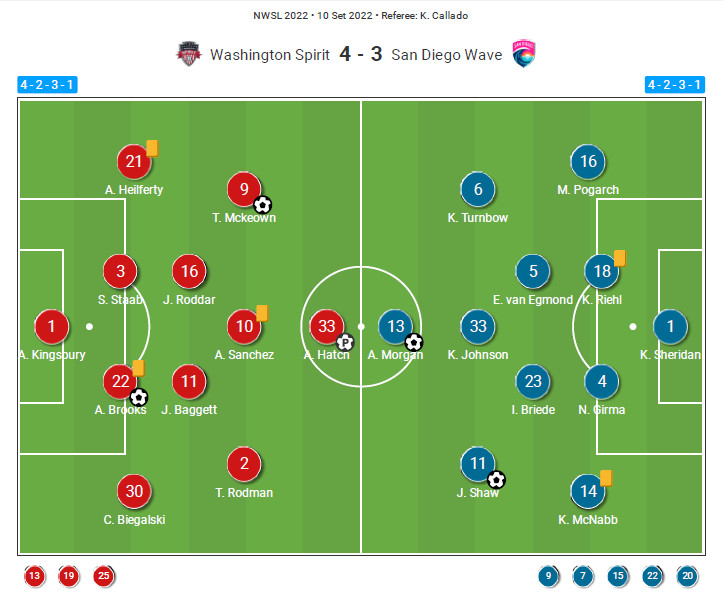 Washington Spirit didn’t start the match in the way they wanted as they conceded a goal in the sixth minute due to poor marking inside the box. Van Egmond was able to cross the ball perfectly towards the direction of Shaw’s penetration while the latter’s direct marker wasn’t aware of Shaw’s movement and didn’t follow her or attempt to intercept the cross. This individual defensive error led to conceding the first goal of the match as Shaw knew how to finish the action very well despite the difficulty of the execution of that volley. 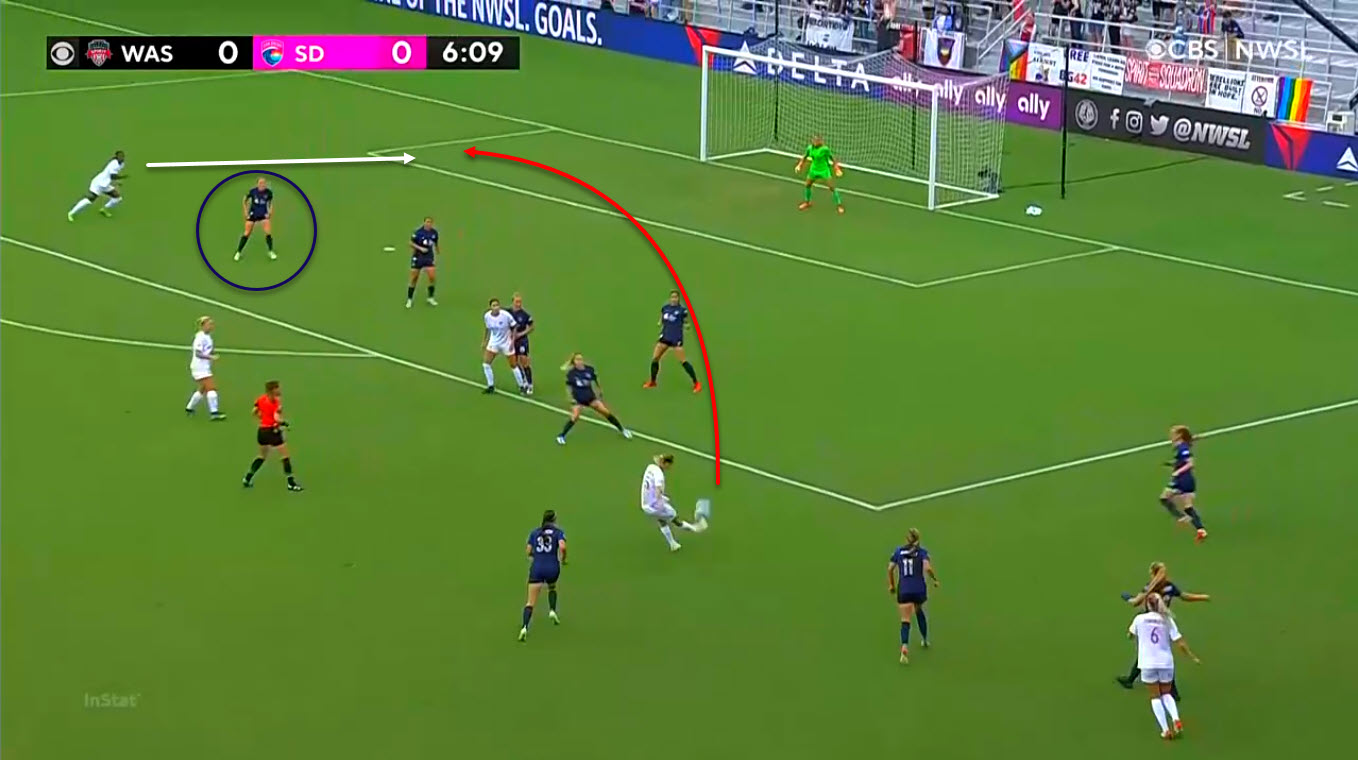 A few minutes later, Sanchez and her great counterattacking usefulness were crucial as she advanced inside the final third and fixed her opponents before giving an excellent assist to Mckeown, giving her the chance to score the equalising goal, as you can see below. 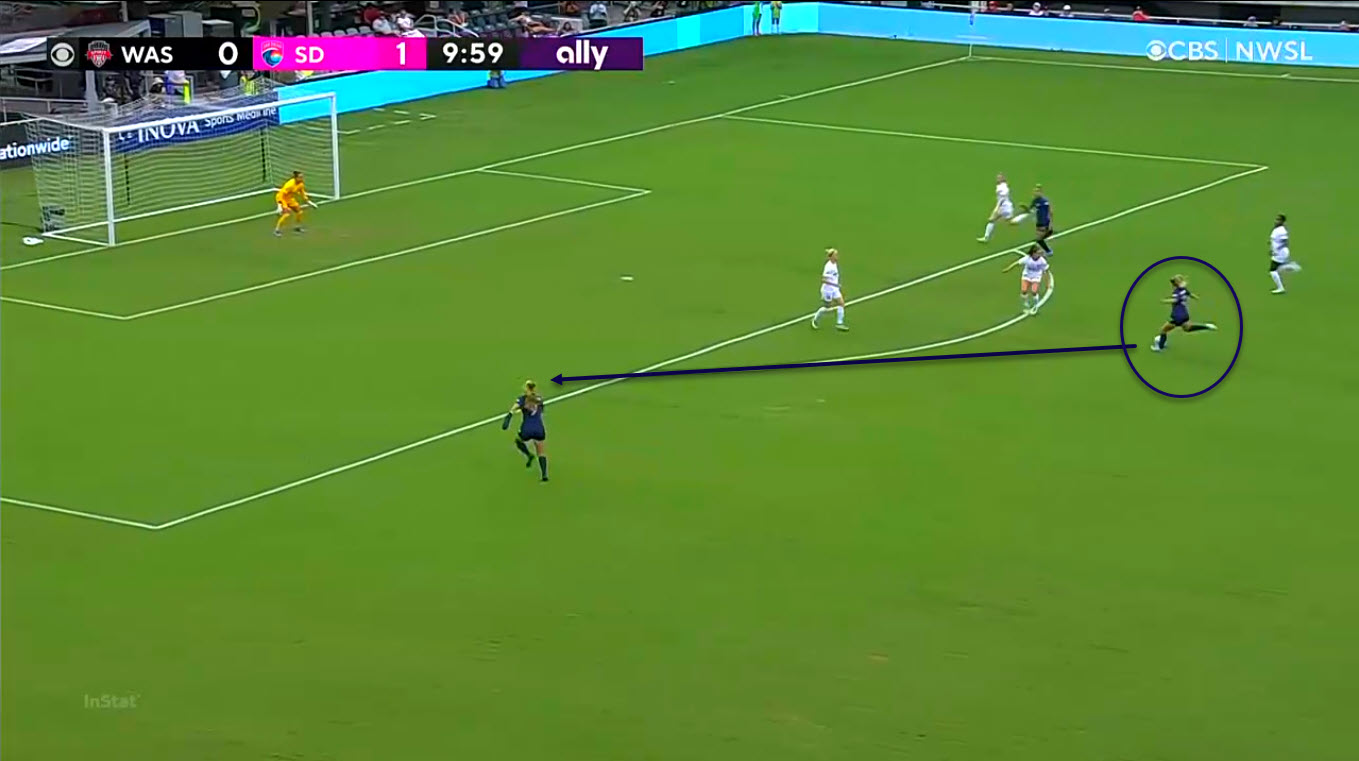 Sanchez’s role in this regard is fundamental for Washington Spirit as she is always the player who leads the transitions and ensures to serve the rest of the attacking players very well. She exploits her pace and dribbling skills in order to fix defenders and attract them before passing to her teammates to put them in favourable situations. And in other situations, she goes for the individual solutions by getting past defenders and shooting.

What is certain though is that both solutions are usually dangerous when led by Sanchez. This match and the following graphic proved this fact even further and showed how Sanchez’s penetrating efficiency is just excellent. 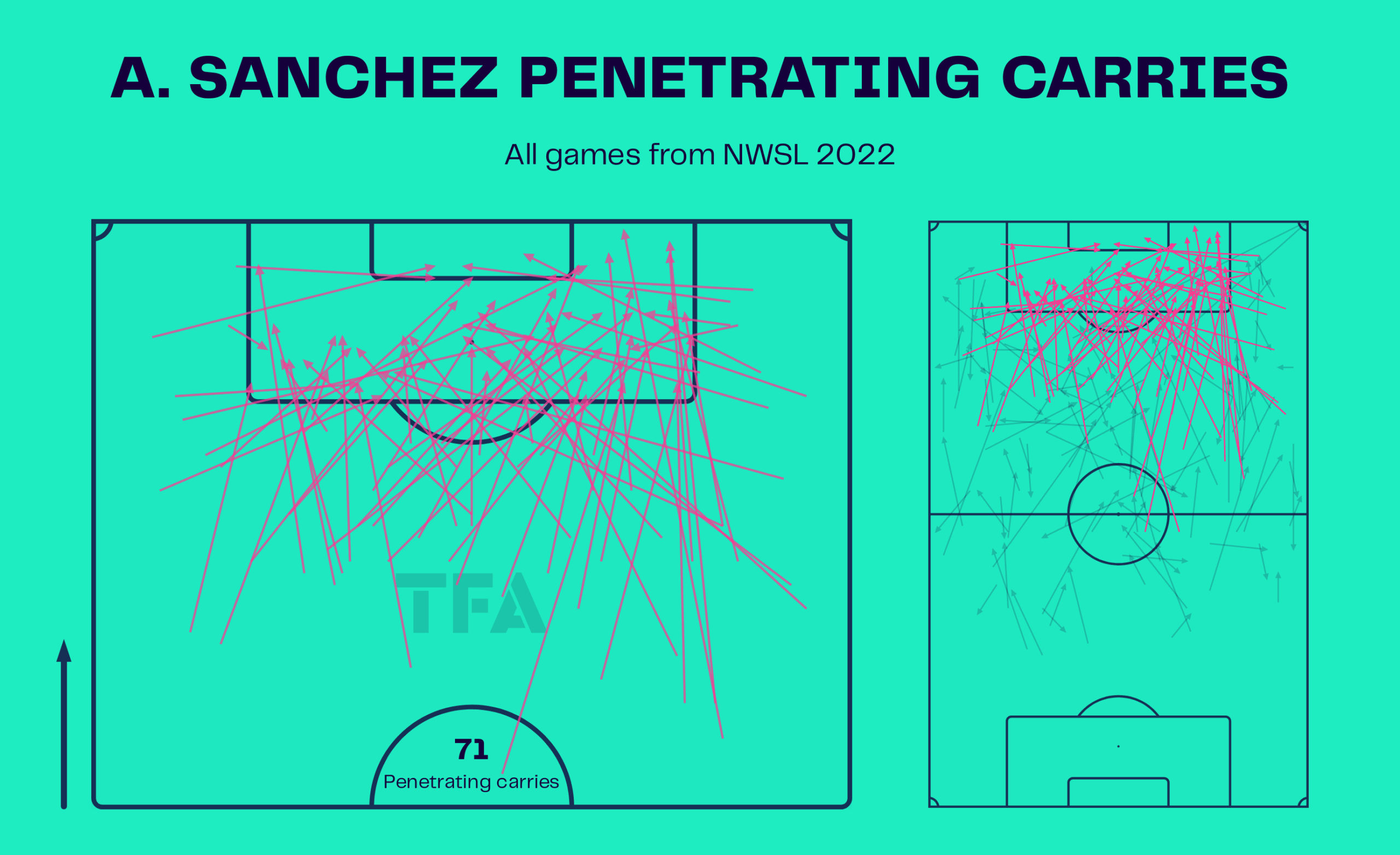 In addition to Sanchez’s huge attacking contribution, a player like Rodman usually creates the difference for Washington Spirit thanks to her agility, consistent advantage on defenders in offensive duels as well as her outstanding physical and dribbling abilities. All these characteristics make Rodman a great weapon on the right wing, especially when bearing in mind that she is also very good at crossing and shooting from distance. 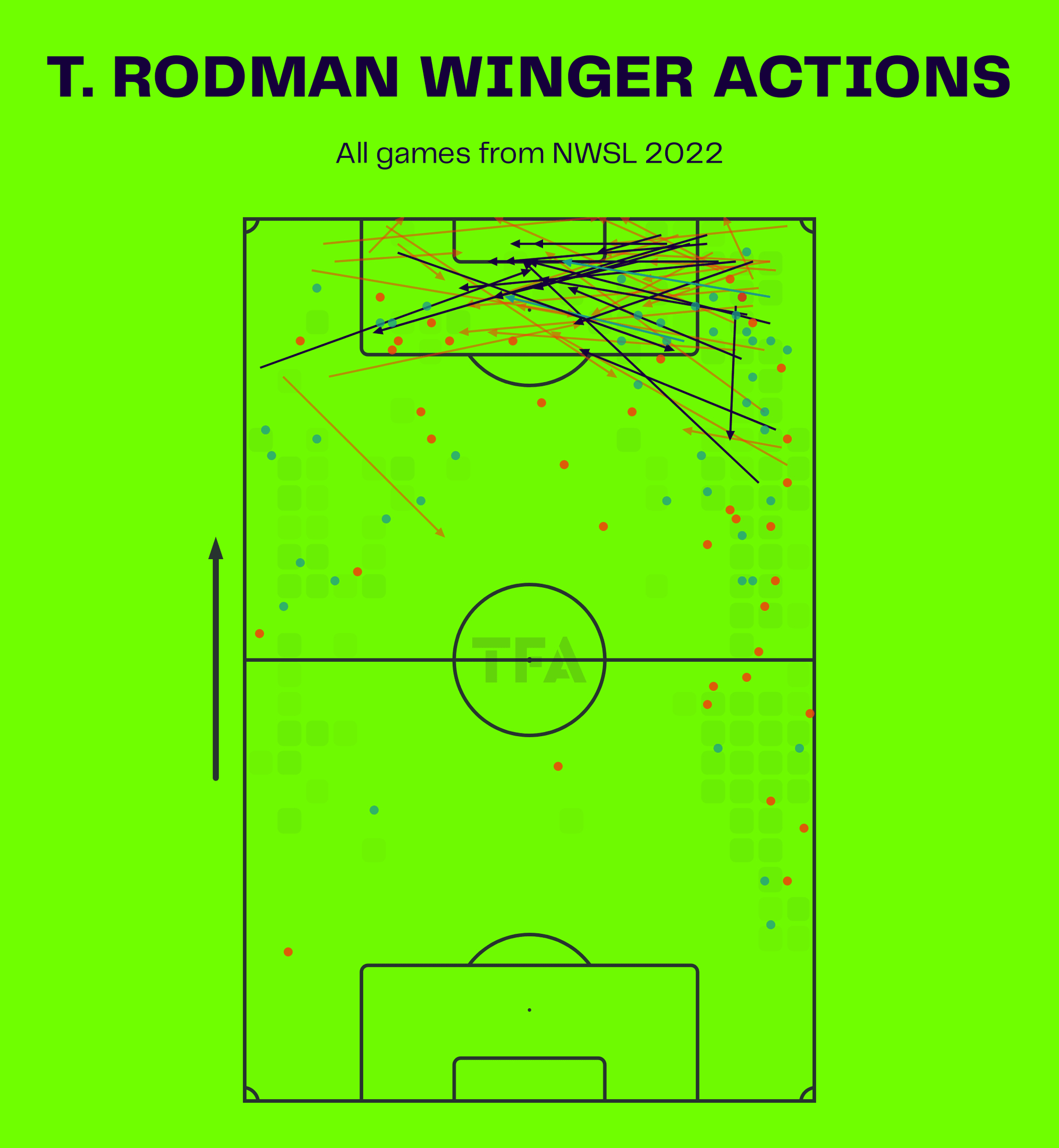 Apart from the four scored goals, Washington Spirit created and missed many other chances as they shot 16 times with 8 on target. Mckeown in particular had two or more goalscoring chances without counting the goal she scored, but her shots in these chances went off target. The same applies to Sanchez and Rodman who both made some attempts at shooting, but without success.

But overall, the team’s performance was excellent from an attacking perspective yet it requires some work on the defensive positioning and marking. The credit should also go to Brooks who scored the team’s third goal in an excellent and unpredicted way when she was at the receiving end of her teammate’s corner-kick which was going far from the far post. Yet, Brooks was able to direct it towards the goal with an accurate header that confused the goalkeeper and went inside the net.

San Diego Wave put on one of their best performances in NWSL during this match as they showed great character and were very close to obliging Washington Spirit to draw 3-3 if not for a late Washington Spirit goal. Despite committing defensive errors, the team looked concentrated throughout the match and even when they were losing 3-1. They didn’t lose hope and showed a great determination to equalise and exploit the opportunities they got.

It is true that San Diego Wave scored the first goal following a great cross that was followed by a great finish by Shaw, but later on, the team committed numerous defensive mistakes and allowed their opponents to have more possession of the ball and reach their own penalty box quite often, which resulted in them conceding three goals. For instance, the three San Diego Wave players involved in this action could have done a bit more to prevent or at least deviate Brooks’ shot. 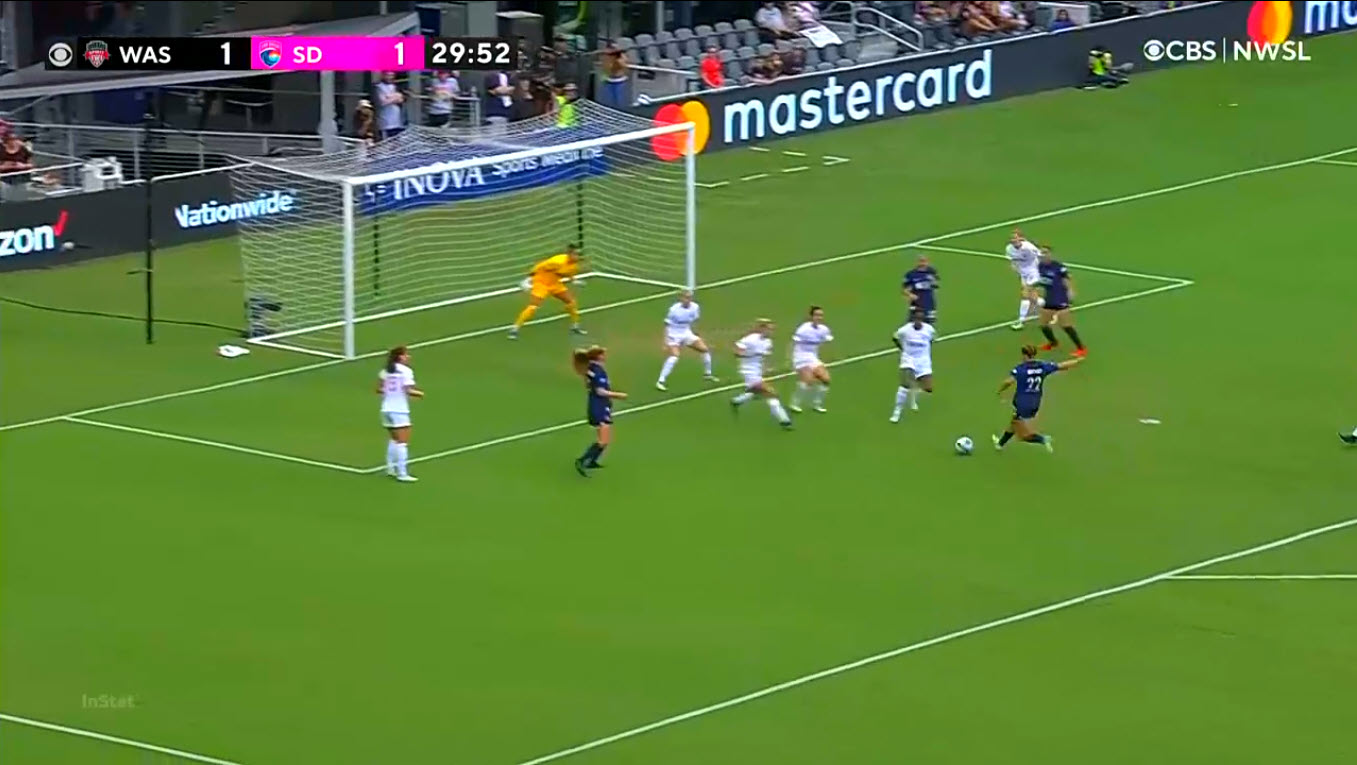 Nevertheless, San Diego Wave gave an impressive reaction after conceding the third goal and this comeback was led by Morgan who was the source of the penalty that was awarded to San Diego Wave. She succeeded in executing the penalty with success and then, she was able to add a third goal in a great way.

She confused her direct marker when the corner-kick was about to be executed, freeing some space for herself, and when the ball was coming towards the box, she jumped higher than everyone as the picture shows and kicked the ball with the back of her head to equalise the score. 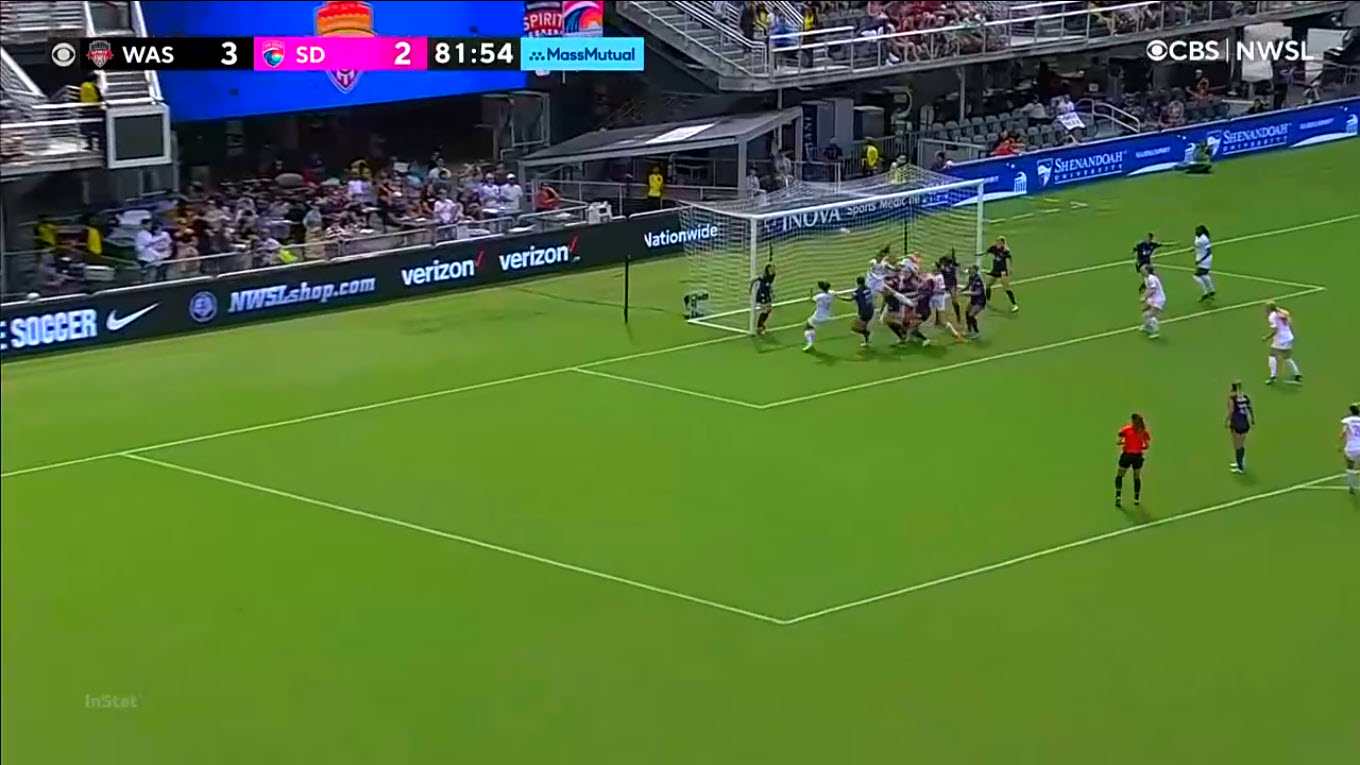 Unluckily for San Diego Wave though, this comeback was ruined due to a late goal for Washington Spirit that could have been avoided if San Diego Wave defended better and prevented their opponents from reaching the box during the last few minutes. It should be said however that Amirah Ali also had a golden opportunity to score the winner of the match as she received a through pass from Jodie Taylor and found herself in a one-on-one situation with the goalkeeper, who eventually saved her shooting attempt.

This match and its three points will serve Washington Spirit a lot especially in confidence and motivation terms as it will encourage them to do better in the upcoming games and win more points to reach the playoffs.

On the other side, San Diego Wave should be proud of their performance and determination until the last minute despite having lost the game at the end. The players showed a lot of positivity and, if they continue playing with the same passion, the team can surely reach and even exceed their seasonal goals.