Anthony Modeste 2021/22: The veteran forward flourishing for Koln in the Bundesliga – scout report

Anthony Modeste turns 34 this season and yet he is having one of the finest campaigns of his career. In fact, he is well on his way to matching the goal tally he managed in the most prolific season of his career, where in 2016/17 he scored 25 goals for Koln in the Bundesliga. In all competitions since that season, Modeste has managed just 27 goals. In that time he left Koln, returned to Ligue 1, where he played for Saint-Etienne, and then return once more to Koln. And yet he has had an incredibly impressive upturn in his form this season, having scored 16 in all competitions already.

This tactical analysis and scout report breaks down the key tactics Modeste employs in his role for Koln, providing analysis on just why he has been so potent in front of goal this season, as well as highlighting some of his key tendencies away from goal.

Modeste is successful without overcomplicating what he does. In an age where it is rare to see a traditional target man, Modeste is doing exactly this, and executing it perfectly. He has a slight tendency to drift out onto the left-wing, but varies his positioning in possession by working as a pass option either directly in the centre of the pitch and in the half-spaces, as we can see from the heat map shown below. However, the most striking thing is that the sheer volume of his action comes inside the opposition area. We will delve into this in more detail in a later section of this analysis. 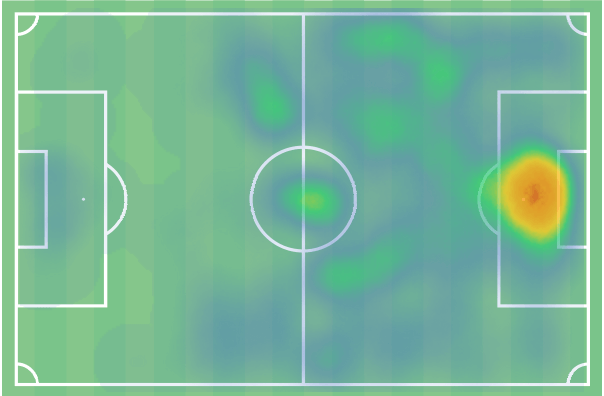 Modeste generally holds a high position, often in line with the last man in defence, at least initially anyway. He will then make a late adjustment after recognising the likelihood of a forward pass being played, where he can link play effectively. He is perfectly adept at holding up possession, given his 6’2” frame, and yet he can play quickly off of one-touch if he sees an opportunity to advance possession immediately.

We can see him dropping into the half-space to receive the ball in the image below, before then playing a first-time pass inside. Immediately after playing this pass he spins off and quickly pushes forward to stretch the pitch. 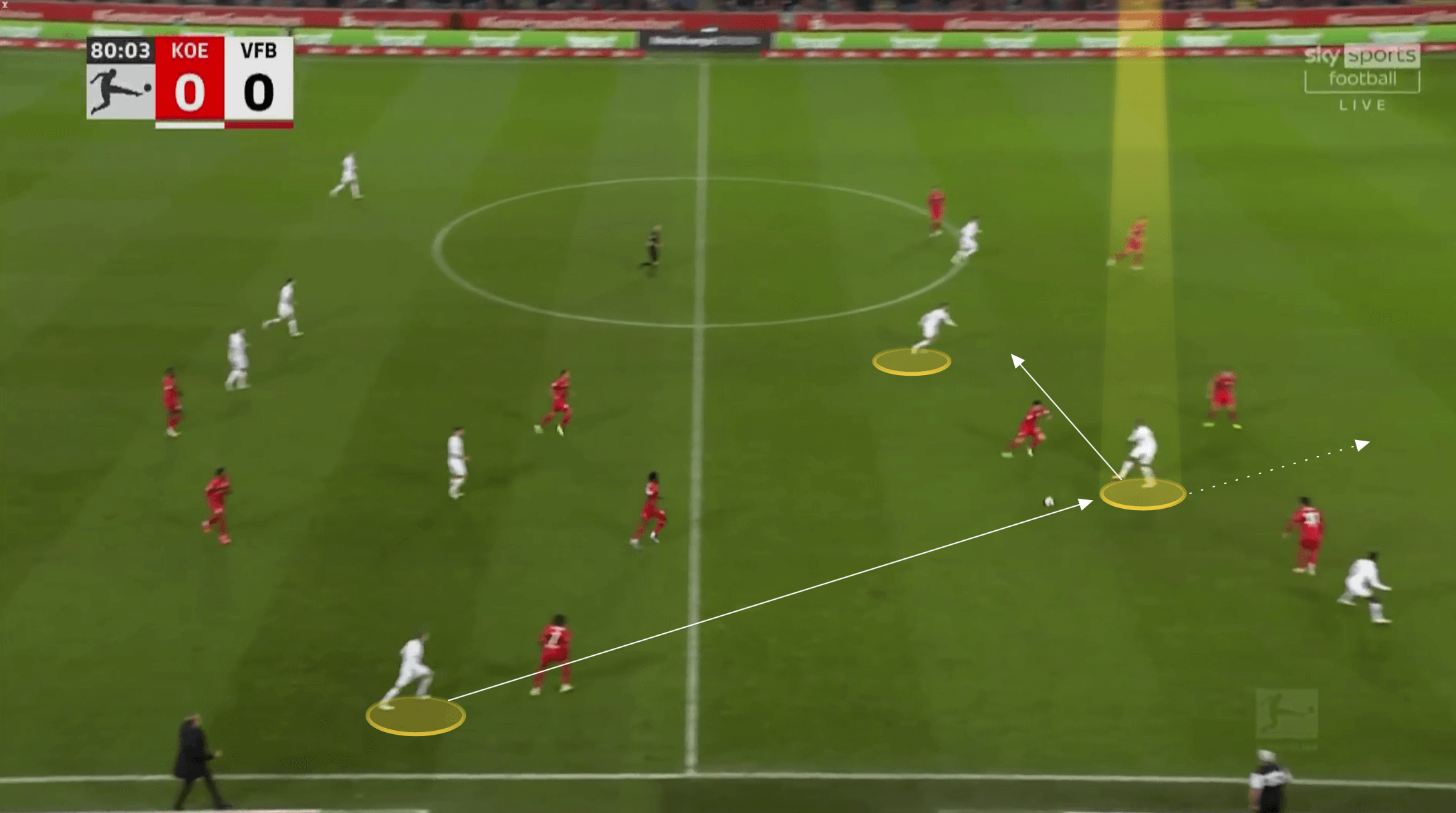 He uses the width of the pitch to avoid close marking, and he will provide a direct pass option too. He can help the ball on with a head or bring the ball down with his chest before laying it off to a runner either side of him.

We can see him doing this in the image below. However, we can also see how his positioning stretches the opposition defence. Note the Koln midfielder running through this central gap between the two Augsburg centre-backs. 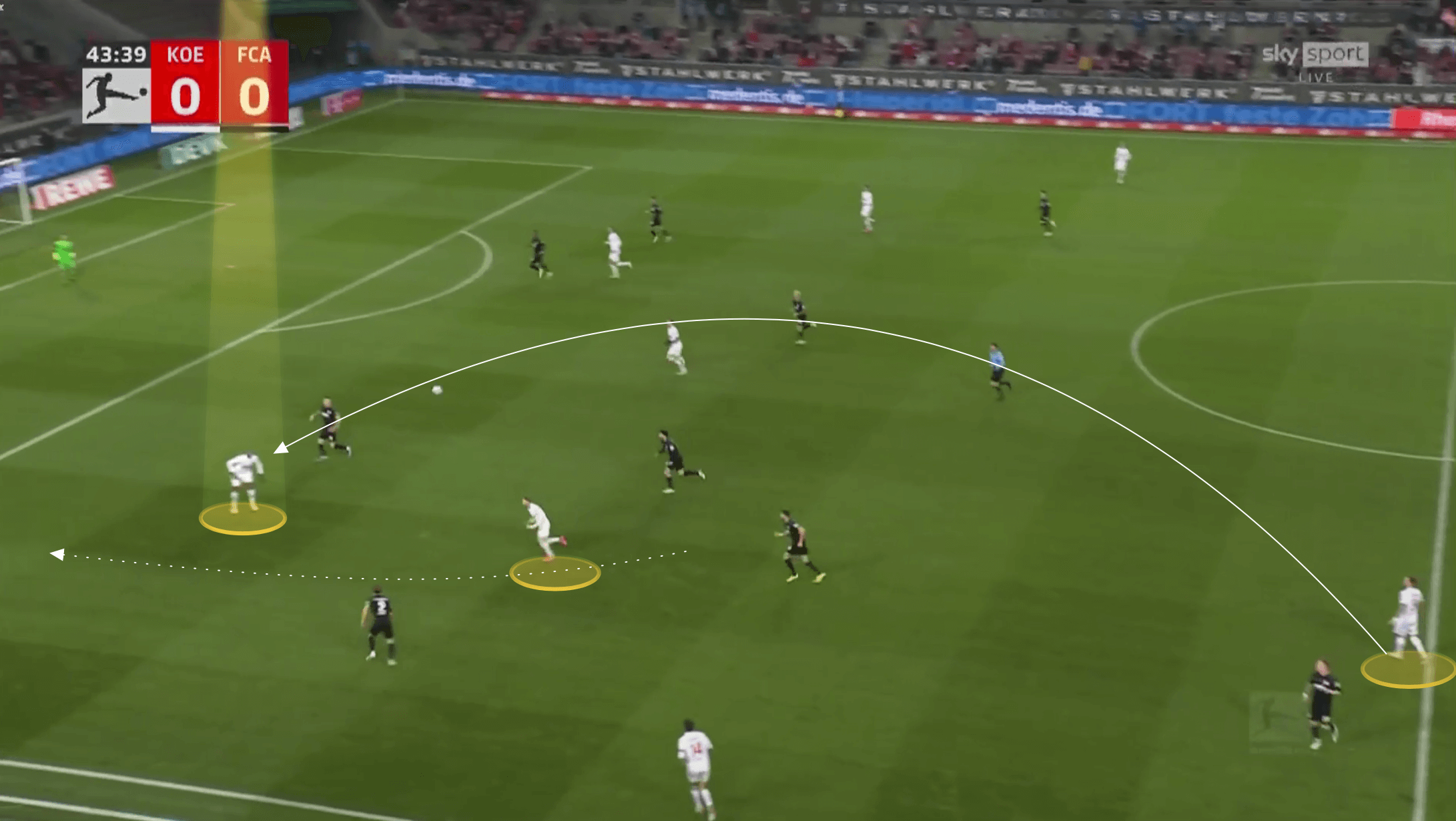 When a ball is played out wide into a crossing position Modeste instantly moves away from the ball. In doing so he delays his move into the area, allowing him to make a late run into the box as he favours. It also gives him the opportunity to either dictate the cross or react to the cross. He is able to make a run towards either post from this position, and has the space to give him momentum to attack the cross that the centre-backs marking him don’t have. 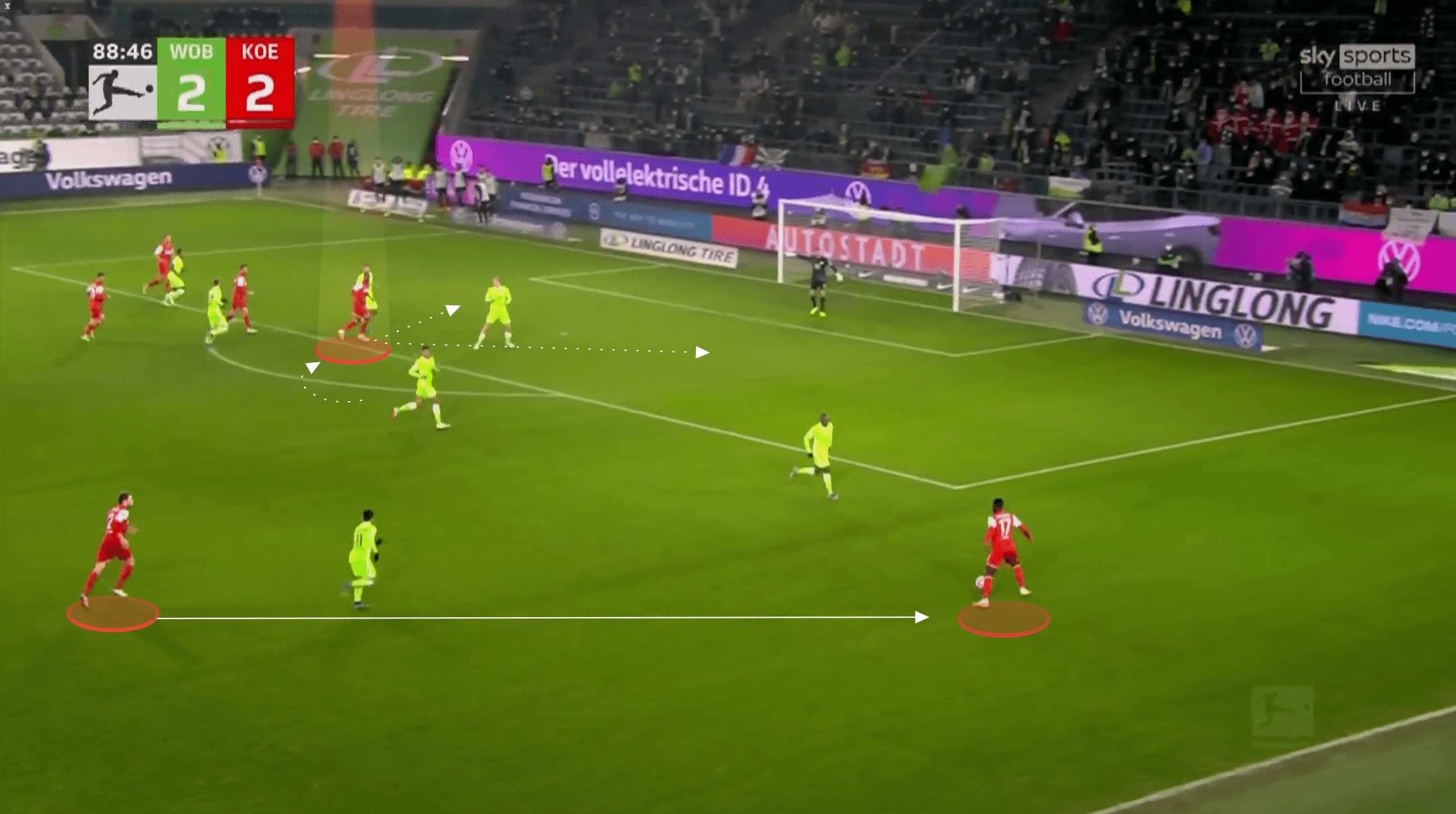 Modeste is also clever with his positioning to create space for others, which in turn creates better opportunities for himself. He is disciplined at playing on the last man but equally staying on side. He may drift into deeper areas, but as soon as the ball is played into a teammate in the 10 space he will immediately push forward and look to stretch the pitch vertically. We can see him doing this in the following image. This movement prevents the highlighted centre-back from being able to step forward and press the ball-carrier, and yet from this position Modeste has an advantage in getting onto the ball in behind. 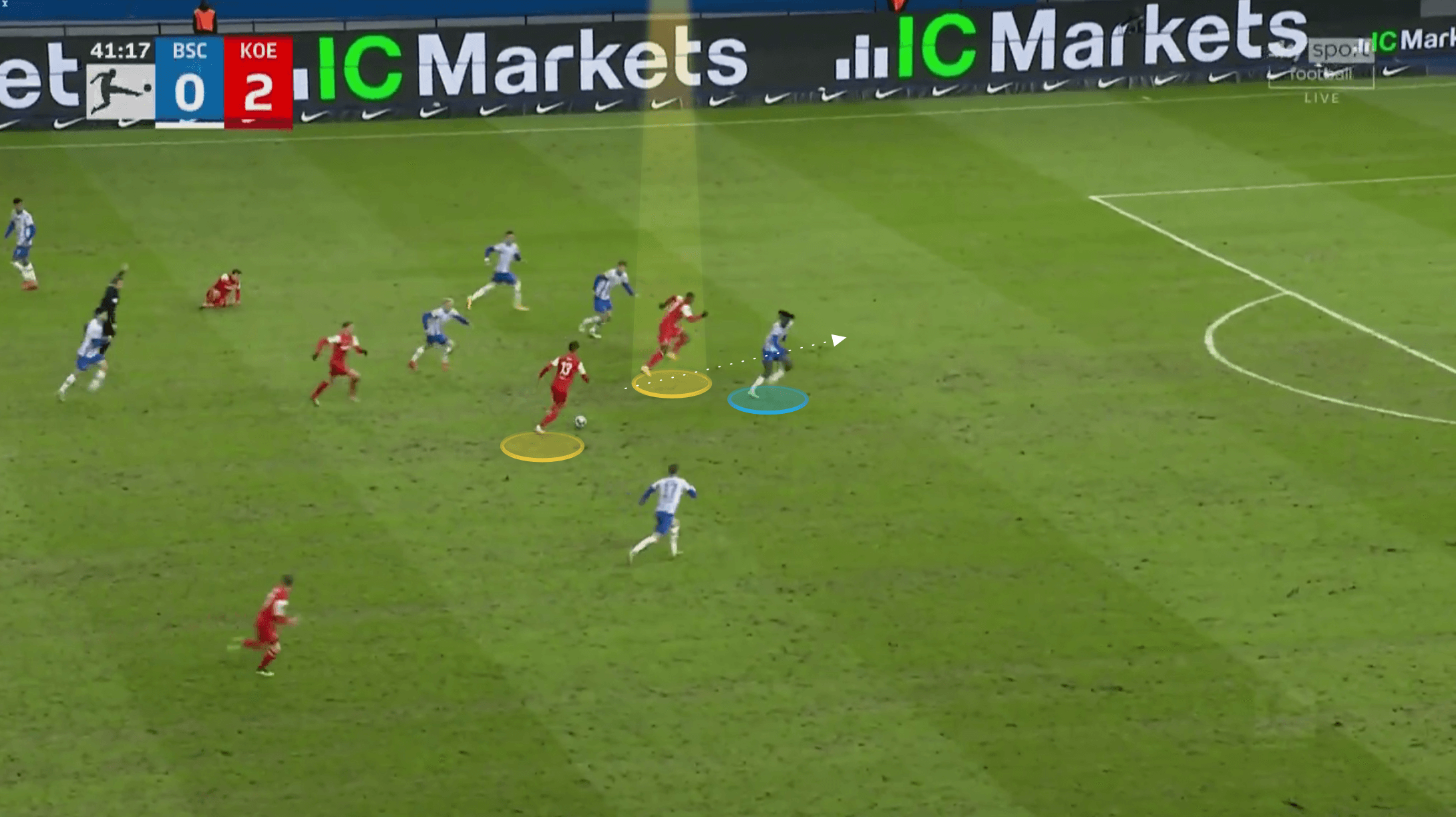 Modeste shouldn’t be seen as a traditional target man. He has plenty of pace to burn and is frequently a threat if the opposition defence fall asleep and have poor organisation, or leave too much space behind. He is quick over both short and longer distances, and the timing of his runs is exceptional. 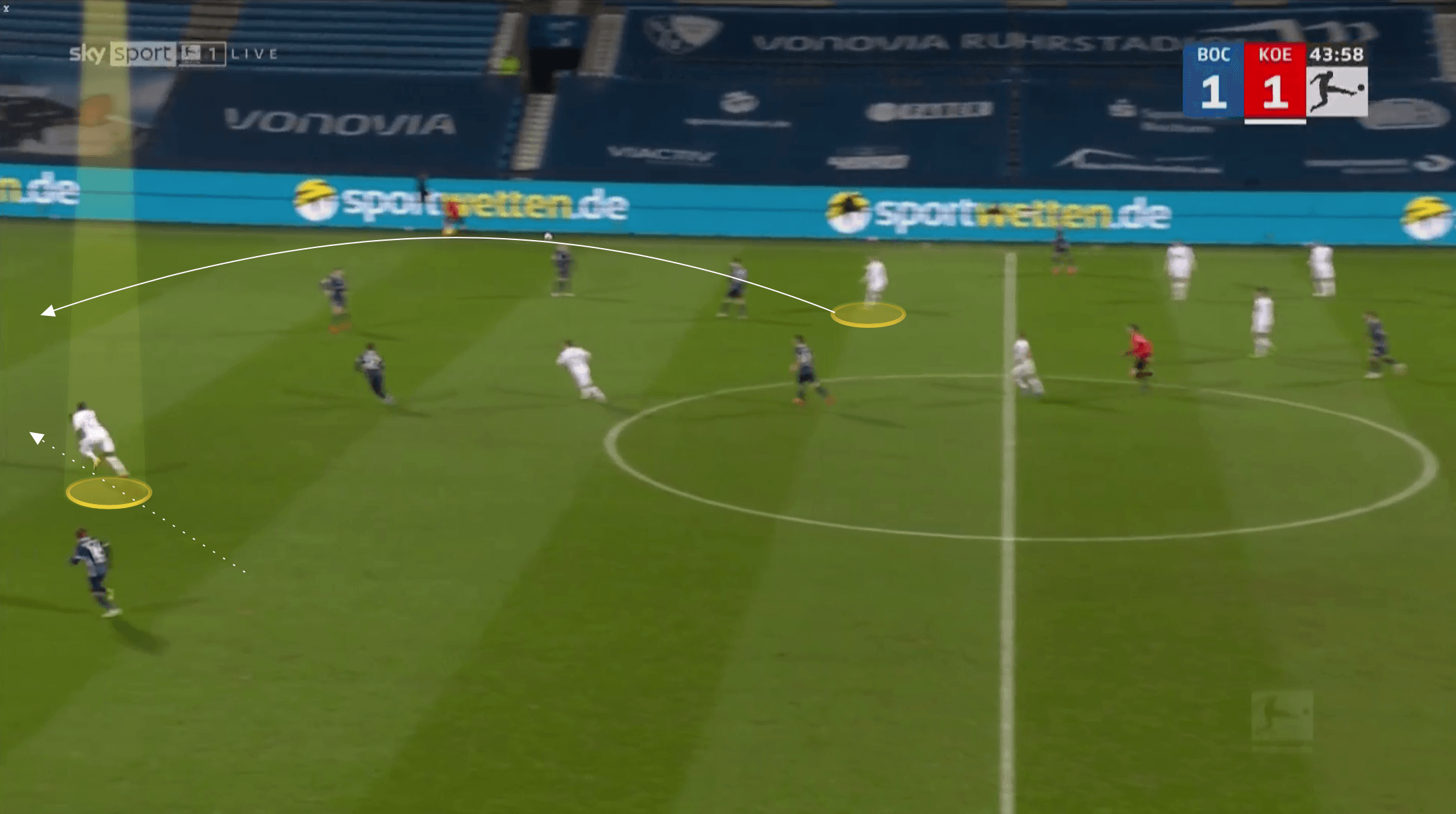 Whilst he often plays on the last line of defence, as shown already, he is still a threat from these direct balls in behind even if initially positioned deeper. If he drops deep to offer a shorter pass option, he will recognise the intention to play behind, and if the opposition centre-backs are caught in a flat position Modeste will beat them in a foot race. 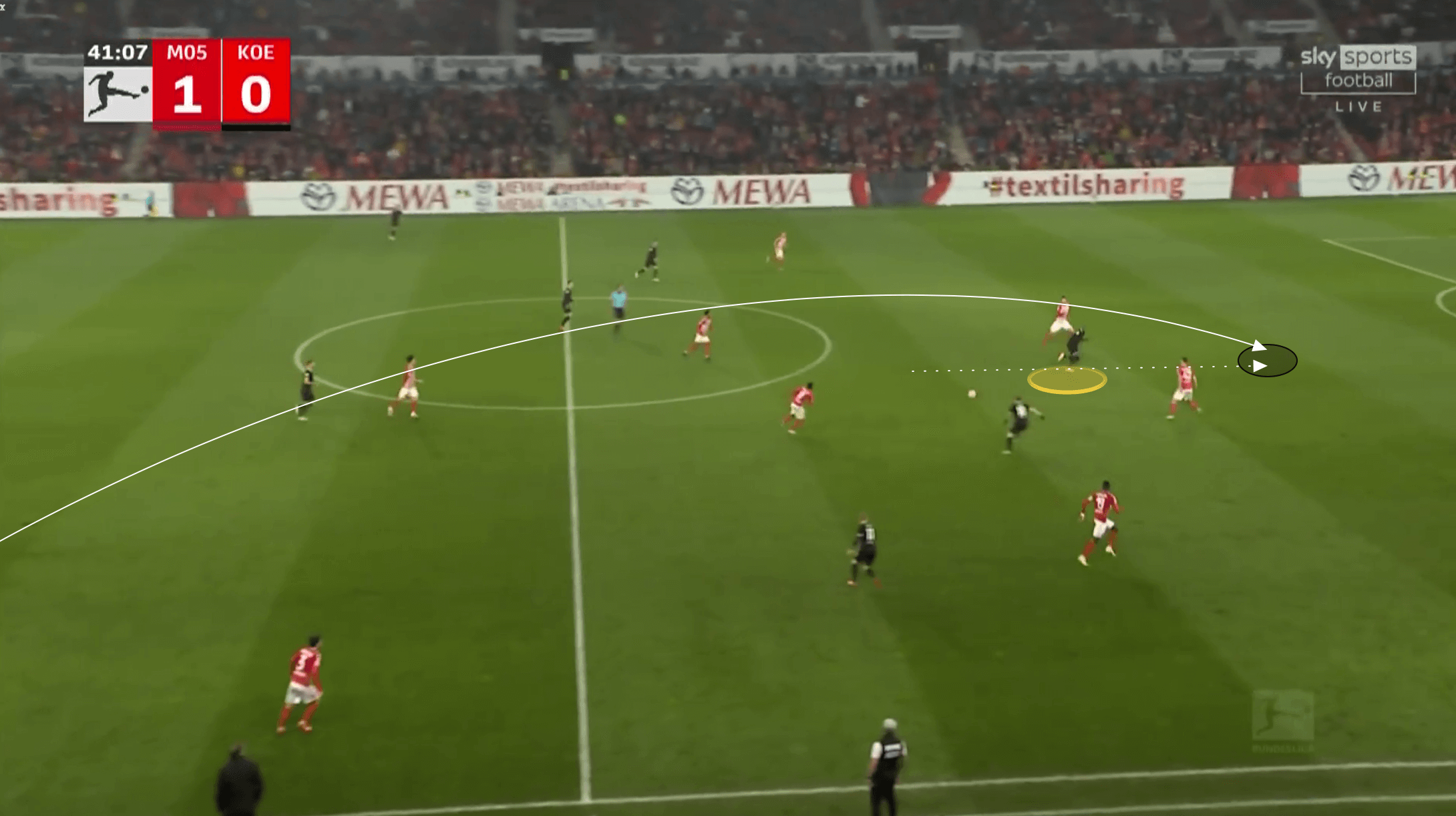 He isn’t just dangerous when there is plenty of space to run into. Modeste’s anticipation of through passes and his timing on runs even with less space behind to attack is second-to-none. 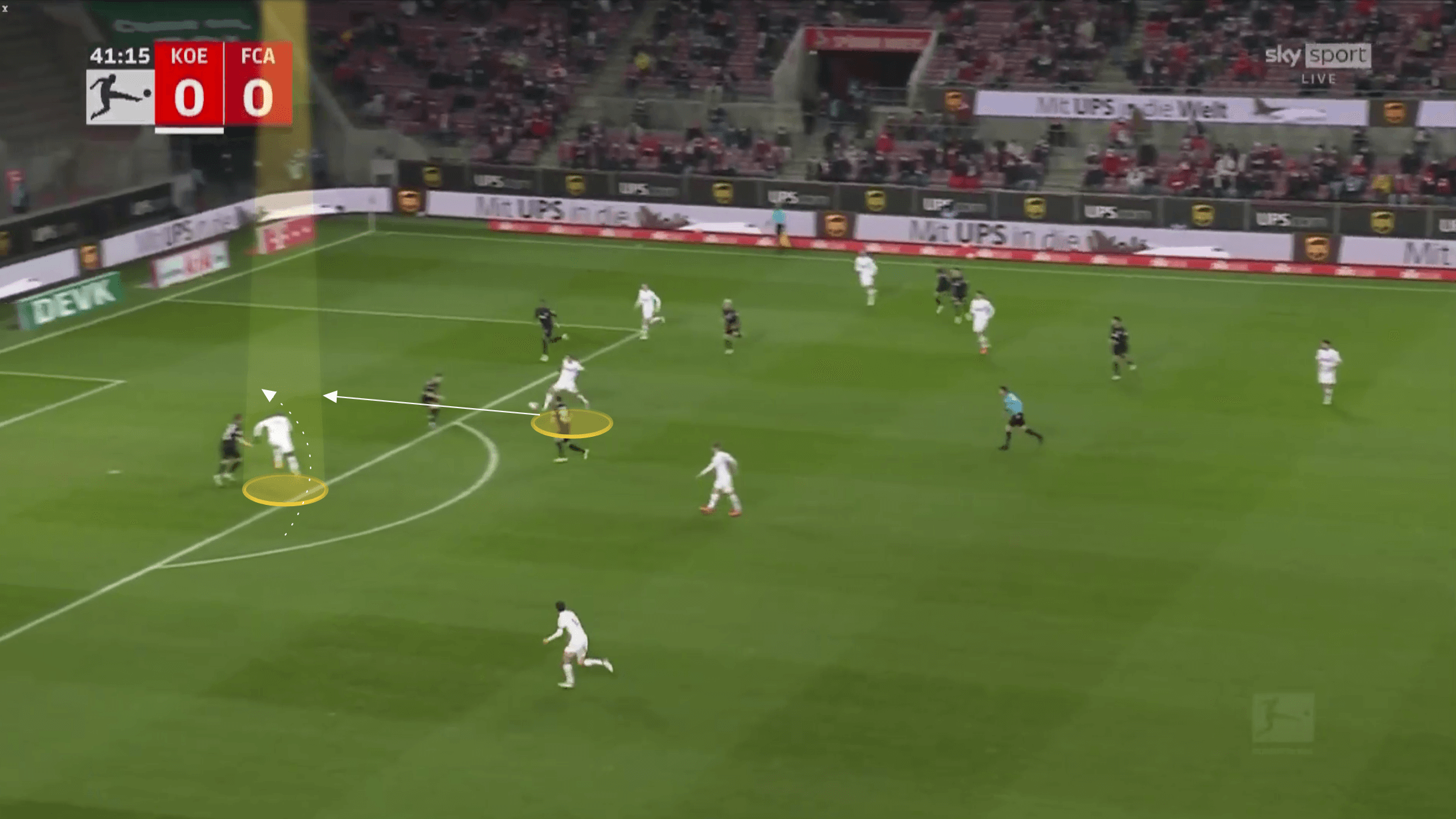 Modeste is most threatening when the ball is in wide areas, which will be developed more in the next section. However, his movement before attacking these crosses isn’t anything complicated. Modeste has an impressive spring to his leap and timing when attacking the cross. He will often aim to attack the back post where possible, however, and prefers to attack the ball with the defender ball-side of him. Koln know that they can put the ball into the air in the box and Modeste is highly likely to win the ball, whilst he is devastatingly accurate with his head. Below we can see a goal against Hertha where most wingers would look to slide the ball on the ground into the space between the defence and keeper, and yet this cross was instead whipped in at head height towards the back post. 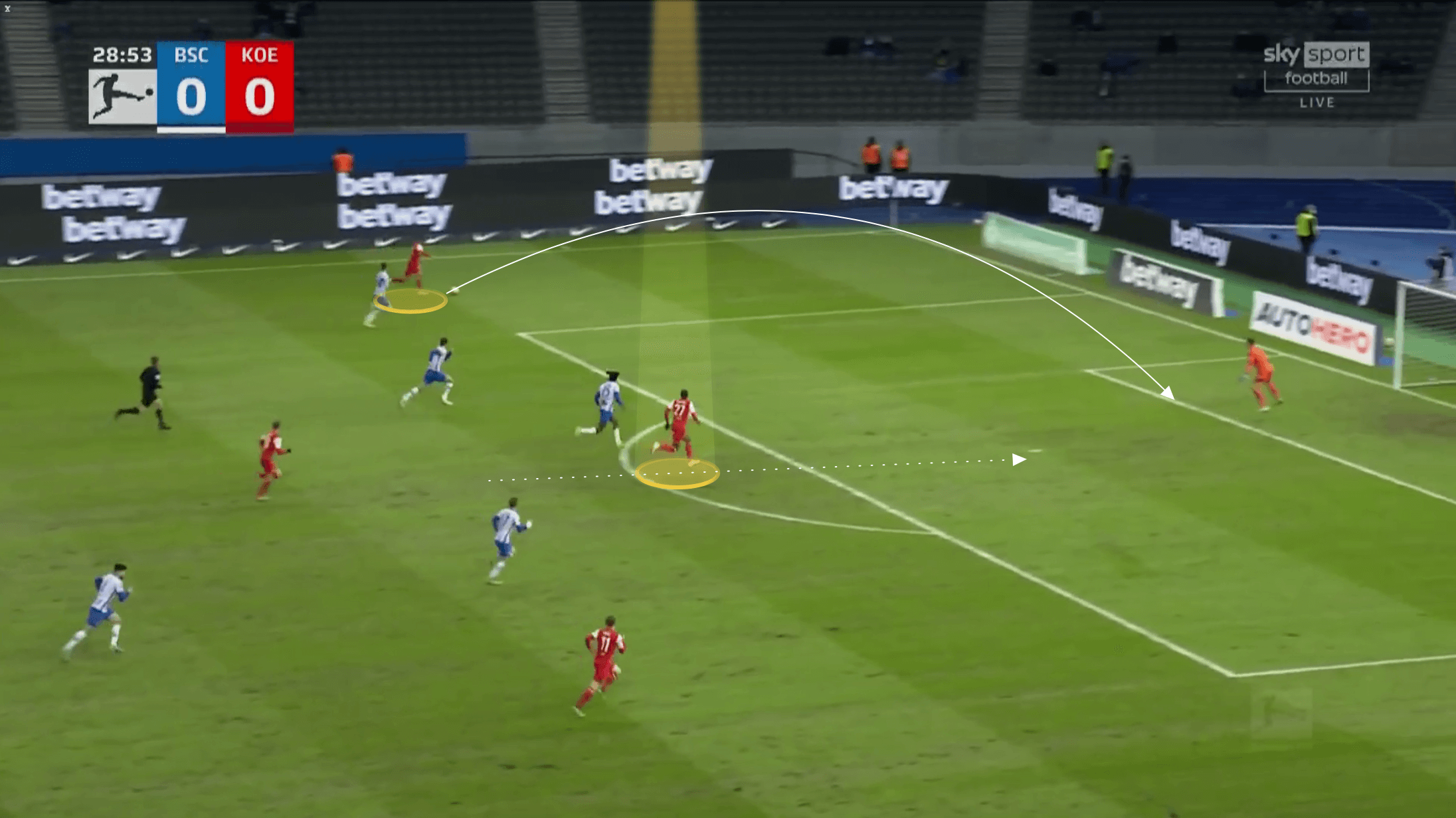 Half of Modeste’s goals this season have come from headers. That is a striking ratio, but when that represents eight goals, it is incredibly impressive, and something that needs looking at in more detail.

One of the most striking elements of Modeste’s finishing is his incredible efficiency in front of goal.

The following graph illustrates this showing the shots per 90 and touches in the box per 90 of forwards in the Bundesliga this season. It is no surprise to see Bayern Munich’s Robert Lewandowski and Borussia Dortmund’s Erling Haaland as outliers on this graph, with Bayer Leverkusen’s Patrik Schick in close company. These three are the only players to eclipse Modeste for goals per 90, however, Modeste is averaging a high number of shots per 90 from a far more limited volume of touches in the box. With his 3.4 shots from 4.1 touches in the box, we can see Modeste’s shots are coming from limited touches, mostly first-time shots from lay-offs or crosses on the floor – or from heading. 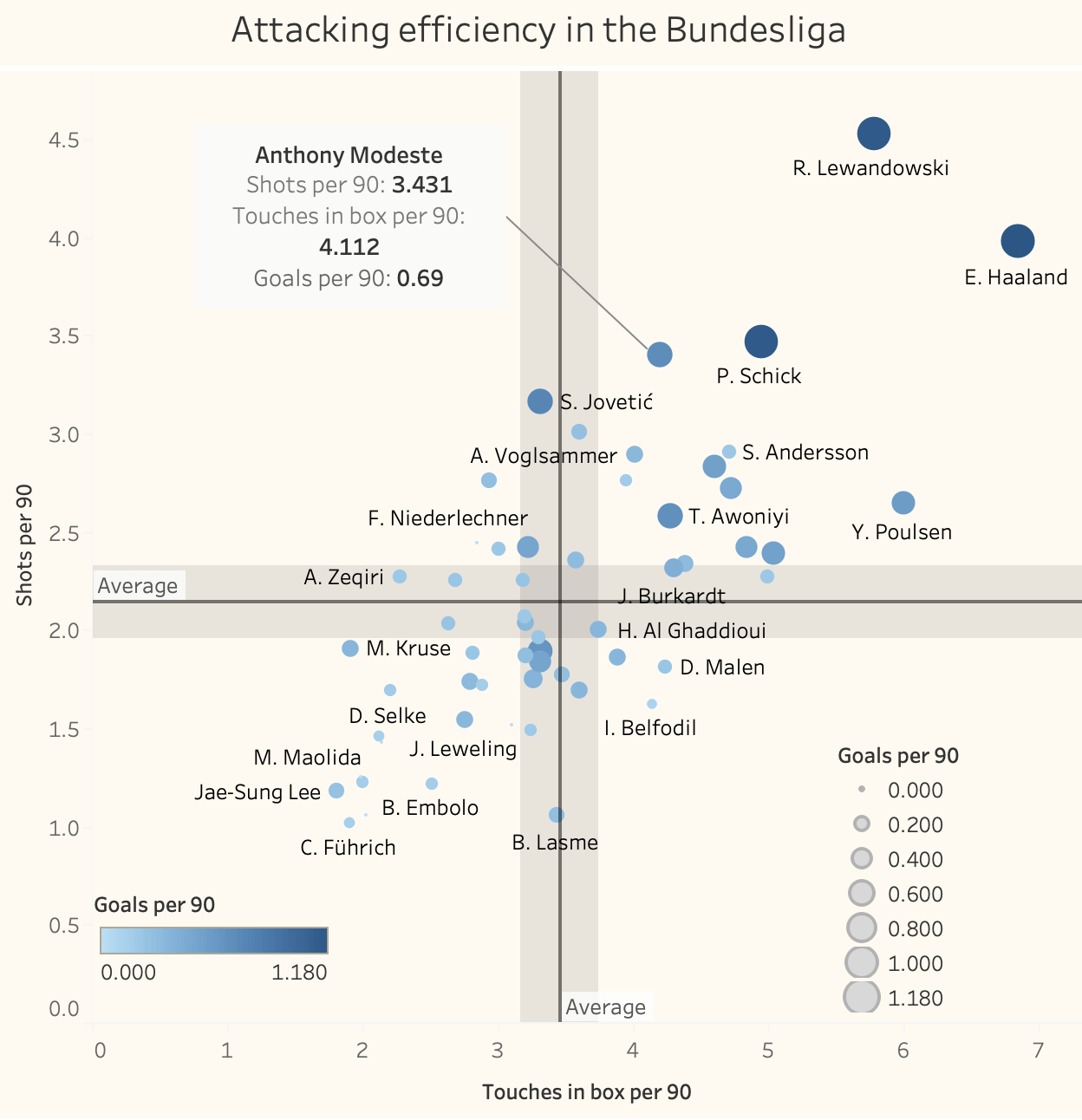 This is further back up by looking at his shot map from this season, where the vast majority of his shots come from inside the area. They are nearly all from central positions, with a high portion of his goals coming from very close to, or inside the six-yard box. Other than his headed goals, Modeste is very much a poacher. 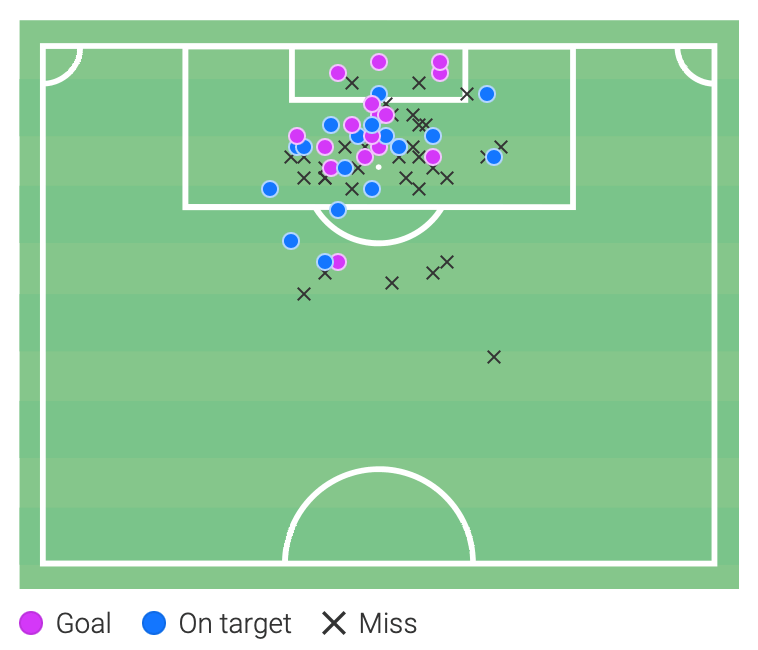 His headed goals deserve more attention, for Modeste has consistently shown outstanding quality to not only win the header in the first place, but to show incredible accuracy despite being in a congested area or contested duel.

Modeste is aggressive when competing and uses his frame intelligently to push the defender away from the ball, but does so fairly and doesn’t foul when taking this approach. He will do so early enough where he can then adjust his own positioning and get to the ball first. 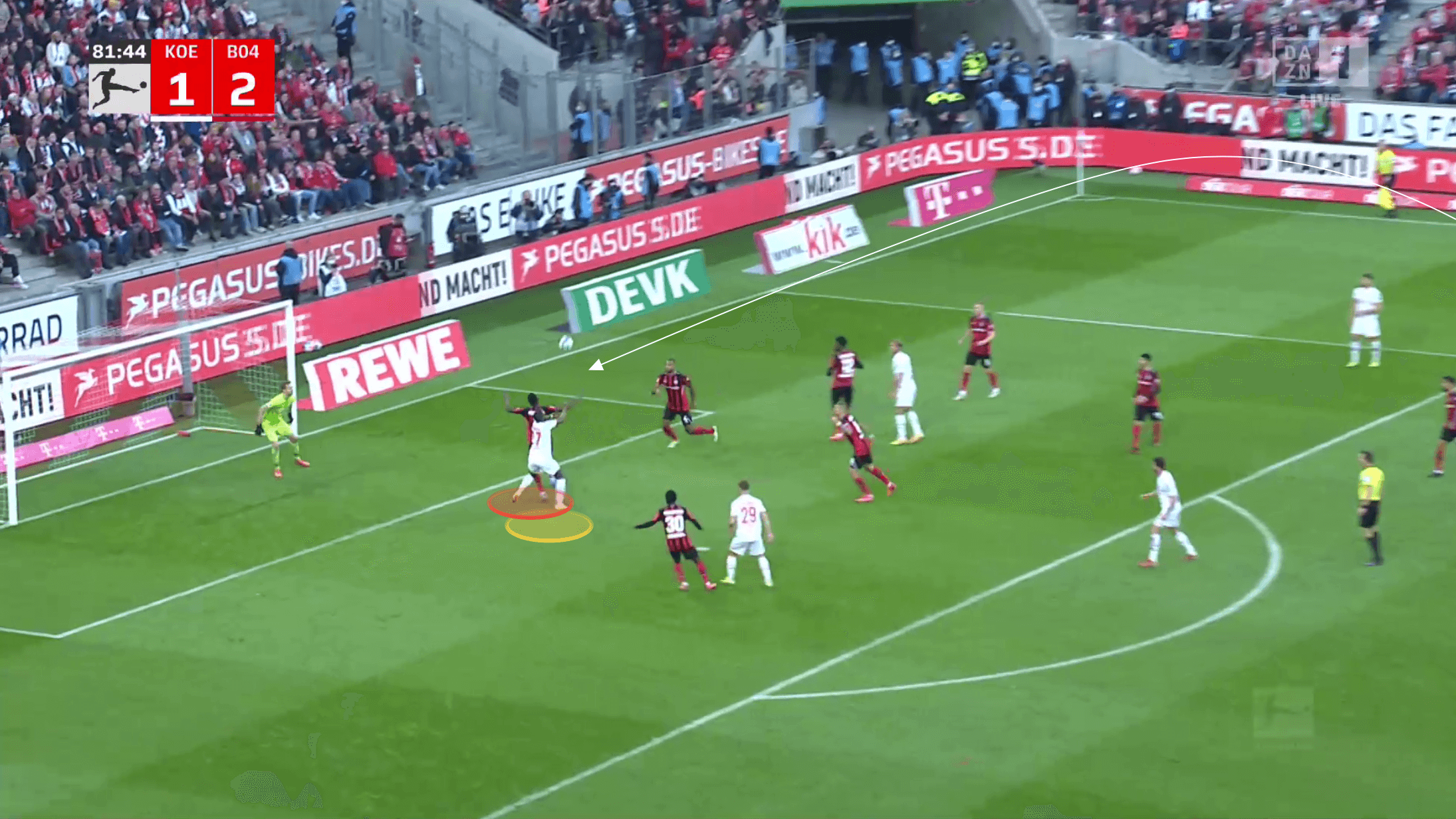 Modeste is able to finish from headers from further out and can obtain this accuracy and even power despite not always being able to head the ball in full flight. He can still attack the ball off of the back foot, even having to angle himself away from goal, as seen in the following image. 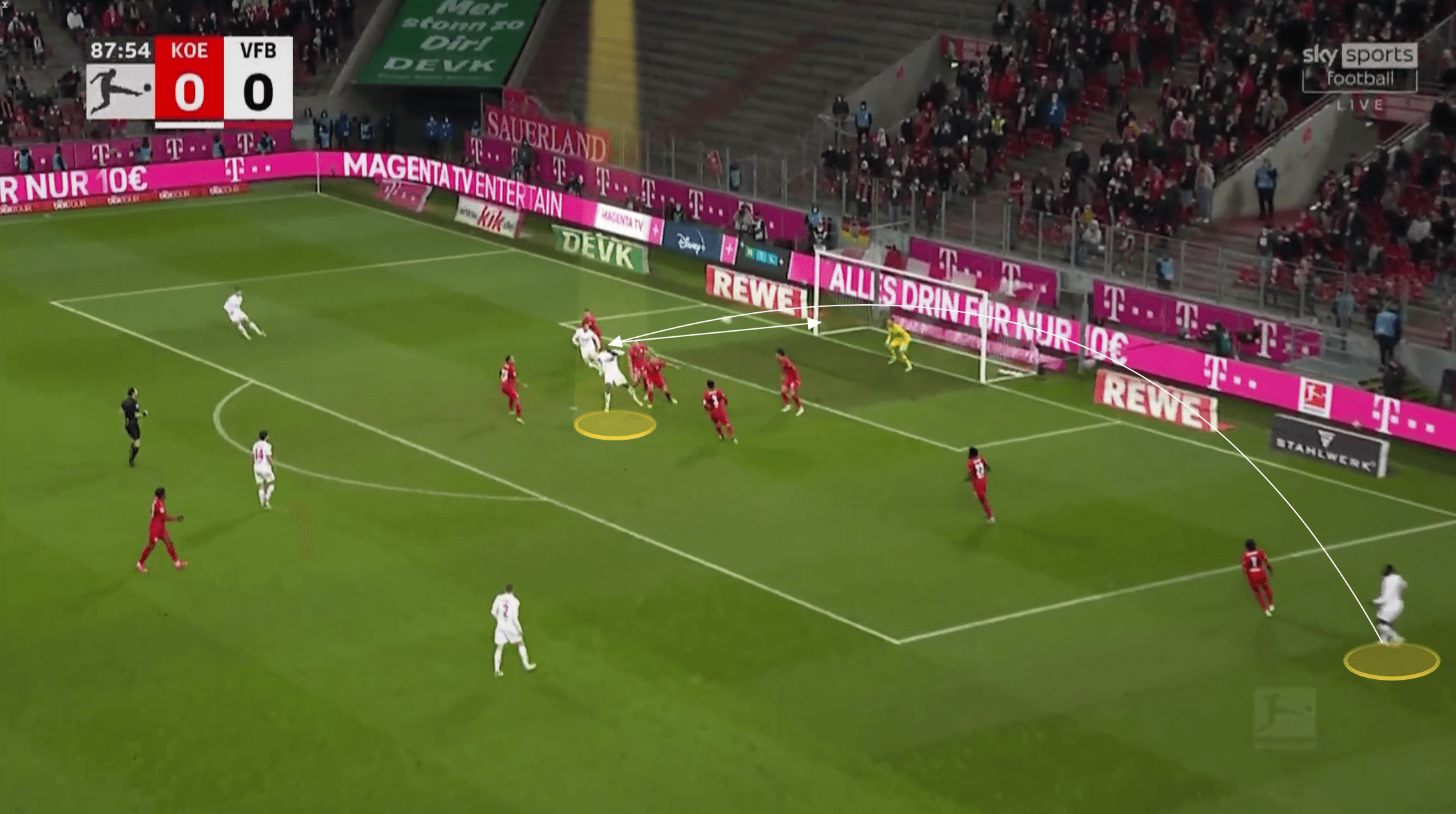 He will be clever with his positioning when attacking crosses if possible, often looking to isolate himself against a weaker defender in this moment. As a result, Modeste may be seen pairing himself against the far-side full-back, where he has a clear aerial mismatch.

The following image highlights this but also shows another example of Modeste’s ability to consistently pick out the corners from such deliveries, rooting the Freiburg goalkeeper to the spot in this instance. 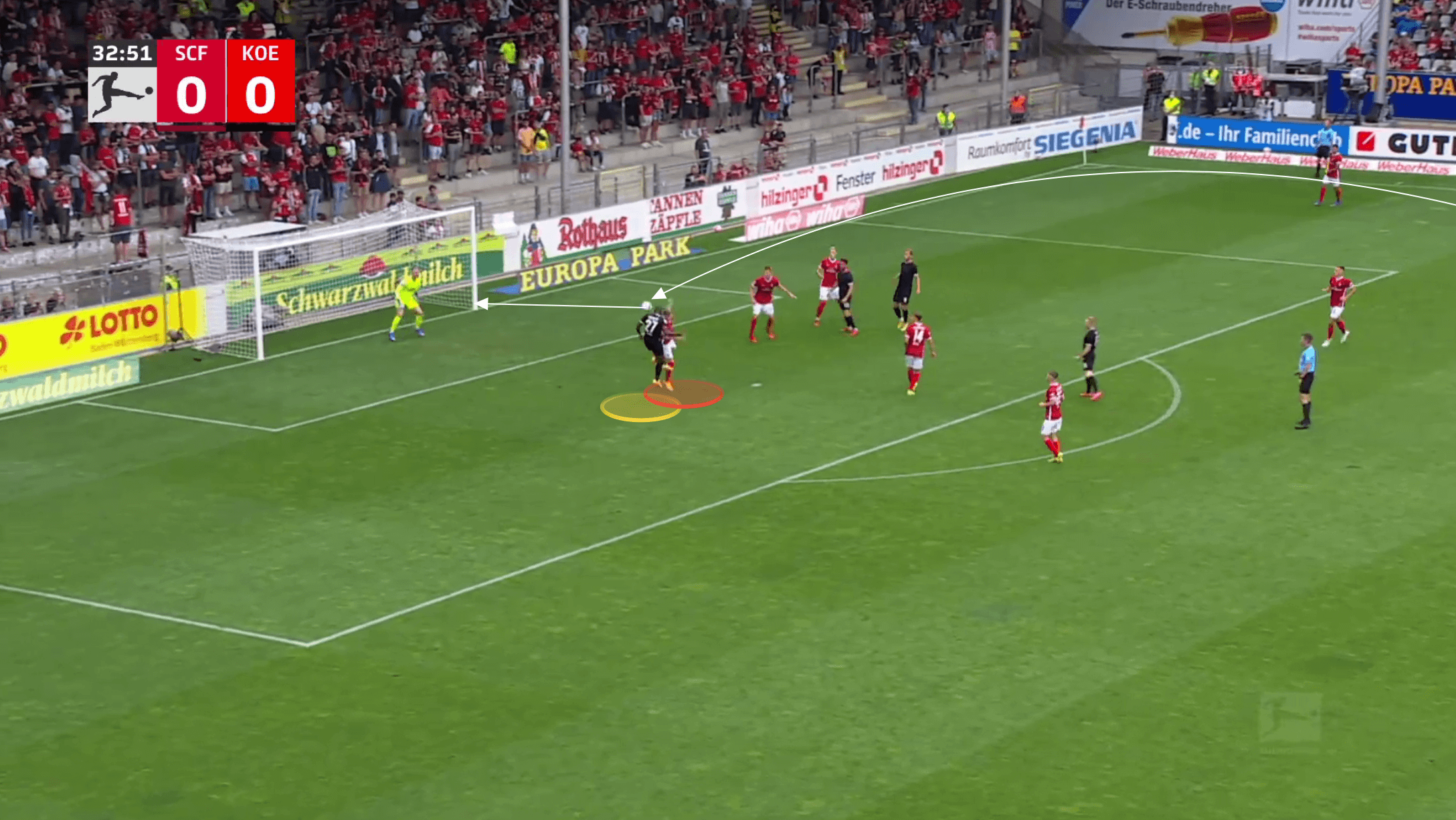 Modeste hasn’t reinvented his game. Instead he is playing for a team that understand his strengths as a forward, and have based much of their attacking play around looking to bring these strengths out of him. It will come as no surprise to find out that Koln average the highest volume of crosses in the Bundesliga, and in Europe’s top five leagues only Liverpool and Manchester City have averaged more. Modeste is enjoying a period of fine form towards the latter end of his career and it will be interesting to see if he can continue this beyond this season. It is refreshing to see a player regaining form late in their career, but also to see what so many may consider as a traditional target man flourishing in one of Europe’s best leagues.