Bamba Dieng 2022/23: Why the Marseille striker is destined for a move to English football – scout report

FC Diambars are a club from Senegal founded in 2003 by Patrick Vieira. His transfer to the France giants came because of a partnership between the two clubs a year earlier.

Dieng joined the Senegalese club at fourteen years of age. He was playing for the first team within three years and in the 2019/20 season scored an impressive twelve league goals, which at the time was 67% of Diambars total amount.

He made an instant impression for Marseille last season, scoring twice on his debut and securing a 2-0 victory against AS Monaco. Although he was mainly used from the substitutes bench, Jorge Sampaoli, his coach at the time, had no issues calling upon him when needed.

Now that Sampaoli has left, and Igor Tudor has taken over at the Stade Vélodrome it remains to be seen if Dieng will be given the chance to build on last season. With reported interest in him from Everton, Newcastle, and Nottingham Forest, should Igor Tudor not consider Dieng to be part of plans then a move to the Premier League could be on the horizon.

In this scout report, we will provide a tactical and statistical analysis which focuses on the key components of Bamba Dieng’s game and how they have led to his positive reputation in French football and seen him linked with a move to England. 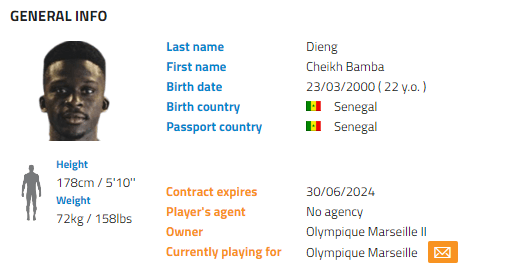 Last season, Dieng has been played as a centre-forward or on the left-hand side of the two in Jorge Sampaoli’s evolving 3-4-2-1 formation. The 3-4-2-1 was the base system for Sampaoli’s tactical approach, but when the team held possession, the team attacked in a 3-1-6 or a 3-2-5 and when they lost possession the shape often resembled a 5-4-1 or a 5-2-3.

This heat map is from last season and shows the average area of the pitch that Dieng occupied and contributed to Marseille’s play. Positionally you can see how his main attacking threat is through the centre of the pitch and towards the left-hand side. He has attributes in his game which are well suited to either area of the pitch. 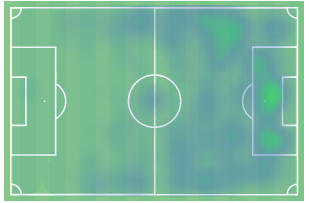 His movement right across the front of the attaching third is elusive and he has explosive speed. His movement compliments a team looking to impose a positional play approach, which is what Sampaoli implemented at Marseille last season. However, when you consider his movement combined with his pace, Dieng would also complement any team who looks to build their attacks through quick transitions as he is very effective at attacking space.  So, he does offer variation and is not fixed to playing for teams who play with a particular tactical approach.

With Bamba Dieng playing the role of a squad player last season it’s hard to build a solid picture of the level he is at and the level he can hit. Until there is regularity with his appearances then we can only assess him by the minutes he plays. Last season he played a total of 1277 minutes across 31 appearances in Ligue 1, the Coupe de France and between both the Europa League and Europa Conference League.

When we compiled the data, we decided to focus on players that are twenty-two and under, players that have played at least one thousand minutes and players that play on the left-hand side or through the centre, as Dieng did last season.

The data visualisation below assesses Dieng’s shooting profile. We compare the number of shots he makes per 90 minutes compared to the percentage of his shots that hit the target. Dieng is a shot-heavy player he averages 3.07 shots per 90 minutes he plays. Last season he took more shots on goal than any other player within our targeted range.  His shot-on-target success rate was 47.22%. His success rate was still above average when compared to the other players as it was the 5th best when measured against the other players of his age and position. However, it does show that Dieng has yet to achieve any kind of proficiency in front of the goal. 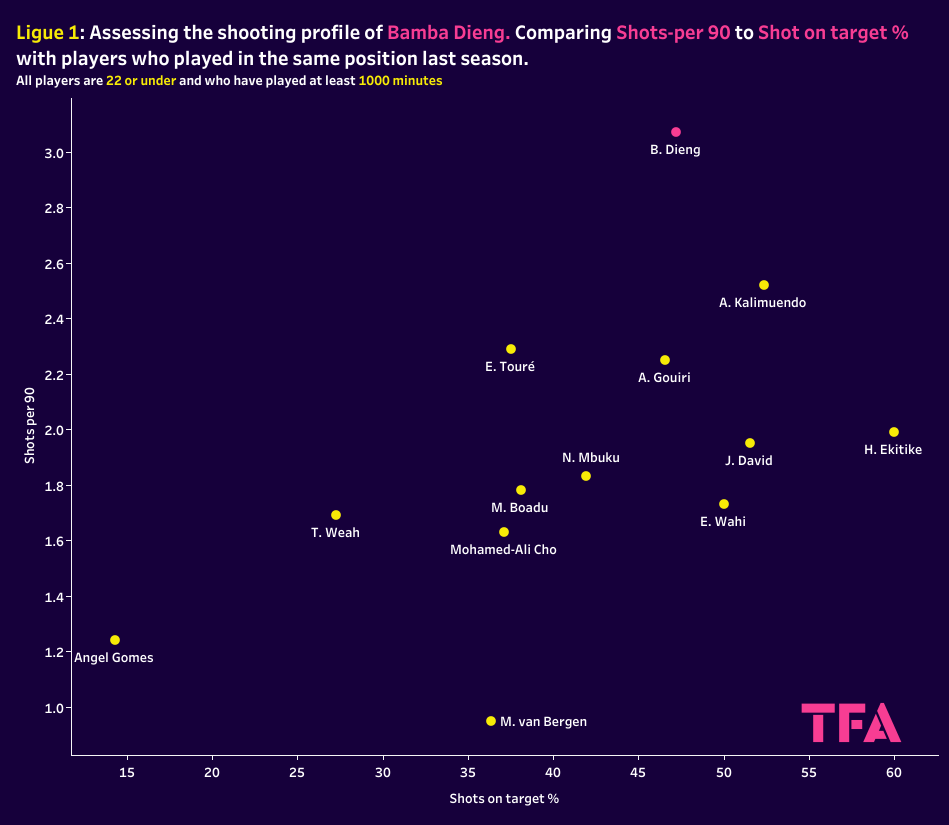 Shooting on goal with regularity shouldn’t be judged as a negative trait. It shows that as a forward that he has decisiveness in his play and an instinct to want to score which shouldn’t be disregarded at his age. He just lacks composure, which will develop if he plays more minutes. 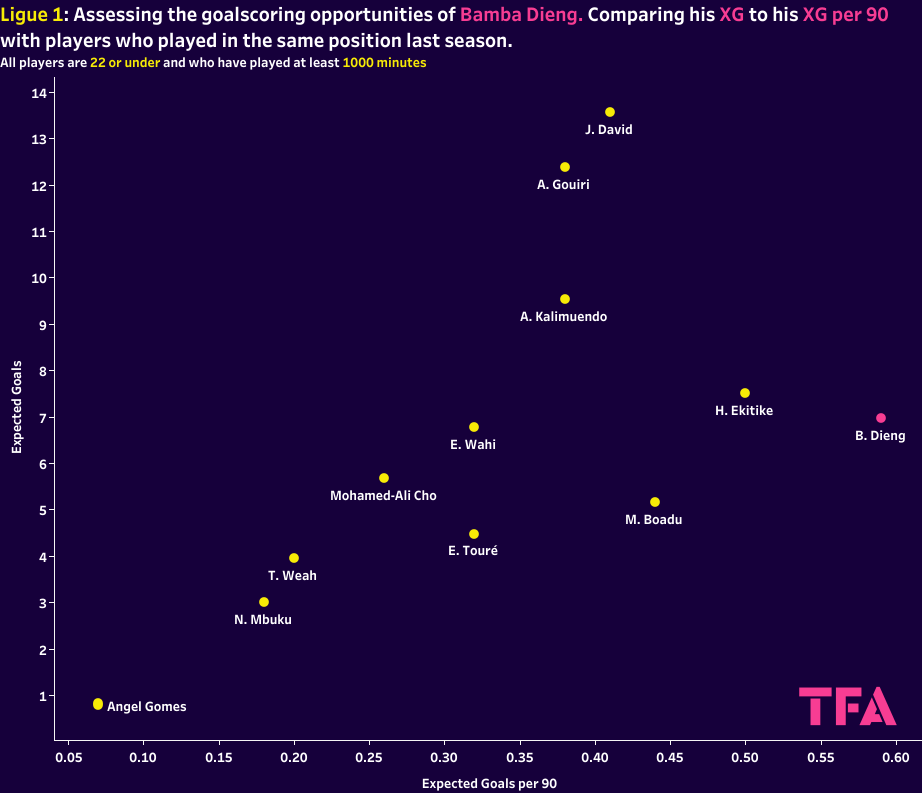 Marseille is a team that creates goal-scoring opportunities, and as they were the second-best team in Ligue 1 last season, it is expected that the forward players will get good opportunities to score but is reassuring that Dieng is getting into the positions to be the player that gets on the end of the chances created.

The first two data visualizations show both positive and negative aspects of his finishing ability. The next data visualization is focused on assessing the goals he scores compared to the players in our targeted area. Overall, he scored seven goals. As one was a penalty, he scored six non-penalty goals. The analysis shows he was the sixth-highest goals scorers in his age range. You can see below how Bamba Dieng finished second to Hugo Ekitike for the amount of non-penalty goals he scored per 90 minutes, finishing on 0.51 per 90. 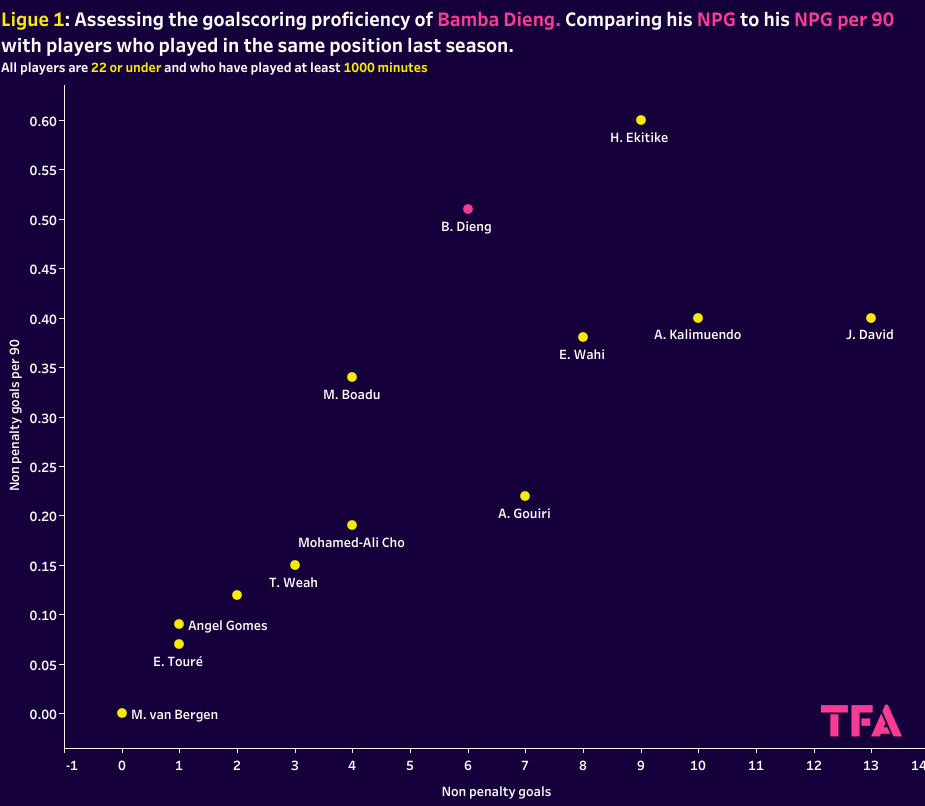 Exploiting space in the attacking third

One of the key attributes of his game is his pace. However, a player’s pace is not beneficial unless he knows how to use it or knows how to get in good positions for it to be effective.  One key aspect Of Bamba Dieng’s attacking plays is how well he exploits space in the attacking third.

Whether it be out wide or through the centre Dieng shows good awareness to get in the required position and excellent anticipation to be able to attack the space.

The image below shows how he positions himself in between the right back and centre back of Rennes. The cross is swung around the Rennes defence and into the area on the edge of the six-yard box but towards the near post.

It is at this point Dieng checks his run and cuts across Rennes’s centre-backs and attacks that space. As he anticipates it there is nothing that Rennes can do to stop the opportunity. Dieng scores from this passage of play. 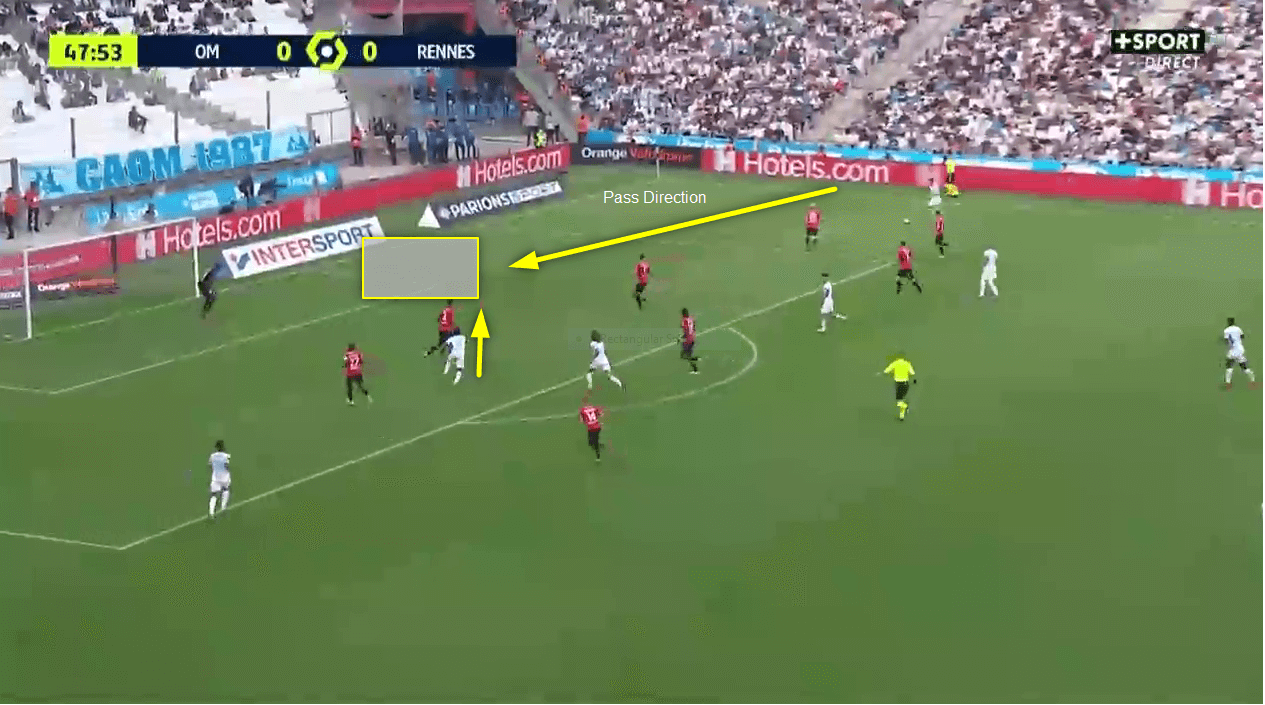 The next two examples show how good he is at creating space out wide. When playing as part of the 3-4-2-1 formation that Jorge Sampaoli implemented at Marseille, Dieng was usually employed as part of the two behind the striker which was usually Dmitri Payet playing a false 9 or Arkadiusz Milik playing in his usual centre-forward role.

When playing as part of the two, you were responsible for picking up good positions and affecting the play in the half-spaces and wide channels on your side and being able to move between the two to create space in the opponent’s defensive line. You can see the positions Dieng takes up and the movement he makes to be able to attack the space behind in both images. 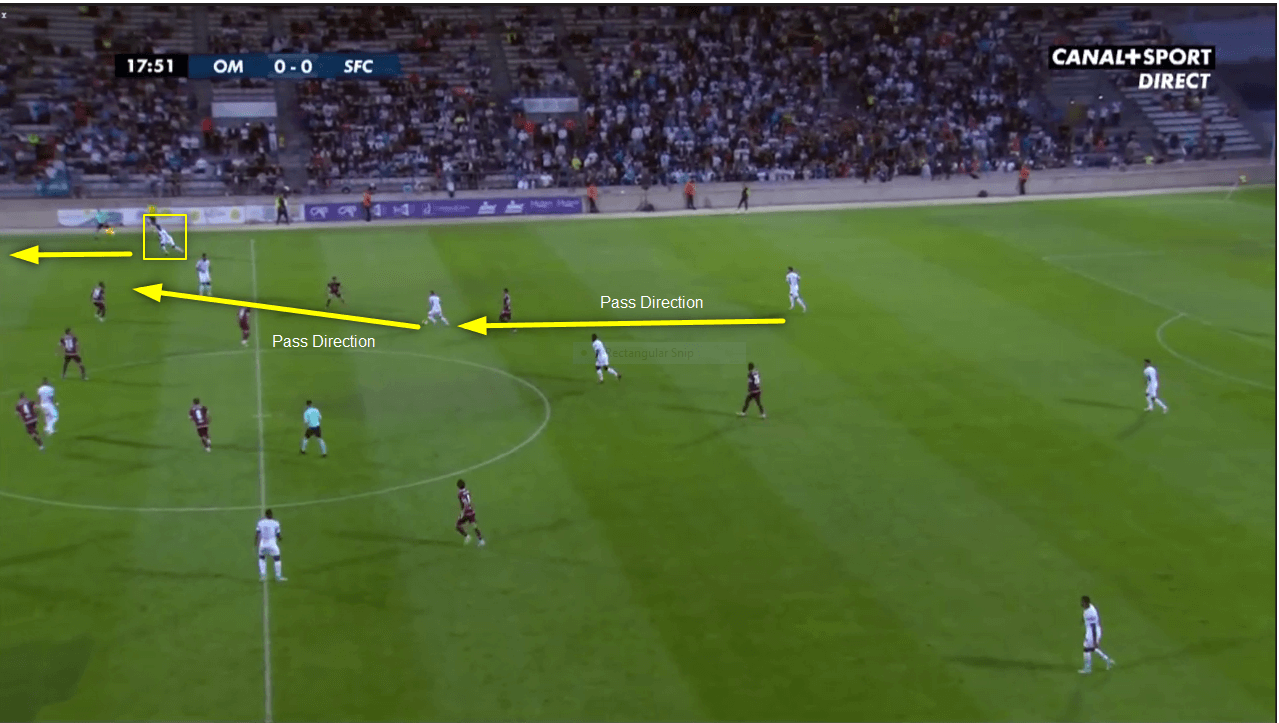 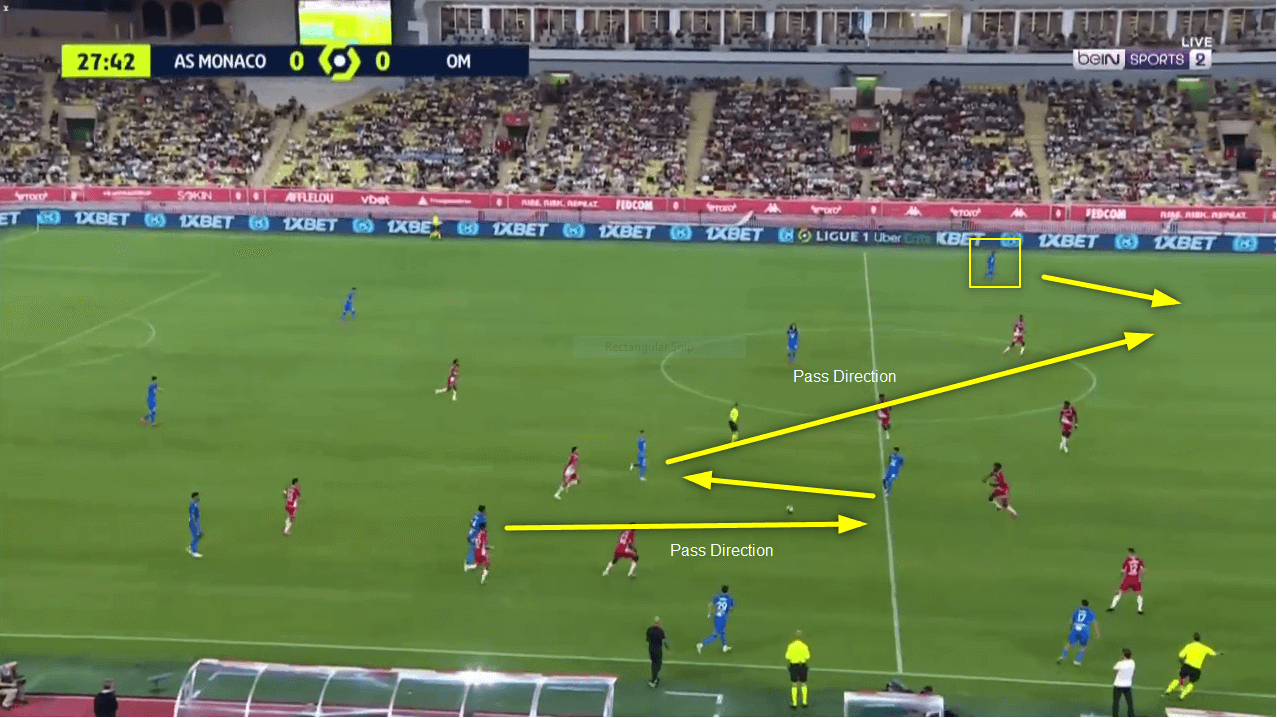 Although we have shown analysis showing how likes to shoot when the opportunity arises, Bamba Dieng isn’t a selfish player. Playing for Marseille and within Jorge Sampaoli’s positional play philosophy determines that you must be able to make key passes and pick out your teammate’s movements for the approach to work.

The role that Dieng played with Sampaoli’s approach was he was used was fundamental to the teams attacking play. The movement from the two-player behind the front attacker is essential in moving the opposing players from their defensive shape, and once happens their ability to pick out the right pass is important for the team to take advantage of the situation.

These two examples who Dieng pulling over to the right channel and stretching the defensive lines of Reims and FC Lorient, but then having the vision to pick out the space to pass to meet his teammate’s run. 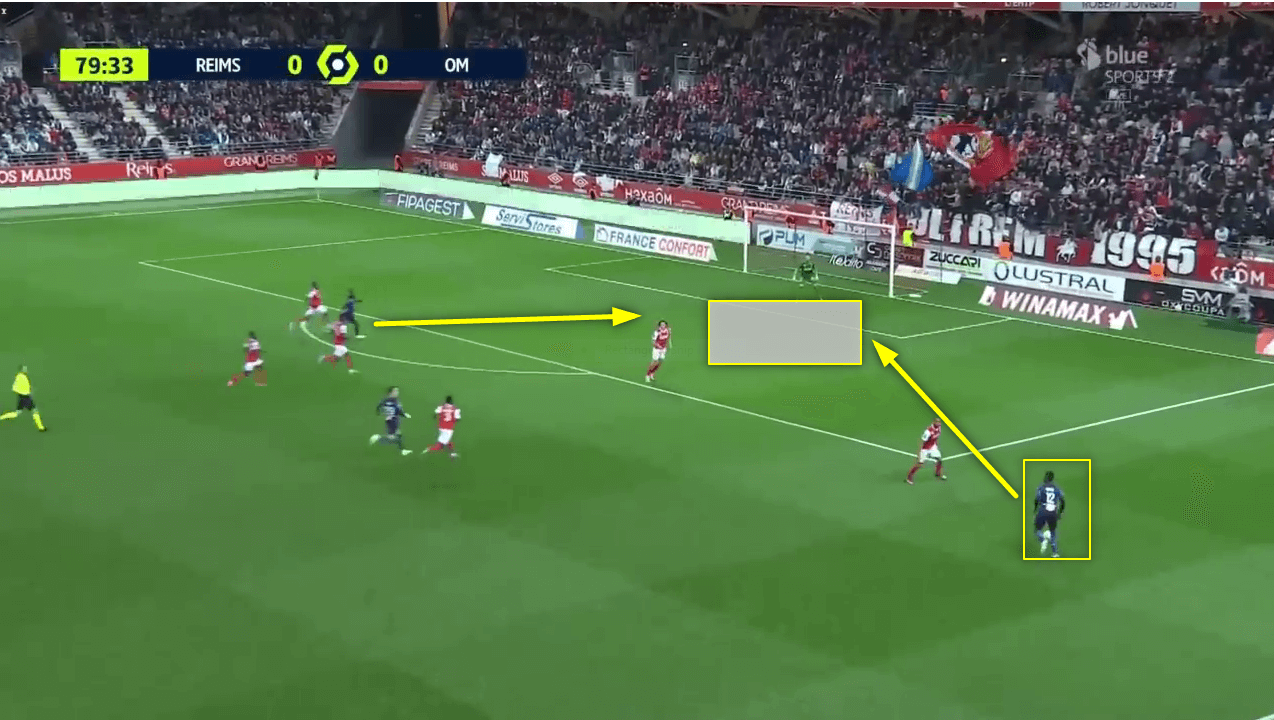 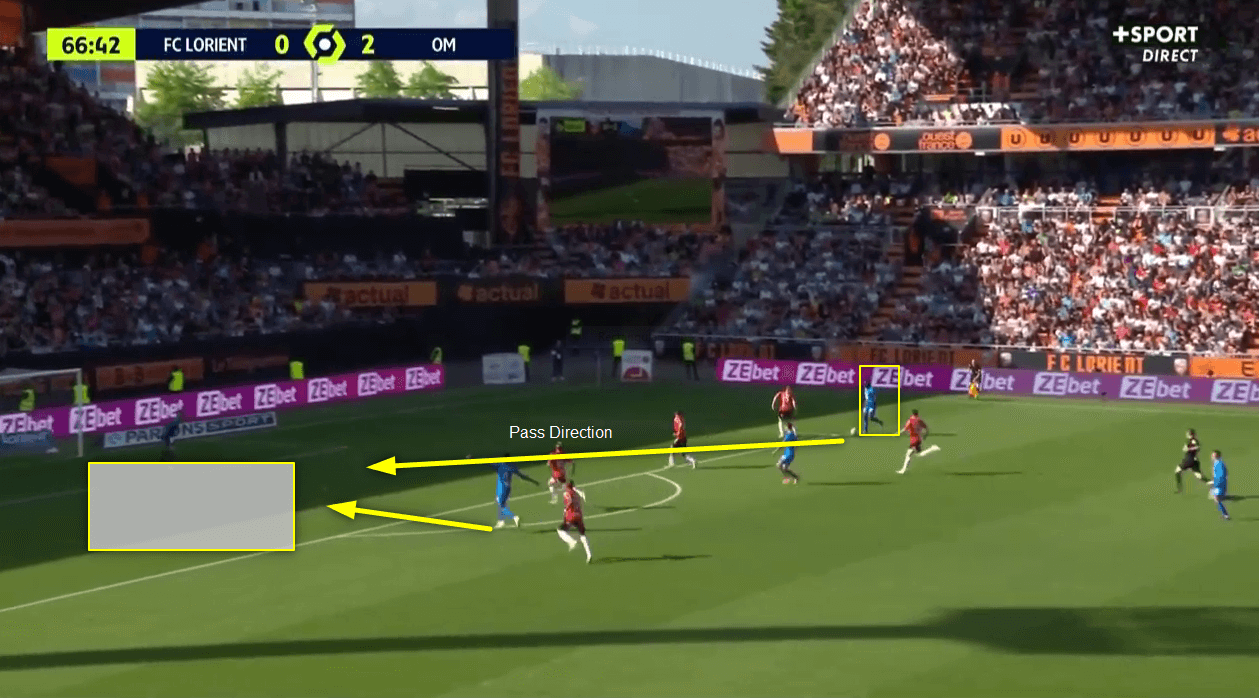 The attacking players being able to defend from the front and being able to close quickly and intensely is part of modern-day football.  Now that Igor Tudor has taken over at Marseille, it will be even more important than it was last season under Sampaoli. Under Sampaoli Marseille enjoyed controlling the game through possession, and teams who are set up to want to keep possession must win to be able to win the back immediately. Under Tudor, the team is reliant on keeping possession and they play more quickly with more verticality and look to attack through quick turnovers in play. This means a lot of pressing from the players.

Last season Dieng adapted well to the side of the game. His work rate was excellent and his ability to press the play was good and well timed.

These two examples against AS Monaco and Angers SCO and good indications that Dieng is suited to play a role in a team that presses high up the pitch and sets pressing traps. Both images show two different examples of pressing within Marseille’s defensive structure.

In the first one against Monaco, you can see how the team is set up to allow Monaco’s centre-backs to have the ball, once the ball is played into wide areas Dieng immediately closes down and stops the play from progressing. The ball is played back to the centre backs afterwards 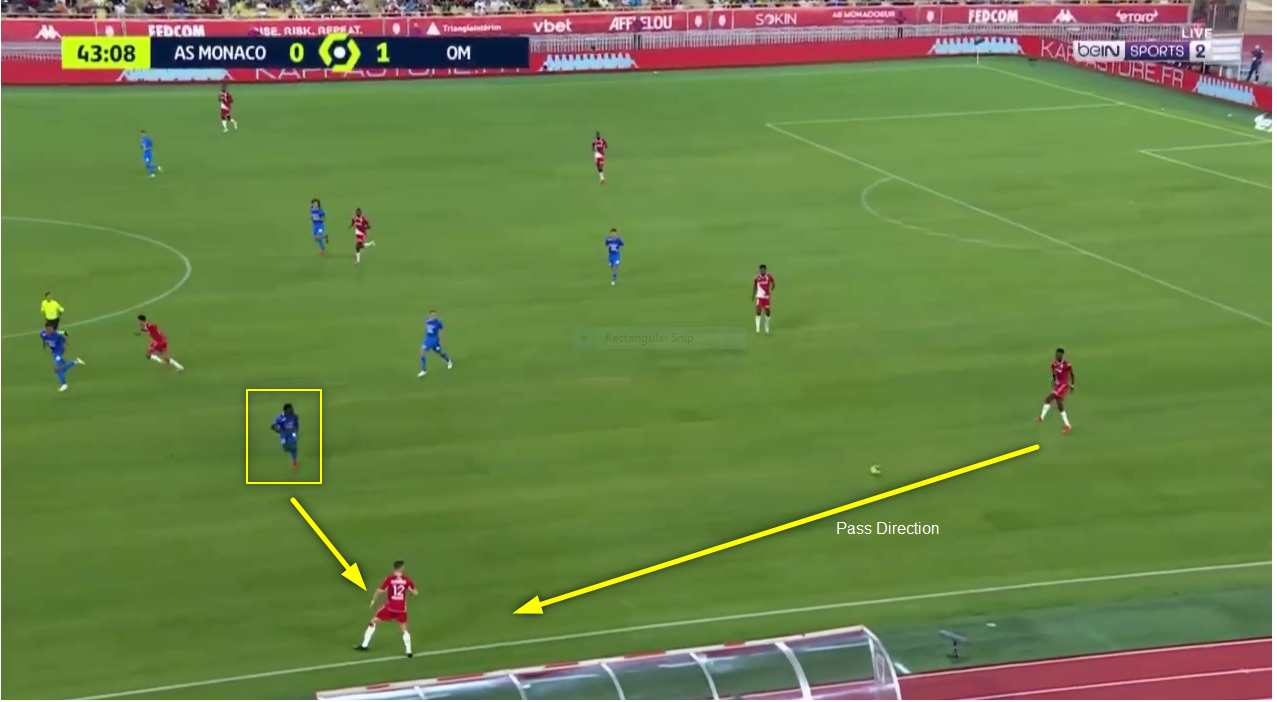 The second one is set to immediately close the play once the Angers player takes his first touch inside. This triggers Dieng to press to win the ball back. If the Angers player takes his first touch on the outside Dieng would likely hold his position. Instead to protect the pitch centrally but also recognising it’s a good opportunity to transition quickly and force the team backwards, the press is applied. 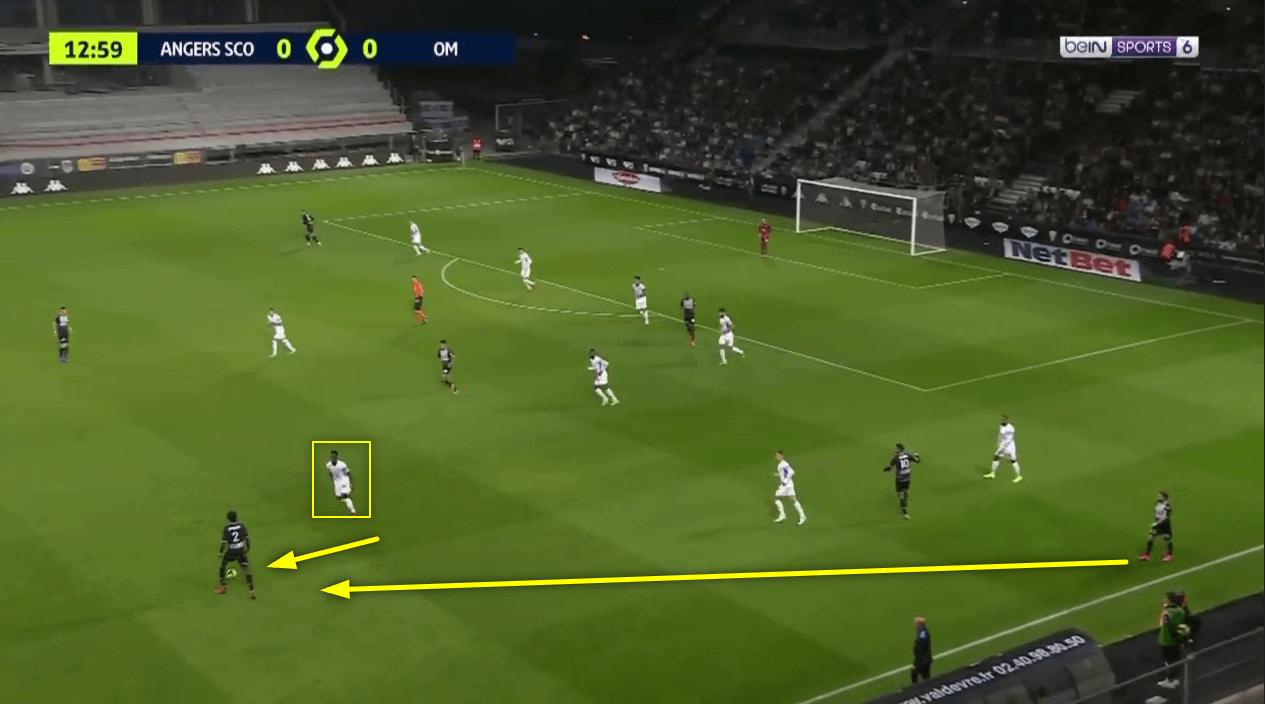 As Bamba Dieng is from Senegal and is making the first impact of his career at Marseille, the obvious comparison to Didier Drogba is expected. However, after compiling this analysis, his style of play has more notable similarities with the style of play of Sadio Mane. His ability to be effective across each area of the attacking third, his technical shooting ability and his movement across Marseille’s attacking line make him more similar to Mane.

The next stage of his career is getting more minutes on the pitch and more regularity with his appearances. His attributes and traits are well suited to a team that looks to play through quick transitions and press high up the pitch, although last season he showed that he could be effective when playing for a team playing with a positional approach that relies on good movement.

In this scout report, we provided data analysis and tactical analysis to identify the key components of Bamba Dieng’s game last season. We have shown the strong tactics within his attacking play, along with other aspects that have contributed to his overall performance.